A nice stew of great ideas that messes all the spices up and ultimately tastes terrible.

Warlander looked pretty good until video footage came up. The combat looked mediocre but I was willing to believe it would be ironed out on release and give us a really unique blend of mechanics – you can aim your cuts like Metal Gear Rising, have a stamina-based, slow-paced melee combat system with quite some abilities available and it all plays in arenas which are randomized through a map route of levels, alas Slay the Spire. A mix of rogue-lite and action combat that sounded great but plays so poorly and has such clunky controls that the experience is simply not fun to play – the cardinal sin of a video game.

There is barely to begin with and the core of the game is the gameplay, to the point that the story has no time to be remotely fleshed out (the fact that the game is roughly 1.5 to 2 hours long also does not help it in any way). You play as a great warrior, Bruce which is given at the start a sword that contains great power from the forest, guarded by a God. Through conversations between Bruce and his sword and quite a few text logs, the story and lore flesh out further but it’s also pretty generic writing at the end of the day and the awful gameplay completely removes any interest the story could provide the player. 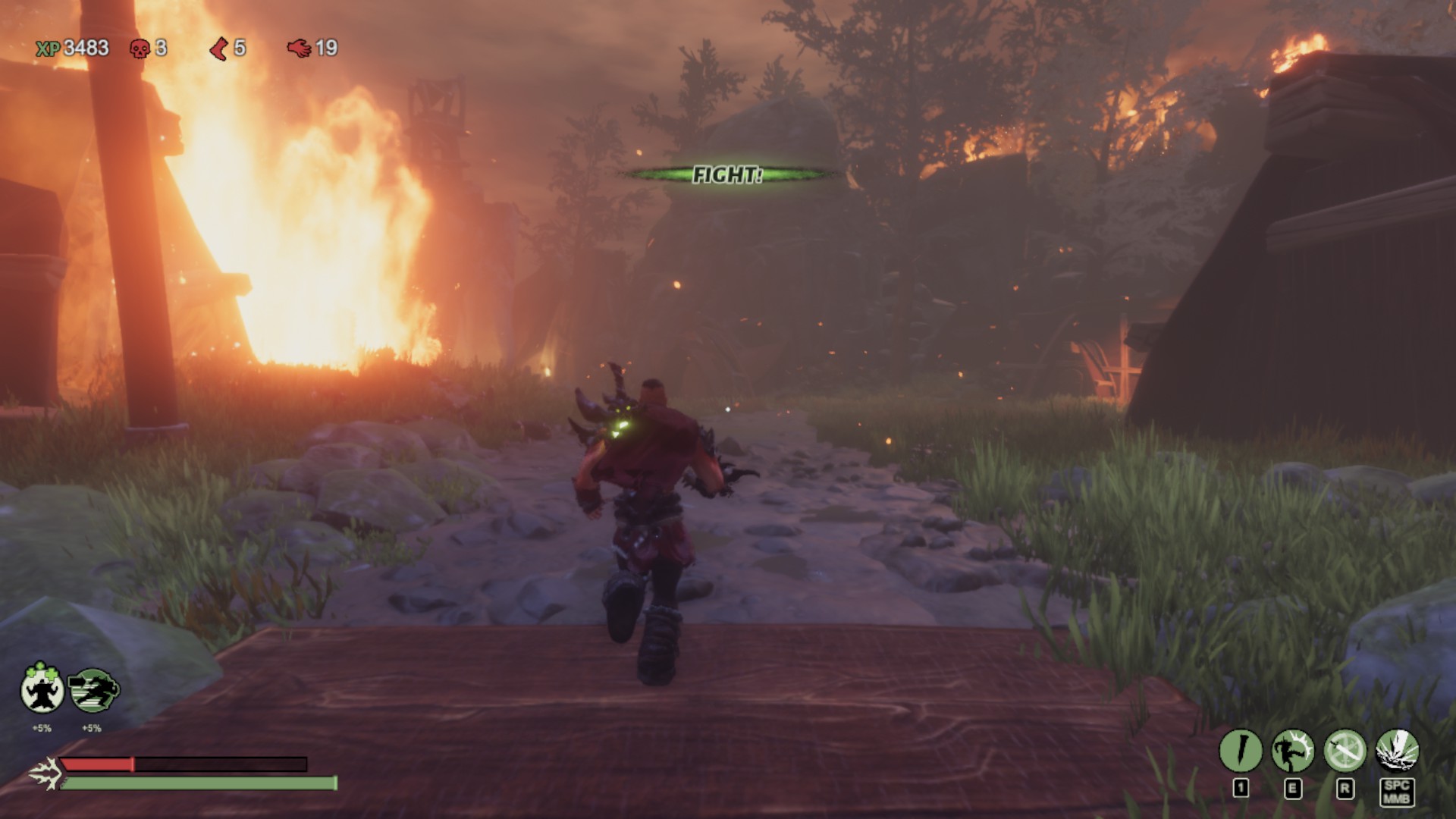 Both the core and the weakest component of Warlander, the game plays through a sequence of randomized levels, connected between each other – all presented in a map, exactly like something you’d find in Slay the Spire. You can pick what level to play if the path separates and then pick it carefully.

Do you need healing? Maybe pick a resting site as your next level.

Want to risk your life and try to get a nice upgrade? Pick a boss fight level.

Not all level choices are like this, as the game does, in general, a decent balance between resting and upgrade levels and combat/boss sequences. The main problem of the game is the upgrades and the combat: the first component has nice ideas but is ultimately boring as it’s all just upgrading yourself by 5% to something – move 5% faster or have 5% more stamina… There’s no creativity, no build viability to anything, no synergies or combinations between mechanics and abilities so the upgrades, while nice, are a very dull component of the gameplay. As for the combat, it’s all a mix of clunky animations, unresponsive controls, weak AI and poorly responsive melee combat. The main problem with the game is that there is little tactics to anything, enemies just rush at you and attack while you try to carefully aim your sword to attack the non-armored parts (a really cool mechanic, may I add). But that’s all they do!
I had a boss fight against The Steward and all he did was spawn mobs, teleport and shoot a REALLY slow-moving orb that I could literally walk to the side in order to dodge – it’s like it wasn’t playtested, honestly. You kill the mobs in one hit, dodge the orb and spam him until he’s dead. The problem is that on top of this, your movement is really clunky as Bruce can’t even respond to your A-D key movements: if you go left and suddenly go right, Bruce will stop all movement for a second before starting to move to the right and it’s one second too long in a game where enemies deal massive amounts of damage so the fluidity of movement should be the absolute key. The dodge is also painfully short so you should be hit even after dodging if collision mattered (you don’t because of the i-frame Gods).

The biggest problem of all this is that in your small playthrough, the game is all combat and a couple of minute stops to upgrade… and that’s it. When the core of your game is fundamentally unfun then it all breaks apart and all the good ideas around the game, such as the cutting system (it feels really nice alas Metal Gear Rising), the abilities being really creative such as using roots to grab enemies and throw them around or throwing your sword like a boomerang. There’s just so many good ideas and such poor execution behind it that the game is a chore to play through and on top of that, it’s meant to be played multiple times on higher difficulties… and I just couldn’t stomach it much more by the end of the first boss…

Abysmal port first of all. The main menu UI is broken, especially for controllers. You cannot apply graphical settings and it kept resetting for me, after extensive testing I found out the only way was to click on a separate subcategory of the options menu – only then it applied the graphics changes. Scrolling through the resolution is also very unresponsive, I had a hard time clicking on the desired resolution for some reason so I feel the menus need some changes.

While the art style is quite nice, most of the enemies look generic and boring and there isn’t much variety to the overall look of the levels from what I played (it’s a rogue-lite with multiple playthroughs, I may have had bad luck on the level rolls). The game also runs terribly and has no graphics options to speak of. You can change a single overall option from Poor to Fantastic…

Anyway, audio is far better with a pretty decent soundtrack and responsive sound effects to the combat, though I’ve had some sounds being muted or really low volume such as The Steward’s orb shot attack which didn’t trigger any audible sound from what I could tell (and he shot a lot of them).

All of it completely ruined by terrible gameplay, abysmal length and uninspired story paired with awful performance. I still recommend you keep an eye in case the game gets a good patch to fix most of the gameplay issues, if so I have no problem recommending the game at full price.

As it is… avoid it unless dirt cheap.