This action platformer roguelite has power armor and big plans

Somewhere in the distant future a row of archival bots click and whir together in unison, tracing the great history of entertainment from civilizations long gone in a symphony of successful entries and sorting. One machine stands against the rest with the pleasant chime and clatter of an error; this machine is in charge of cataloguing GBA era games. A small translucent strip is extracted from the machine. It reads: ERROR 765-0XCF—- Metal Unit: possible release date unclear. Art style: fitting of the era. Music: pleasant. Sources extracted: inspired by mechas, anime, action platforming, Megaman Zero, Castlevania, and roguelites. Conclusion: Incongruous. 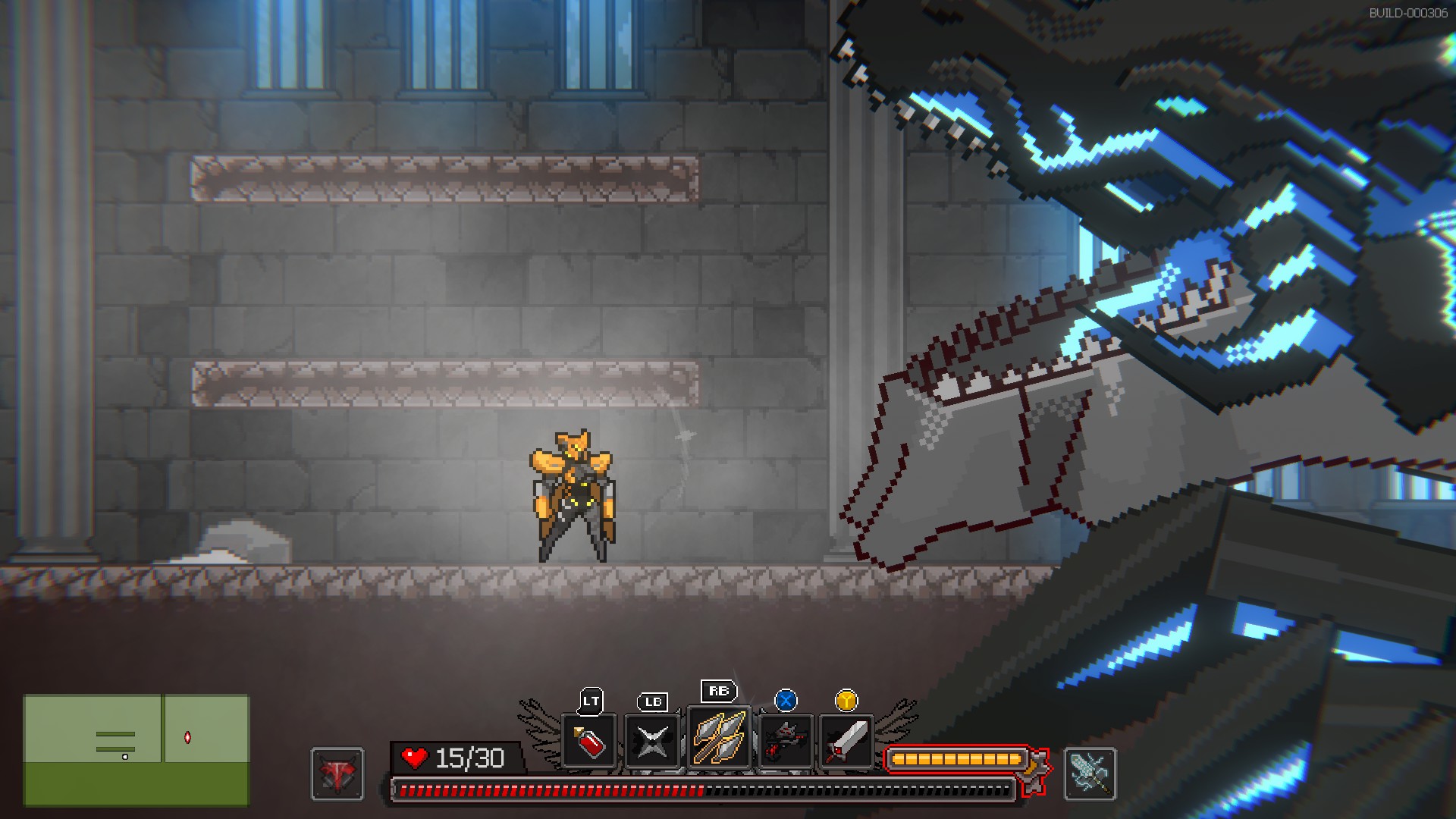 Zero has been resurrected

Metal Unit is a very stylized bit of action and platforming all set in front of an anime backdrop rife with betrayals, imposter syndrome, mysteries, and skin-tight clothing. Joanna is a new recruit that has to don her power suit in order to fight off aliens and underground monsters. 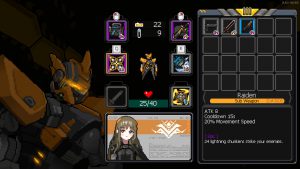 It’s an interesting mix for sure, but the immediate reference in style and base gameplay could be the classic Megaman Zero franchise: players will be dashing and jumping past traps or through enemies and gunning and cutting away at robots with a variety of weapons and skills. In fact, getting fully equipped makes players a formidable onslaught of explosions, dashes, and lasers. The pace and action feel great and fit the style.

Joanna can use up to 6 forms of offence: she has a ranged weapon, a melee weapon, a sub-weapon, an add-on, an ultimate ability and an accessory. The capabilities all depend on what kind of loot Joanna manages to pick up from chests, defeated enemies and the two kinds of weapon shops available: one found in levels that uses gold and the other that uses a rarer currency called Crystal Cores that are mostly earned after beating an area or dying. The rarity drop is very generous and certain bonus rooms will guarantee high tier gear upon completion. This game wants you to dazzle with explosions and lightning pouring out from high tier equipment. 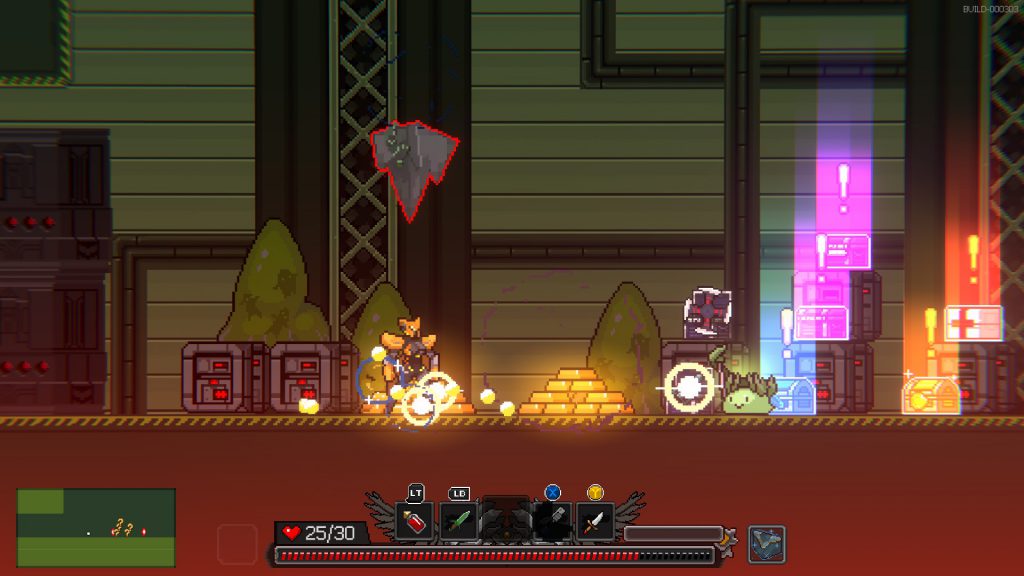 Metal Unit packs quite an arsenal. Each of the 6 slots available to equip have a great variety of items or weapons to equip with more getting added quite frequently. The weapons themselves also have different feels, as well as 4 different grades of rarity starting with common and ending with legendary. What’s great about the weapons is that the different weapons offer different play-styles so even finding something like a common spear might be worth dropping your rare sword if you prefer the AOE control that spears have with their sweeping strikes. The weapons get even more stylish at the legendary level: not to spoil anything, but it’s possible to find a secret sword that grants Iaijutsu style sword drawing complete with the glint as the blade is unsheathed. 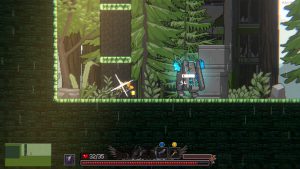 Although the two primary weapons are fun in their own right the other bits of equipment are just as engaging. For sub-weapons think of Castlevania, but without hearts: these weapons will have interesting effects or patterns but are limited by a higher cooldown than your main weapons. The add-on slot has a missile icon, and though most are missiles that lock onto targets when you fire your ranged weapon or use your sub-weapon, some addons power up your stats or deal bonus damage after chaining a few hits with your melee weapon. 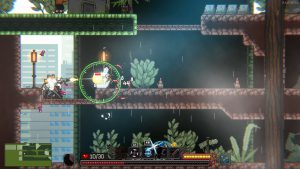 The accessory slot can give extra hp, add damage to your dodge or freeze enemies that attack you. The ultimate abilities are powered up through combat and often unleash a large AOE attack. You might have a high powered sniper rifle, but if your missile pod has a really low cooldown you would be better off wielding a machine gun and a sub-weapon that freezes. This mixing and matching of weapons feel great even in the games current state, and combat has a great pace between dodging and chaining hits. 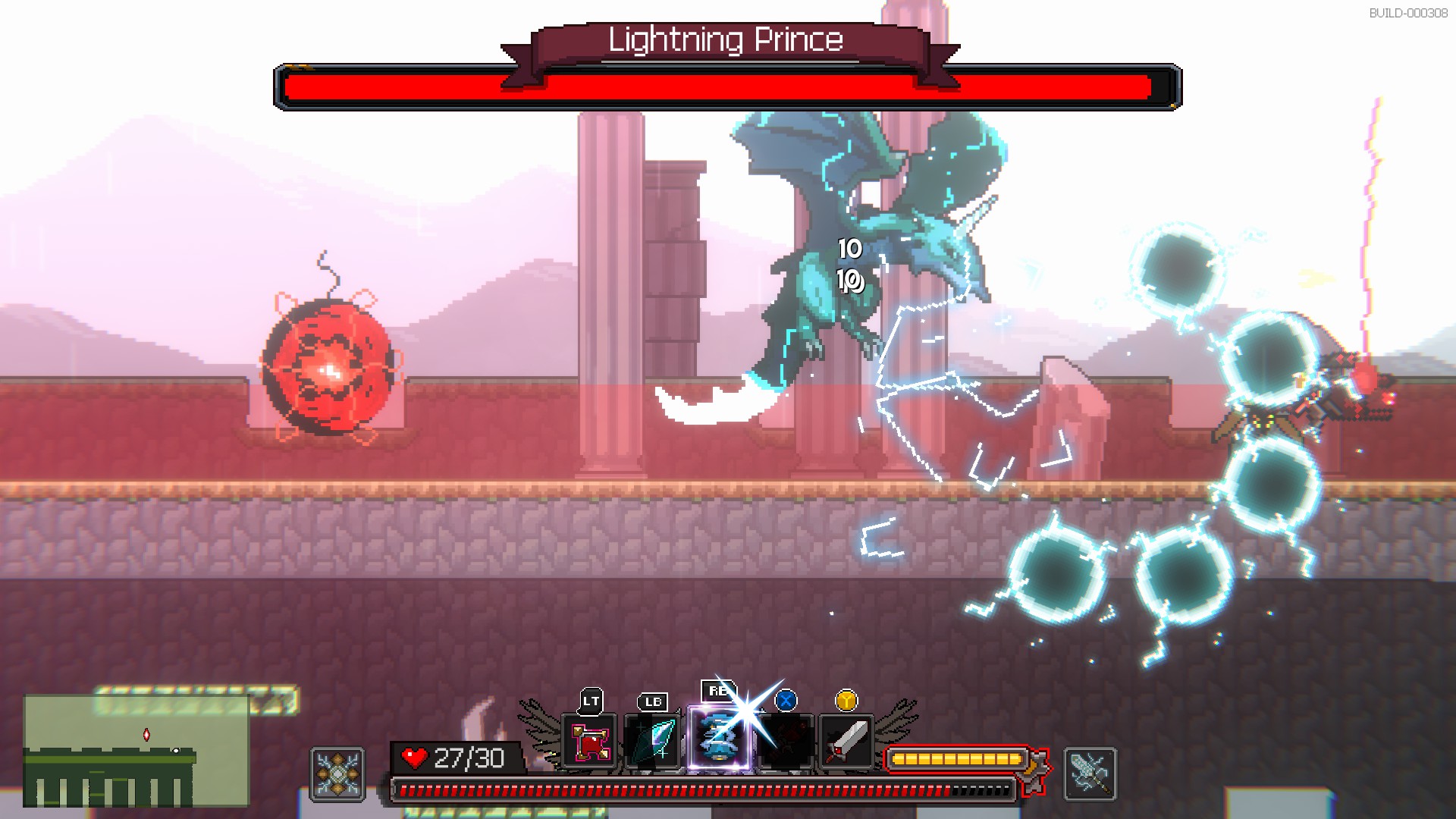 Levels, enemies and bosses feel varied enough currently. There is a mix of fantasy-based enemies like golems or dragons, even cute sword-wielding slime are here for some reason. In addition to that are the aliens and robots. If they manage to add some werewolves at some point Metal Unit could hold its own against Castlevania or Secret of Mana in terms of enemy variety. On that same note, I don’t feel like Metal Unit quite manages to have a distinct enough style to pull all these different enemies together, it’s a small gripe, but I have so few that it’s worth a mention. The bosses are similar where one looks like an anime but the other looks more like it belongs in a fairytale. 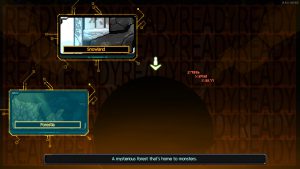 Outside of the tutorial, there are only two areas to explore currently, with a third quickly on the way according to the roadmap. The environments are well done in terms of style and the traps and layout make sense. The one part that is lacking are the secrets: technically you could call the handful of areas “secret,” in this game but they might as well have a giant arrow painted on them, and because levels are not procedurally generated you will know where they are each time.

Despite not being procedurally generated, I still managed to be surprised by new areas after a few playthroughs. A playthrough goes as follows: a few stages of fighting (possibly a secret area), then a camp to shop at and either rest or do a bonus dungeon with the promise of a good weapon and full health at the end, repeat two more times, and then the big boss fight. After beating the boss, or dying at any point in a run, you will be teleported to the hub area. 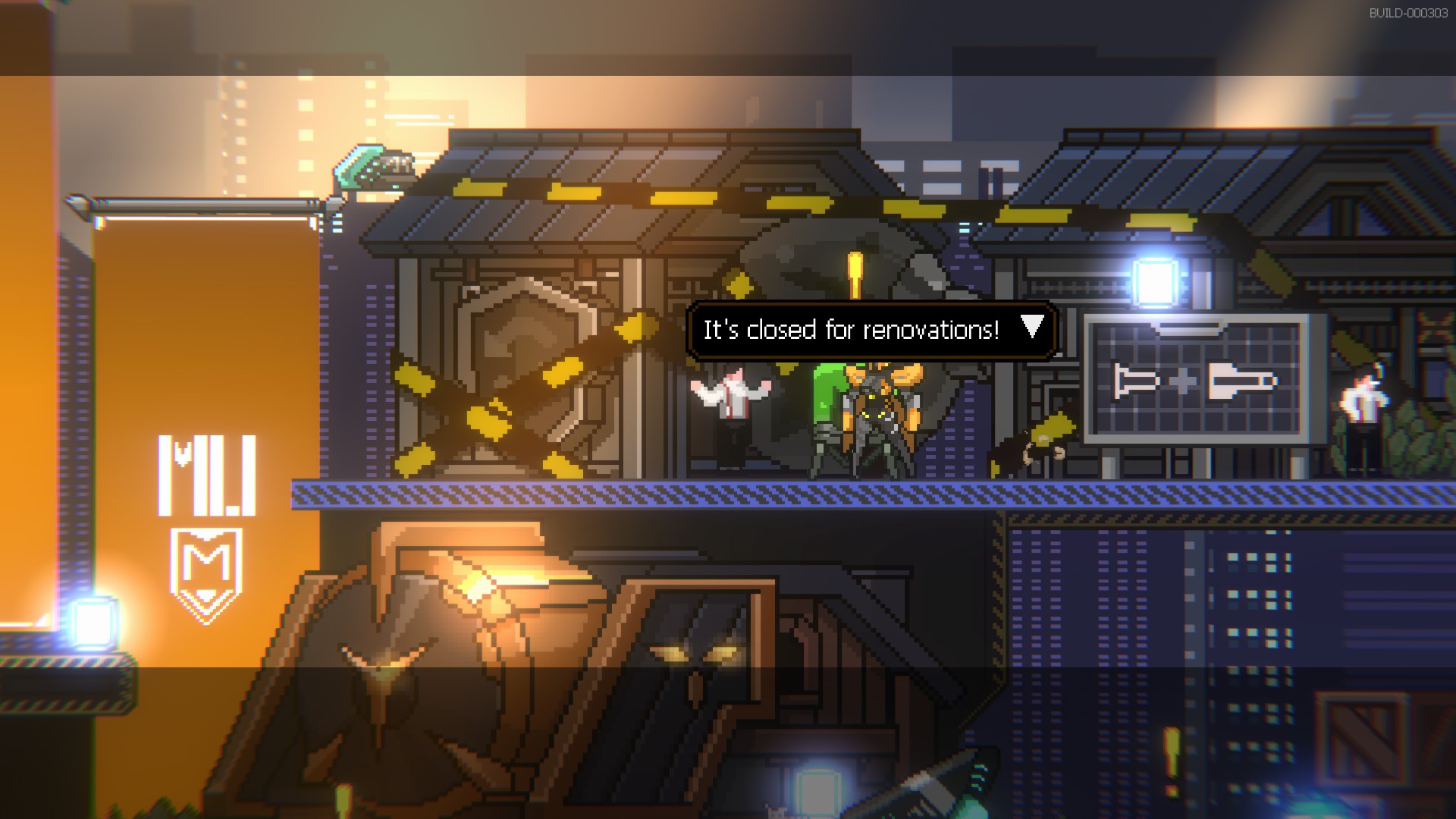 The hub area is where players can drop off hard-earned Crystal Cores in exchange for upgrades or items. Not all shops are available yet, but players can currently nab some utility or defense upgrades in addition to buying items like health potions or weapons. The weapons are the worst investment as good weapons are found easily in levels and you lose weapons on death anyway. Currently, some of the prices are a bit mismatched: you can make Joanna tanky for cheap but just a little bit of damage increase will take quite a pile of cores. 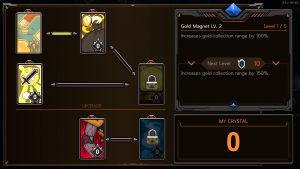 The persistent unlocks so far are shaping up well, but there is an even bigger commendation here. Usually, this part of the review is where I bring up the lack of content or how you should cautiously wait for an Early Access title to grow more. This is strangely not the case. About a week ago there were no upgrade shops and because of that progress didn’t feel rewarding. Then the devs made a roadmap, and then they executed it. There were two content updates in the last week that added progression and they have a few more planned that will include another area. This seems like one of the rare Early Access titles that plan on seeing the light of day.


If I have one complaint outside of an inconsistent or weak cohesion of style, it would be some of the story elements. It feels rather melodramatic at the moment, and it really feels like some anime in that sense. Maybe when the story is complete it will come off better, but currently, there is no nuance or subtlety (see: the secret areas). The store description says that dialogue and action choices will affect the story, but that was not implemented during the time of this review. On top of that, I’m not sure why Joanna’s Buxom avatar has to heave with each breath on the menu, but it’s one giggle away from being too cringe. 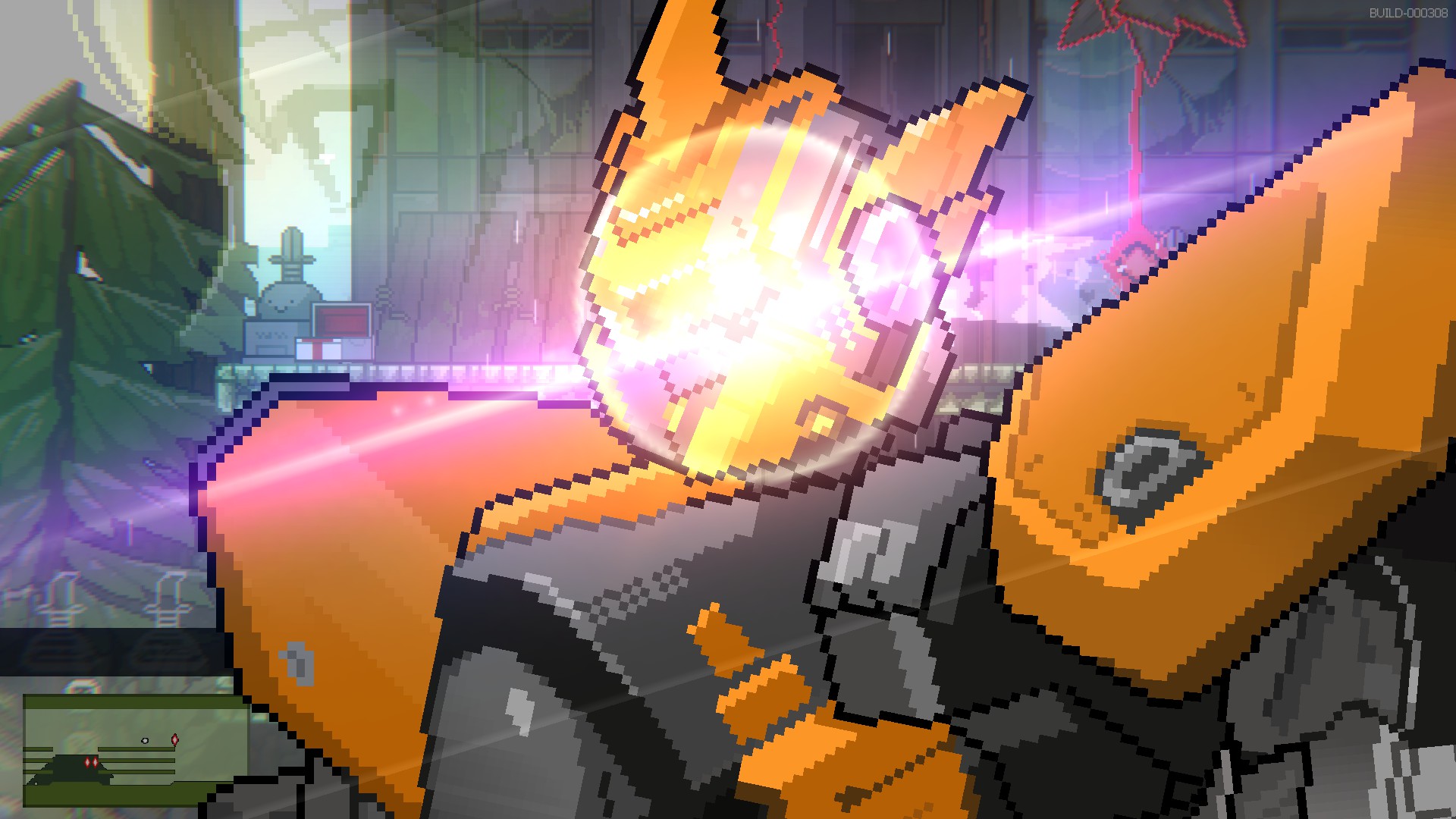 If the idea of action platforming with some roguelites sounds appealing to you this game is worth picking up. If you want to dash through enemies while launching an Itano Circus while summoning a helix of glowing chakrams, then this might be your only option. It’s stylish, action-packed, and with very active development.