Become a bootleg Jedi with all the power of an industrial fan.

The dev sent us feedback for this article and wanted to stress that despite being in full-release it is still an ongoing project. Our reviewer could only report on the version in front of him at the time, so we’ve added the dev’s comments in blue and you can judge for yourself.

One thing we can say for sure is that he seems very eager and dedicated to his work, so the outlook is promising.

“As the only developer, I wanted to create an ideal environment for people who want to cut everything, with satisfaction using virtual reality. I think it worked out perfectly. However, creating a story around the game takes time. Early Access, in my opinion, unfortunately, is used by many creators as a marketing ideology and no way guaranteeing players that the game will be updated. So we released the game in a state requiring continuation, but the goal of cutting everything has been achieved. The game you have already tested is different from the one that is now, I have released, with the help of players, few major updates that basically close most of the problems you mentioned. The game will be developed further and I am happy that the community helps me so much.”

Sword Fighting in VR always sounds like a blast, at least when you aren’t just waving your hand around like a dingus as you melt your enemies. A lot of games nowadays tend to have a very impactful combat system, like ‘Gorn’ and ‘Sword and Sorcery’, yet Saber Fight VR is different. Instead of opting for impact, you’ll be slicing clean through your enemies, leaving a nice, hot, melted scar on the object you’ve just decimated. Better yet, this is a dynamic system, meaning you could slice something every which way and it will sit there and let you. But, a cool system aside, what is the gameplay like? 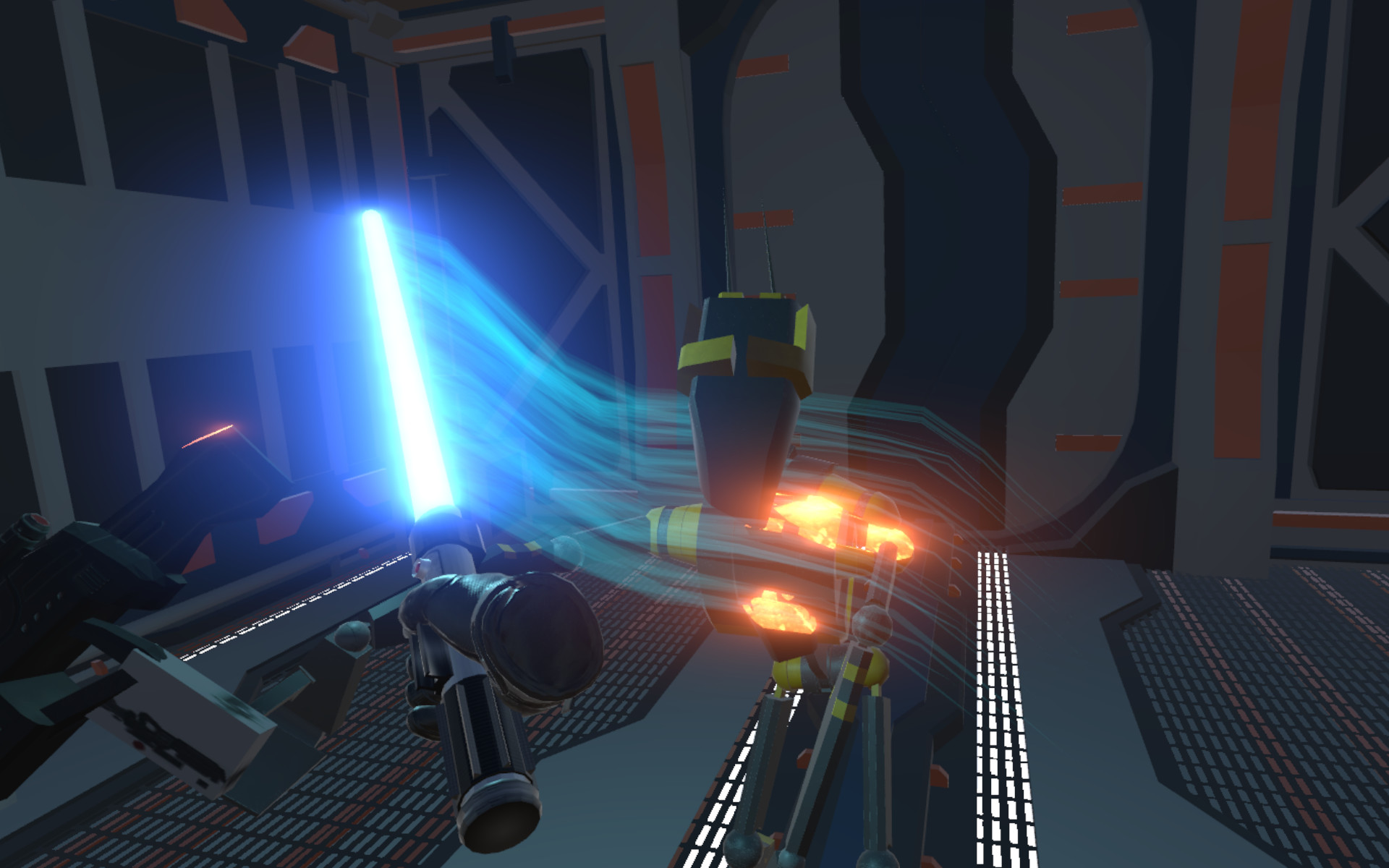 Saber Fight VR is a very straightforward and incredibly simple game, focusing on only a few gameplay aspects and trying to make a whole game out of it. You’ll be running through random facilities fighting drones, turrets, and humanoid robots. To take on your ferrous foes you’re given a ‘laser sword’ (which totally isn’t one of those ‘sabers of light’ things people keep going on about) and the ability to push your enemies away with force…. sound a bit familiar?

Jokes aside, it’s very evident that there’s a load of inspiration taken from Star Wars, which was appealing to me and can assume would interest plenty of other people. The fantasy of being a Jedi on a rampage is something kid me would be drooling over and, with the power of VR, could easily become a realization. Saber Fight provides this to an extent, although with more of a pace of a Jedi training exercise rather than a full-fledged assault. 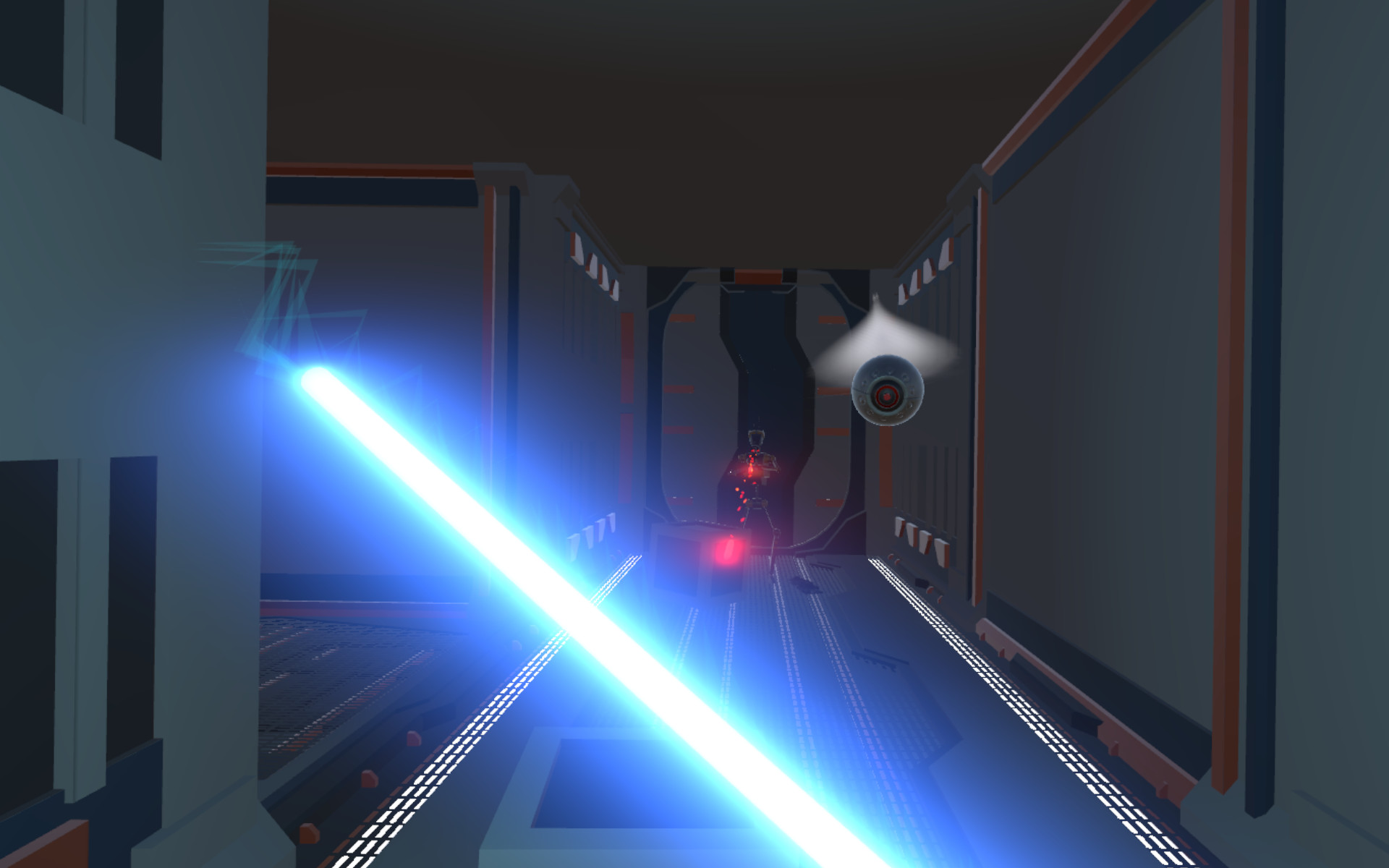 I’ll admit, I had a blast the first few runs I’ve had into this game. Whether it was the idea of running around slicing things to bits, or messing with the robots with force pushes, I genuinely enjoyed myself. But that enjoyment quickly turned into tedium as the game’s flaws became more and more apparent with each sword throw and force push. The most glaring problem is that once you’ve played one level, you’ve seen most (if not all) of what the game has to offer you.

“Most VR fighting games (including mentioned GORN, Blade and Sorcery) are played on several, always the same arenas (levels). The comment contains unsuccessful expectations of diversity at every level built on the vision of their random generation. That might be cause that the game is building higher expectations, but on’t worry, it’s a matter of time when game will be presented in different areas as well.”

The level design and (to an extent) variety is the most important thing in games for me, which makes the lack of it in Saber Fight that much more painful. There’s nothing cool to look at in this game, the rooms are comprised of very sterile colors, dull grays/browns with the only objects to interact with being a pile of boxes, some weird… tube thing, and some other inconsequential junk that looks more like mere shapes mashed together than anything. That said, I will give props to the developer for making somewhat interesting-looking enemies, even if you will be seeing them more than you’d like.

The combat itself can be quite enjoyable, and it seems that what Saber Fight is capable of is fairly entertaining. While the combat itself is simple, walk up to enemy and slice, the idea of cutting clean through and cutting the thing in half will always be a joy to see. Which is why it’s so irritating to me that the cutting itself only functions half the time. If you cut at an odd angle or you don’t have an entry and exit, your sword turns off and the object remains intact. If you aren’t clean and precise, this could result in you getting blasted by the turret you could have sworn you cut in half.

You’ve also got the store brand equivalent of the force push, allowing you to blow objects and enemies away with your off-hand. This is one feature I hate using and hate myself every time I use it, as there are no cooldowns and can be used as frequently as possible. In a bind, you can easily push all the enemies into a corner as they shoot their gun into the wall and you can waddle on up to dice them up.

“It’s not true, the only opponent you can move with power are flying drones that are still very resistant to shifting.

Finally, you’ve got the saber throw, taking your precious sword (and your controller) and chucking it across the room in hopes that it cuts off some robot’s arm. While the idea seems nice, in practice it turned out to be quite a mess. As mentioned above, if the sword doesn’t cut cleanly, it does nothing and shuts off, and this is very, VERY evident any time you choose to throw the thing. It will collide with an enemy, turn off, and fall to the ground leaving you defenseless. 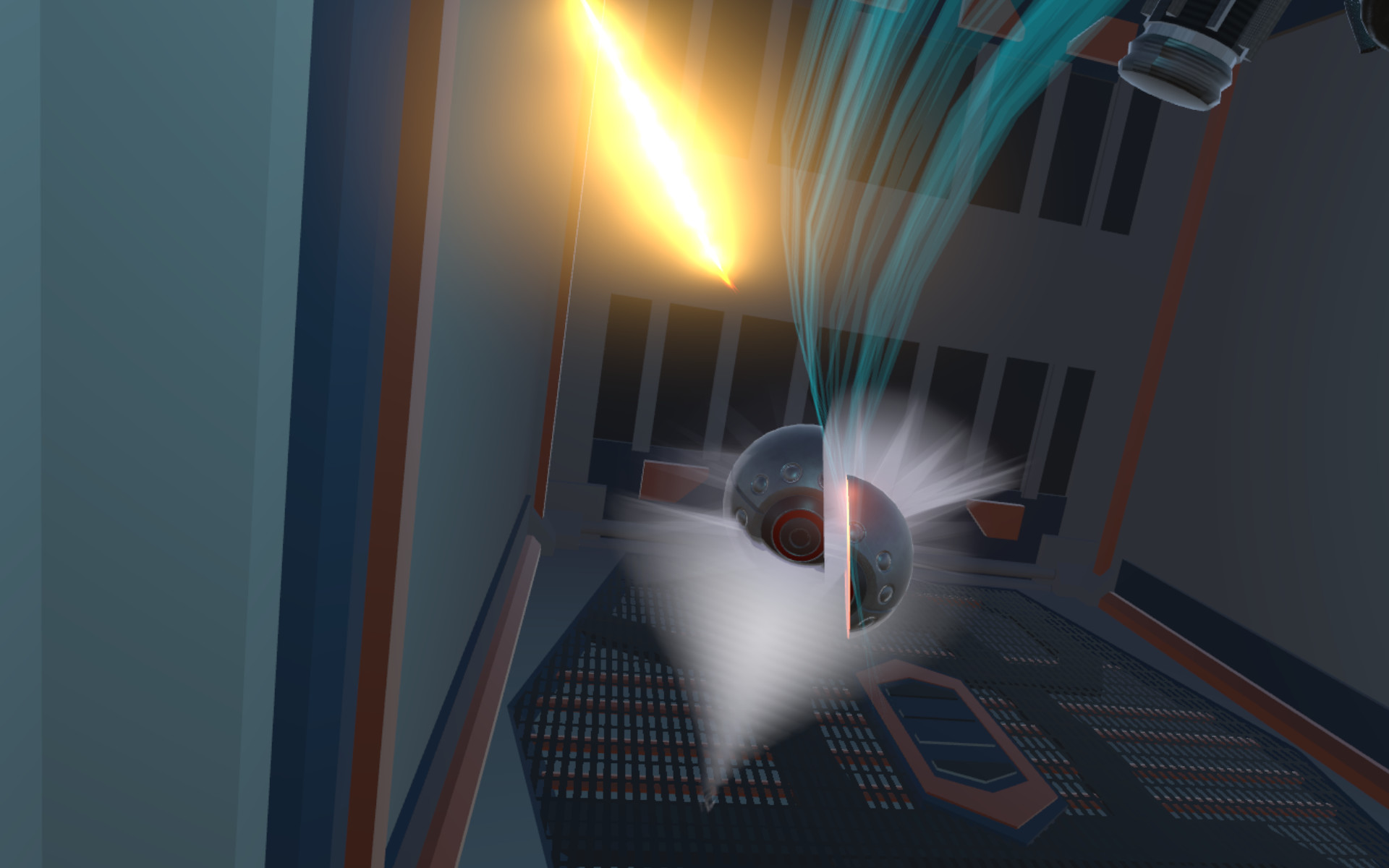 Yes, on top of running down a string of rooms slicing up anything that gets in your way isn’t the only thing this game provides. After each mission, you’re sent back to a decrepit temple that you can repair with resources earned by playing the game. You’ll notice that most of the floor (and the pillars) are made up of stone blocks, each of which needs to be repaired individually rather than repairing one aspect entirely.

In the very center of your dojo, you’ll be met with your level selection screen, a neat hologram complete with indicators of factories that you can invade. You’ll have to take my word for that though, as the blob of white blocks that you’re shown doesn’t really resemble anything close to a building. The names or the types of locations given to you doesn’t really seem to affect your experience in-game, you’ll just be running through the same gray corridors fighting the same enemies over and over again. 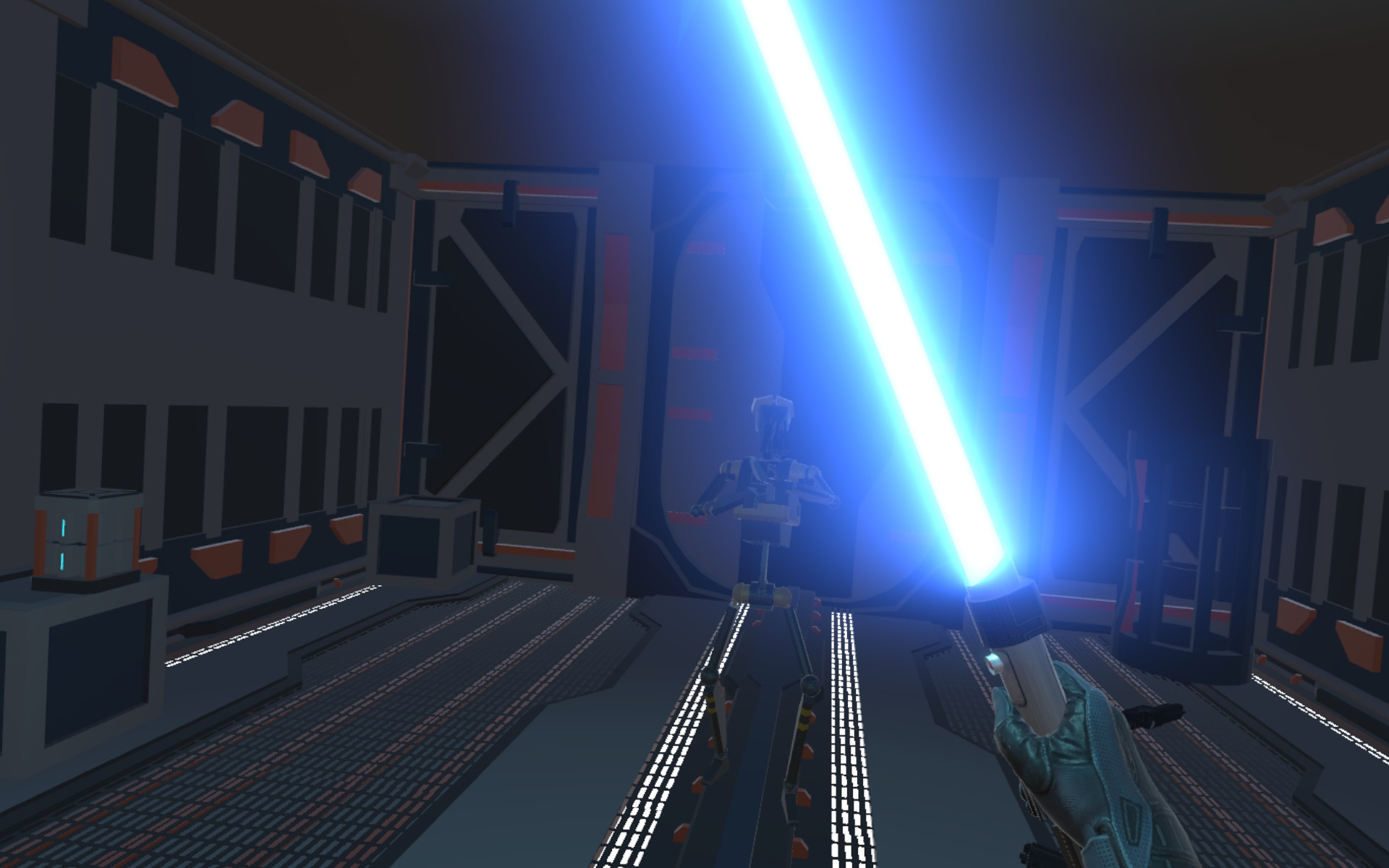 Saber Fight VR feels very much like an early access game despite being advertised as a full-fledged game. The idea and implementation are all there but it’s far too rough around the edges or barely functional to get anything more than half an hour of entertainment from it. A $10 price point just doesn’t feel justifiable for what’s currently there.

“We asking to present a different VR game that offers such features and mechanics as Saber Fight VR at a lower price. We strongly recommend that reviewers familiarize themselves with the new version of the game because the current review seems to be simply out of date. Nevertheless, thank you very much for the feedback, we beat our chest for what did not work out but we guarantee that it will be better.”