REVIEW: Baba is You

An innovative and mind-bending 2D puzzle game that every puzzle lover should look into.

Baba is You is a puzzle game where our main goal is to change the rules of the puzzle in order to beat it. Each puzzle comes with its own set of rules which are shown to us via text. We can change the text in order to change the mechanics of how each object in the puzzle behaves, which would allow us to solve the puzzle. The game spans a variety of stages across several in-game areas, and each new area introduces new rules and objects into the mix, eventually forming harder and harder puzzles.

In every single stage, we get control of a character. In most stages it’s a small bunny-like animal called Baba, but at times we get to control other characters. The game denotes this with the text ‘Baba is You’ in the stage, but since the rules of the game are changeable, we can alter it to anything else in the level being in front of ‘is You’. So, if you place the word ‘Rock’ in front of ‘is You’, then we start to control a rock, or more precisely, every instance of a rock in the level. If at any point nothing is in front of ‘is You’, then the level freezes and we have to undo our moves or restart the stage.

Other notable rules that make up the basics of most stages are ‘is Stop’ meaning an object is impassable and acts as a barrier, ‘is Win’, meaning touching this object grants us victory for that stage, ‘is Push’, meaning if we walk into that object, we push it by one tile forward, ‘is Defeat’, meaning if we touch that object, we instantly die and need to undo or restart the stage, and so on. 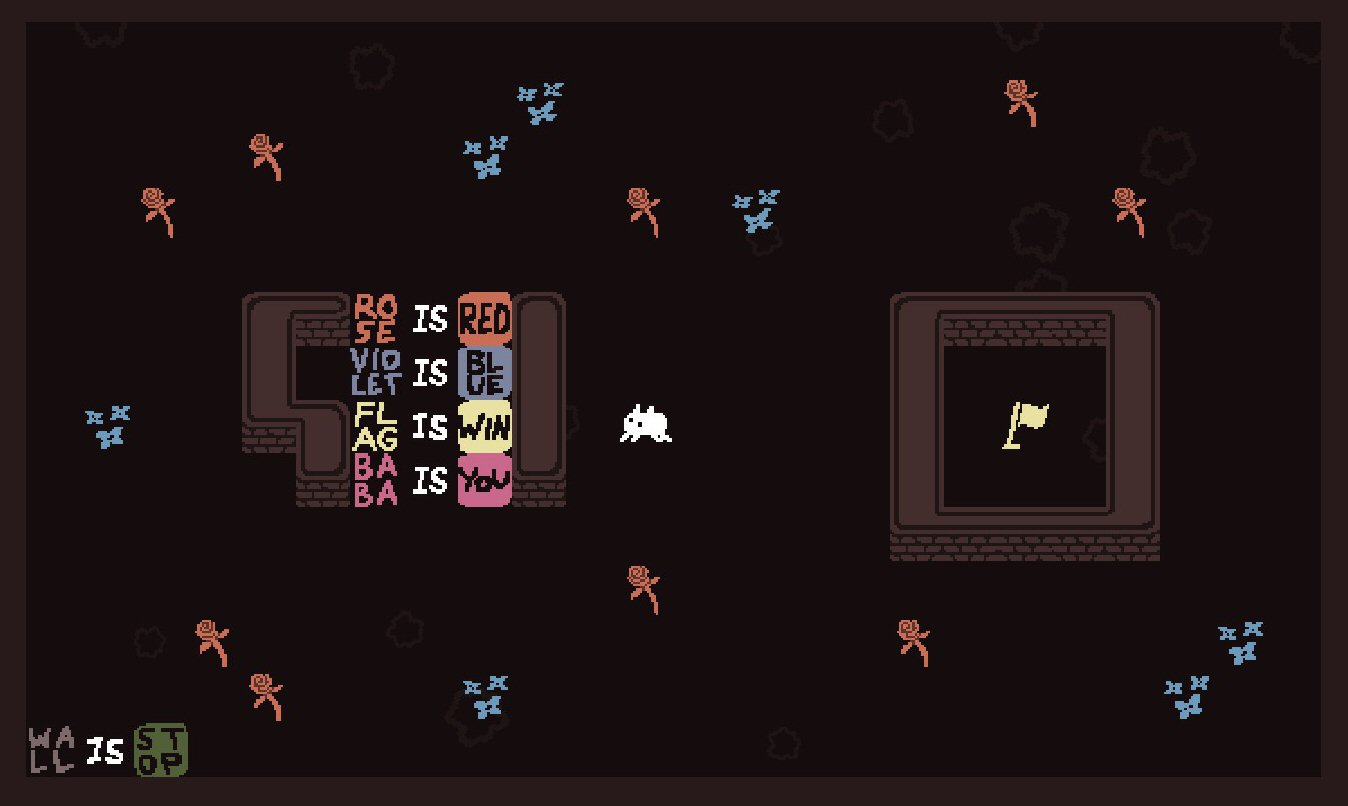 So, by manipulating these rules, we can change the mechanics of each puzzle. Removing the name of an object in front of ‘is Stop’ for example will no longer make it impassable, and suddenly we find ourselves walking through walls. And if you manage to construct ‘Baba is Win’, then you automatically win the stage. We can make objects that would kill us, such as lava or water or red skulls, into harmless by either removing ‘is Defeat’ from their name or even having ‘is Push’ after them, which would allow us to push them away. 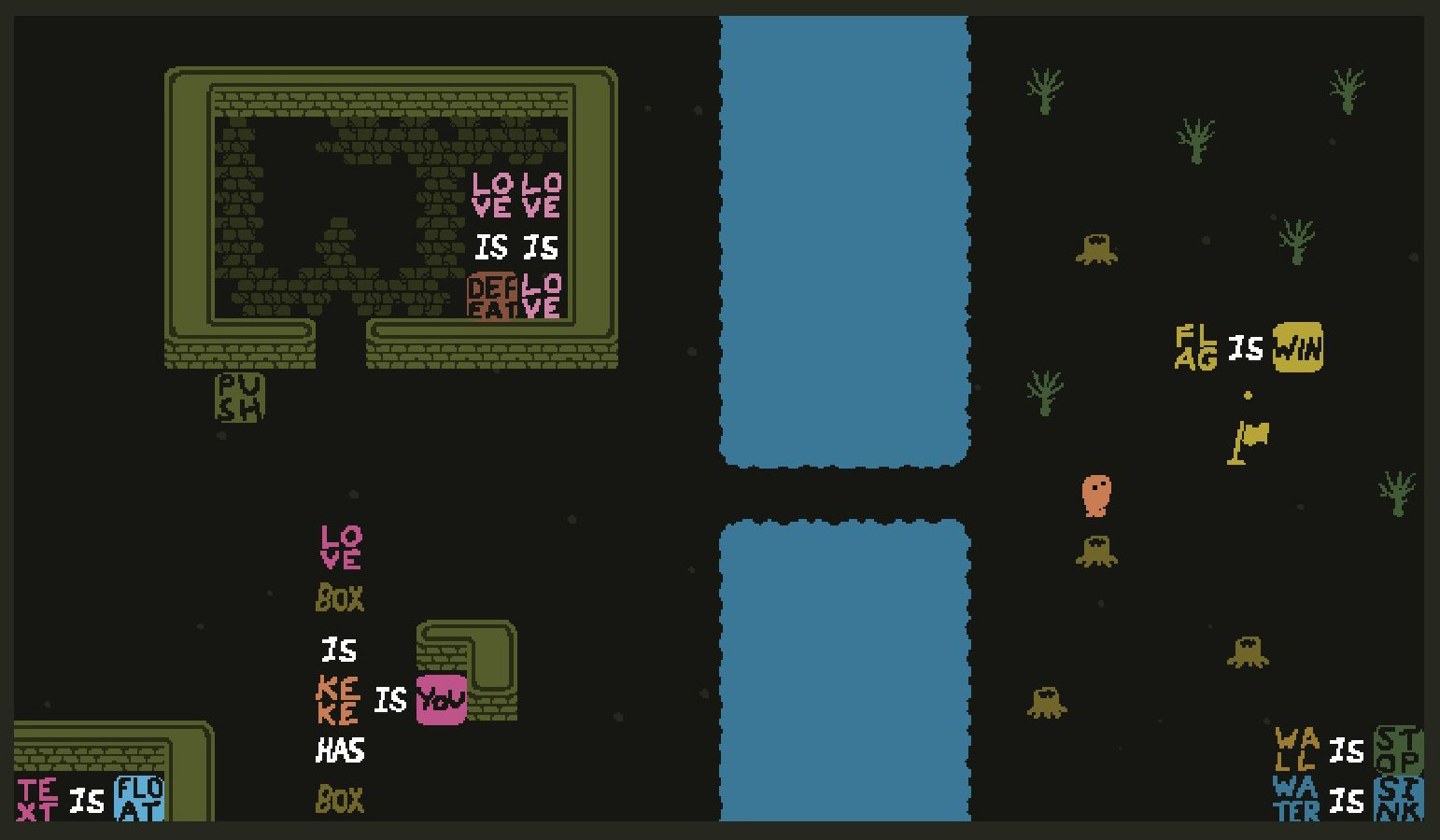 The game is split into thematic areas (island, forest, volcano, space, and so on) and each area has several puzzle stages. The order in which we complete the stages doesn’t have to be linear, and we have some flexibility in how we complete them. Some can be avoided altogether because only a certain number of stages need to be completed in each area in order to get the ‘Area Completed’ and to unlock further areas. Generally, the stages in each area start with easy ones and get harder the deeper into the area we go.

As we make progress across the areas, new rules get added into the mix, such as the use of words ‘And’, ‘On’, ‘Not’, as well as functions such as making an object into a teleporter or introducing door and key mechanics where two objects can annihilate one another if one of them is assigned the ‘Open’ function and the other a ‘Shut’ function and they touch. 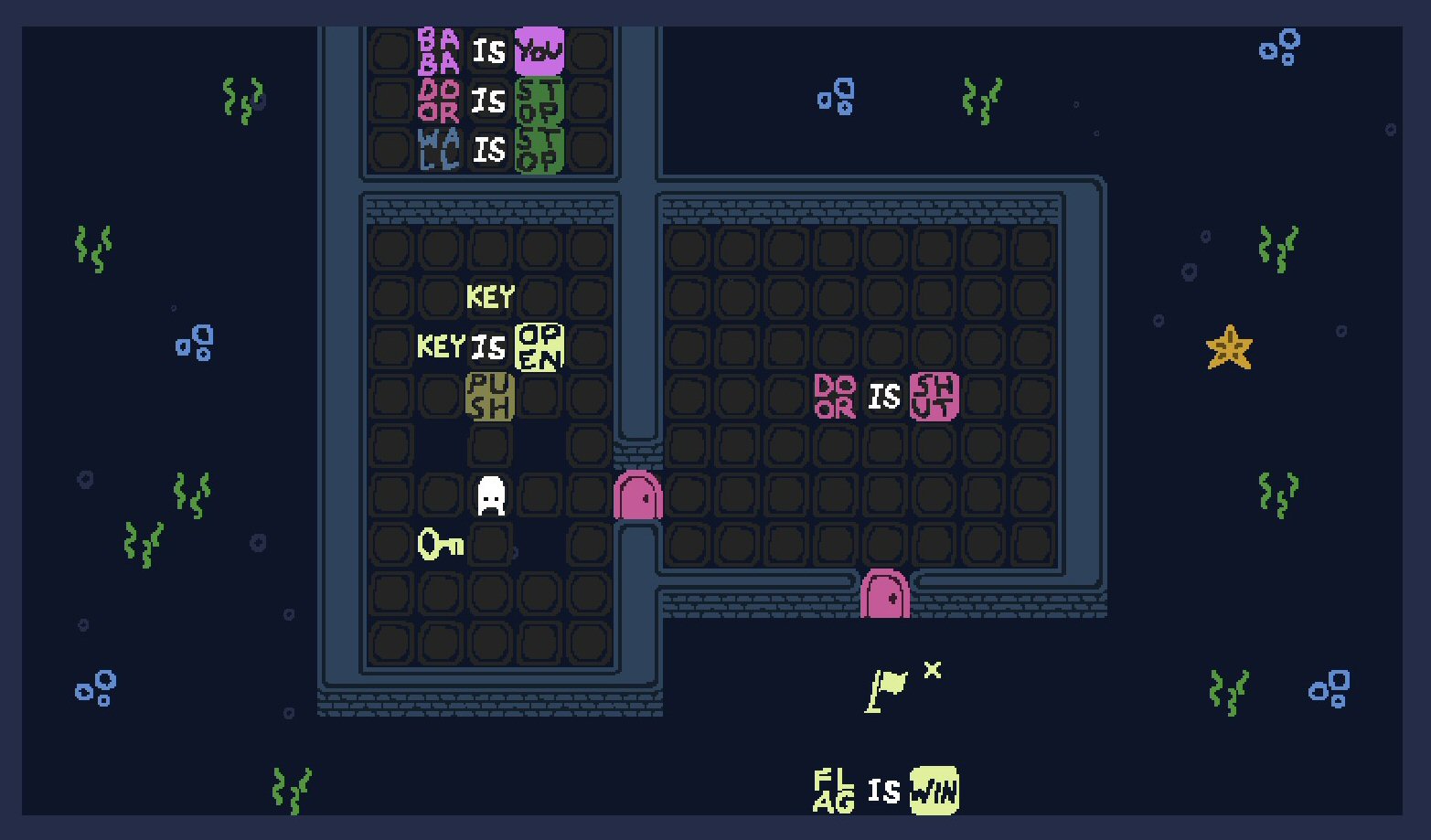 Many of the stages in this game require us to think outside the box and to experiment a bit. The solution might not always be obvious, and if we use strictly linear logic, we can easily miss it. Sometimes you might even need to leave the stage and come back to it later, so that you can have a fresh look at it.

The difficulty of the puzzles gets high fairly early on, so some people might give up and lose interest quite quickly. Some of the things we can do with the in-game rules might be a bit counter-intuitive at times too and require us to experiment even with implausible solutions just on the off chance that they might work. However, the charming style and the novel mechanics should keep you engaged even with the difficult puzzles, and the fact that not every single puzzle needs to be solved can provide us with a bit of leeway in how to make progress through the game. 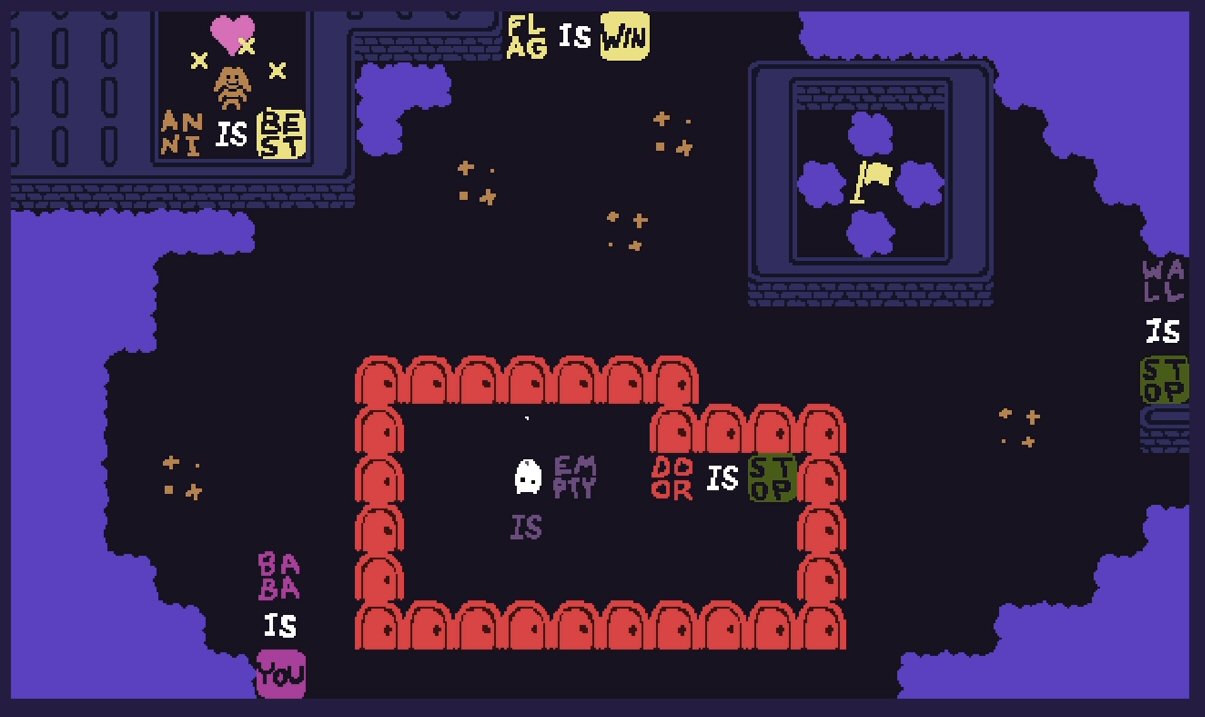 The game has a rather simple presentation. Its visuals are very basic and are only just detailed enough so that we know what we’re looking at. There is a very notable use of different colours for different functions, which makes it easy to recognize everything in the level quickly. The music is also on the simple side, with most of it being reminiscent of soundtracks from old-school games. This simple and retro-styled visual and sound design fits this game well, managing to be crystal clear while at the same time not distracting us from the game. It allows us to concentrate mainly on the gameplay.

The UI designs and the sound effects have also been carefully done as it seems, as they do a good job at conveying information to the player. 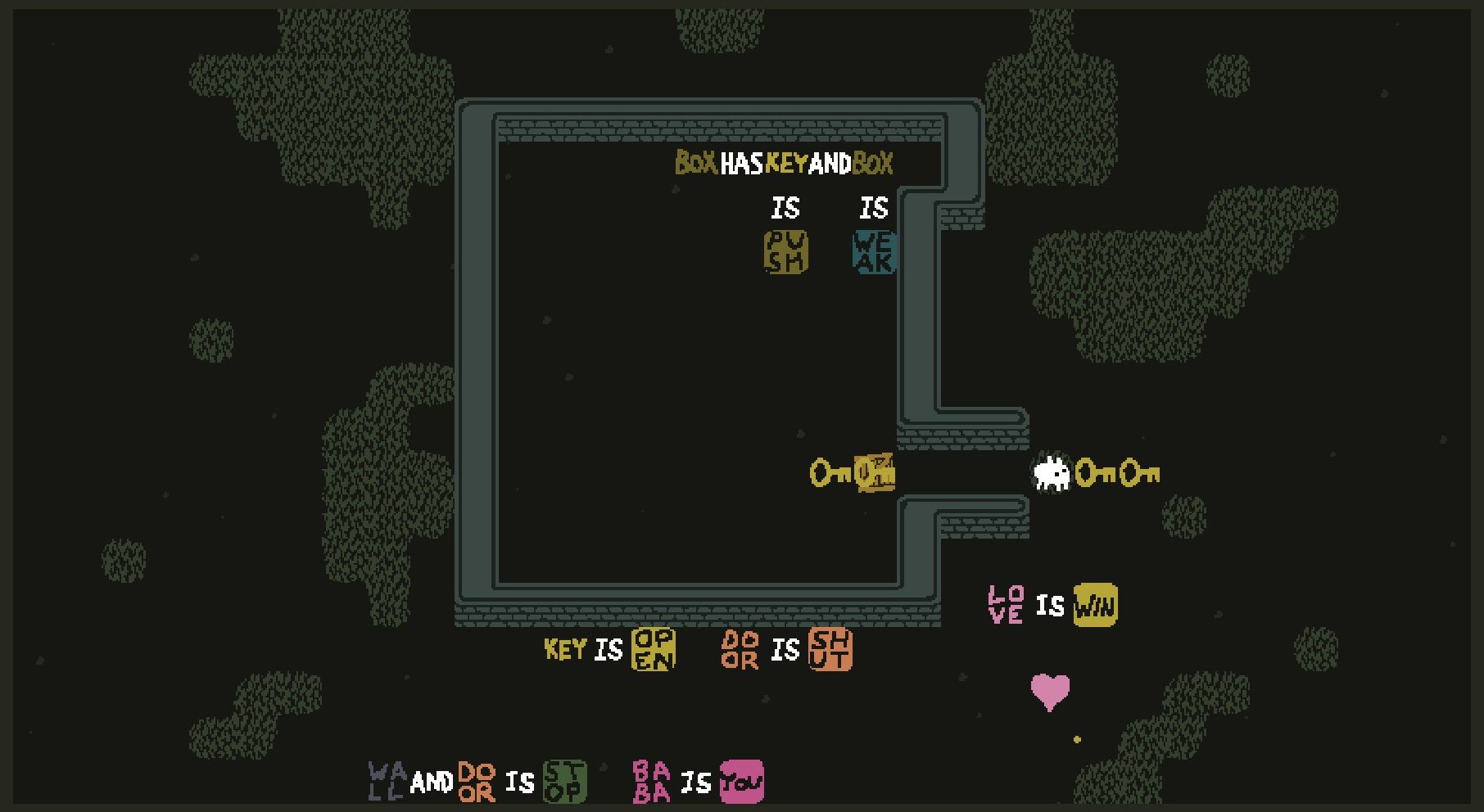 This game has a very original concept and it manages to execute it really well. Many of the puzzles are tricky and will challenge your thinking, but when you do figure out the solution, you start to feel super smart. There’s a feeling of reward involved when we solve each puzzle. Although this feeling can diminish later on as there are a lot of puzzles and some of them can take a while to solve with many trial and error attempts.

In general, ‘Baba is You’ is well worth getting if you are a fan of puzzle games, because the concept and puzzles here are fresh. The game might look a bit niche and simplistic on the surface, but its gameplay has a lot of depth. It even has multiple endings based on the way you beat the game, although the whole backstory to this game seems quite ambiguous and will leave you scratching your head, so don’t be expecting much of a narrative here.