A modern indie take on the classic turn-based isometric RPG genre that draws inspiration from Fallout and Shadowrun, and borrows liberally from the novel Roadside Picnic.

Potential. It’s exciting. It’s tantalizing. It fires the imagination and makes us wonder what could be. It’s also a big tease. You see it discussed a lot in sports circles. “If this kid reaches his potential, he’ll be a Pro Bowl player for a decade.” It’s usually bandied about because, at the surface level, an athlete looks the part. They have the requisite body type, size and speed. And they possess an athletic prowess that just makes everything they do look easy. But so often, when the predominant discussion about an athlete is their potential, they rarely live up to it. Because there’s so much more to success than just looking the part.

Funny thing, potential. Living up to it can be difficult.

Encased, an isometric RPG by Dark Crystal Games that is currently in Early Access on Steam, shows a lot of potential. It aspires to be a spiritual successor to the original Fallout titles, borrowing everything from the character creation screen and color palette to the turn-based combat and atmospheric music. And like a tantalizing athlete, at first blush, it looks the part: it has an intriguing sci-fi setting copped from a novel, strong character customization, an interwoven progression system, and dialog trees with multiple options. The game world appears primed for all sorts of interesting characters, quests and adventures, and the engine it’s built on looks great and runs smooth. And unlike many Early Access titles, it actually has very few bugs. So what’s wrong with it? Simple: at this point, it’s mostly potential. Play it for a few hours and one can see the possibilities, but also just how far it has to left to go.

Encased borrows its premise directly from Roadside Picnic, a science-fiction novel written by Soviet-Russian authors Arkady and Boris Strugatsky and published in 1972. In the novel, a superior alien species has briefly stopped by Earth (like people on a roadside picnic), leaving behind what is surely junk to them, but is dangerous and powerful technology to us humans. The game takes place in a closed dome over one such alien visitation site, and the player is recruited by the Cronus corporation to join their enterprise in researching the technology and unlocking the secrets left behind.

Skills govern a variety of abilities that the player can unlock. How these abilities become unlocked is where Encased separates itself from other similar titles. Shadowrun, for instance, uses a linear gatekeeping mechanic to control progression. Players save skill points, and when they have enough available they unlock the next ability in the sequence. In Encased, abilities can be unlocked in non-linear order, provided the character possesses the required minimum scores in multiple skills. Thus, unlocking the Rapid Reload ability doesn’t just require a minimum score in Light Guns, but also requires a minimum score in Heavy Guns and High-Tech Weapons. The result of this system is that characters cannot hyper-specialize in a small set of skills. Spending points in Light Guns, and only Light Guns, would leave a character without some useful firearm-related abilities. Thus, this progression system guides players toward more versatile builds and discourages them from specializing. Whether this is a good or bad thing is unclear at this time.

As is standard for most turn-based RPG’s, the player character is free to roam around the game world in real-time, entering into dialog with other NPC’s, looting containers, and performing quests. As soon as combat is initiated, the turn-based mechanics kick in. From that point on, the player needs to selectively utilize their Action Points and Combat Abilities to eliminate threats, or otherwise end hostilities. The graphics and controls for turn-based combat look and feel exactly like those in Harebrained Schemes’ Shadowrun games, and players familiar with those titles are going to feel right at home.

Unfortunately, in its early release form, the game just isn’t anywhere close to realizing its potential. It’s not buggy – far from it. The game world is a fully rendered 3D affair with a smooth 360 degrees of camera rotation. In a word, the game engine is slick. The issues in Encased aren’t bugs, but instead, design choices, mechanics, and balance.

Chief among the problems is that dialog options for quests frequently don’t have enough viable solutions. This isn’t to say that there are too few choices – quite the contrary, most quests provide a bevvy of dialog options, and the game smartly lets the player know if a response requires a certain skill check or minimum reputation level. The problem is, the vast majority of these responses do require skills checks or reputation scores to unlock, thus making it almost impossible to engage many of the game’s quests if the character isn’t built just so. When a character doesn’t meet any of the minimum requirements for the provided dialog options, the player is essentially blocked from solving the quest. In some cases, such skill checks prevent the player from even initiating certain quests at all. This makes the game’s quest system feel frustrating. It appears like there’s a lot of choice here, but if your character doesn’t have the necessary skills and reputation, there really isn’t much choice at all.

As an example, I noticed an NCP needed help trapping some kind of rodent; there was an obvious quest to be started, but only if my character possessed the Trapping skill. This was something my character didn’t possess and wasn’t likely to ever unlock given the build I was aiming for. Thus the dilemma: spend precious points unlocking a skill I might never use again, just to experience a side-quest, or leave the NPC alone and never experience the content at all.

Encased clearly wants to be thought of in the same way as the first two Fallout titles, but it hurts itself because it takes itself so seriously. For example, by default, the game operates in a survival mode of sorts, and there is no option to toggle it off. The player-character must eat and drink somewhat regularly or suffer penalties. Some of these penalties hit the character so hard that they can prevent the equipping of weapons, making combat even more difficult than it already is.

Speaking of combat, once the player character leaves the starting area, it gets downright brutal. I love tactical, turn-based games, but the combat in Encased is uneven at best, and entirely too harsh at its worst. Weapons do too little damage, and hit percentages are entirely too low for ranged weapons at a distance. In addition, enemies frequently evade attacks in their entirety. One enemy standing immediately adjacent to my character completely evaded an attack from my pistol. Frustrating doesn’t start to cover how I felt. If that wasn’t enough, enemies are overwhelming in numbers and strength, making combat seem downright unfair. Healing remedies seem almost non-existent, and the ones that can be obtained are expensive, a problem further crippled by the game’s lack of money.

Encased takes itself so seriously, it’s as if the developers have forgotten that the point of playing games is to have fun.

Early Access titles are expected to have issues, and Encased is no exception. But it’s issues are not bugs so much as they are related to its design. For instance, many items have unclear descriptions on them, which makes discerning their purpose difficult. The quicksave feature writes a new physical file to disk each time the player presses the F5 key, causing a fair bit of file bloat over time. The quality of the sound effects is uneven, and dialog options can feel awkward as well. As an example, when a player is ready to halt a conversation, the option that is provided is written as “Move Away”, which makes it seem as if the NPC just ripped off a particularly rancid fart and the player character should attempt to avoid the stench at all costs. “Leave” seems like it would have been a better option.

The dialog in the game is uneven. In some places it is too verbose, and in other places it is threadbare. During one quest, my character needed to convince an NPC to get back to work, and the dialog option was simply presented as “convince them.” On the flip side, the introduction to the game is incredibly long-winded, repetitive, shifts perspective, and does a muddled job at setting up the story. By contrast, a small 119-word analogy on the Roadside Picnic wiki page, credited to a character in the novel called Dr. Valentine Pilman, made the book’s concept entirely clear in short order. The developers at Dark Crystal Games would do well to produce their own similarly-styled analogy as a way to explain their setting and prepare the player for the world they’ve created.

And it probably wouldn’t hurt to get Ron Perlman to narrate it. 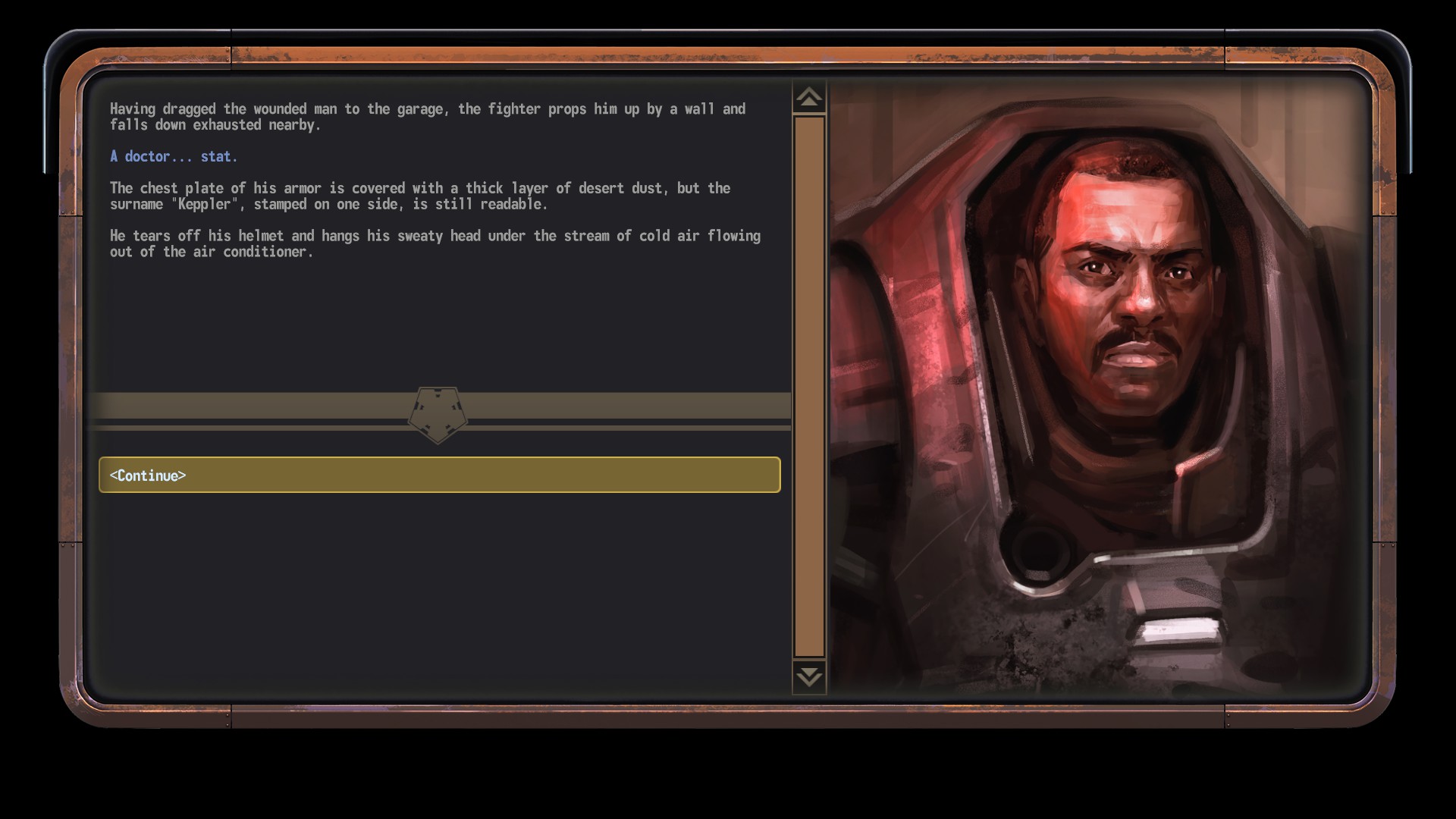 Encased holds a lot of promise. The developers at Dark Crystal Games are an experienced group, with titles such as Divinity: Original Sin 2 and Mass Effect on their resumes. The crisp graphics, smooth engine, and deep character mechanics are testaments to this team’s talents. It looks like a Fallout game and plays like a Shadowrun game. What’s not to love? But somewhere among all of that potential, it’s missing a lot of important connective tissue. It’s missing the things that make these sorts of games fun. It’s missing it’s heart and soul. If the developers can fix some of the issues and balance the gameplay better, Encased could be a big hit. Until then, it’s just another tease; a title with a lot of potential to live up to.