Light puzzles are back with a vengeance in what appears to be at least the sixth entry in the series. If you enjoy solving puzzles it’s time to ReThink your life!

I have never played a ReThink game before but another reviewer here has played almost all of the other ones. I deliberately did not consult that person nor did I review their reviews to see what kind of rating they gave because I didn’t want my opinion to be influenced by others. While I loved the Portal series due to the somewhat challenging puzzles combined with a hard not to love evil AI, it isn’t the only puzzle game I have played. I’ve actually played quite a number of them so at this point it’s pretty hard for me to find something new that stops me in my tracks for long. ReThink 3 did offer up a new challenge but it was mostly due to me not really understanding what it was I was supposed to do or not do. There really isn’t much of a hand holding tutorial most likely due to the fact it expects you to have played the previous five or so games. Unfortunately for me, I was coming in blind. I was easily able to figure the game out for the most part but some of the seemingly incomplete puzzles that were still counted as solved left me scratching my head a bit. I wasn’t quite sure if I had actually solved the puzzle or if the game just was just pushing me along. I found this review to be as challenging to write as the game was to play so please excuse the fact it isn’t quite as detailed or of my usual length. I would rather leave a little information out and let you find it for yourself rather than steer you the wrong way.

The gameplay mostly consists of you picking up a block of some kind and placing it somewhere else. You might need to rotate the block in order for it to do what you need it to do, but there isn’t much else that requires your attention. Early levels have you just redirecting lasers from the source to a target point but as you progress the challenge does increase. You might be given a blue laser and a green laser but the target point is looking for more of a teal color. Shooting a blue or green into it just won’t do it for you, but combine those two colors and suddenly you have a teal laser. The gameplay continues to get more complicated with the addition of different splitters, obstacles, limited placement tile space, shortages of blocks and other such complications but if you stop to think for a bit you can probably puzzle it out without too much difficulty. There is likely only one intended solution for each puzzle although creative people might be able to come up with more. 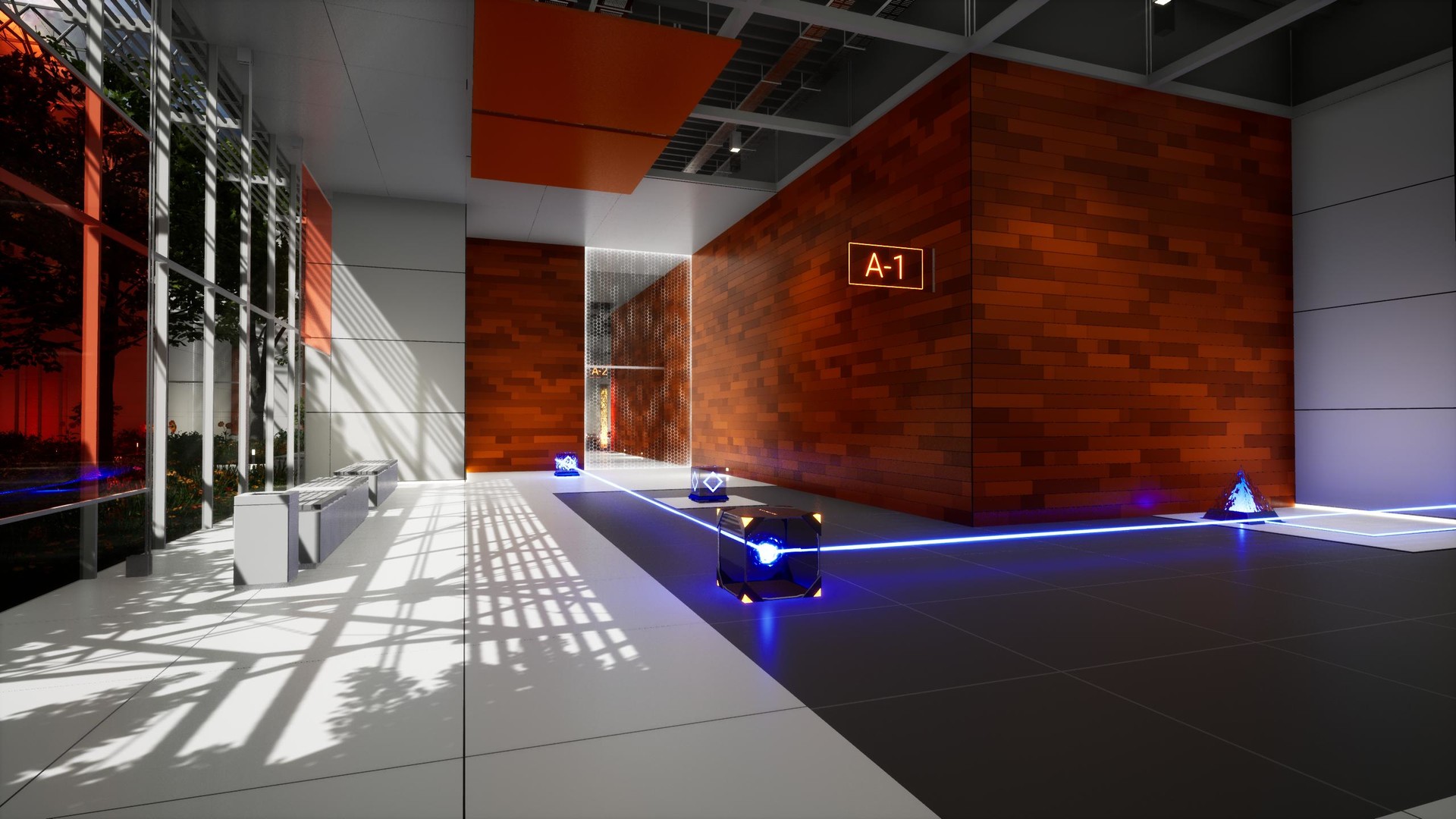 The game is broken up into levels with several stages. Each stage must be completed before you can advance to the next level. Stages get progressively more difficult and levels typically introduce a new gameplay element. I was able to work my way through the game with relative ease once I realized exactly how the mechanics worked, but even then, it did pose enough of a challenge to keep things interesting. Based on the gameplay video I have seen from the previous ReThink games it looks fairly similar in terms of concept and core gameplay but visually it looks much better. 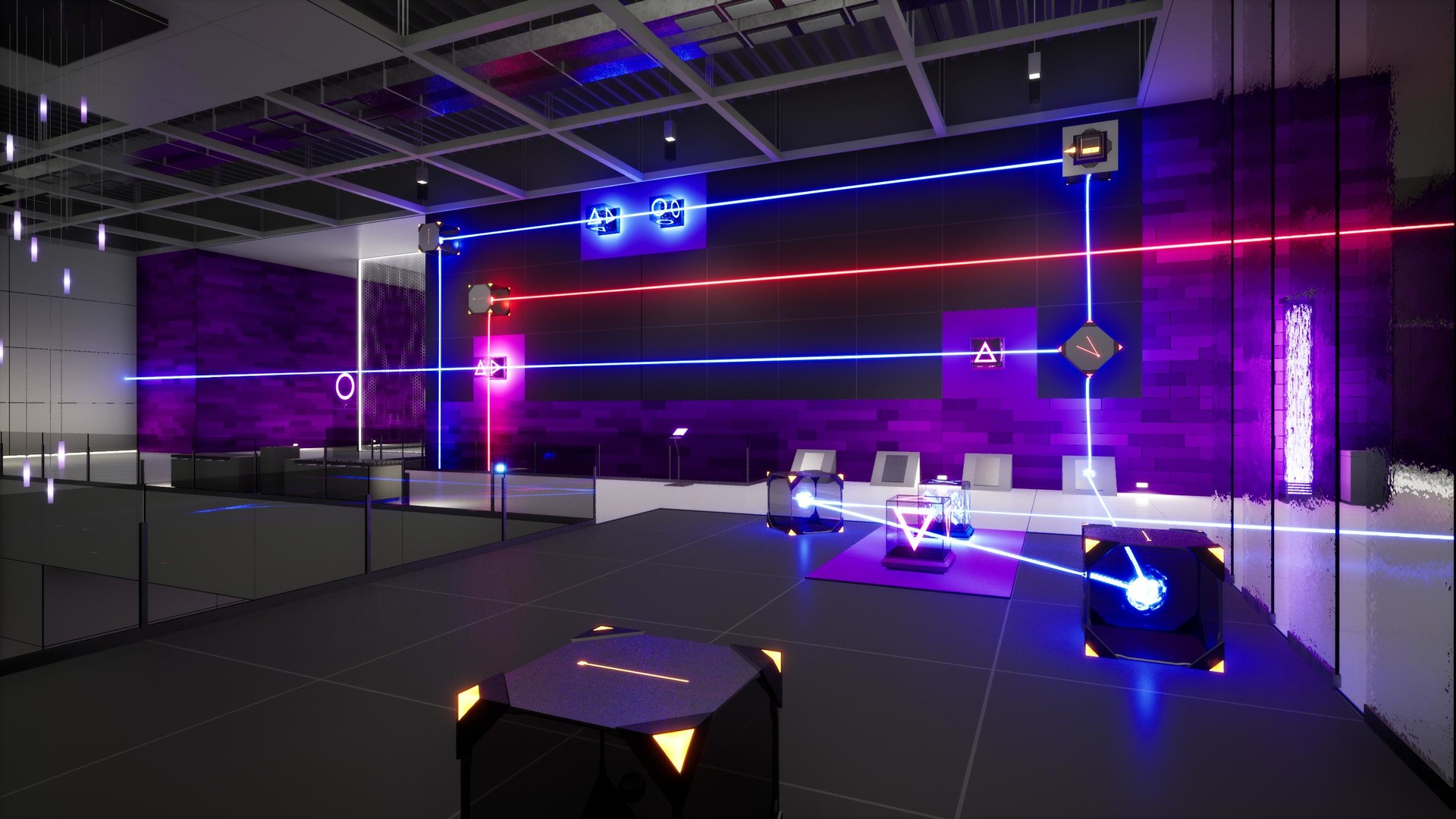 For a puzzle game in this genre, it looks good. It is colorful enough to keep things interesting and for the most part, feels like it is set in some kind of laboratory or a stylized office/apartment building. Some of the blocks and receptors could be a little more detailed rather than generic looking but it still works fine. Even after playing through the entire game I am still not quite certain of what some of the symbols were trying to tell me and at this point I am too afraid to ask. I just know that if I fiddle with this bit and move that bit… the exit generally will open even if I feel like I didn’t finish solving the puzzle. Most of the levels look fairly similar to the previous ones other than the more complicated landscape. There are enough accents to the areas to give it visual appeal without it being too barren or too cluttered. 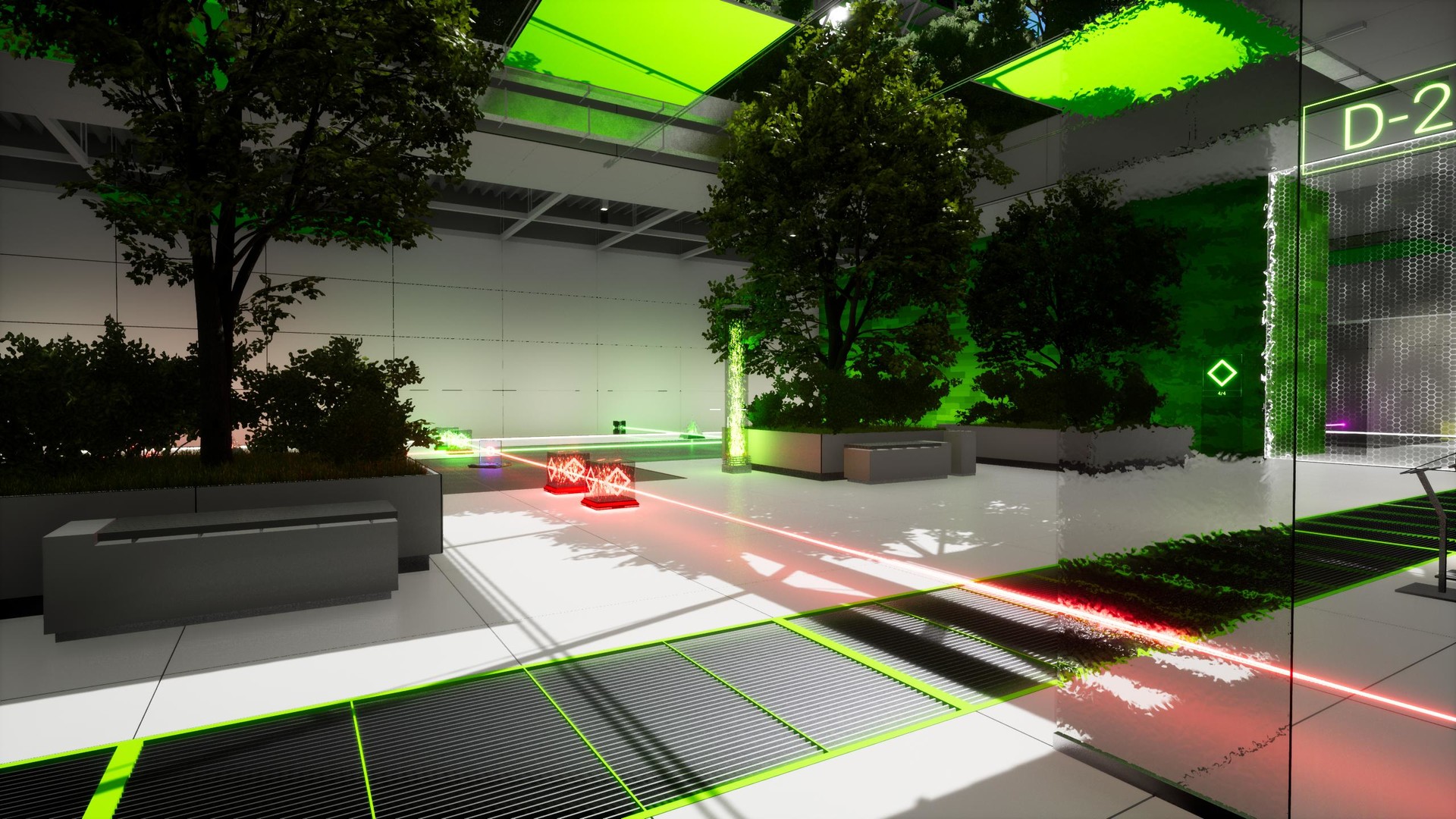 This is one of the first games where the soundtrack popped out at me. Sadly, I often have to go back and relaunch a game I am reviewing just to see if it actually had background music. That was mostly due to the fact it was pretty much the only sound the game offered to me. There are no spoken words throughout the game. It is all just ambiance and background music. The selection of background music was very enjoyable and did help the game be more fun to play. Often times there are masterful and wonderful tracks backing up the games I play but they kinda blend into the background taking a backseat to the action. This is likely due to music being played in my workplace and having to tune that out in order to focus on important work duties that need my undivided attention. However, if I simply mute the background track of any game I play, I always notice that it is missing. With there being no other sounds to cause a distraction or for me to fixate on, I was very much able to enjoy the accompanying background music as I played through the game. 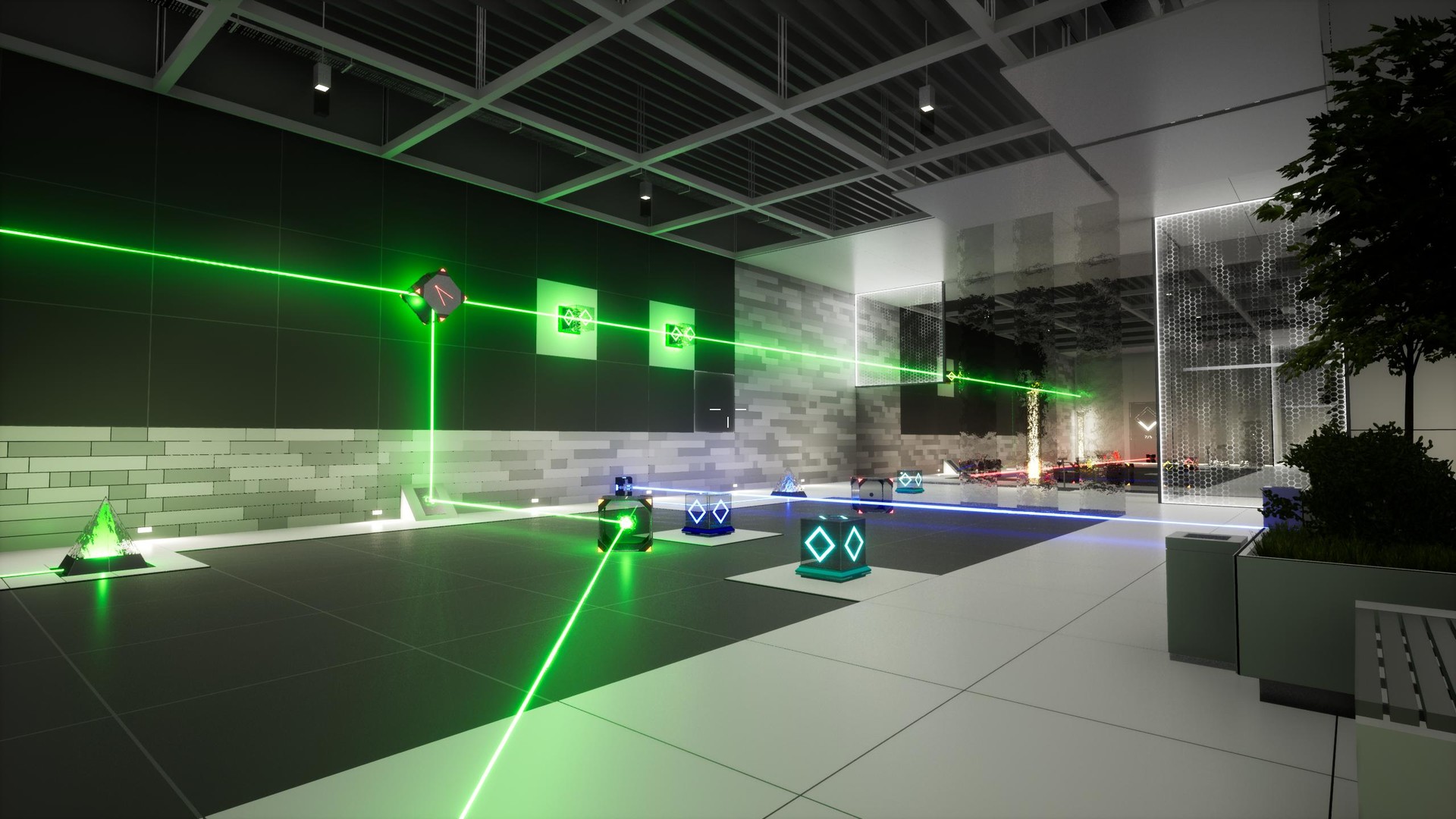 This game is very simplistic on the surface. You can click to pick up things, click to place things and rotate things as well. That’s about it. Almost everything of any significance can be performed with just the mouse or a few key presses. The game was very responsive and the system used works well. I can say it would have been nice to show you the object you were holding on your screen rather than just an icon for it near the bottom of your screen. I sometimes went over and picked something up and ran it over to where I wanted it to go just to realize that it didn’t register me picking it up or maybe I was already carrying something else I forgot I had. The User Interface in that regard could definitely use a little more polish. Ignoring that, everything else seemed to work well. There were never any of the fine adjustments to your placing of multiple blocks to get the puzzle to unlock, everything snaps to the center of the grid it is placed on. This ease of placement thankfully allows you to not need to fight against pixel perfection for proper solutions to puzzles. 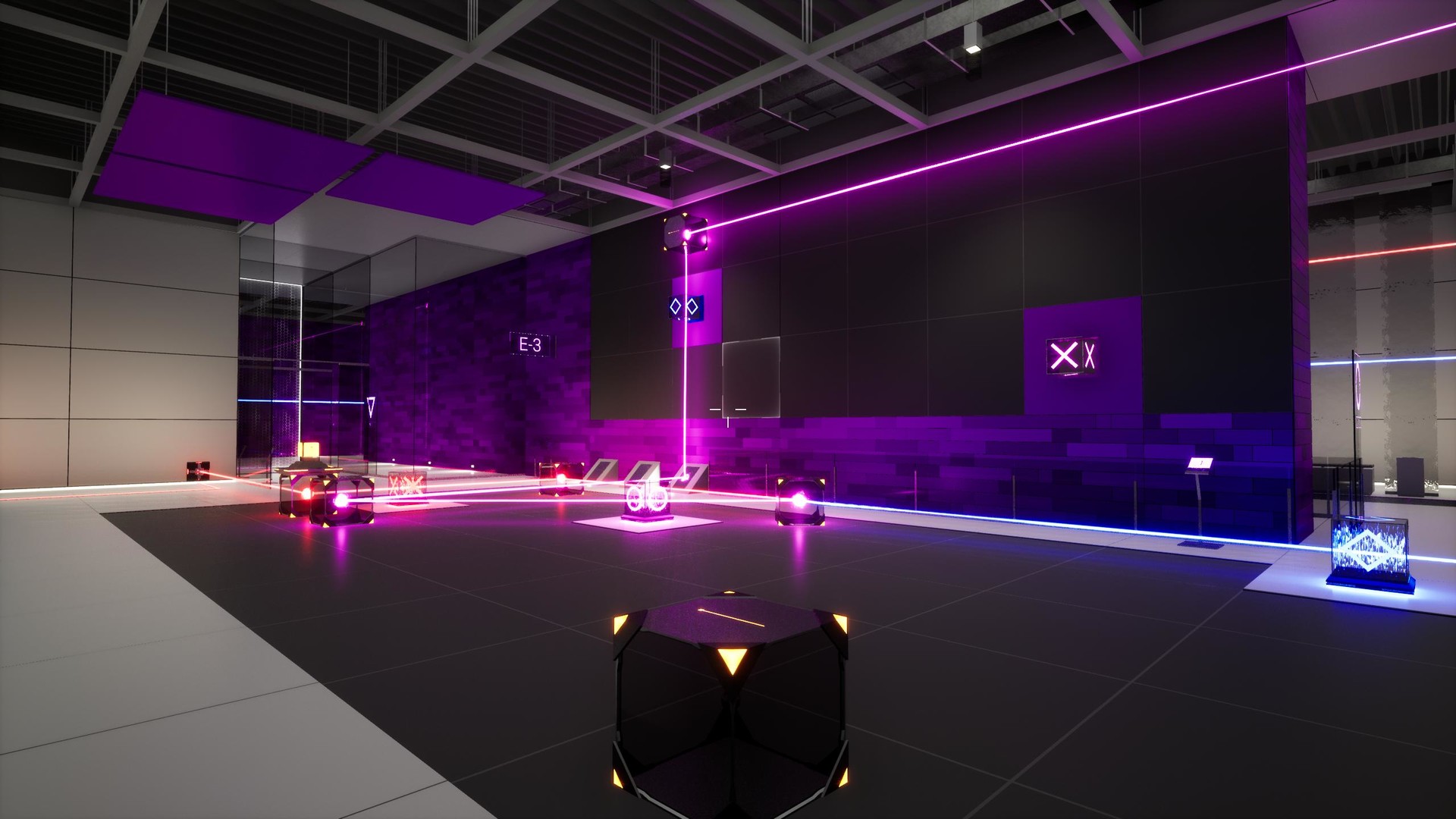 ReThink 3 is an enjoyable puzzle game using primarily a light beam mechanic. I’ve always enjoyed these sorts of puzzles and was glad to have the opportunity to give this one a try. I still remain unsure if I actually solved some of the puzzles or if the game just took pity on me and let me progress. Despite its high system requirements, I was able to play it without any difficulty on my underpowered system. It kind of makes me regret passing on the original ReThink or ReThink Evolved in the past simply due to my concern about it not running on my system. If you are looking for an enjoyable puzzle series, ReThink likely is a series you should check out. If you enjoyed Portal for the witty characters, then you might be disappointed that there is not even so much as a story to guide you through the game. Overall for a puzzle game, I will have to give ReThink 3 a conditional Save.