An RPG/FPS hybrid in a world split apart by warring factions and picked apart by scavengers, bandits, and terrorists. Can you unite this broken land?

You are nothing, but you can become everything

Have you wanted to simulate liberating an entire country using an army consisting of dress-clad, pistol-wielding women? Want to command a group of bandits to terrorize and extort the populace? Then Freeman: Guerrilla Warfare might be the game for you! In the same vein of games as Mount and Blade, Freeman can be described primarily as an RPG with FPS components in a modern setting. 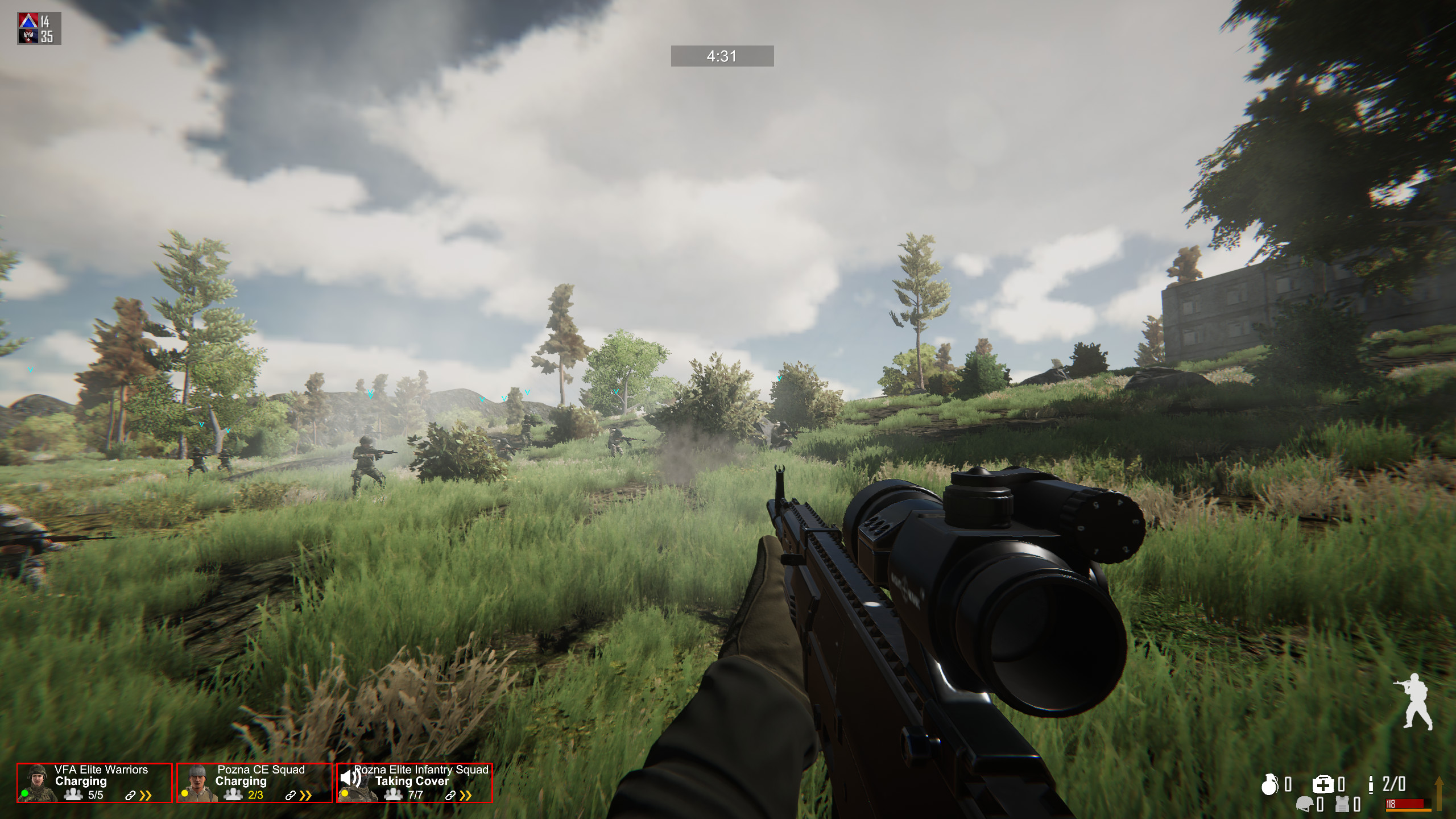 Familiar gameplay with a twist

Freeman: Guerrilla Warfare has adopted the Mount and Blade formula while giving it a fresh take, giving fans of those games a very familiar experience. You start off as a nobody, a person trying to live your life with the choices you’ve made before and during the war shaping what you’ll start off with both stat and equipment-wise. You’re then forced into the overworld with barely any resources and no direction. Your primary objective is to unite the continent of Cherniv under one flag. How you do this is completely up to you, assuming you choose to do so at all.

The country of Cherniv is vast and carries plenty of points of interest and threats alike. As you roam around from place to place, gaining power however possible, you’ll be interacting with a (more or less) constantly evolving land. Lesser factions of bandits get stronger the longer they’re left alone, cities are captured and recaptured by the several larger factions as the fighting never seems to stop.

The core gameplay, to those who are unfamiliar with how Mount and Blade works, is a bit of a chaotic mess. There are many different factions going against each other, attacking and claiming cities for their own while lesser factions tend to stick to their camps and bully convoys or unfortunate passersby. You’ll be avoiding most of them until you can amass enough of an army to push back. Weapons, armor, and food are all necessities and can be procured either as loot after a battle or by buying them from towns or cities.

Of course, the most important part of the game and something you’ll be doing very often is getting into firefights with the factions of Cherniv. Whether you got jumped by a large group of bandits or you chose to rob the wrong people, you’ll be putting your gun to use very frequently. Before the firefight (as well as during) there’s an overhead map of the area, letting you both deploy your troops and plot their routes around the battlefield, giving a refreshing air of strategy that is neither too complex nor too simplistic. 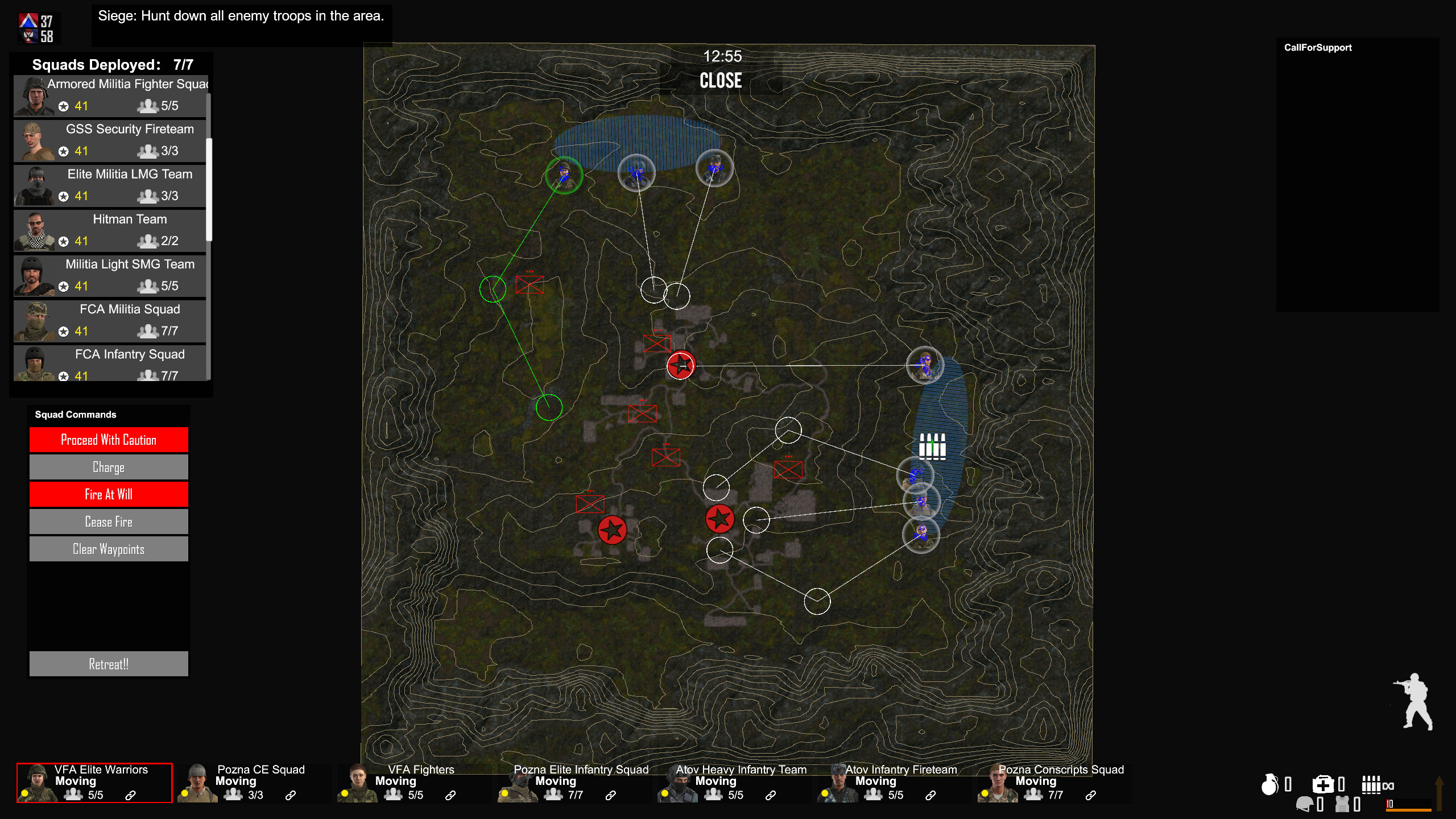 Once you’ve planned your army’s movements and you’ve dropped into the battlefield yourself, you’ll finally be able to experience the combat, which is hands-down the best and most exciting part of the game, especially in larger numbers. Being able to see all your troops (as well as any additional troops you’ve teamed up with) storm the enemy team, getting into a massive firefight with bullets flying all around and the occasional grenade going off is a very intense experience. The fight goes on until one side runs out of troops, and your troops are always at risk of dying if they aren’t well-prepared and well-placed.

Bear in mind, you are no superhero. While you can jump in and join the action just like your minions, you are also just as vulnerable as they are. If you happen to get knocked out of the fight by taking one too many 7.62 rounds to the face, your troops can still carry on the fight without you. Just be aware that you always run the risk of losing outright, with your hard-earned military force being killed off in just a few moments, setting you back to square one. Should you succeed, however, you’ll get the spoils of war, loot in the form of weapons, ammo, armor, or commodities off the corpses of your foes. Any survivors are imprisoned and can be tortured or coerced into your fold with enough “persuasion” over time.

The variety of weapons you use, find, and loot is quite impressive, not only giving you a multitude of guns to choose from, but also giving you a respectable range of modifications for them as well as having proper ammo types per gun. You wouldn’t just go into a marketplace expecting to pick up a nice hefty bag of AMMO™. 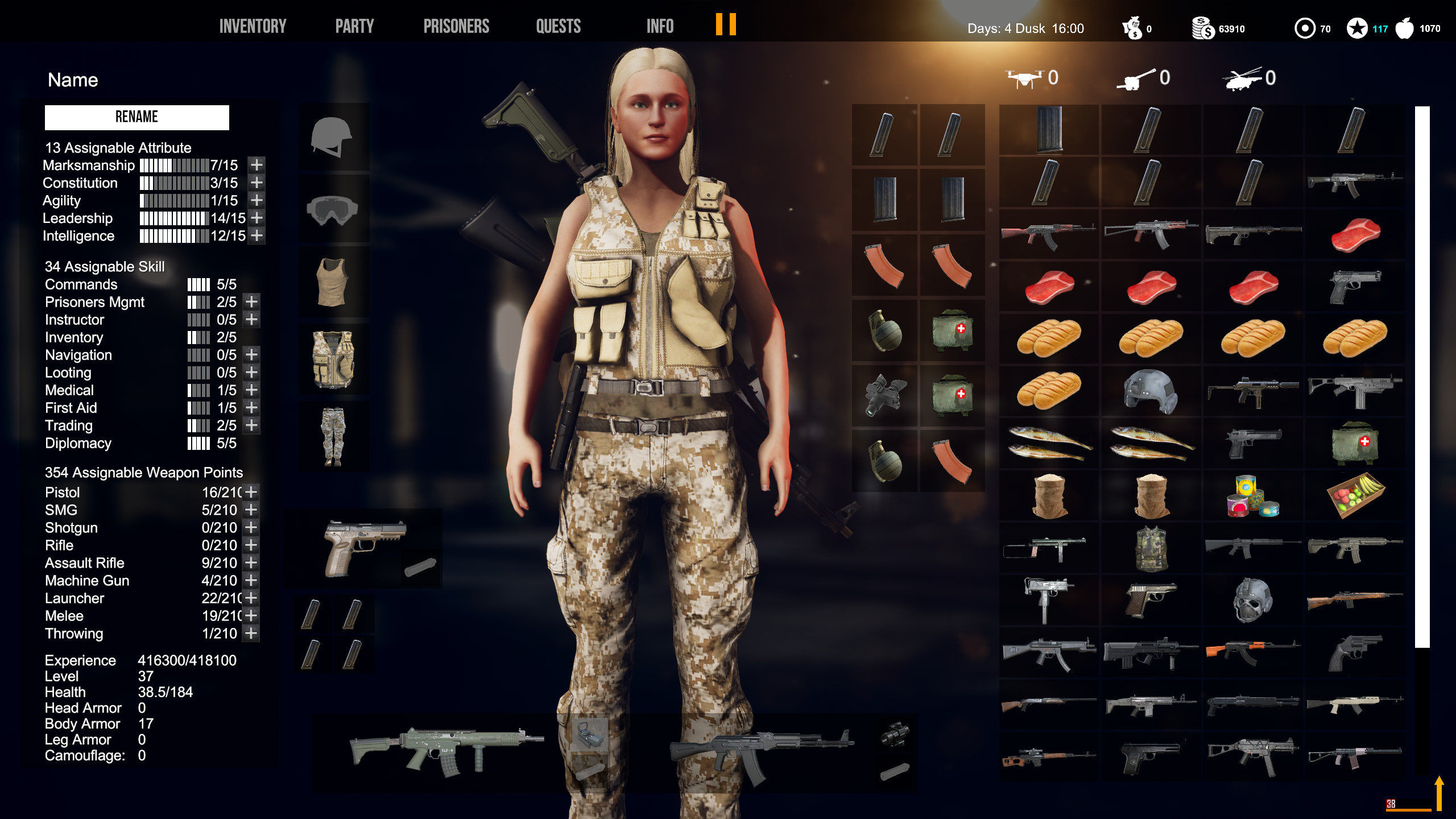 A game in serious need of a tune-up

Freeman overall has a few problems in how it works and, most importantly, how it looks. The menus/UI is the biggest problem for me, as most of it is quite barebones. Looking through menus, or at the damage logs, it’s clear that there’s no flair added to it, nothing to make it stand out. Just basic text that looks at home with a typical unity game, complete with a few spelling or clerical errors.

City/Town quests are extremely boring, often not worth your time unless it’s extremely convenient for you. The quests often entail wiping out a bandit base, training a certain unit to a specific level, or gathering a resource, and aside from being able to gun some baddies down, a lot of these quests are forgettable and often not really worth it. All quests seem to be randomized including the quest rewards. On occasion, certain gather quests could spawn twice in a row or even offer the item you were sent to gather as a reward.

The battlefields you fight on are very bland as well, typically involving sparsely-wooded hills and not much else to look at. The city fights are especially disappointing as the maps I’ve encountered are nothing more than the same hilly maps with a few buildings added in, forgoing any hopes of proper urban combat. The blandness of each skirmish is compounded when/if you engage a smaller hostile group. Each map is fairly large, and with both sides placed on near-opposite sides of the map, it takes a while to even make contact with the enemy. With smaller groups, you’re struggling to find that group (who may or may not be moving around), making each encounter last far longer than necessary. To top problems on the battlefield off, I’ve had plenty of instances where the enemy can shoot through parts on trees or the ground itself. I’ve had to double-check to make sure I’m not going crazy, and sure enough, I’ve been assaulted by a son of a birch… through a birch.

Sound design, especially involving the overworld music and gunfire in skirmishes are both in desperate need of an upgrade, though the former might just be a personal gripe. It seems like there are only two or three pieces of music for non-combat use. Considering this is a game where you’re meant to spend a significant amount of time in, that music just might make you go insane. Regarding weapon sounds, they don’t really sound like weapons at all. Each gunfight, while it’s easy to overlook the noises when things heat up, the guns overall just don’t sound right. 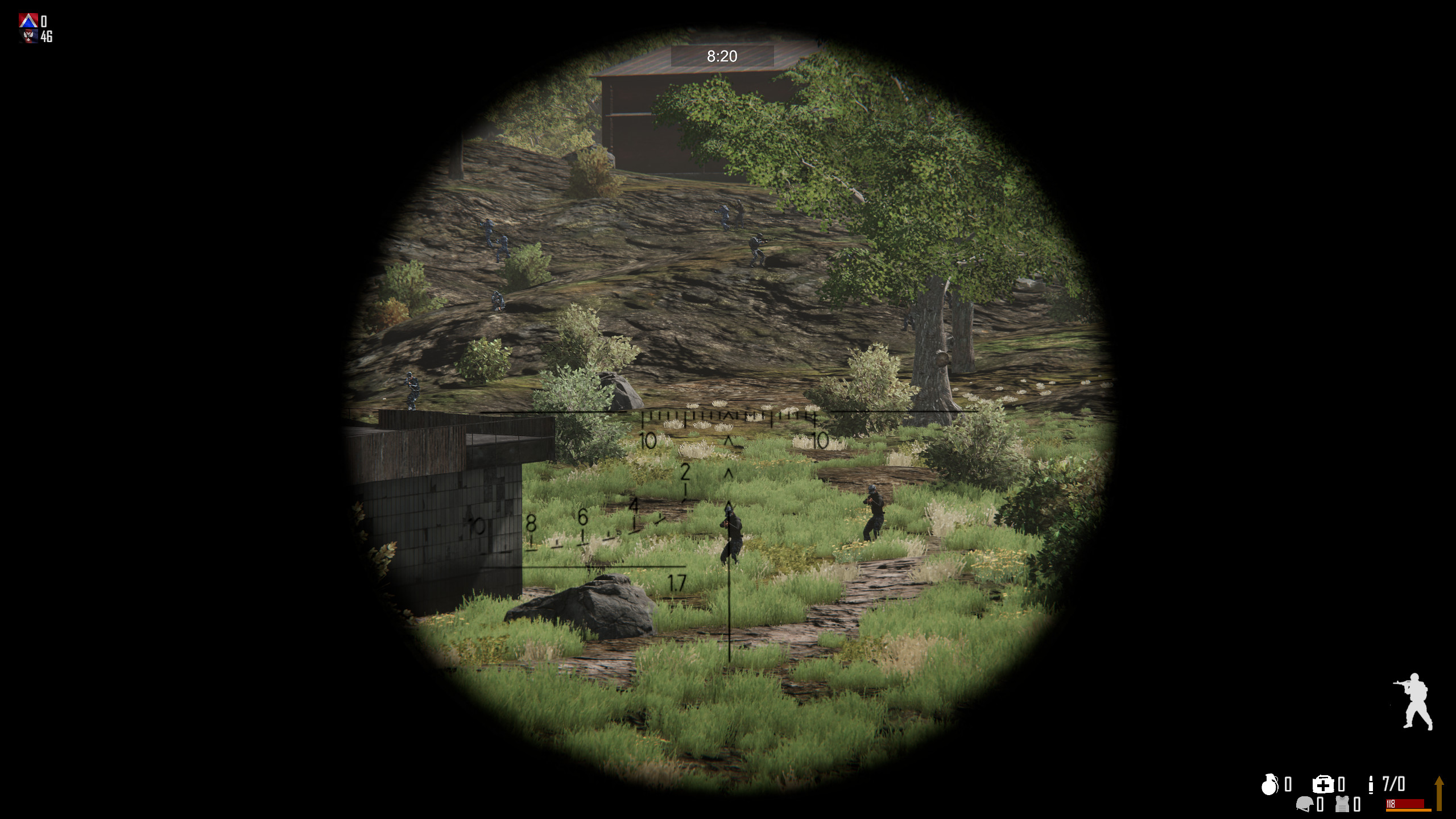 Freeman: Guerrilla Warfare does well making an all-too-familiar core feel fresh and different. However, the game’s many design flaws turn the overall experience into a bit of a slog after a few hours. Wait for a sale if you can, or for any potential tweaks or changes to make the experience more enjoyable.