A brutal 2D platformer that has you slay hordes upon hordes of alien monsters to the sound of heavy metal music.

We play as Therion, a tough as nails guy who returns to his home planet Valfaris and finds that it has been taken over by darkness and pestilence, so, with the help of an A.I and lots of deadly weapons, he decides to cleanse the planet and kill those responsible for its downfall. That pretty much is the backstory behind the game to set us up on our action-packed journey. The story is barely touched on throughout the game. The vast majority of the focus is on the fast-paced gameplay where we traverse from one area of the alien planet to another, facing more and more challenging horrors the deeper we go, and all to the tune of heavy metal music.

The gameplay is very reminiscent of the linear old-school 2D shooters, such as Contra series or the lesser known ones like Doom Troopers. Most of it is very fast-paced and challenging, mainly the run-and-gun fun. You are forced to be on your toes the entire time, because the challenge never really slows down, and oftentimes the pacing changes from swarms of weaker enemies to bosses and mini-bosses. 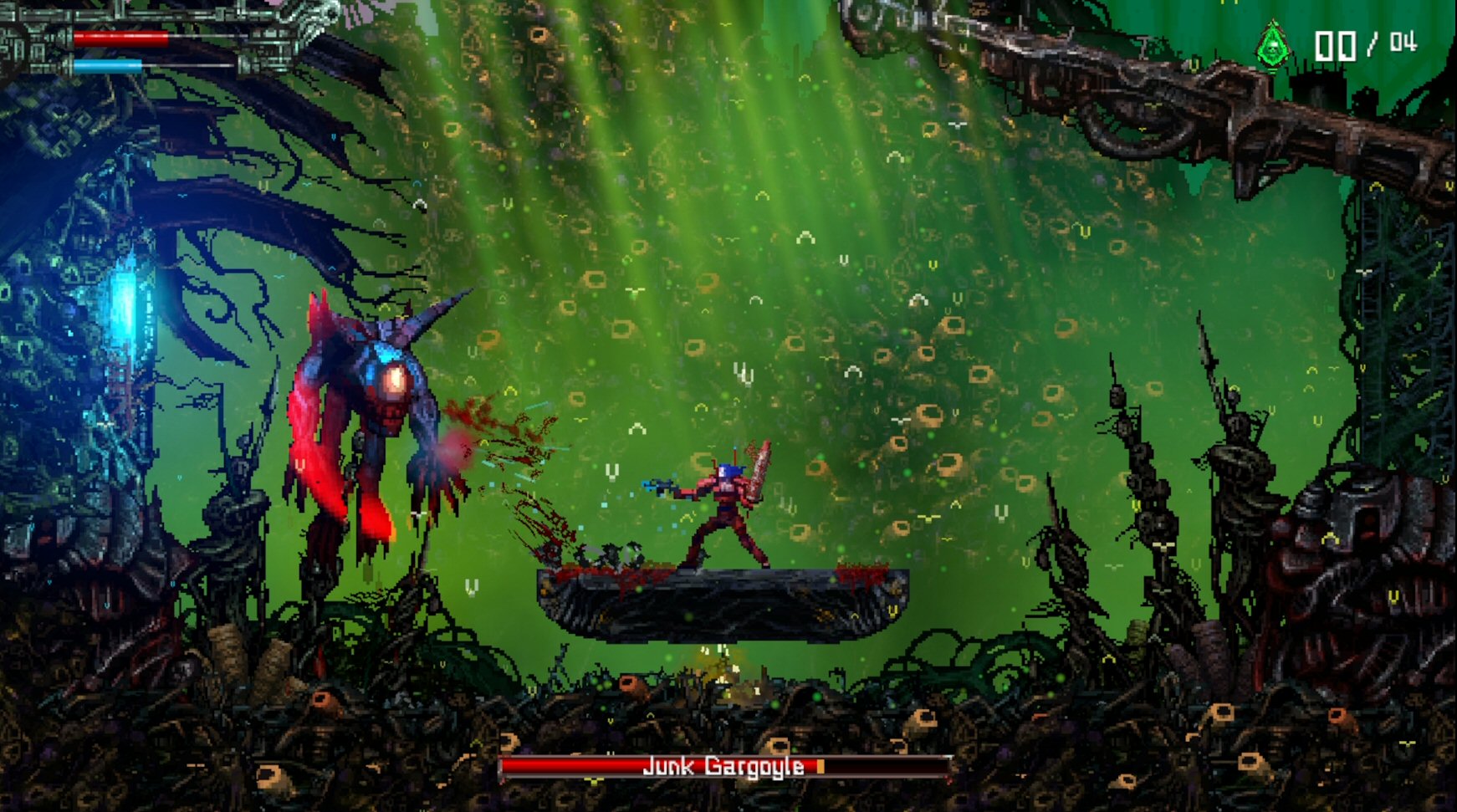 In order to tackle these challenges, the game comes with a respectable arsenal of weaponry. We start only with a plasma pistol and an energy blade, but over the course of the game we pick up more and more weapons, and we can only carry 3 at a time – a handgun weapon, a melee weapon, and a powerful weapon that uses up our energy. We can swap our weapons at each checkpoint, and each weapon has its own advantages and disadvantages to help us deal with what’s ahead. Some of the weapons we come across are a machine gun, a flamethrower, a missile launcher, an electric arc gun, and more. 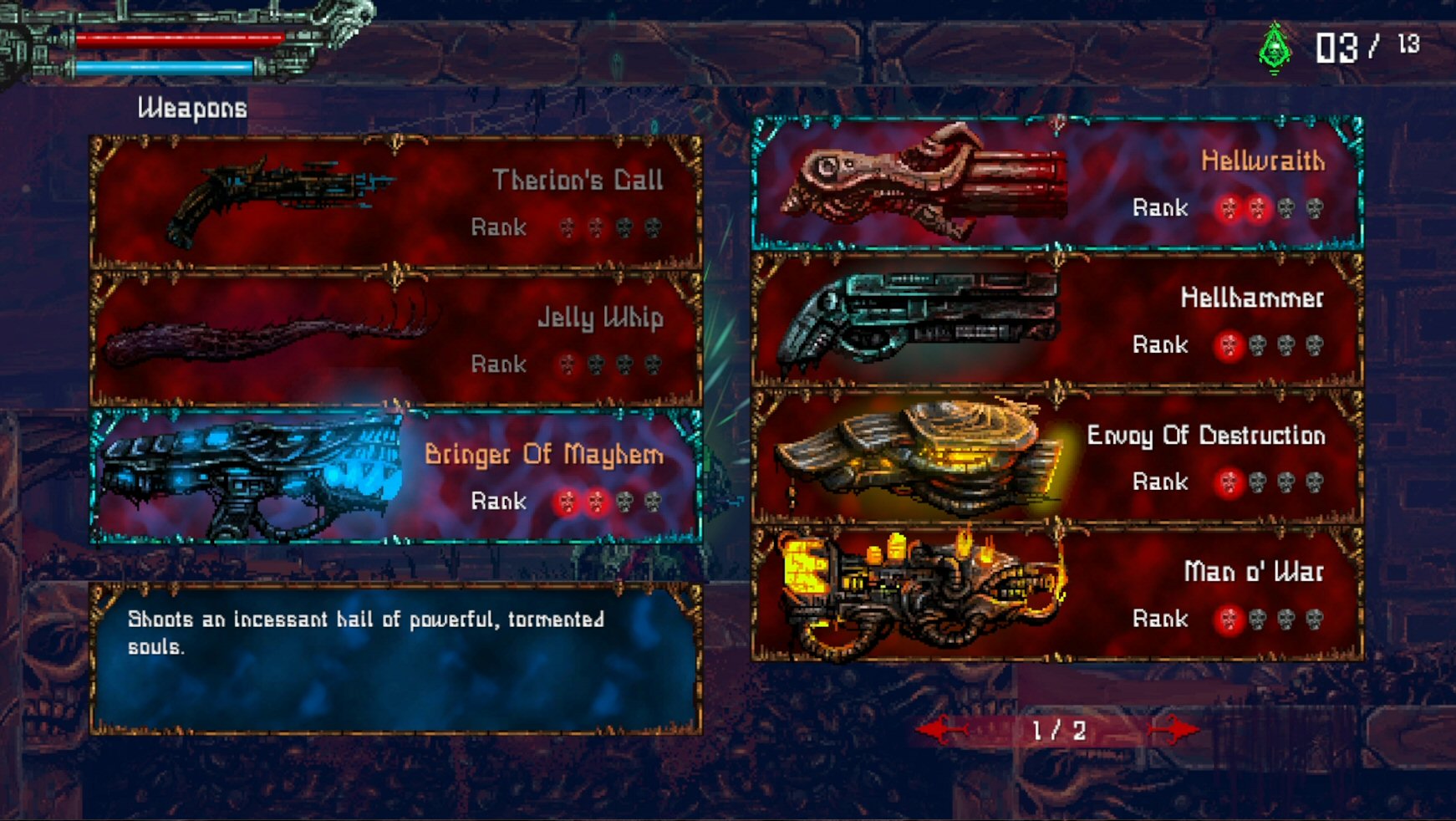 In addition to these, we’re also equipped with an energy shield that allows us to block enemy hits and projectiles, and if we activate it at the right time, it even allows us to parry enemy attacks or to catch their projectiles in mid-air and fling them back at the enemy (although it’s not easy to do these). The shield though also uses the energy, and the energy is mainly acquired by killing enemies with our melee weapon, so getting upclose to enemies is a good idea, and oftentimes the upclose attack can be deadlier than a gun and one-hit-kills most grunt enemies.

The aiming is something that has come under criticism from some players, and it was something that I noticed to be a bit of an inconvenience as well when I started playing. We can only aim our weapons horizontally, vertically, and in exact diagonals. That means we can only aim in 8 exact angles, which feels a bit like a cheap layer of difficulty. So, oftentimes you have to position yourself perfectly in order to hit an enemy, especially if that enemy is located diagonally from you. This of course is tricky in a fast-paced action and can get annoying.

The game makes it clear to us from the very first level that it’s packed with challenge, and you’ll find yourself getting killed numerous times even on the first stage. The game is quite generous with checkpoints, however, so we never really have to replay large sections of a level if we die. Rather we can get back very quickly to the part we died on, which I greatly appreciate, because it respects player’s time and also keeps them engaged as it doesn’t make them redo a section they’ve already beaten.

As mentioned before, there are many bosses and mini-bosses thrown in, as well as parts where we face packs of grunt enemies. In many parts there is some platforming to be done or obstacles to be overcome whilst fighting groups of enemies. Some of those parts were executed really well, while others can leave you really frustrated. 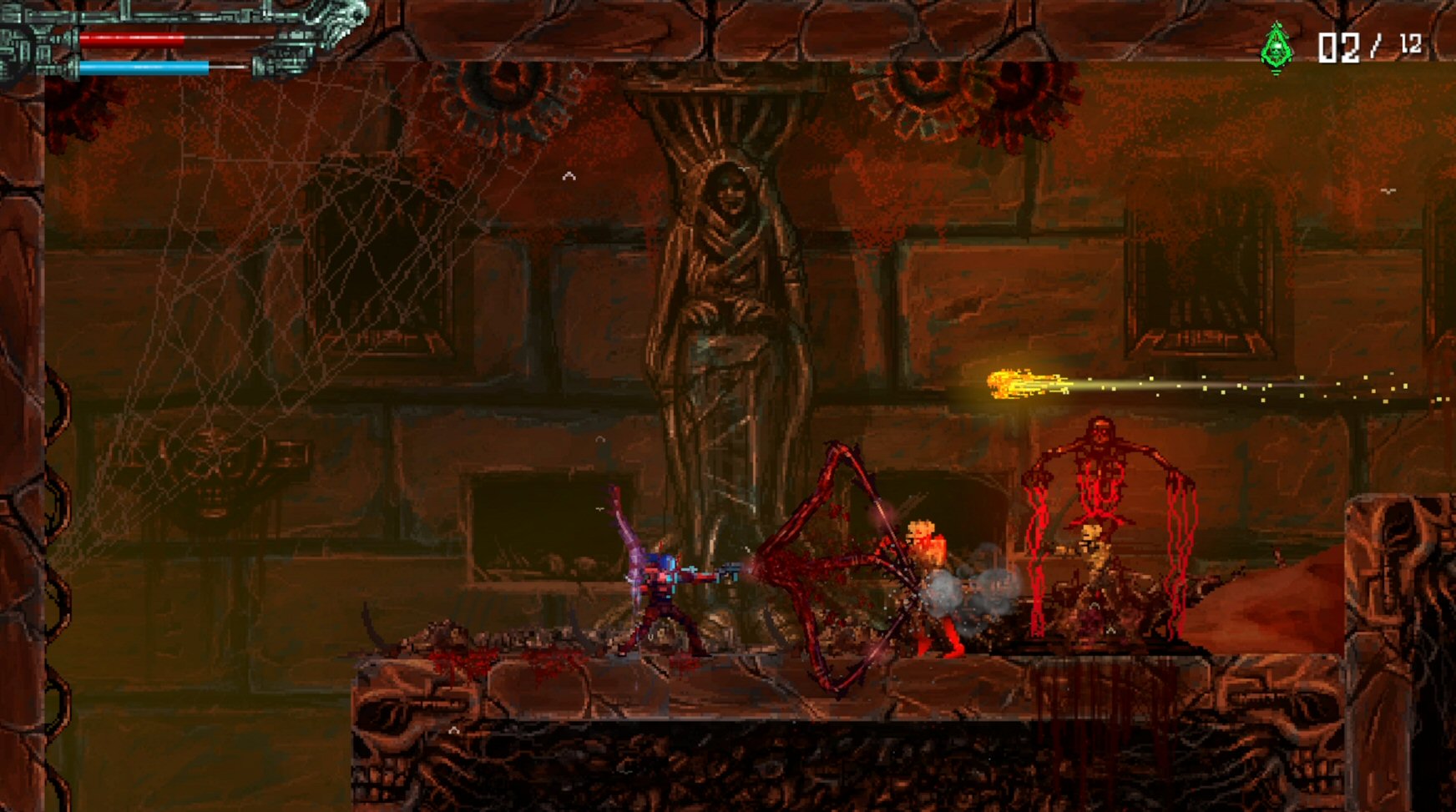 The parts I’ve particularly disliked were those where grunt enemies would keep spawning or respawning non-stop while you have to climb up somewhere or avoid obstacles or even while you’re fighting a stronger enemy. There are too many parts like that and most of them are more annoying than rewarding, whether it’s pesky wasp-like enemies that keep stinging you, the little mechanical drones, the undead hounds, or jelly-like blobs that keep rolling downwards non-stop. Most times when I overcame those parts, I didn’t feel a sense of achievement. Rather I felt that I simply got lucky and was relieved it was over.

In that sense, overall the game didn’t feel to be as rewarding as it had potential to be. Don’t misunderstand, it’s hell of fun and is incredible in how much carnage it allows you to do, but it’s also just as stressful as it is fun.

I think most of the boss fights were executed well and were fun, because with boss fights it was mainly about figuring out their attack pattern and devising a strategy to dealing with them, which gave a better sense of accomplishment once we’ve beaten them. Although far too many bosses liked to self-destruct upon death and steal victory from you, and one boss even actively runs towards you to do that (I died more times to him self-destructing than in an actual fight with him, which was annoying as I had to keep beating him again and again just to redo that final part again and again till I simply got lucky and managed to stay away from his area of explosion). 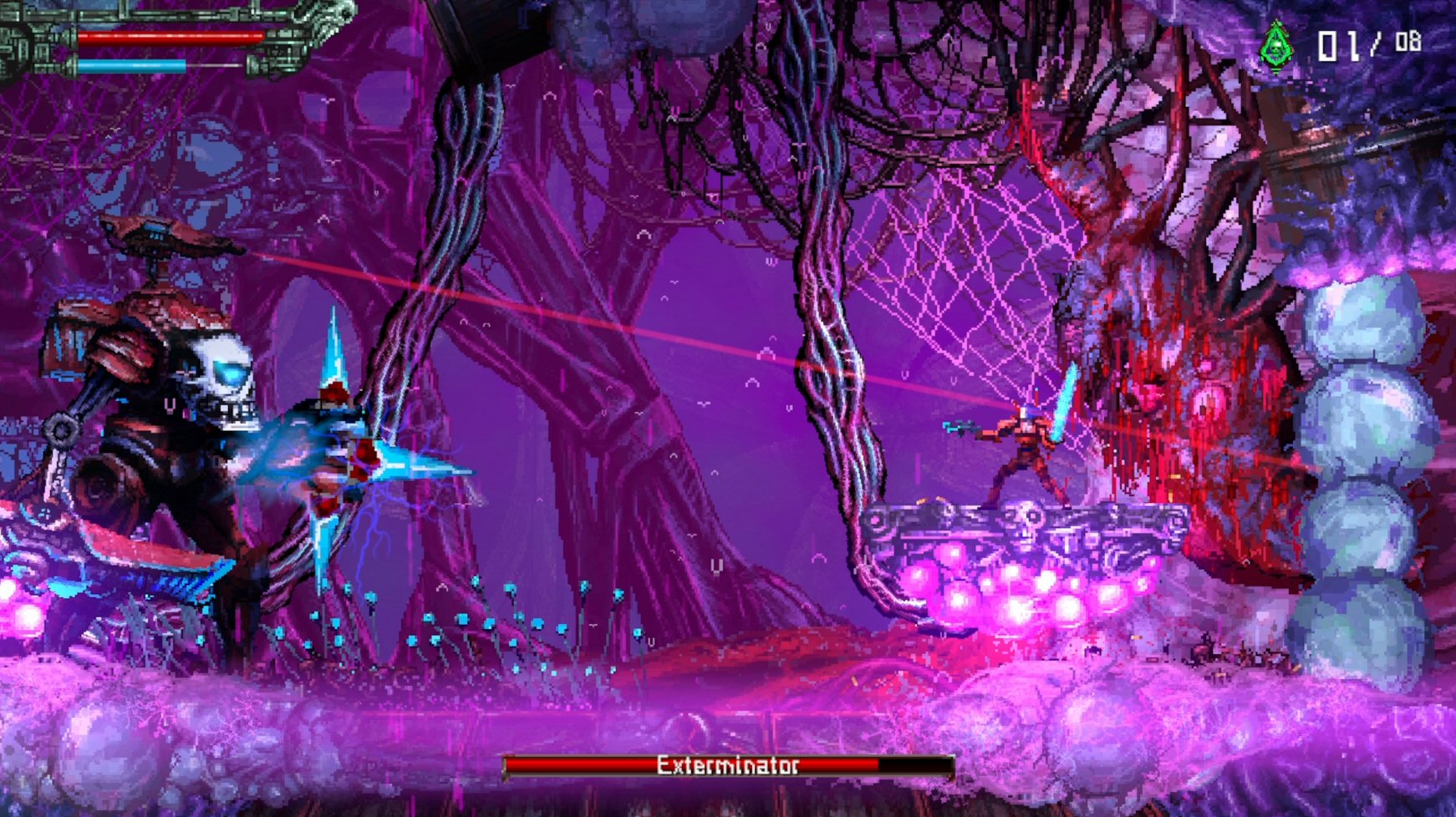 The first two stages (the landing area and the insect/plant biome), I thought were perfect in every sense and didn’t have any annoying parts from what I recall. It’s mainly after that when cheaper types of challenge started coming in, such as the aforementioned parts of constantly spawning enemies that would harass you, and beating many of those parts simply felt like a trial and error affair, that you just have to keep trying again and again till eventually you manage to do it out of sheer luck. At times there would be so many enemies on screen that the whole screen just gets filled up with bullets, fireballs, lightning bolts, blood sprinkles, and giblets, and it gets far too messy and chaotic.

There are a few parts of the game when we get to pilot a mech, and it’s pretty cool and a nice change of pace, but control of the mech is very clunky and uncomfortable, so there have been mixed feelings from me on those parts.

Do you like stunning pixel art and metal music? Valfaris is pretty much the best of both of those. The pixel art is incredibly stunning to the eyes. Gruesomely beautiful enemy and environment designs, a nicely put together colour palette, and a superb amount of detail. It’s gory as hell, all right. You’ll make enemies explode, tear them in half, and burn them to a crisp. Mind you, they can do all of those things to you as well, and you’ll get humbled again and again to see your torso get knocked off from your legs or find yourself getting turned into a firework of blood by more powerful enemies. 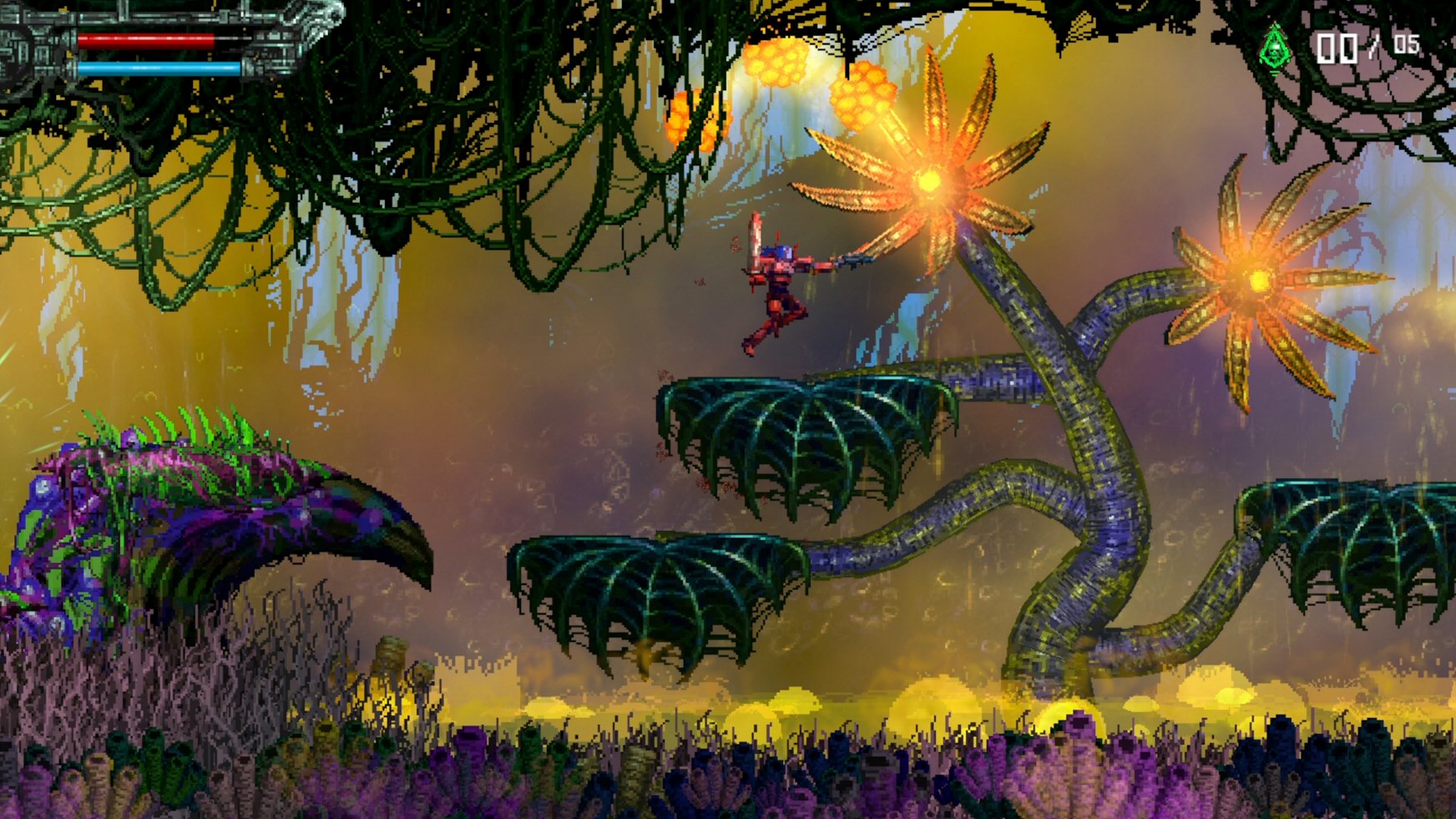 The whole action is assisted by metal music, and it’s some really good metal music, which ranges from faster-paced songs during boss fights to slower, more atmospheric tracks in some of the stages. If you are a metal fan, you’ll love the soundtrack. Although, I think some of the boss fight music can feel a bit repetitive at times.

There is no voice acting in the game, but you will come across some dialogue here and there, usually just before boss fights where both you and the boss exchange some threats and promises to turn each other into dust. Gladly, you won’t have to go through these dialogues each time you die and fight the boss again. The dialogue only plays out the first time you see a boss, and after that if you die and come back, the fight starts right away. This is the kind of thing every game that has boss fights needs to learn from, so huge thumbs up right here. 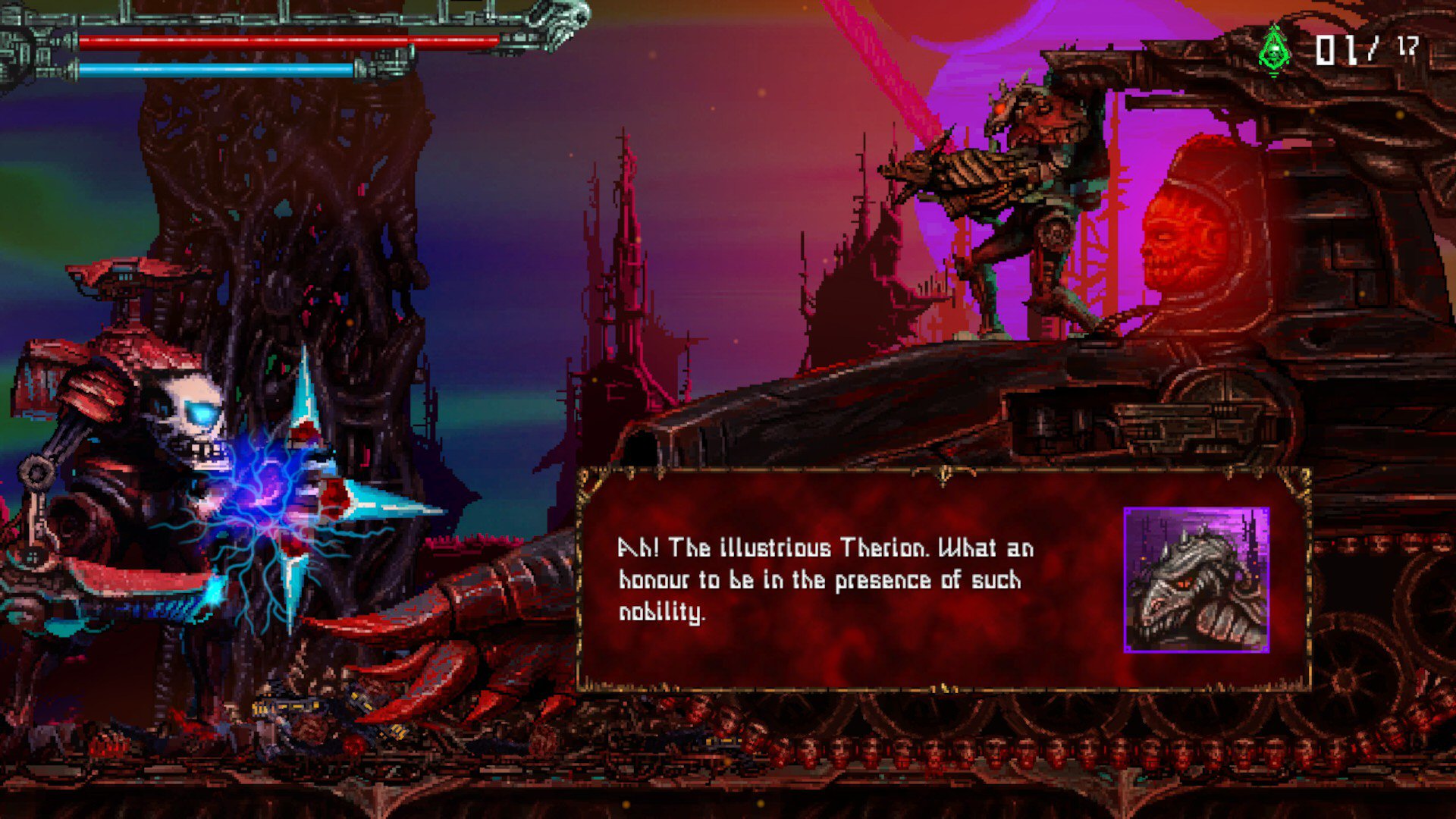 It’s been a tough one to decide the final verdict. This game offers so much fun, but at the same time also so much stress and annoyance. Perhaps I could start by saying this – Valfaris is definitely not a bad game. It sets out a specific goal and it does it right for the most part. It seems to be free from glitches, it’s clearly been created with a lot of love and passion, and it has a superb level of presentation.

But how good it is really I’d say would depend strongly on the player. To some players, this can easily be a game of the year, while others might want to avoid this game completely, particularly since many of its sections can be punishing and frustrating. Based on this, I am going to give it a ‘Save for Later’ rating, as that balances out the fun I had with the game and the frustrations I’ve come across when playing it, including the clunky aiming system. It’s definitely an improvement over this developer’s previous game, Slain: Back from Hell.

Although it did feel that it overstayed its welcome and started to feel way too repetitive. I think it could’ve easily been just 2/3rds of its current length. In terms of playtime, it was taking me over 10 hours (although some people claimed a playtime of 7 or even 5 hours). I think it would depend mainly on how much you die and how quickly you make progress through the stages. Though a length of over 10 hours for a fast-paced action game is fine, so long as the content and feel of the gameplay changes and stays fresh on a regular basis. In here, by latter stages I already felt like I’ve been doing the same thing over and over again and fighting the same enemies just in a slightly different skin. Even boss fights started to feel less inspired and more of a ‘been there, done that’ kind of deal.