For the price of coffee, experience a dark and cynical passion project with an assortment of memorable art, thematic sound design and great laughs.

A Lust for Detail: Spoons and Plates

Kubrickian film theory fetishizes detail. Stanley Kubrick was infamously known for writing lengthy pages of stage directions that would tinker and tailor with the entire mise-en-scene. This obsessive micromanagement of his set and design was not in vain, as his films gained massive critical acclaim. To a certain extent, The Bucket Detective captures that lust for detail. The game is set only in an inner-city mansion, but I would encourage the player to remain still for just a moment. The sound design will immediately reveal itself through a faint but steady air conditioner hum, through the buzz-buzz’s of nearby flies, the stretch of old floorboards, distant footsteps, and ominous door creaks – all in the name of atmosphere and world-building.

The visual design also stands out. Here, the walls have just the right amount of off-white-colored minimalism to persuade me this is reality, but that feeling of comfort is quickly juxtaposed by an assaulting arrange of forks, plates, and spoons that spans entire hallways and living rooms, creating a disturbing sense of uneasiness behind what lurks behind this seemingly innocuous fixation. In addition, the walls are also accompanied by disgusting abstract art hand-painted by developer the whale husband- perhaps in a sense to remind us, as we experience the progression of the game, of how superfluous royalty can be.

Two aspects of Bucket Detective’s creative level-design were also memorable: the shrines and the books. The environment of a level can be crucial for sustaining my suspension of disbelief. For the shrines, here we have Catholic shrines that honor misogynist ideas of the female body, or that marvel a Lovecraftian sea-creature, incentivize me to remain curious and keep the adventure moving. More so when they are interactive aspects of level design. I had fun marveling at crude, yet horrific drawings of Fallopian tubes encroached by an incomprehensible horror of flesh. In contrast, for the books, the element behind them is purely humorous and cynical, but with a clear undertone of social justice. Titles include When Gentlemen Conversate: A Guide to Discussing the Lesser Races, A Brief History of the V[a]gina: A Man’s Perspective to Nazism: Another Chance!. Again, these are interactive as well. The player can pick them up and read sub-titles and reviews by examining the book. 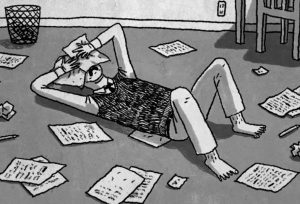 The Story of Gwen Sleevlees

Gwen Sleeveless is a pathetic character. A tragic story of a child raised in abandon as a servant to a deranged cult. You never meet him physically, but by the end of the game, you will have gained valuable insight into what that would be like. The writing behind this character gives him life. His ‘[g]wen boxes,’ journal pages and his ‘[g]arbage room’ all create incredibly visceral images of who he is. A portrait painted by words: there he is, walking hunchback, giggling to himself, showing you around the mansion, eager to invite you to marvel in awe at each room. The writing fleshes out a character out of thin air: literally, you never meet the guy! The cringe-inducing “hahas” at the end of each tragically sad journal entry are delightful. Gwen is, by all means, a ‘nice guy’ neckbeard, and that is revealed in a crucial piece of journal entry that dispels the dark humor behind this title and shines some light on the real dangers of cult mentality and misogyny.

The note details Gwen’s experience of bumping into Beth, the chosen female to give birth to the sacrificial baby. Beth details the horrors of the cult. How they abducted her, starve her, torture, and r[a]pe her. Gwen responds with infuriating delusion. He claims the fathers of the cult would never do such a thing, and that she should stop lying. By the end of the game, you find Beth dead by her birthbed. The important aspect of this, at least to me, is that the creator of this game simultaneously summons a character consistent with the overall tone and mood, and within that, he exercises a piercing social commentary on the dangers of misogyny, violence, and cult mentality. That is proper craftsmanship and incredible writing.

A disturbing, gross, and yet entirely fitting ending arc for Bucket Detective. A beacon of dark humor and witty writing. You spend most of the game interacting with yourself and with the voice of a ghost, just to be assaulted by an old man in the nude, blocking the entrance to the final level. Here, in the birth room, the score gets kicked up a notch. Before it was ambiance, instead now there is an alarming guitar rift that foreshadows the end of the world. Moreover, arguably the best-designed prayer spot is located here. Colorful depictions of a lecher fiend oozing itself into the mansion from every inch and every corner possible. An indistinguishable mass of flesh with multiple mouths. Authentic sketches and illustrations made by the whale husband.

So what? The whole game showers you with good art. But now, here in the birth room, you take off your clothes. You are naked: reborn. You finally see Beth, disgraced at the hand of deranged cultists. You take the bloody baby, and run for your life! Here are where you can run into multiple endings. You can potentially leave the house with and/or without the baby, and watch hilarity ensue through well-drawn and engaging alternate ending cut-scenes. No, I take it back. Hilarity properly ensues if you crawl outside after cutting your legs. You become a perverted masochist who marries a dominatrix that takes care of your mutilated body. You spend most of the game isolated, following seemingly arbitrary instructions only to be juxtaposed to the summoning of the Dark Lord. It’s great and funny. Go buy this game.

Based on this Bucket Detective’s lust for details, it’s creative sound design, and original artwork created by the developer himself, I confidently recommend this game. Veteran horror junkies and casual players alike will appreciate the refreshing nature of this dark, twisted, and cynical piece of work. A soda pop of the indie horror genre, Bucket Detective has humor, originality, and guts. The dismemberment of the protagonist, if that is the ending you choose, will send a rush of adrenaline down your spine that will help when escaping the mysterious cult you have stumbled upon.