Stop the Darn Aliens menace™ in this Sci-Fi action shooter that looks the part, but underneath has very little to offer.

While people are sitting in their comfy chairs and watching reruns of the old, rebooted reality shows, you are a lonely robot standing at the edge of the planet’s exosphere, protecting oblivious bipeds from the occasional attacks from the Darn Aliens™ (if anyone is interested in using this title, I’ll be happy to borrow you the license for a mere 200 pounds of strawberry shortcakes :). The only time the bipeds that you’re trying to keep alive ever notice you is when the alien spaceships start falling down on the planet’s surface like comets as a result of your successful defense. Now I might’ve over-analyzed the game’s story too much, so I’ll put an official game’s quote as well: “Skyrift is an action-filled arcade game in which you, the last robot of its kind, defend the planet against mighty alien forces.” While this is a perfectly accurate description, it does sound a bit too short and simplistic, right? That will become Skyrift’s fundamental flaw as you continue reading this review. But let’s get the positive things out of the way first.

At its core, Skyrift is an action game where you protect a poor planet from ever increasing waves of enemy attack ships for as long as you can, mixed a bit with an Arcanoid-style of catching incoming projectiles and flinging them back at the Darn Aliens™. I cannot tell you how happy I was when I noticed that Skyrift uses Arcanoid’s frenetic action that demands precision and quick reflexes from the player (I just don’t see Arcanoid-like games being developed today which is a shame if you ask me). This is a 3D game, so you have sensors around your robot to signal from where the next projectile is coming from, leaving you a couple of seconds to catch the projectile and fire it back. Your fragile robot is stuck in the same spot, while enemy ships will be all around you, but you do have a couple of tricks up your sleeve. Your basic source of defense is the deflector that you activate with a push of the left mouse button; it will instantly deflect some projectiles such as space cannonballs, but to fling them back at the enemy you have to count in the enemies’ traveling speed and momentum, and push the mouse at the right moment to send the projectile flying diagonally back to the attacker, similar to attacks in tennis. Your second tool of defense is the grabber, you grab certain projectiles when they’re close enough and then you aim and fire back the grabbed projectile, while time slows down thus giving you precious seconds to fine-tune your aim to attack the ship’s weak spots. The last ability your robot has is the shockwave that deflects back all incoming projectiles at once and is extremely useful as a panic button when you have multiple attacks incoming from all directions. 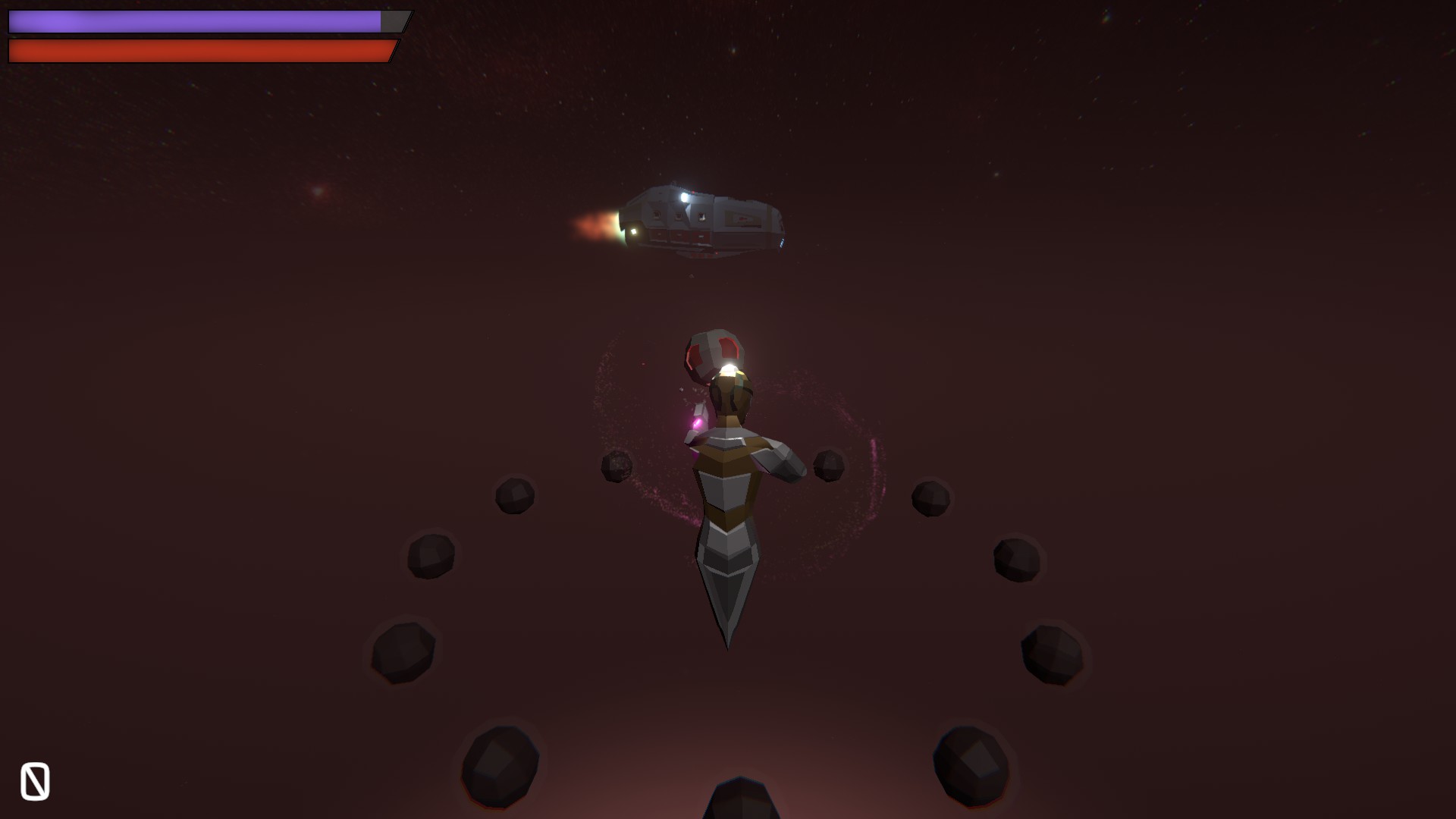 But the Darn Aliens™ also have ways to put you down quickly and efficiently, such as three different classes of attack ships that are armed with different kind of projectiles that are immune to certain defenses of yours. The Rhino is a big and slow ship that uses basic cannonballs for attack, as well as electronic bombs that cannot be deflected, only grabbed and fired back. Giant Motherships show up from wormholes, they also use cannonballs and bombs to attack but are extremely resilient to damage, unless you shoot their weak spots. Lastly, there are the Moths, light and fast cruisers that only use fast and devastating torpedoes you can only deflect, but not grab. All of these ships have weak spots on certain parts of their surface painted in bright red color, and attacking these spots is the best strategy to dispatch enemies in the fastest manner possible when there’s too many attack ships and projectiles that are headed your way. Every time you hit ship’s hull, you can see how bits and pieces of the ship are chipping off, while the ship is gradually engulfed in flames, which is a nice attention to detail from game designers. As you survive longer and you hit more of the attackers on normal or hard difficulty, you are rewarded with leaderboard points as well as with more customizing options for your robot and for the attacking ships, and usually these rewards are new paint jobs for hulls. 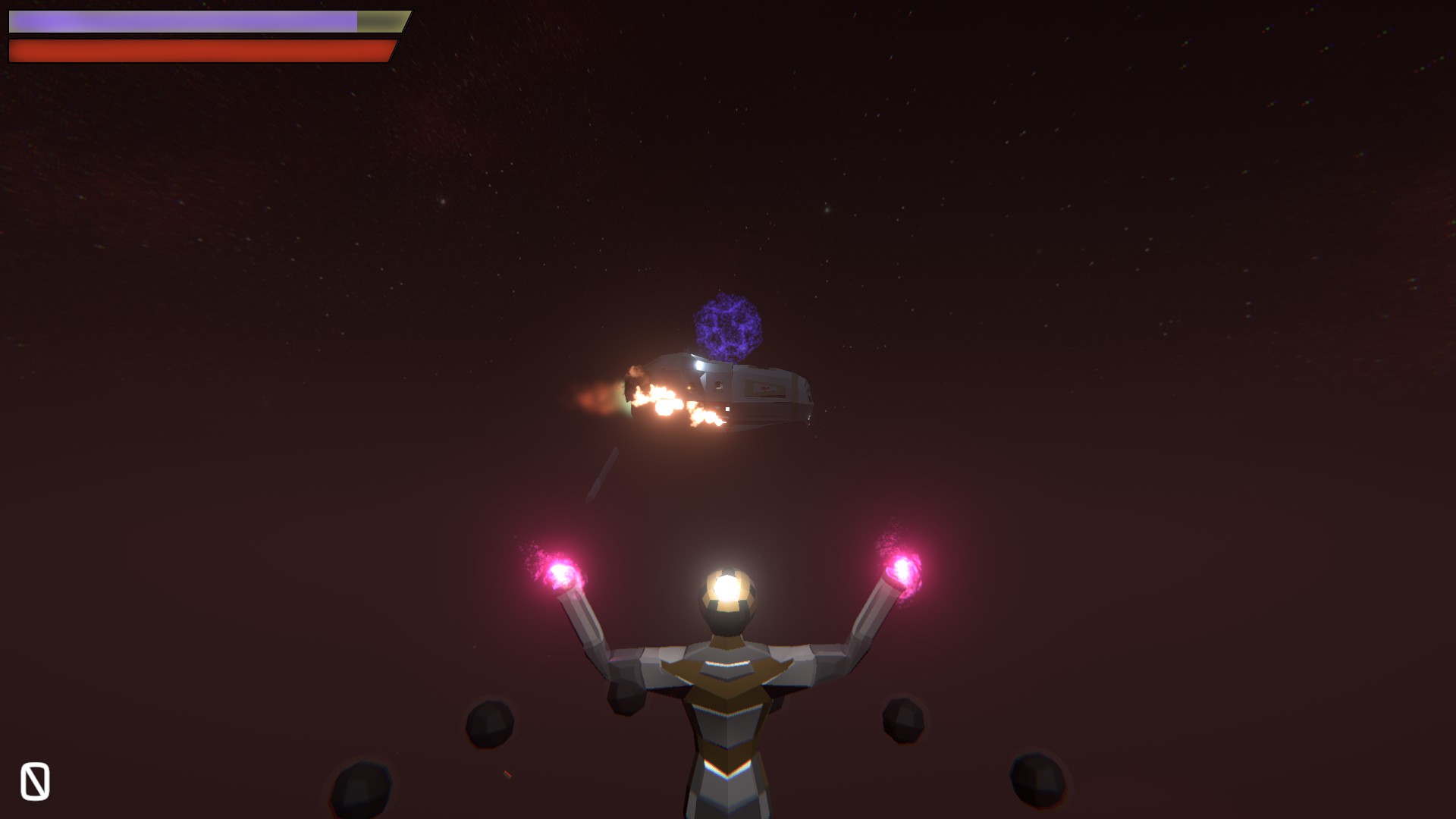 Controls are quick and responsive, and catching projectiles and firing back is nicely done. You have a health bar that can melt away quick and easy if you’re too slow or if you don’t use the opportunities to shoot down the most dangerous enemies first and fast. You also have an energy bar that is used upon your every action: momentary attacks cost very little energy, but you can hold the grabber and deflector up and running way before the projectile arrives, but that usually depletes whole of your energy quickly. The Shockwave is your “last resort” attack and it instantly depletes your entire energy, leaving you defenseless for a couple of precious seconds until energy recovers. 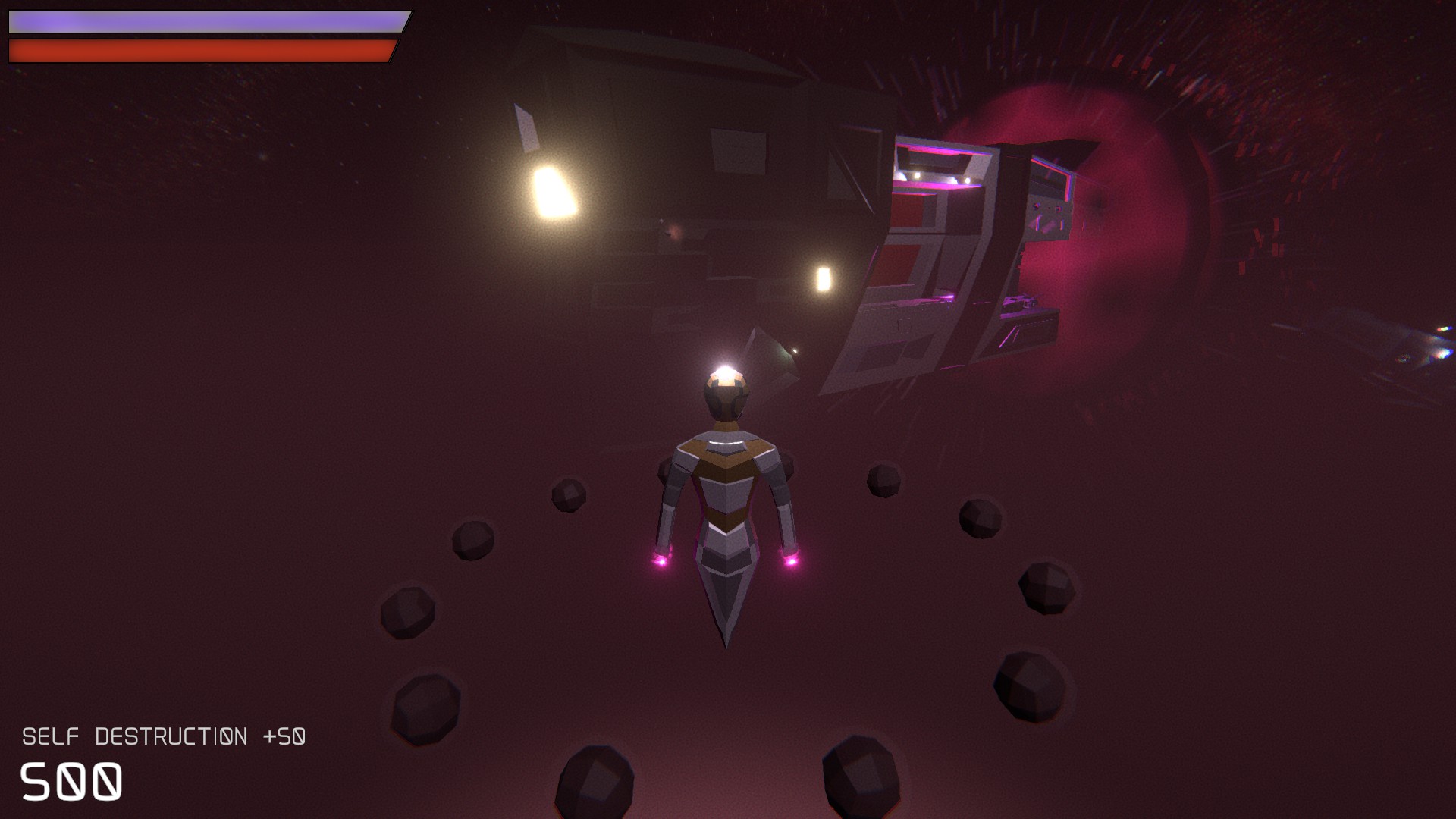 Skyrift looks okay – it’s a simplistic yet effective looking 3D game with nice effects and low-poly textures; the design of the ships is cool, hull damage and explosions are nice touches to the overall decent graphical look of the game. While the sound effects complement the game nicely, music is a mixed bag, with the overly calm and somewhat flimsy piano tunes that just do not match with the action that’s happening on the screen, nor does it fit with the overall sci-fi feel of the game.

Game is very stable; I haven’t experienced a single bug so far, but the first minor negative is that projectiles are very hard to see. You are playing in the relative dark vastness of space, with enemy ships in the distance, and their projectiles that are also mostly black with thin red lines sprayed occasionally. When the ship explodes and they still manage to fire a projectile, I couldn’t see projectiles approaching at all, and their visibility is quite poor overall which will enrage some of the players. But the biggest, fundamental flaw that I mentioned at the start of the review is the general lack of content. There is only one level in the game that you play for as long as you can survive as the difficulty gradually ramps up; there are only three enemies in the entire game, and each one of them has a very limited set of attacks which makes fighting them very predictable. If you’ve played a lot of action games, you can experience everything Skyrift has to offer in around an hour. Skyrift really needs more content, and I would strongly advise the development team to include more levels and enemies in further patches if possible. Maybe add a level where your robot fights in the atmosphere of the planet, where you and your opponents are surrounded by clouds and fog in the desperate clash to extinction; or add a level close to the Sun or some other star that makes your fights more grandiose, while the star’s massive gravity influences how projectiles move. Introduce more ships that have new special attacks and special moves that will make the action more interesting and thrilling. 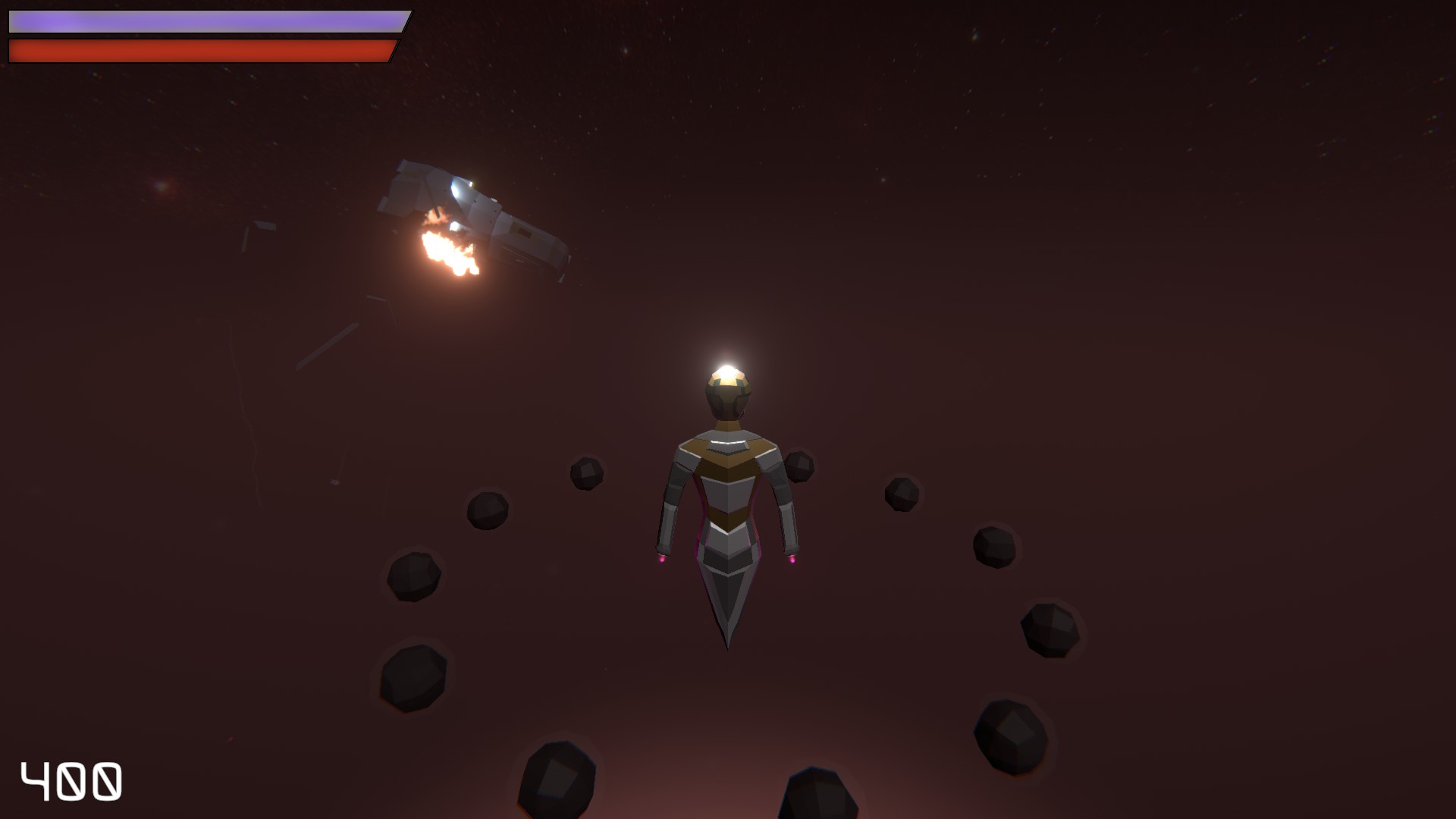 There are a lot of indie games that are “one-trick pony”, which focus on only one thing, either if it’s a gameplay or a narrative aspect that is original or extremely well designed. Skyrift also tries to specialize in providing only one kind of experience, and while the gameplay is decent, the content is just bare-bones and will tire the player easily. I was having fun playing Skyrift, but after a short time of playing, I started asking myself “Is that it? There’s nothing else?”, and that reaction is the last thing a game should conjure. That is why I cannot recommend Skyrift in its current release form to anyone but the most die-hard fans of minimalistic sci-fi action games, but a couple of content patches would make wonders for this game. I urge developers to keep trying, to be bolder with their ideas for future games.