[ Editor’s note: the dev has asked us to mention that the problems outlined here will be fixed in the coming weeks. With that said, we’ve reported on the game as we found it, right before EA release. ]

Unlucky Seven is a keyboard-only “point-and-click” adventure game from Puzzling Dream and Ultimate Games. It’s followed a difficult (unlucky?) path to release, with the original development team abandoning it and a new team picking it up. I think it was originally supposed to be fully released now, but a last-minute decision had it enter Early Access first instead. That’s probably a good thing.

The game’s setting is interesting. It’s a science fiction game, with exotic planets and spaceships, but many of the characters in it can be “furries”: humanoid beasts, such as wolfmen and rabbitgirls. Neither the game itself nor the Steam store page go into any detail regarding the game world, but from what we get to see in the game it’s certainly unique.

Unlucky Seven begins with a chained-up maid android instructed to make its humanoid crocodile boss (and torturer) an alcoholic cocktail made of a number of ingredients, including a human brain and leg. We’re not given any insight into just why anyone would want to drink such a thing, but it seems that said crocodile is an underground TV star who makes a lot of money with a sort of cooking show based on humanoid anatomy alcoholic beverages. At least as far as I can tell. 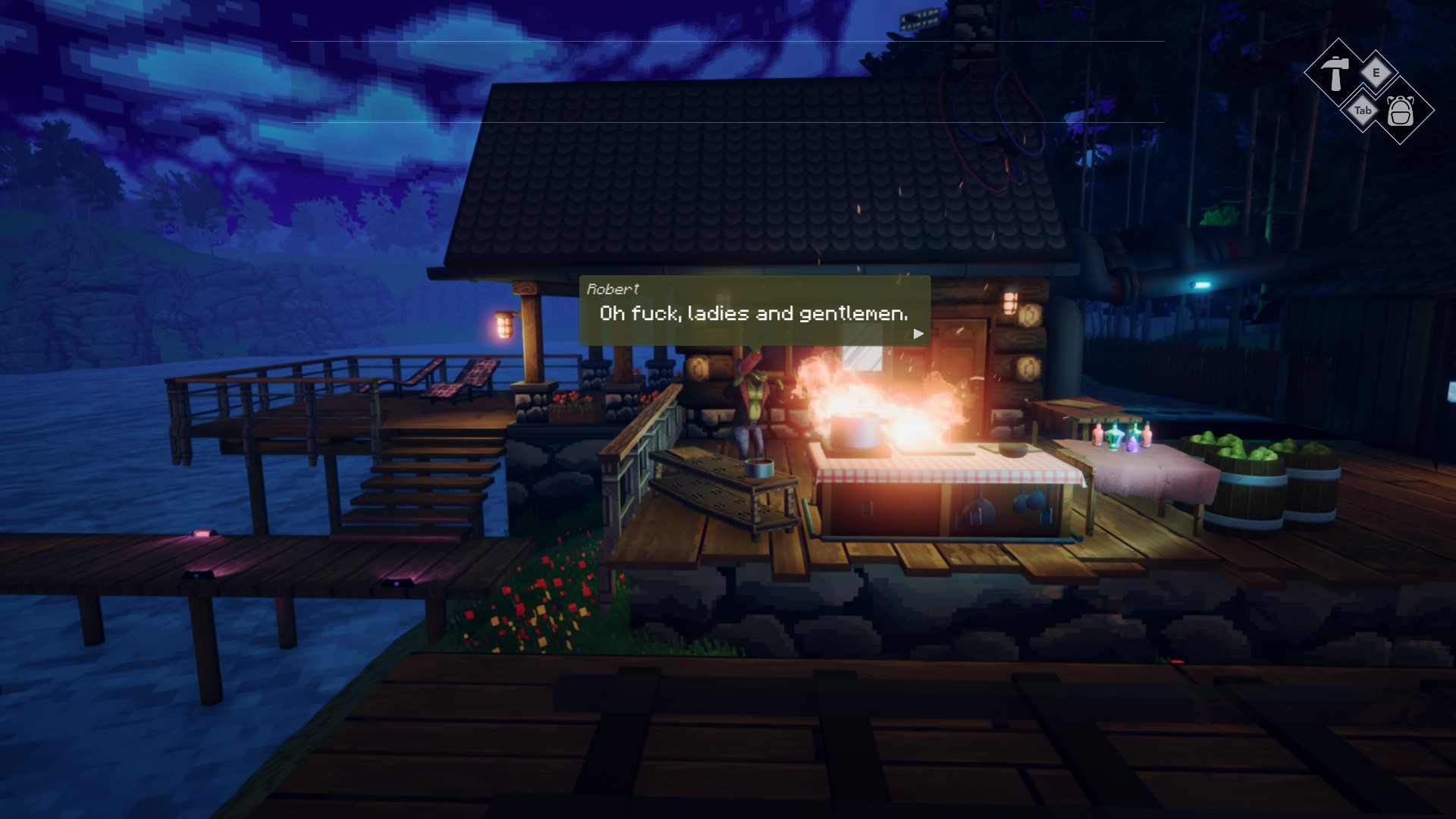 During this introductory scene we learn that there’s an interplanetary Alcoholics Anonymous meeting happening in the same motel in which the crocodile lives, and he plans to capture, kill, and blend all of the attendees into yummy cocktails. The next few chapters — as far as I could force myself to play — focus either on the group of AA members making their way to and arriving at the motel, or on the crocodile making more cocktails.

It all seems extremely weird and rather creative, which makes it all the more unfortunate that the English translation is so terrible as to make it nearly impossible to understand the finer details of what’s going on. Much of the dialogue doesn’t make sense and reads like a machine translation. The few obvious attempts at humour are very adolescent, falling rather flat indeed. So while I think I understand parts of the plot from a high level, the writing is poor enough to make it frustrating to play. I quickly got to the point where I just skipped the dialogue as fast as possible; since it didn’t make much sense anyway. 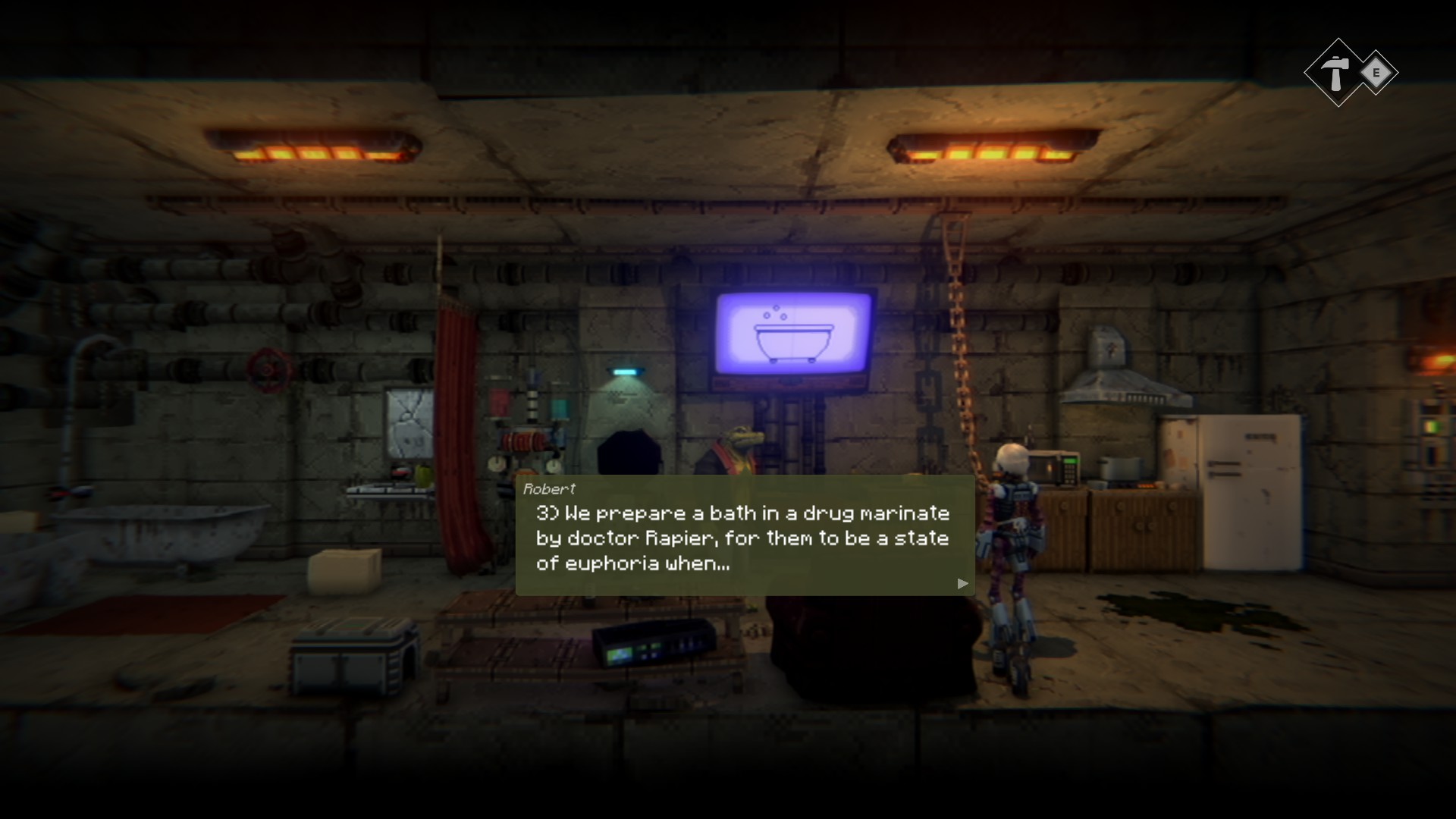 A keyboard-only point-and-click adventure seems like the best way to describe Unlucky Seven’s gameplay, though “point-and-click” doesn’t quite fit, obviously. Perhaps “press-and-press” would be more appropriate, if rather less descriptive.

Anyway, the interface is extremely minimal. You move about with WASD or the arrow keys (not configurable) and press E or ENTER to interact with highlighted objects. TAB brings up the character’s inventory, in which you can move left and right to examine objects or press ENTER to use one on the highlighted in-game object. There’s no way to combine inventory objects, removing a whole class of traditional puzzles.

In fact, the puzzles I’ve seen so far seem to be repeated over and over and involve either picking up random items and using them on an interactive object in the game world — either obvious or trial-and-error, like the first cocktail puzzle; or playing one of a small number of simple minigames, in which you have to turn dials or rotate pipes, or play a really basic sort of Frogger. They’re all lacklustre and repetitive, almost as if they were an afterthought to the game. 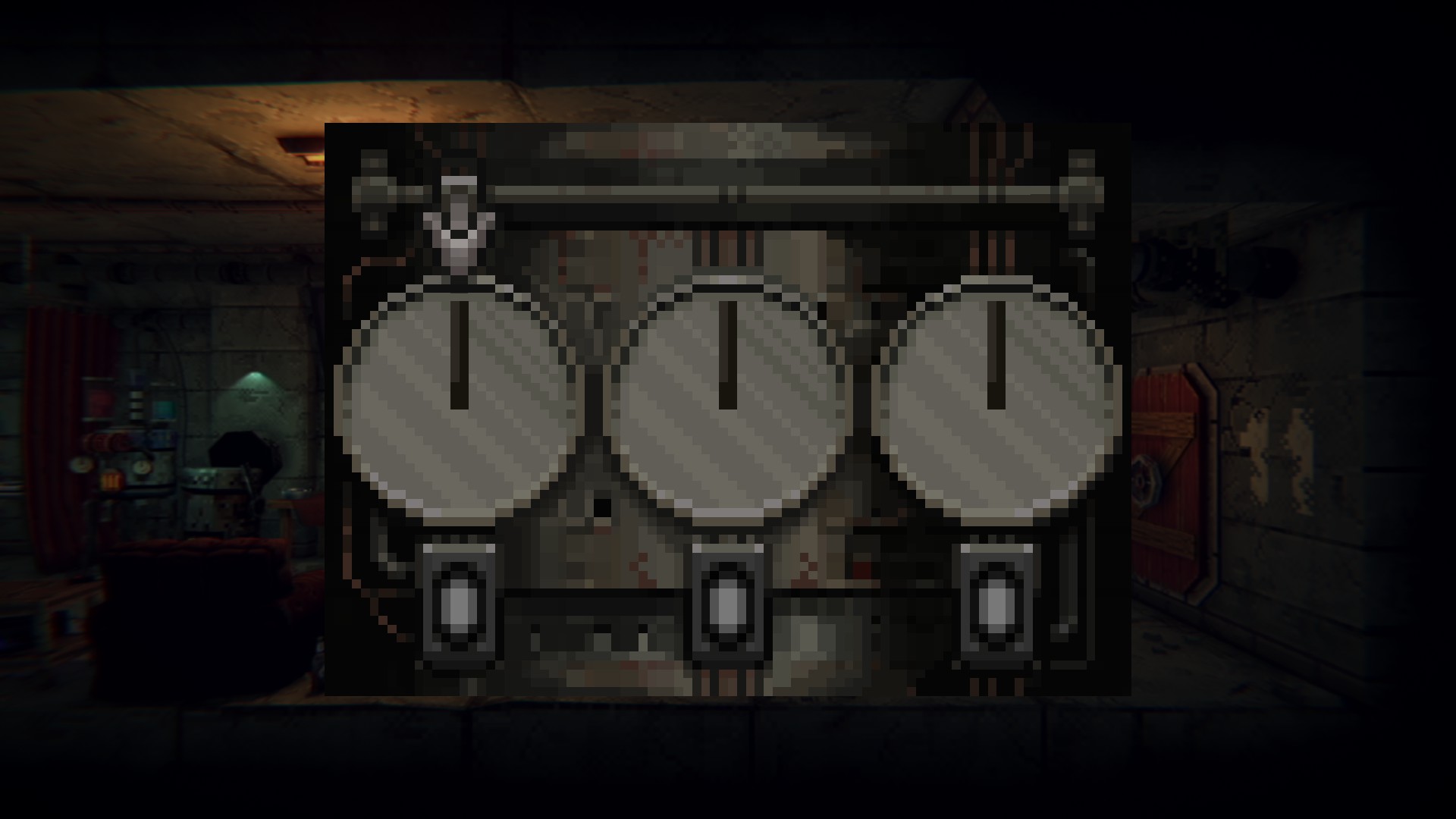 Each scene is made up of one or more layers, giving the game a slight three dimensional feel to the gameplay. Little arrows indicate when you can move into or out of the screen, but interactive objects are only highlighted on your current layer. Some objects are only highlighted after you’ve performed some other action, too, so even though each scene is very small, you’ll still find yourself backtracking a lot to get to previously hidden objects.

To make this backtracking worse, the walking speed is really slow with no way to increase it. You know how most modern adventure games have a double-click to move rapidly to a location on the screen, or something similar? Well Unlucky Seven doesn’t have anything like that. You’ll spend hours walking slowly across the screen and back again. Sometimes you’ll even have to wait for other characters to join you, walking equally slowly of course. 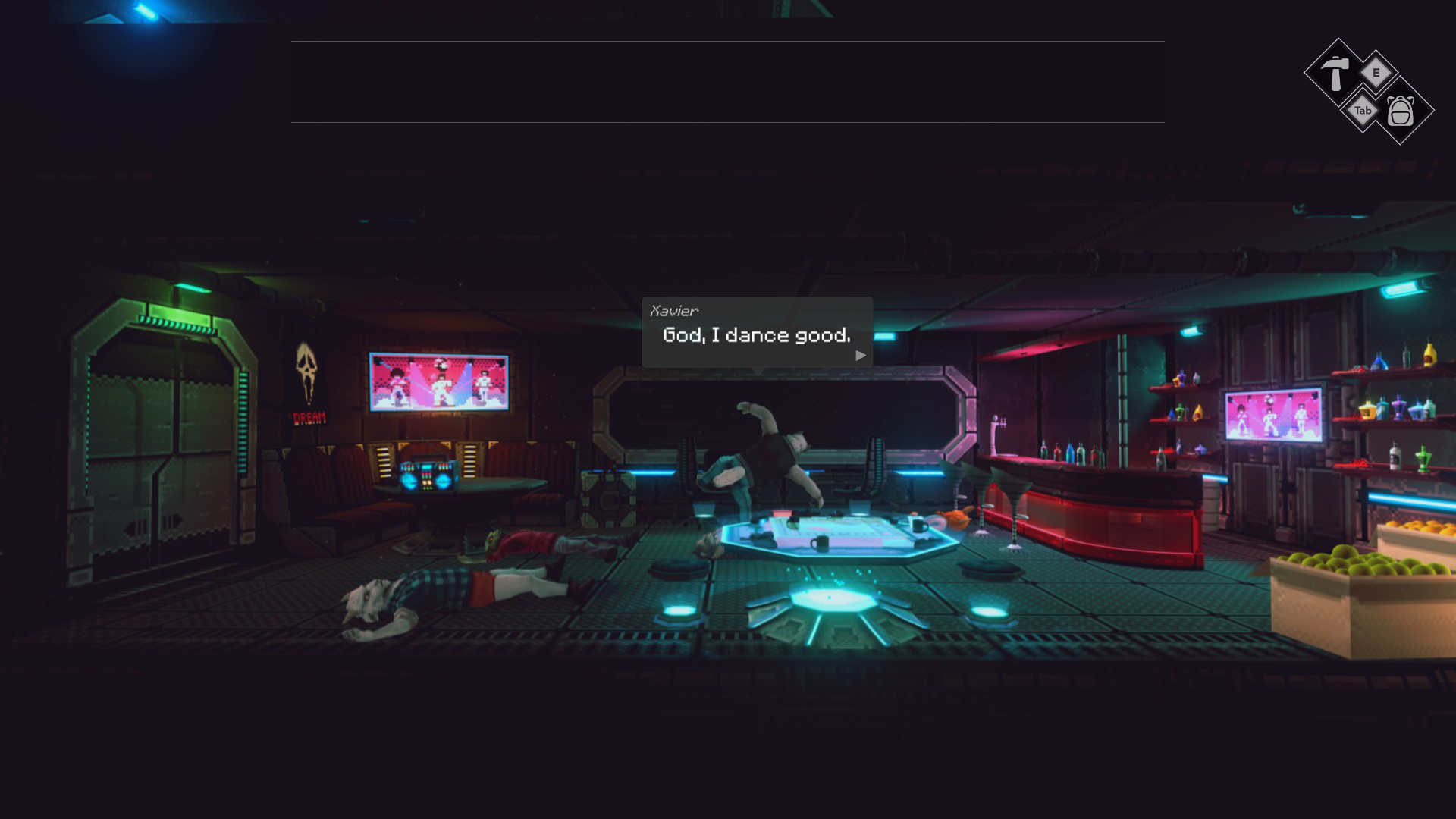 From detailed, grisly looking interiors, to beautiful vistas, the scenery in the early chapters, at least, is all exceptionally well made and shows a great attention to detail that’s lacking in almost everthing else in the game. The characters, too, look detailed and very much like I expect a furry character to look, with mostly very believable and realistic animations as well. I’ve seen a few minor clipping issues, however, and the movement speed is a real annoyance.

Special effects, too, are excellent, from blood spurts when the android cuts off a corpse’s leg, to flames from a burning stove and lightning from an outside storm. Unlucky Seven has some of the best HD “pixel art” I’ve seen anywhere. It’s fantastic! 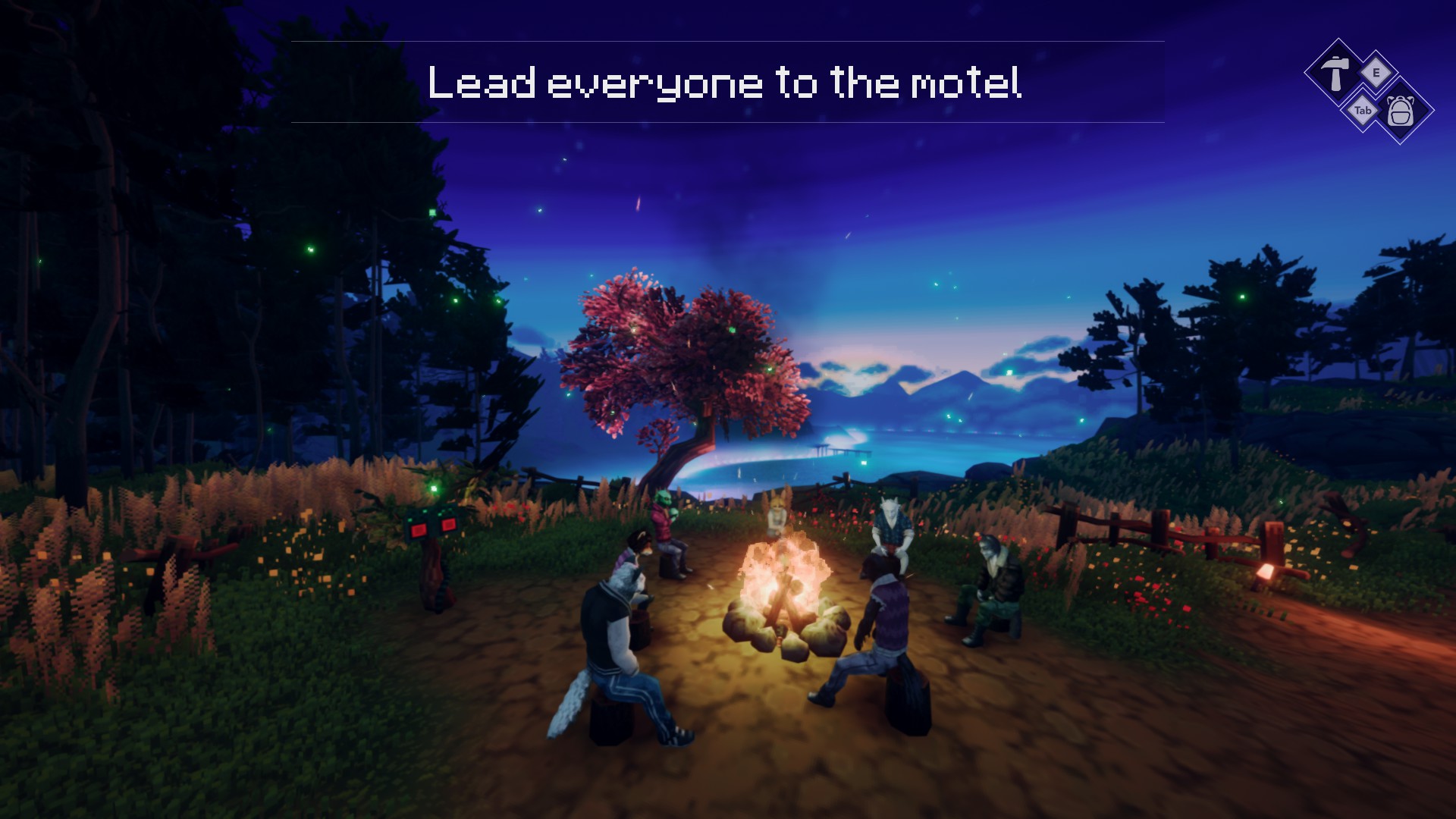 The very well made and perfectly suited atmospheric music is also excellent. Sound effects are mostly okay, but footsteps are way too loud, especially on natural terrain. Please believe me when I say that you do NOT want to turn on the English voice acting! While the default sort-of Sim-ish murmur that the characters use when talking normally is fine, the “dubbing” option has them elicit some of the worst voice acting I’ve ever heard. It is truly awful.

Performance is mostly good on my three-year-old gaming laptop, but I have seen a few brief stutters every now and then.

I’ve encountered a few other annoyances that didn’t significantly detract from my final score significantly, but still seemed worth mentioning: 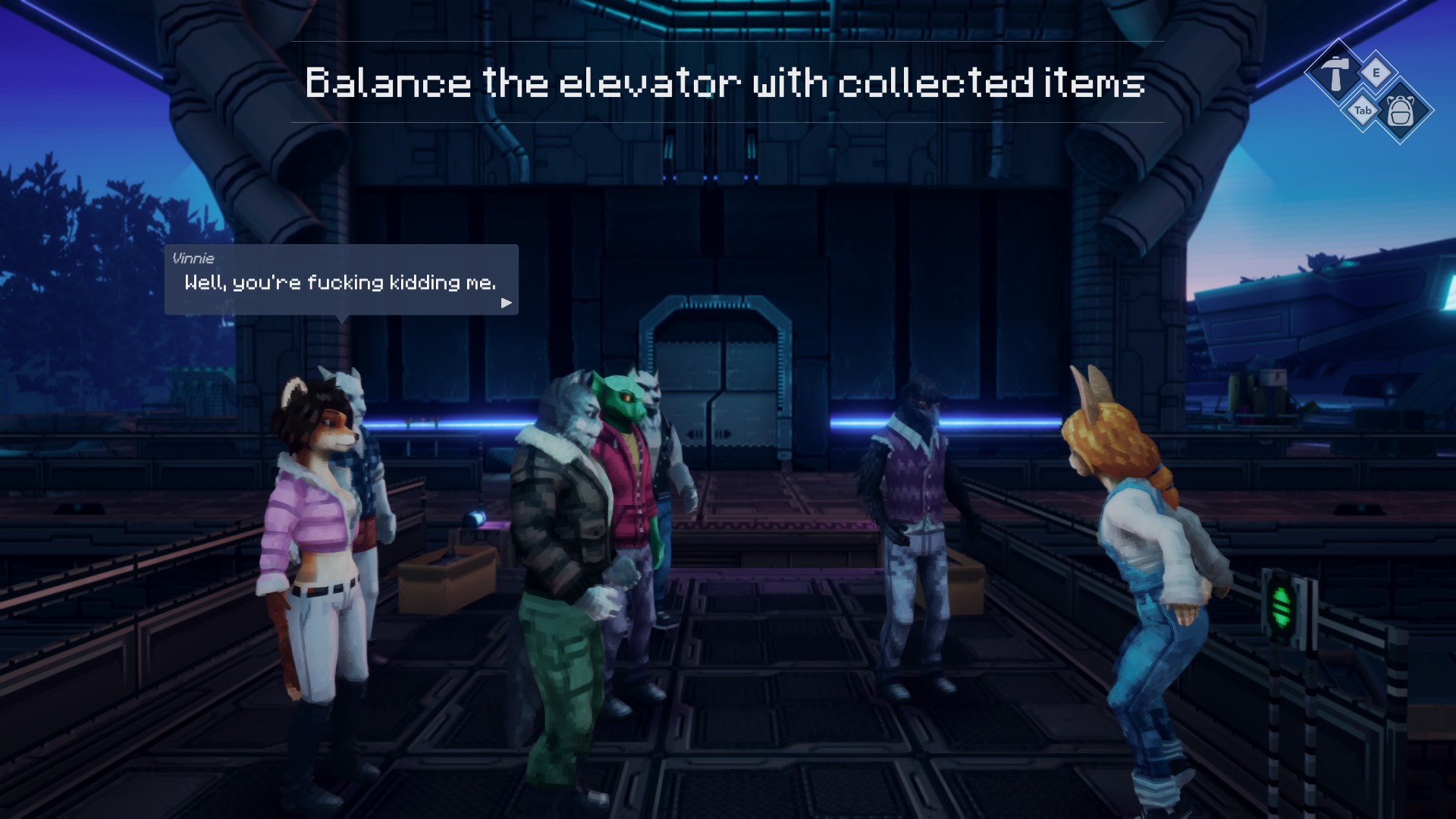 Unlucky Seven oozes creativity and general weirdness and has really great art and atmospheric music. It also has extremely lacklustre and repetitive puzzles, awful voice acting, painfully slow movement, and lots of boring backtracking, even given the very small scene sizes. To top it off, the English translation is so poor as to make the dialog and story nearly incomprehensible.

While the game’s developers expect to have a few months of Early Access, the Steam store page suggests that the focus of this phase will be on fixing the English translation. If done well, this would boost the game’s rating somewhat, but unless the gameplay issues are addressed I fear it may be a lost cause. Definitely not recommended at the moment; time will tell if it’s worth a look once it finishes Early Access.

Thanks for reading this far. Guess what? Unlike the “Seven”, you may be a lucky winner if you’re quick! We have a limited number of keys for this game to give away. Join our Discord server where you will find JimDeadlock#0106 (near the top of the user list wearing a little yellow crown, if he’s online) and send him a private message with the pass phrase “lucky lucky lucky lucky lucky lucky lucky”.