There’s a lot of these games, as I’ve stated before, and we will most likely state again when the next one releases. The series is relatively young considering how many games have been pumped out; five games and in just two and a half years.

The games have always evolved, keeping most all of the good aspects, removing the bad, and trying new mechanics while always keeping the puzzles feeling fresh. I have not once had the feeling that I’ve seen a puzzle before in any of the games in the series, minus the tutorial puzzles, which of course have to be really simple. During this review, I won’t recap the whole history of the institute and it’s many uses. It’s been said before and there isn’t even that much of a plot in these games, so I’ll be concentrating on the puzzles and mechanics themselves.

Let’s go and play with the lasers!

As I stepped out of the subway car onto the platform amidst the familiar futuristic setting, it felt like I was back at a place where I had just left a while ago. Graphically, the institute looks like it always has and it still works. The plain and neutral style feels like it is integrated into this series already, and is recognizable. Just show me a picture of any of the puzzles in any part of the game and I’m quite sure I’d know that it’s Rethink. When the developer eventually decides it is time to change the setting, I’ll be really interested to see what it will be.

At times the outdoor areas on the horizon looked a bit “off” and remind me graphically of games from the turn of the century. I’m nitpicking here I know, but I had to find something negative. Nothing is perfect, even though the interiors with lasers going everywhere look pretty close to it. 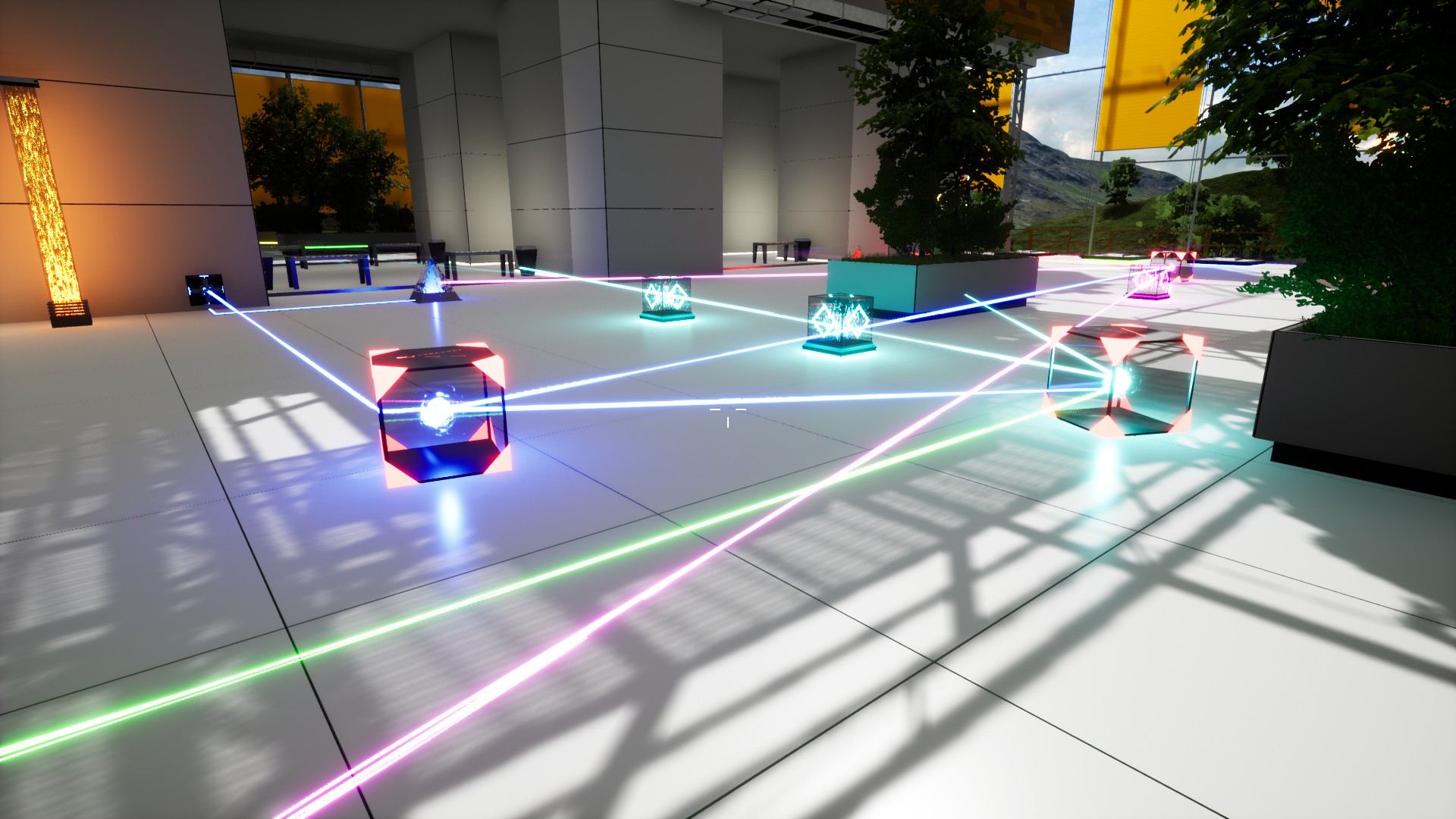 Back the to main attraction: Making my way to the first puzzle and seeing the first fundamental change in mechanics.

These pyramid-type gems gave me a beam this time around, just insert it into a slot and it powers up the corresponding beam. This, again, brought a completely new dimension to the puzzles and opportunities. Previously the place where the beam originated was fixed, but there are a few different options where I can put the beam. It was a change that I have been wondering about for awhile with the thought that it may increase the challenge significantly. Well, it certainly does. Not only do I now need to think about how to direct the beams, I also have to ponder where they are coming from.

The usual things are here, no-gravity zones, reflecting mirrors and cubes that redirect the beam into 2-3 different directions and so forth. But there also is one big new mechanic that I labelled….. THE SPLITTER!

In addition to sounding like a weapon that doesn’t fit among the other awesome weapons in Doom, it also brings a massive change to puzzles. Let’s do a simple example: The splitter is a powered up “gate”. Using the picture below as a reference, let’s take a blue wall. When the red and blue beams are combined it creates a purple beam. Now direct this purple beam into a blue splitter wall. What happens is that it breaks it down again, the blue light gets past the wall and continues forward, while the red light is reflected back. Think of it like a mirror that only lets the right colored beam through.

Looking at the picture below:
Purple beam: The original beam that I directed to the blue splitter.
Red: one half of purple, a “leftover” color that the wall didn’t let past, instead reflected it back like a mirror.
Blue: Other half of purple, same color as the splitter itself, so it gets through.

This created many tricky and interesting puzzles. In addition to deciding which color I power up and where, I also had to think how to set up these splitters. Most times it required that both of the beams, the redirected and the one that continues, also hit their targets. I’m currently at a big open area, consisting of three different puzzles. I loved the idea in each of the Rethink games that a single beam travels from puzzle 1 to puzzle 3 or 4, and this is where I’m currently a bit stuck. I remember the feeling of realizing this the first time in the last game. having to go back a puzzle to “Rethink” everything, and it fooled me again on this newest installment. Well played, Sir, well played.

I stumbled across this “rotating beam” by accident, but immediately saw that it has potential! Maybe Rethink evolves to feature rotating puzzles as well? Unless it again manages to surprise me and feature them in the areas I have yet to see in this installment..

The “oldies” still work well as well and are used more than before, if I remember correctly. There are so many games in this series and they all start to get mixed up in my memory, as old memories usually do when time passes. I’ve noticed feels like there are a lot more corners this time around in the puzzles with one or two goals hidden behind a turn, or obstacles in the middle of the rooms forcing me to double check my plans. Before, at the open rooms I could just look around. This is definitely an improvement! While making the puzzles more enjoyable, it’s also nice to see something else other than an empty room one after another with lasers and cubes. 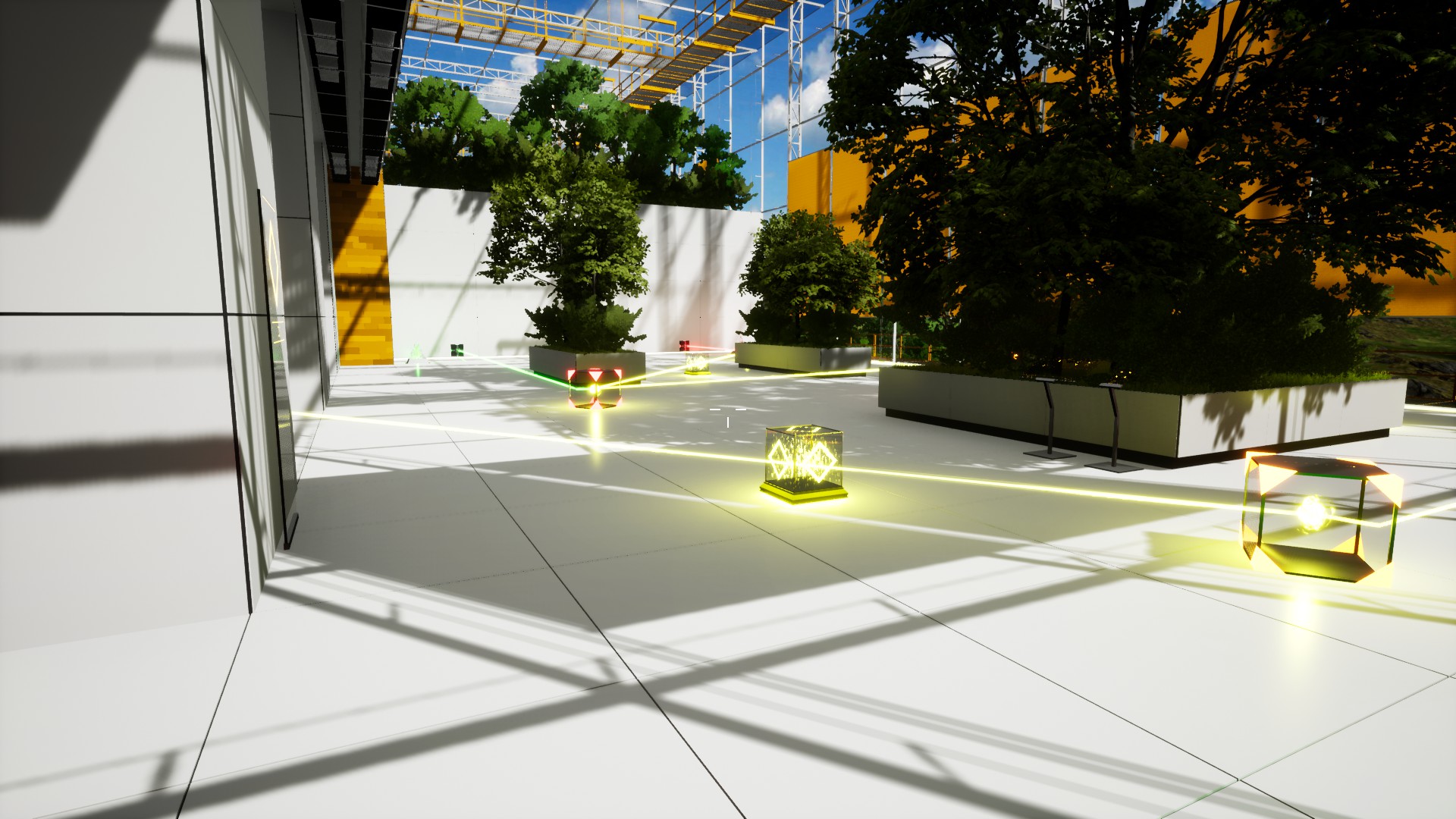 It is, again, a great addition to the Rethink franchise. Once more, the puzzles feel fresh and not recycled. The new splitting mechanic works wonders and brings much more challenge to the puzzles. If you have played the previous versions, there isn’t anything too different about this one. The gameplay itself is smooth as always, cubes work the way they have worked before and the soundtrack is familiar.

It’s just more Rethink-puzzles in the same environment! While that previous sentence might sound like it’s a bad thing, it isn’t. It works, I’ve enjoyed my time with all the Rethink games. They aren’t hardcore puzzle games, but not especially easy either. I can again jump in and listen to a relaxing soundtrack while trying to think of a solution with no pressure from time limits or frustration from unnecessary cutscenes. Just jump in the game, and jump out the second you want to.

I’d say this game, and the series as a whole, belong to a game collectors library and would recommend it for people who enjoy games from all genres, especially for the puzzle enthusiastics.