ARTICLE: Shenmue 3 and E3: An Epic deal that broke the camel’s back
Share:TwitterFacebookRedditPinterestWhatsAppEmail

ARTICLE: Shenmue 3 and E3: An Epic deal that broke the camel’s back

2015: An E3 of Dreams and returning hope to Shenmue Fans

Author’s Note: Like many others, I’m also a backer (100+). Though it doesn’t really affect me that much as someone who requested the PS4 version, there’s a fundamental issue about this deal.

No, not the PlayStation exclusive game Dreams! We’re talking about the announcements. One of such “dream” announcement was Shenmue 3 going to Kickstarter. For many of us, it was a very special announcement for an IP very dear in our young hearts that goes back to the Dreamcast that started at the end of 1999 and found its abrupt premature end with a huge cliffhanger in 2001 with Shenmue 2.

Though Shenmue wasn’t a success, it still found many fans for its unique gameplay style in a world that feels alive and where you could even interact with most of the passers-by. The first Shenmue had an intimate feel because it was in a small city where everyone knew each other. In Shenmue 2 it broke the feel of familiarity and brought in an adventure instead. New faces, new friends and new enemies. It ended after finally encountering the elusive Shenhua who we only knew from some artwork or the opening in Shenmue 1. Fourteen years later there was at last a sign of life, a possibility to see the story continue.

The rocky PR road of Shenmue 3

After the announcement, it didn’t take long before some sites started to spread some misinformation regarding its funding, hampering the Kickstarter attempt. The ill-conceived rumor was about Sony funding Shenmue 3 while they are raking in more money with Kickstarter: 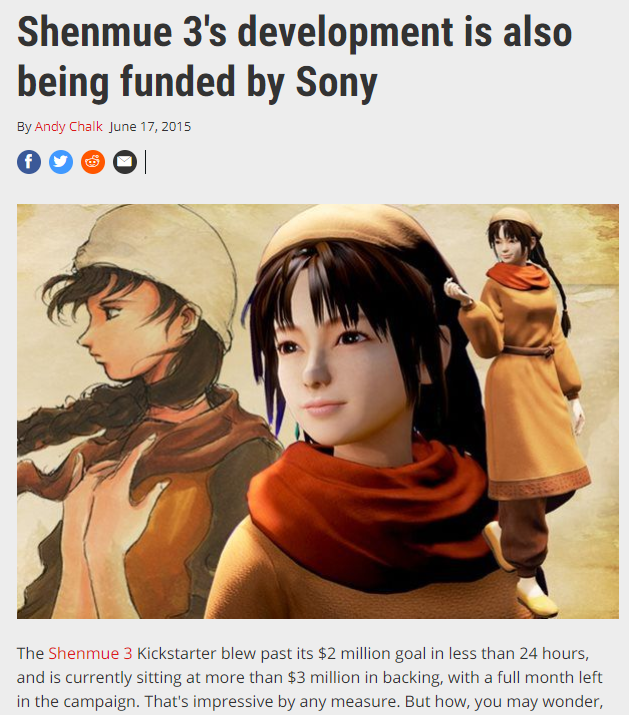 It took about a week before things got clarified by Yu Suzuki who denied the accusations:

Wrong information that permeates even now: 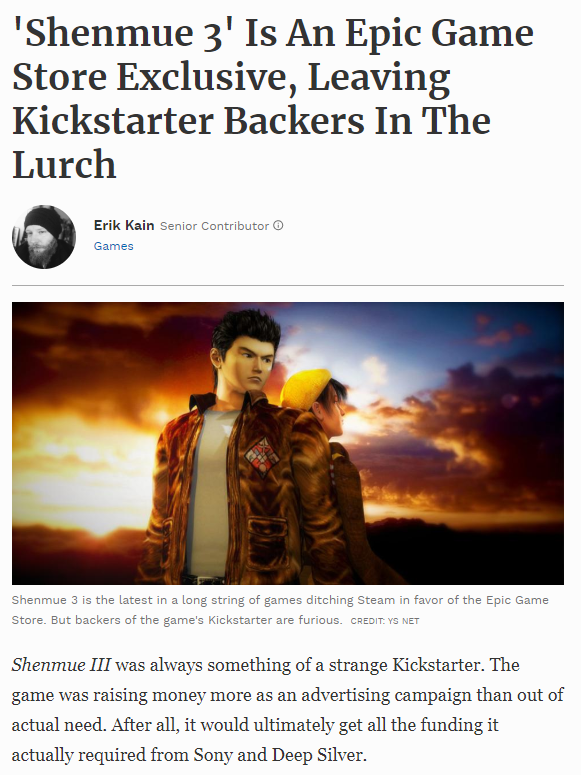 After a little bit of silence the train continued to keep on trucking with the release of the first teaser trailer:

The response was less than stellar and not without reason: 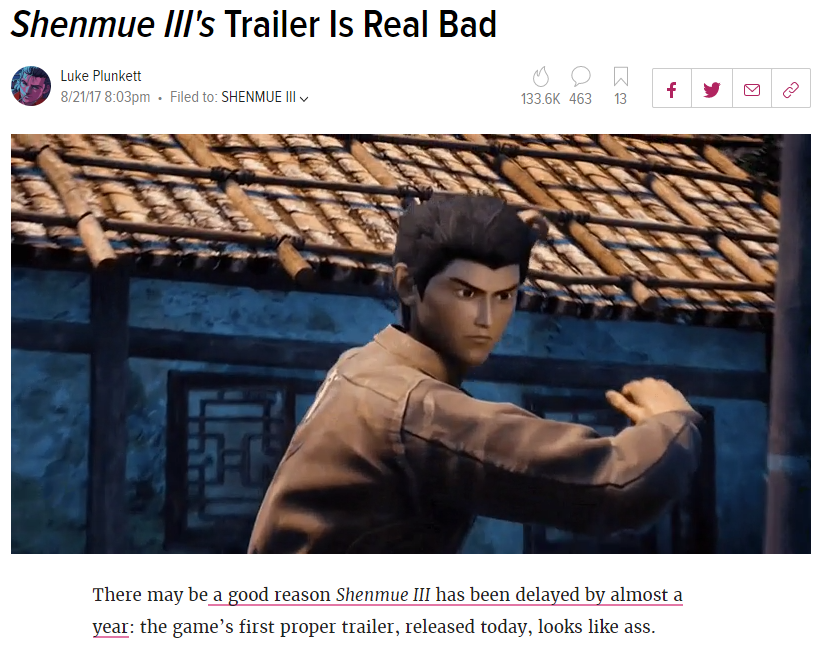 All of that wasn’t really a big deal. Shenmue fans weren’t expecting an AAA game to begin with. They would arguably be fine even with Dreamcast graphics. Also, it’s still a work in progress. So the general sentiment was

As a busy European with E3 with the PC Gaming Show going on at like 7 pm and waning interest in big conferences, you can imagine the shock when I and many others got wind of that particular deal. It came as a surprise, like the surprise of you finding your significant other in bed with another person or your friend stabbing and twisting a dagger in your back while you’re not looking. Many feared that the doomsday news may come to pass. Everybody was still optimistic and most went on

*Anywhere excludes E3 it seems
And right now we have 1 positive (Huber from EZA) and 3 negative (Jeuxvideo, Gamekult both supposedly from Shenmue fans and Giant Bomb as general sentiment barometer) impressions of it. Unfortunately, Fans and Backers got the short end of the deal here because as much as they want to give their own impressions, they can’t because the promise to the pledge wasn’t kept. Because the E3 is more important than a promise to the Fans and Backers. 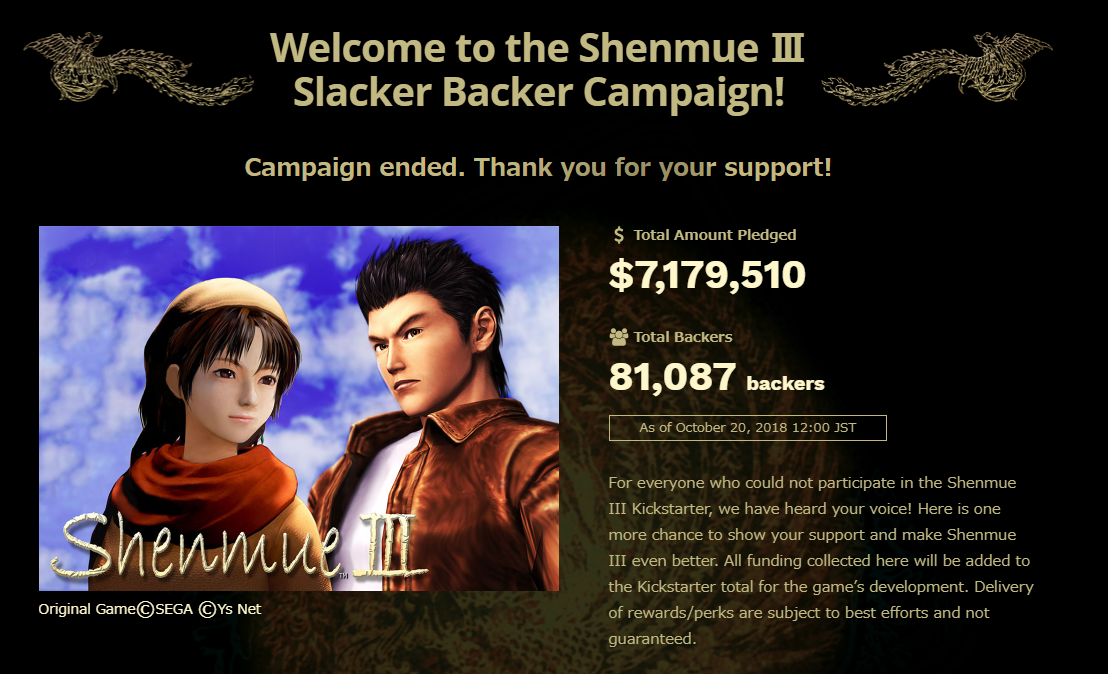 A code in a box for PC and refunds denied
At the PC Games Show, Shenmue 3 was announced as Epic Game Store exclusive. Now, while the Kickstarter doesn’t say anything about Steam directly, they did mention it in their surveys on where backers decide which version they want. Not to mention that rumors are that it was planned as permanent exclusive until people told them they were not happy with this decision (mildly said). After the expected (or unexpected) outrage, people are starting to ask for refunds as this isn’t what they agreed on. The current answer to them? No dice. This isn’t the end of the ordeal though because this also affects the physical PC edition. Prior it was promised that everything is on the disc and playable from the get-go according to resetera user and backer Sixfortyfive. This is no longer the case. Backers of the PC version will have to deal with a code in a box.

That’s not all that the backers have to deal with…

DLC from nowhere
Yeah, there was no word on that Kickstarter about DLC and from what it looks like, ALL Backers only get the game itself without the season pass. It doesn’t matter if you have paid 100+ or 10k. There has been no word about it so far. Again this was another announcement without any kind of prior notice.

Shenmue III Deluxe Edition preorder is up on US PSN, $74.99. Includes a DLC pass https://t.co/guGe8nN7gZ pic.twitter.com/D1vyTUGNa6

So where does this leave us? PS4 backers won’t be affected much by it, but it’s very clear that they did not care about the interest of the backers at some point, the very same Backers that practically ran the marketing of its Kickstarter by using word of mouth. Others chimed in to show support for the passionate Fans. Making it one of the biggest gaming related Kickstarters ever. Too bad, they never saw the need to return the good faith in them.

With all these backhanded announcements, some are already done with this game even before the release. Some are even going as far as selling their Kickstarter copies at low value to prevent another direct sale of it. On a personal note, when I backed Shenmue 3 in 2015 I had zero interest in any news they had given out. It was just a kind of blind faith that said:

Mediocre trailers, getting in bed with a publisher, Sony supporting them, nothing of that really fazed me. What did was this year’s E3 in a big way.
While I’m not going as far as the others of selling my copy, I no longer have any faith in Ys Net, Yu Suzuki or Kickstarter for that matter. Congratulations Yu Suzuki and Ys Net, you played us good. I hope it was worth it for them because they are landing right there with the other greats such as Peter Molyneux and Keiji Inafune who nobody should put an ounce of trust or money in and will also be starting to warn others to not fall for the rotten promises.

To be clear, they did state that we should wait for after E3 until they are back at their office. After all this, who in their right mind expects anything except disappointment?

EDIT/Author’s Comment 2019/06/18: The Backer “Bob Ross” left a comment with a comprehensive list of open questions regarding the whole ordeal showing there’s even more than mentioned in the Article. As it’s not possible to give a direct link to the comment itself here’s the next best thing which is the page of the Backer Update #103 which is cited many times.