REVIEW: The Liar Princess and the Blind Prince – Switch

Let me just hold your hand while I can.

In a faraway land, there’s a kingdom surrounded by a dark forest inhabited by beasts. Those residing within the kingdom rarely ventured inside as the forest is dark even during the day and the beasts living within have a taste for human flesh. Every night, a wolf with a beautiful voice would sit on a cliff and sing towards the moon. Despite how frightening the forest looked, the Wolf’s beautiful voice managed to convince the kingdom’s Prince to venture within and quietly listen. Not knowing the singer’s real identity, the Prince applauded the Wolf, who decided to go against her instinct and let him live. After all, she found herself liking the praise and soon enough began singing for the Prince every night. Though, the fear of the Prince finding out that she was a beast always lingered. 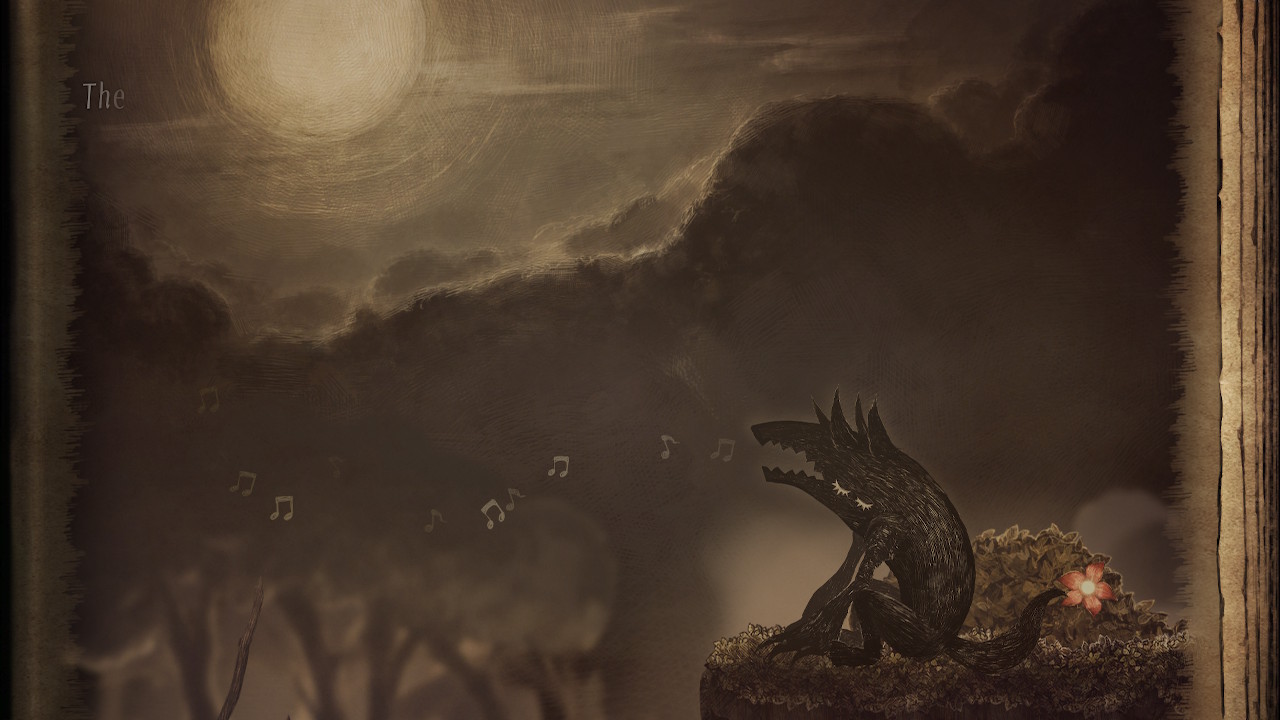 One night the Prince’s curiosity got the better of him and he decided to climb the cliff. Before he was able to get to the top, the Wolf’s song came to a close and due to the lack of applause, noticed the Prince. Panicking, the Wolf quickly moved her paw in an attempt to cover the Prince’s eyes… or that’s what she meant to do. Instead, she accidentally clawed the Prince’s eyes and caused him to topple over the edge.

Filled with guilt, she ventures into the kingdom only to learn that the Prince is now blind and locked up in a castle tower. Not only that, but he’s understandably afraid of her wolf form. Determined to right her wrong, she quickly travels to a witch and trades her singing voice for a human body that looks like a princess. To ensure the Prince’s safety, the Witch also adds the ability to switch between her princess and wolf form as a gift. Finally, the Wolf can free the Prince and hold his hand as she escorts him to the Witch. 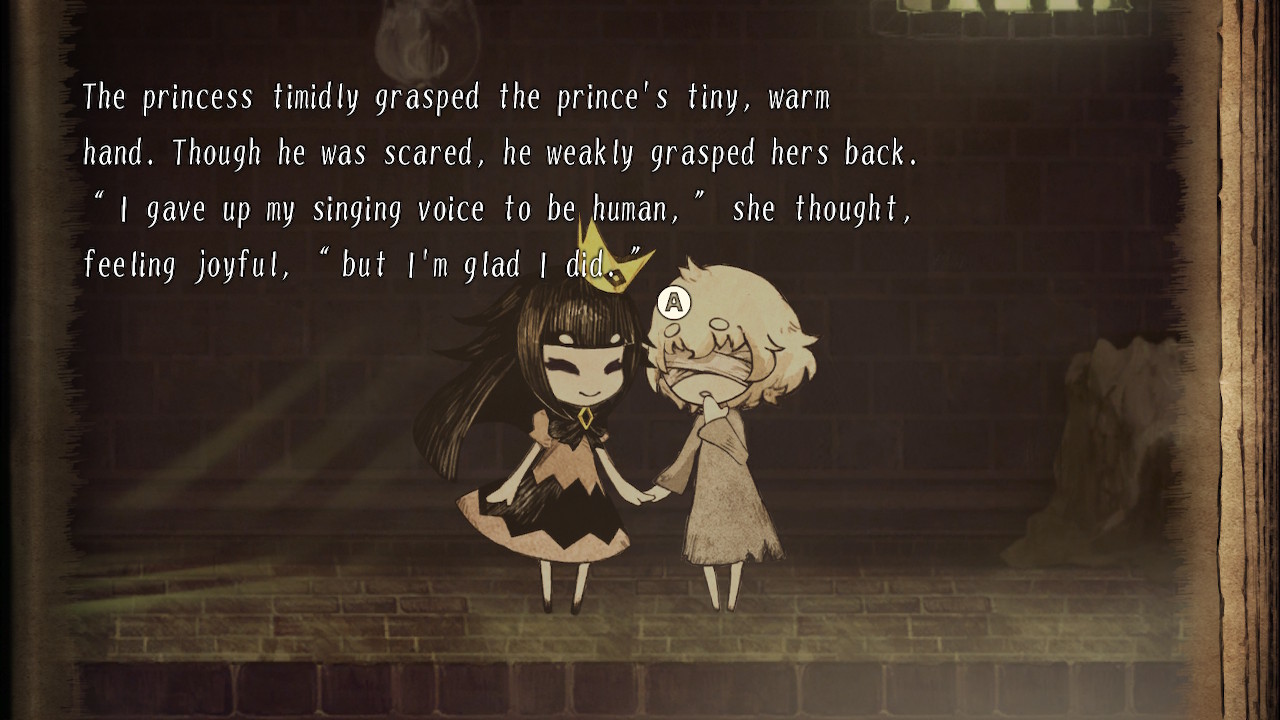 You play the very Wolf, turned Princess, in this fairy tale. If you want to safely bring the Prince to the Witch’s home you must swap between your two forms where the situation fits. In her princess form, you’re weak. The various beasts in your path will start to target you and you can die from high heights, but you’ll be able to hold the Prince’s hand to guide him and use switches. Switching to her wolf form will allow you to kill those pesky beasts and be able to jump onto ledges you otherwise wouldn’t be able to. 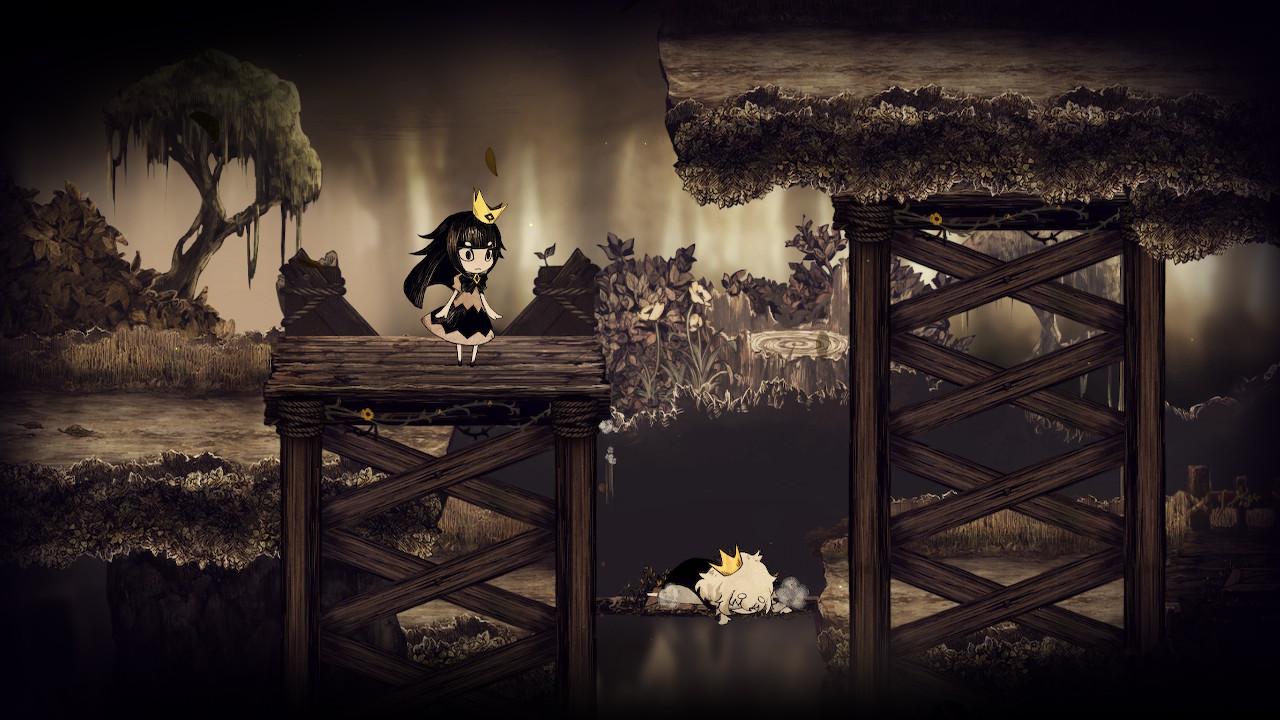 The platforming and puzzles are pretty easy throughout, but it does get harder at chapter (or area) three. Most of it is just trying to keep the Prince from harm. Making sure to kill the beasts before they kill him and keep him from falling. Though, he’ll probably die by tragically not making it to the ledge more than accidentally falling off during a puzzle. The puzzles here often lean towards separating you two as two switches need to be pressed at the same time to continue. This brings up the mechanic of telling the Prince to walk in a certain direction and picking up certain objects. Though, there is a section that has you solving some riddles. Just remember that they’re simpler than you think they are. If you can’t get past a section and just want to continue the story, you can choose to skip the stage. 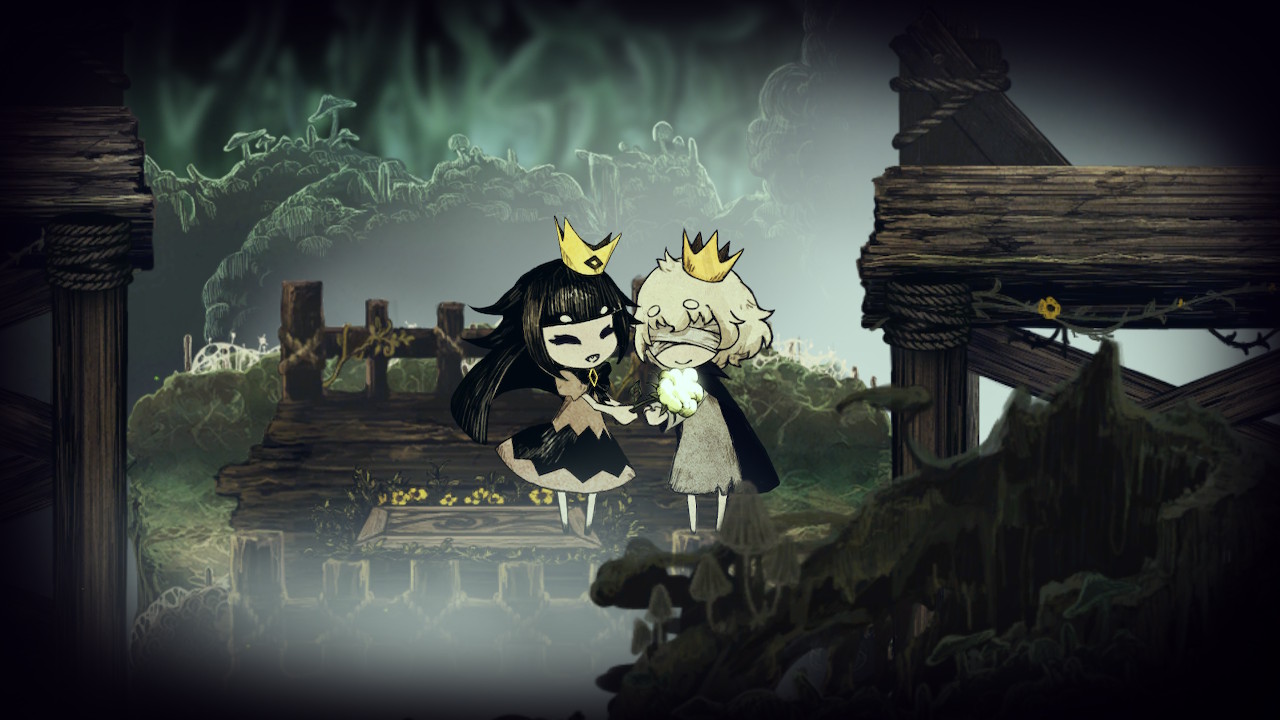 There are two different kinds of collectibles you’ll come across as you travel through the forest. The most abundant are petals that are generally floating in your path or perhaps hidden in the shadows. Collecting these lets you unlock some artwork (under “Collection” on the pause menu). The other collectible becomes available once hearing that the Prince likes flowers. Every so often, at least once per chapter, you’ll come across a flower bed, You can take a flower from it to give to the Prince, but you won’t be able to transform into a wolf so be careful. This not only makes him happy but also gives you some backstory on the Witch (under “Album”) as each petal acts like a page. If you want to see what you’re missing, or perhaps if there’s a flower in that level, going to the stage select screen will show if you collected all the petals and/or flowers. Rest assured, you don’t have to replay the whole stage (well unless it happened to be at the end) if you’re missing some. The game remembers how many petals you have so you can easily switch stages right after without losing it.

If you want more challenge, there are some achievements that can give you just that. Challenging you to complete certain stages in a certain amount of time or finishing a certain stage without killing anything, which is way harder than it sounds.

The art style really reminded me a lot of A Rose in Twilight, which was part of the reason I was interested. I absolutely love this art style and it really works well with the games it’s featured in. After all, you can’t have a game being framed as a fairy tale without having an art style that beautifully reflects that. 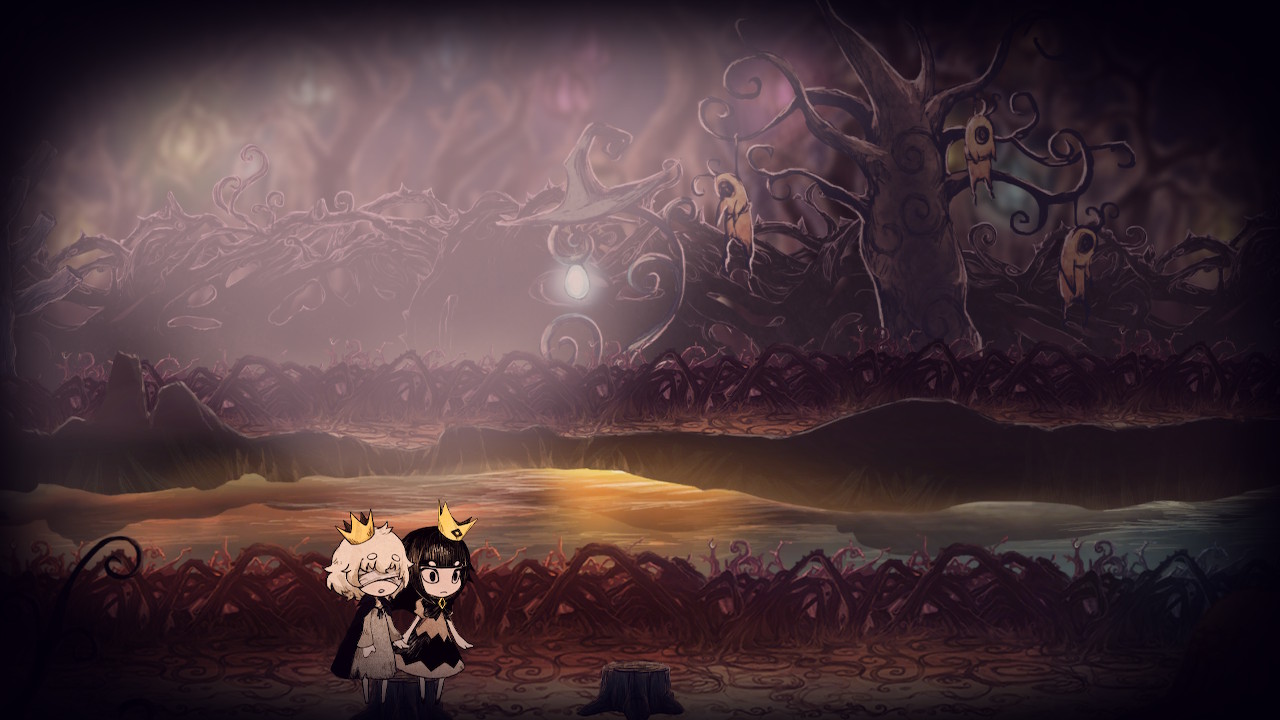 The narration wraps it all together as it further cements the idea that this is truly a fairy tale being read out to someone. Having a very soothing and soft-spoken voice actress throughout that immediately makes me think of this being read out as a bedtime story. My one complaint here is that the music often overpowered the narration. Granted it’s narrated in Japanese and the music is pretty good anyway, but I still liked listening to her voice.

The Liar Princess and the Blind Prince is just so adorable as you play as a Wolf who wants to hold a Prince’s hand to get his sight back. Managing to have a light-hearted story and at the same time still conveying the underlying stress the Wolf has as she tries to hide her true identity is amazing. Despite how many times the Prince died due to barely missing the ledge or falling just beside a safe mushroom, I absolutely love The Liar Princess and the Blind Prince. If you just want an easy platformer that focuses on the story and doesn’t linger on too long (averaging around 6-7 hours), I highly recommend picking this title up. 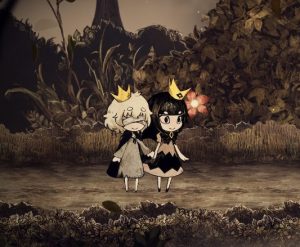