Dragon Quest 11 is the newest game in an old series, and one that proves that it still has a lot to offer.

A Classic Draws Near

It’s been a happy few years for Dragon Quest in the west. Following the release of 9 on the DS, the series went quiet for a while as far as we were concerned, with a ton of entries passing us by without much comment. Whatever caused this though, Square Enix had a change of heart on it; the remake of 7 and the port of 8 both came out here after all, both on the 3DS and both of which I’d recommend. We didn’t get every game we’d missed out on, but fortunately, this change happened in time for us to get 11 without too much delay.

If you’re not familiar with Dragon Quest, it’s a long-running JRPG series – it might be more accurate to call it one of the JRPG series, actually, as the first one predates even its cousin Final Fantasy by a few years. This was before the differences between Western and Japanese RPGs were so strict, so it was inspired by games like Wizardry and Ultima, where you played as a lone knight, out to defeat an evil wizard and save the kingdom. The plots became more complex as the series went on, but that kind of good VS evil story was generally the standard. The same can be said for the gameplay, as while Final Fantasy seeks to reinvent itself every time, Dragon Quest sticks with what works, which may be a good or bad thing depending on who you ask.

However, it seems that with 11 they sought to put their best foot forward with the first entirely new game in a while, and I think the result is a classic. 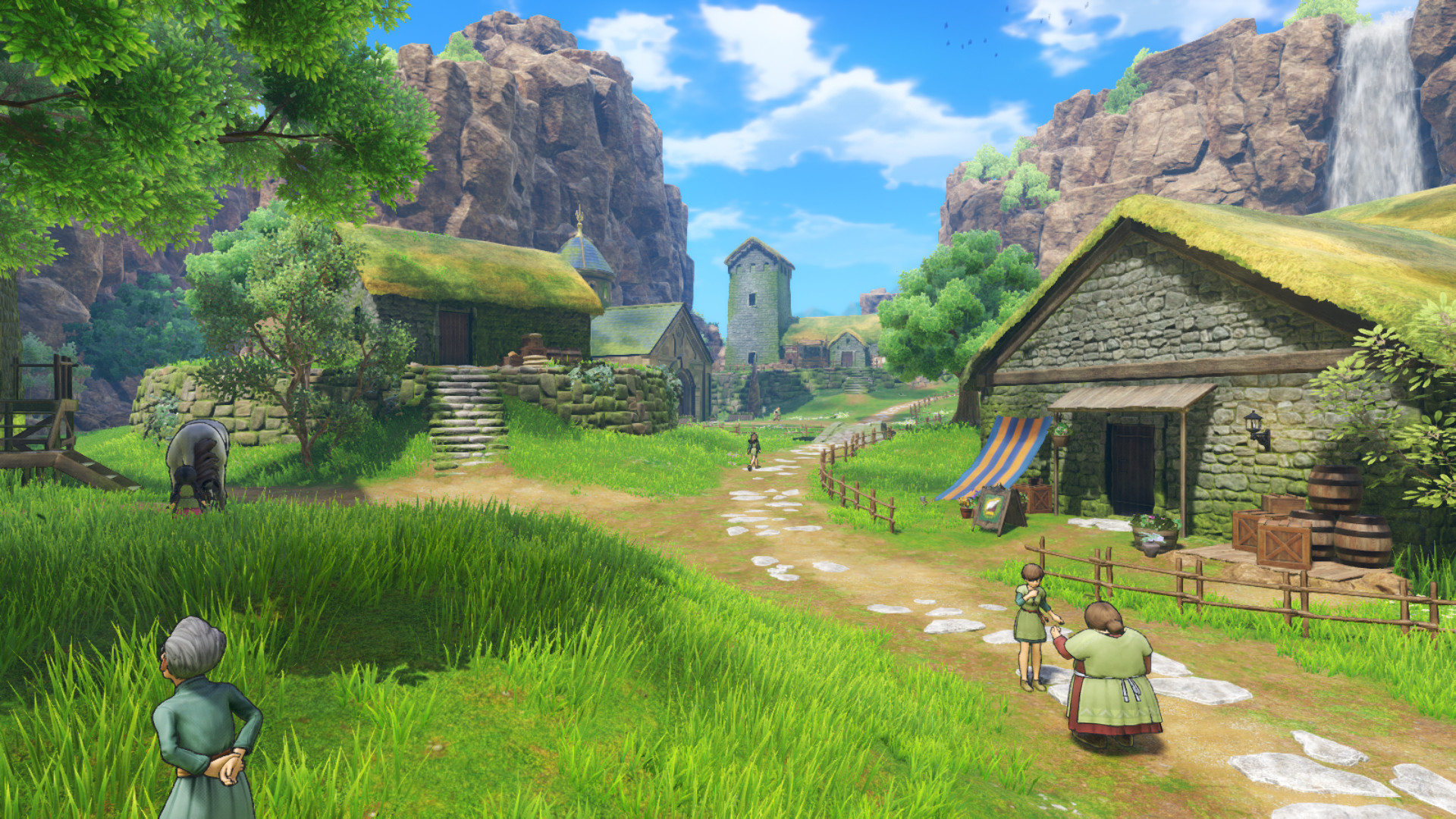 Here There be Dragons, and Quests

Stop me if you’ve heard this one before: a young man living in a small village becomes awakened to his destiny. He is in fact the reincarnation of the Luminary, a legendary hero who is said to defeat the Dark One and save the world. With your new birthright, you ride off to Heliopolis, the largest city in the land, where you meet with the king and explain yourself…

…and then he hurls you into the dungeon, claiming that the Luminary is really a harbinger of destruction and calamity. Thankfully, it is there that you meet your first party member, Erik the Thief, who’s been looking for the Luminary himself. You barely manage to escape, you end up running into a dragon, and then plunge down a waterfall. This is all before the title drops, so the game definitely starts off stronger than some others in the genre, and even some other entries in the series (looking at you, 7).

From there you begin journeying around the land trying to figure out how to fulfill your destiny, and gathering party members who don’t believe what Heliopolis is saying about you: the twin mages Veronica and Serena, the dapper swordsman Sylvando, and the mystery duo of Rab and Jade. They all have good personalities, particularly thanks to the Party Talk option, which allows you to get their thoughts on what you’re doing or where you are through the menu.

Naturally, everywhere you go has some problem for the heroes to solve, and it’s pretty self-contained at first. Every area has a dungeon, a boss, and then you’ll move on to the next. Each kingdom or town is also themed: a Japanese hot spring where everyone speaks in haikus (even in voiced cutscenes), or a sea-side spot with gondolas and heavy Italian accents. It’s a bit silly, but something Dragon Quest has done for a while, and the series has never been totally serious all the time. The voice acting in these areas is suitably hammy, and it’s worth mentioning that the voice acting we got is actually exclusive to the English version, as the Japanese release has none at all. That’s certainly a great deal of effort to appeal to us. 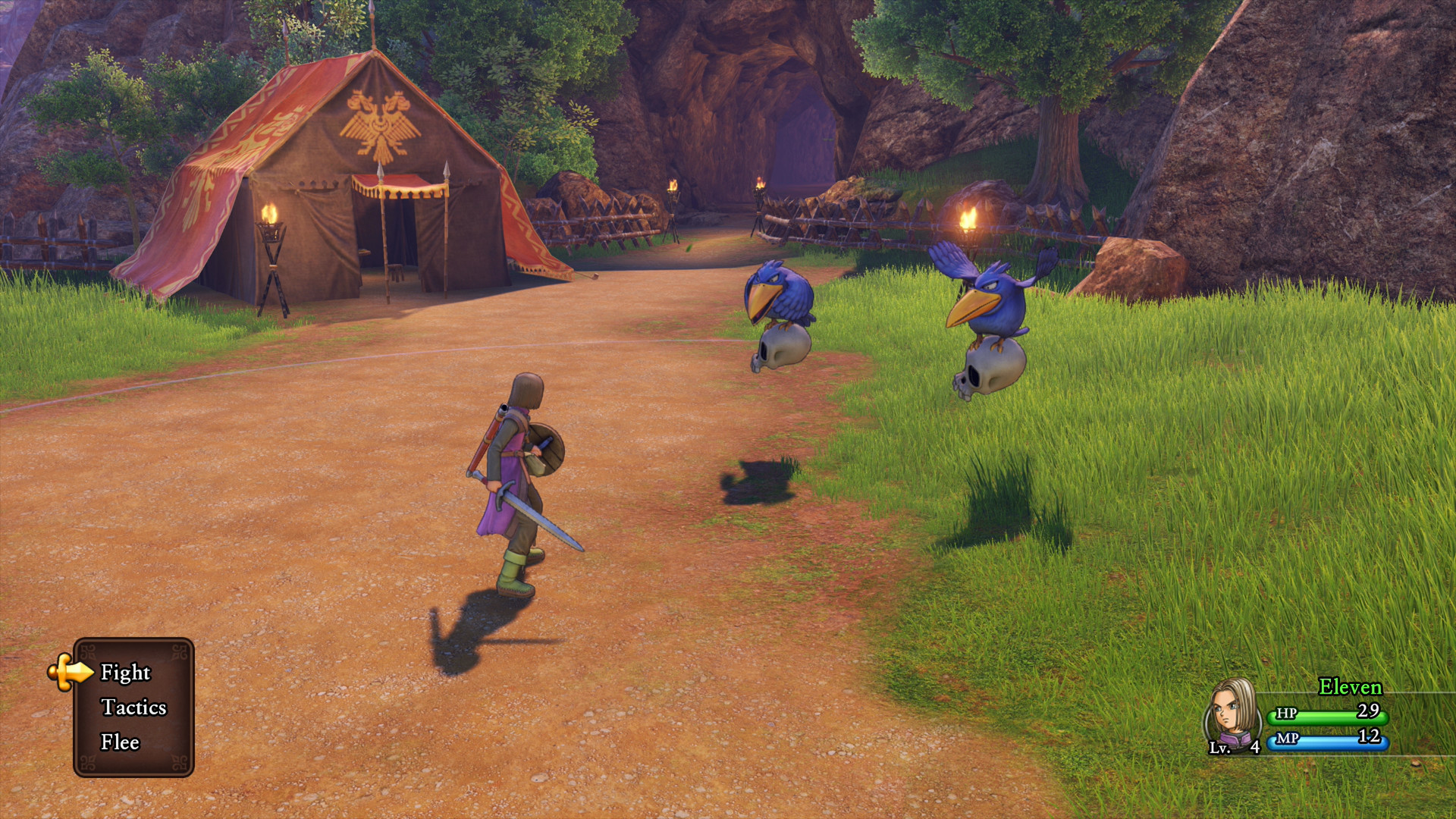 Gameplay though is where 11 definitely shines, with the right mix of old and new mechanics. If you’ve played another Dragon Quest game the battle system is still more or less the same; there’s your party and groups of monsters, and you take turns hitting each other until one side loses. Battles feel quicker than in other games, and there are some new extras like the ‘Pepped Up’ mode, where a character can get supercharged after being in battle long enough, boosting their stats and letting them cooperate with other party members for special moves. But if you’re not a fan of turn-based combat, and more than a few aren’t, then you probably won’t be a fan.

Outside of combat is where a lot of the new stuff is, funnily enough. After every level characters get skill points, which you can spend to acquire attacks or stat boosts on a big hexagonal grid, which reflects a character’s skill in the weapons they can equip or their personal expertise. 8 had something similar to this (8 was a big inspiration for the game in general, really), but there you just put the points into different categories sight unseen, whereas here you can plan ahead what you want all the characters to be able to do, and respec them for a minor cost.

There’s also item crafting, which is simple to do and pretty fun. You acquire recipe books from chests, bookshelves, and quests, and for the most part the ingredients are stuff you’ll find just playing the game. The devil in the details is that you have to play a minigame involving hitting the sweet spot on various bars, to determine how high quality the item is. Screw up and the item is only as good as if you’d bought it in the store (which still saves you money, mind), but do well and it’ll be even better. Your skills at forging will improve as you level up, and every ‘good’ item gives you some of a consumable that lets you try and improve something later on, so it’s never a waste of time. 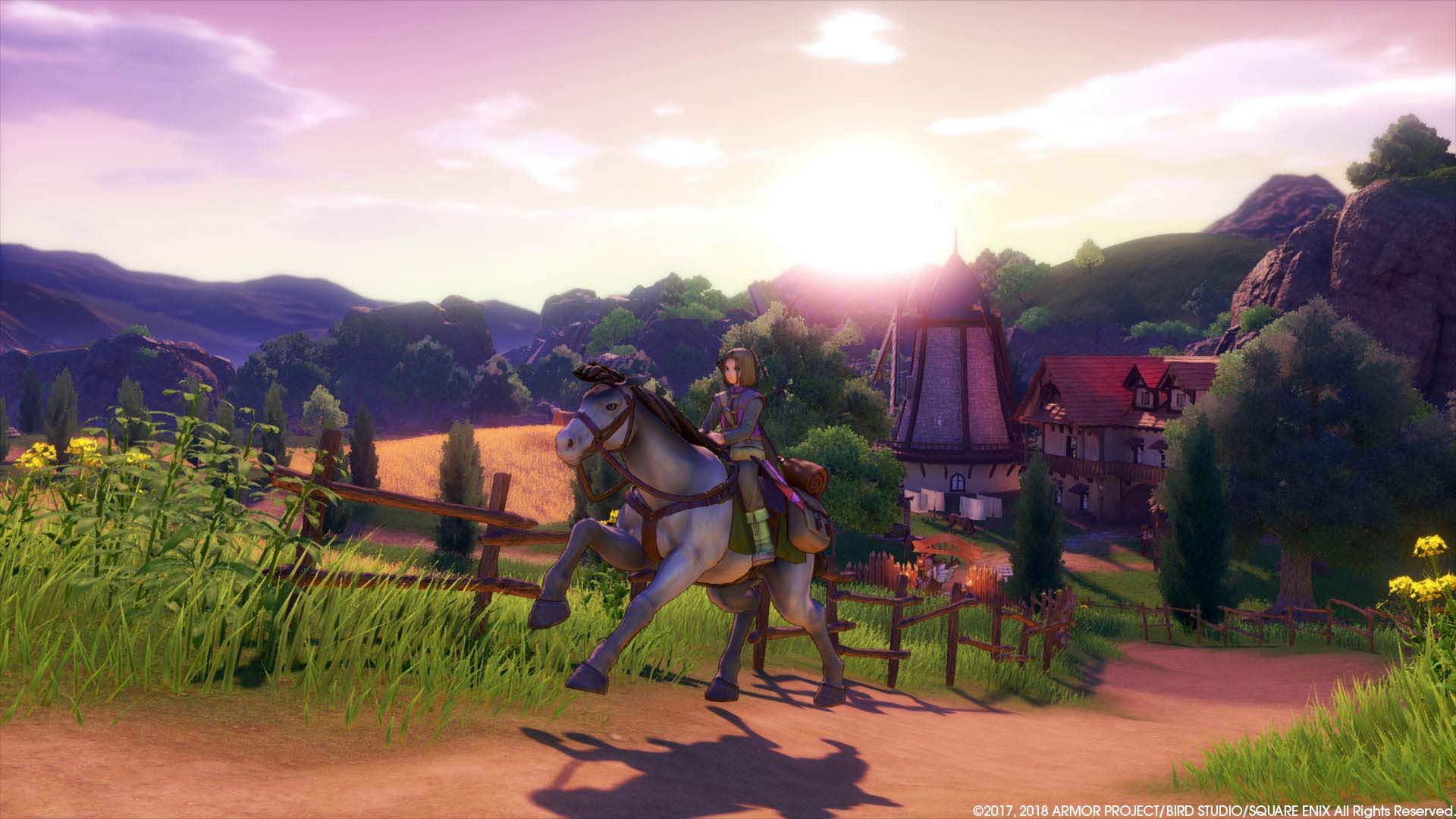 Graphically the game looks lovely. All of the environments are nice, and all of the typical Dragon Quest designs look great in HD. The various monsters, from the iconic slimes to the big bosses, deserve particular praise. How you progress through these environments has also been updated, and it feels like the developers wanted to make just getting around more fun too. In addition to walking around, you can jump, clamber up ledges, tight-rope walk, which makes exploring interesting. You have a horse to make getting around quicker on the overworld, but there are also multiple types of monsters that ride mounts, and after winning the battle you can take them for yourself. These do things like jump really high or fly, thus making dungeons more interesting and just being neat all-around.

One thing that I’d note though for graphics that may or may not be a flaw is that the Dragon Quest character designs are all done by Akira Toriyama, the artist behind Dragon Ball, who kinda infamously only has a few different faces, so that could end up being distracting or a turn-off if you aren’t a fan of his art-style.

Now I am reviewing the PC version of the game, and it’s been pretty good so far. There are multiple graphics options to support lesser computers, and while it’s not perfect, there hasn’t been many crashes or faults, and the game auto-saving means no progress was lost when it did crash. For the series’ first proper step into this market, I’d say that it’s a good job. 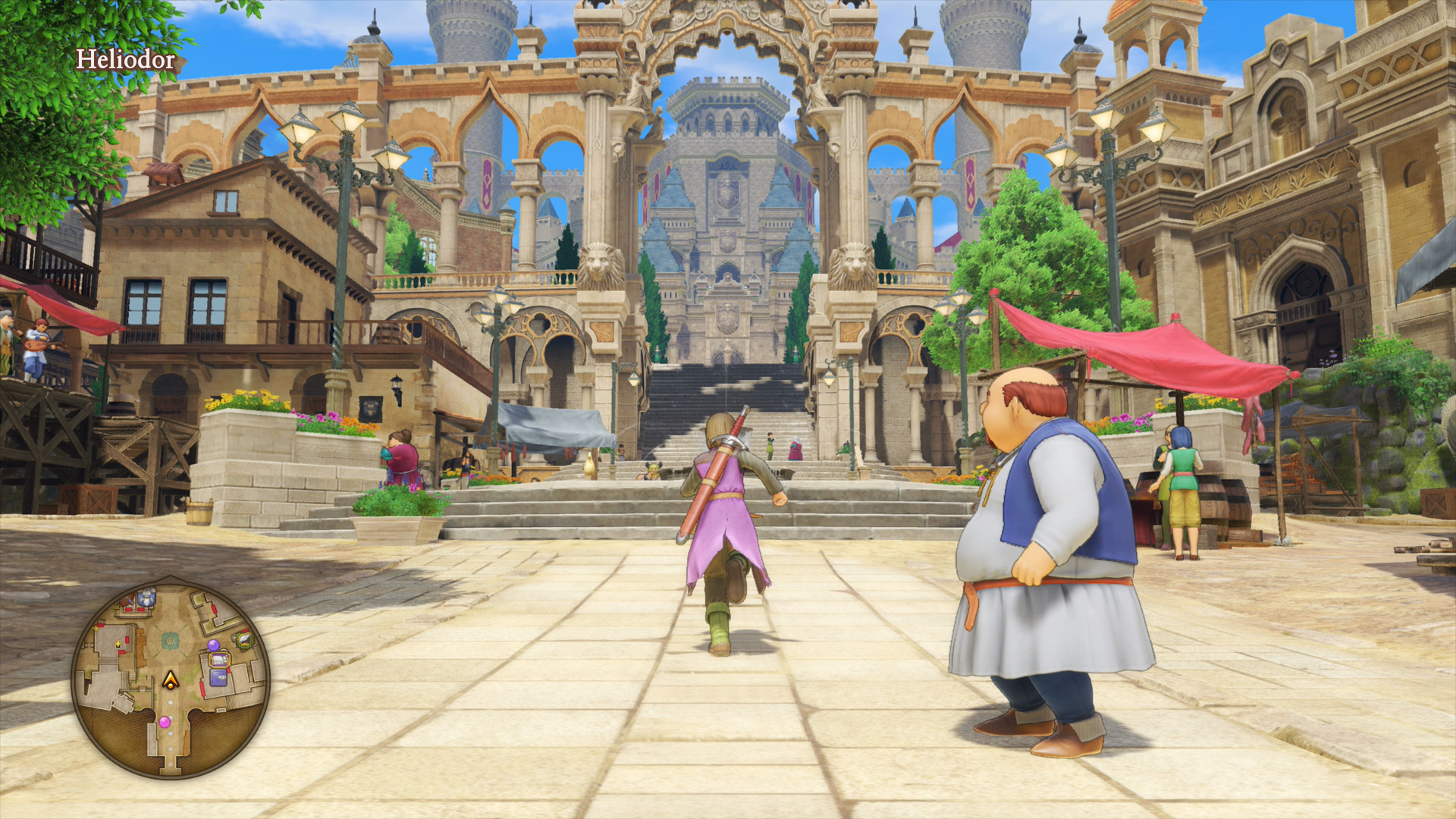 Dragon Quest 11 is a game that’s been a long time coming, especially for us, and one that seems to have had a great amount of thought put into it. Compared to the last major console release of the series we got, there are far more RPGs in the public eye, such as Persona and Shin Megami Tensei, or the Xenoblade series. So it’s important for an older series to show it can still keep up, and I think Dragon Quest has easily done that with this title. I’ve put a lot of time into it, and I think anyone interested in JRPGs who wants to try a new one will as well.