REVIEW: JackQuest: The Tale of The Sword
Add comment
Share:TwitterFacebookRedditPinterestWhatsAppEmail

REVIEW: JackQuest: The Tale of The Sword

Always felt that Metroidvania games are too long and intimidating? JackQuest opts to keep it compact, but is it fun?

We’ve all heard of Light Novels that offer more manageable bite sized content. JackQuest: The Tale of The Sword is like the Metroidvania equivalent to it. The game is a short romp that doesn’t try to overwhelm you with a steady stream of new things to learn. Instead, it’s kept simple, compact and boils down to the essentials.

Story: A damsel in distress, a speaking sword and a quest through a treacherous underground Dungeon 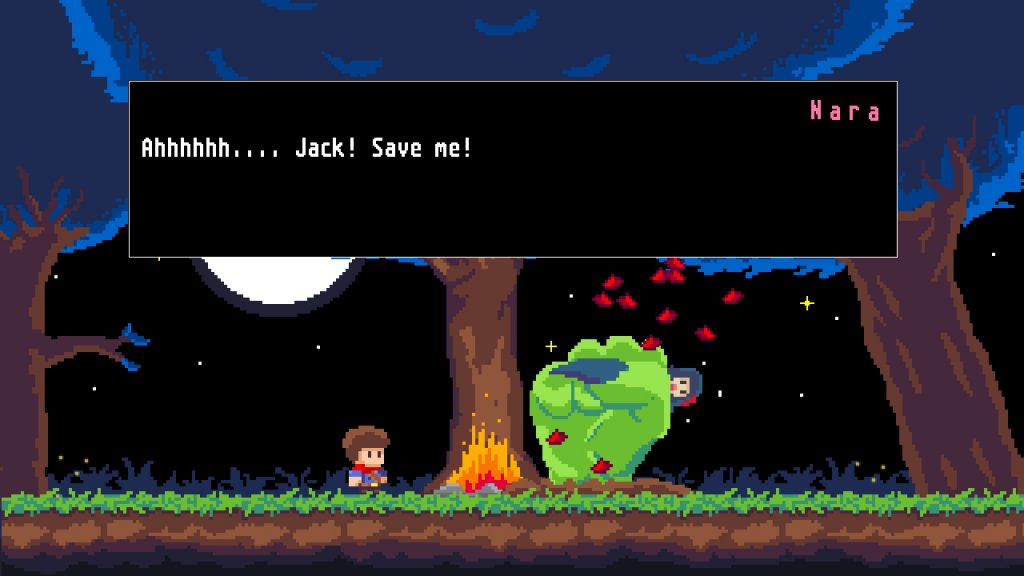 Somewhere, someday an Adventurer named Jack invites his unassuming childhood friend and sweetheart Nara to a cozy campfire BBQ in the Woods. The atmosphere was harmonious and before him lied his biggest challenge: A Love Confession. As he slowly builds up his heroic courage to conquer what is most likely a monumental challenge in his life, she starts to gift him a song. Our Hero Jack knows that it is time to strike while the iron is HOT! Unfortunately, if he did manage to do it the game would be over, so the hands of fate put up one final challenge. Kore, an evil existence sealed for an eternity in a deep underground dungeon, makes his move and literally snatches Nara away with a huge green hand.
Without any equipment and only his guts, Jack follows the hand underground and finds a magical Sword. Sealed within the sword is the previous owner and hero. Thus starts the Quest of Jack and The Tale of The Sword.

Gameplay: A Sword and Bow is all you know

For the uninitiated of the Metroidvania genre is about fighting through a dungeon and unlocking new paths with backtracking until you discover the final boss. It’s not much different than everybody’s favorite Dark Souls in that regard. 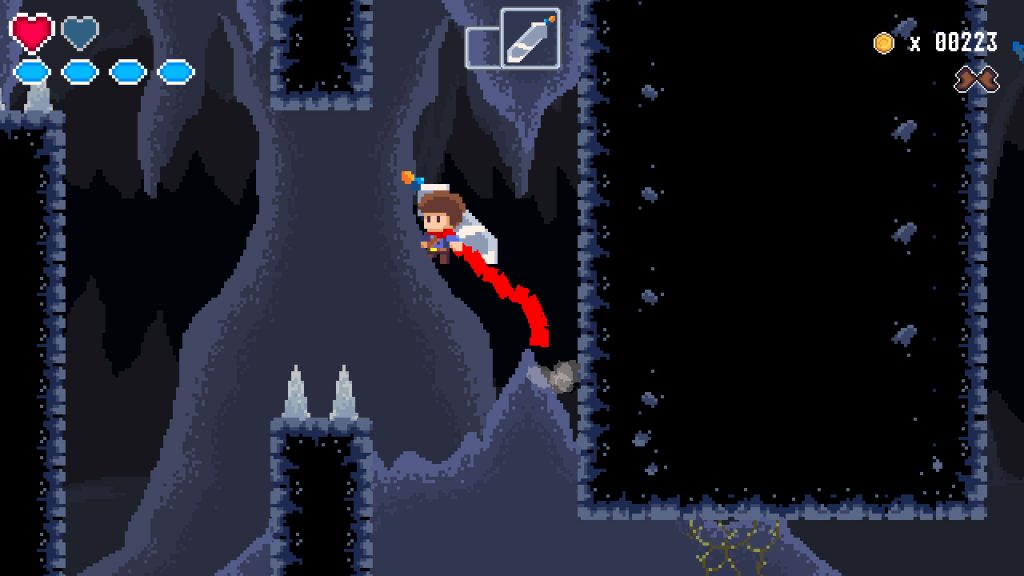 Fitting the theme of a compact game, the amount of content reminds me very much of NES times. The sword is all you have at the beginning of the game and even then, the bow is an optional extra. You won’t get find any huge gameplay-changing items. At top of my head, I can mention the double jump and the ability to breath underwater. Does it even need more? Not really. The content matches the length very well. It doesn’t even feel like an epic adventure. If I had to give it a feeling it would be an “all in a days work” type of feel.

Both the life and special gauges have their upgrades spread across the whole map. The special attacks are rather abundantly available by hitting big blue crystals that more often than not release two recharges. Life, on the other hand, is a rare commodity. You only get them by either buying them from the shop or breaking crates and you can stock up a single life flask worth a half bar in case you have a full life. 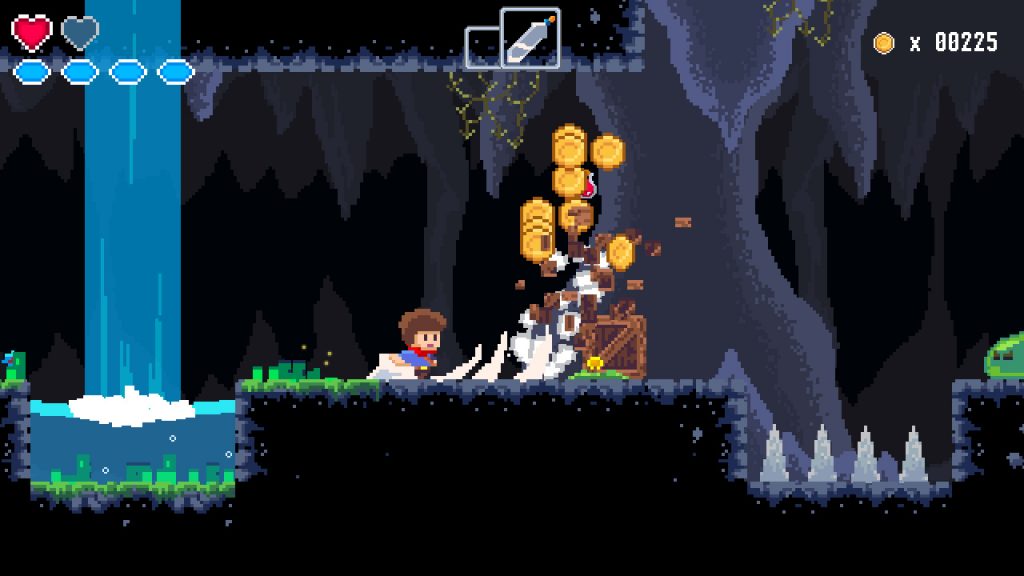 Shopping
Did I mention a Shop? Yes, indeed I did. An item shop is located at various spots and offers everything you will ever wish for… as long as it’s Life, Special Gauge, or a Save Anywhere torch. The latter can be found at fixed locations within the dungeon too. Where do you get the sweet cash? Enemies drop them.

Save Points
By now you will have noticed that I only mentioned the S-Word only once so far. Worry not, there are indeed save points in form of rocks with blue engravings. Be careful though, you will respawn at the same state you saved. If you saved at a hit away from death then you will respawn as such.

The enemies
So we know what Jack can do but what about his opponents? All enemies can take at least two hits outside of bats. They do represent at least a small hindrance, as you can’t slice and dice quickly through them. The enemy variety is sufficient, including buffed up color palette changes with additional attacks. 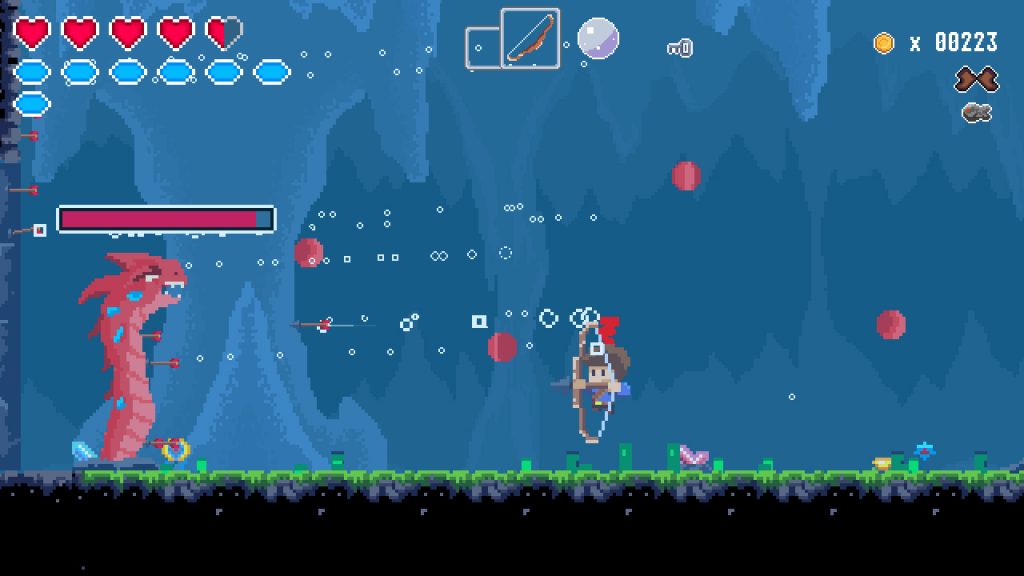 They might seem difficult at first but once you get their pattern down it’s just a war of attrition. Don’t get too complacent. Maybe they got an ace up their sleeve. Their description might sound easy but I did indeed at least die a few times until I managed to optimize my strategy.

Summary
Jack moves with momentum, which takes a little bit of time to get used to. The level design feels varied enough to not get bored and the game’s length is just right to not wear out it’s welcome. There are also some hidden pathways here and there, so a little bit of exploration is also encouraged.

The only thing I might nitpick is that I did get stuck once on my playthrough. I spent over an hour without luck until I decided to just restart it from the very beginning. After that, I managed to find the required hidden pathway to unlock a segment of the map, which I missed the first time around. The time cost wasn’t anything dramatic because I was already in the groove and could blaze through all the familiar places. It would be a lie to say I finished the game within under an hour. Before I did the restart I’ve surely already spent a few hours exploring the dungeon.

While there isn’t anything extra after finishing the game. You can always either try to find all the hidden items or try for some house rule runs. I’m sure it’s a good candidate for a quick Speedrun, since I didn’t notice anything random.

Control tutorials: Bugs or mistake?
I’m not sure if it was me since I’m not using an official 360 controller. The buttons the game showed to me in the tutorial were not all correct. Maybe somebody forgot to adjust the descriptions?

The graphics are made with pixel art sprites reminiscent of NES-era style but with better detail levels. There’s frankly not much to talk about. What you see is what you get.

The music consists of mainly a single song that accompanies you through the whole game. I found it good and kind of melancholic but it can get a little bit monotone. The only times you have different music would be the opening, boss fights, or the ending. The latter three are rather unremarkable but nothing offensive either.

For what it’s worth, JackQuest: The Tale of The Sword is a solid and short entry point for people who would like to dabble into the Metroidvania genre at a budget price for some short romp fun. I enjoyed my time with the game despite the single throwback. There’s also nothing that stands out as egregiously bad when looking at the whole picture. Considering the $10 price and the quality of the game, I feel a just-barely-made-the-cut Save is a nice spot for it.