Remember the auto-scroller levels in Rayman? Here is a game that consists entirely of these.

Escape Doodland is an auto-scroller platformer, and more precisely an auto-runner: your character and the screen move automatically, players have to time their jumps and actions to survive a fast-paced dangerous environment. While the procedurally generated endless runners are legion on mobile, those with hand-crafted, finite levels are actually quite rare. Furthermore, hand-crafting extends to the entirety of Escape Doodland, with hand-drawn graphics that look like sketches on a notebook… doodles. Let’s see if we can make our great escape!

Controls are pretty straightforward, there is a button for jumping, and the D-pad/joystick is used for farting action. Yeah, you read that well. Left is to repel the big dragon coming to eat you from the left side of the screen, up is to fart under you and (logically) jump higher, right is to fart behind you and (logically) dash forward. The underlying logic is easy to grasp and to remember, props to the game for this intuitive layout with inputs that are corresponding to relevant directions. However, don’t hope to fart the whole way through: farting requires rare matchboxes found in the levels, so basic jumps remain the one most important skill to master. 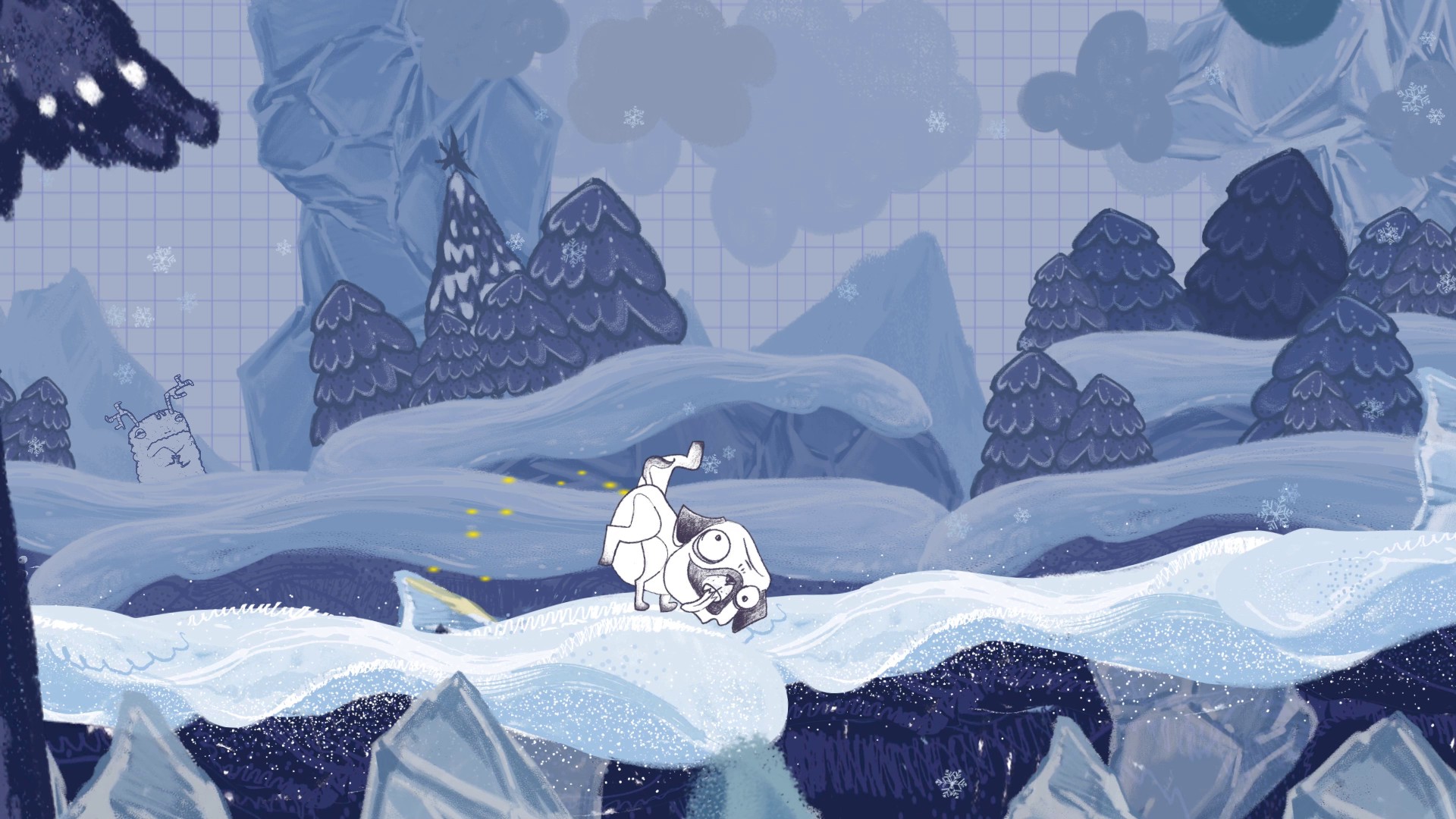 It gets harder than Rayman

When entering a level, the difficulty settings set the tone: hard or harder. Despite the cute (gross) graphics, this is not a game for everyone. Each level has approximatively three checkpoints, and the player starts with three lives. For example, if you lose three lives on the last checkpoint, you have to start over the whole level. While this seems fair, some levels have exceedingly difficult sections that require to learn them by heart, which is made way too difficult by having to restart the whole level. 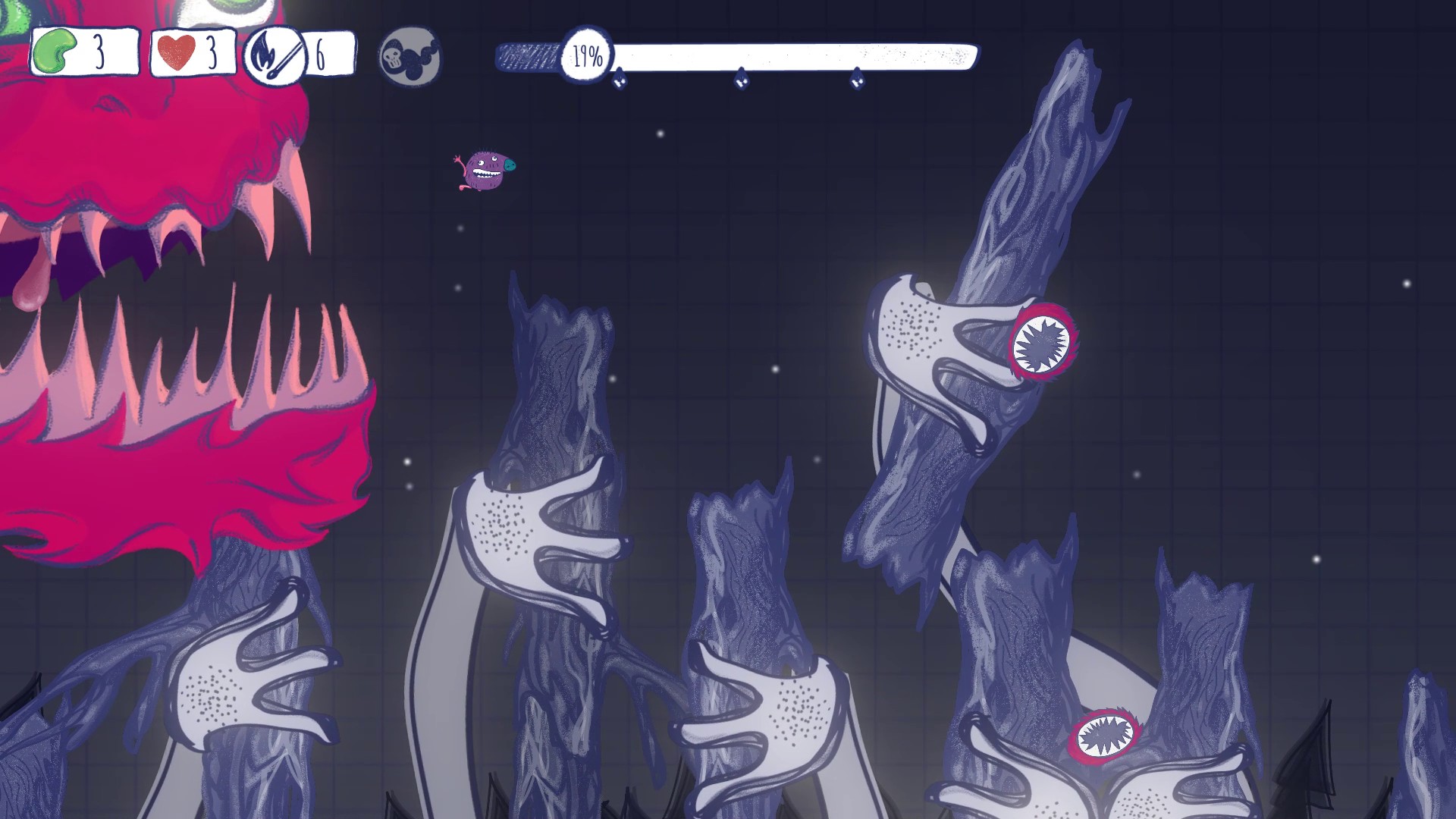 Of course, by restarting you become better at the earlier parts, but then you only have a few chances to learn the new area, and it makes you lose your flow, your rhythm. This is another issue that I had with this game: the music is not remarkable and it is not synchronized to the action. One of the main reasons why these levels worked well in Rayman Legends was because you could time your actions to the music in order to learn the beats of the level, and there is nothing like that in Escape Doodland. Something else that worked well for Rayman Legends is that these levels were rare, most often the final level of a world to complete: there are normal levels to relieve the tension, and these challenges represent the culmination of a player’s efforts before leaving a world behind. Finally, Rayman is very precise and yet it adds a little bit of leeway with helicopter hair to correct a trajectory, while Escape Doodland has weird hitboxes that make it sometimes approximate to predict whether something will work or not. At least there is a nice mantling/wall-jumping feature for the moments when you were a little bit too short, but still managed to touch the side of the next platform. 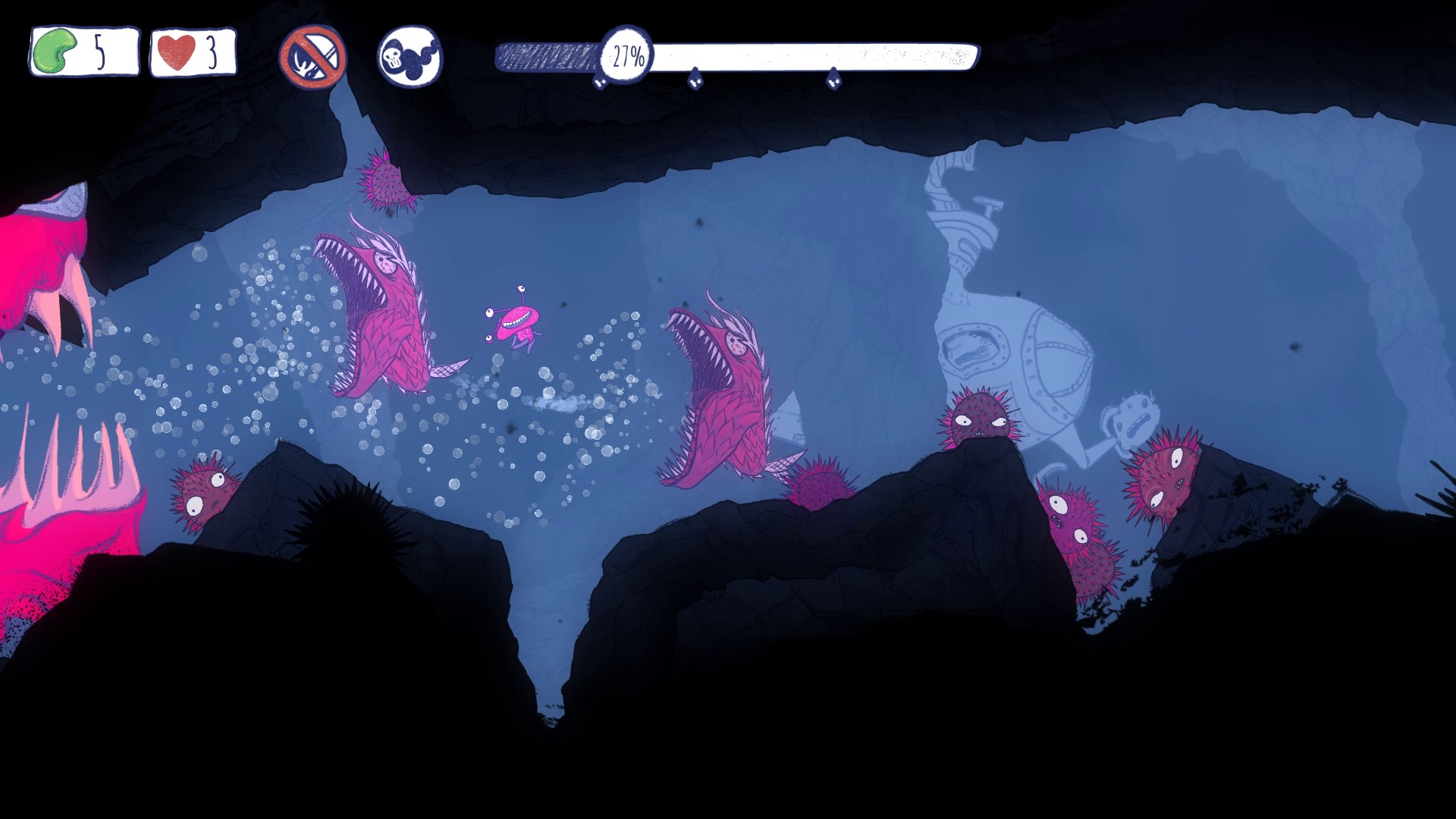 There is a shop to buy stuff with beans collected in the levels, such as different characters (same gameplay), improvements to the farts or extra lives/matches, but there is nothing to buy a “normal” difficulty with infinite lives from a checkpoint. In case someone is thinking: “Git gud” or “This is not the game for you, noob”, I’m actually delighted by masochistic platformers and I have 100% completed many of them. But even though I like to die horrible deaths and get better at a game, I did not feel like the difficulty was fair in Escape Doodland, nor that moving around was pleasant. It’s not about getting better at controlling the main character, that part is easy: no, it’s about learning the levels. I recently enjoyed Rage in Peace which features insane traps that cannot be predicted, such as spikes coming out of the ground right where you were supposed to land—it’s much more insane than Escape Doodland, but the sections to learn are short and easy to execute. In Escape Doodland, there were a couple levels that were good with intuitive paths as I ran in panic, but then I eventually gave up in an underwater level with the dragon coming from the left at the same time as carnivorous fish coming at me at the speed of a bullet from the right, and electric fish with a huge circle of denial around them. I was getting closer and closer to finishing that level when I realized that I simply wasn’t having enough fun, which is a shame because the graphics had so far been the main reason why I pushed through. Well, now I’m stuck in Doodland: I didn’t manage to escape. Please send me some ink so that I can try to draw a hot air balloon! 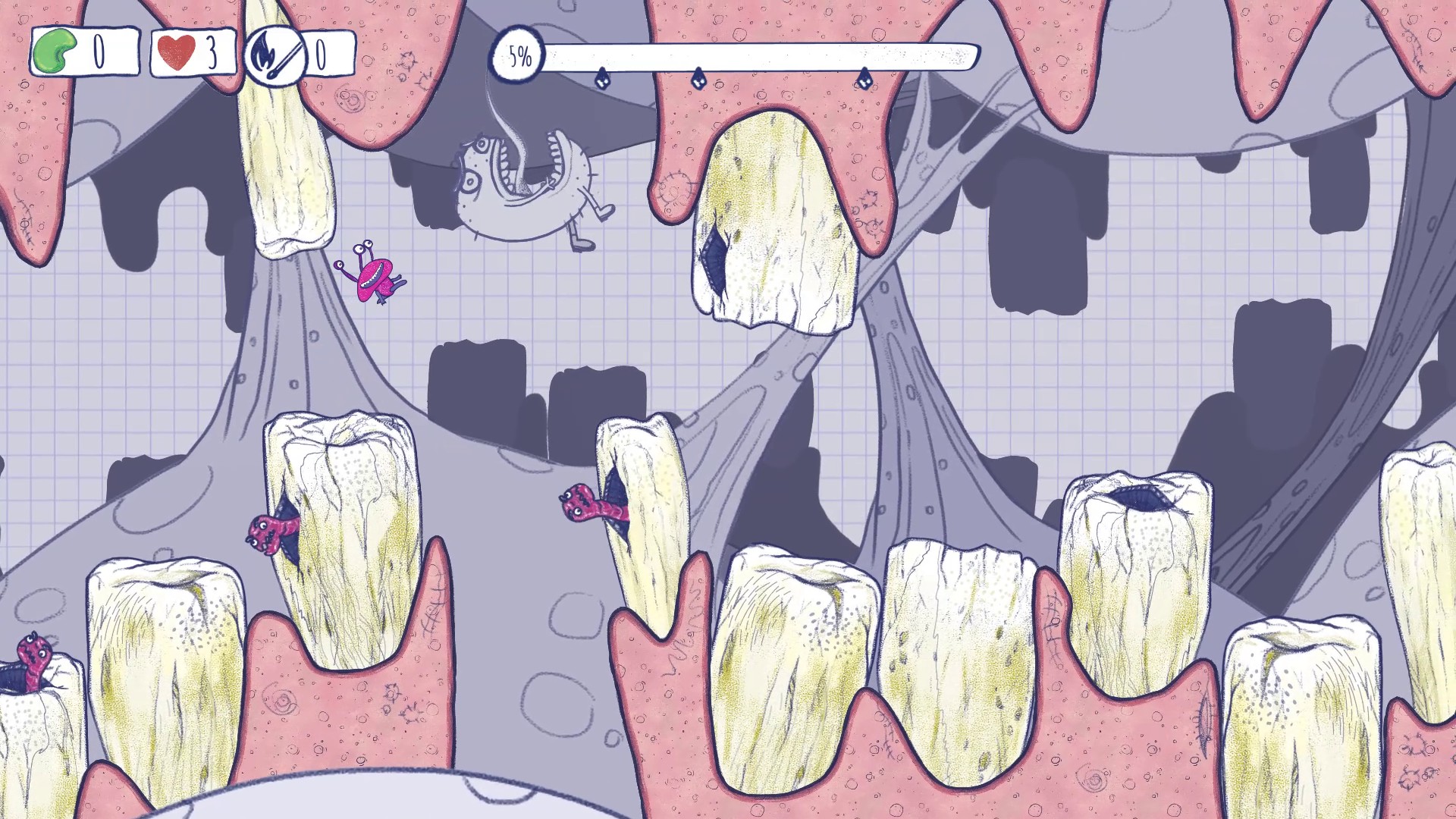 The world of Escape Doodland is grotesque and bizarre, and you will find yourself avoiding a wall of slime and body parts while jumping over teeth populated with worms. It’s weird, it’s funny, and the way some levels start with an environment and morph into something else entirely is engrossing. The pursuing dragon even looks different in each level! This is not a very lengthy game (couple hours), but I must say that I appreciated that it did not stick to its basic jumping mechanisms and sometimes added variety in the form of underwater or flying areas. 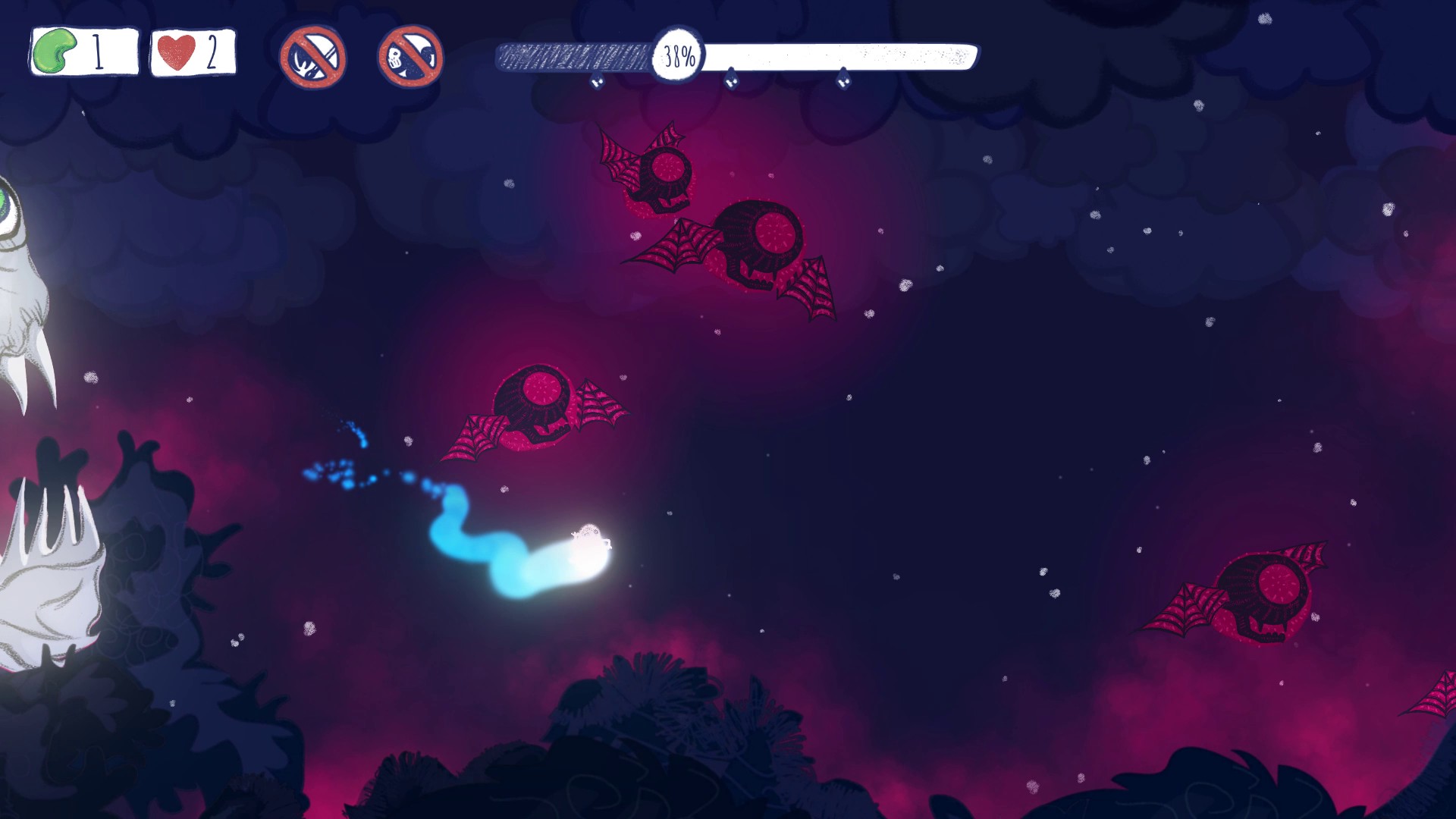 Escape Doodland can be too difficult without earning the glorious fun that would normally make these games work. At least the bizarre graphics are very unique and give enough incentive to progress through the levels, if the auto-running, limited lives, and precise jumps despite crude hitboxes don’t deplete your patience first.