A young girl digging in a garbage heap tries on a pair of found VR goggles and is imprisoned in a puzzle game reminiscent of Marble Madness.

Intro – “The future is coming.”

Arca’s Path appears to be a interesting departure from both the art styles and locomotion seen in many other VR games; Unique and intriguing is the unfolding & growing animations of the world around you as you progress.

The visual style is reminiscent of Tearaway for the Vita & PS4, coupled with the 2.5D comic panels used to narrate the story. This approach could make a beautiful game.

The mechanics are simple and the control scheme uses a gaze to go style of gameplay allowing a hands-free experience. Sounds like it has a lot of promise, if the puzzles have a decent amount of challenge and the music is complimentary to the gameplay we might have a great title to invest our valuable time in.

For now, stow your impressions and wishes and lets see what unfolds, what Arca’s Path has to offer…

Story – “VR is about being freed from the limitations of actual reality.”

The story is told through beautifully illustrated motion comic panels that make use of VR’s depth and subtle movement to really give the flat images a film like attribute. Vibrant colors and great use of both post-apocalyptic imagery and cheerful and endearing characters, the contrast makes for a great aesthetic.

As for the story its self, it conveys a simple reason/motive for the main character, establishes supporting characters with questionable motives and uses an interesting visual appeal to keep you wanting more.

The basic premise, without spoiling the plot, is that there is a young female who finds a set of discarded VR goggles in a giant trash heap. Upon finding and donning them, she is whisked away to a VR world of her own, where she is de-materialized into a ball of sorts, and placed in a world that unfolds quite literally while you progress. As you defeat the levels, the game adds depth and new environments to explore in the virtual space. The general over-all style remains consistent, however, each level design is augmented with a theme that affects the type of objects that unfold and the choice of colors to really highlight the feel. 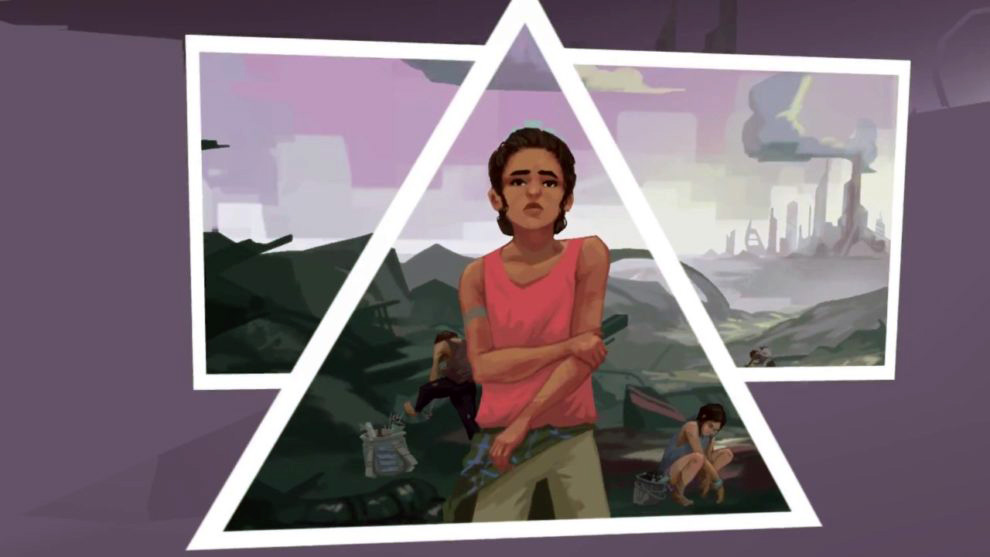 The X factor in Arca’s Path is really the design choice, the gameplay is nothing drastically new, it really boils down to the way the story is told and how things progress.

This section is light for a very important reason. What it gains in visual appeal and interesting story, it looses in originality in terms of gameplay and general mechanics.

Technical issues & Glitches –
“What is virtual reality, but the Spotify of human experience?”

No technical issues were experienced during the review process.

Installation was small and straight forward, no hoops to jump through or framework packages that needed installed. Nor were there any issue loading the game for the first time.

There was little to no setup, and it did not require on any part for me to search out solutions for graphical or control schema issues. 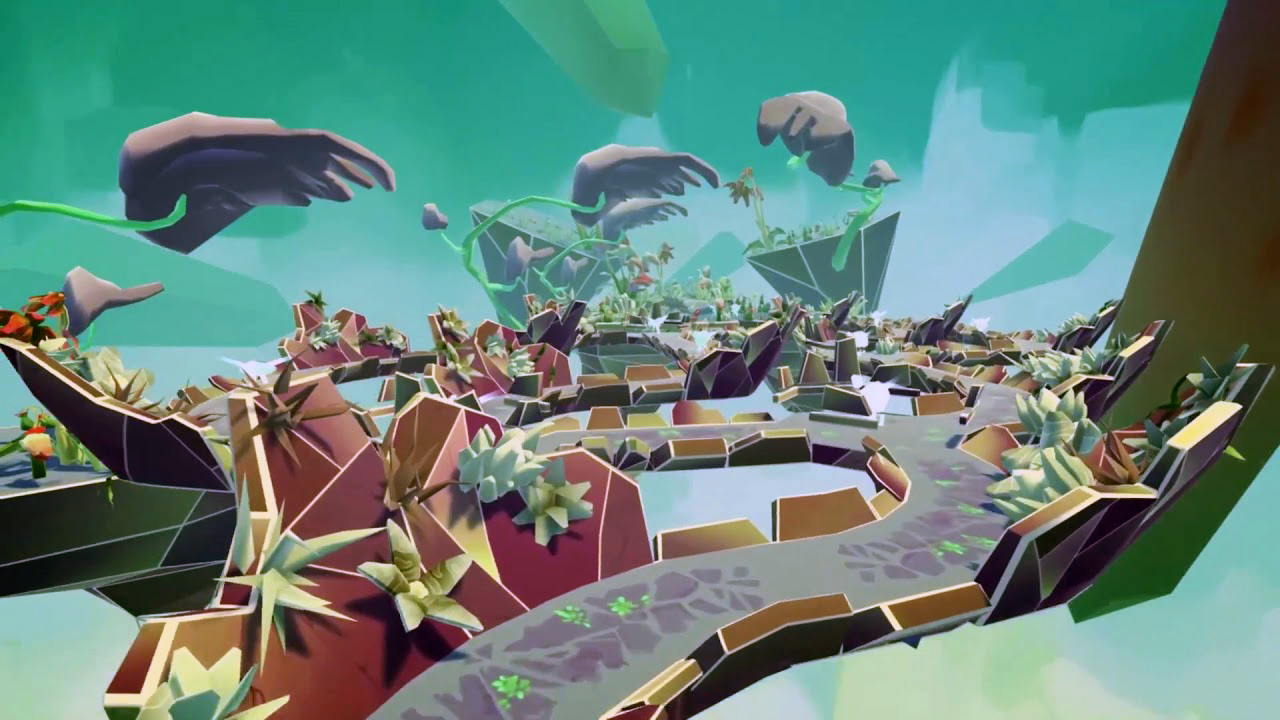 Music & Sound Design –
“Let’s have a VR Christmas party at my virtual place next year.”

UGHHHhh… Music & Audio design is so massively important to me that I was DREADING this section of the review. Arca’s Path has some rather beautiful and unique visuals, but it rolls right off the proverbial cliff with the choices they made in sound design.

The Music:
From the outset. the audio in Arca’s Path was almost jarring. The game gives you the sense it is going for a peaceful and relaxing experience, then it threw an assortment of instruments into a prepubescent trance/goth/new-age kid’s bedroom and told them they can’t come out until they’ve finished the soundtrack.

As the opening cinematic plays, the music is descent and while unremarkable it did not in any way detract from the telling of the story.

However, once you’ve begun to roll through the first few levels that’s when the cacophony of jagged undulating waves of audible torment begins. It legitimately took turning the music off to allow me to finish this review, as the general feel of the game was genuinely ruined for me because of the awful soundtrack. No offense to the teenage composer… I’m sure you were hungry and wanted out of your room.

The Sound FX:
The sounds are there to serve a purpose and not much else, with the exception of the story panels. During the Semi-Comicbook like story telling the sounds do add some life to the characters and environments, despite chosing to not voice-act any of them.

During gameplay you will get the customary dings and clicks and such that you might expect, even a few whooshes… I cannot point out anything that really wowed me or made me smile; disappointing.

Audio, in Arca’s Path, you are the weakest link. Goodbye! 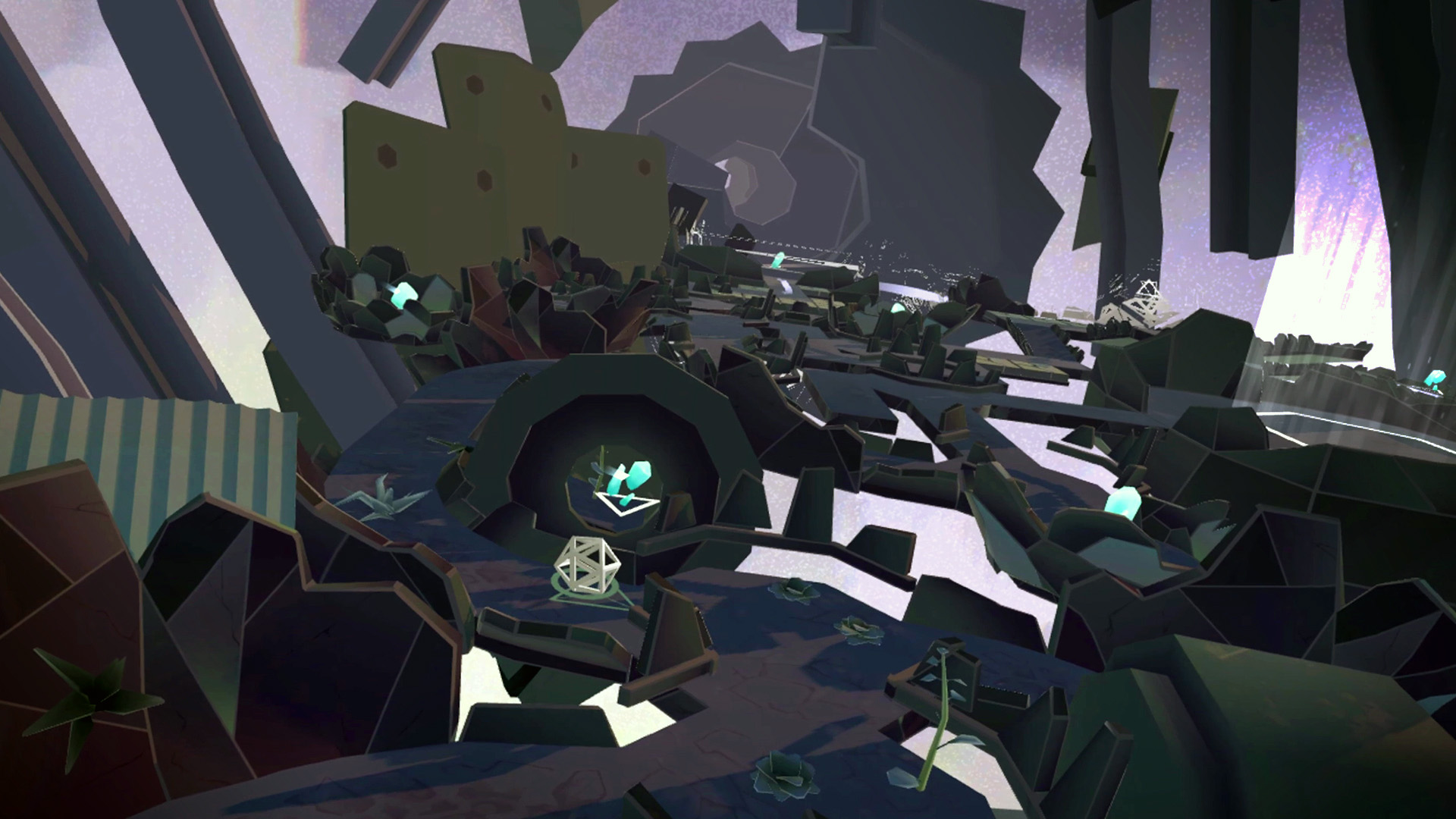 Graphics –
“We all live every day in virtual environments, defined by our ideas.”

The storyboards are comic panel-esque which have a “paper” like feel to them and the story “unfolds” as you progress followed by more and more challenges. The resulting effect is wonderfully tied together with the decision to have all of the detail elements kind of origami-like from a simple shape into a recognizable object that is generally nicely tied to the level design.

The 2D elements are detailed; with clean lines and interesting shapes, and have moving aspects against static characters to make a very easy to follow and uncluttered look. The art is detailed yet simple, and the colors are both vibrant and have a washed look to contrast and make the important details really pop, this actually carries over to the 3D elements with sharp, clearly bordered polygonal shaped assets with a combination of vibrant and washed textures.

The visuals are something they got very right.

There are few options to adjust, but as the game has a low impact on the GPU it doesn’t really need much in the way of configuration.

The Purdies:
• The unfolding animations
• Levels are themed and have a nice balance of interesting aesthetics
• Comic Style Panels telling the narrative

The Dirtiez:
• Some of the washed out textures and colors are a bit bland
• Minimalist graphics options for users with a little more GPU power

Gameplay –
“VR will never look real until they learn how to put some dirt in it.”

Arca’s Path has a simple concept, get the ball through the course filled with obstacles to the goal in as little time as possible.

You begin with only a few challenging obstacles; an occasional unprotected edge & maybe a moving platform or two… As you progress, there are branching paths, many of the edges are unprotected, there are large gaps that require the correct level of momentum to ramp across, and switches that lower bridges on top of the already mentioned moving platforms and such.

The later stages to offer some decent level of challenge and complexity, the biggest issue is that the levels are long and start to get repetitive, especially when the nails on the chalkboard soundtrack are grating away at your sanity.

There are speed challenges to replay levels with a time limit, these can really push the difficulty. But you are effectively replaying the same levels over and over, which again in it self is not a bad thing, if you enjoy them to begin with. Your mileage will vary depending on your competitiveness and ability to endure terrible music or silence. 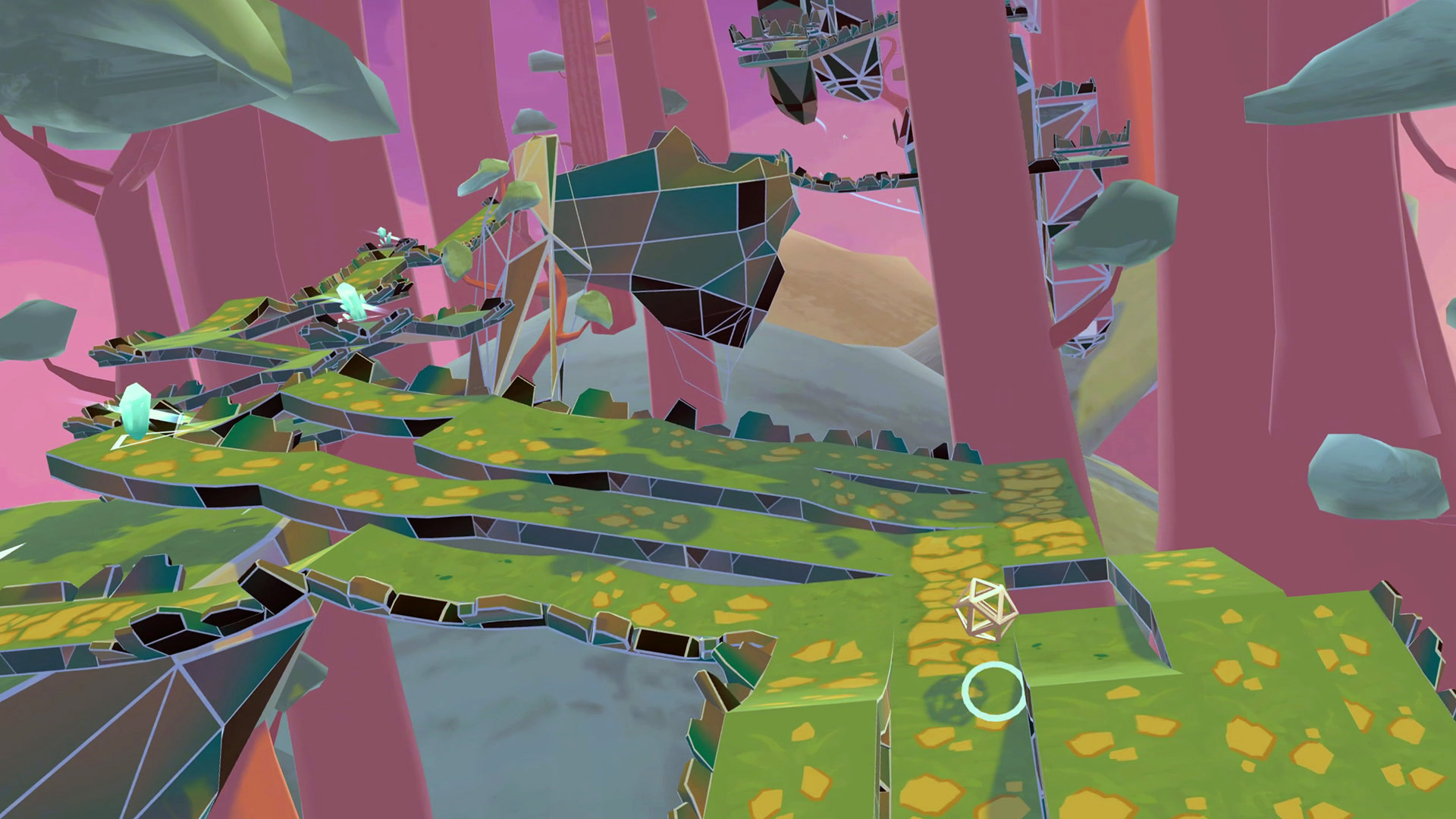 Locomotion –
“There’s nobody who works in VR saying, “Oh, I’m bored with this.” Everybody comes back.”

Locomotion, I’m not even sure this is the right terminology as you have no character or even avatar, you control a ball and the only variables are speed and direction.

Speed & Direction are controlled by your gaze or more accurately, by a cursor you place on the course by looking at it.

Speed is adjusted by the distance you place the cursor from the ball, and direction by where is is placed in relation to the ball.

Simple. Effective. BUT should not be the only option!

Here is why: As you play you might want to take in the visual splendor of the game. While there isn’t always a lot to take in, there are some very beautiful areas. This is difficult to do while whipping your head around to keep the ball on the course. They included a button that allows you to decouple your head movement from the gameplay for this reason, but it also stops the ball from being able to be controlled. Over time, your neck might also get a little stiff from the ridged finely adjusted movements needed to get those sick times. It is almost as if the game developer chose this as the ONLY option to differentiate themselves as a non-VR game simply in a VR space.

Controls – “VR is like dreaming with your eyes open.”

The Vive wands are supported and are used to minimal effect, basically button presses to reset the HMD and decouple your head movement from the cursor.

Adding an option to control the ball with a gamepad so you can really enjoy the visuals or simply as a preferred method of gameplay would have netted a higher overall score for this review. 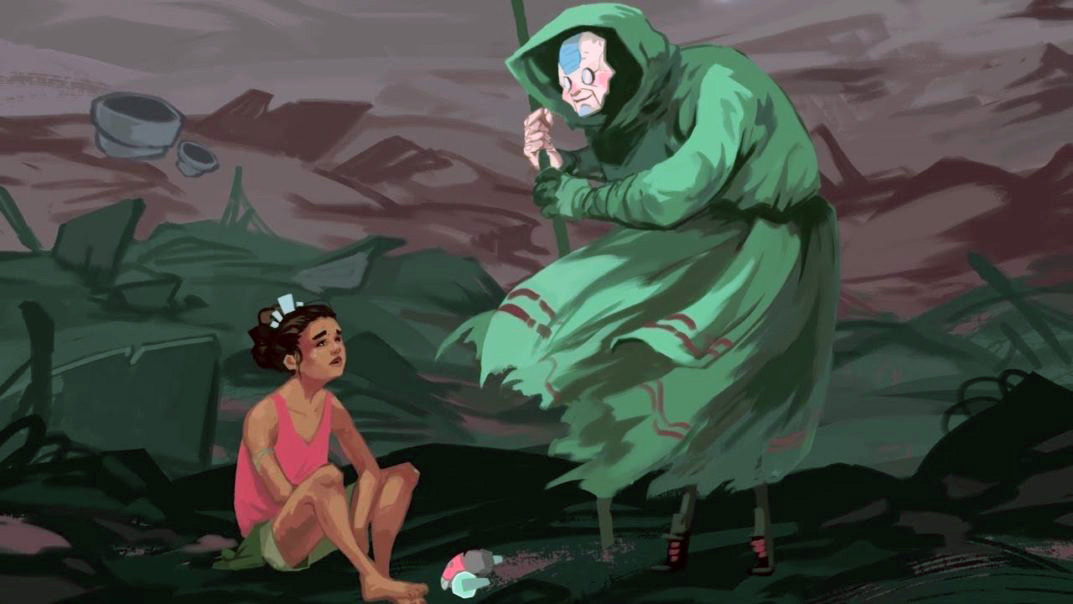 Verdict – “When virtual reality gets cheaper than dating, society is doomed”

The Good:
• Visuals are generally great with a few nicks in the paint; washed colors and a few blurry textures
• Solid feeling of speed
• excellent level design
• Good ramp in challenge
• Story is told well through the comic panels and is fairly interesting

The Bad:
• The ball feels floaty when it leaves the ground
• Sound effects are forgettable
• A little repetitive a times
• some levels hold your hand a bit too much with too many safety features on the track

The Ugly:
• Music is terrible
• Some levels are frustrating, with multiple branching paths or are WAY too long and get boring
• It takes a little too long to ramp up difficulty

Arca’s Path had some original ideas for a visual style unlike any other, or at the very least took the imitative to get great ideas into Virtual Reality before any other developer. The Comic book panel with motion and choice of silent characters and lack of narrator was bold, and still manages to tell an interesting story with equally interesting characters.
The gameplay is divisive, due to the choice of locomotion and controls; making the players head the means of control freed up your hands and allows for accessibility, but also limits the enjoyment of the visual aspects of the game and can lead to frustrating moments, especially in the time trial mode.
Sound FX are meh, but the Music is a genuinely irritating, and manages to work against the otherwise peaceful and relaxing tone, it feels as if the developer decided a week prior to release that the game was too slow paced and attempted to add false sense of excitement and urgency at the final hour.

The odd controls and terrible music really negatively impacted an otherwise good game, I am going to give it a Save For Later rating until the dev adds gamepad support, and I suggest you find your own soundtrack to play during gameplay.