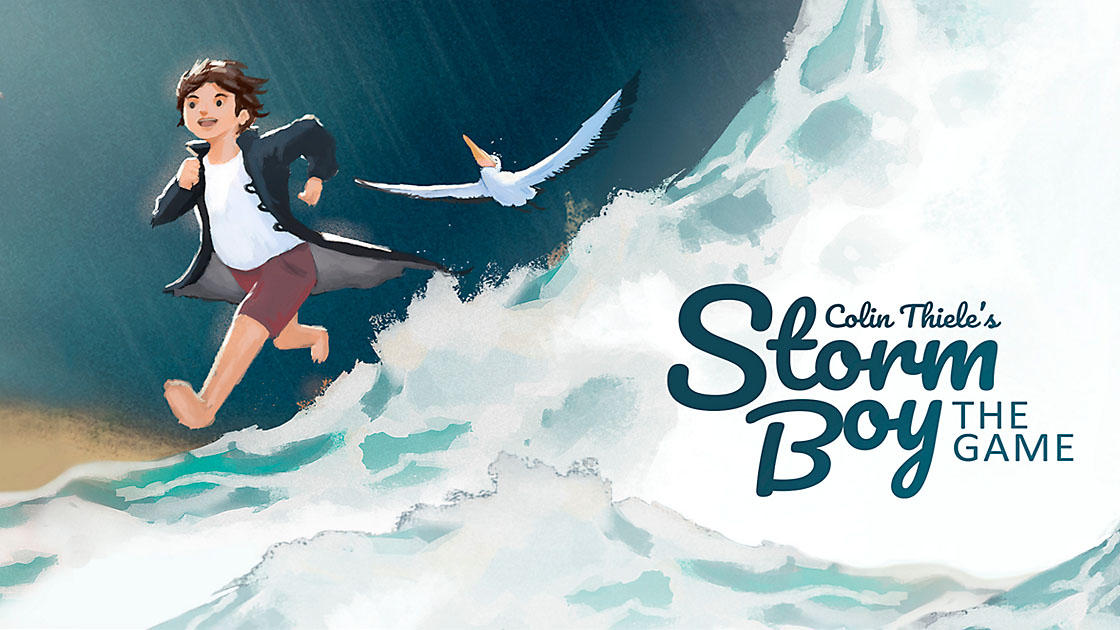 Storm Boy brings a beloved children’s classic to life in a game that is enchantingly charming, however brief.

Of the many things that I’m not, being Australian is one. This means that tragically my childhood was spent unknowingly devoid of Colin Thiele, a beloved Australian children’s book author, poet and historian. My adulthood would have suffered the same fate, had this game not introduced me to his wonderful work.

Storm Boy is a short interactive narrative game based on the 1964 book by Thiele and is currently available for pretty much every conceivable platform (PC, mobile, and console); I’ll be reviewing the Steam version, but I assume it’s identical on other platforms. 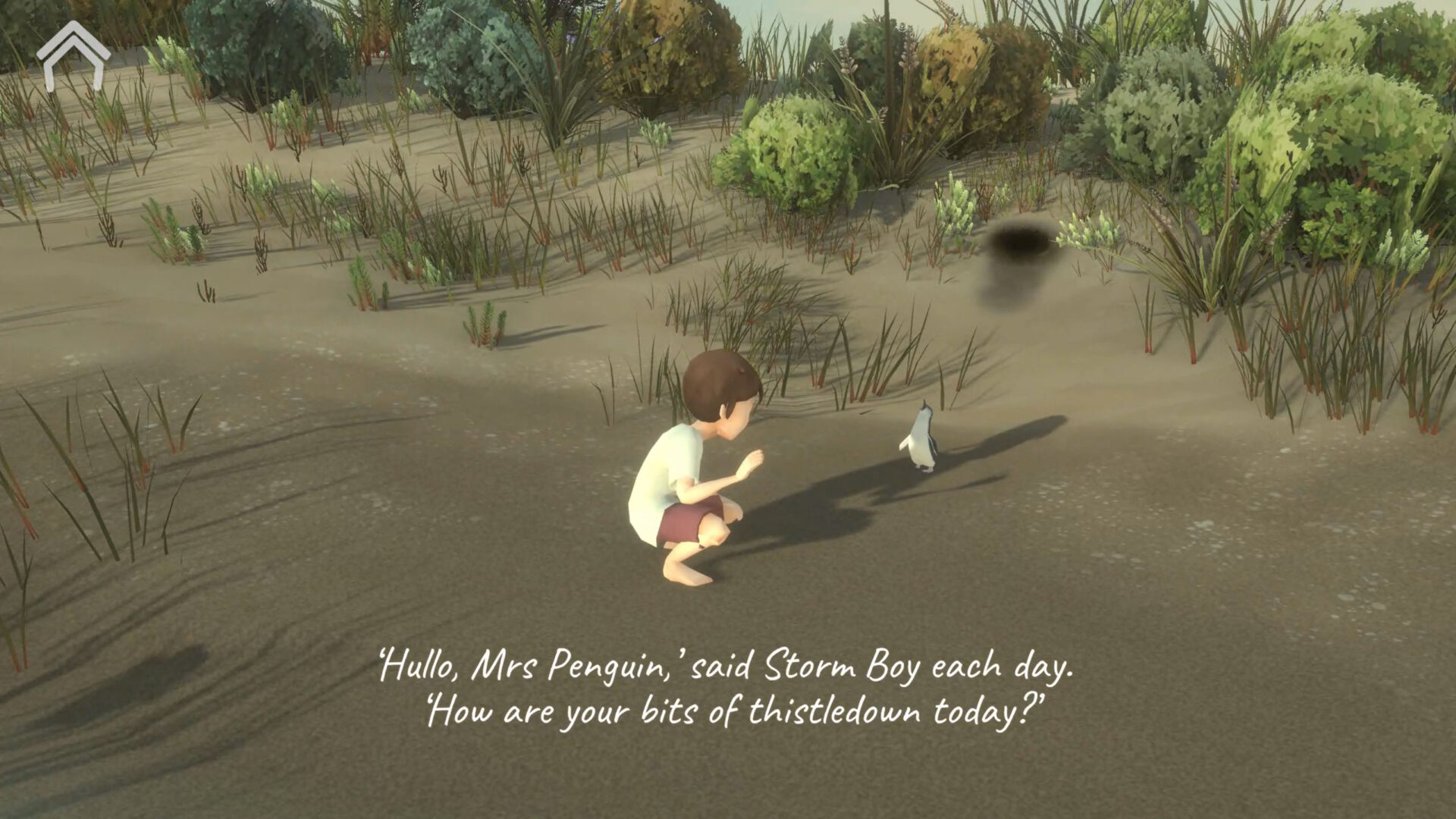 Storm Boy brings to life the adventures of a young boy, his companion pelican, and all the unique characters that populate the dunes and beaches hugging Australia’s Southern coastline. As players control the title character, they can move through lovingly rendered environments inspired by the book, with certain locations unlocking mini-games.

The story is told in text above the scene, as words fade in, and then out again as you move. If you miss something, you can backtrack to re-read any part, and once you complete the whole game you can select specific chapters to replay any of the mini-games. Interaction can be either with the mouse or keyboard and is very straightforward, making it accessible to players of all ages. 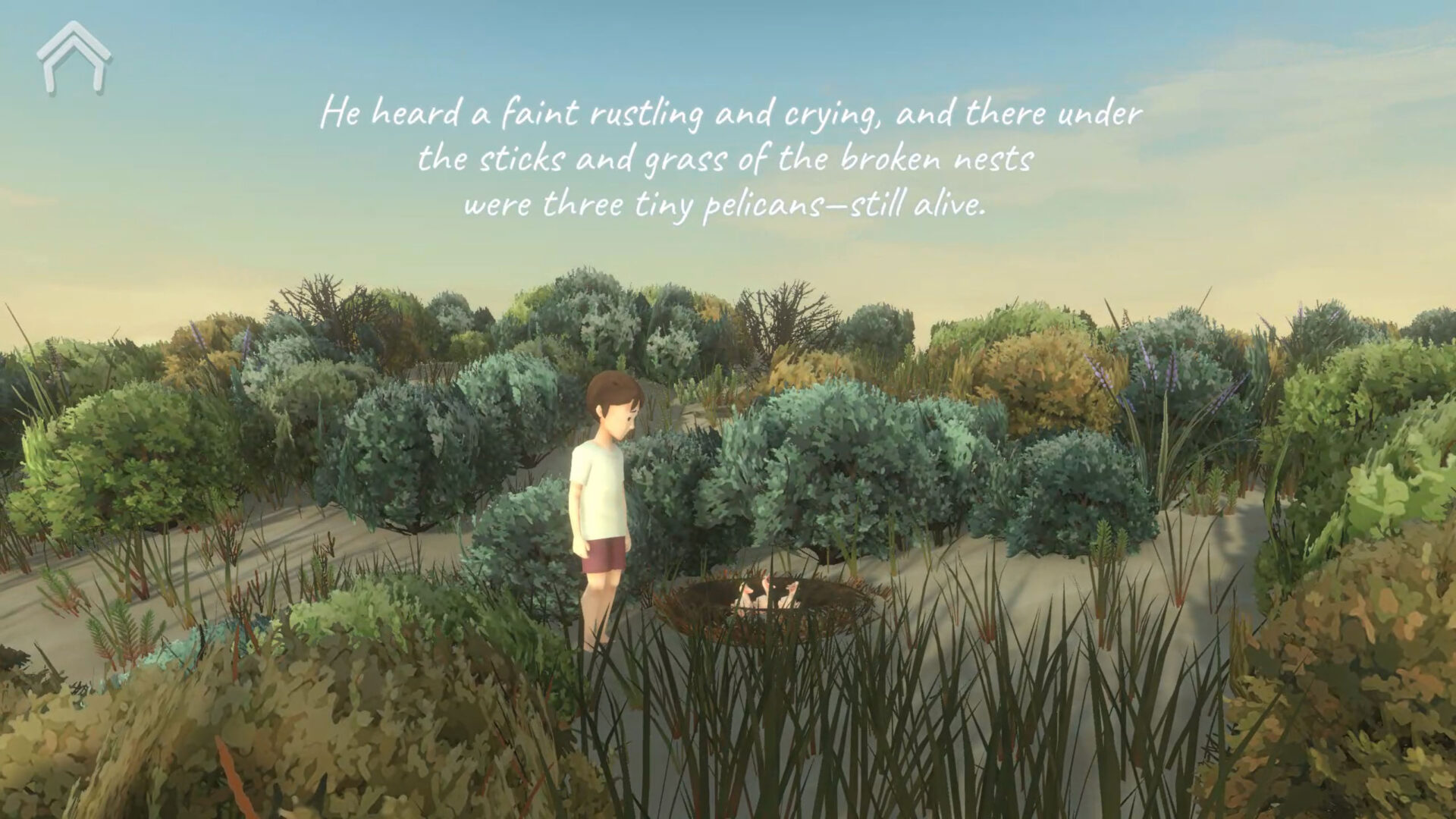 The mini-games themselves are not demanding or intimidating, and entirely optional. They mostly serve to punctuate moments from the story with open-ended tasks such as collecting cockles from the beach, gliding through an endless sky as Mr. Percival, or diving under the sea as you explore the coast.

My favorite, though, was a very simple diversion where you could use a stick to draw freely in the beach sand. It was fun to draw simple shapes in the convincingly sand-like canvas, but it was even more satisfying to hit the “erase” button and watch as the waves raced onto the shore and dissolved the artwork. This might sound like a silly thing to highlight in a review, but it was genuinely pleasing, in a beach-zen sort of way. 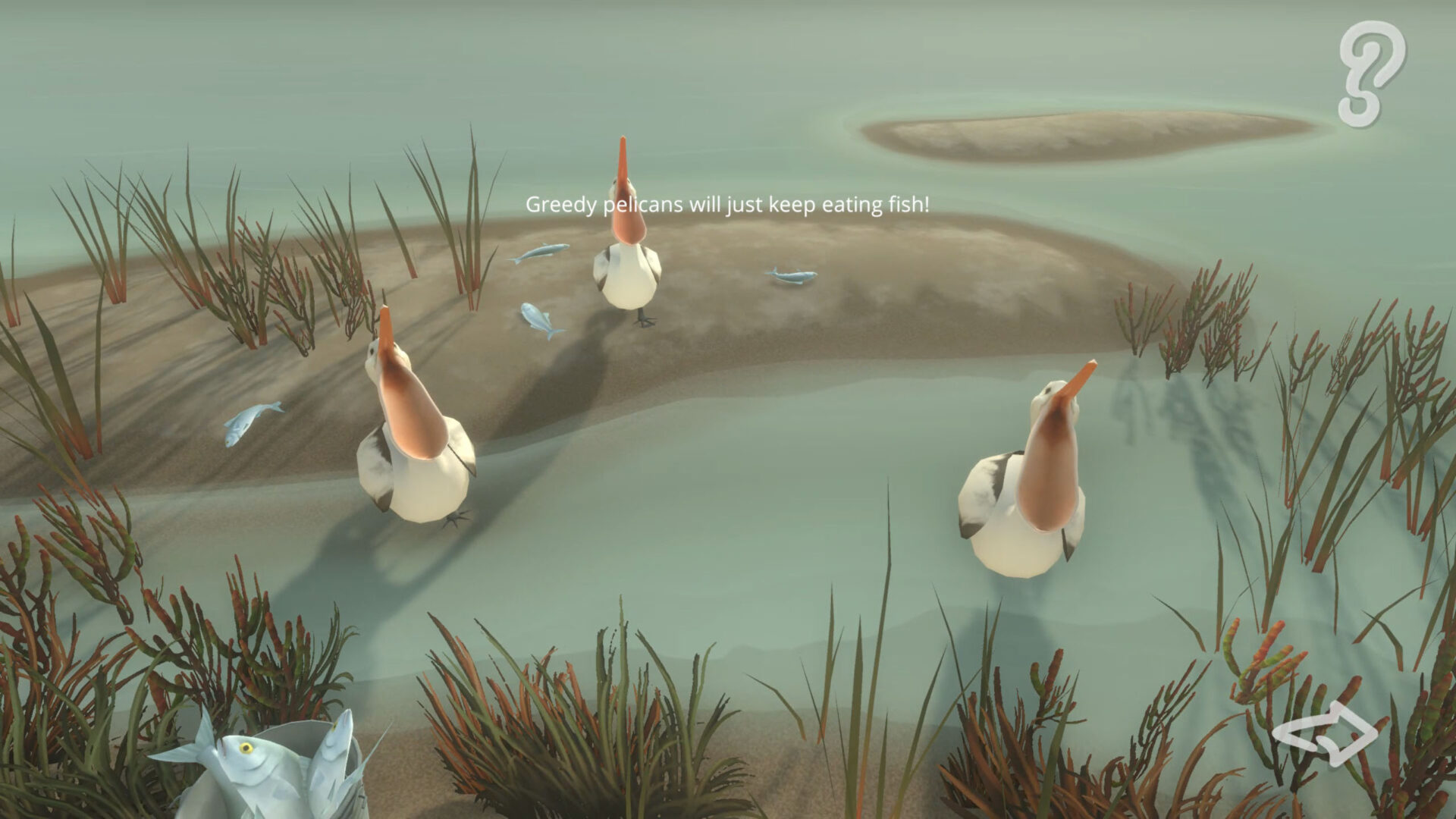 For better or worse, most of the mini-games have no goal, reward or consequence, nor do they demand skill or offer a challenge. The only exception is one “action” scene that requires the player to keep Mr. Percival from being blown off course while flying through a storm. On one hand, I like that the mini-games are completely benign because they fit better in the context of the overall story, and keep the focus on Mr. Thiele’s words, not on winning or losing a challenge.

On the other hand, the mini-games are so innocuous that most players, young or old, will probably get bored with them very quickly, and I doubt there’s any replay value (the one exception being drawing in the sand). 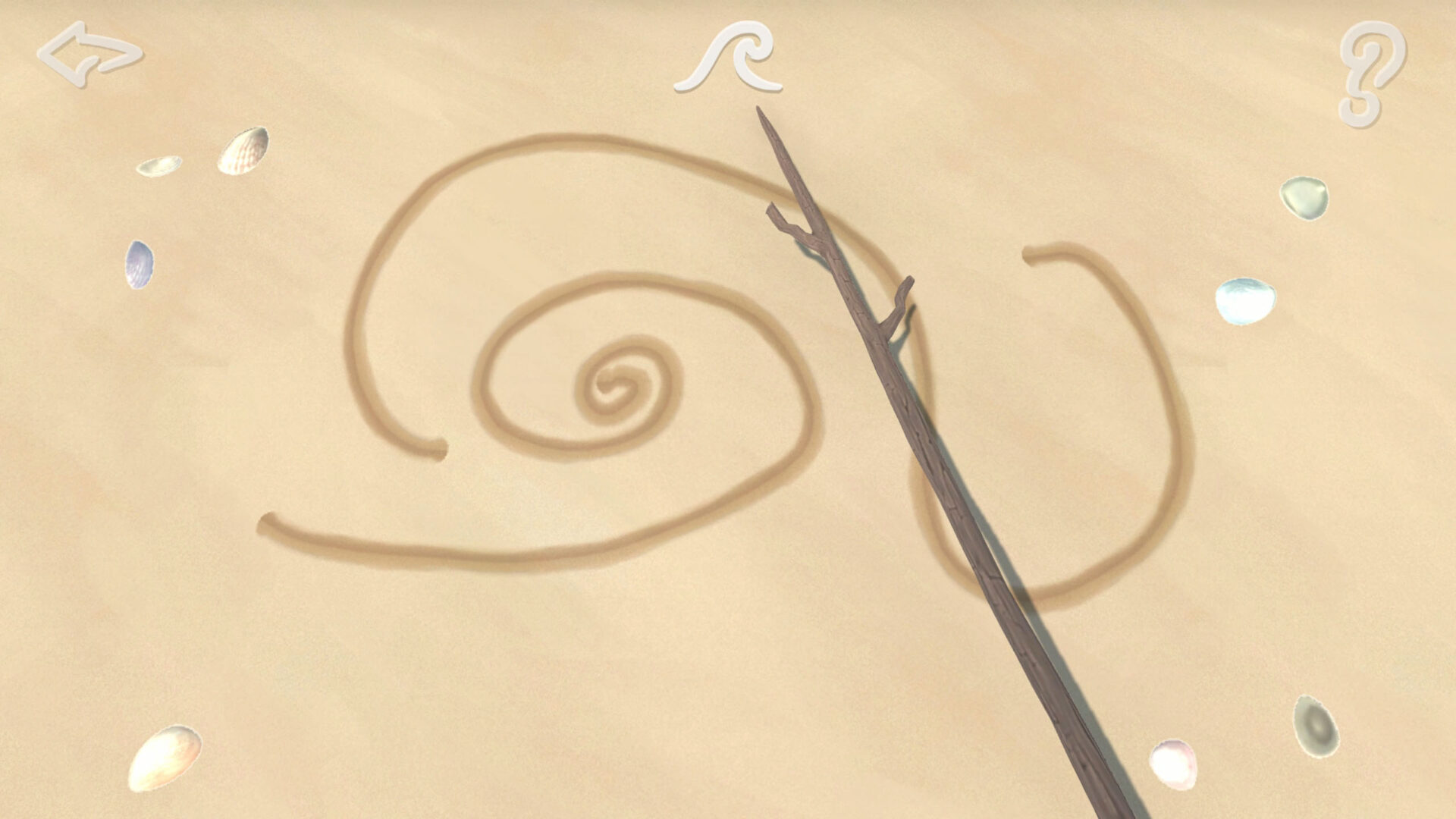 The graphics, character design and art direction of this game are fantastic. Everything has a loose watercolor style to it, and paired with a wondrous use of color it feels like you’re controlling an animated painting. The look of the characters is very well done too; they may be simplified, but they are faithful interpretations and are well animated.

The environments, sound and music work together to draw you into the world of sandy beaches and stormy skies. And though it has a dream-like quality, the style never once overshadows the honest power of the source material. It’s a perfect compliment to an already perfect story. 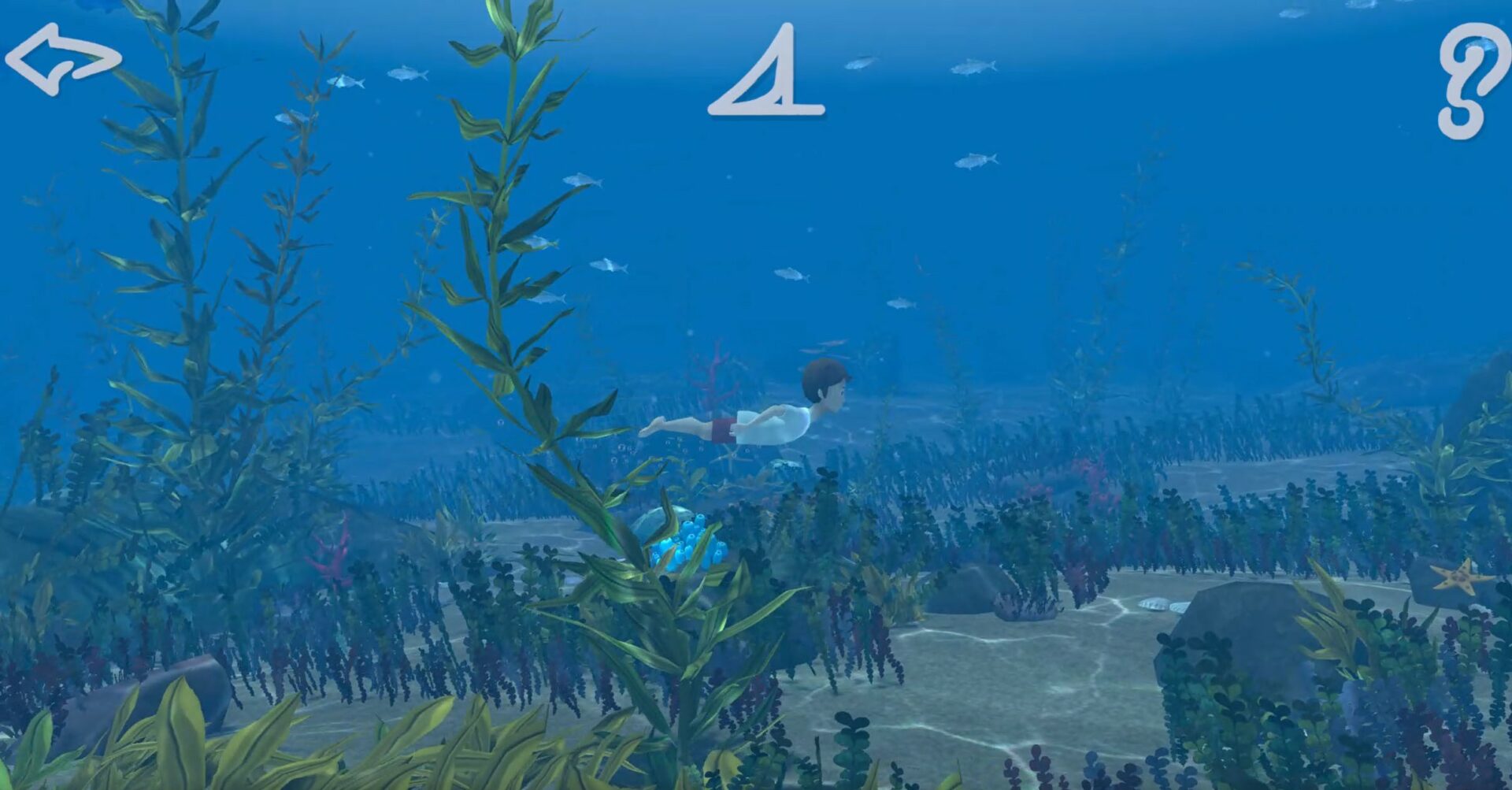 At the risk of sounding like a grouchy Grinchian grown-up, the only real complaint I have with the game is the price. To be fair, it’s not terribly expensive at all; I mean, I’ve purchased cups of coffee that cost more. But the cost-to-content ratio is noticeably unbalanced. The game is extremely short; there’s really no more than half an hour’s worth of material, and that’s if you go slowly. As mentioned, the replay value is questionable, so you’re left with a one-off title that’s asking for more than it offers in return.

What’s particularly irksome, is that the Steam version (at the time of this writing) is twice the cost of the mobile version. It appears to be the identical game, so I’m not sure what the justification for the extra cost is; unless somehow having a mouse and keyboard is taxable. The interaction of the mini-games feels like it was developed for touch-screen first and foremost, so if you’re going to get this game, you might as well go for the mobile version, since it’s probably going to be a more seamless (and slightly cheaper) experience, unless you can find the Steam version on sale. 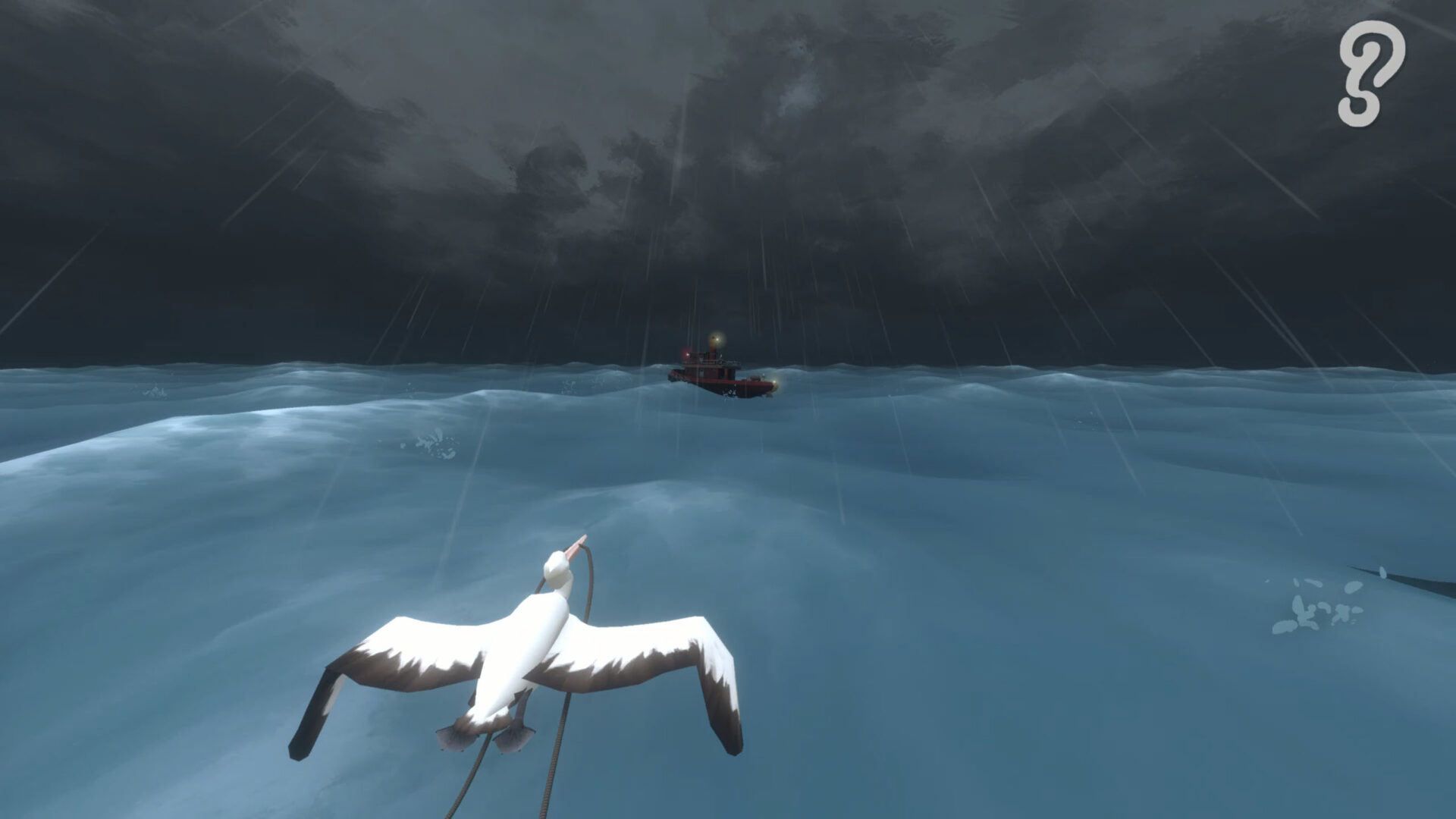 As great as the story is, as lovingly crafted as this title is, and as charming as the visuals are, I do feel that it’s a one-time only experience. In other words, if you are getting this for yourself, or someone you know, it’ll be over too soon. However, I will confidently make the argument that if you are getting this for a multi-user environment, it will absolutely see a lot of play. Schools, literacy programs, libraries, recreation centers, and similar environments would benefit from having this in their catalog because it’s short, easy to get into, has very endearing characters, encourages literacy and learning more about the world.

Above all, though, the strongest benefit is that Storm Boy is meaningful; it has a very sincere and honest message that is told in a respectful way that does not, at any point, talk down to its audience. That quality is inherent in the original story, but it is also faithfully recreated in this game. It’s clear the developers have respect for Mr. Thiele’s work, and for the children that will ultimately play this game. 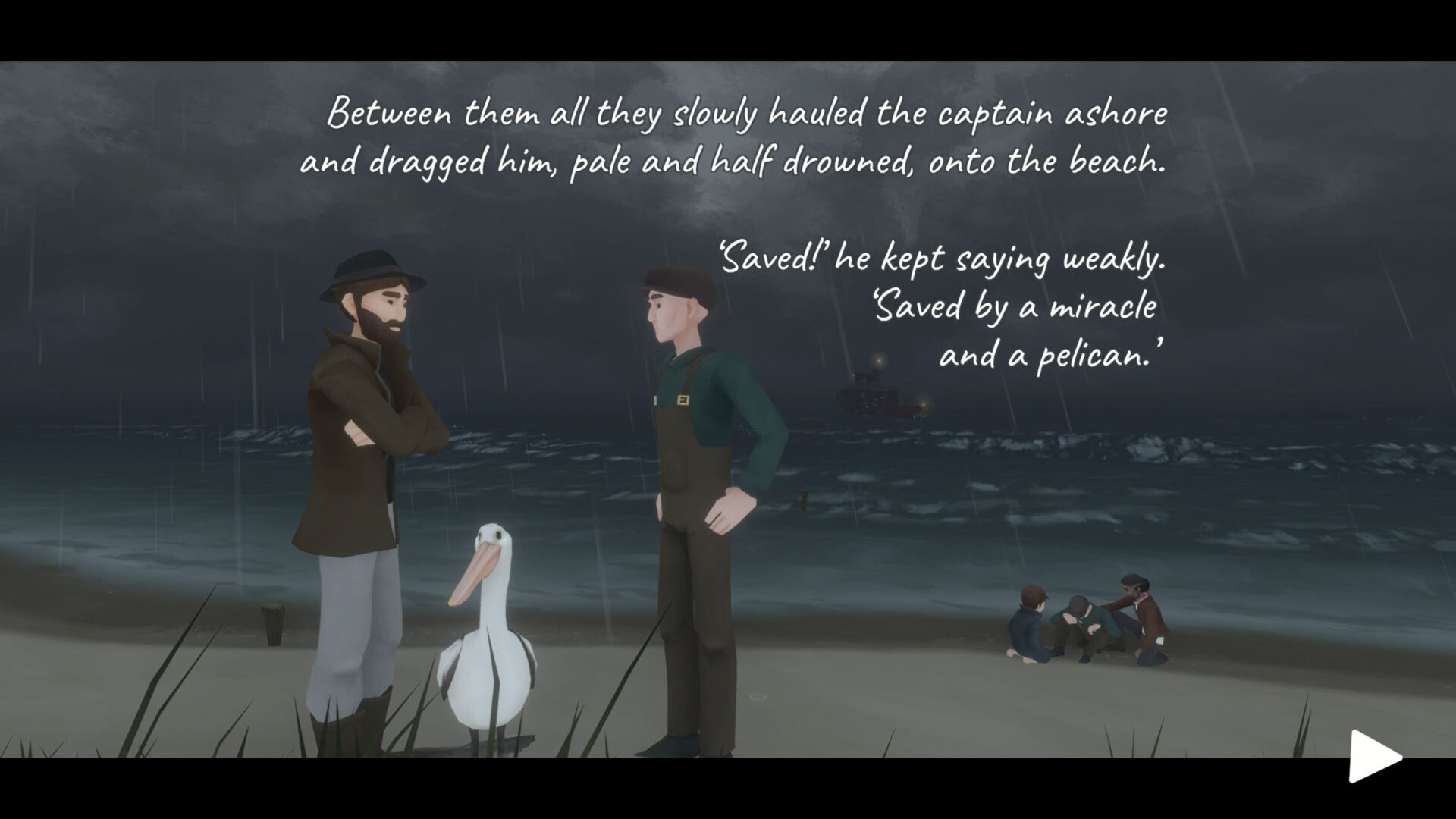 Something greater is also achieved because it’s not only bringing the work of a wonderful writer to a new generation of readers, but it’s also amplifying his voice to a much wider audience, giving his stories a chance to go global, so to speak. And clearly it works. Had it not been for this game, I wouldn’t have discovered Mr. Thiele, and for that I am grateful to Blowfish Studios for this release.

So, if you’re curious to get this for the young (or the young at heart) in your life, Storm Boy is indeed recommended; if not for the price or lengthy play, then for the amazing story, wonderful characters, dreamlike artwork, and moving experience. 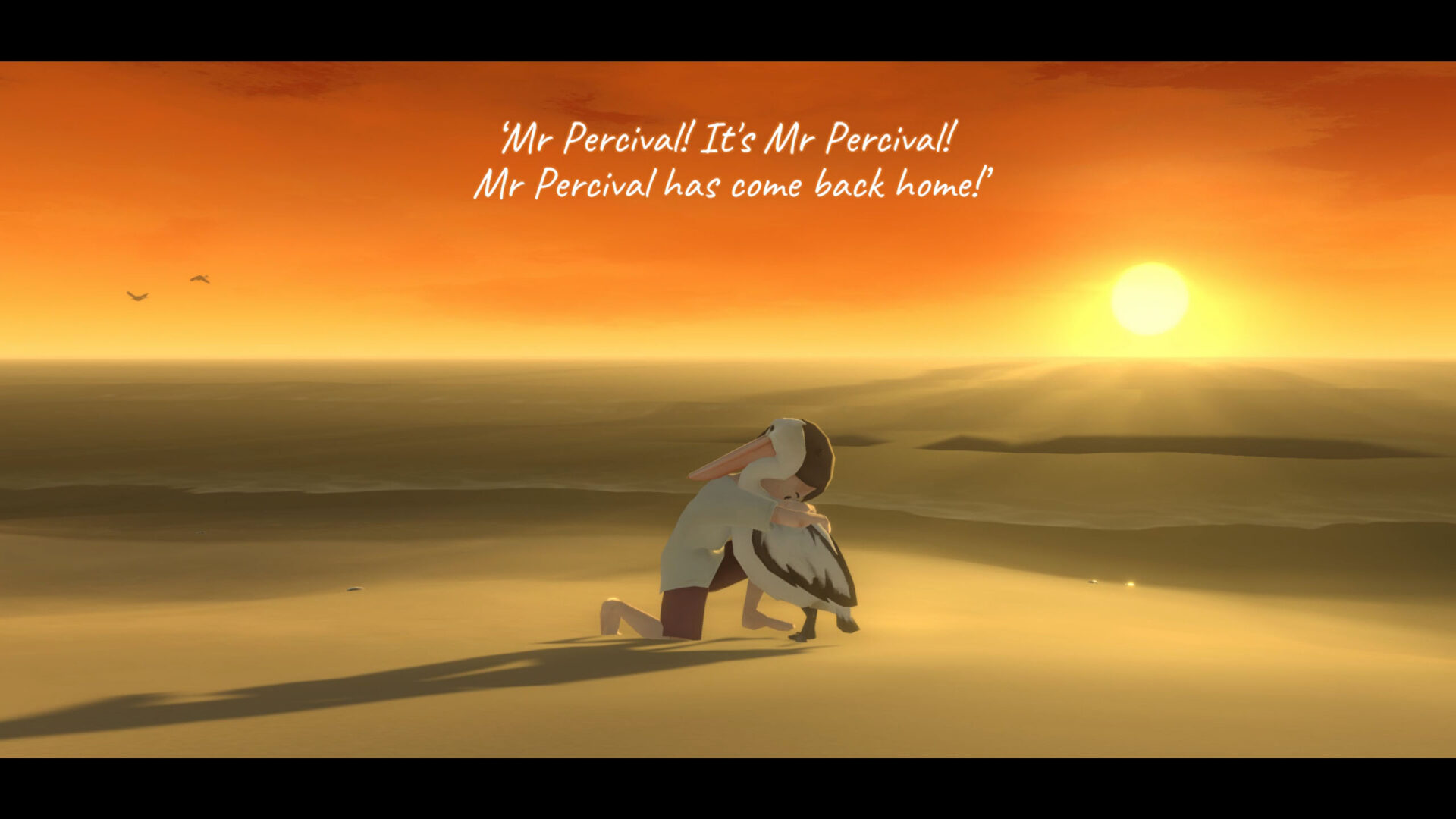