Firewatch tells an interesting story in a unique setting, brought to life with fantastic voice acting. It’s a couple of years old now, but still well worth a look.

Firewatch is a first-person adventure / walking simulator game and is the debut title from development studio, Campo Santo. It’s getting a bit old now, having been first released in 2016, but it’s been on my Steam wishlist for a long time. I picked it up on deep discount in a recent Steam sale and I am really glad I did.

You play Henry, a Colorado man fond of booze and tuxedoes (sorry; in-game joke). The game begins with a brief text introduction presenting Henry’s adult past, setting the scene for his arrival at Two Forks firewatch station, around which the core of the story takes place. I won’t spoil the backstory, as I found it very moving, immediately filling me with empathy for Henry and his situation. You’re able to make some either-or choices through the introductory text, but — as with the rest of the choices in the game — the outcomes are really only skin deep; you can’t change any of the major plot points.

The game proper begins with Day 1 of Henry’s time at Two Forks, where he is introduced (via radio) to his new boss, Delilah.

Initially I was unimpressed with Firewatch‘s portrayal of nature. Many of the rocks and rock formations look far too blocky and I thought there was too much repetition of them — though actually it turns out these repeated objects indicate places that you can climb, jump, or rappel up or down. But there’s also very little animal life and flora doesn’t seem as abundant and varied as I thought it should be; everything just seems a bit too sterile. The lake is rather bland, too. 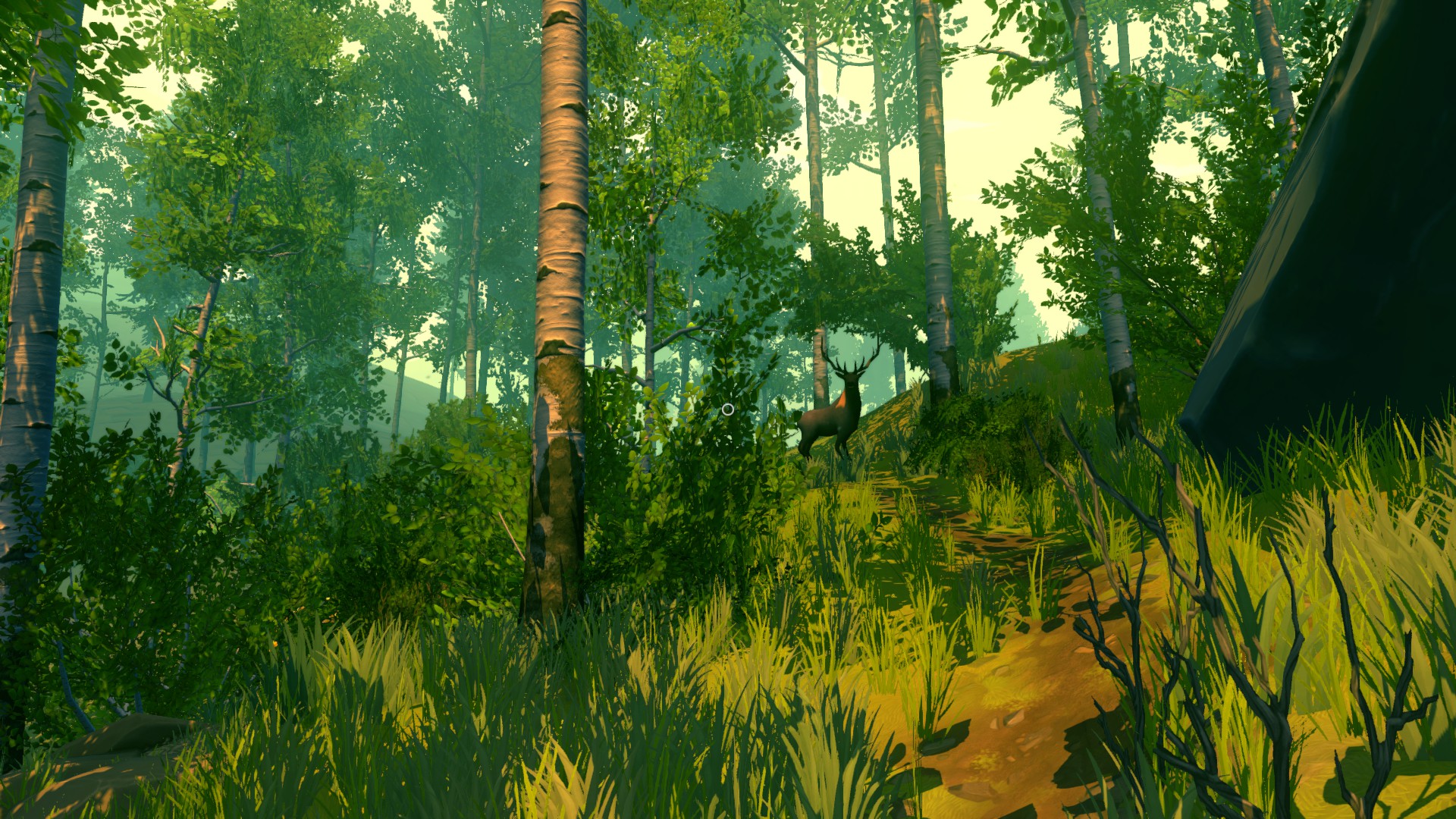 After playing for a short time, though, I came to appreciate the unique aspects of each distinct area in the game world, from the lovely aspen grove to the burned-out fire break, or the rocky slopes near Beartooth Point. The excellent lighting effects that clearly indicate time of day and progress of any nearby fires, and the smoke and wind effects, too, add significantly to the ambiance, making the world and particularly the trees come to life. Though I still miss the dynamism of life I’d expect to see in a wilderness area such as that portrayed in Firewatch, by the time I’d played for an hour or two I’d come to appreciate what was here, too. 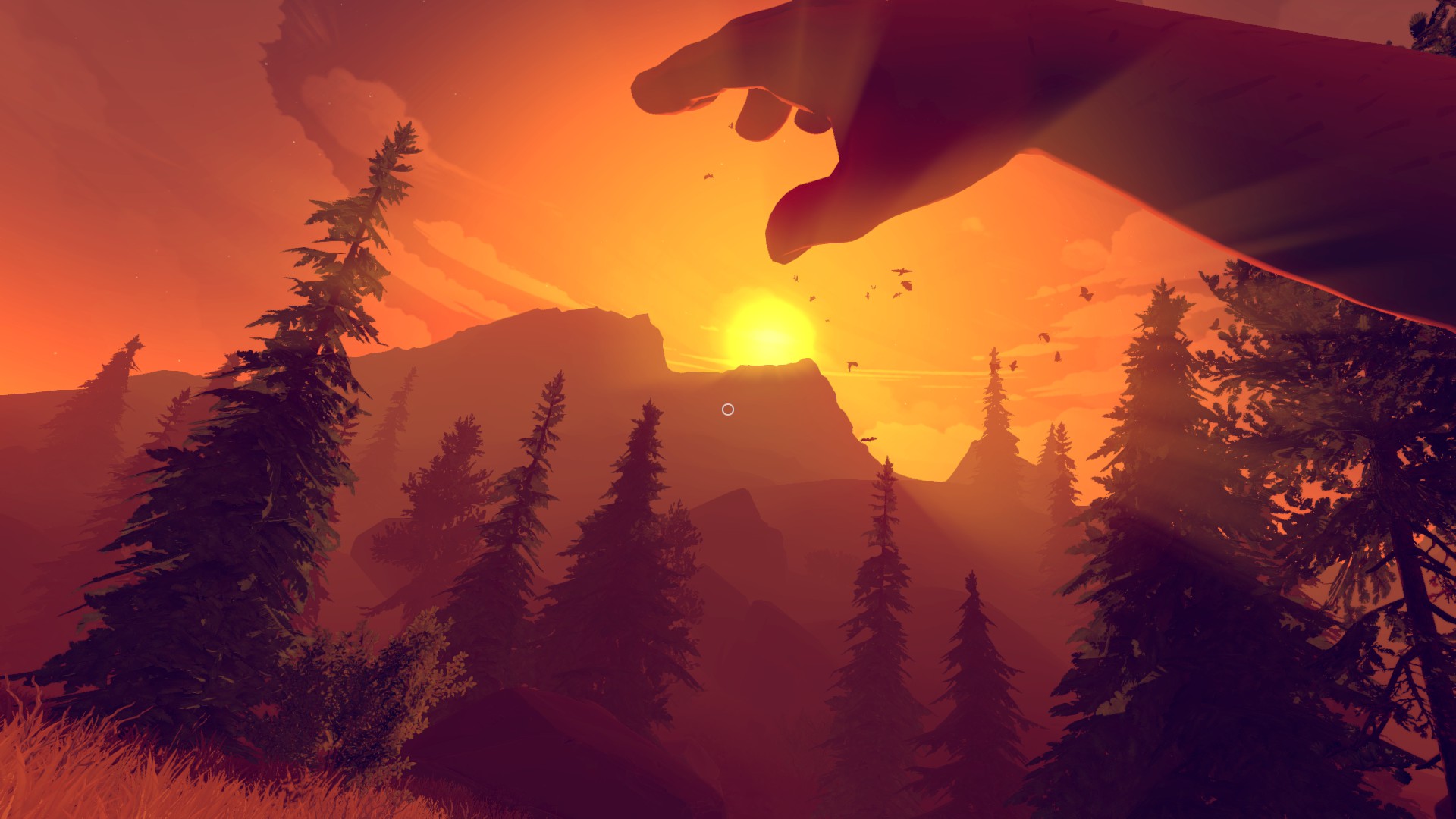 The game is fully spoken and the voice acting from the two main characters — Henry and Delilah — is brilliant. It’s some of the best voice acting I’ve heard in a game. The excellent script doesn’t hurt, of course, but these two actors really bring their characters to life, evoking a sense of understanding and empathy the likes of which I haven’t felt since my time with Elika and the Prince in Prince of Persia (2008).

Music is sparse, but very well chosen and applied. You’ll spend much of the game with only the sounds of nature, your footfalls and breathing, and Henry and Delilah’s conversation. But particular moments of beauty, realisation, or suspense are expertly enhanced with some wonderful and non-invasive tracks that fit the events perfectly.

Performance with everything turned up to maximum is mostly fine on my GTX1070-based laptop. The game does have a few hitches or pauses, though; I assume that’s while it’s loading in a new area. It’s a bit distracting, but not too bad. 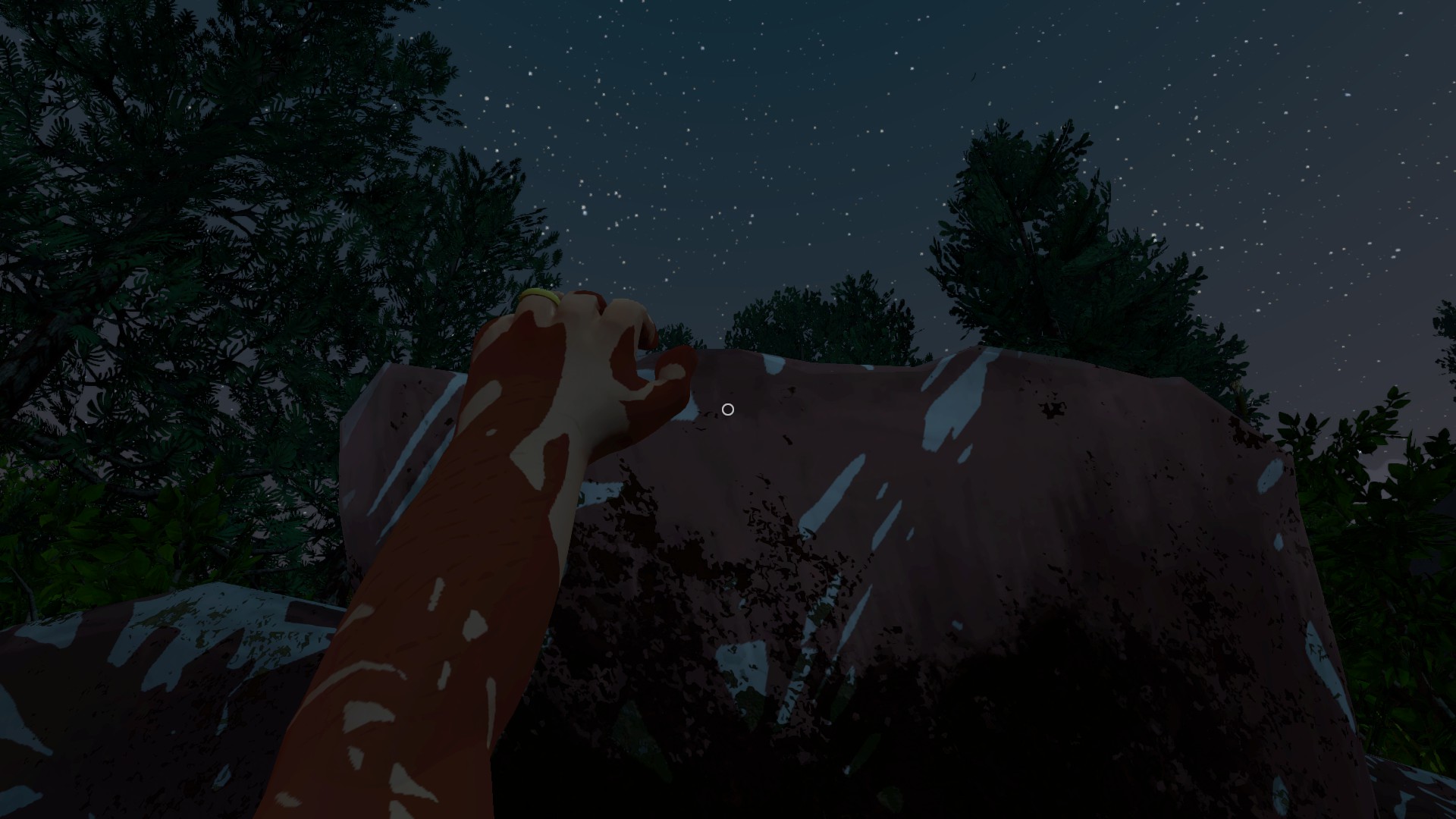 On arrival at Two Forks you pick up a radio and you’ll use this everywhere to stay in touch with Delilah, your boss, who also happens to reside at the nearby Thorofare tower. Your job, according to Delilah, is whatever she says it is. On Day 1 that involves finding out who’s illegally letting off fireworks, but essentially you’re there to keep an eye out for fires and monitor them when they break out. Other than your radio, you have a map and compass and, if you keep an eye out as you explore, you’ll quickly find a flashlight, too. You update your map with notes as you progress through the story; “Shitty Boss is Going to get Me Killed Hill” is probably my favourite landmark. 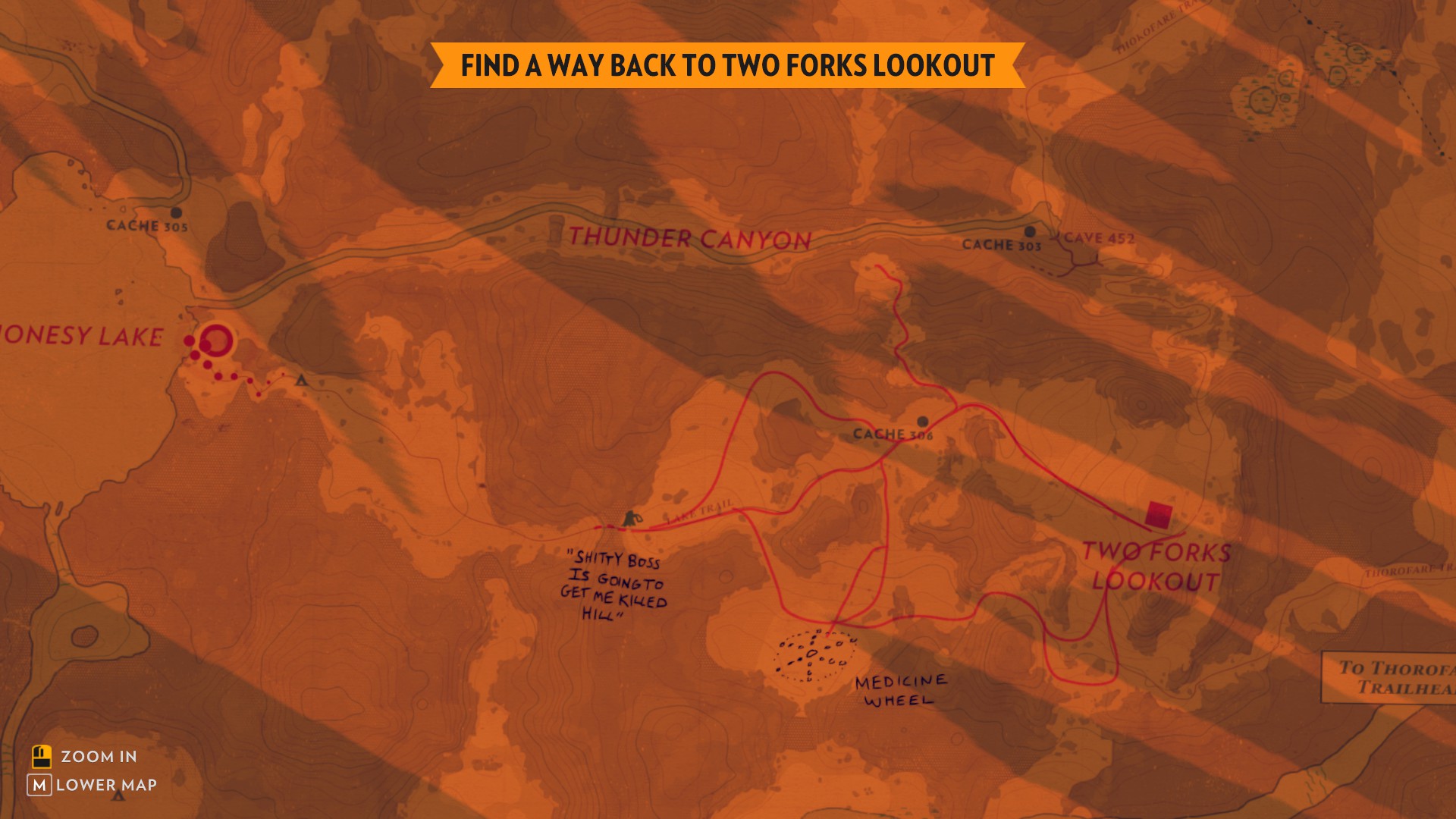 You control Henry using typical first-person controls: WASD for movement, space to jump, and the mouse to control which way Henry is looking and to interact with the game world. This isn’t a shooter or action game, though; the core gameplay involves walking around the big, but not huge, Two Forks area of the national park, using your map and compass for navigation, and following Delilah’s instructions over the radio. The basic gameplay loop has you hiking to different areas on the map, looking around or picking up or using something, talking a bit with Delilah, and then hiking to the next area or back to your tower. As with any most other walking simulators, the experience isn’t the game play, exactly, but rather it’s the story the developers tell you along the way.

The game necessarily has a fair bit of backtracking and covering familiar ground, as your only mode of transport is hiking and Henry spends every night in Two Forks watchtower. The developers have managed to reduce this in a few cases, though, such as by having you start a day already on your way to a spot of fishing at the lake, or sitting watching the sunset from a rock, or even in the middle of a conversation with Delilah, hiking towards some new mission goal. Though the story has Henry spending almost three months at Two Forks, the game itself is played only over a dozen days or so, spread across the Summer.

Ultimately, though you’re free to wander the map and ignore Delilah’s instructions and advice, the story will only advance when you go where you know you need to, and do what she’s telling you, which makes the game feel a lot like an interactive movie. Your conversations with Delilah can usually take a few different twists and turns, but in the end the story goes where the developers intended; any choices you make only give you a few altered lines of dialogue here and there. 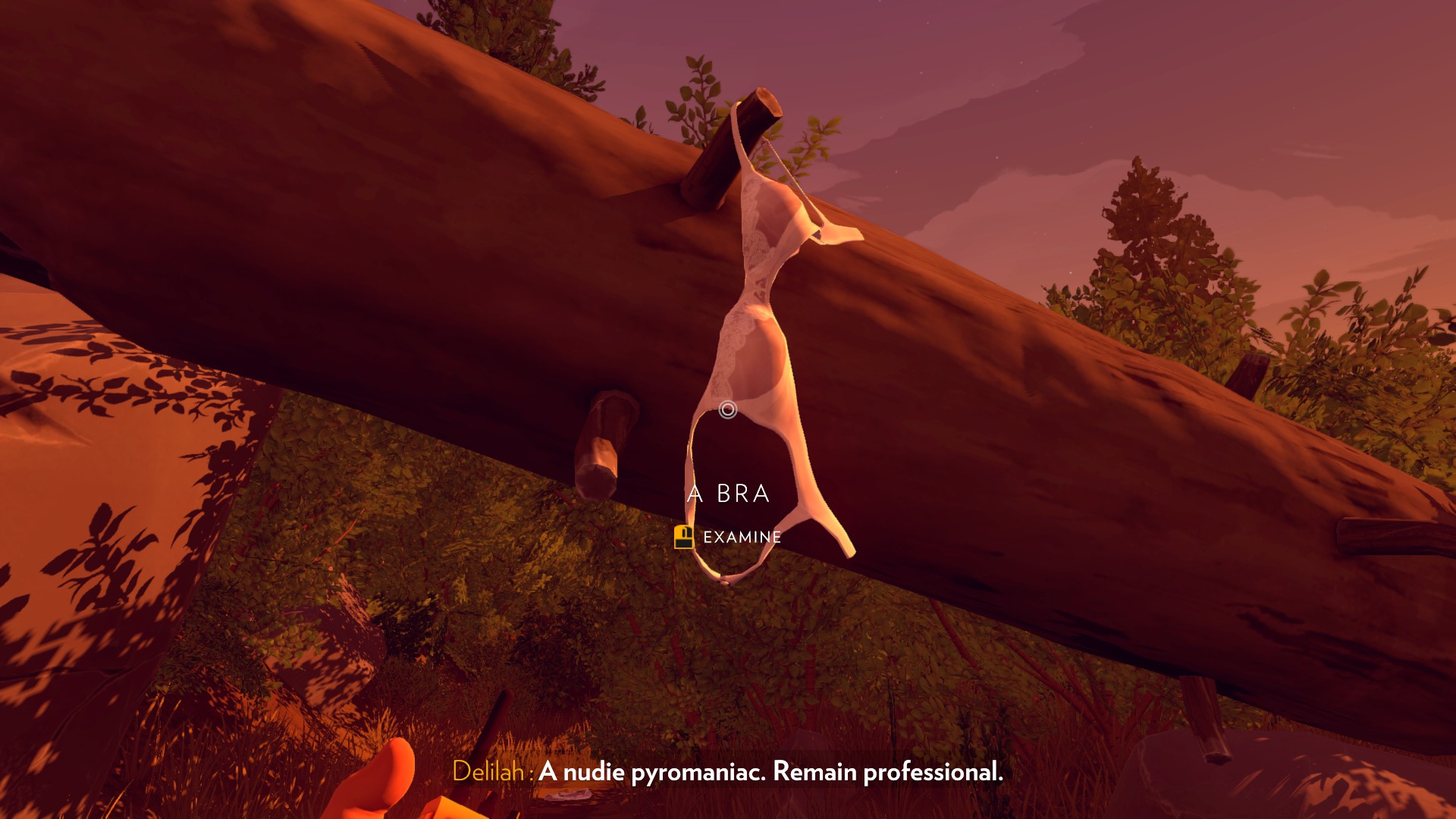 If the story weren’t so well written and the characters so well realised, Firewatch would fall flat on its face. As it is, though, everything comes together just so, to make one of the best story-based games I’ve played in a while. It would be really well suited to seated VR play, too, but I don’t know if that’s ever likely to be an option.

Firewatch is good: very good. Some might say that its main drawback is that it’s short, and thus doesn’t offer a whole lot of bang for your buck. But I think it’s just long enough to tell the story the developers wanted it to tell without overstaying its welcome. It has a good story with a well-written script, believable characters that you can actually care about, and some of the best voice acting I’ve heard, alongside mostly pretty graphics. It’s a shame the choices you make in the game are only superficial — I’d love to have been able to see different endings that depended on my decisions — and I did get ever so slightly sick of covering the same ground over and over again, but for the most part the interaction between Henry and Delilah kept my interest even in these parts.

If you appreciate a good story told in an interesting setting, then I recommend you take a look at Firewatch. The relatively short story may just haunt you for longer than you expect.

Note: I should probably mention there’s quite a lot of swearing in the game. It doesn’t feel out of place to me, but I suppose some people may be offended by it.