Push trees onto goblins, use a stunned troll as cover while you kill its friends, set spiders on fire and watch them burn down a forest, and laugh at lots of silly jokes!

Claude the Claustrophobic, a powerful, but seemingly inept, wizard, has taken hold of Fort Triumph, the powerful fortress that defends the land against incursions from the breach, and has summoned a horde of undead that’s spreading across the land. Other opportunistic creatures have taken this a cue to begin their own attacks.

Your party of four novice adventures has been hired at a discount price to defend a small village. For reasons not entirely your fault, you fail in your duty, and set off with the sole survivor of the village to discover and then foil Claude’s plan, earning considerable money and fame in the process, of course.

Graphics are nice, clean 3D, with a cartoonish look. They’re not astoundingly detailed, but models are nicely made and reasonably well animated; textures are colourful, if a little plain; and special effects are mostly good, though burning objects such as trees can look a little strange sometimes. 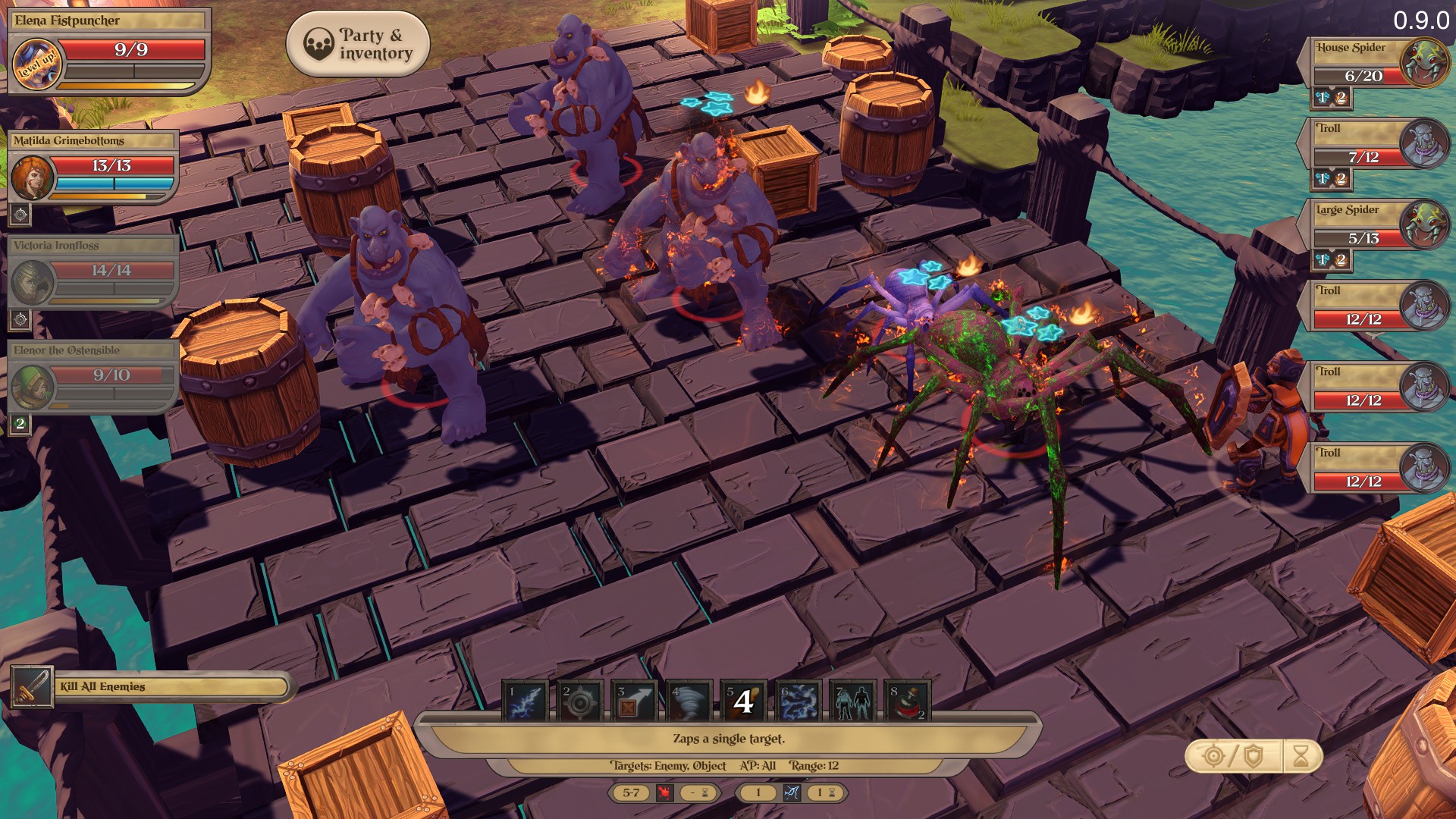 You can move the camera freely to peer around and see almost anywhere, and it zooms in automatically for action shots when you attack. The interface mainly works as expected, though I did find myself right-clicking to try to drag the camera around when I first started, which was nearly fatal: right-click executes movement and action commands. A BATTLETECH-like “if I were to move here, who could I see and what chance would I have to hit them?” type of interface function would be a great addition, but that goes for most turn-based strategy games.

Music is good in a sort-of epic fantasy style. It gets a bit repetitive at times, but mostly it just provides a nice background sound platform. Sound effects are mostly good, too, though some seem a bit wrong; the ranged attack miss sounds like a hit.

There’s a fair bit of lag running in full HD with everything turned up to maximum on my GTX1070-based laptop. This is particularly noticeable on indoor levels, but can be seen anywhere, especially when rotating the camera or taking an action that affects multiple enemies at once; the game often freezes briefly. 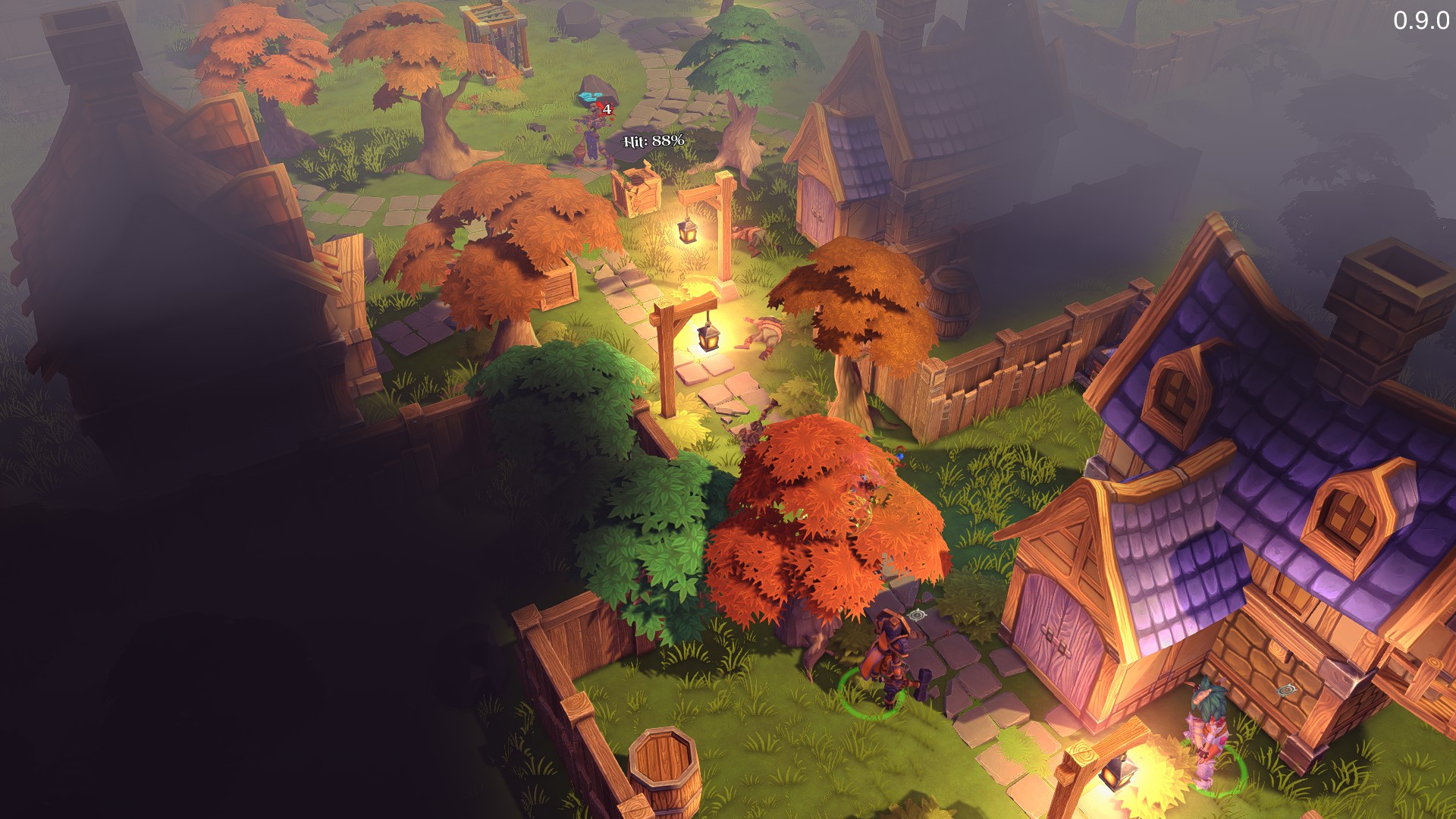 Fort Triumph is in Early Access and this is currently most evident in the lack of content available. The short prologue introduces the controls and gameplay mechanics, and provides a bit of background information on Claude. This plays slightly differently to the main game, which currently comprises only a single chapter, with up to four more (based on the interface gaps) on the way.

The main game is split neatly into two game modes: overland and combat. Overland is like a simplified King’s Bounty, where your single group travels the world, facing procedurally generated encounters. Encounters mostly provide magic (currency) or renown (for hiring heroes) — as well as earning experience points for your characters through combat — but occasionally other items, such as potions or armour to use in your characters’ two inventory slots each. Every in-game week the other factions in the game — undead, goblins, and more — are also trying to collect resources and fighting, and each week they may grow stronger or respawn. 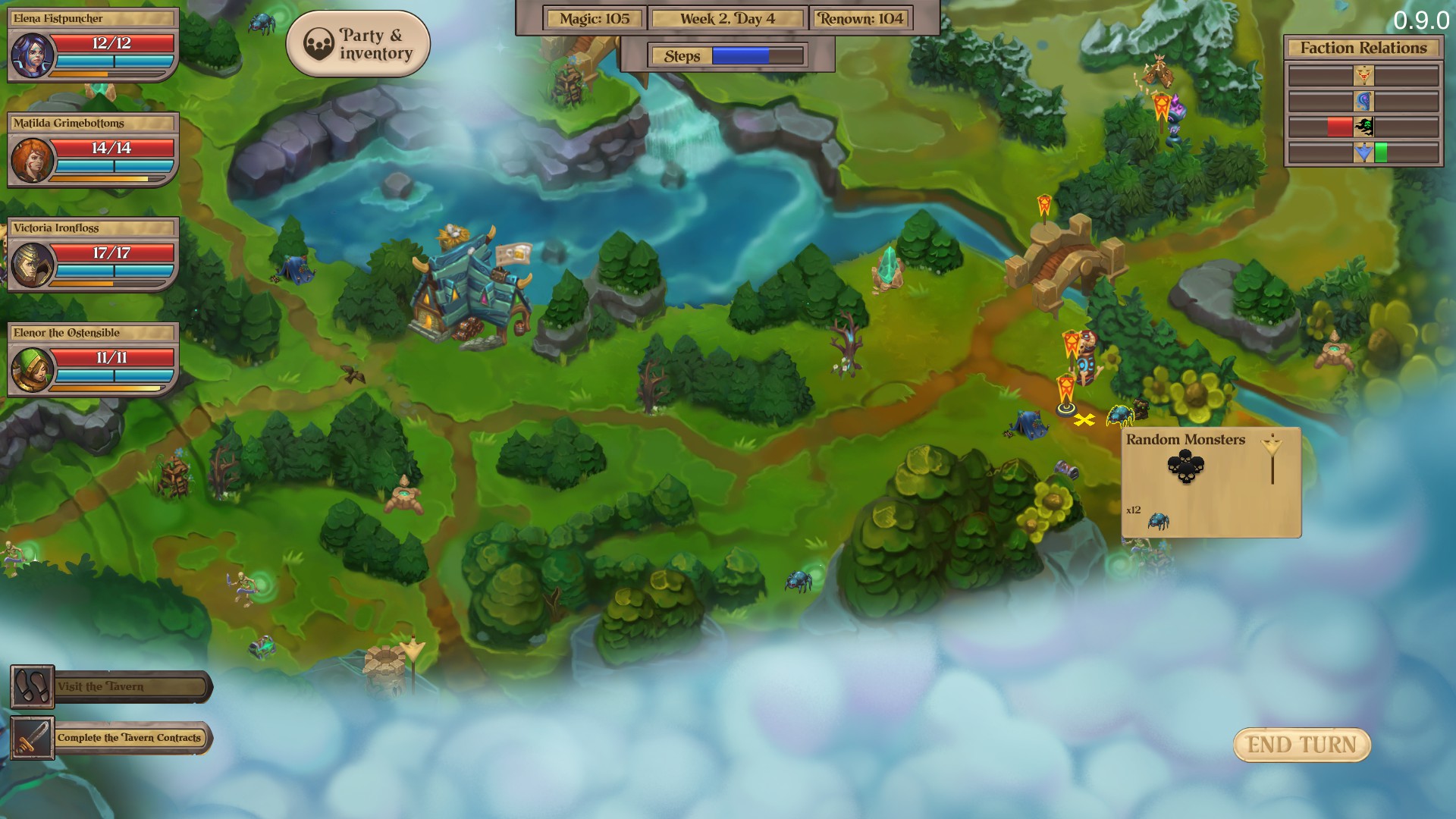 Combat is in the tactical turn-based style, and is often compared to the X-COM series. Here you control your four characters, plus potentially up to three NPCs, individually and try to complete the mission objectives, which are almost always to kill all the enemies on the (relatively small) encounter map. Each character has two action points: the first for movement the second either for extra movement or for attacking or using a defensive ability, such as overwatch. The use of cover is important, massively reducing an attacker’s chance to hit.

Each unit is either melee or missile. Melee units can only attack hand-to-hand, but can defend themselves, halving incoming damage for a round, and prevent adjacent missile units from shooting simply by being there. They can also have an attack of opportunity if anything moves within reach. Missile units can attack at range and use the classic overwatch ability, where they pop out and shoot at an enemy moving within range on the enemy’s turn, but they can’t shoot when next to an enemy melee unit. They also tend to do less damage per hit.

What makes combat much more interesting than the simple rules suggest, however, is the use of pushing or pulling forces, and destructible objects in the environment. Is your target behind a tree, leaving you little chance to hit? Never fear! Just use a knockback arrow or whirlwind spell and knock the tree over, killing your target and reducing cover there for the next wily enemy. Are three giant spiders rushing towards you in a group, ready to tear your face off? Don’t worry! Throw a fireball and watch them burn, or better yet, open a vacuum-like portal to suck them all in together, stunning all three and leaving them defenceless. 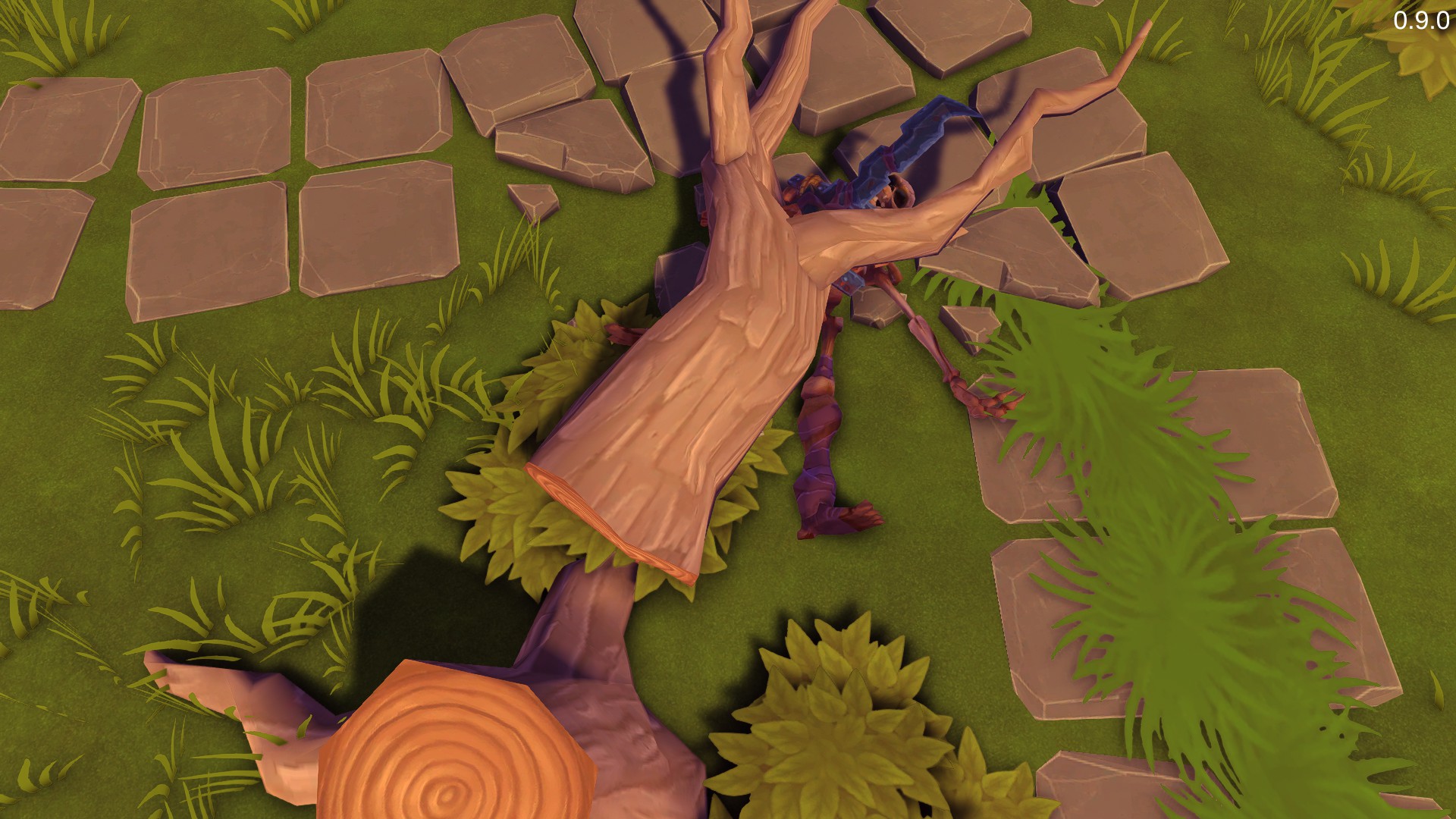 Once you learn how to push and pull both enemies and the environment, combat becomes a breeze. Unfortunately, though, it’s a big part of the game’s undoing. Each combat area includes lots of objects that can be moved around like this, so every battle is the same, no matter what type or number of enemies you’re fighting. The same actions and tactics work in basically every battle, including the last one; I don’t think I even got hit more than once in that one because every round I stunned or blinded almost all of my enemies. It only lasted three rounds. Poor Claude.

The game’s other major downfall is the lack of point to the overland mode. It looks nice and I played along for a couple of hours, diligently working away at collecting resources and fighting monsters. But with all of the game’s four character types available at the start, no way to hire more than four, and only limited progression through the skill trees available for them, I quickly realised there was no reason to bother with factions, magic, or renown; you can head straight for the quest locations and move the game along quickly, ignoring 90% of the map. 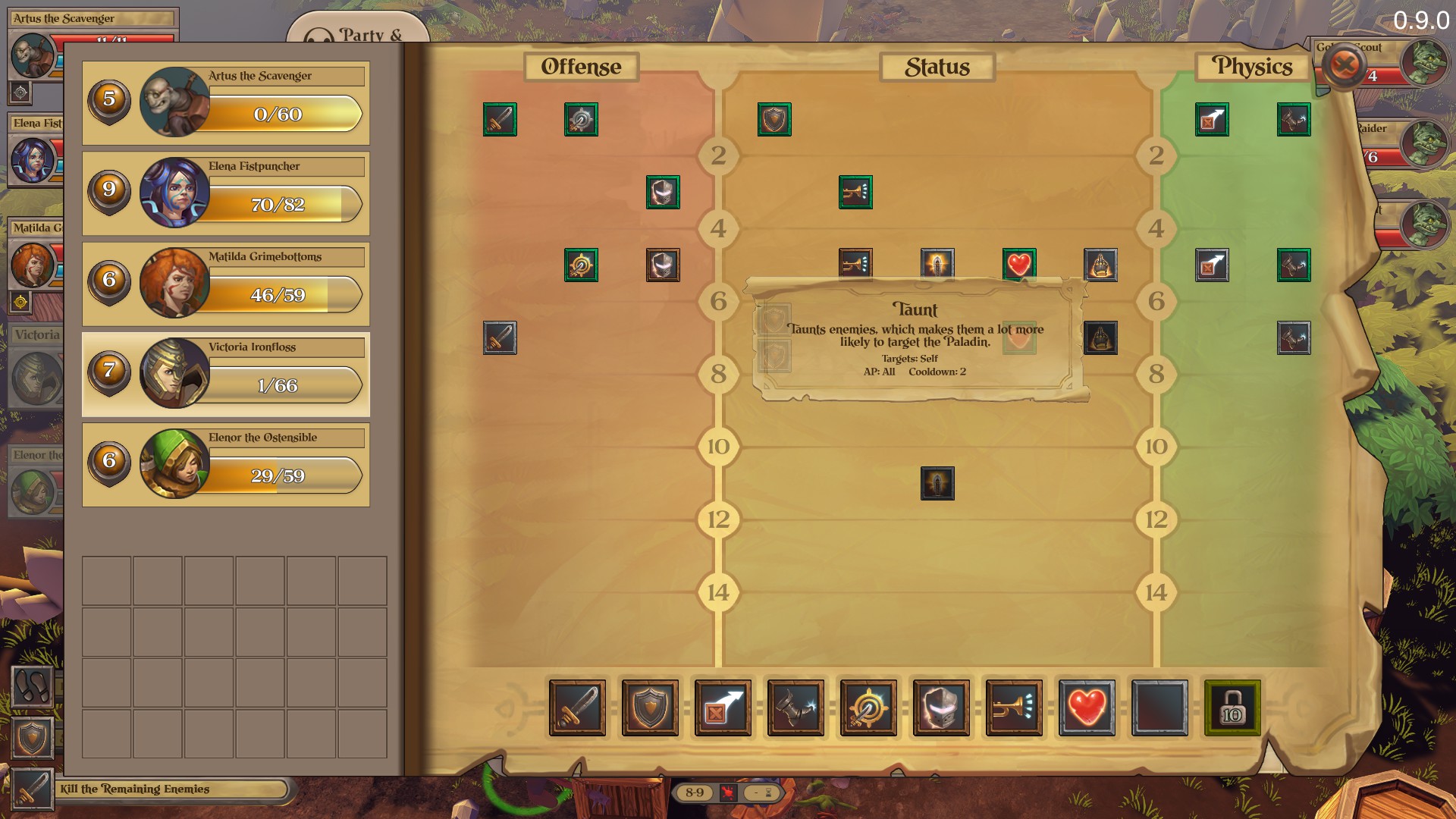 There are also a few bugs here and there, though for a relatively new EA game from a small studio it’s actually remarkably stable. I found a repeated CTD bug (avoidable) and noticed the angles shown for pushing and pulling are sometimes wrong: objects can sometimes be moved diagonally by accident even though the force arrows show movement in one of the four major directions.

On the other hand, the script is fantastic, barring a number of small grammatical errors. The jokes run fast and thick, with silly puns, pop-culture references, and general silliness that I found hilarious. The developers are friendly and very responsive, too, which is always good for an EA game. 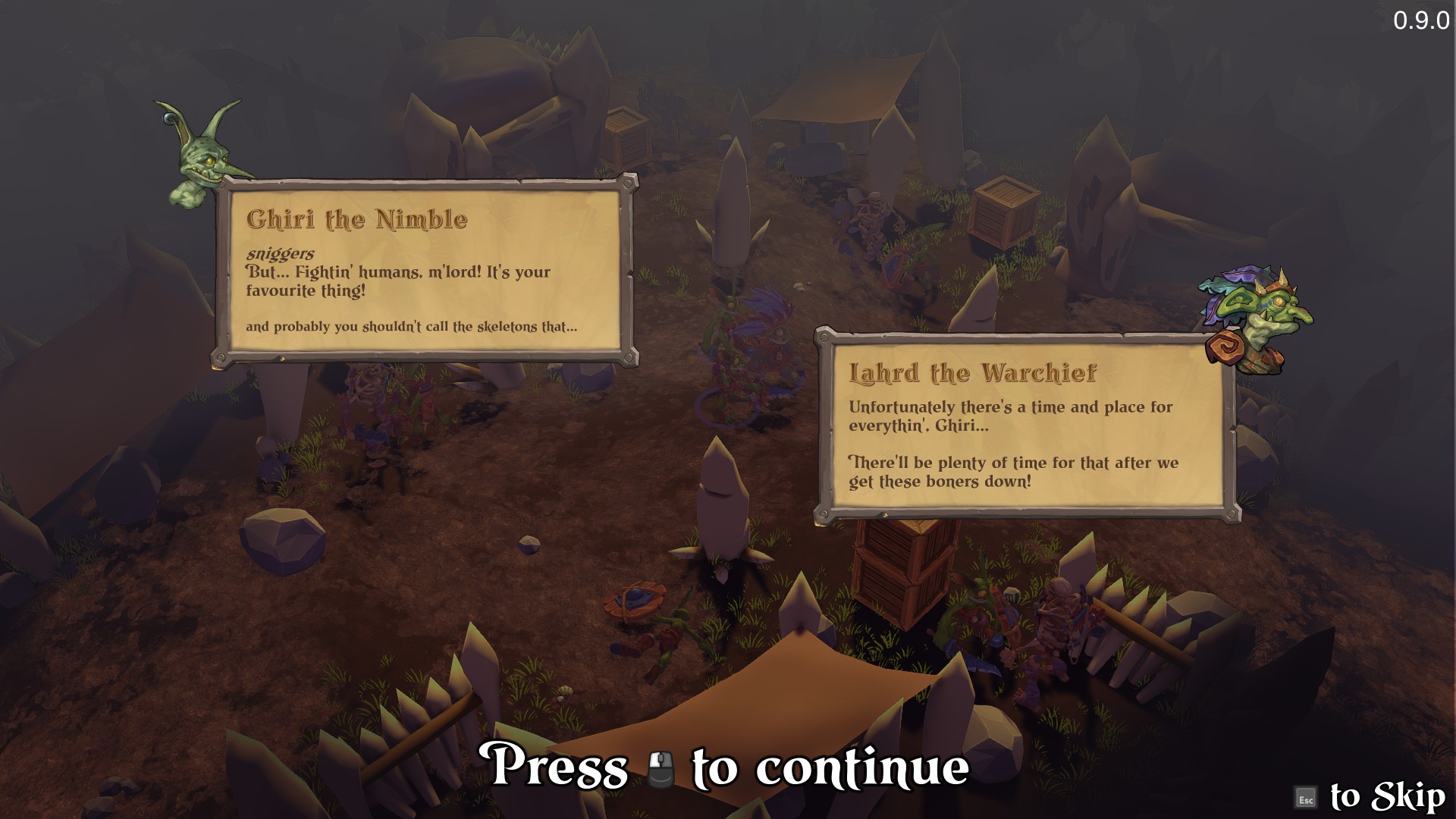 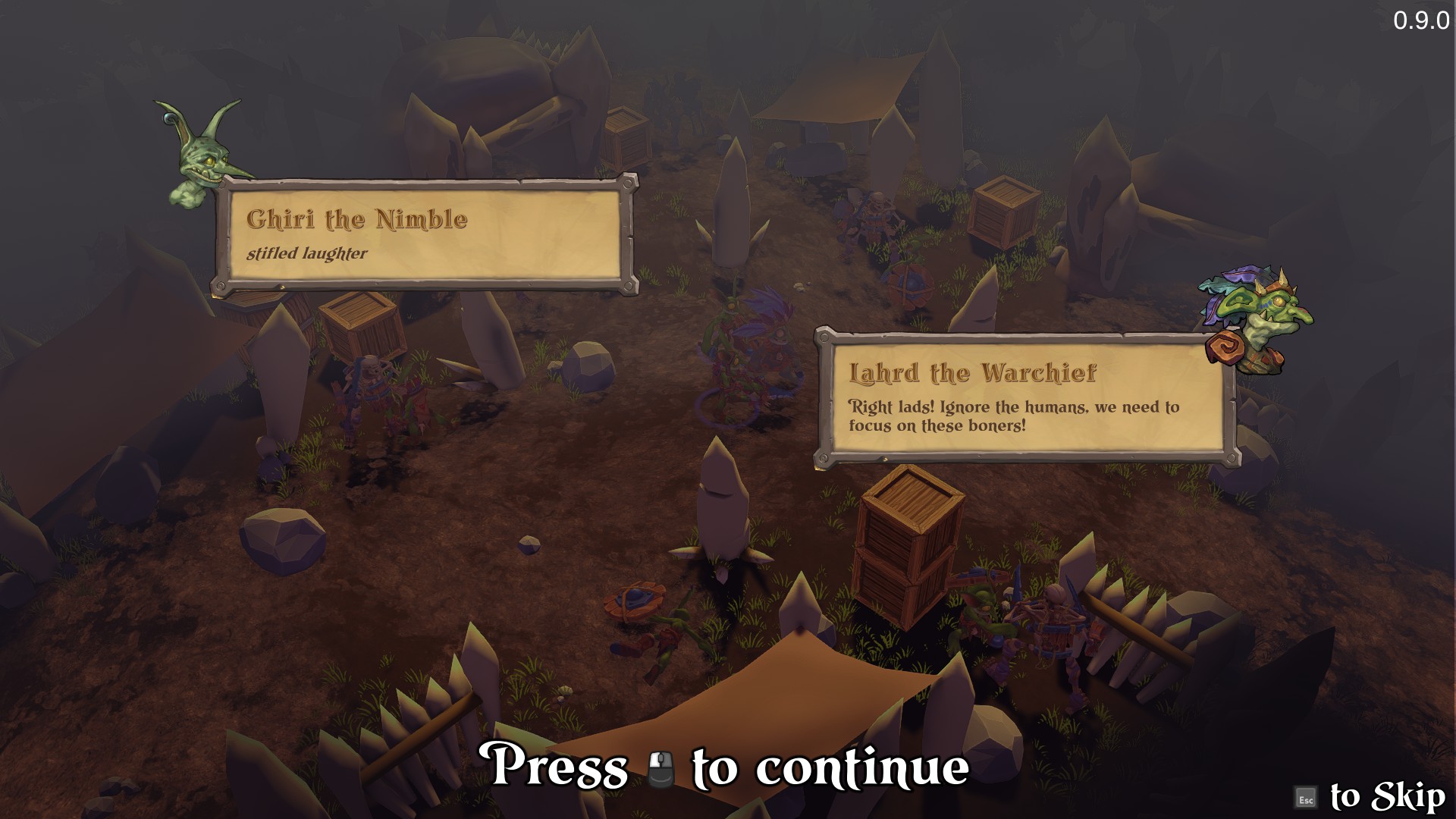 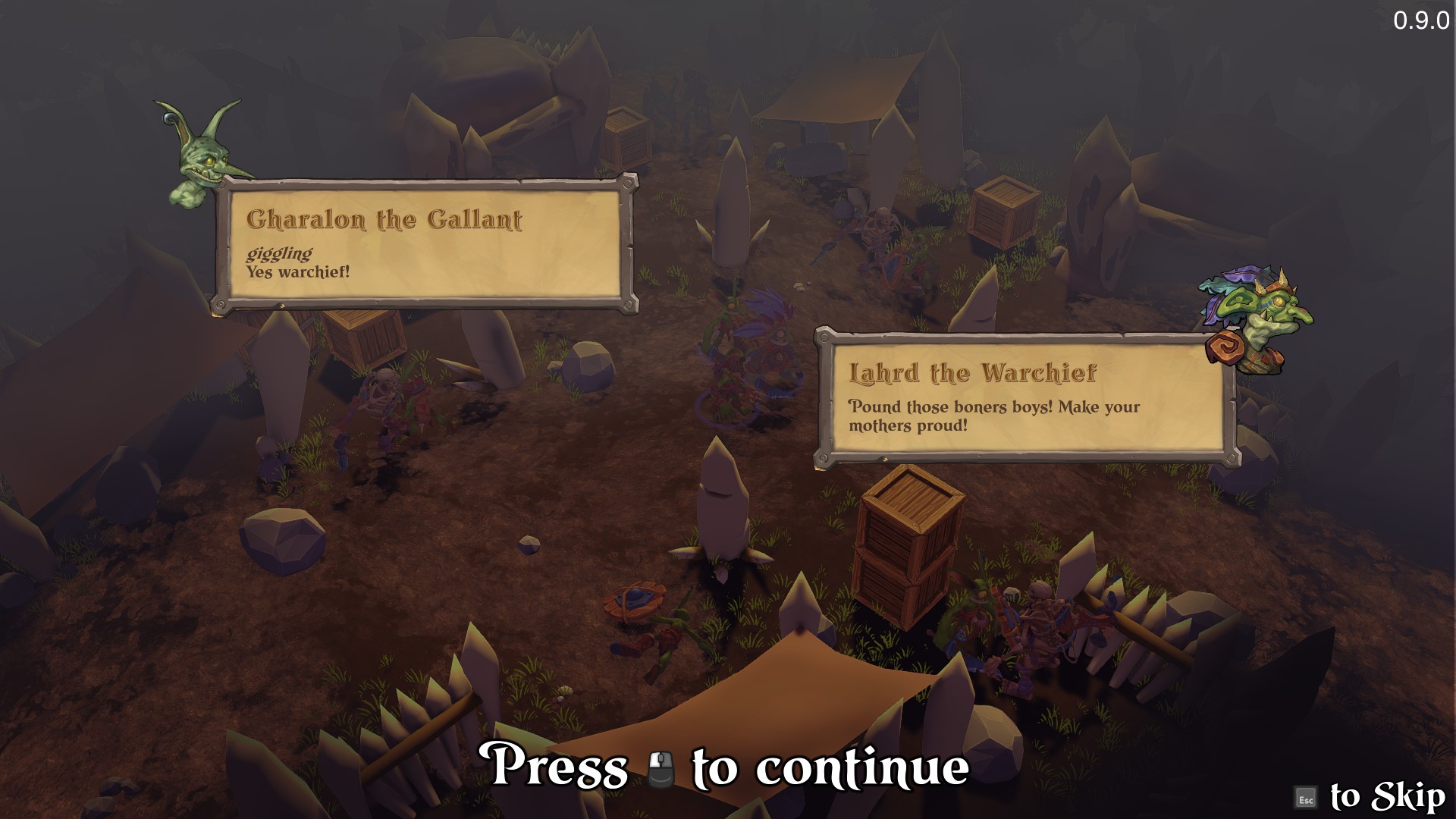 First impressions are excellent, with colourful graphics, fun characters, and exactly the right amount of humour. I really enjoyed it, in spite of RNG-induced chaos and a few mishaps. As I continued playing, however, my enthusiasm waned. The gameplay simply doesn’t evolve. My four characters remained with me to the end, making resources and factions pointless. After the first 20 or so procedurally generated battles, I gave up and headed for the main quests instead.

If the developers include a lot more variation and provide a compelling reason for the overland section, then Fort Triumph will be a fantastic game. At the moment, though it’s fun for a handful of hours, even the excellent script can’t carry it for too long before boredom sets in.