I love platformers, but it’s hard to find anything new to get excited about. Run-of-the-mill indie releases are average more-of-the-same simple platformers with crude pixel-art and levels built with tiles. I am sick of going through the motions of simple jumps and simple quests, I need something novel and fresh. And here comes Rifter with its swinging and dashing.

Rifter tells the story of a titular Rifter and its funny companion bot Tiny (and its lovely uplifting emoticons) in their attempt to destroy planets by opening several rifts around their crust. Why are they doing that? They seem programmed to, and the intrigue will gradually unveil the mystery while tackling the topic of free will. This game is not a Metroidvania or a straightforward adventure; instead, it is classically divided into small levels that can be revisited at any time. And there is a lot of content there, 90 levels providing many hours of swinging at high speed. 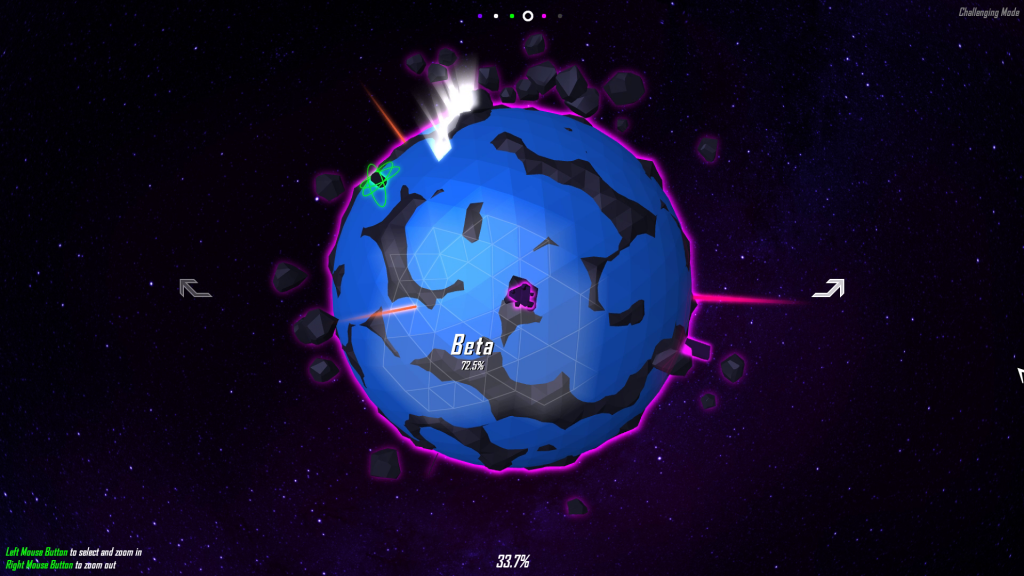 The whole game is built around the use of a grappling hook. Nodes to connect to are arbitrarily positioned in the level, and grabbing one is instant as long as the character is in range: you won’t be pestering that the rope is too slow or hard to manage. Then you can freely swing and let go as you please,using your momentum to reach the next node or aim for safe terrain to land on. The character runs very fast and can swing at high speed, which means that this game can reach an insane pace. Don’t be afraid of that though, as some actions trigger a very short slowdown of time (and not speed) just so that you can better see what is going on. And in any case, there are a lot of safe areas for you to take a break and observe what is up ahead. There are even some type of signs that let you observe what lies ahead while the ghost of another player shows you the way. 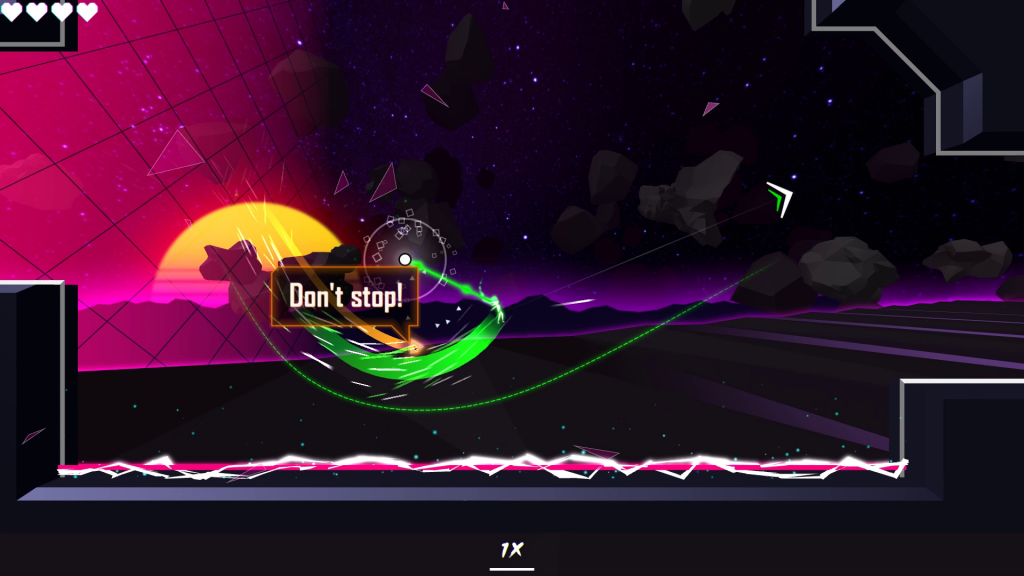 Accessibility is definitely not something the developers sneered at, as there are often faint lines to show the best trajectory to get past an obstacle, and at any time it is possible to change the difficulty in the menu. The controls can also be changed, there is absolutely nothing to complain about there. Mouse & keyboard is the suggested best way to enjoy the game (which is rare to see for a platformer, it’s usually the opposite) and I can only agree. Controllers are of course supported and work perfectly, but using the mouse to aim the grappling hook feels incredibly satisfying… 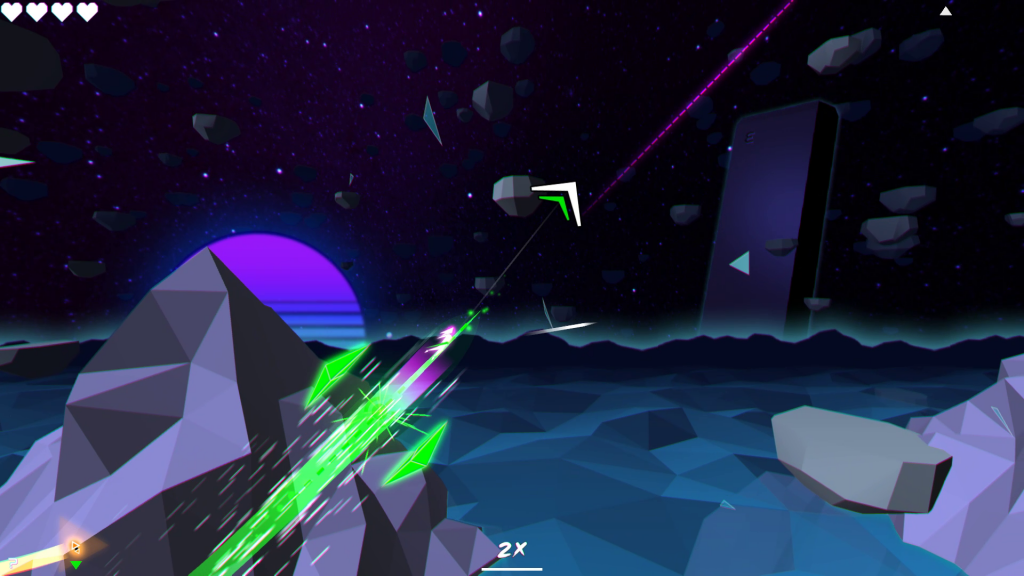 …Especially when you chain obstacles at breakneck speed, soaring through the level. As you progress, there are new things to interact with, such as an air dash or nodes that hurl you through them like a cannonball. When you take several of them in a row (think of some Donkey Kong levels under steroids), the flow is exhilarating. Rifter is one of those games that manages to soothe players in a super flow, supported with great effect by the sweet synthwave soundtrack accompanying the vaporwave neon-infused 2.5D graphics. 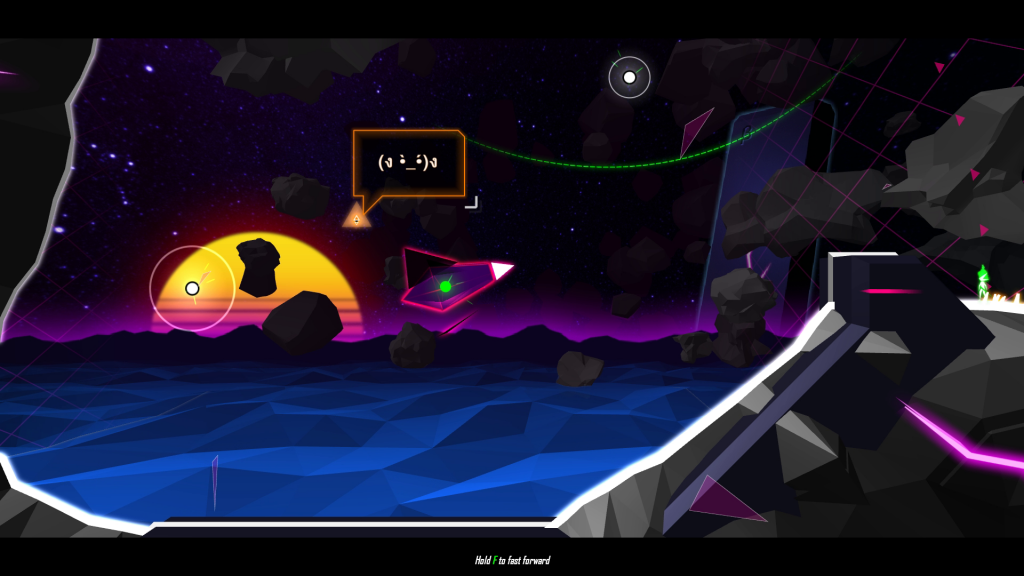 Variety is the spice of life and Rifter constantly comes up with new ways to interact with its levels including the enemies themselves. Some will require to attack from behind while others will shoot at the player and require a lateral attack. Their direction is marked by a small arrow around the character because this game is acing it in the department of helping the player read its environment. Some levels are more of an obstacle course while some feel like arenas offering a playground to slaughter a few enemies, and they are all well designed. There are boss fights too. I only didn’t care for the electric walls which can bounce the player back to certain death instead of simply costing some life points. 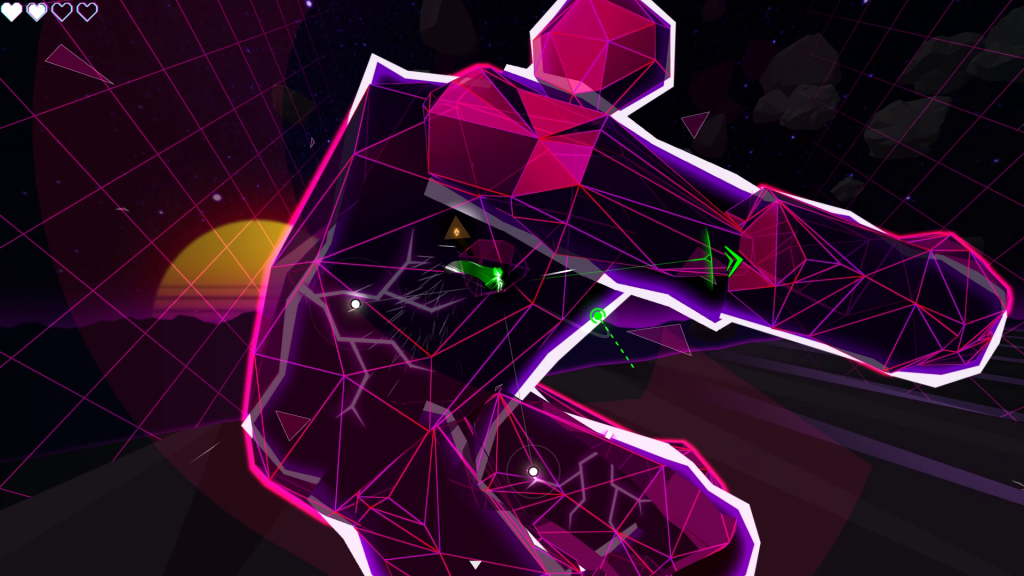 The tough life of a completionist

I mentioned earlier that new things show up as you progress, and the character can also unlock upgrades by visiting a shop. The currency is given in shards hidden in the levels, which sadly means that it’s not possible to 100% complete each level on the first run, some levels require the player to come back once they have acquired some useful upgrades. There are some special challenge levels that reward with several shards, and while the difficulty is manageable in the rest of the game, the challenge levels can appropriately be hellish. For those wanting even more challenge, there are leaderboards to compete with other players. 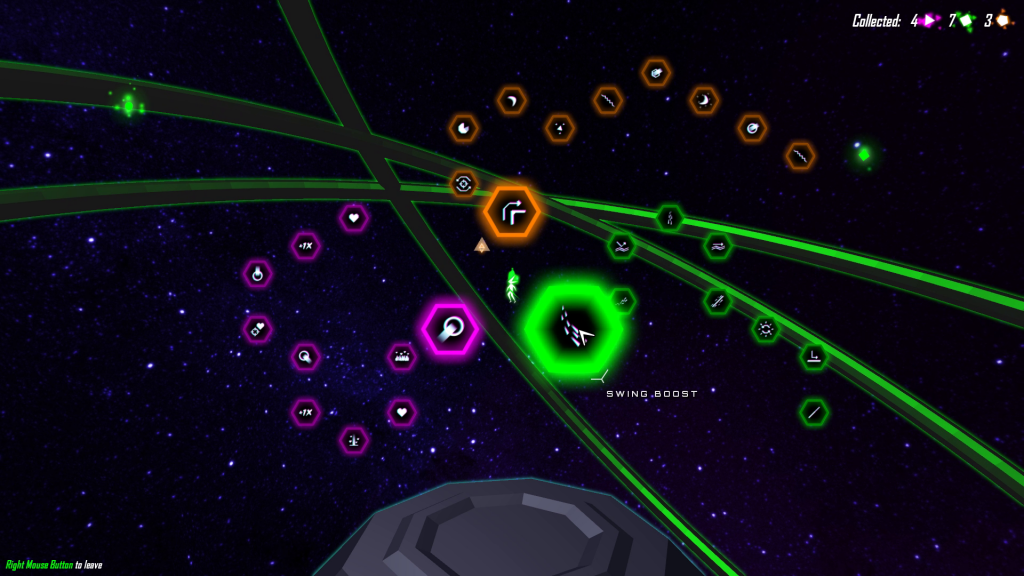 Rifter is a novel platformer based around a grappling hook to swing around or through obstacles at breakneck speed. In this hot summer, it feels very fresh with its beautiful vaporwave style. The levels are very well designed, helping players achieve that sought-after sense of flow. The game also knows how to be difficult while remaining accessible for everyone, and it will be a succulent treat for speedrunners.