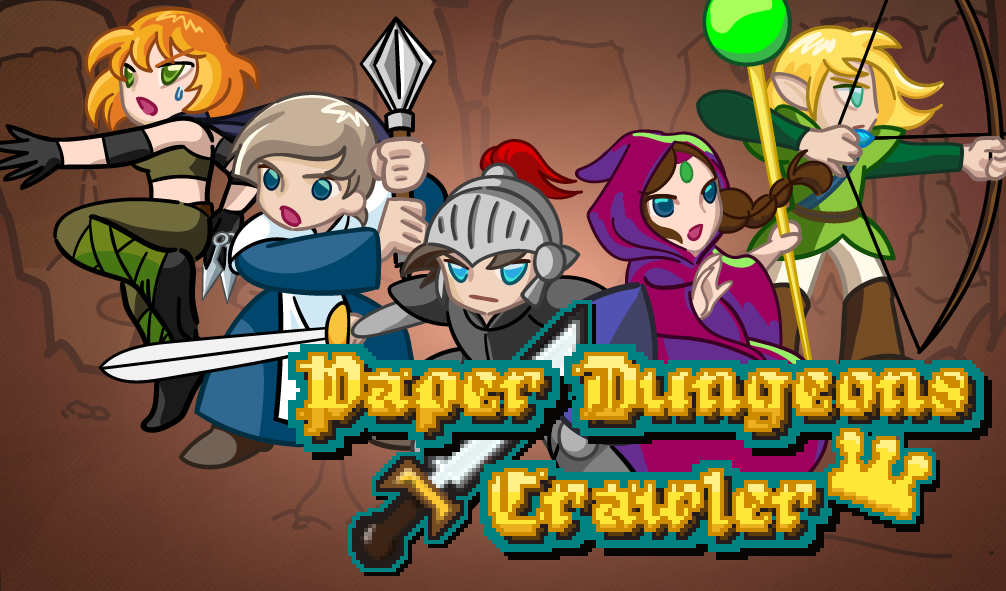 Paper Dungeons Crawler melds a new runic system into the roguelike genre, and it also offers a couple more unique systems to the mix. Let’s take a dive into Cyndaria and see what we can unearth.

Explore the mysterious Dungeons of Cyndaria and unearth an extensive lore. A plethora of creatures and magical items are waiting for you to step into ever-changing dungeons, with diverse biomes and challenges.

Defeat Dragon bosses to unleash hidden runes, and recover the sacred seeds of Cyndaria in order to restore the divine trees.

Dungeons can be unforgiving, so be sure to eat and rest when the time is proper, and use all your abilities wisely. There’s nothing stopping you from skipping bosses to rush and move to the next dungeon, but you’ll also meet true death if you don’t take your time to level up your character and abilities.

Agent Mega is a two-person development team. Stephane handles all the coding and game design, while Leslie is the graphics artist. They are currently based in Laos, of all places. Both are avid gamers and therefore they endeavor to make all their games both fun and engaging. PDC is the second game in the series. Previously they have released Paper Dungeons, a fantasy board game with online elements on numerous platforms, including Android, IOS, and Steam.

The lore behind the game is the usual high fantasy tackle. Cyndaria was once a peaceful kingdom, but now its four sacred trees, which used to protect the people, are dying, but wise sages reveal that seeds have been stored in dungeons that are spread across the realm. These have the power to grow into new sacred trees, which, if done successfully, will restore order and peace to the world. With war and plague blighting the land, you are now set with the task of finding these ancients artifacts in order to save Cyndaria.

Some dungeon crawlers rely too heavily on the procedural formula for creating levels, but they also fail to mix up the tilesets variety. This can lead to uninspired crawls through the same dungeon over and over again, which hamstrings the sense of wonder and discovery, leading to player apathy and gameplay fatigue. Just adding a few mixes in tilesets and some pre-crafted elements such as barracks or temples can do wonders. PDC achieves this and the payoff is most gratifying.

There’s plenty of different room types to explore within dungeon levels, so far I have discovered chapels, libraries, dormitories, holy baths, cells, shrines, storerooms, crypts, armories, and shops. This adds an extra element of adventure, and it also adds believable places to source new items and weapons. Hidden walls and mimic chests also contribute to the heady thirst for loot and filthy lucre.

Let’s focus on the unique aspects of this roguelike. First, there is the runic system, which harkens back to the seminal Dungeon Master on the Atari ST. Every character is given one runic ability at the start of the game, and you can choose one of four different runes which are germane to your class. This can then be used in battle by drawing the relevant symbols on the runic compass, but you can also precast these before entering into any skirmish.

The second USP is the experience levelling system. This is very much akin to the same system used in Bethesda’s multi-million selling game, Skyrim. The premise is pretty self-explanatory. The more you use a skill, rune, or weapon, the better you get at it. This corresponds to level types and percentage stat increases. You start out as a neophyte, and through practice and hard-fought battles, you steadily climb to the lofty status of Archmaster.

There’s a nice twist on the usual bestiary system found in most roguelikes, as every enemy encounter has a chance to drop a beast card. This is then added to the bestiary library, which contains all the relevant information on the foe, including spell resistances and general stats, such as health/hit points, etc. This adds a cool collectible aspect to the game, and you even get a reward for gathering all the cards in the form of a special Steam achievement.

Over the course of several playthroughs with different classes and runic options, I’d guesstimate that I’ve put 10-15 hours into the Early Access beta and Demo builds. With that said, I’ve only scratched the surface of what the game has to offer. There are stacks of content to be had, and lots of dungeoneering for the novice, right up to the hardened veteran of the genre. I’d wager that a full trip through the main campaign would take up to 20 hours or more, depending on your play style.

PDC has a unique aesthetic which reminds me of Dungeons of Dredmor. It’s an art style that I instantly felt attracted to, not overly fussy, and it has a handcrafted feel all of its own. Obviously, it’s not top tier sprite work ala Chunsoft but it’s functional and does the job. The variety of the tile work is also unique and refreshing. Standard tileset assets are ten a penny, so taking the time to create new art from scratch shows a commitment to the project, despite the limited resources. This has paid off in dividends and sets PDC apart from the usual Unity engine fodder.

Some effort has been made to make the loot both interesting and visually appealing. There are loads of custom sprites for unique items such as hats, wands, armor, and weapons. This adds to the overall handmade aesthetic and makes hunting for loot a lot more engaging. Equipping your character with all manner of gleaming swords and resplendent shields never get old.

The animation system is quite fluid when relaying battle stats. It kind of reminds me of Diablo, where you get an instant graphical feedback as to whether your strikes are doing any damage. Hit points bounce off foes, evade and whiffs text also inform the player of crucial info on skirmish strikes. Status effects such as bleed, poison and sickness points spill from your character, thus keeping you well informed on your character’s health and fitness.

The main menu theme is a tad pedestrian pseudo-acoustic guitar ditty. This is serviceable, but not memorable or outstanding. On the other hand, the individual dungeon tunes are a much better fare, particularly the Danhga Jungle (Second Biome) theme. This is an awesome piece of FM towns style mellow mood music. It fits the roguelike theme perfectly, by having a beautifully arranged soft melody that seeps into your unconsciousness whilst you explore. I’ve not heard a tune of this quality since the original Etrian Odyssey soundtrack.

Spot FX design is well crafted and well sourced. I say well sourced as the tonal flair is of good quality. I’ve not heard the various spell samples and foley work in other games. Now, whether these are off the peg open source libraries or newly recorded found sounds is open for debate. What I can say is that they do the trick and fit perfectly into the overall aesthetic. I particularly like the rainstorm FX, it is not a short fire and forget loop, it must be over 30 seconds or more in length, and it’s highly detailed and adds a greater depth to the soundscape.

As with every early access game, there are a few bumps in the road. The inventory system doesn’t have any sort of features, nor can you swap item places by using the drag and drop method. The curse system is a tad obtuse, as you can only uncurse items that you have already equipped, so having the ability to choose would be beneficial and most welcome.

The zoom map function is great but has a locked focus on your character. Having the option to freely scroll around the discovered area would aid in backtracking, and it would also allow you to see items that you may have missed in the throng of battle. The ability to auto-explore and go to stairs would also be good quality of life features.

I also entered one show-stopping bug in the demo. When trading with the shopkeeper, the whole bottom GUI disappears, which prevents you from saving your game, as there is no keyboard shortcut for the menu system. There are also a few typos and minor scripting issues with the leveling up system, but these are small non-critical complaints which can easier be resolved with a small update.

There are enough new ideas and spins on the classic roguelike gameplay to keep PDC both interesting and challenging. The number of permutations involving basic class types, runes, specializations, and talents is vast. The experience system also rewards the player by making your weapon of choice more powerful the more you use it. The unique art style also sets the game apart from the rest of the crowd. In the end, PDC adds to the ever-growing library of quality classic roguelikes on the PC. It’s a solid game which will only get better in time.

But don’t take my word for it. Why not try out the free demo available at itch.io. This lets you run through the entirety of the first biome and big boss encounter. All the classes are unlocked, with all the various runes, specializations, and talents available from the get-go. There’s a fair chunk of gameplay to be had, there are no time restrictions, and there are six save slots, so you can peruse all the different character options and game styles at your leisure.