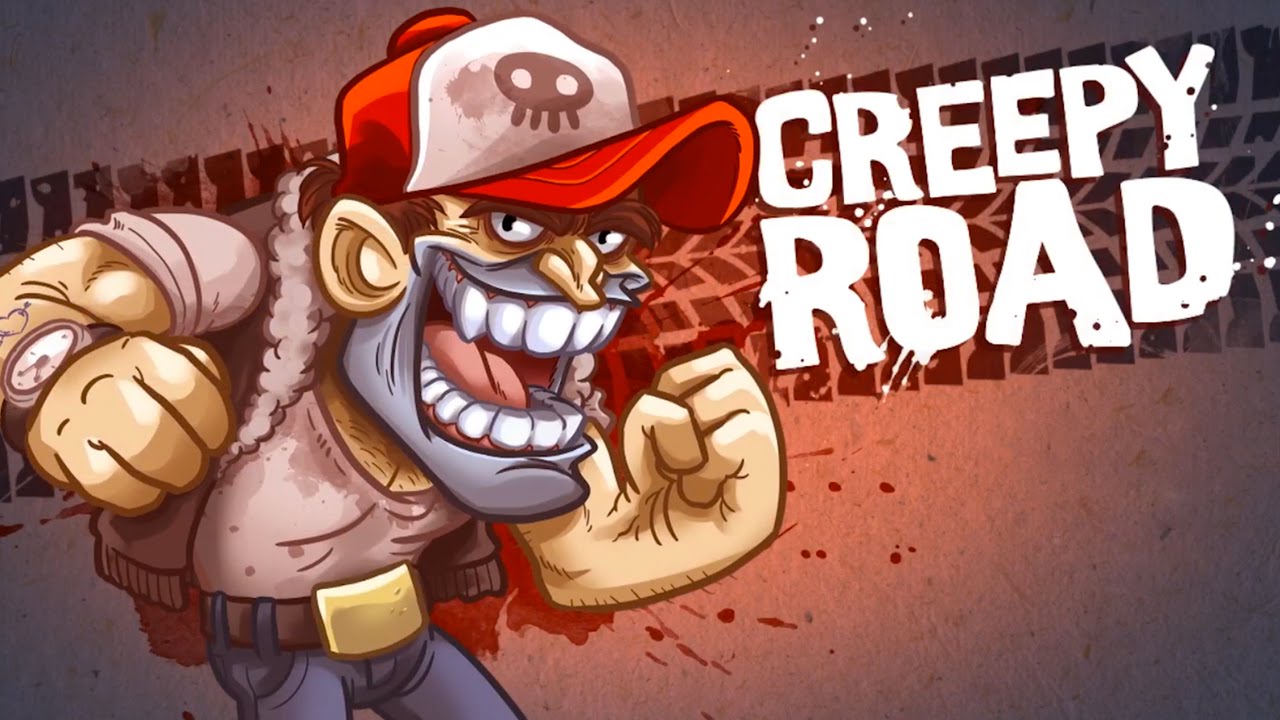 Creepy Road is a wacky run and gun with spectacular cartoonish graphics.

Ever since I fell in love with the Metal Slug series, I am always up for more run and gun games. The concept seems rather simple: side scrolling and a large number of enemies to shoot. Easy, right? There should be a ton of games doing this right. Well, actually, it turns out that even such a simple concept requires a lot of subtle fine-tuning to hit the right notes. Think of it like this, there are many games that have attempted to be Doom, but none succeeded despite the seemingly simple premise.

Creepy Road is a new entry to the run and gun family, and what an entrance. Raving rabbits, drop pandas, killer clowns with a hilarious voice, shotgun-wielding rednecks, machine-gun cows, it’s all bonkers and richly animated in a beautiful cartoonish style. The levels themselves are pretty with lots of details such as planes falling off the skies. The icing on the cake: it runs smoothly. This game is definitively a looker.

There is a story behind this madness, a koala poisoned the whole area and our hero Flint has to take up arms to find his girlfriend. It’s nothing that will keep you on the edge of your seat, but it allows players to encounter this insane variety of enemies while taking us from the countryside to the city. 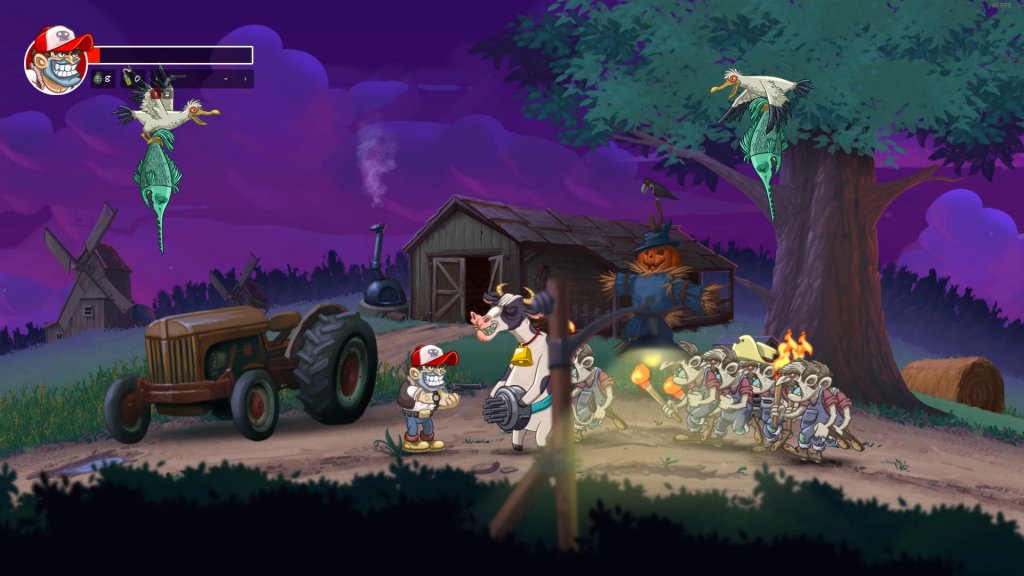 A key component of a successful run and gun game is variety. Doing the same action over and over gets dull. Here, the enemies provide a great amount of variety as they all have different kinds of attacks and sometimes from a different angle. The levels occasionally add verticality so it’s not just a horizontal romp, and for once there is an actually good sewer level. 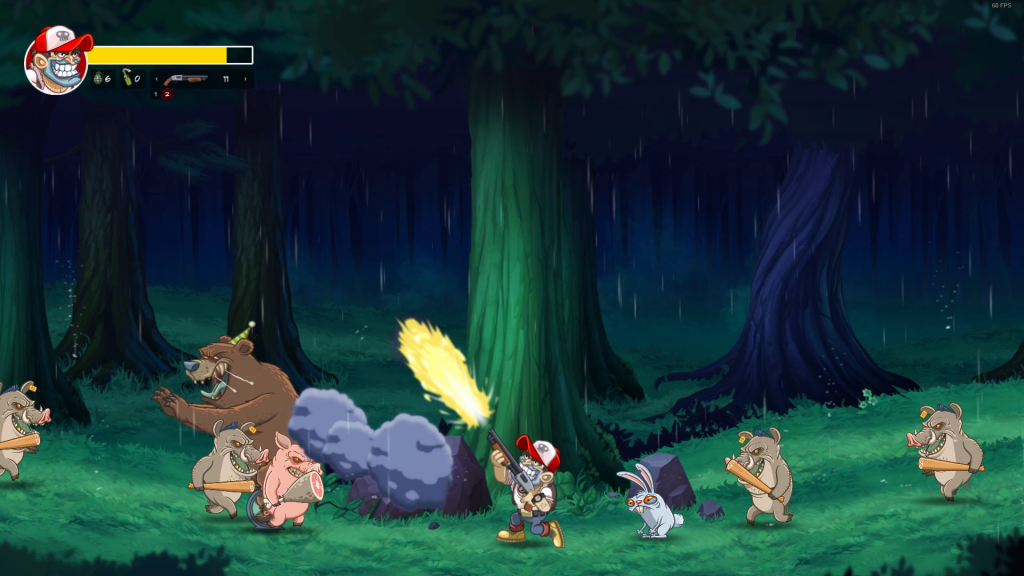 But then, we have the weapons. In terms of variety, we are covered. There are grenades and Molotov cocktails, shotguns and rifles, bazookas and flamethrowers, and a few wackier weapons like a laser pistol that transforms its victims into turds. It seems good on paper, but in combat situations, they hurt the game rather than enhance it. First, most of the weapons feel and behave like a shotgun, including the flamethrower that does not fire continuously or the bazooka that has little area damage and does not hurt the player. Only the AK47 feels like it handles much differently on top of being excellent at clearing many targets, whatever the distance. Even if the weapons have some minor differences, it’s actually difficult to quickly switch between appropriate tools for the task. Due to this, the fights become clumsy as it’s more of a struggle to cycle between weapons rather than a smooth rampage. 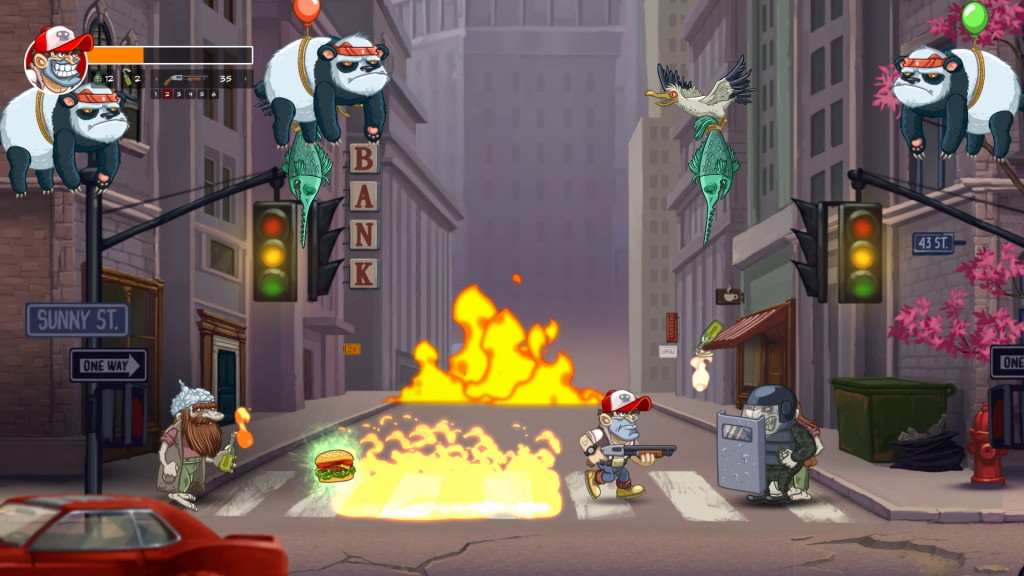 The keyboard controls are unpleasant, and it’s not possible to rebind them. Arrow keys to move, space to jump, numbers to change weapons and Z to shoot. It’s just awkward, I would have preferred to use WASD to move and the mouse to shoot, but it’s not possible to rebind keys. On a controller, it feels more natural, except for the lack of a weapons wheel. I would still have preferred to use the bumpers to shoot rather than X, but that’s a minor complaint. 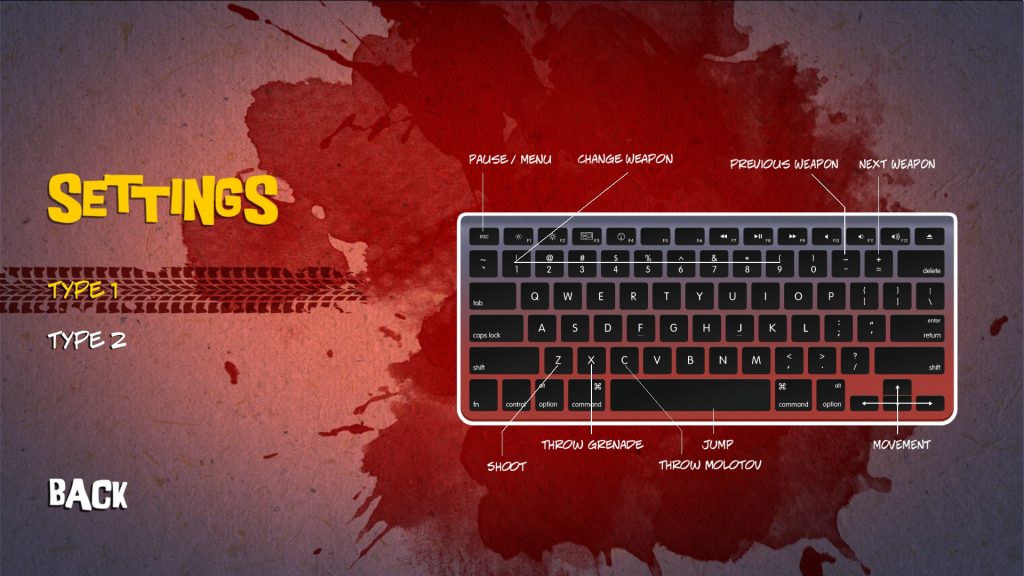 There should have been a weapons wheel like in the Guns, Gore & Cannoli series, or a single weapon equipped like in Metal Slug. Weapon pick-ups are very annoying in Creepy Road, as the character automatically switches on pick-up, and sometimes you end up with a minigun that only shoots horizontally while a wave of aerial enemies is on top of you. Metal Slug manages to always give the right tool for the job, and it also allows the level designers to create specific fights that always feel different from the previous one. Creepy Road just haphazardly throws enemies and weapons at the player without really distinguishing a sequence from the next. And this is where everything falls apart as everything feels too much of the same.

The movements have a little element of “just not right” especially when it comes to climbing. Enemies die in a puff of smoke rather than with blood and gore. Added to the weapons switching struggle and lack of variety from encounter to encounter, the game does not feel satisfying despite its fantastic graphics. 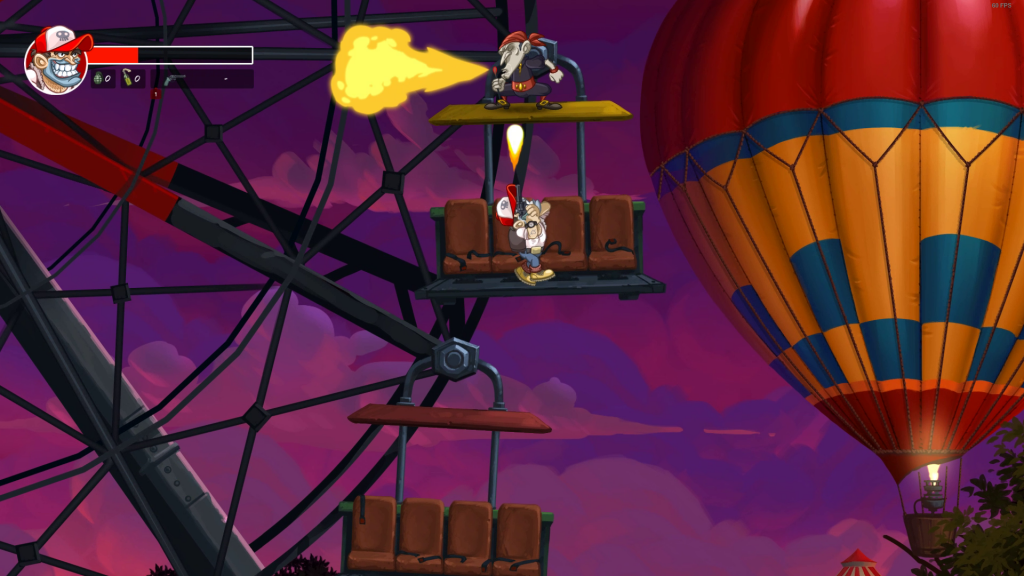 The boss fights are far from perfect, but they are interesting with only a specific moment when the boss is vulnerable. What I will comment however are the shoot ‘em up sequences. Riding a missile, Flint has to navigate the sky while shooting down elephants. It sounds hilarious and awesome, but to me, this sequence was the final nail in the coffin. There are lots of moments when nothing happens and the scrolling is excruciatingly slow. And then I died only to have to start over the level and wait again. I just couldn’t take it anymore. 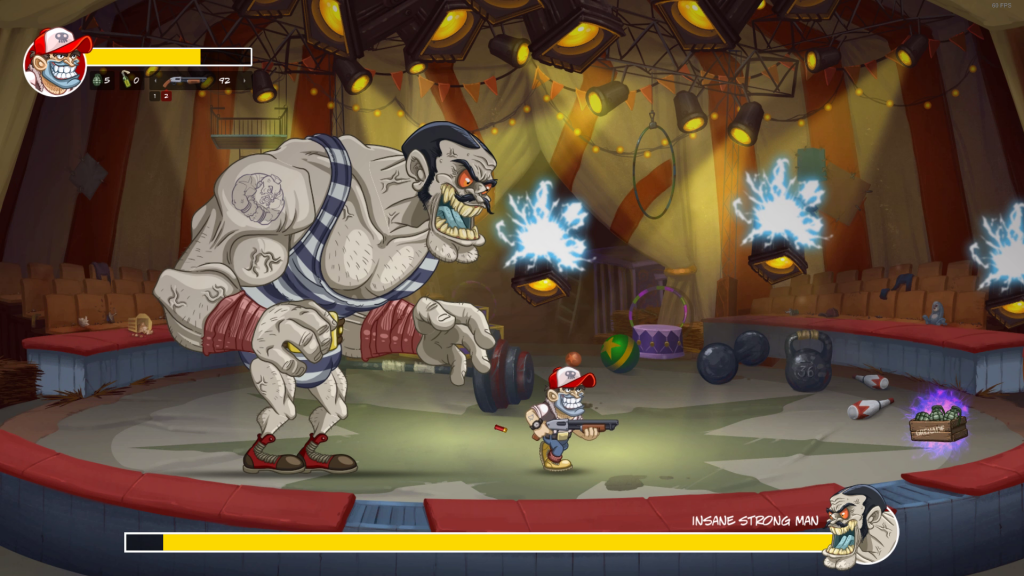 It can sometimes be frustrating to have to go back to the beginning of a level due to the rarity of checkpoints, but overall the difficulty is manageable. Upon dying it rarely feels like the game was unfair, however it feels annoying to have to slowly play it through again. Thankfully, there are lots of health pick-ups to prevent this from happening too often. 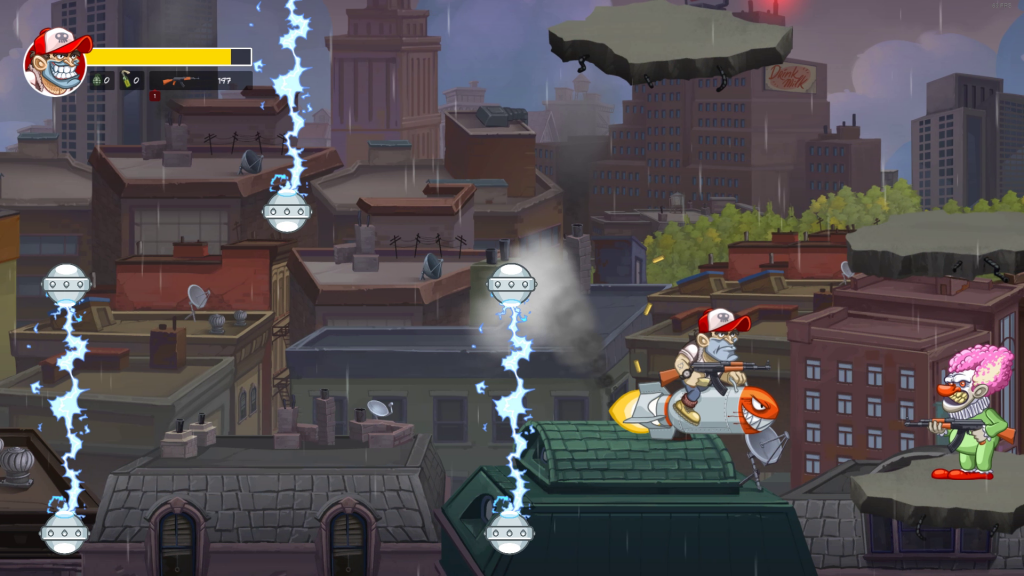 Creepy Road is a gorgeous run and gun with a great premise that allows for a few hours of funny insanity, but when it comes to the nitty-gritty it’s not satisfying enough to claim the spotlight. Now that the developers have proven that their artists are up to the task, I recommend that they digest Metal Slug some more to approach enemy encounters and level design under a new light. As it stands, it’s alright but not exceptional.