Rethink | Evolved 2 is the third part in this laser-based puzzle game. The devs have listened closely to the feedback from the players and the puzzles have grown even more complex.

This is now the third part of the Rethink series, with the first one released a bit over a year ago. The developer has been busy, listening and taking in feedback from the players to implement some new mechanics and create more complex puzzles that at first seem daunting, yet in the end are logically straightforward and even completely easy at times. By this I mean that no other puzzle game has made me feel stupid after some of it’s puzzles. I had a few of those moments where I was seriously asking myself how I could not see that right away.

The setting is still the same environment as two previous installments, that prison-turned-into-testing-grounds facility with it’s smooth white walls and cubes that redirect lasers. The plot is told by various informative boards scattered between every few levels.  The previous two installments didn’t feature much plot at all and there isn’t much of a plot in this new installment either compared to before, but the history of the facility is nice to review.  Players who haven’t played the previous parts get a glimpse of the original puzzles and how they have evolved. I personally liked these.  Maybe it’s the nostalgia, but seeing the jumping puzzles with cubes on the wall from the first game made me remember how much fun I had  back in the day. 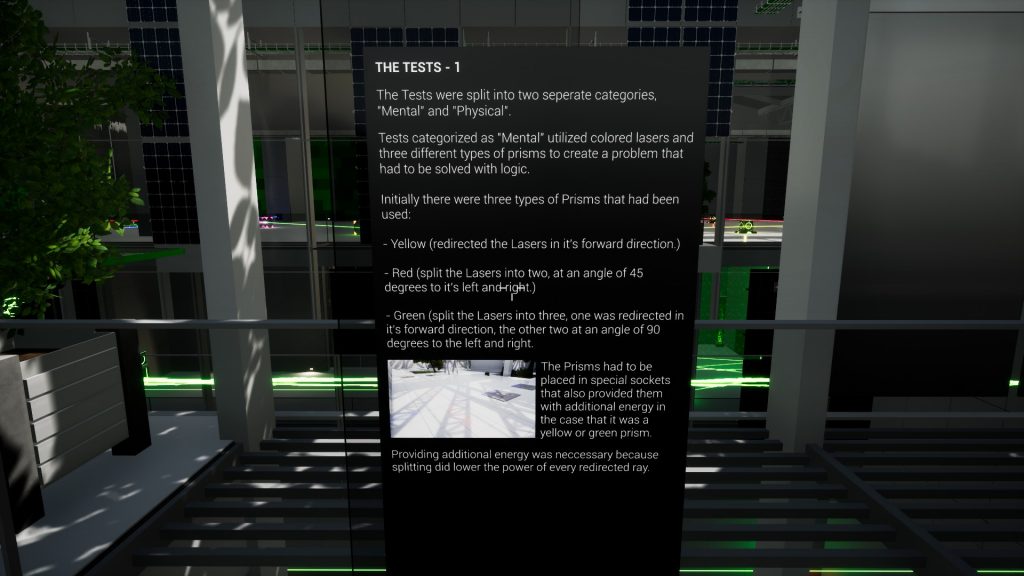 Motivated by this, I re-visited the previous games. It’s been a little over a year since the first one was released (yes, just about a year, and we already have three of these!) and it has come a long way. There are no more tutorial levels that feel like unnecessary fillers, breaking the flow. The total number of puzzles is “just” 40, but they’re more complex than before. At times these even span multiple rooms when before it was just a one per room. This caught me off guard the first time i encountered it.

Starting out, I thought there was something strange about placing a mirror (that reflects the beam, more on this later) next to the door that starts the level, but I soon forgot it when I began to ponder the puzzle that I was presented with.  No matter what i tried, I couldn’t figure it out, I was always missing one beam. Then I wandered around the room and saw the mirror, went back to the previous puzzle, solved it AGAIN in a different way so that I got the beam directed correctly this time. Eventually, that same beam ended up being a crucial puzzle piece of three consecutive rooms.

Well played, sir, well played! Or as we say in Finland, hyvää settiä! And those two words aren’t earned easily.

The controls are mostly as smooth as the second game with one big addition. rolling the mouse wheel turns the cube just a bit. It was the biggest flaw in the previous game when I think about the control scheme. Sometimes placing a cube forced me to bump into another and then that one was at the wrong place. Positioning cubes in the correct position is a puzzle of its own at times. Even though the game now has some fine tuning, it’s not without mercy. The areas, or goals, that the laser must touch are numerous, yet it never becomes too frustrating where you have to be right at the exact spot to get it right.

The mirrors are also pretty generous, offering a generous amount of space to reflect from and there are no tight spaces to guide the laser through with the mirrors even if the puzzle occasionally require 3-4 reflections before hitting the spot. I’ve played other puzzle games that require more pinpointing than actual thought, and I didn’t encounter anything like that in here. Granted, I haven’t finished all the levels quite yet at the time of this writing. I base my presumptions on the fact that I’ve played both of the previous games and most of this one.  It still fits well in the overall spirit of this series. The game provides a good challenge without resorting to any cheap tricks.

The series have really changed since the first iteration. That first game was released only a about a year ago and featured some nice ideas and puzzles. but wasn’t a completely solid experience, especially with the flow-breaking tutorial levels for a new mechanic that appeared suddenly after a few hard levels. The core idea is still the same, just greatly refined and polished. The developer listened closely to feedback from the players and every new game has evolved the way players have wished for with more clever and misdirecting puzzles.

The game has a soothing soundtrack that is a complete opposite to the game’s atmosphere, it helped with the frustration I sometimes felt with the puzzles and the information boards telling the facility’s history make the world feel more alive. What’s there not to like?

This is one of those series that should be in every game collectors virtual library. It’s not anything groundbreaking, but it has it’s own charm, offers challenging puzzles and has a nicely crafted world that’s enjoyable to explore.