Catmaze is one of those games that seems that it isn’t getting the attention that it deserves, even though it’s a bit rough around the edges.

Unless I’m mistaken, this is the first Metroidvania that draws heavy inspiration from Slavic mythology, and if you’re familiar with this culture, you’ll most likely recognize some of the deities that are present in the game, along with a few other references. Besides that, unfortunately, the game doesn’t really bring anything new to the table, but thankfully it does what it does rather well, at least for the most part.

The player is put in the shoes of Alesta, a teenage witch that finds her life turned upside down after a rather unfortunate event fairly early in the game. Throughout the game, you’ll explore the world trying to help her accomplish something that initially was thought impossible, and this is clearly visible as you find yourself going back and forward like in most Metroidvanias, as you gather upgrades and new abilities that let you access previously inaccessible areas. 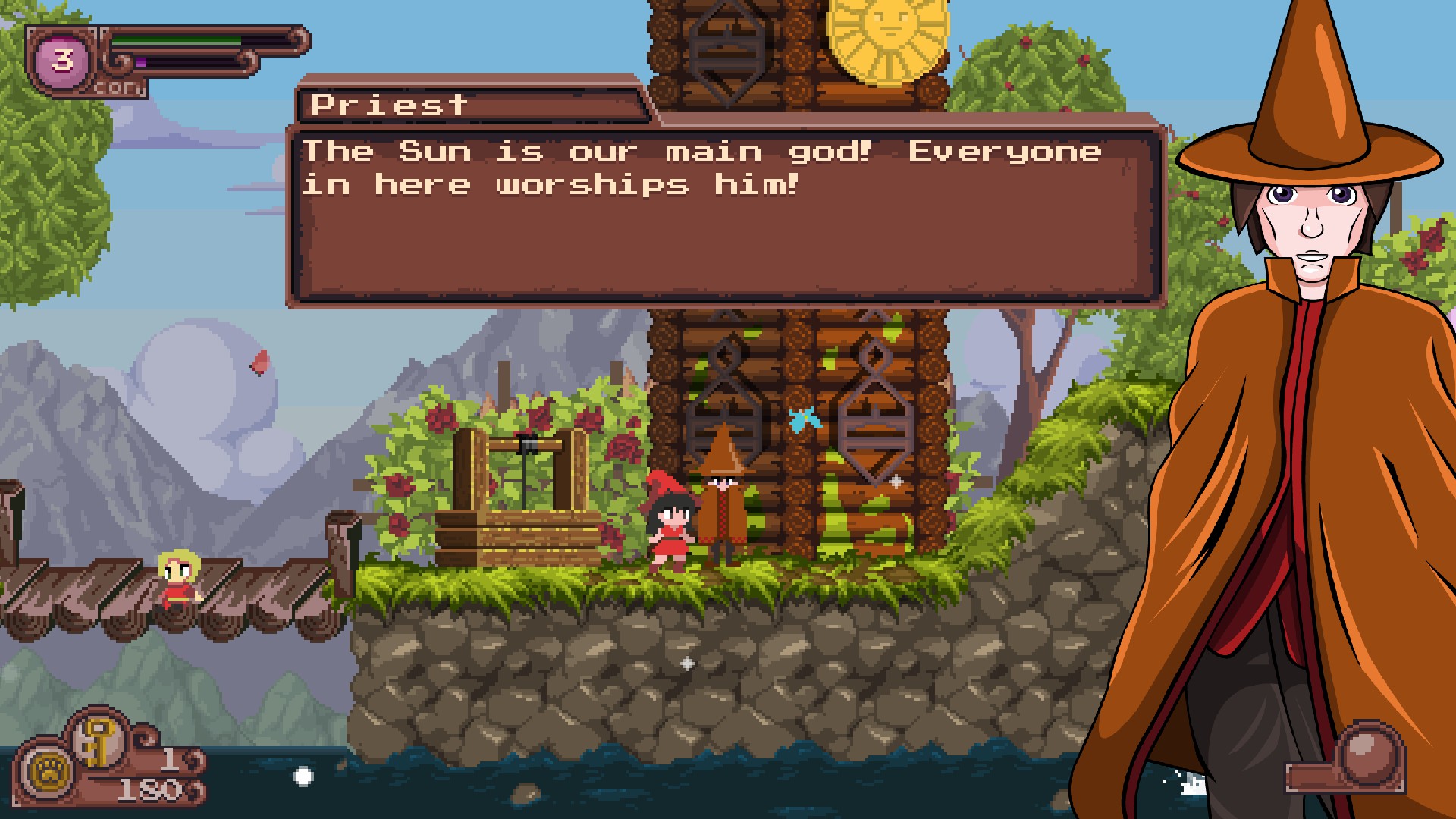 I wouldn’t say that the game’s story, nor its characters, are its biggest strengths, but I found them to be decent enough that it made me curious as to what I’d come across next. With that said, there is no voice acting, everything is told through text dialogue and through Alesta’s journal, where she keeps track of what’s going on with other people, and what she should be doing next. In a way, this pretty much acts like a quest journal that you could find in some RPGs, but it also brings up a considerable issue that I have with the game.

Like any other Metroidvania, you’ll find yourself backtracking a lot, not only when you acquire new abilities such as the double jump, but also because the game will often force you to go back to places that you’ve completed just because you have to. With that in mind, the world map doesn’t differentiate different biomes, everything looks the same on the map. While initially this doesn’t really pose a big problem, later on, once you’ve discovered most of the map, it can get rather tricky to track down places that you want to go, especially since the game also doesn’t mark interesting spots where you’ve left an unopened chest or places that you couldn’t access. Still, the game does mark quest locations, checkpoints, and places where you can fast-travel, on the map, so at least you won’t have trouble finding those. 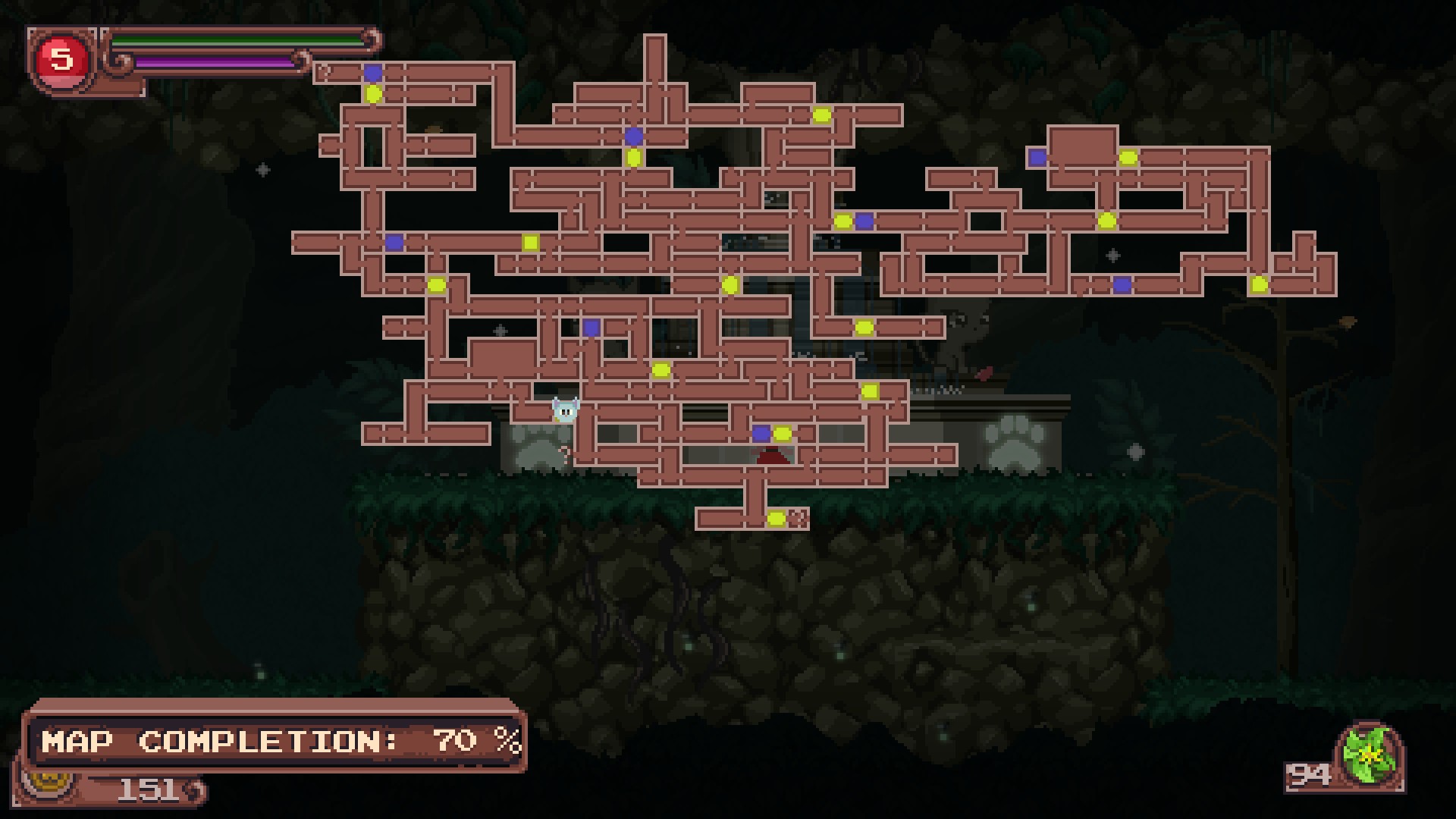 As far as the level design goes, I found it to be both challenging and easy to progress through, as the game is paced rather nicely and you won’t find any obnoxious areas that will make you want to tear your hair out. Along with that, one of the biggest parts of Catmaze is the combat, which keeps adding more variety the longer you play, unlocking new skills. Alesta can equip, at all times, a different basic attack type, a special ability that uses mana, a consumable item, and an amulet that can boost one of her stats. Throughout the game, you’ll keep finding different types of these categories that will allow you to progress even further in the game, but I found that the game kind of shoots itself in the foot here.

While there certainly is variety in terms of combat, I found that the best abilities and attacks would always be the ones that I most recently acquired. It would’ve been nice if you came across situations where you had to switch back and forth depending on the level layout and enemy type, but that, unfortunately, isn’t the case. Once I acquired a new item, I’d pretty much just stick to it until I found the next one. In a way, I guess that this could just be interpreted as a linear progression system, but I’d rather take diversity in this particular case. 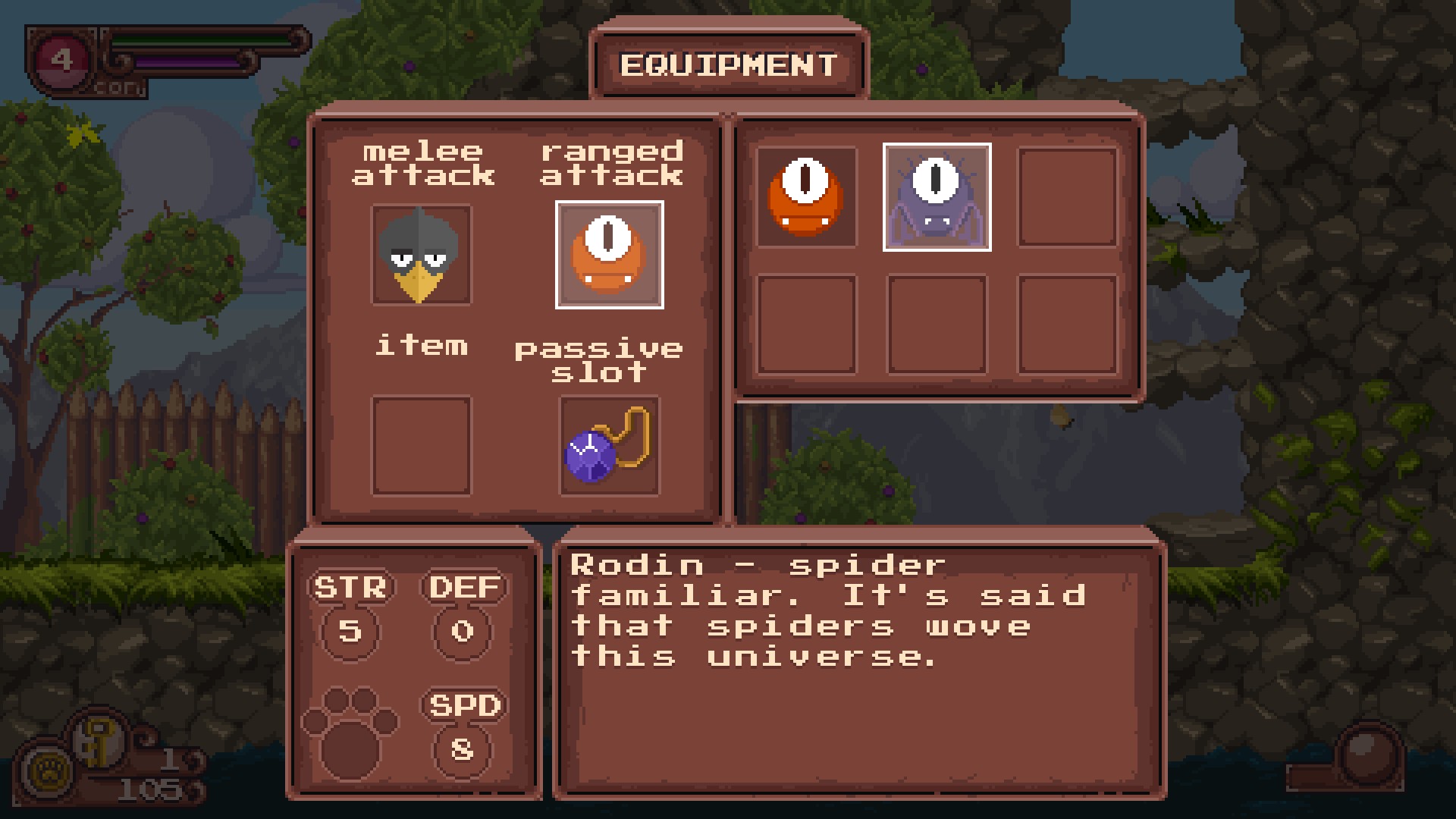 Since we’re on the subject of variety, I must say that I was very glad when I kept seeing new enemy types showing up every time I went into a new area, and I’m not talking about mere re-skins here. The vast majority of enemies rely on ranged attacks to hit you, so what tends to change is how big these projectiles are, how they travel, and how they behave. Some are temporary beams, others keep going in a straight line, while others are fired in an arc and keep falling until they hit something. There’s nothing that I found particularly innovative or anything like that, but the bosses are a pretty nice addition to the roster of enemies that you’ll have to face along your journey.

With that out of the way, if there was something that really kept me changing my opinion back and forth, it was certainly the movement system. Initially, as a whole, moving around took me a while to get used to. It felt really stiff, and I imagine this will only aggravate someone if they are used to playing other metroidvanias that are mostly fast-paced. The jumping in the game feels really floaty, but part of me thinks that might have something to do with the fact that the longer you hold the jump button the higher you’ll jump. Still, there were two unique segments of the game where the controls felt absolutely atrocious. The first one involved flying around with a broom, which kept moving at all times, you could only change the direction it was moving, but the way that this was done is really weird and hard to put into words. As for the second one, you find yourself riding some sort of wolf-like creature where you have to keep jumping from wall to wall as you try to climb up on the level, all while avoiding incoming projectiles. Nonetheless, besides these moments, everything else feels pretty responsive. 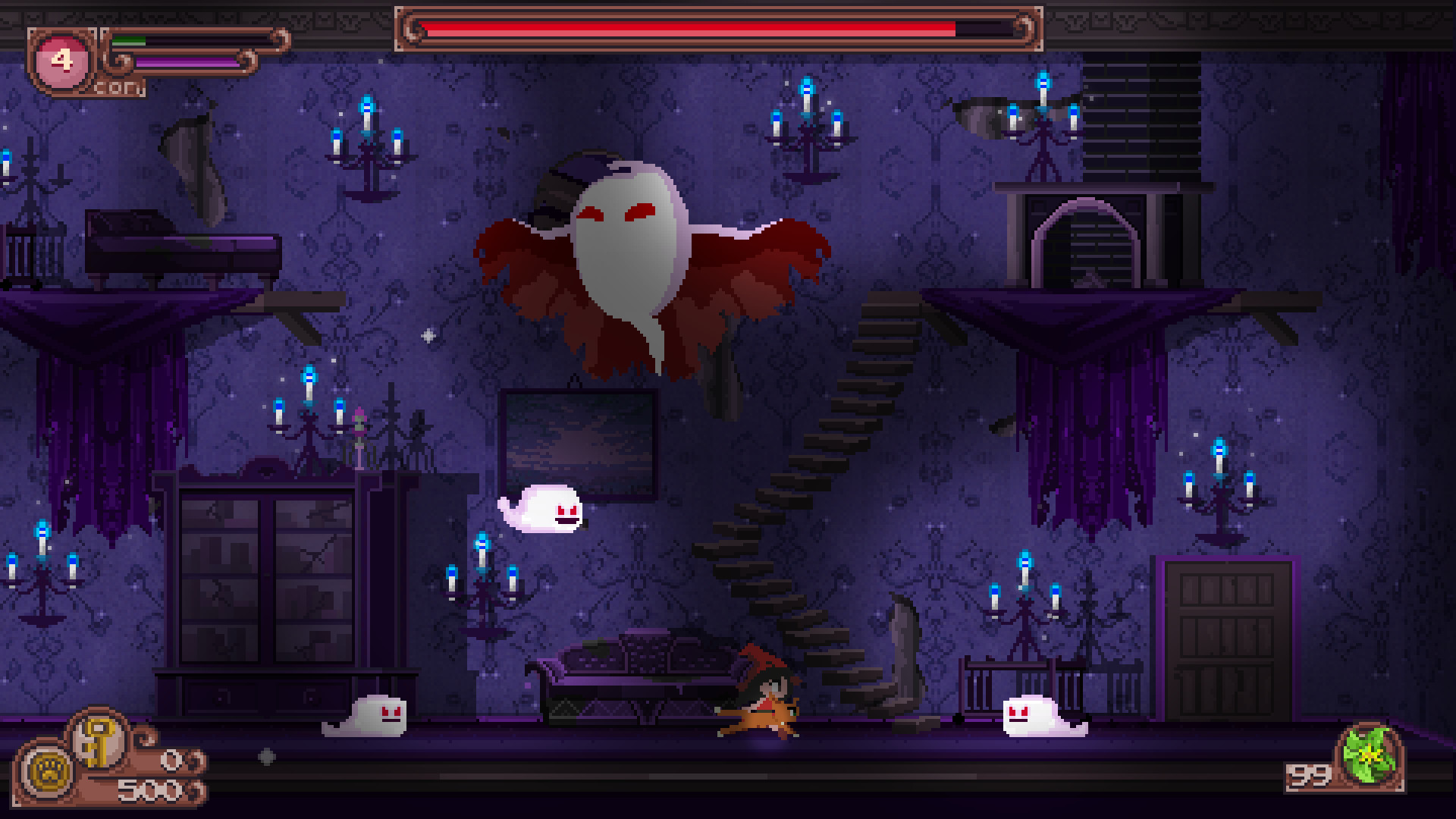 Now, these are not the only problems that the game seems to have, as I can’t for the life of me figure out how the game can run so poorly sometimes. I tend to nitpick a lot in regards to the performance of a lot of games, but in this case, the game can drop from way above 100 frames per second to as low as 30 in a single heartbeat. However, this only seems to happen when there are a lot of things on the screen, but still, I can’t imagine that this game should be this demanding in terms of hardware. The game also has a couple of puzzles that, ideally, would be a pretty neat addition to the game, but unfortunately they fail to introduce anything too substantial and seem to only be there to waste your time.

At the end of the day, Catmaze has its problems, and it’s by no means a groundbreaking entry to the genre, but, for the vast majority of it, what it does is done reasonably well. If you think that you can stand the setbacks that this game has, and as long as you’re not expecting anything special, you’ll surely have a pretty decent time with it and it will most likely keep you entertained for about 15 hours, give or take, which is not too shabby given its price.