Dear genie, I wish for a game that mixes up Indiana Jones with Dark Messiah.

This is not Aladdin

The game development studio Uppercut Games was founded by Irrational Games veterans, some of the folks behind Bioshock, SWAT 4 and Tribes: Vengeance. More recently, they made Submerged and another third person game. City of Brass means that they are back to their FPS roots, and this time it’s a single-player roguelite FPS.

We are projected into an Arabian Nights theme, in a middle-eastern city from legends. This city was cursed and its denizens are now skeletons, genies and other sorts of djinns. The player is probably there to steal the city’s gold, but it’s not possible to get out of there without lifting the curse, after quite a few levels and boss fights. 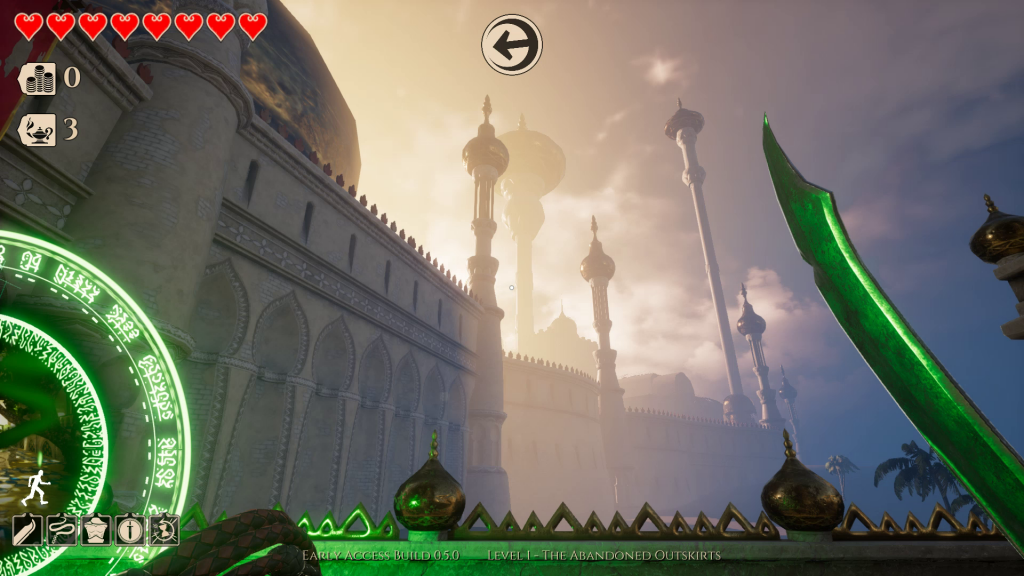 The main originality of City of Brass is one of its base weapons next to the saber: a whip. The saber can be used with the left button of the mouse, the whip with the right button, and there is an alternate function on Q that I moved to the middle mouse button. This alternate function allows swinging an enemy closer to you. This can be used to bring them in from out of reach and finish it off with the saber, or it can be used to pull an enemy towards a trap. The main function of the whip is to stun an enemy with a headshot or make it fall by aiming at the legs. There are big fat icons that show this, I did not find how to deactivate them. Finally, the whip allows picking up items in the distance or swinging from rings just like Spiderman or Indiana Jones. It’s very well done and truly feels like a natural extension of the player’s body. 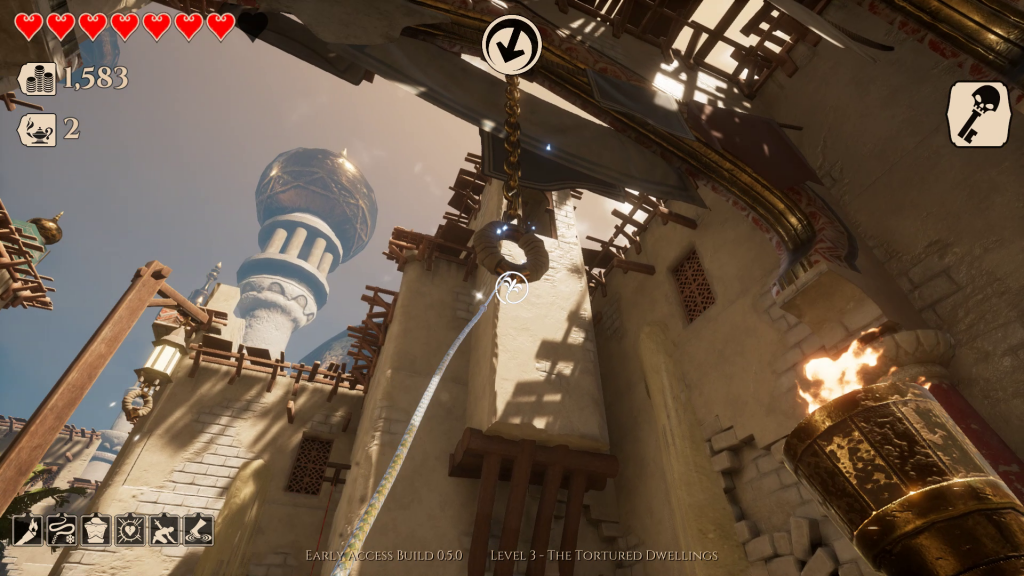 There is a little bit of parkour that is possible, with the whip or platforms, but it’s limited to a few treasure chests to find on the side and it’s never a requirement. However, the whip adds a lot of class and dynamism to the fights, and it’s the killer feature that should attract players to the game. It really feels like Indiana Jones, between the whip, the atmosphere, the treasures, the traps. I am not hiding the fact that I love traps. By the way, if a girl has the desire to hit on me, bonus points if she puts a beartrap on my seat or a circular saw in my socks. 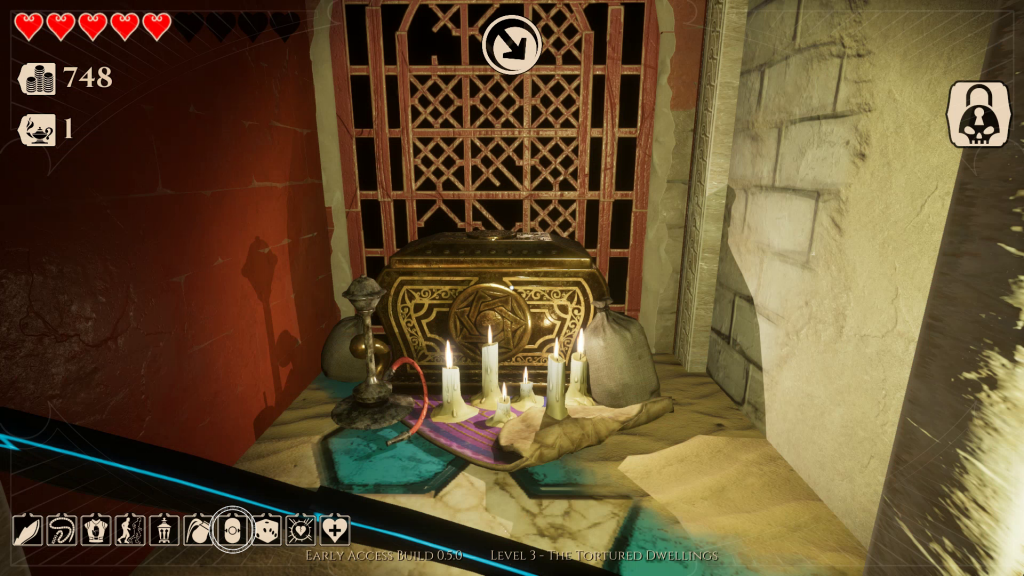 What’s a little annoying is that the whip is awesome but the saber is not. It’s just one type of attack, and it’s severely lacking something cool such as charged attacks, impaling, circle attacks or even a parry. We are far from Shadow Warrior or Dark Messiah, which is a shame because Dark Messiah was the closest experience that came to my mind, with the traps and all. 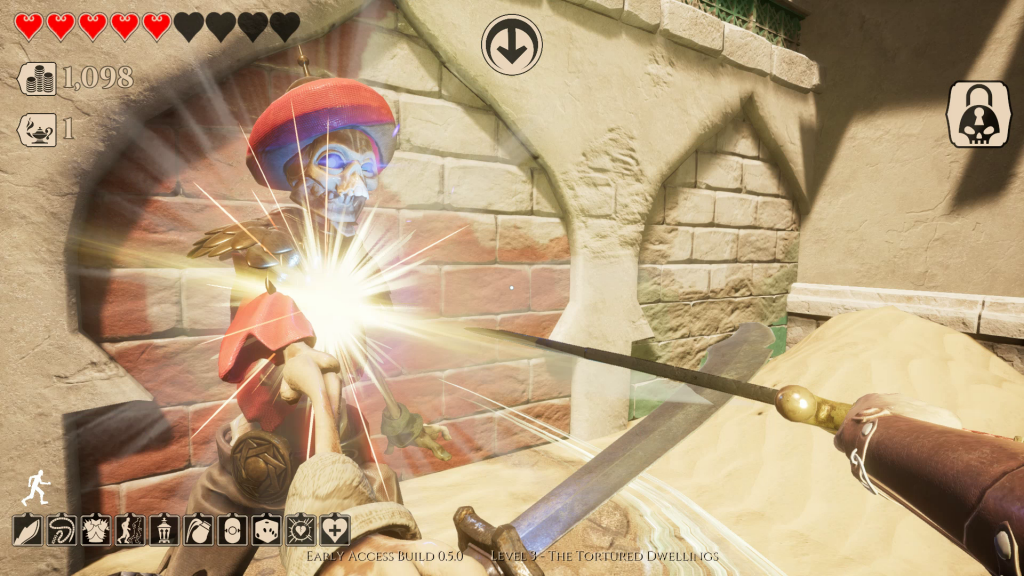 You can trip enemies towards pits or impale them on spikes, there are firepits to explode when the enemies are near, but more importantly there are a ton of items to pick up (by hand or with the whip) to burn, stun, or explode. Even if the swordfights are not very nerve-wracking, the game balances it out with all the tactical possibilities and it’s exhilarating. But beware, I must insist, if you came here to make skewers or kebab with your enemies, you will be disappointed. They are skeletons, you won’t find any meat. But if you like to use the environment, you will have fun to your heart’s content. 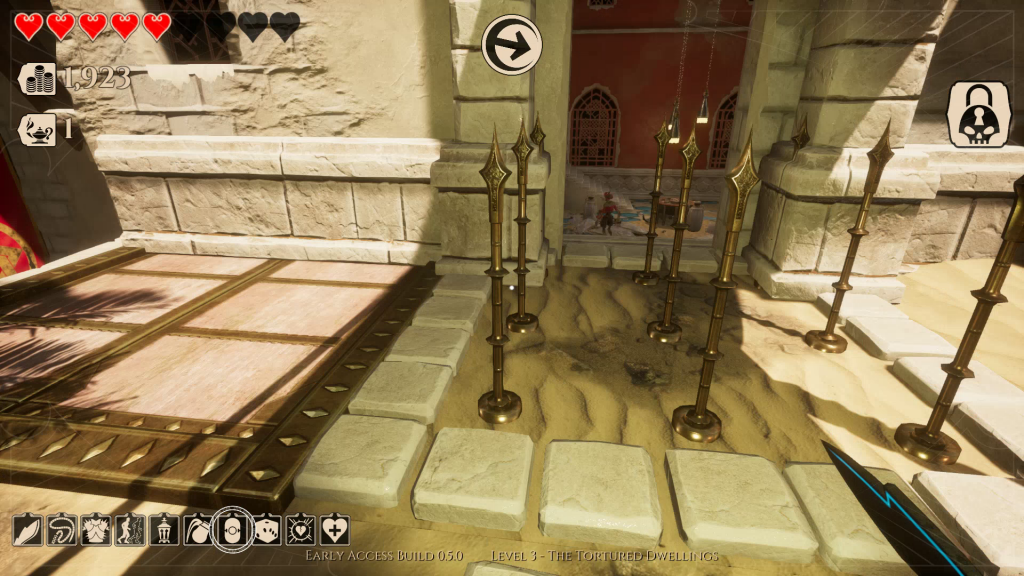 Let’s talk about the roguelite component. You know the drill, procedural generation, and permanent death. Procedural generation is rather good, the levels are interesting with a mix of well-guarded treasure rooms and courtyards that are a carnival of traps. There is one for everyone, kids and the elderly, any height will be fine as long as you die. If you walk through a back alley, guess what? More traps, such as vicious dart throwers along the walls. What is missing is a map since the layout is a bit chaotic. 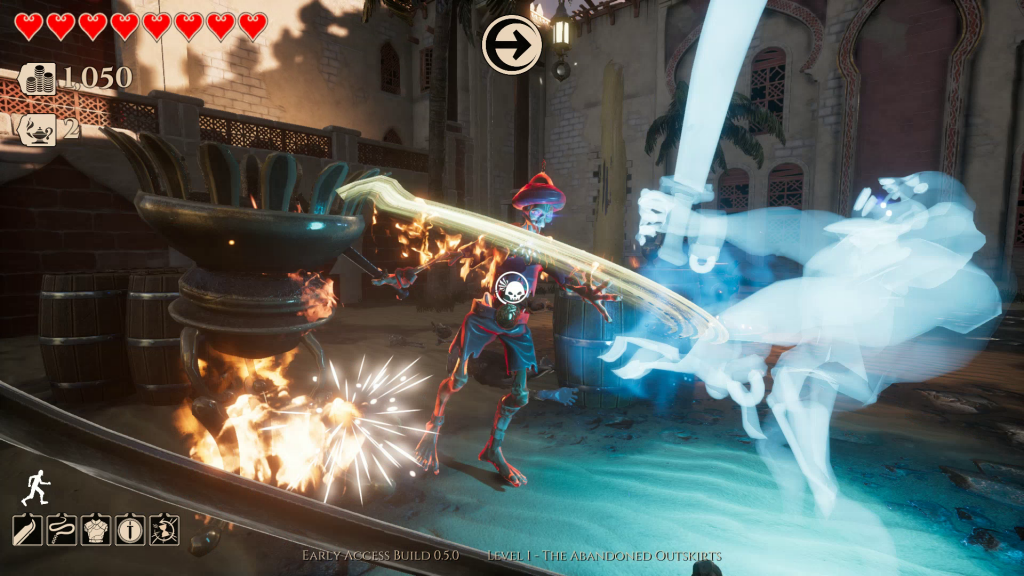 The first boss fight is rather difficult, and I must admit that I never noticed the attacks of the next boss because I went through them like a breeze. What’s strange and rather peculiar, is that when you die you can use a portal to reach a later section, as long as it is after a boss you defeated. And it’s not a burden as in some other games, because there are no experience points or stats that would justify starting from the beginning. It’s very well possible to be successful with the base equipment, and quickly acquire enough gold to buy better stuff. 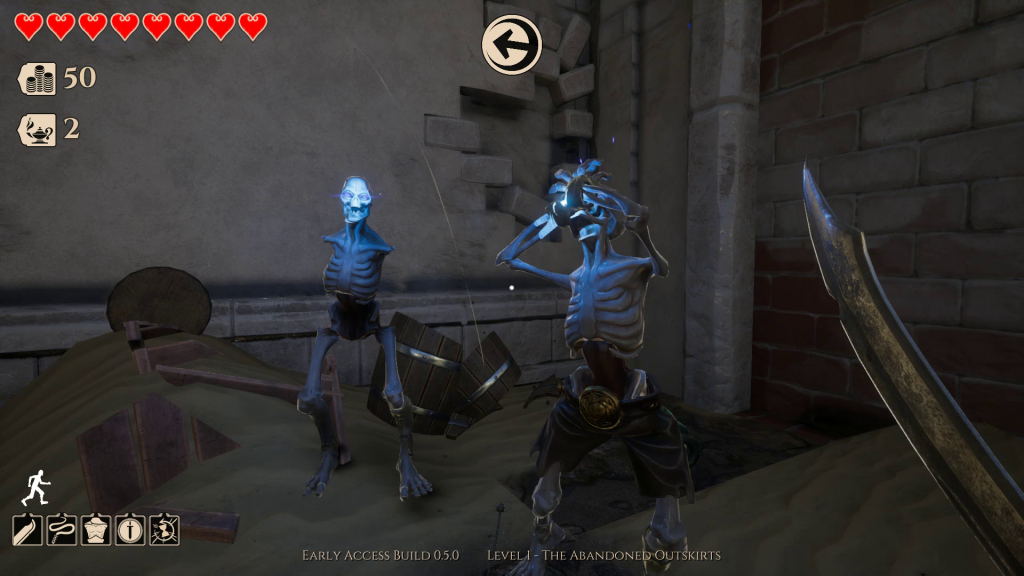 Another issue of roguelite games which is made worse here are gameplay modifications. For instance, increasing the reach of the whip. It’s the sort of subtlety that requires some adaptation from the game, especially in first person view. And then we die, we lose the reach upgrade and our senses are confused and need time to adapt again. It’s a problem that I often find with roguelites, but in first person, it’s much worse. 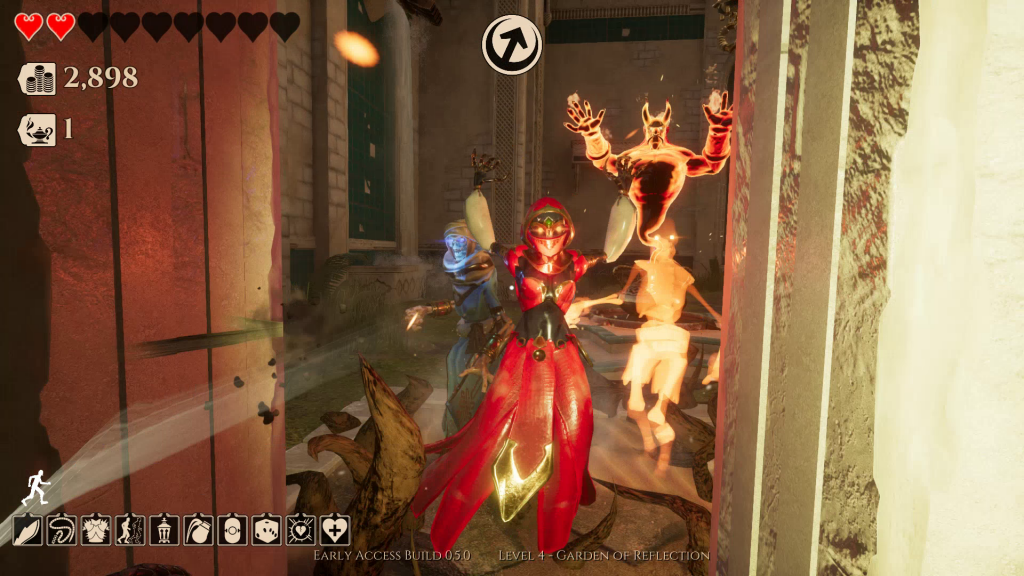 Equipment is the worst part of the game. First, you don’t know what something is used for until you buy it, thanks to an outdated roguelite model. Once you have bought something, you will always see what it does, but the descriptions are not very informative, and most importantly, there are no numerical values to indicate whether a weapon is better than another. But you know what? It does not matter, because there are too few items to buy. Genies are selling items, and once I reached one-third of the game they were only me showing stuff I already had. Which is one of the reasons why you can start the game from a later section and straight away buy the good stuff. There are also genies who allow deactivating traps. Obviously, I ignored them, I find it very rude when someone wants to remove my lovely traps. 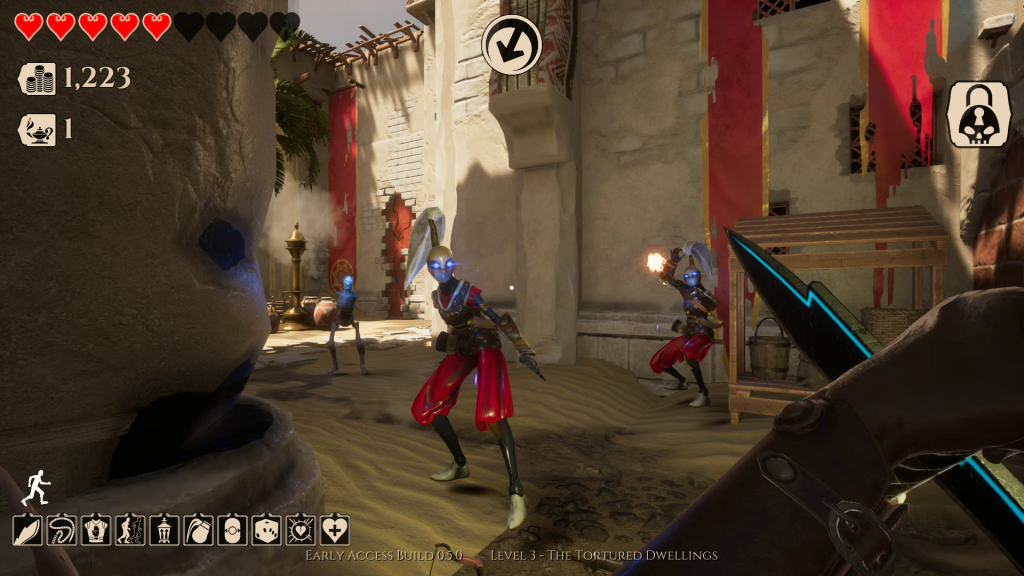 The player can benefit from three wishes to spend with the chosen category of genies. In reality, if you want an optimal play you will just use those wishes to convert the two type of evil genies that attack you and thus transform them into defensive turrets. Keep the last wish for genies who give health. It upgrades one healthpoint benefit to a full regeneration. This is mostly the only way to get health back in this game. So, the genie is either giving you one heart per level with some luck, or you go full force and it’s too much regen. Not a very balanced system. 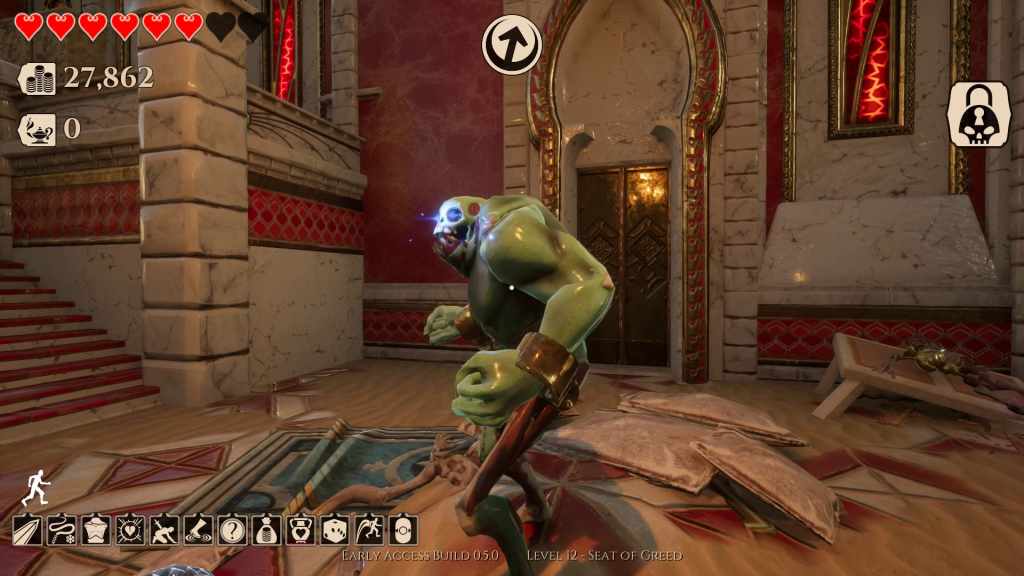 The Sands of Time

I managed to complete the game within 4 to 5 hours (some players report 30-40h). Rather thin, for a roguelite (although your mileage can vary, obviously). But you can spice up your run with bonuses or curses that you choose, yet it’s not like Into The Breach which was pushing its player to play the game over and over in a different way each time. It still allows removing the awful timer, an unreadable hourglass which does not let you take your time if you want to explore the levels. I need time to trigger all the traps and pick my little favorite! 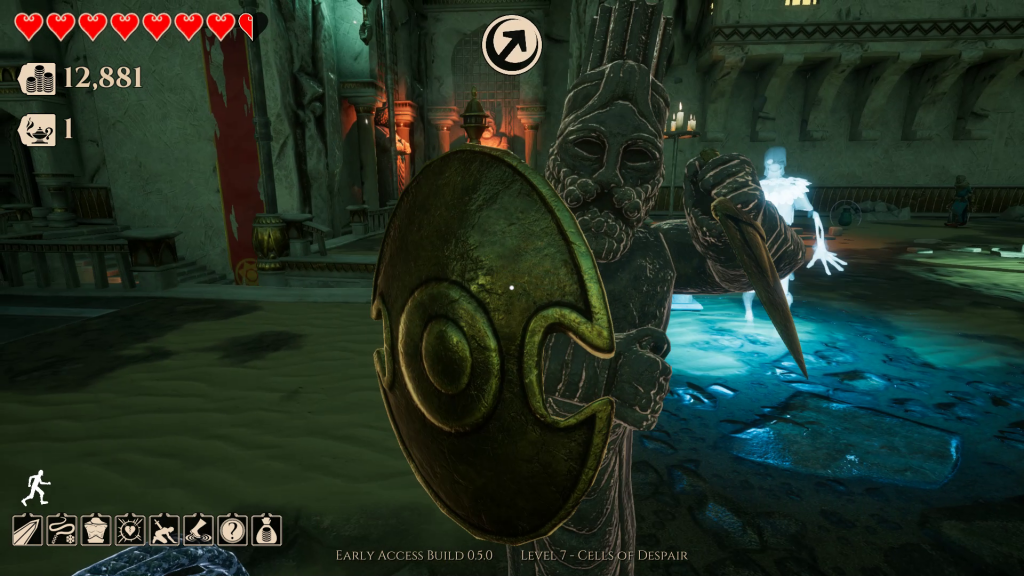 Enemies are different as you progress through the levels. The game even features an excellent opponent in the form of statues that cannot be injured with the base weapons. They only move when the player is turning their back on them. We have already seen this in the Dr. Who series, or in the videogame Eldritch, but I love this. They distillate fear and terror. Furthermore, there are wizards, and skeletons with a shield that are hard to hit. The skeletons without arms rushing the player are fun to fight, they remind me of Serious Sam. Some enemy projectiles are also homing, which I find annoying in City of Brass. Overall, the designs and animations are great, and the enemies give great feedback when they are hit in different ways. Their eyes are suddenly lit in blue when they notice the player, which ensures that they are recognizable even in the dark. Ghost companions can be recruited, they are very useful to occupy opponents but they can occasionally get stuck behind a tree or block a hallway. 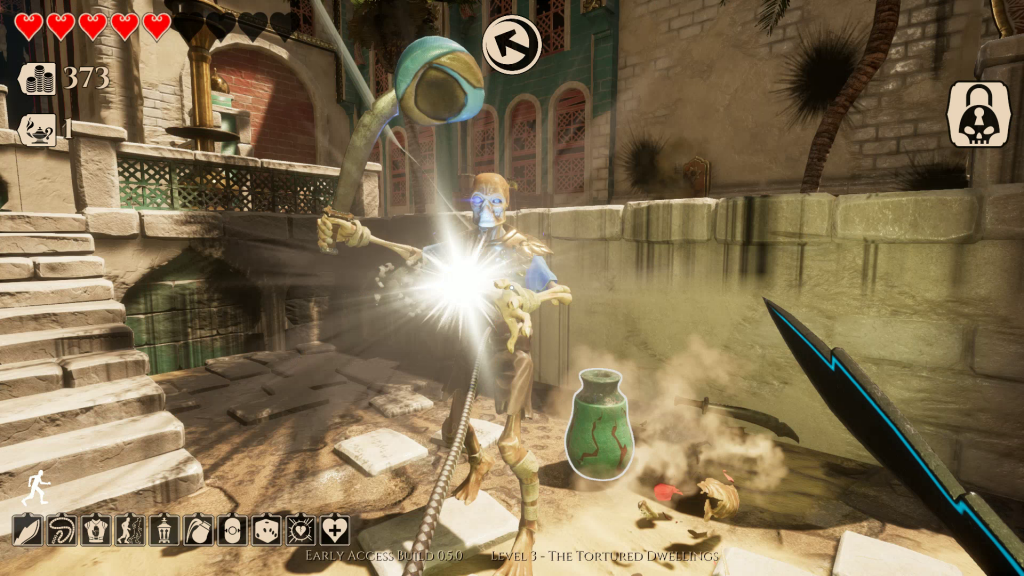 Sound design is great, and it helps locate enemies and treasure. As you probably noticed, the graphics are beautiful, and the shadows are incredible. For an indie game, it’s top quality. The art style is overall excellent, I loved the look of the enemies and their toy-like texture. Looking at the options menu, besides removing icons, there is everything that you might need. You can change the FOV, all the graphical options (just don’t forget to set the resolution to 100%, otherwise the game is ugly), and you can rebind the inputs. One might also notice that the game works perfectly with a gamepad, which hints at a possible culprit for the lack of sword fighting features. 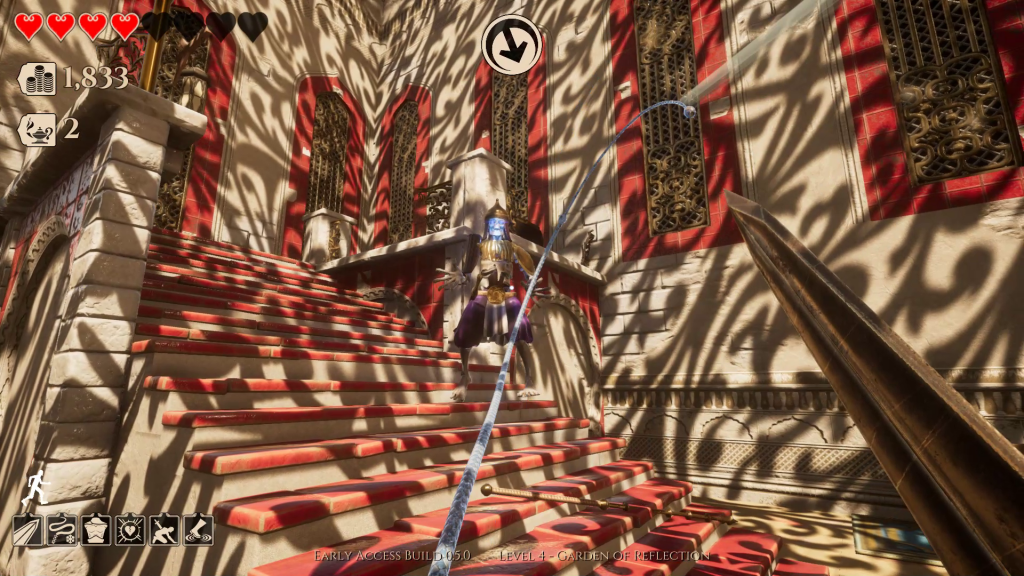 After the failure of Mirage Arcane Warfare from the devs of Chivalry, I was wondering whether an Arabian Nights game would be attractive. The answer is yes, City of Brass is very charming and swings out of the crowd with its whip and traps, which, combined together, give an excellent feel to the game. It’s refined, it’s tactical, there are tons of classy combo possibilities like Indiana Jones and Dark Messiah. Except that the saber is underwhelming, and this won’t convince the barbarians coming in the hope of chain beheadings. Also, there is a lingering feeling of an unfinished game. The beginning is fantastic, but then the roguelite part does not feel well honed, the equipment is just confusing, and the further I went into the levels the less I was surprised or amazed as in the very polished first levels. I am still celebrating the possibility to adjust the difficulty, and that it is encouraged to take a portal to the later parts of the game rather than starting over. The game is nowhere near perfect, but it’s good and will keep you busy for a few evenings. It’s my favorite roguelite FPS, but with the 25 dollar price, I would recommend waiting for a bit, except if you are certain that you will enjoy what’s on offer. As for me, I made a lot of good memories while playing City of Brass.