AIdol tells a light-hearted story of teenage development, friendship, and love in a relatively believable setting based on the Japanese idol subculture.

AIdol is set in Fukuoka, Japan. The game tells the story of the most popular virtual idol ever made: Aiko. Aiko is an android, created by Lyriq and programmed to entertain her thousands of fans better than a flesh-and-blood girl could ever do, though only remotely from her room in the Lyriq office building via holographic performances. Based on the popular idol (aidoru) culture in Japan, this extension from existing completely virtual idol to an AI in a physical body doesn’t seem that far-fetched to me.

Cut to a teenage girl, Hana, who claims to be Aiko’s biggest fan. We learn that Hana is somewhat socially impaired, but is quite happy this way, spending most of her free time on the Internet searching for Aiko “merch” and browsing the virtual idol forums. Hana ends up in contact with someone claiming to be Aiko herself, and also claiming to be damaged, her code corrupted. Though Hana is understandably disbelieving, she nevertheless agrees to go to Idol Fest that weekend, with “Aiko” promising to prove her identity to Hana there.

Join Hana as she learns the truth about Aiko and the strange Internet contact, and maybe even makes some friends along the way.

The game features lovely hand-drawn backgrounds and nice big-eyed anime-style character art with a consistent style. Many of the locations are reused throughout the story and I would have liked to see a bit more variation, but what’s here is really rather good. As is common for visual novels, I’m once again slightly disappointed by the lack of people drawn in any of the locations, particularly when this game is largely set inside and around a crowded convention center, but it does seem to be the way of things, so it’s not surprising to see it again here.

Character animations are fairly limited, but facial expression changes are used to good effect. I didn’t notice any background animations at all. 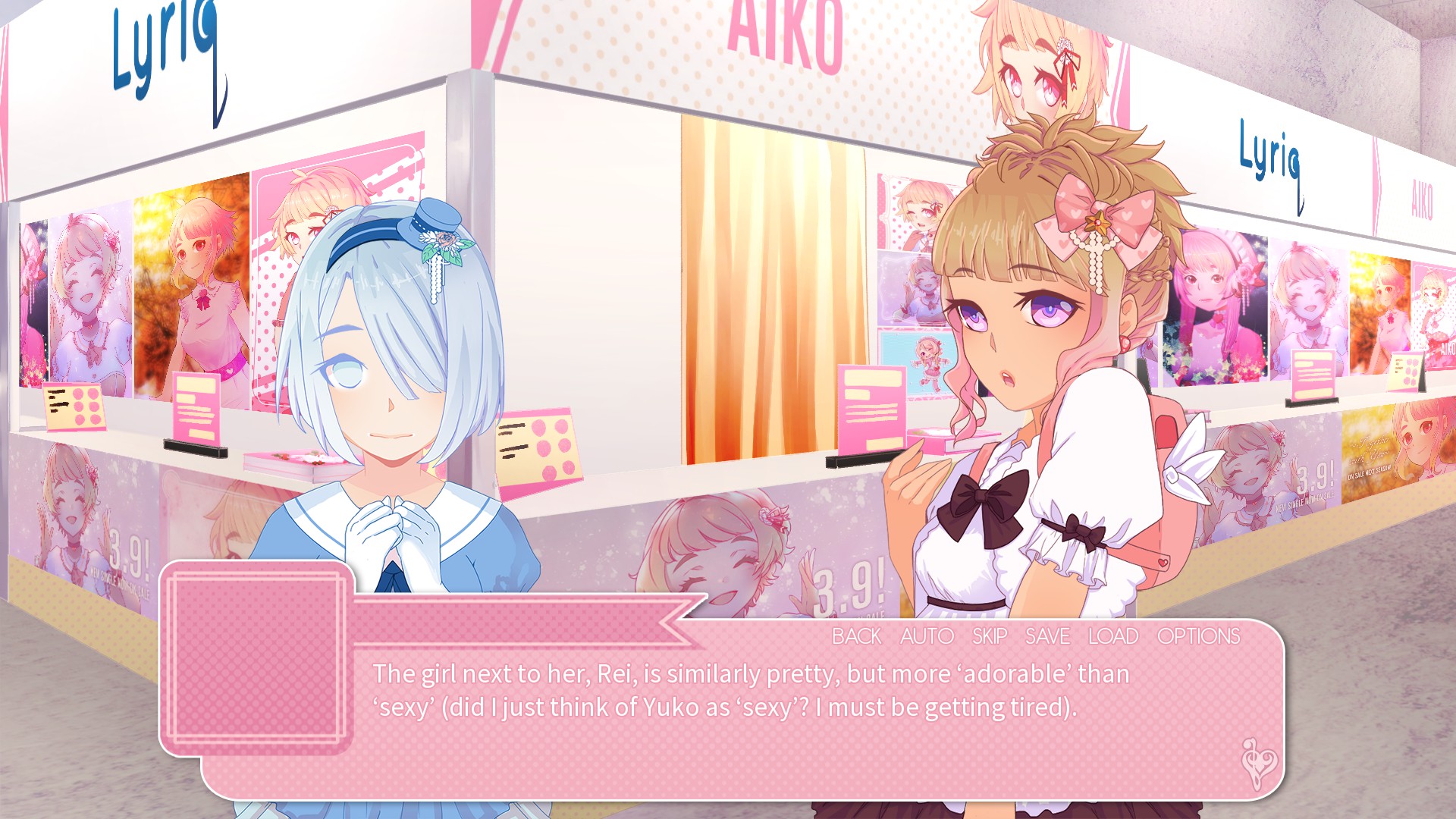 The game features fairly typical anime-inspired visual novel electronic background music through most of the game, with a title theme that’s reused a few times and is quite loud compared to the rest of the game; it’s also rather catchy in the J-Pop style. Sound effects are very limited and mostly go unnoticed.

Many anime visual novels include full speech in Japanese, but AIdol has none. At first I found this a little disappointing, but after a short time I actually didn’t miss it at all. In some ways it was better as I didn’t feel like I was missing something by skipping through the text faster than the speech, had it been present, would have let me.

The interface should be familiar to anyone who’s played a visual novel before. There are a number of game engine options for controlling text speed and the like and the game can be played in windowed or full-screen modes. 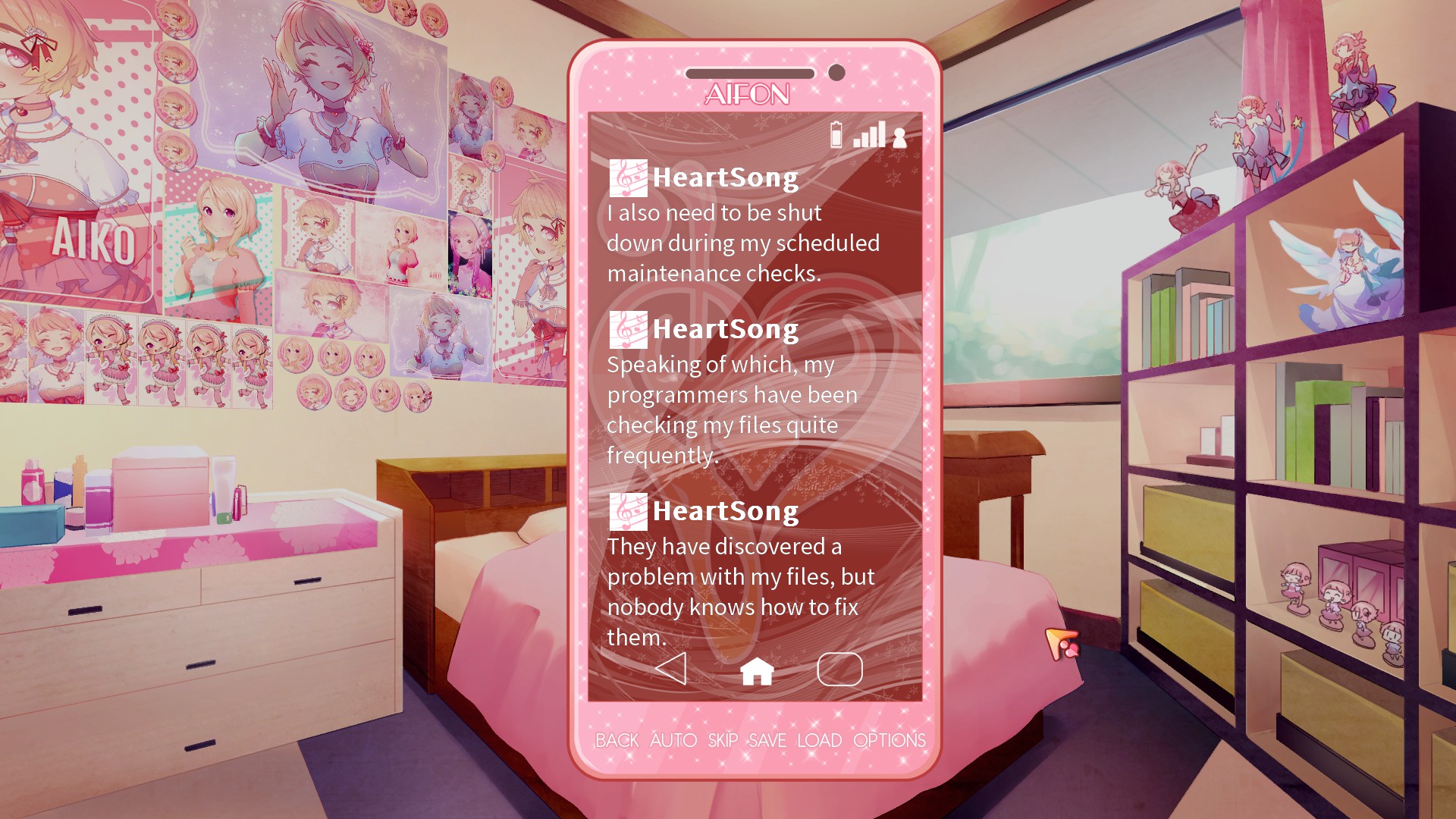 AIdol plays like almost any other visual novel. The interface is the standard semi-transparent text box in the lower half of the screen, over full-screen hand-drawn backgrounds and animated paper-doll character cut outs. There are some automated screen transitions and an interesting use of a mobile phone screen in the game in place of the main text box, but ultimately the game play is what you’d expect. 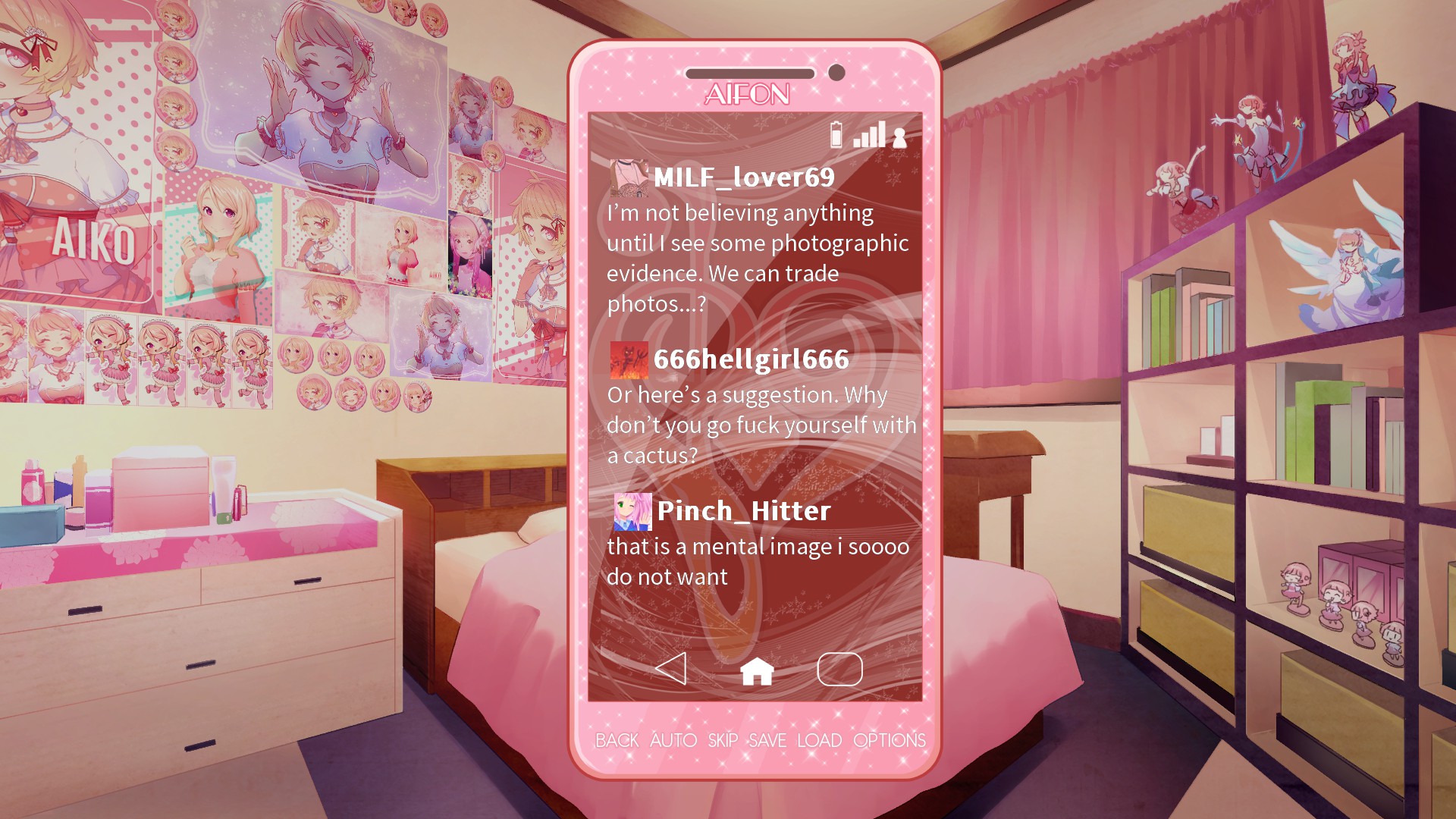 There are eight endings to AIdol, reached through combinations of the game’s many choices. I’m fairly sure some of the choices you can make are unimportant, changing only small parts of the story, but even so it’s relatively straightforward to work out what’s required to reach each once you’ve read through once — and looked at the Steam Achievement names. The skip feature is very fast, too, so reloading or restarting to see what happens with different choices is easy.

As far as the story itself goes, it’s relatively short and not that much actually happens in it, it features a number of likable characters. Grammar is relatively good, though with minor errors here and there, and the story reads to me as if it was written or translated by a native English speaker, or at least someone very fluent in English; I noticed some colloquialisms that I wouldn’t otherwise expect. 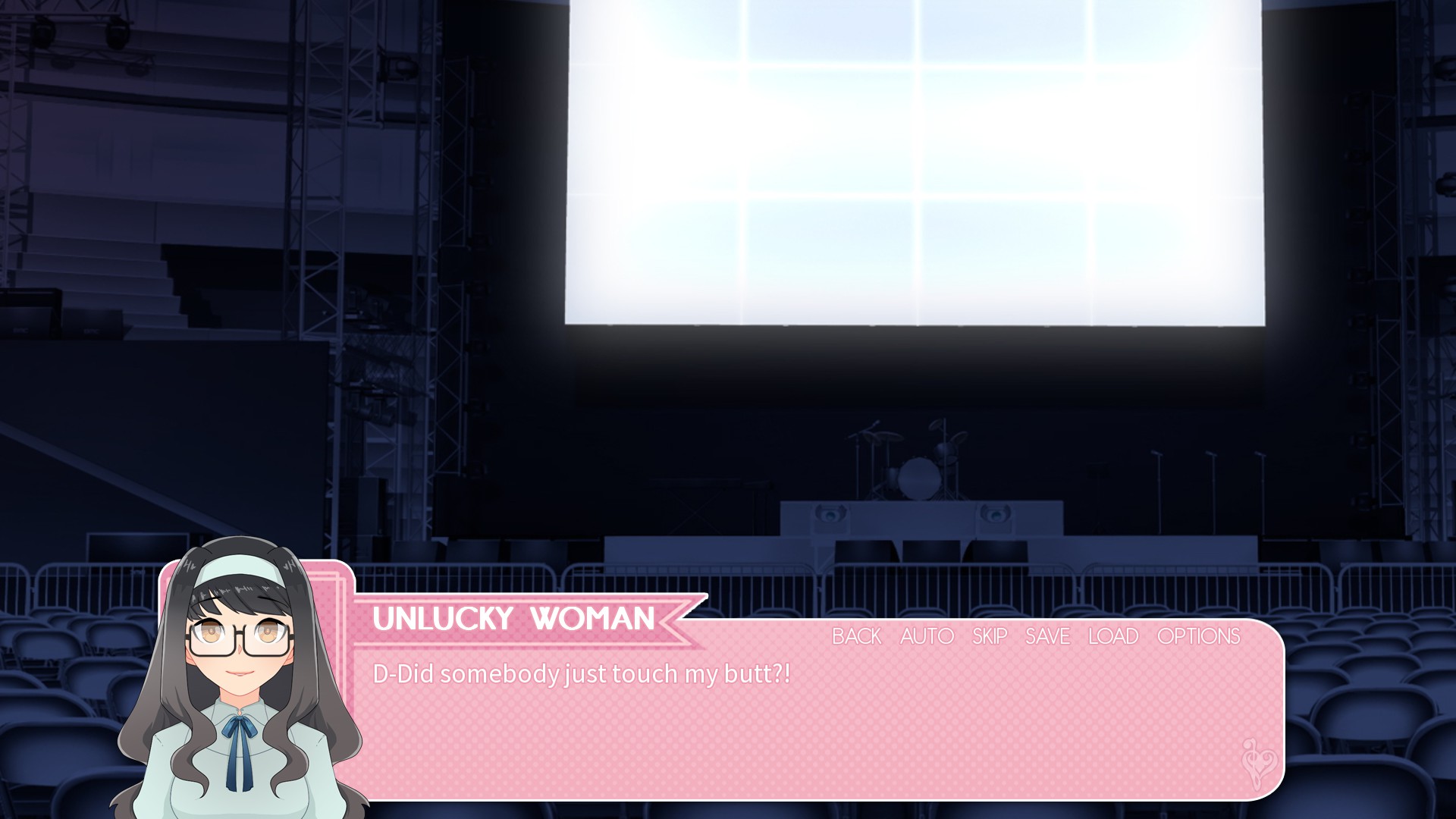 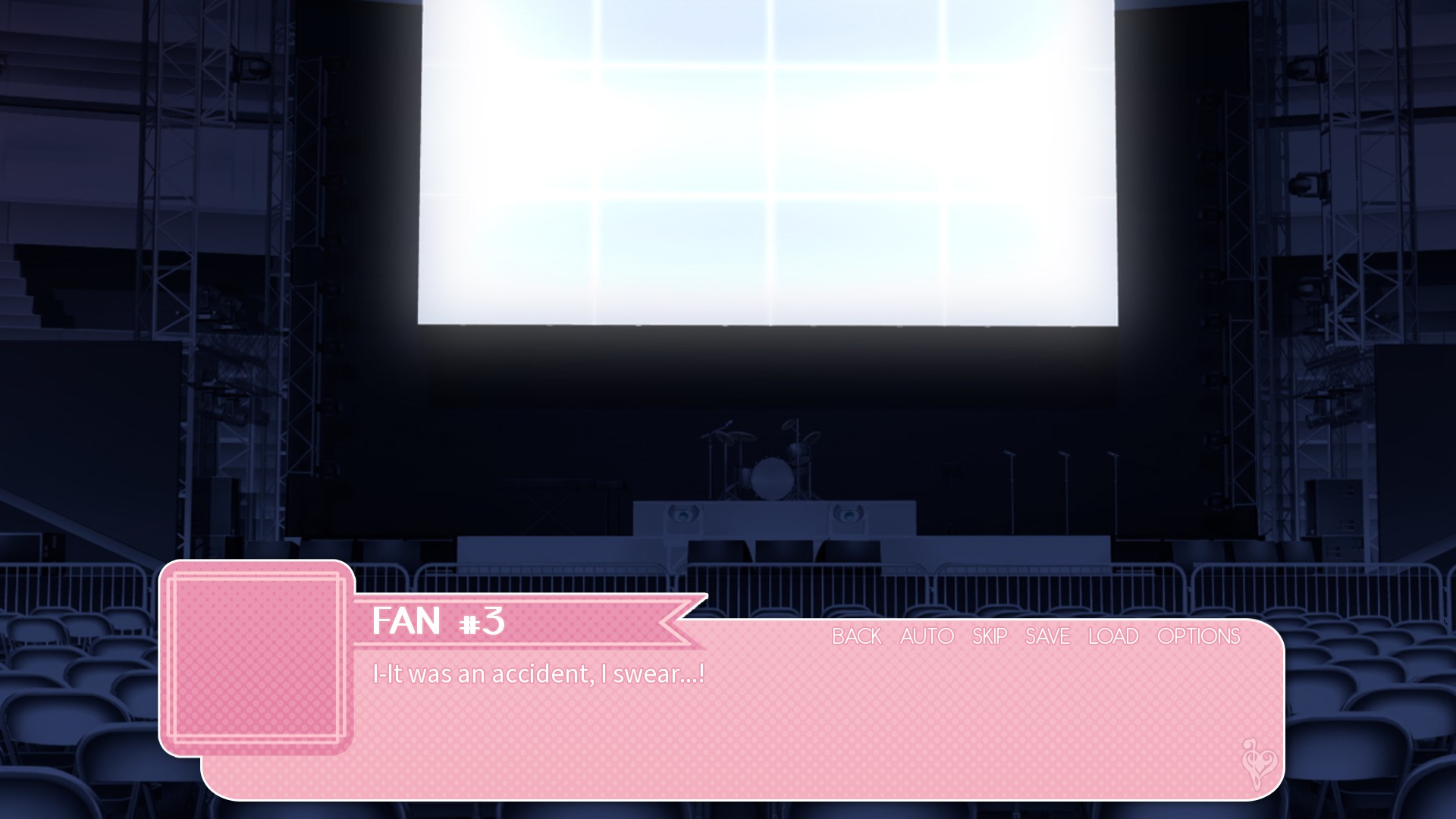 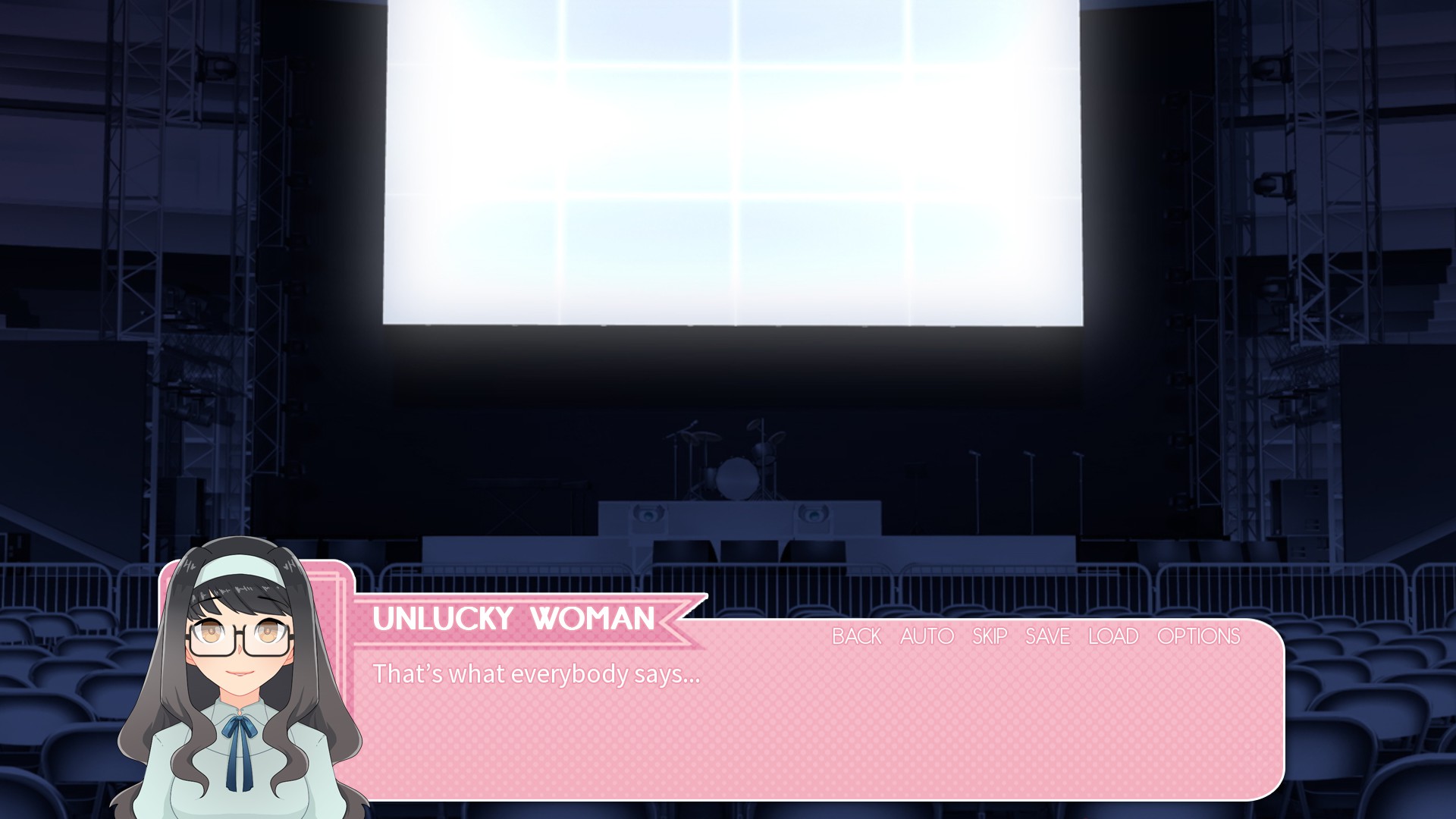 A few pop-culture references and jokes made me smile, as did the “Set fifteen minutes into the future” blurb on the Steam store page for the game (though whether this is actually a reference to a certain ’80s TV show that I loved I don’t know). The story features some ‘fringe’ activities such as cross-dressing, cosplay, and Lolita fashion, but these are really incidental to the plot. Similarly, while the story includes implied homosexual sexual activity, this certainly isn’t the focus. 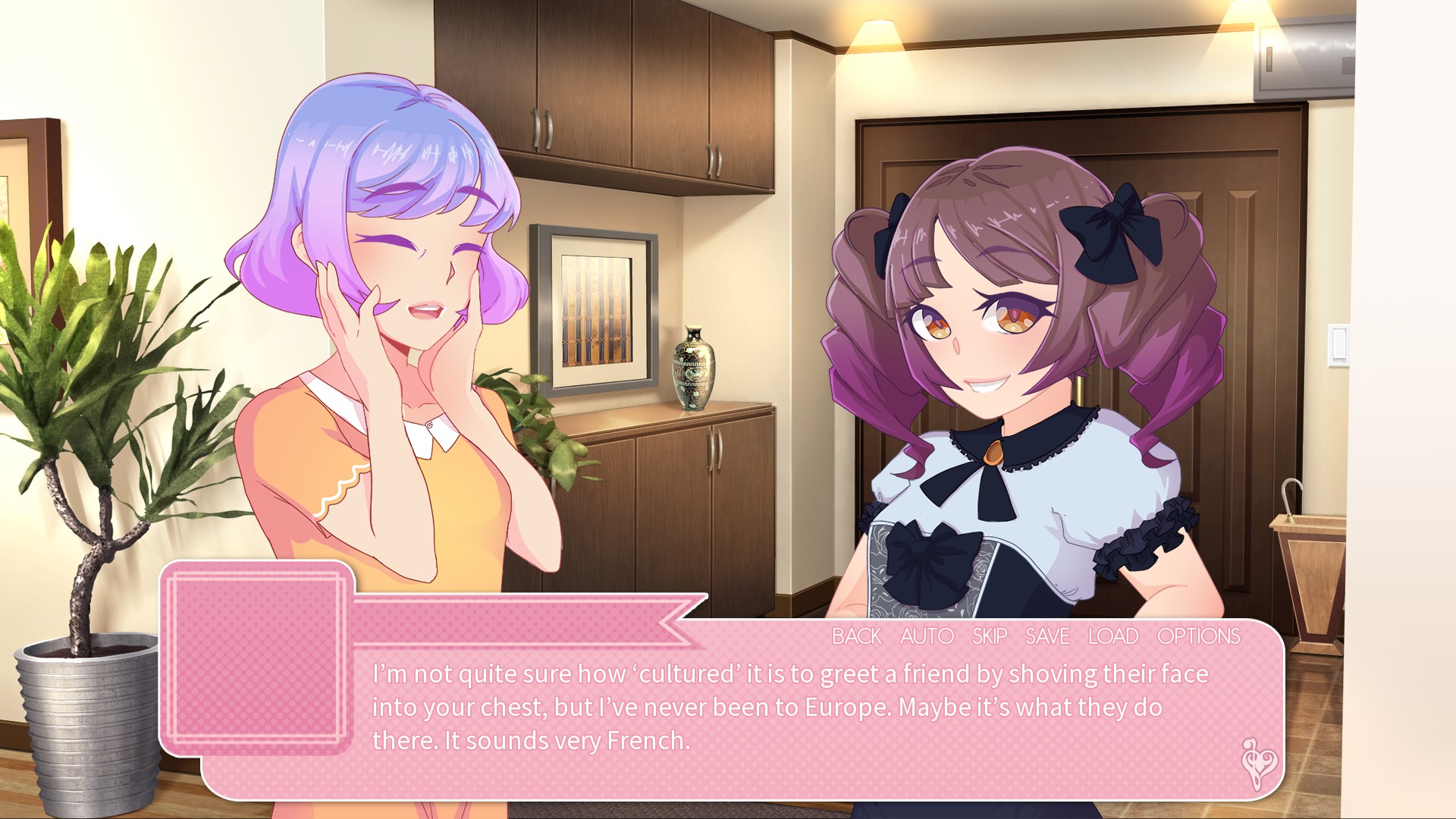 AIdol uses the Ren’Py engine, which will be familiar to most visual novel players / readers, but in this case for some reason it suffers from bad mouse lag when interacting with the UI, as if highlighting buttons when moving the mouse cursor over them causes a problem. It’s also a touch buggy, with an intermittent crash within the game engine when opening the Gallery from the main menu, and the AUTO text setting doesn’t work at all for me, regardless of the text speed I set in the options. 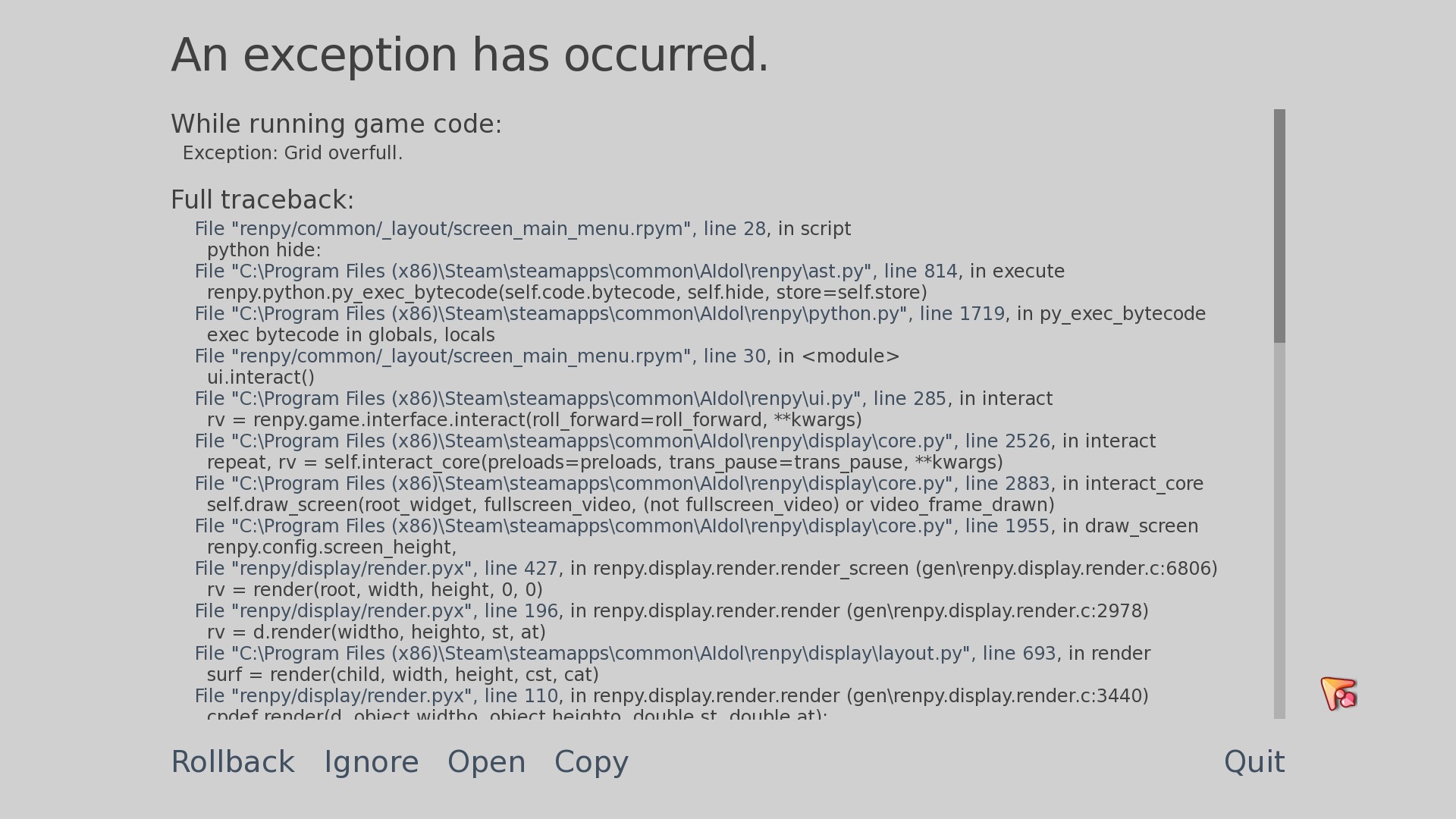 I thought AIdol was a good light-hearted visual novel that provides half-a-dozen or so hours of entertainment.. It’s a heart-warming sort of story in which even most of the characters who do bad things do so for good reasons. The setting is interesting, the main characters are likable, the story is well written if a little uneventful, and the art is lovely. I’m surprised at the performance issues and bugs I encountered, since Ren’Py is usually pretty stable, but these weren’t game-breaking by any means.