Theseus‘ amazing visuals are all about contrasts, and boy does it look nice! It’s just a shame it’s so short.

Theseus is the latest game from indie developer, Forge Reply srl, and the developer’s first foray into VR.

You play the titular character, waking injured and with no idea of where you are, or why, in a strange realm of bloody waters and floating rubble. You limp towards a door through which a bright white light shines and find yourself in a strange, decaying labyrinth.

After wandering aimlessly for some time you discover the faint spirit of Ariadne, a woman who explains your situation. You are Theseus, trapped, like her, in the labyrinth by the minotaur, Asterion. Asterion was once the guardian of the place, but was corrupted, becoming evil. As the darkness infused him he became blind, but his other senses have been honed and he seeks you. Your only way to freedom is to reach the bright light at the center of the labyrinth, where Ariadne is held captive.

Though the game doesn’t start with a fancy CG video providing an in-depth explanation of the game’s lore, that’s really not needed. Instead, when you begin you find yourself in a weird sort of floating void, limping along a river of blood the color of which is a vivid red against the muted colors and darkness around it. From there you move into the excellently made labyrinth, with wonderfully dirty textures and crumbling models. 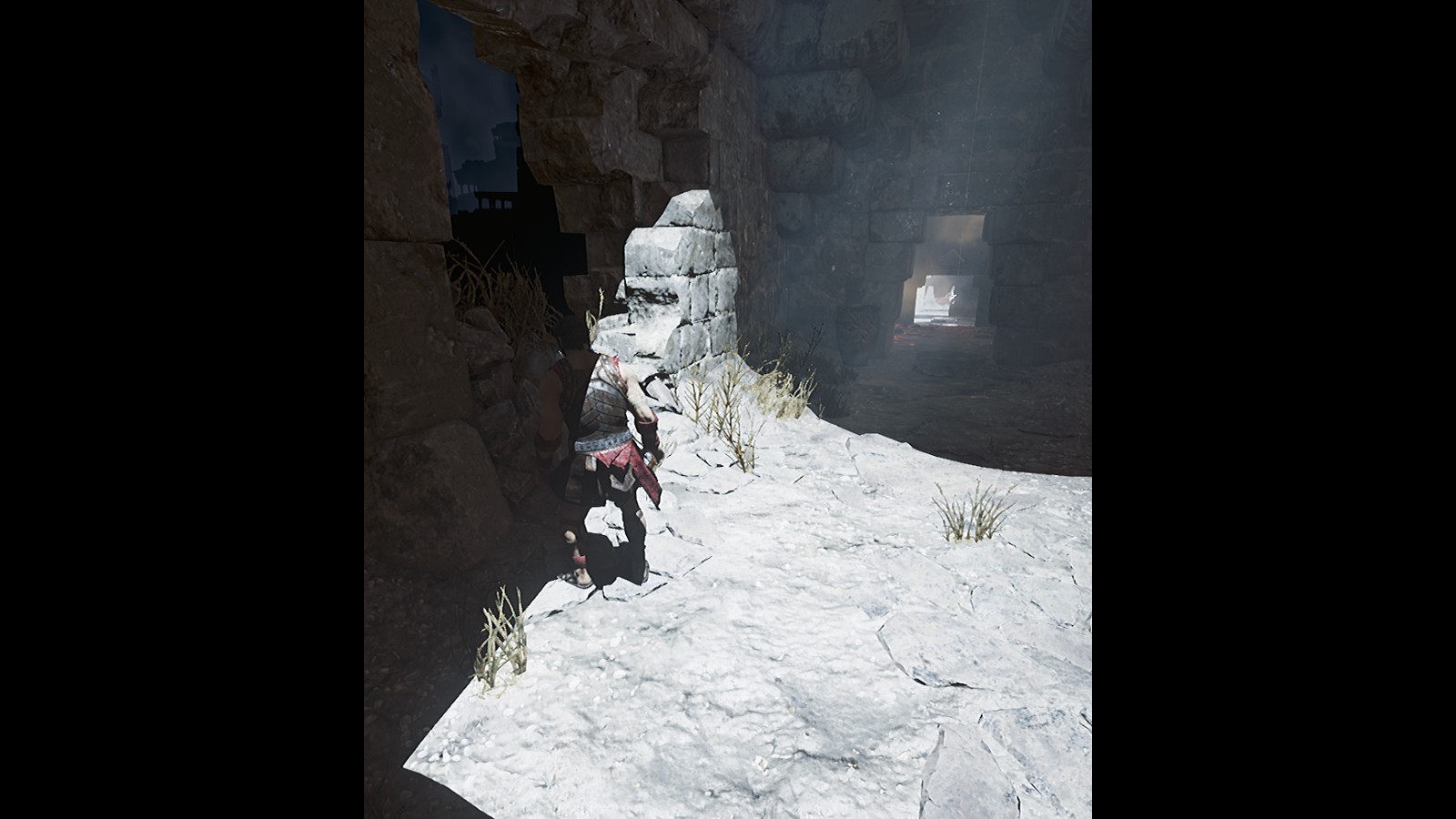 The game uses light and darkness to fantastic effect. Shadows are so sharp you could almost cut yourself on them, flames look like flames, and dynamic lighting from your torch is dim and flickery, but very welcome in the darkest of passageways. The contrast is simply amazing. Though the colors used are mainly black, greys, with even the fitfully growing grass seeming wan and sick, the lighting color changes in different situations, and Ariadne’s brightness is a welcome respite. And that river of blood is impressive each time you see it. 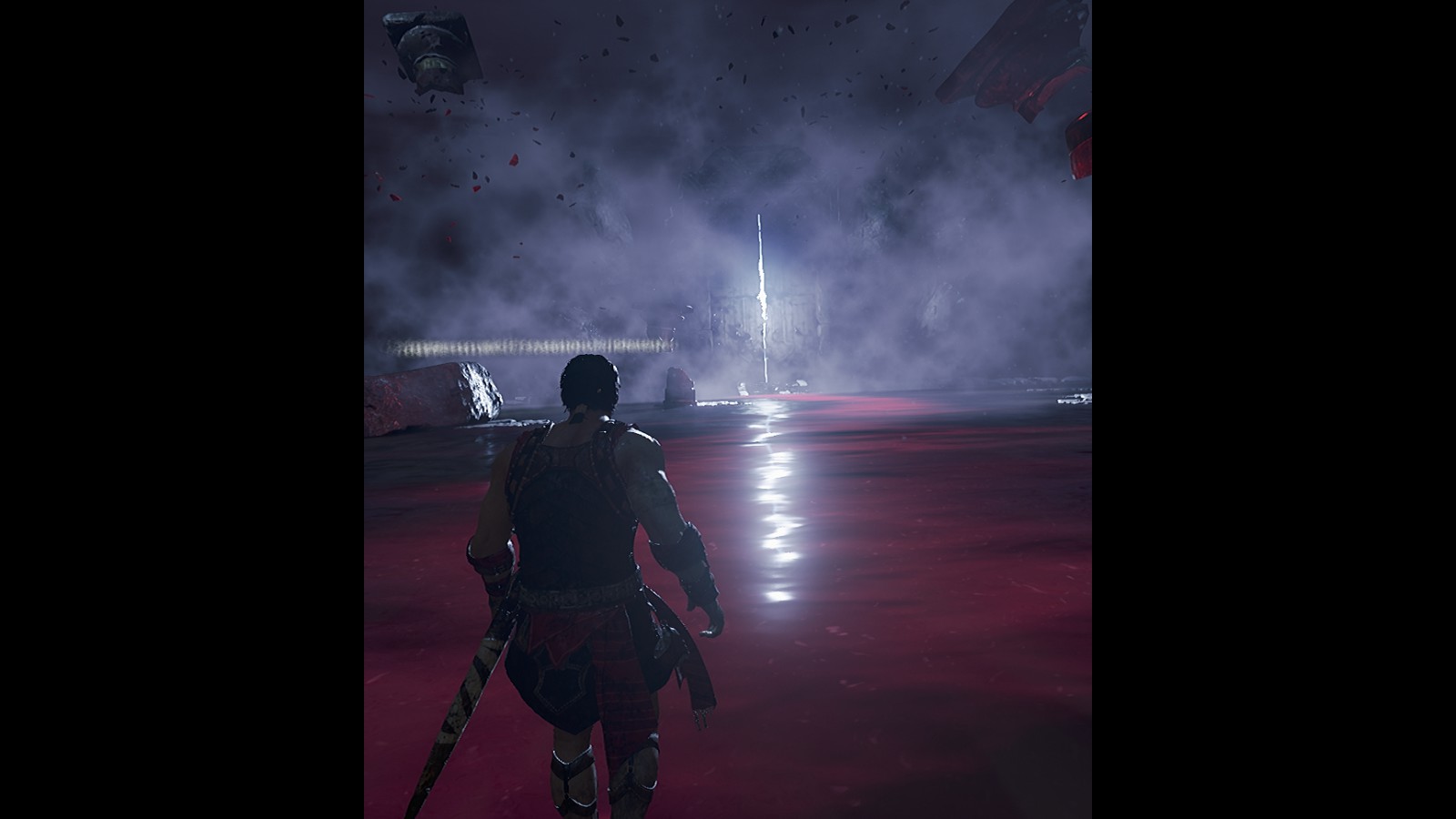 The game is played from a combination of floating and fixed camera positions, with the VR support putting you in the camera in each scene, able to rotate, but otherwise not move it around. Unfortunately, many of the fixed cameras are positioned more for artistic effect than for playability, often making it hard to control Theseus or even to see where he is after an area transition. Theseus moves his head as you do when the scene uses a floating camera, which is a nice touch.

The character and monster models are great and mostly very well animated. Textures, too, are good, though the few times I saw Theseus’ face close up I realized his expression seemed rather vague and unchanging, leaving him seeming a bit like a puppet rather than a person. The sheer size of the Minotaur and some of the world models looks impressive, particularly so given the game is in VR. 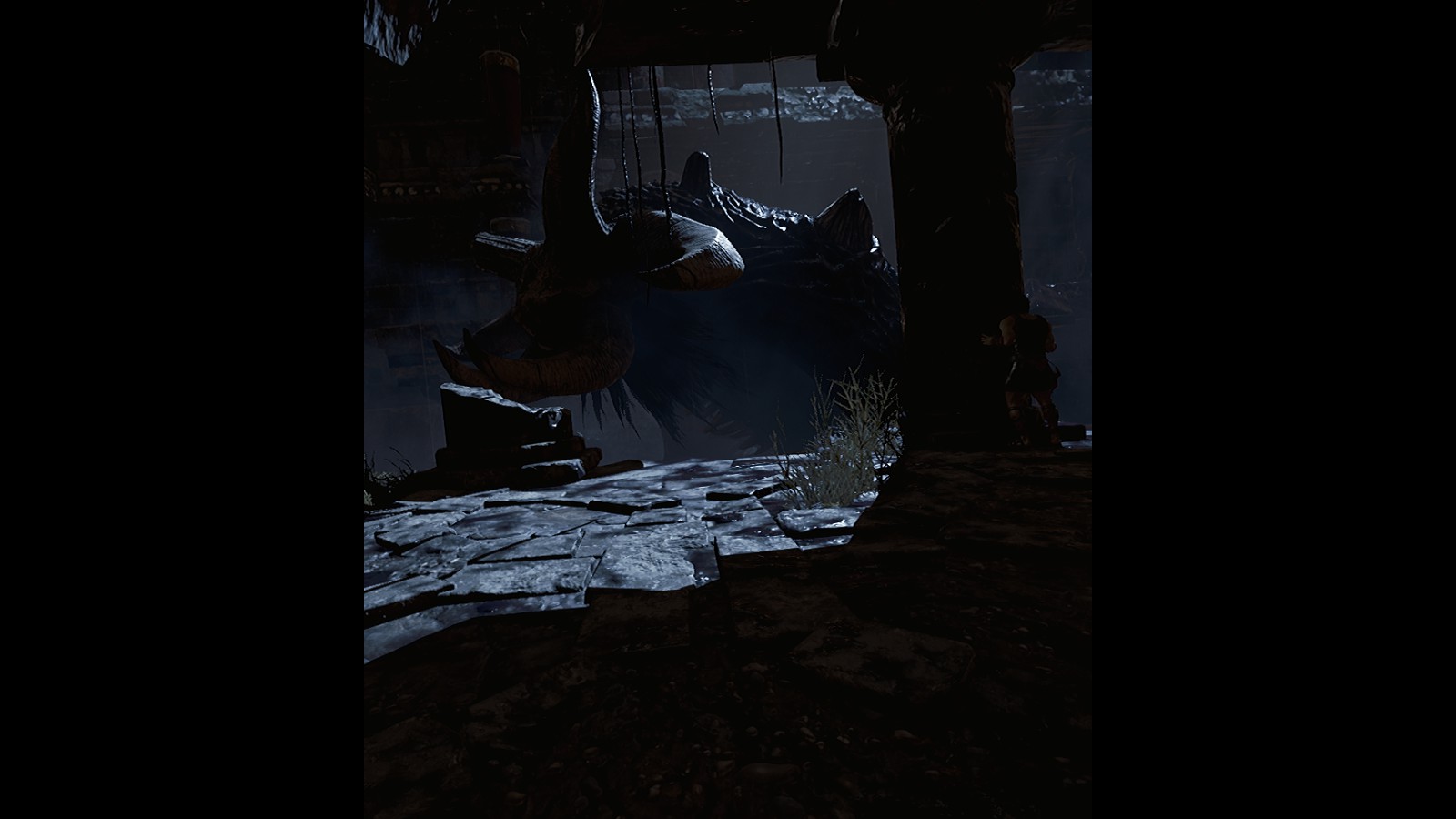 In-game text looks fantastic. It’s drawn inside the 3D scene as you move around and is very impressive for such a simple effect. It’s worthwhile watching the credits just to see the text appear and fade away. Wow.

I did notice a couple of very minor graphics issues that I only mention because everything else was so well done. First, one of Theseus’ animations is too slow and looks a bit wooden: when he’s hanging from a ledge and shuffles to the side it doesn’t quite work. Second, the skyboxes look ever so slightly off. They’re animated and provide a good illusion of depth that isn’t really there, but when you move slightly from certain angles the perspective looks a little off, and you can see a hint of edges that shouldn’t be there.

The music is understated, but excellent, and fits the game perfectly. Often mellow and barely noticeable, but lovely when you hear it, then interspersed with dramatic pieces as you battle Asterion and his creatures. Sound effects, too, are great, but Theseus is a very quiet man, the lack of any vocal outbursts adding to the slight feeling of woodenness I get from him. There is no proper speech, but Ariadne’s voice is extremely close to it, like a sort of dramatic form of Simish. 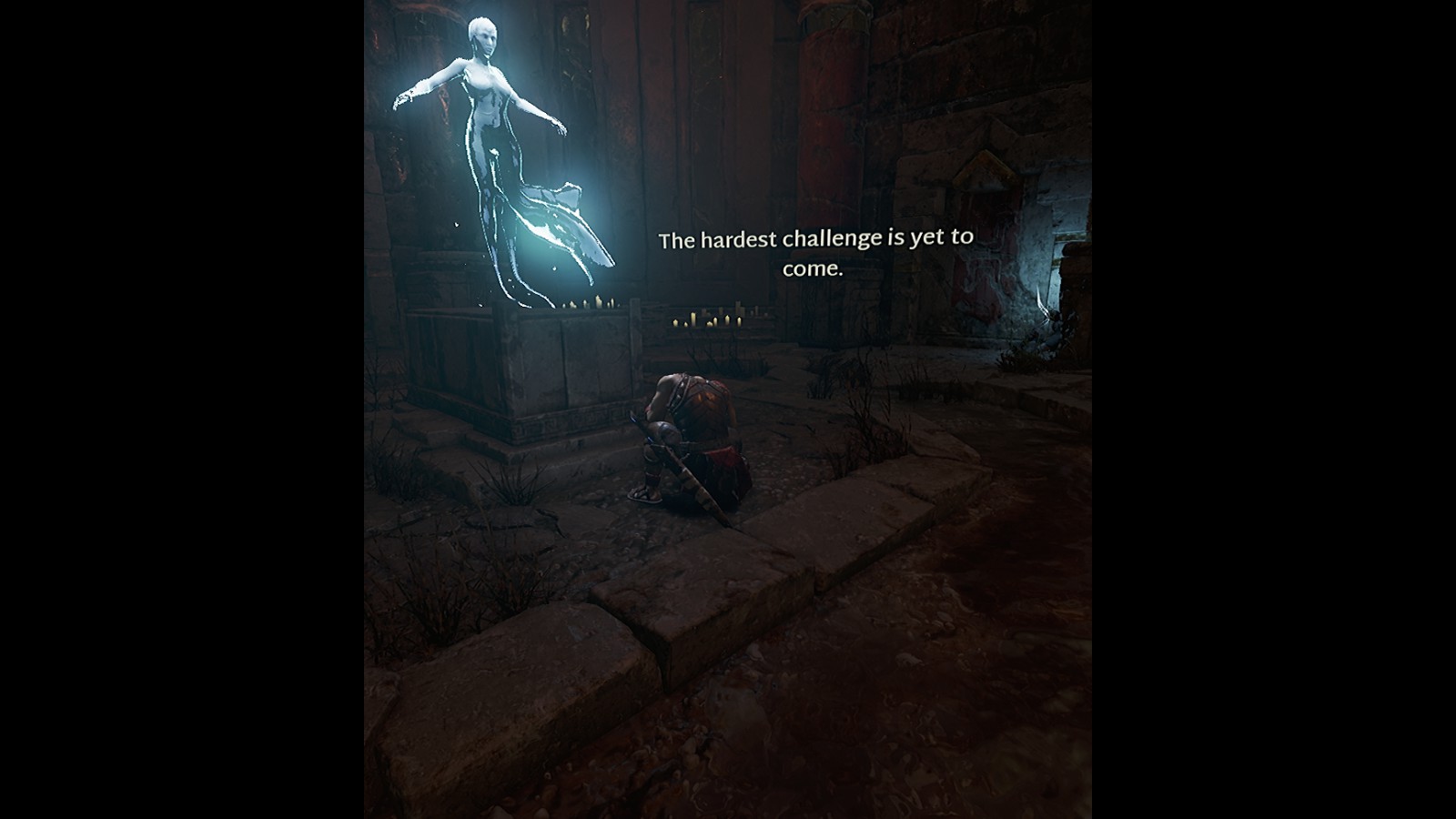 The game is essentially a simple third-person 3D action platformer. Theseus runs around moving from fixed area to fixed area, climbing or crawling over obstacles, dangling from ledges, dropping, climbing, and shuffling side to side. It’s a bit like an early Prince of Persia game, though there’s none of the sprinting leaps to far off platforms; Theseus is much slower moving.

There are no real puzzles, though unlocking some of the hidden achievements requires backtracking and taking the sword and torch that are found later in the game back to earlier areas to use them. There’s also only fairly limited combat, with only one type of enemy — a giant spider — but the controls and pacing of this are surprisingly well done for such a minor part of the game. 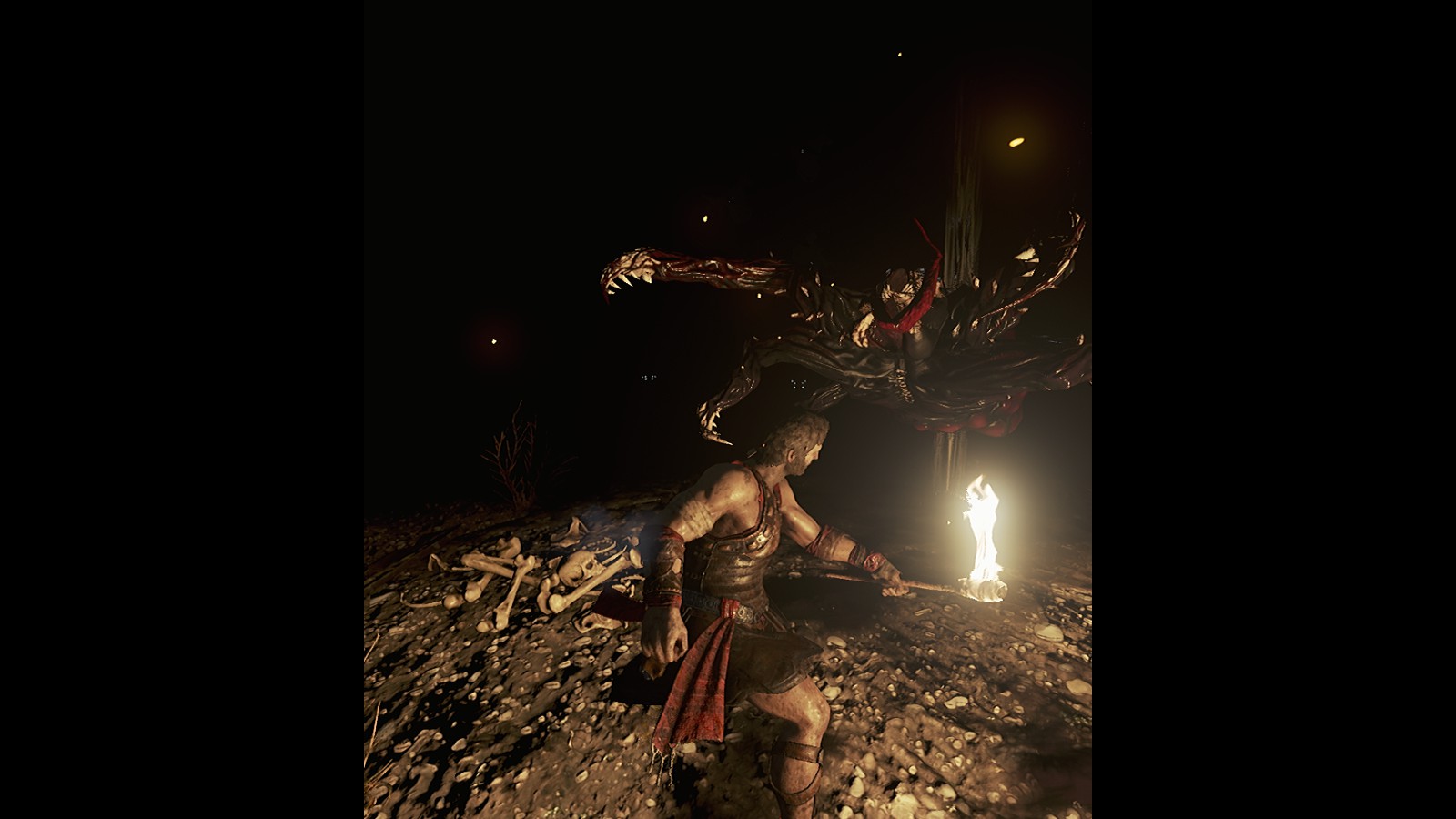 The game is played with a controller and controls are tight and responsive. Fixed cameras are sometimes painful, making some navigation tricky, especially given the impressive light/dark contrast. It would be a great addition if you were able to use the right controller stick (currently not used at all) to move a fixed camera around to explore each area, perhaps pressing it to reset to the default position.

The game is designed for seated VR play and when I began I received a “headset out of bounds” message that was a bit weird. It was easily fixed by pressing the BACK button on the controller, though, which resets the headset — a one-touch feature that makes headset setup so easy I wish it were included in every VR game.

As with many VR games, Theseus is very short. I have 2.2 hours’ playtime, according to Steam, and I’ve completed the game with three hidden achievements remaining. There’s apparently a second ending that can be reached by unlocking all achievements, but I’m not a huge fan of searching- and backtracking- based achievements, so I don’t think I’ll bother. I imagine even the keenest achievement hunter couldn’t spend more than three or four hours, though. For the amount of content here, the asking price seems a little high. 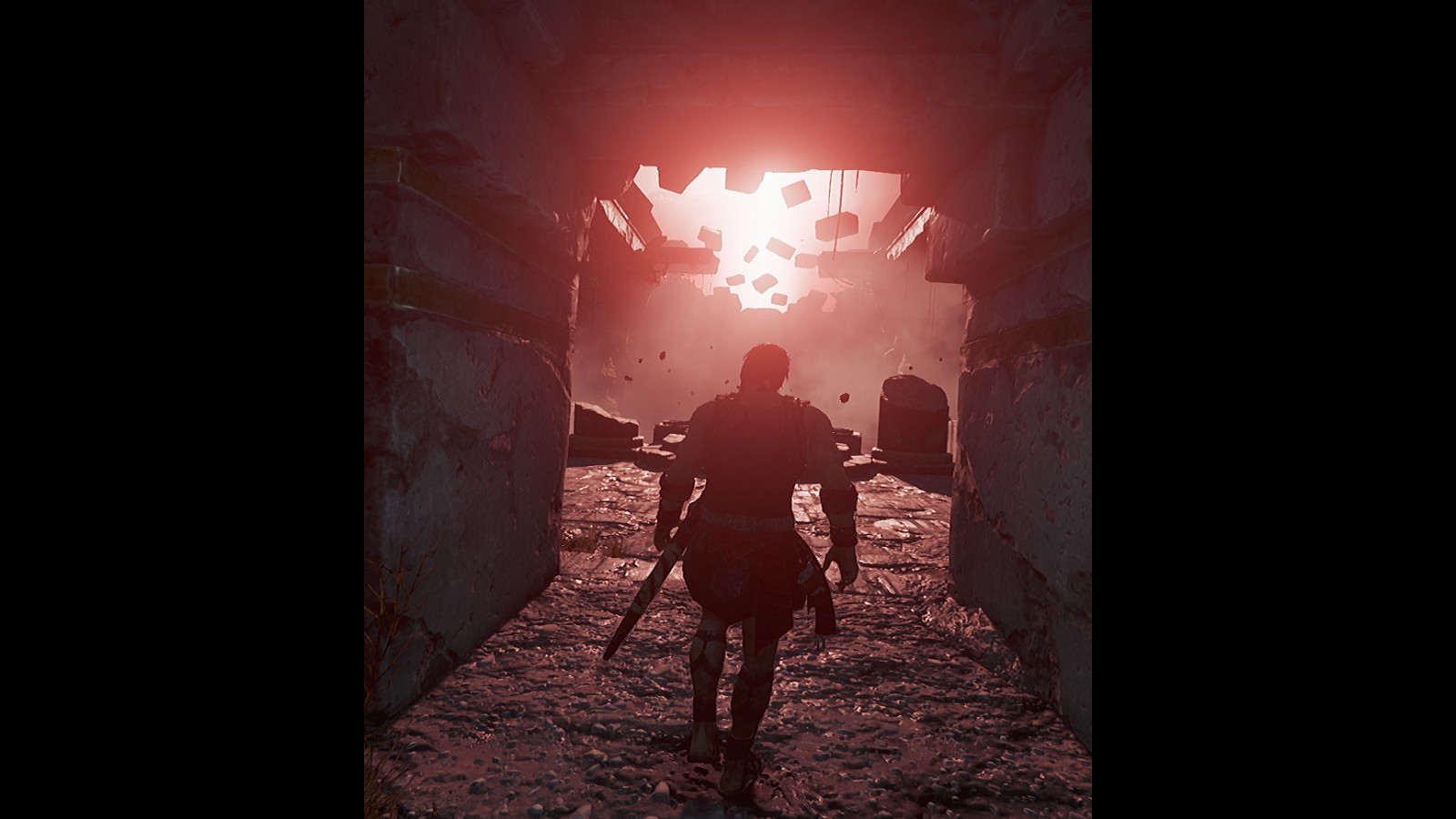 Theseus is an impressively presented game. The contrasts of light, dark, and color are intricately designed and beautifully rendered, while the great sound effects, excellent music, and the not-quite-speech of Ariadne complete the picture. It is a work of art. As a 3D sort-of action platformer it’s quite good, too, though the choice of fixed camera positions for much of the gameplay does detract from the VR experience somewhat, not to mention adding to the frustration.

But it’s rather expensive and very short. Though I still recommend it even so, I’d suggest maybe waiting until it’s on sale.

Note: I played this game using VRidge / Riftcat and an Android phone with Google Cardboard headset.