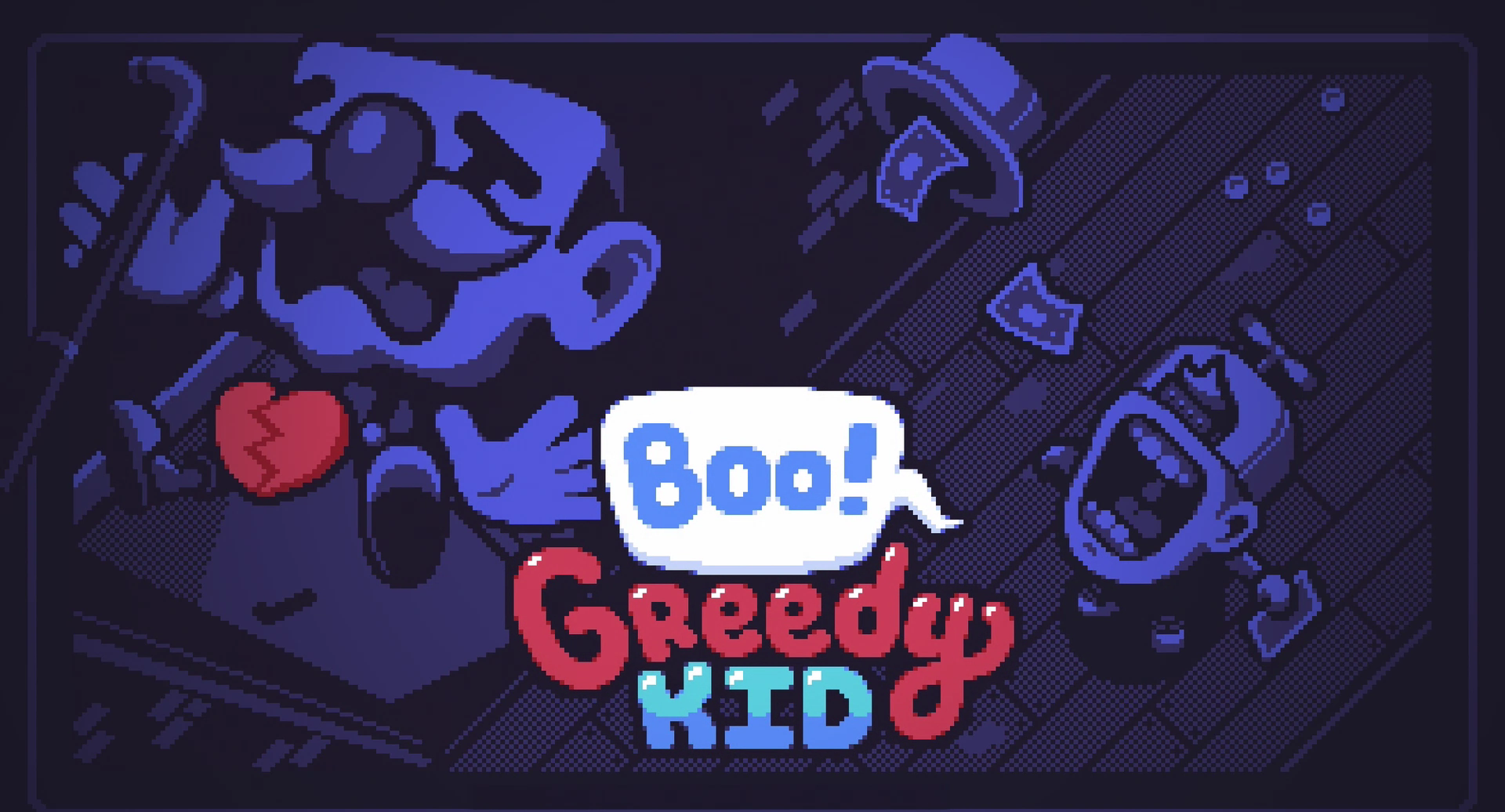 Boo! Greedy Kid is a casual indie puzzler with a very simple-to-understand, yet challenging levels.

One day, you ask your father for some change to get that can of soda you really want from the vending machine. Your father declines your request in a rather impolite way, causing you to lose your temper, scare him to death and collect his money. As it turns out, you still don’t have enough, which means that you have to do the same to everyone in the 99 story building you reside in as you did to your old man.

First of all, I would like to mention the really cute intro. It is here where the game teaches you the sneaky tactics you will be doing for the next two hours: scaring someone from behind until they die of terror. The controls stay the same for the rest of the game – the only thing that changes is the difficulty, which steadily rises through the 99 levels (with the occasional spikes).

The controls are quite clumsy if you don’t play with a controller – everything is cramped together on the left side of the keyboard. Luckily, the Settings menu allows you to change all bindings to whatever you prefer. I have one more complaint regarding the controls: the game never tells you how to do a roll. You are simply shown that you have to sneak past the policeman somehow, but you are never told directly that you can simply roll past the enemies. I was stuck on the 10th level for quite some time before I noticed that there is indeed such a thing as a “dodge roll” in this game. I opened the keybinds menu, where I finally discovered that pressing Q does the trick. Playing the game suddenly became much easier.

I’ll focus more on the gameplay now. Since just scaring a ton of people to death is obviously too easy, there are also different enemies who are able to harm you. There are two types of police officers – one charges at you until he hits you and the other one shoots at you. You have three lives available, which means that you can only take two hits until you die. Some people also have more than one life. After you scare them, they start raging and running around. If they hit you while in “rage mode”, you will lose a life. In some of the levels, you might also encounter doctors – those do not need to be scared to death in order to progress to the next level, but they can bring the scared people back to life if they see one. Doctors have two lives and if you kill them, you get a one heart recharge. 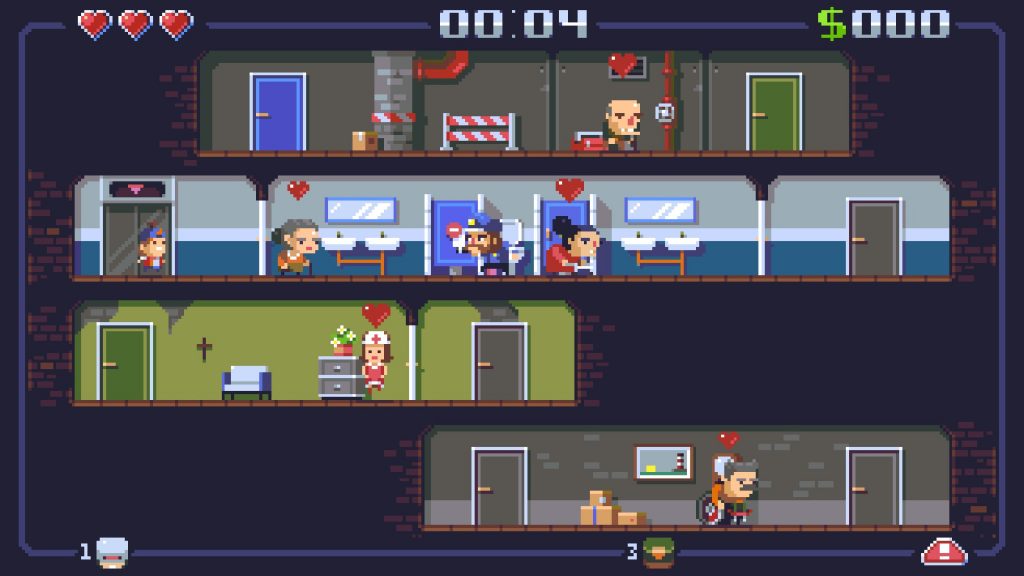 In later levels, you will also encounter the SWAT units – a much more dangerous form of police officers. Their ability is to climb up and down between floors without having to use the door, which means they can sometimes trap you in an uncomfortable and unpredictable spot. Still, they aren’t much of a nuisance once you get used to them. Robot-cops, however, are a nuisance. They only appear in about five levels, but they are much harder to pass. They will shoot at you on sight with an extremely fast bullet which kills you in a single hit. These levels usually include a lot of hiding and require perfect timing if you want to win.

Each level consists of multiple floors between which you can travel using doors. Two doors of the same color are connected and it can sometimes be tricky to find the right path to the last remaining living person while trying to evade the police. After each level, you are given one star by default. The remaining two stars can be obtained by getting to the exit elevator in a small enough amount of time and getting all of the possible money from the levels. In most cases, getting the money isn’t that hard. However, trying to finish in the required amount of time is usually quite demanding, especially when you have to deal with robot-cops.

After beating every single level, you are taken to the final cutscene. Personally, I was quite disappointed with the ending. My best guess is that to get a better ending I would have to beat every single level with 3 stars, which I certainly do not intend to do as some levels have quite unrealistic demands.

For those who love achievements, this game offers 20 of them. The ones I got were fun to achieve and weren’t too difficult. Be aware, however, that in order to get every single achievement, you will need to beat all levels with all three stars. 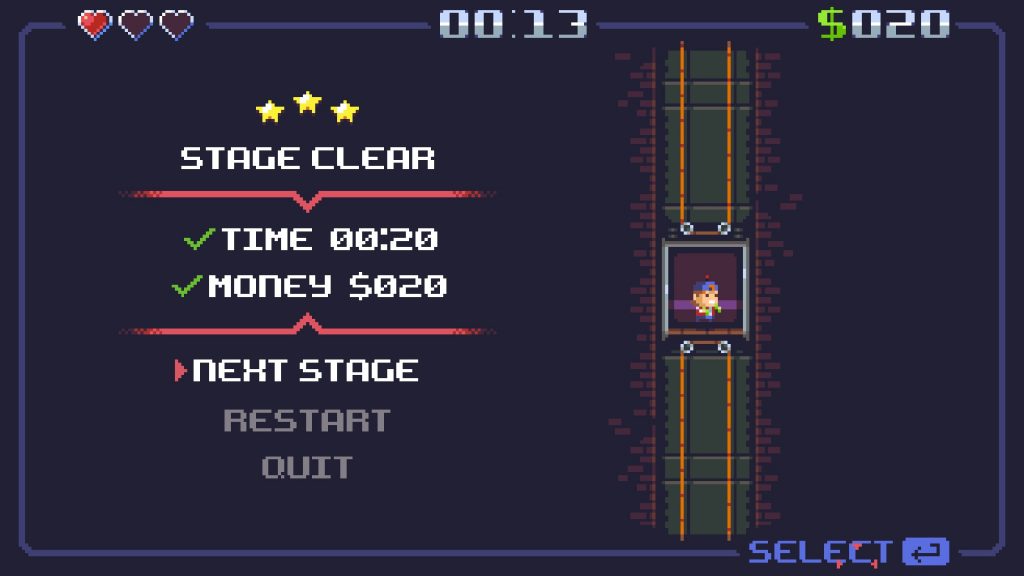 If you love creating your own content and sharing it with your friends, this game also supports Steam Workshop. After subscribing to user-made content on Steam, you can make it accessible in the game from the main menu. When you launch the game, you are also given the option to use the included level editor. I opened it and played around with it for a minute or two just to see if it works and it looks like a good enough tool for making the levels for this game.

Finally, I would like to mention the soundtrack and the graphics. Boo! Greedy Kid is really a gem when it comes to that. The exciting, yet repetitive music puts you in just the right more for scaring people and the graphics are certainly worth looking at.

Overall, I have to say that I enjoyed this game. The levels were just challenging enough for me and, assuming the player want to, trying to get every single star is certainly a goal which would require even more patience and grind.

Although I had absolutely no problems at all with the controls after changing them in the menu, I have to say that I feel a bit disappointed how the game didn’t inform me about the ability to do a dodge roll. I almost quit playing because of that since levels were becoming too difficult to beat without rolling past the enemies.

If you like playing casual games and just want to have some fun, Boo! Greedy Kid might be the game for you. I completed all the levels in about two hours without repeating too many of them. I’m not too sure about the $5 price tag, but you should consider purchasing the game should you ever see it discounted.