One of the latest in a very long line of Early Access survival-crafting games, Escape the Pacific claims to be the most advanced and realistic of the lot. It’s not, or at least not yet, anyway.

Escape the Pacific is the debut title from indie developers, Gamers4Gamers Team.

Though the game is currently in very early Early Access and all of the story-related elements are yet to be implemented, from what I can gather from the Steam store and the game’s web site, it’s set in the early 1800s in — you guessed it — an island archipelago in the Pacific Ocean. You play a castaway who must use his or her wit and skill to survive and somehow make it back to civilisation.

Though the title screen looks amateurish and rather bland, once it disappears and you’re left with the main menu overlaid on a lovely rotating full 3D view of a procedurally generated island everything starts to look much better. 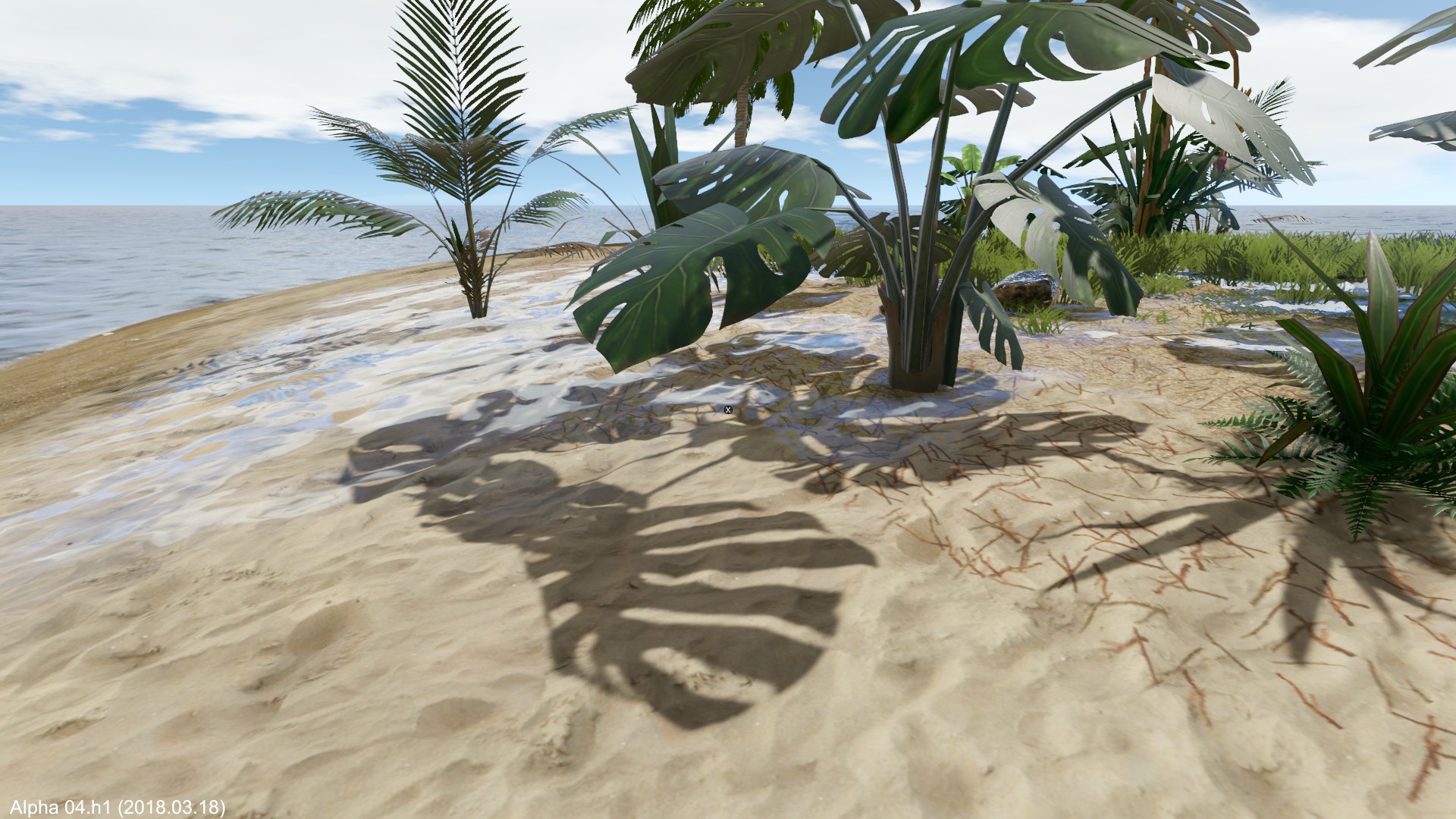 The ocean waters look great at first sight, with convincing texture maps and wave-like undulations. Underwater, too, looks pretty good, though the sea floor doesn’t look quite realistic enough, and there’s not a great variety of sea creatures. The islands are stereotypically beautiful, but very small, tropical islands, procedurally generated in size and shape, but with only a very small array of differing flora and fauna types. The day/night cycle is quite nice, but the weather effects are disappointing; rain falls from a sky completely devoid of cumulonimbus or nimbostratus, and the wind, though apparently variable, seems to have no noticeable effect on the ocean waves. I also didn’t notice any significant tidal changes. 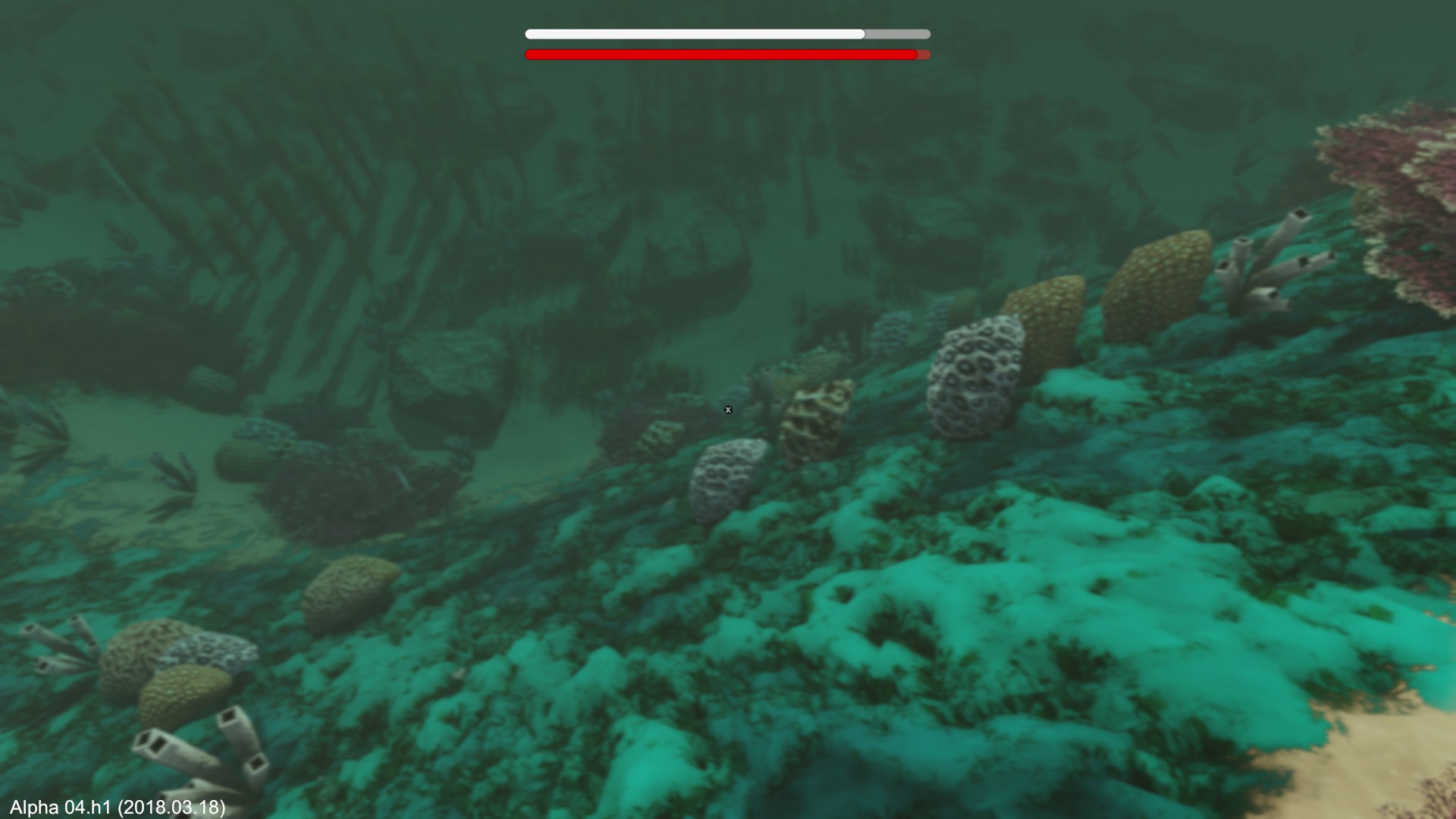 The single available player character model looks okay on the character selection screen, but shadows show that animations are almost completely lacking. The only fauna I’ve seen moving are birds and fish, and the fish often swim a couple of feet above the ocean and land. 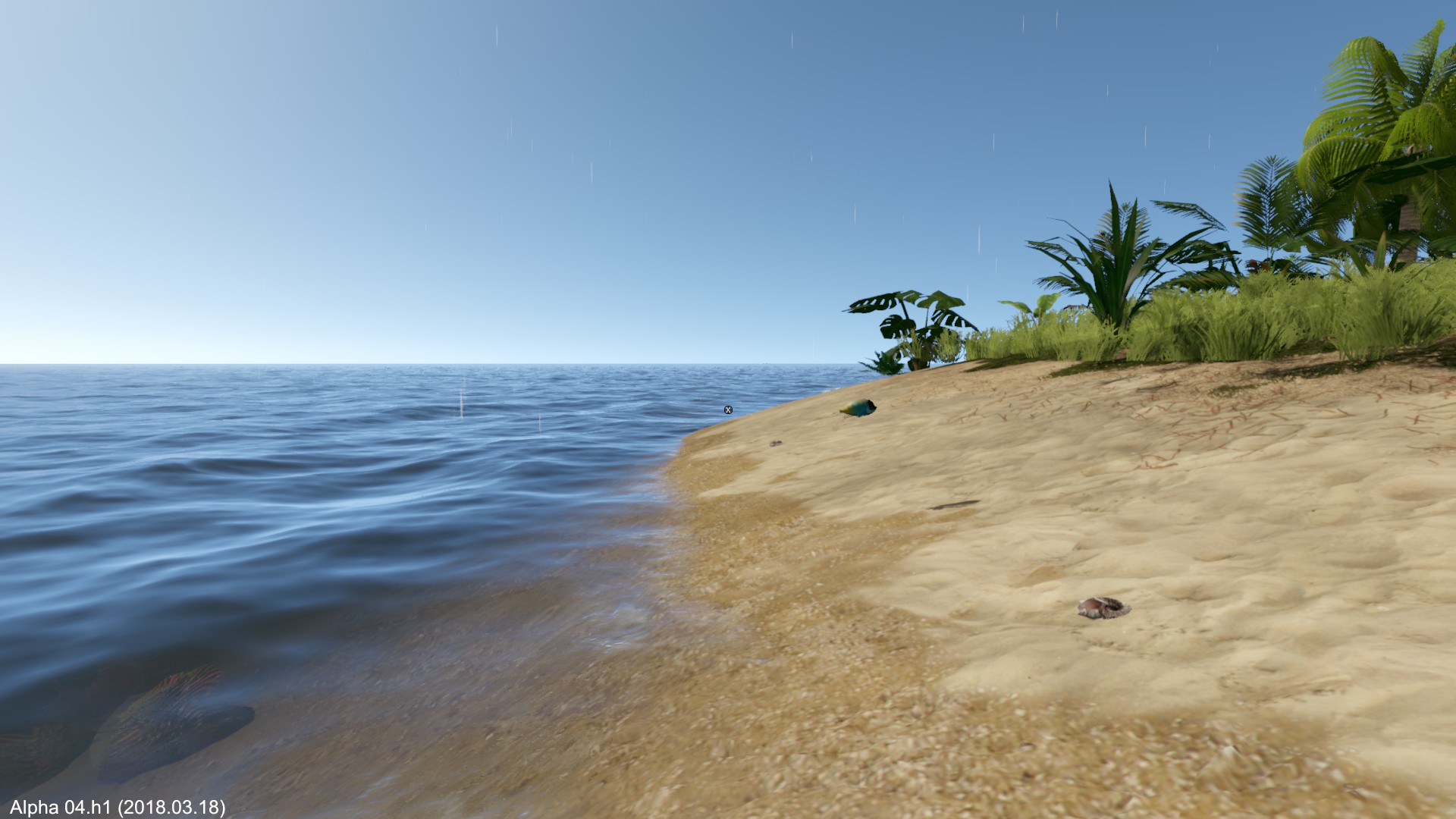 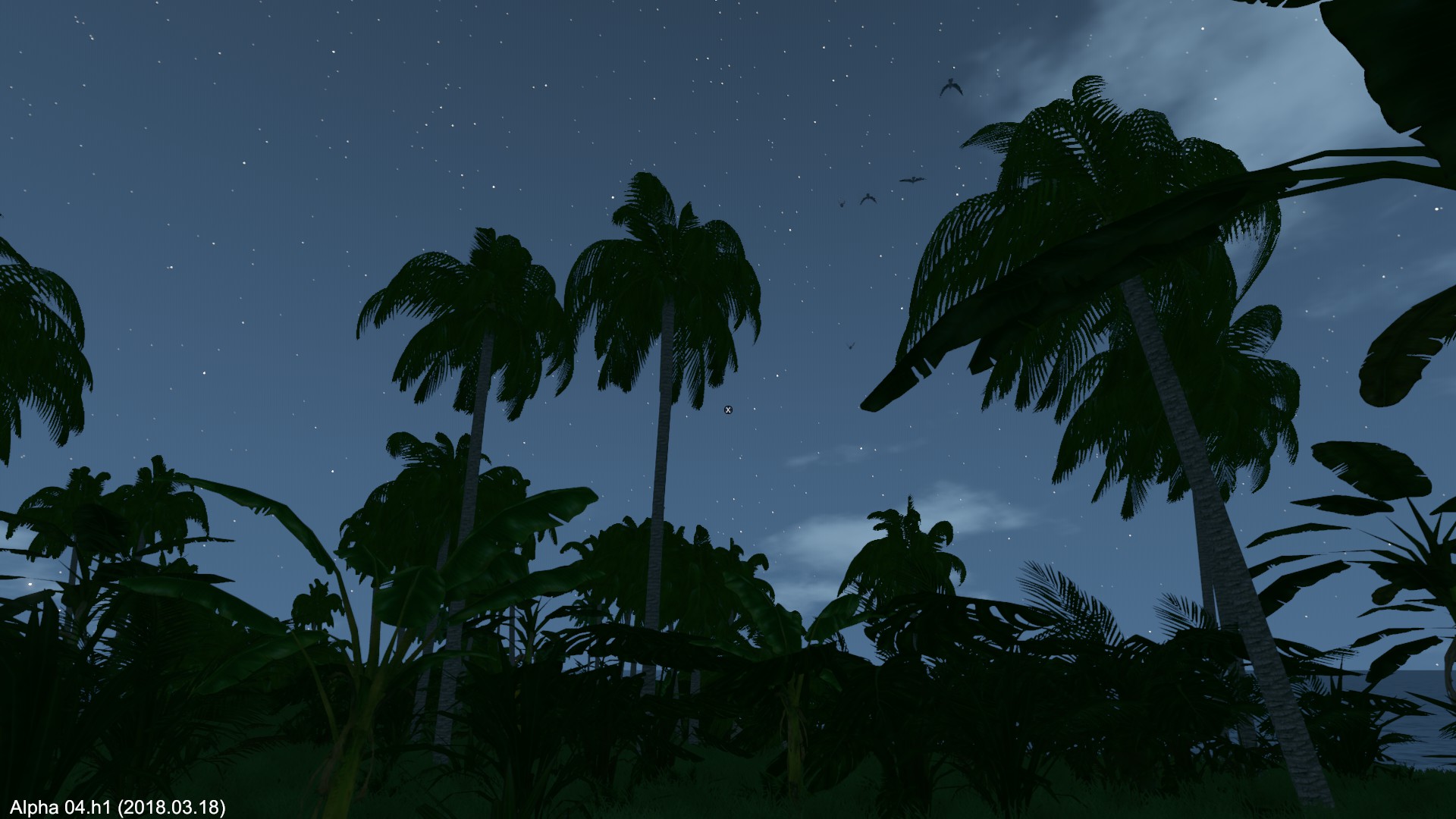 The user interface is quite bland and could do with a few tweaks here and there, but it’s basically functional. Many options and features are greyed out and unavailable. The crafting and building screens look decidedly lacking in content for a survival-crafting game, and crafting seems a little weird at first, requiring you to place blueprints in the world and then hit them with the materials and tools required, but it doesn’t take too long to learn how to use and it works well for a game with a tiny inventory. The ‘usage’ icons you can display when highlighting certain objects are completely meaningless to me. Grammar is terrible and the in-game text has more typos than you can shake a (dry) small stick at. Hit detection is a bit off, making it hard to select some objects in the world. 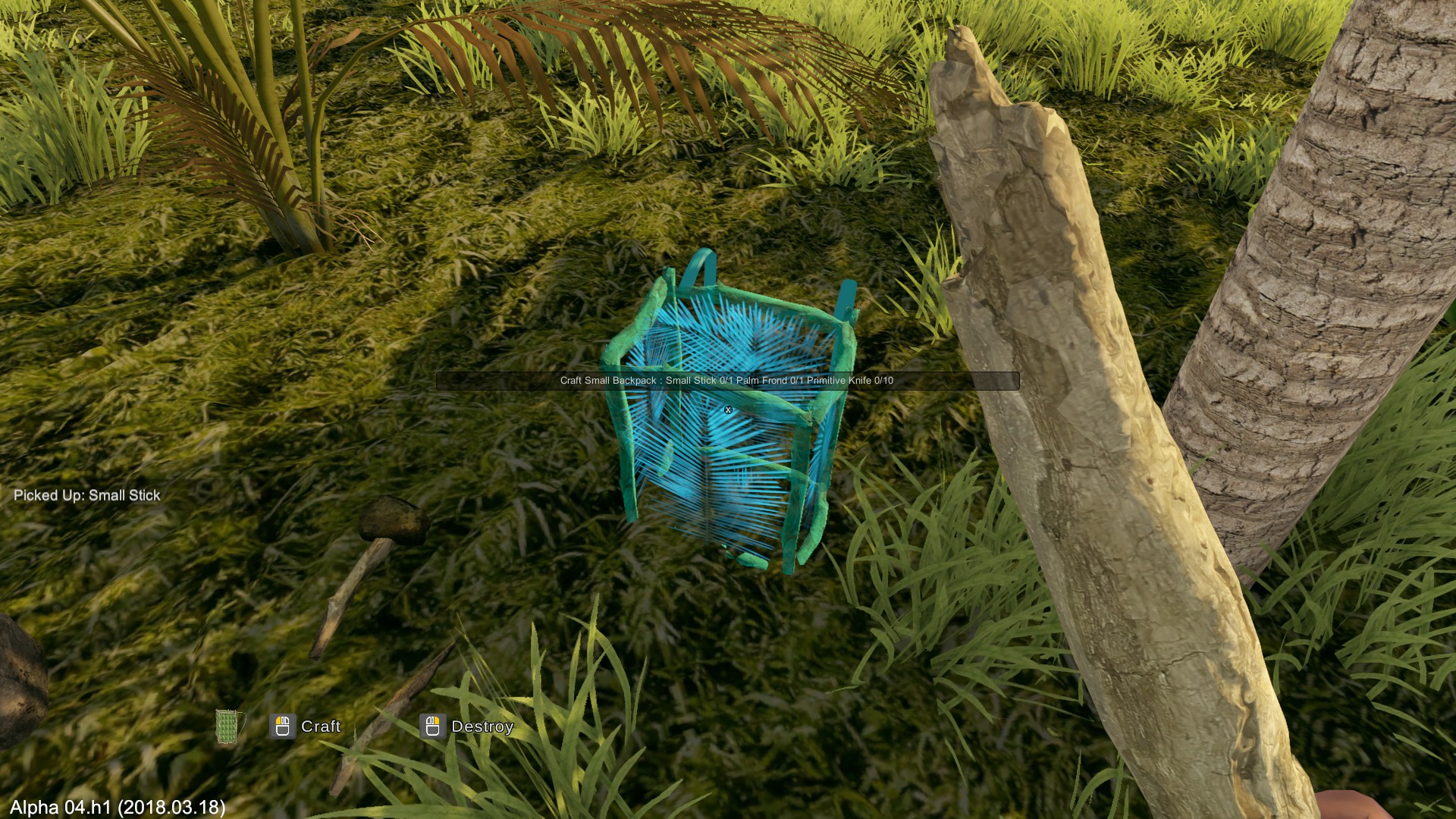 Sound is lacking, with only a few quiet environmental sounds and some poorly normalized sound effects; drinking seems particularly loud. There is no music and no speech.

The standard Unity launcher is displayed when you start the game, allowing selection of windowed or full-screen mode and a single detail selector. There’s no vsync, which is always a bit disappointing, and no in-game options for anything (yet). There’s some pretty terrible z-fighting on some objects; the palm frond roof is the worst.

Escape the Pacific currently plays like a rather simple survival-crafting game. Of the various planned game modes — sandbox, story, challenge, multiplayer, and sailing school — only the sandbox mode is implemented, and the survival elements in it seem to be inactive; I’ve been running on empty food and water for days of game time with no ill effects. 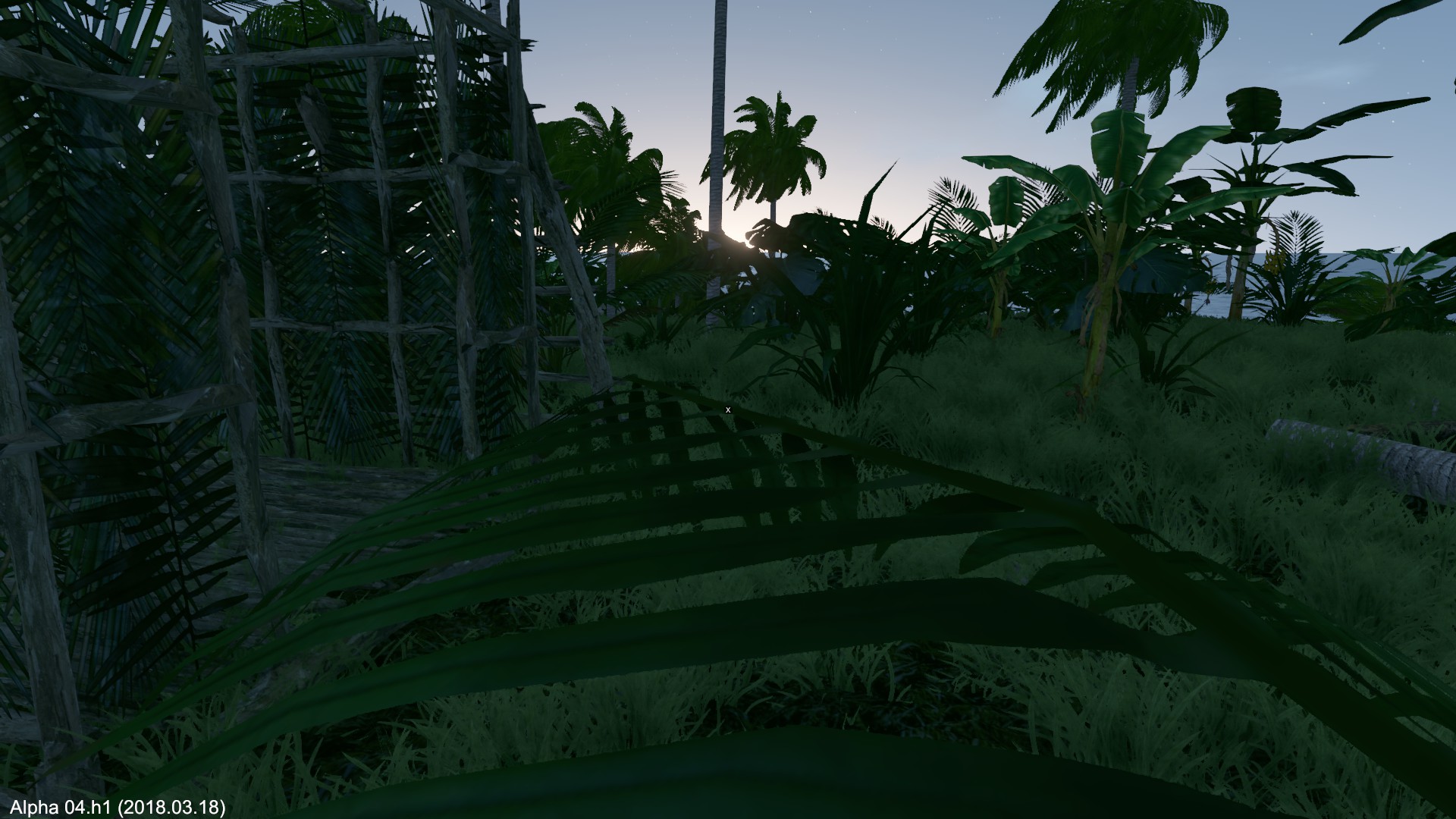 When you begin a game you choose a world seed and the game generates a starting island and archipelago around you. Though the game doesn’t feature a proper tutorial, there are pop-up hint boxes that appear the first time you try to do various things, explaining some of the intricacies and oddities of the interface and game systems.

For anyone familiar with any other recent 3D survival-crafting games, though, you should be able to work out most of it as you go anyway. In standard fashion you initially search for basic resources — wood and rock — then craft basic tools: an axe, hammer, and knife. There are no aggressive creatures in the game, so each of these tools is actually just used for certain actions on world objects, such as skinning coconuts, chopping down trees, or building items. From there you can craft inventory expansions such as a backpack, and begin to build up a structure in which to while away the hours. There’s little else to do in the game’s current state, and the crafting and building options are currently very limited.

The game’s physics are sort of cool, making chopping down trees rather fun, but the engine also seems to randomly make dropped items (including large ones, such as your raft) fly through the air completely unrealistically. There also seem to be some problems with ramps; you can build one, but you can’t walk or climb up it. Instead you have to jump and keep getting stuck in the model geometry. 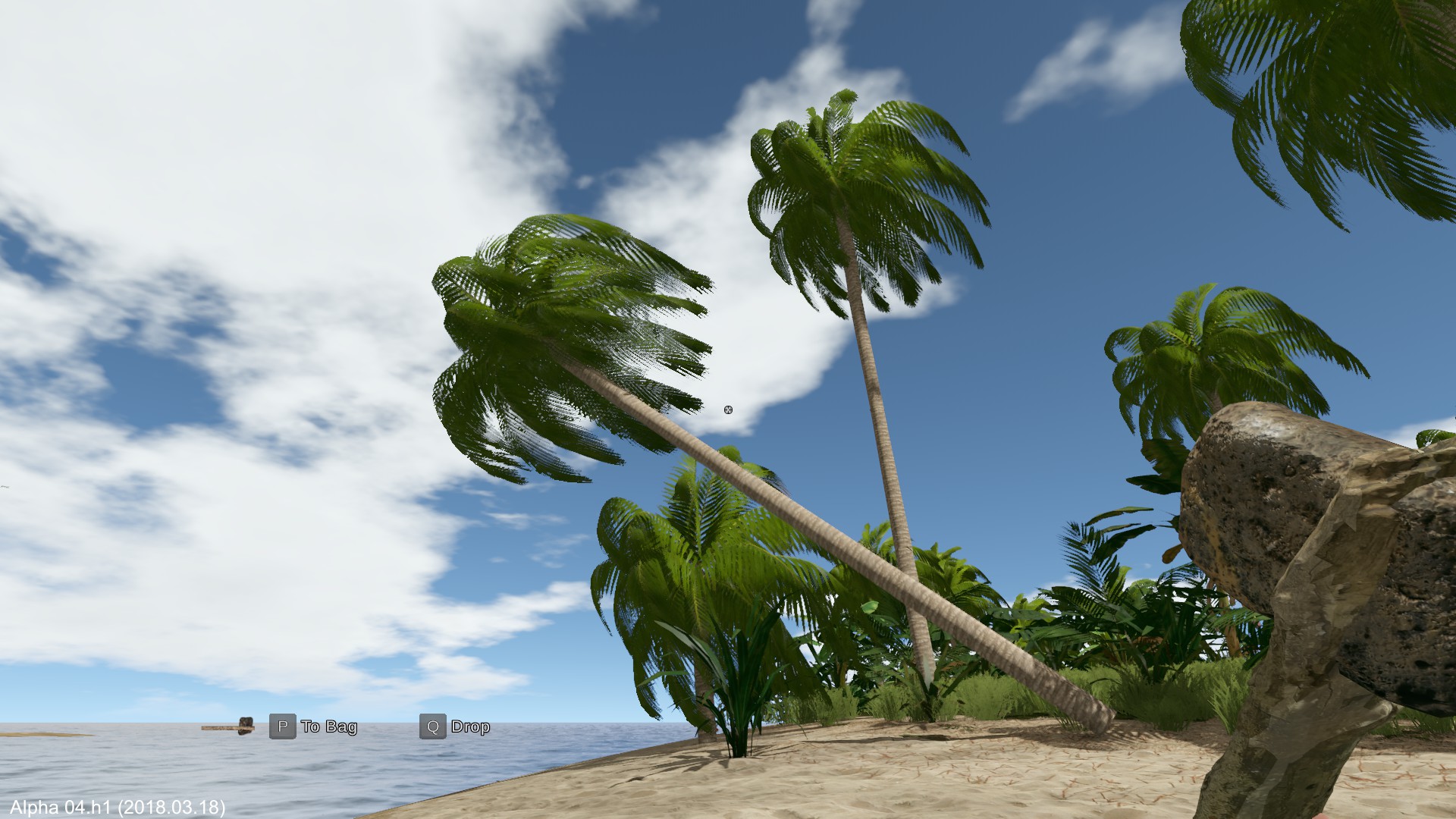 The description on the Steam store page claims that the game is the “most advanced and complex survival game to date” and has “realistic sailing”. I’m sorry to say at the moment I just can’t agree with either of these things. The survival parts of the game don’t yet work properly and what is there is extremely similar to most other games in the genre. The sailing is currently completely erratic, seeming not to correspond to any visible wind effects (e.g. palm frond movement) and to be very unrealistic. My first attempt at setting out on the ocean had my raft behaving like Automan’s car, with no inertia and huge, instantaneous variations in velocity. Player inertia is also a bit odd, but in the opposite way: it takes a short time to stop once you release the W key while walking. Weather is also unconvincing.

Other than that there are countless bugs, this being one of the more broken Early Access games I’ve played. The developers have been working on the worst of the bugs since release into EA, but there are still some terrible game-breakers, with the worst being related to inventory management and saving and loading games. Be aware that it’s very easy to lose crafted objects — including those containing many other objects, such as your backpack — and saving and loading don’t always work properly. Other smaller bugs are often fixed by reloading and include issues with building, physics, and features (such as the inventory or saving) simply no longer working at all. 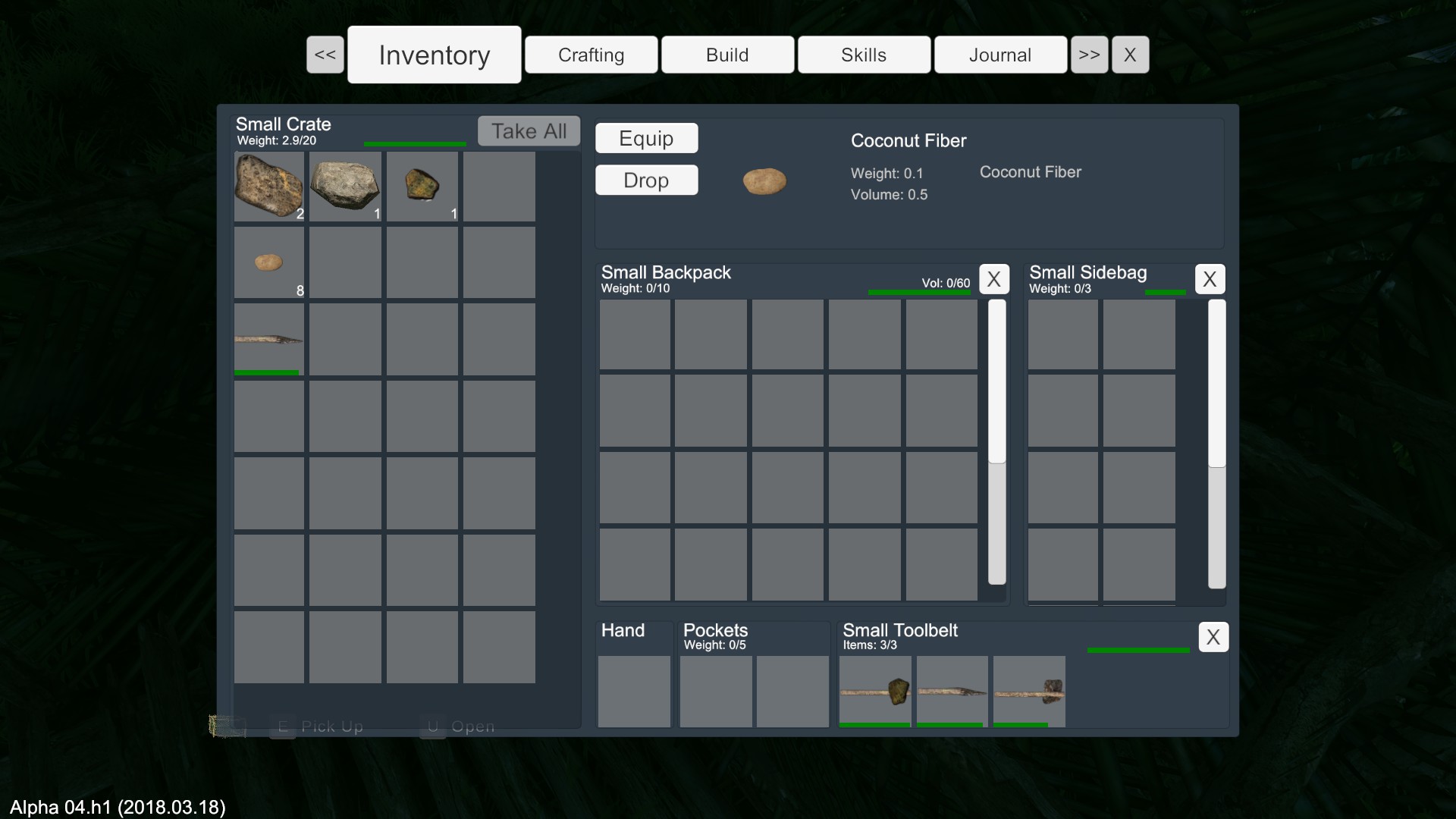 Escape the Pacific definitely has potential, but I can’t review what’s not there yet. At the moment the basic gameplay is mostly sound, though extremely buggy, but there’s just not much to do yet. After a couple of hours’ play you’ll have done everything you can do so far, even accounting for restarts and re-crafting items lost due to inventory and save issues. The much-hyped realism in climate, weather, and sailing is just not evident yet.

If you’re a survival game fanatic then you should definitely keep this one in mind, but I can’t recommend a purchase at this point.