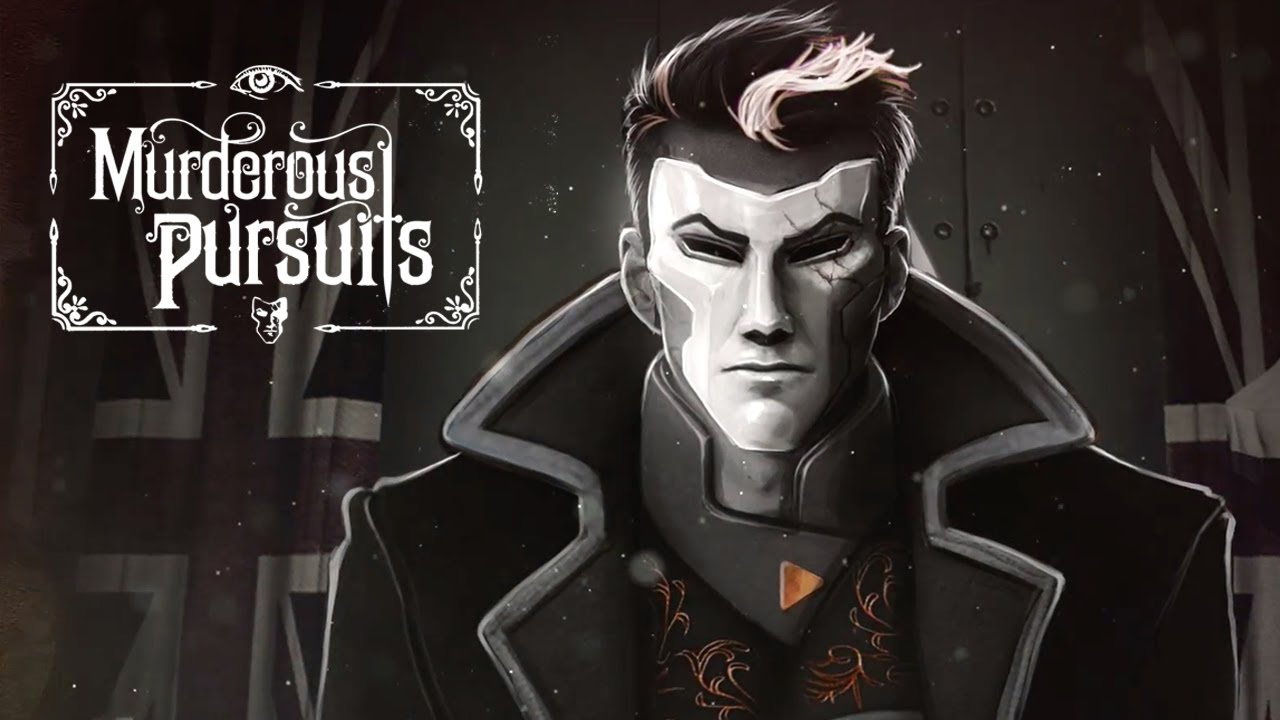 A murder party in a Victorian airship. Everyone is a suspect!… and a victim.

That ship is sinking

Murderous Pursuits is the latest game from Blazing Griffin, developers of The Ship. Between the Half-Life mod The Ship, the source game The Ship, and the remaster of The Ship, it does not seem like they are deviating from their initial murder party formula. Basically, players have to infiltrate a fancy social event and assassinate their target. There also was the game Bloody Good Time, in which the concept was losing its appeal as it was geared more towards simple Deathmatch.

That ship is flying

Murderous Pursuits could basically be The Ship 2 since it’s once more the same concept. Just like for the other games, players score points by killing the target that was allocated to them. A second player is tasked to kill the first player and a few points can be gained by unmasking the attacker before they attack. Here, it happens in a fearsome Victorian airship, carrying murderous members of the aristocracy. 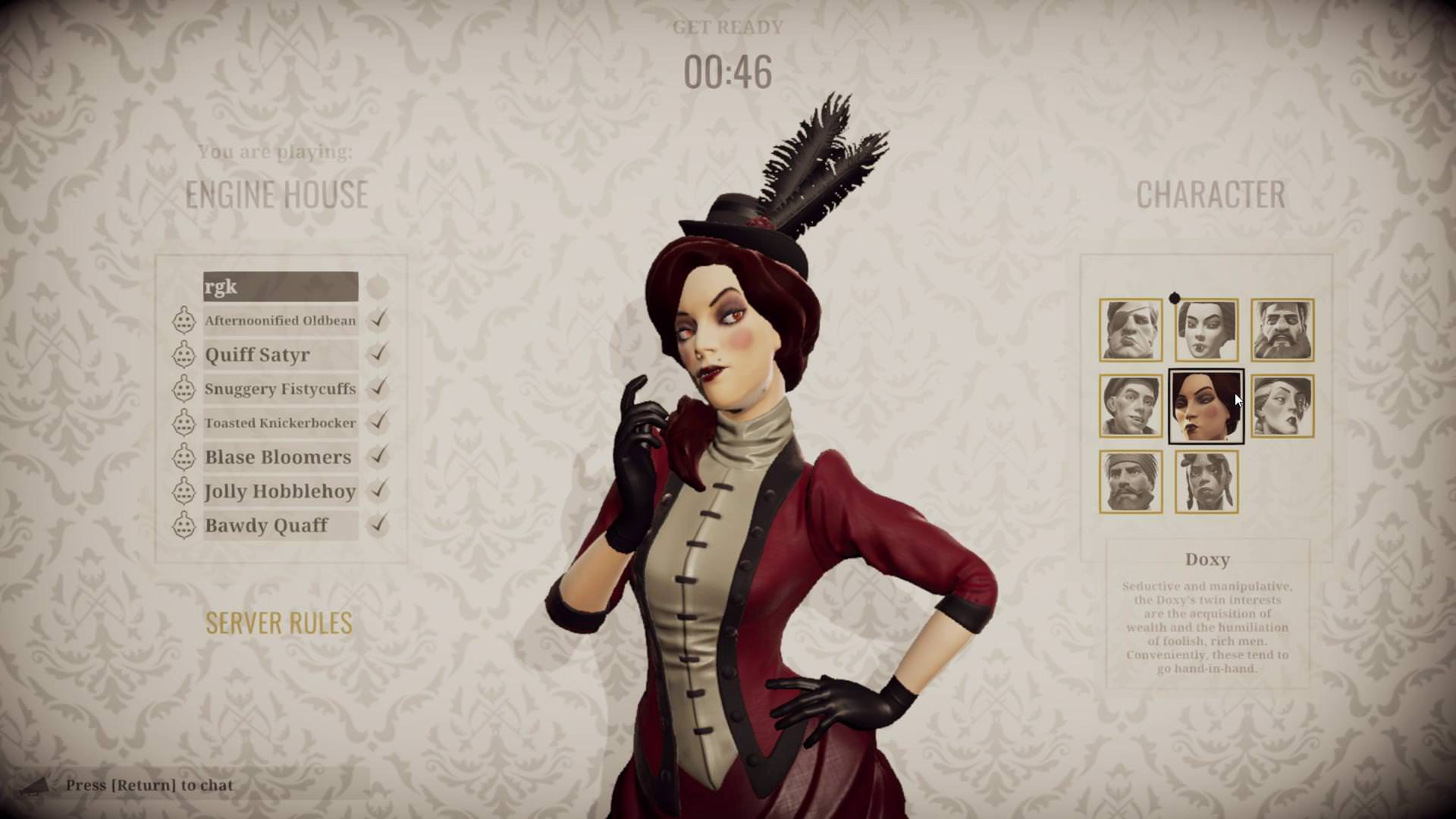 The compass at the top of the screen indicates whether the target is on the same floor or not and gives a direction. Finally, the compass tells us if they are in the same room, but it will never show directly who the person is. It then becomes important to observe the characters who come and go in the same room, and most of the characters are NPCs controlled by the computer and not players. Among the flow of people coming and going, there will eventually be one that will instantly trigger a change on the compass, and if you follow that person then the compass will change again. Great, you found your target. Actually, it is very quick and easy, the longest part being to walk to where the target is. Beware, as while you are hunting your prey, there is also a hunter after you. Thus, you have to keep your eyes on both compass indicators and watch the comings and goings to identify who you are after and who is after you. 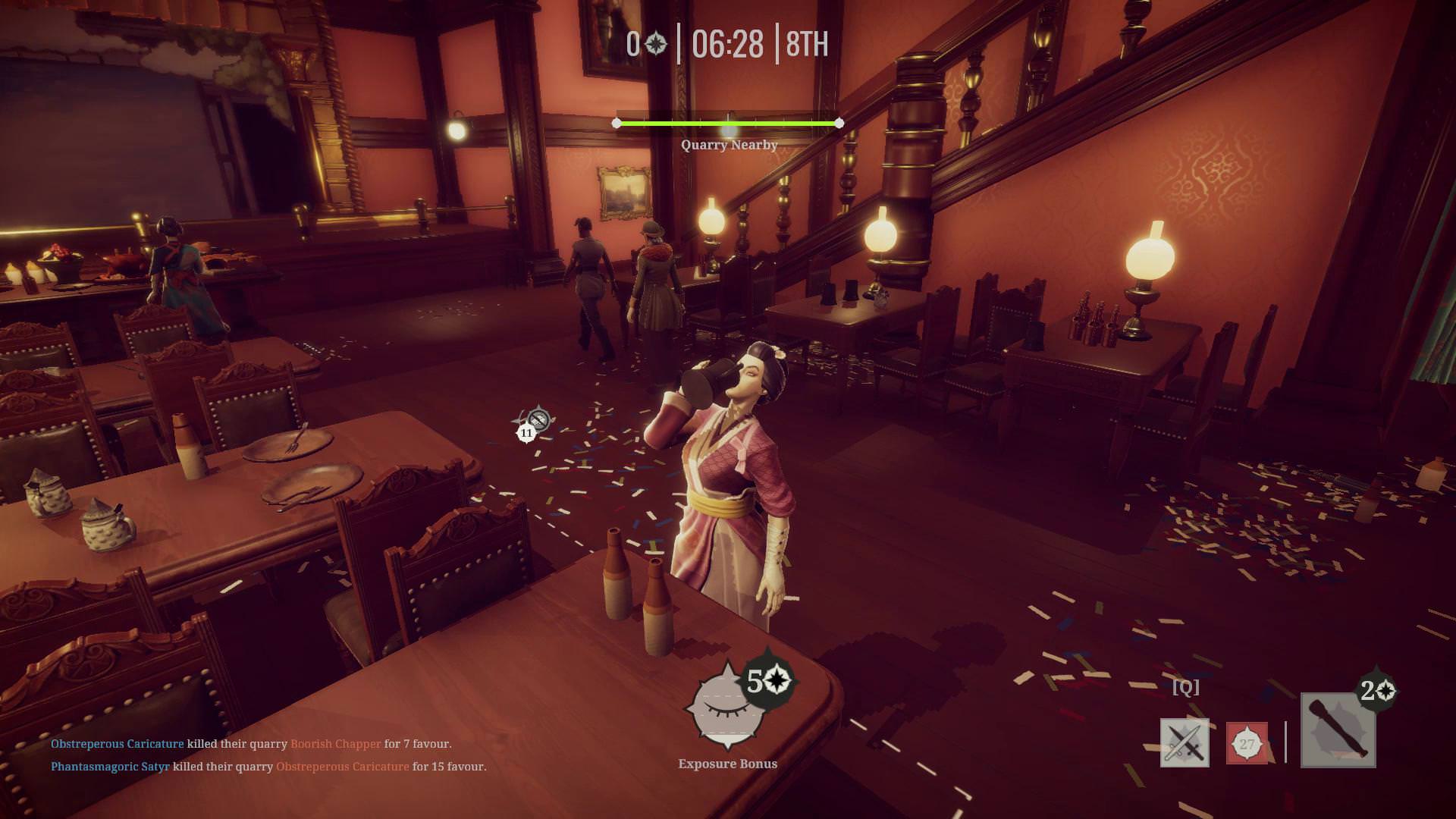 When playing 2D indie games such as Hidden in Plain Sight or Dead Drop, the aim is to see who behaves differently than NPCs. You have to analyze movement patterns while the target is trying to accomplish objectives under the nose of the sniper. Detecting a player can take up to several minutes. In Murderous Pursuits, it definitely does not happen like that. There is no point in imitating the AI or in detecting who is a player or not, all that matters is the compass and who goes in and out of a room. There is no police work, everyone is moving towards their target and it finding out who is who happens very quickly. The only question that remains is whether you can reach your target before your own hunter catches up to you. Almost everything else in the game becomes irrelevant. 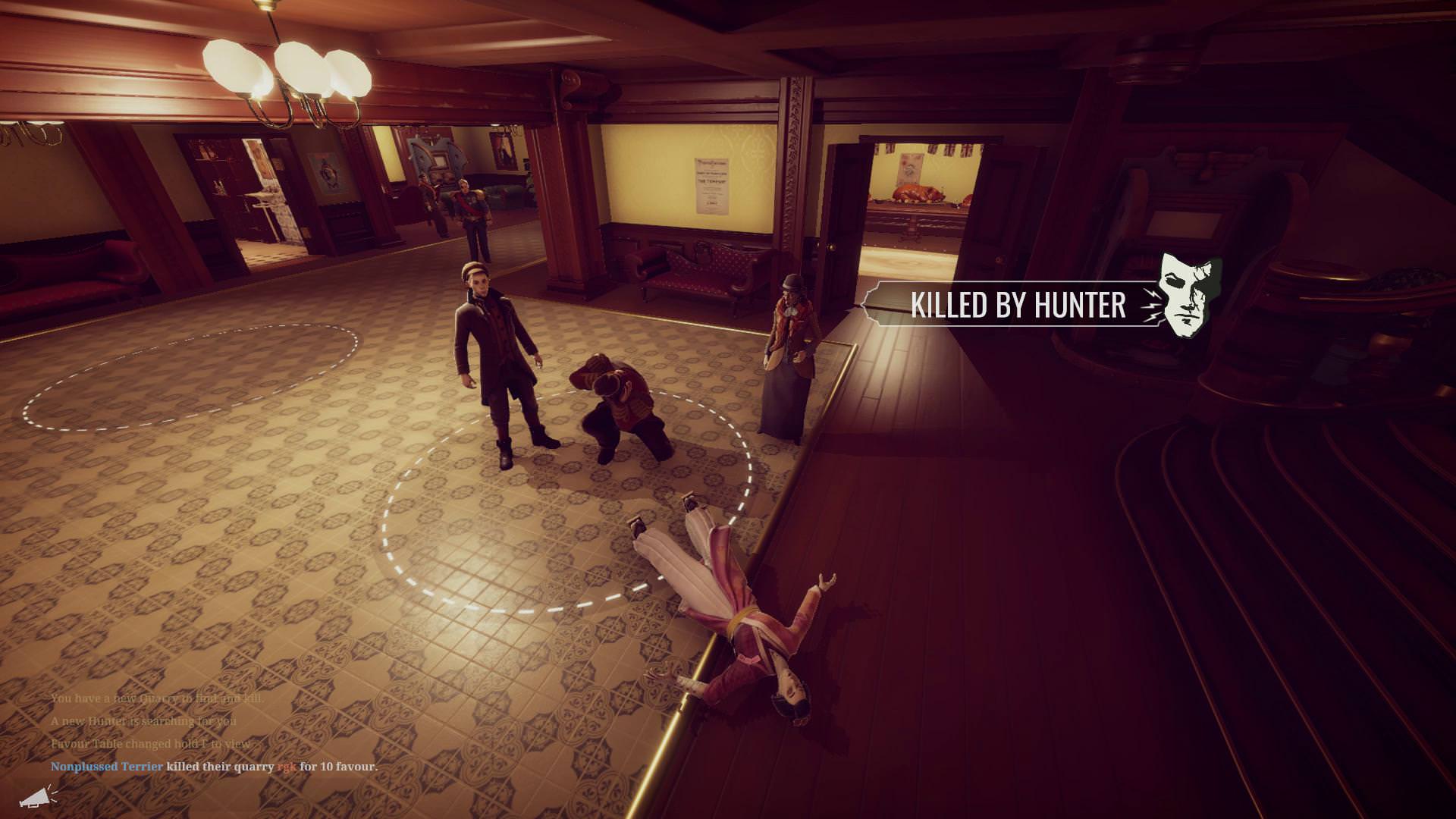 Thankfully it is not necessary to eat and drink, but there is still a meter to watch, it’s the discretion meter at the bottom of the screen. It is constantly emptying, which happens at a faster rate as you run. It reaches zero if you get the wrong target. In that case, when the meter goes to zero, you are revealed both to the hunter and the quarry, which is the worst-case scenario. To refill the discretion meter, you have to accomplish social interactions. In the game, it’s just standing in areas marked by dotted lines. “Wow, that painting on the wall is beautiful! I am definitely not a suspicious person standing next to the lifeless body of my last victim.”

To help with the objectives, players can pick two among several powers. Those abilities can only be used with moderation, as they require a loading time. Some are very useful, such as the one confirming whether the characters around the player are hunters or targets. Other powers allow to change disguise, to trigger a blinding flash, or to counter-attack an assassination attempt. 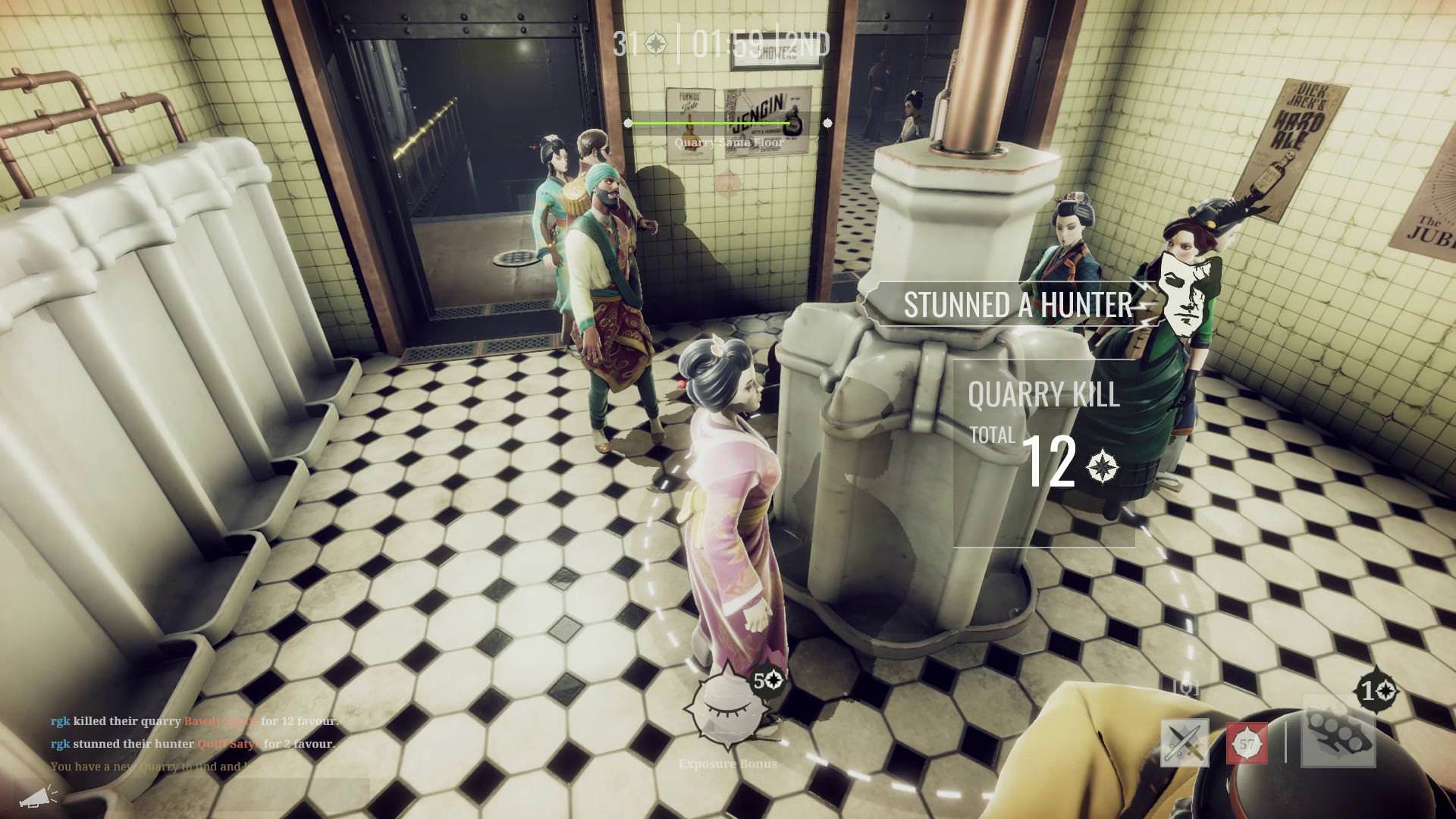 One of the biggest criticisms aimed towards the previous The Ship games was the lack of NPCs, but there are lots of them now. There are even very competent bots that can participate in the murder-fest instead of players.

There are several levels, but the level design can’t bring much to the table. On the contrary, it can be annoying to switch between floors. There are all kinds of characters each doing their own thing in their own world and no one cares about them.

In the end, the gameplay loop is not very appealing. It is so limited that it becomes telegraphed and repetitive within a few rounds or a few hours. Nothing impacts the flow of the action, it is very streamlined. 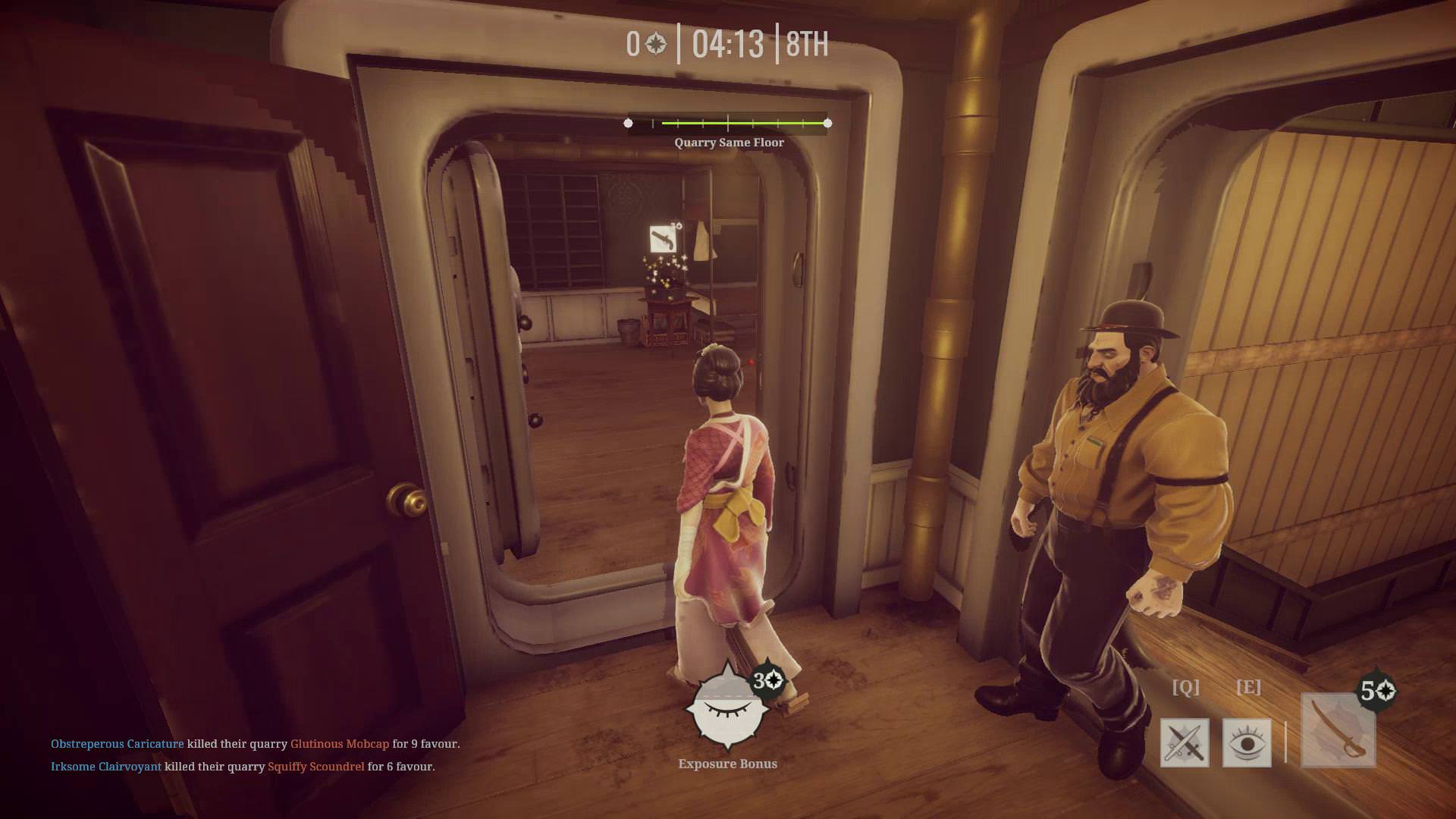 I thought that it might work better with less players, so we tried that and without the AI. The rhythm was a bit less fast paced, but we quickly realized that there was a big issue. Since we as a group were few in number, we were remembering very easily which character models the others were using, and we ended up recognizing targets and hunters with a single glance upon entering a room. The game does not allow character switching beyond the start of the game, so it was not possible to switch models to throw off the scent.

A little aside on the technical aspect, the graphics are very pretty. However, in my experience the framerate was not very smooth at anything but the lowest settings. 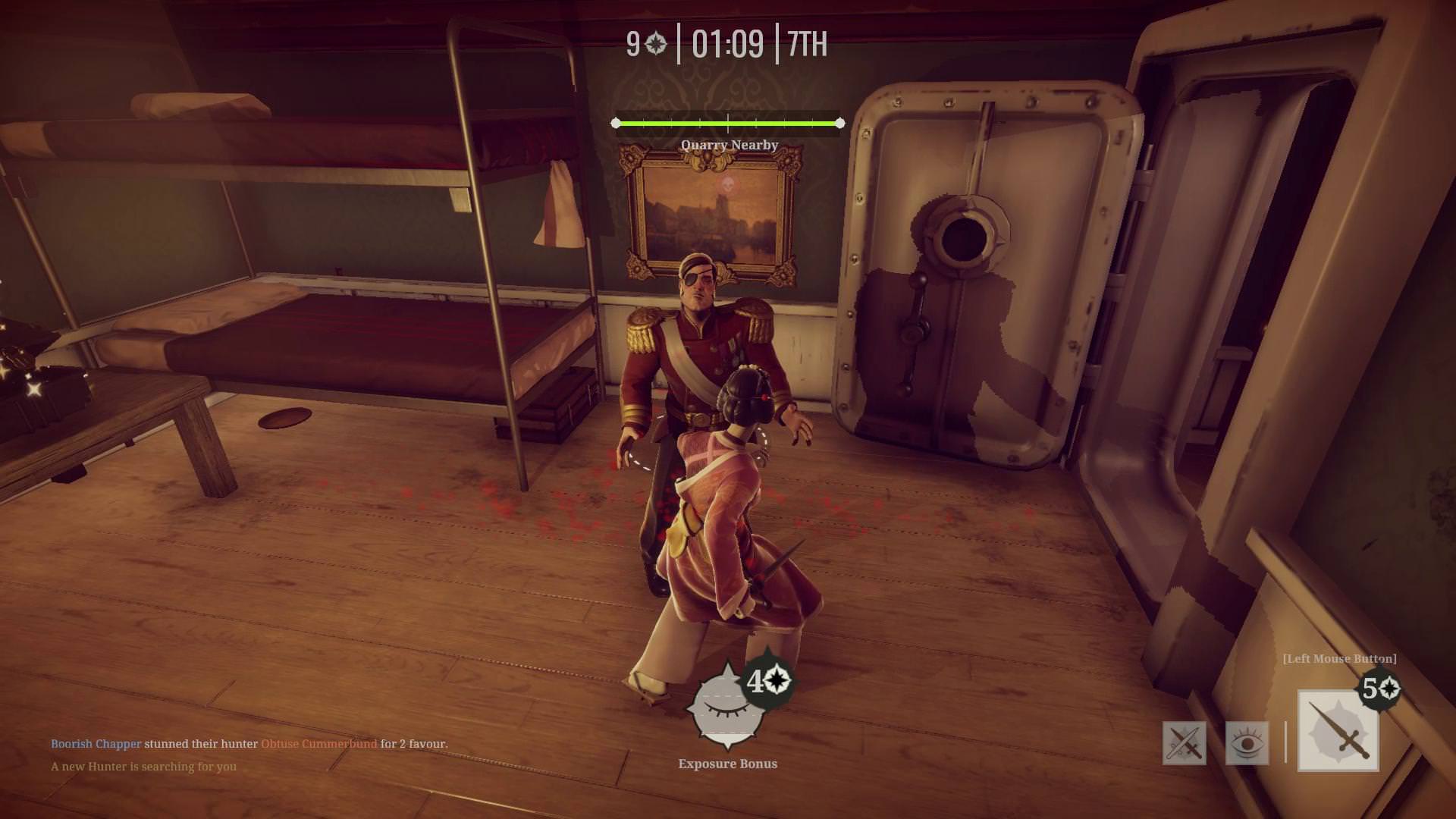 I dig the concept of these murder party games, I have always been fascinated by The Ship. However, there are always flaws in the execution that prevent these game from finding a considerable success despite the interesting concept. The game rapidly falls into a cycle of murders without any tension or surprise, or without any roleplay from the players. I would prefer something with objectives and predetermined spies and assassins rather than this carousel of murders. Murderous Pursuits is very likely the best game of Blazing Griffin, but unless it is released at a small price point for a few fun evenings with friends, I have trouble recommending it. This studio is steadfastly following the same format as before rather than spicing up the formula or proposing alternative game modes that could prove more successful than the base concept.