Stormworks: Build and Rescue is the debut Steam title from Sunfire Software.

Stormworks puts you in control of a one-man transport and rescue service in a procedurally generated island archipelago. Starting with a small amount of money and access to some basic boat-building parts, you undertake contracts to collect and deliver items and people to the islands and people in the area.

It’s not all smooth sailing, though. Bad weather can descend upon you at a moment’s notice, turning a lovely sunny afternoon’s cruise into a fierce battle against huge waves and strong winds as darkness sets in.

At first glance the game’s graphics look simple and unimpressive. Indeed, it’s true that for the most part the textures are bland and the terrain and models have very low polygon counts. But the game revels in this simplicity, with a large number of vehicle building blocks available — though not large enough, in my opinion! — some absolutely crazy character model components, and a game world that is deceptive in its primitive appearance. 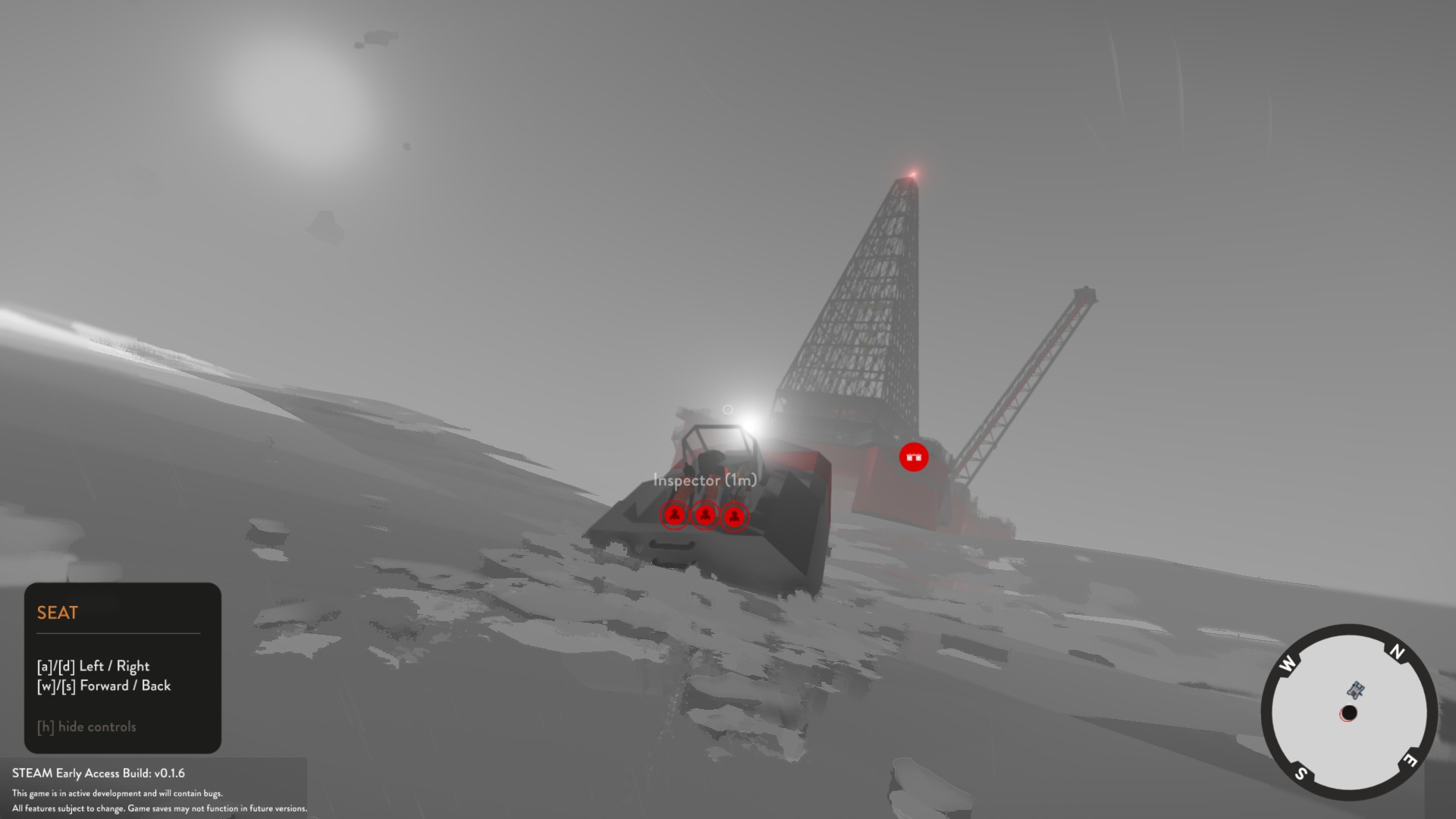 Water and atmospheric effects, including those produced by the all-important weather system and by the day/night cycle, are excellent. It’s truly surprising just how different — and impressive — a low-poly island-bound power plant can appear when approaching it on a relaxing afternoon or during a midnight storm. The graphics engine does a fantastic job of lighting, especially. 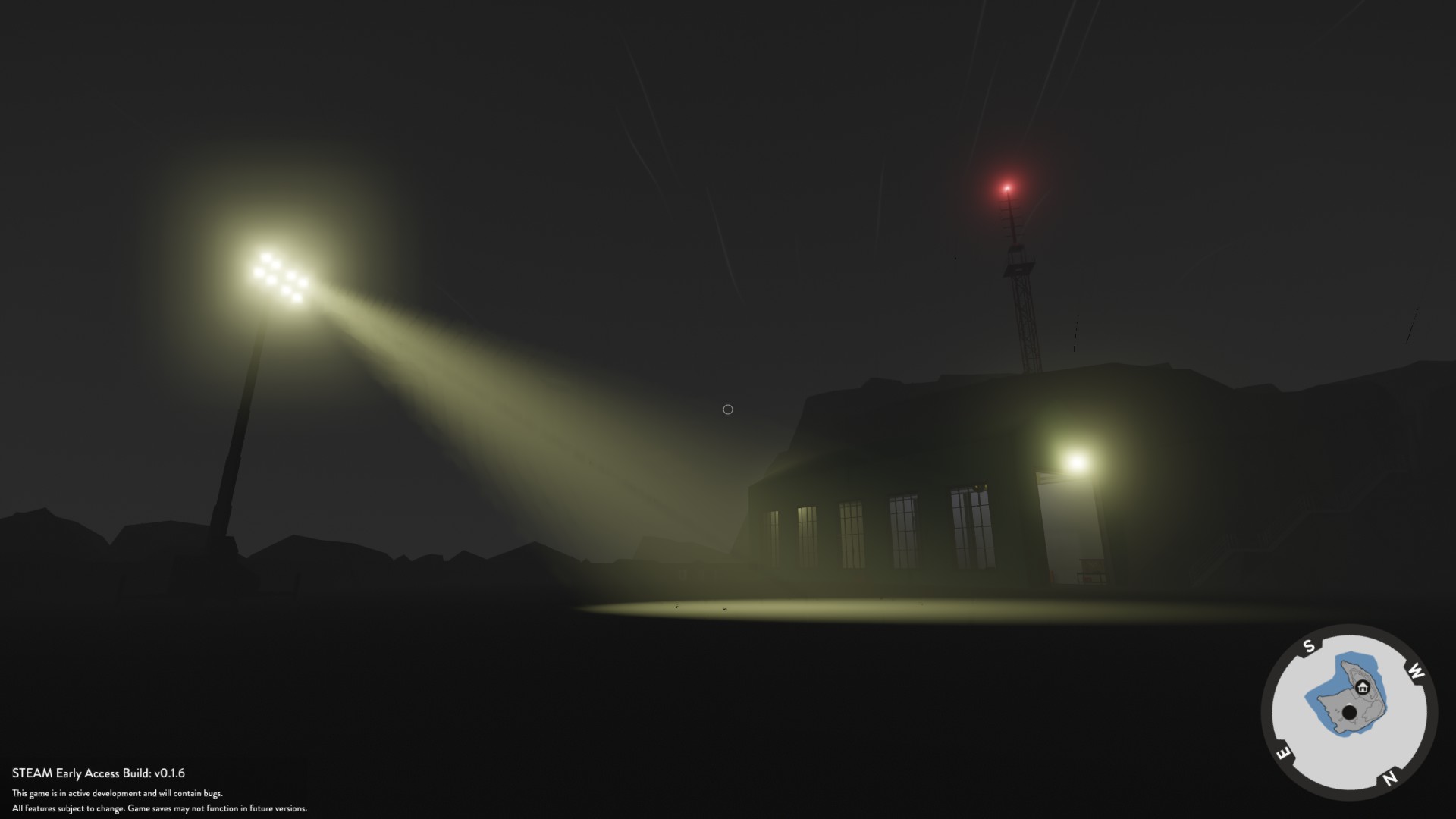 However, there are issues at times, with triangles flashing all over the place, and texture shimmer is often evident, especially at very close range. Clipping issues abound when you’re close to large objects or walls, and you may notice that the lovely sunset highlights shine through solid objects into shadow, which looks a little odd. Characters look ridiculous, which is intentional (I love the shark hat in particular!), but animations look a bit dodgy from third-person view, which is probably not. 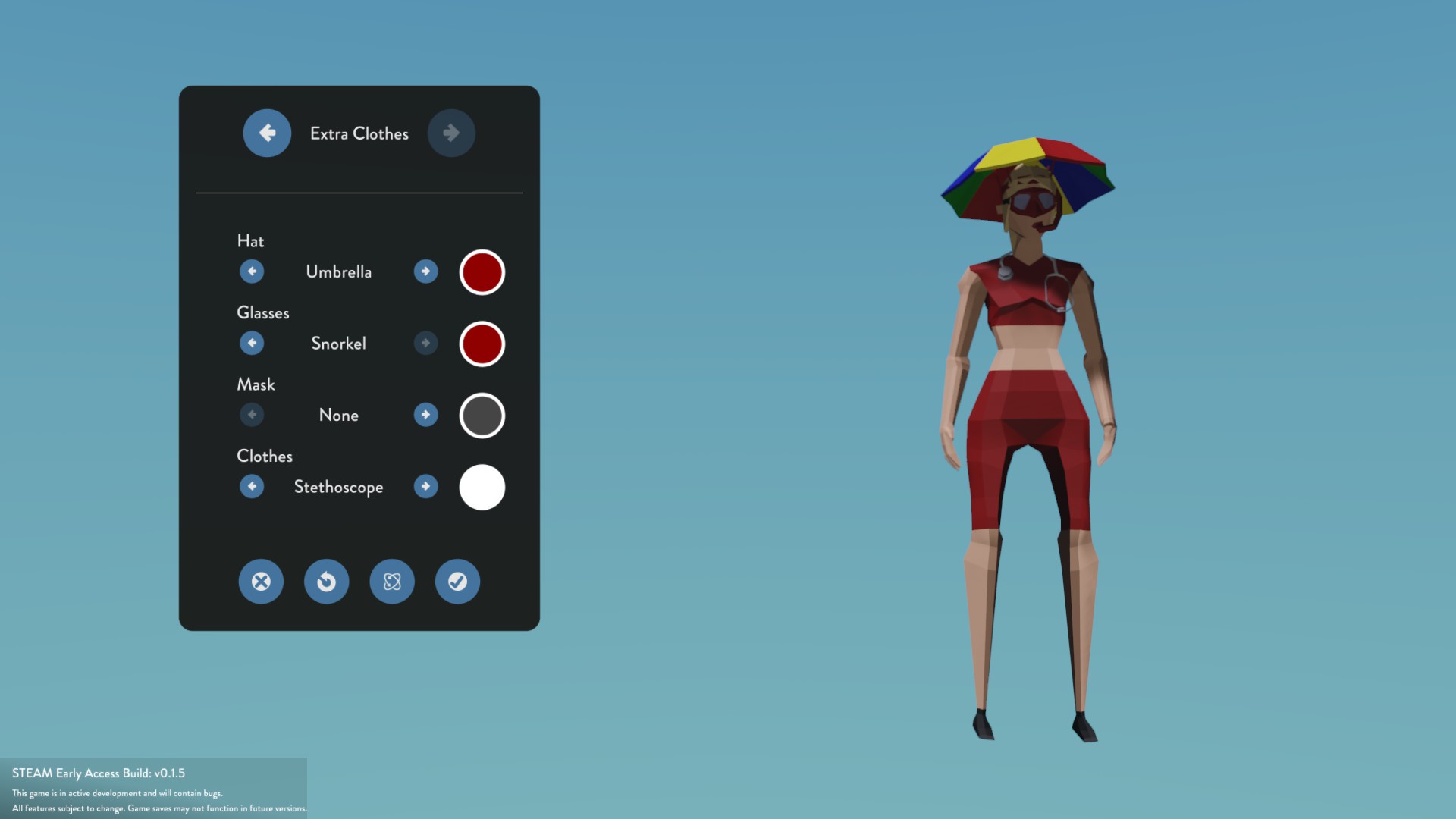 Other graphical improvements I’d like to see include more detail on the seabed — it’s currently very boring looking — as well as some variable water ‘fog’ so you can’t always see the bottom so clearly; more stars in the sky, considering the low level of light pollution; flora and fauna; and more people. At the moment the world is unexpectedly sparse.

Sound is not nearly as impressive as graphics. I think there’s only one music track, which is a sort of dramatic rescue scene tune; it fits the game well, but more variation would be great. Sound effects are okay, but not great either. The boat engine sounds are good, especially underwater, but the stilettos-on-concrete sound when on foot and you jump, regardless of the terrain, is pretty terrible. Environmental sounds are good, but could do with more; the ocean seems decidedly quiet. There are no voices.

You can change dynamically between first- and third-person views with free camera controls. The interface is mostly easy to use and self-explanatory, though I wish you could use ESC to exit from any screen. There’s a huge array of graphical performance options, too. I set everything to maximum and most of the time have no issues, but I do brief pauses when traveling sometimes; I suspect this is more to do with loading in the world than actually rendering it.

Stormworks currently offers two play modes: career and creative, allowing you to start with next to nothing and unlock money and parts through completed contracts, or start with unlimited resources and build whatever you want.

Creative mode is daunting with the array of parts on offer and little guidance in how to use them, but the few included prototype designs, together with the Steam Workshop support, provide you with examples with which you can tinker and extend. I’d like to see more parts on offer — and I’m sure they’ll be coming at some point — but as it is any keen designers can spend hours just playing around making weird and wonderful vehicles. 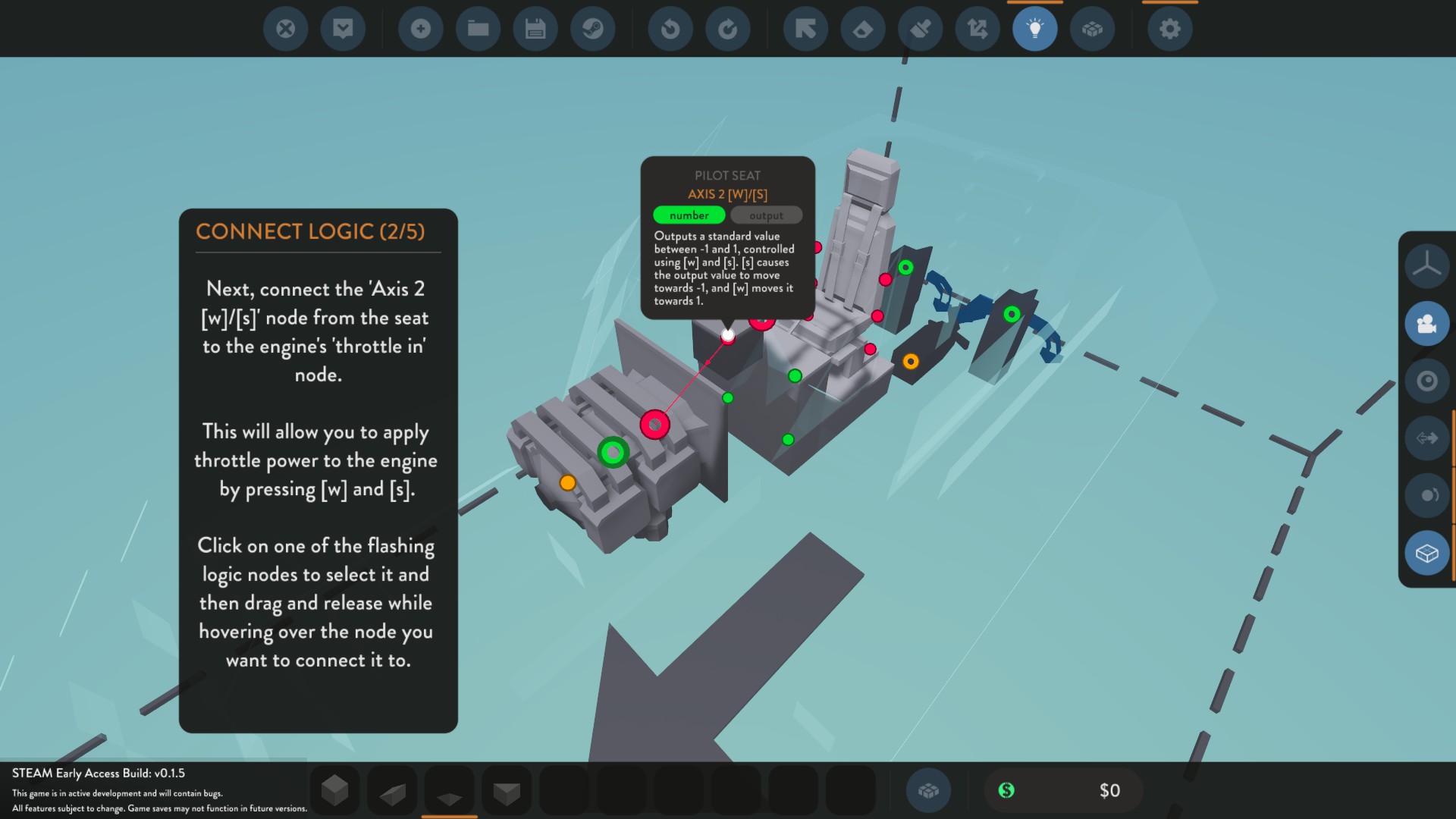 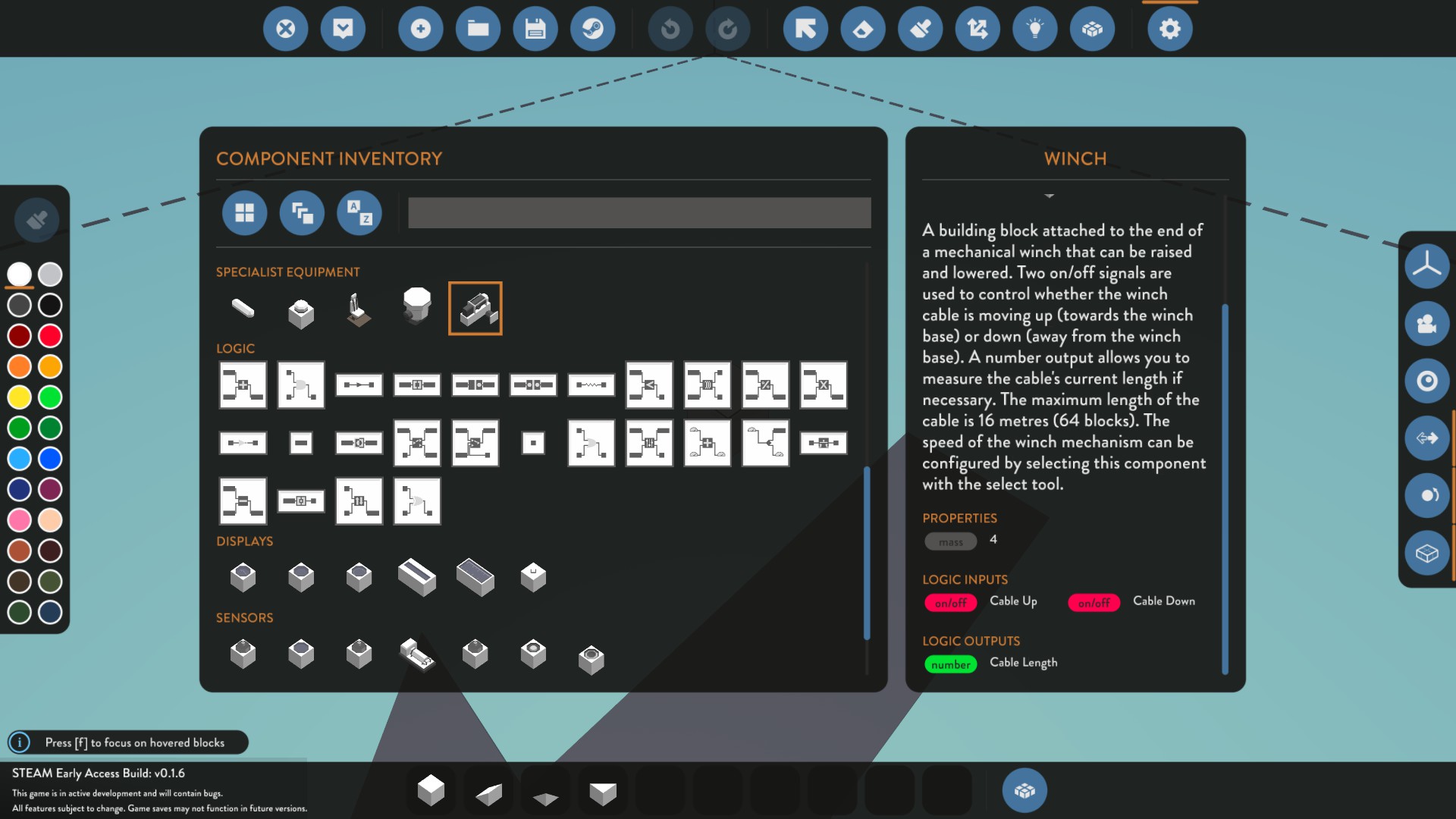 Career mode is the meat of the game, in my opinion; though I love sandbox games I do like to have some direction, and the gradual unlocking of parts provides you with this. Each time you begin a new game you can specify a numeric world seed for the random number generator to use in generating the world. It’s nice to see the layout of the islands change, but ultimately each world feels very similar to every other; the basic features are the same, just laid out differently on the map.

The tutorial is simple and easy, and can be skipped in subsequent games after you’ve completed it once. Unfortunately, though, the missions that must be completed in order to progress in your career only seem to come in a handful of different types, and some of them are exercises in frustration.

For example, the first mission in every game I’ve played has been to deliver up to five containers of cargo to a nearby power plant. I challenge you to try to put a full-sized delivery crate in your starting boat and deliver it on your first attempt! The physics of the game are such that you can easily bash your boat around and capsize it by accident while trying to position the cargo in the back, but actually getting the cargo in a position where it won’t fall out is frustratingly difficult. I’ve also had one case where unloading the cargo at the other end has caused the boat to flip over, with seemingly no way to right it — or return to your home base to make a new one. 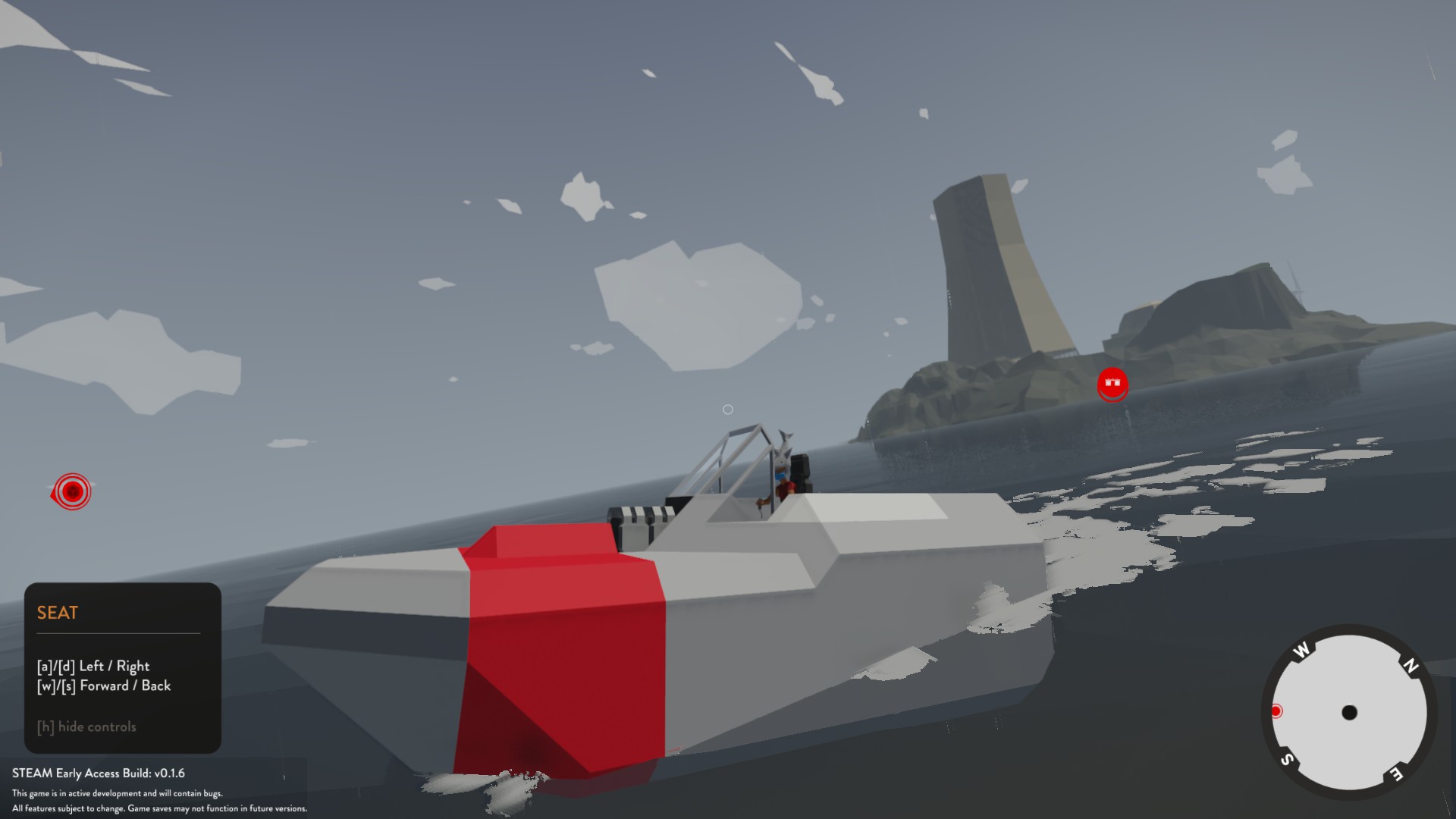 Missions where you have to transport people or smaller, lighter cargo, are easier, but beware that people can follow you and become stuck on terrain, making those missions impossible to complete as well. I’ve also had a career mode save corrupted by some sort of terrain glitch, returning to my home base to find my boathouse completely obstructed by rocks.

Some other parts of the game that need work include much more content — mission types, sample vehicles, building blocks, island types, … — and, a big one: vehicle damage and more logical vehicle physics. A great example of what I mean here can be seen by flying the provided sample helicopter in creative mode. You can crash into a rock spin around upside down and somehow right yourself and then fly off. Or you can plunge into the water, spin upside down, and then take off again from underwater. I’d like to see much more realistic vehicle physics in place, or at least as an option. There’s also not much use for wheeled vehicles, with the game world being made up of an archipelago of relatively small islands. Some larger landmasses would be cool, too. 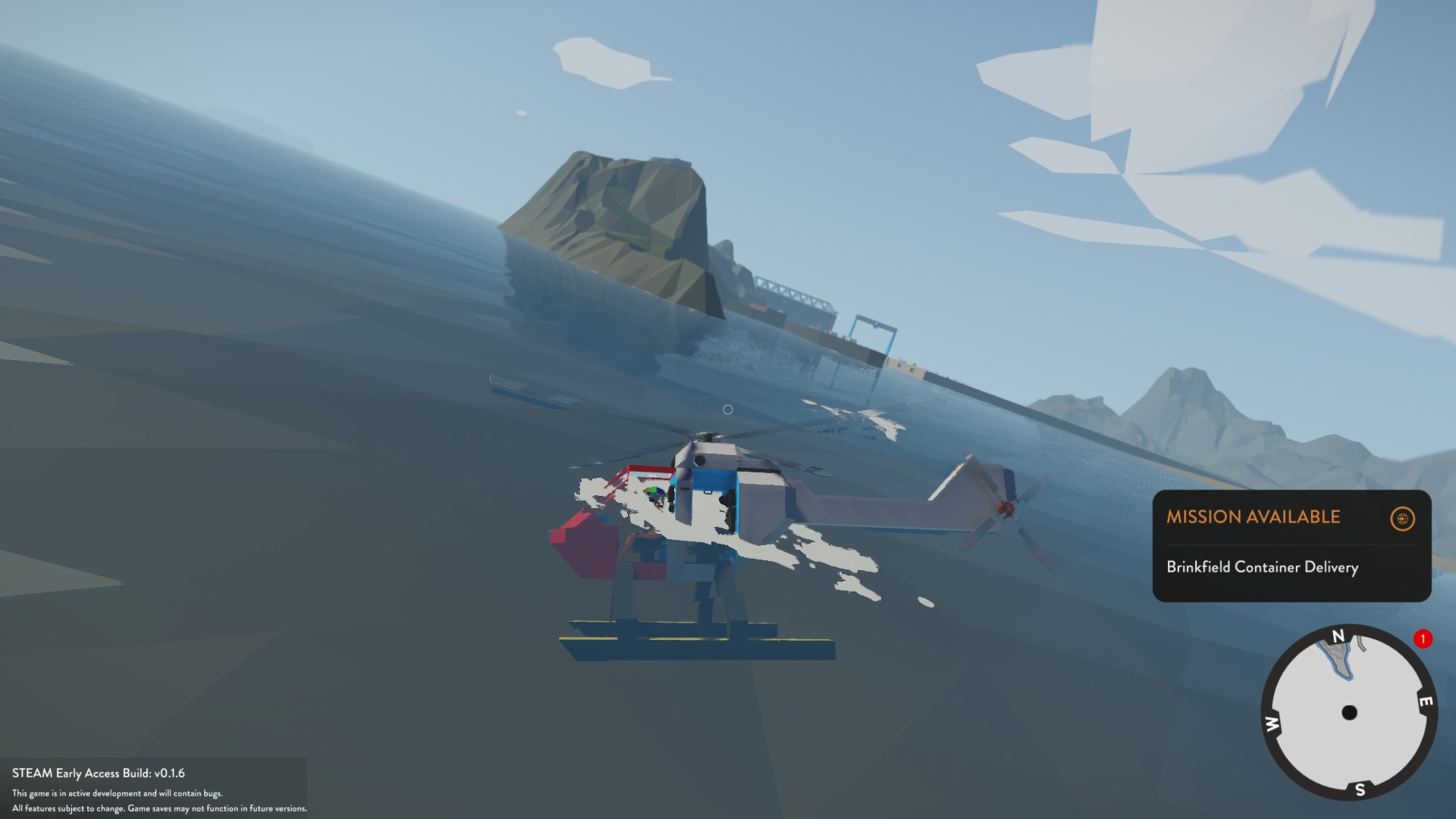 But the game is in Early Access, and bugs and missing features are expected. And even the game breakers and frustrations haven’t managed to dampen my long-term enthusiasm for the game too much. Just make sure you save frequently in different save files, and with luck you won’t have to restart too often.

Stormworks: Build and Rescue has a boatload of potential (haha), but at the moment it can be extremely frustrating. The game’s slippery physics make some of the missions a chore and the lack of information provided regarding mission requirements means you’ll fail at more missions than you succeed when you’re starting out simply because you don’t know what’s required.

But in spite of the frustrations and limitations I’ve found myself restarting career mode again and again, and though I still haven’t built anything useful in creative mode I’m still enjoying playing around. I recommend it as long as you don’t mind restarting every now and then; otherwise maybe wait for a few more releases.