The game was only recently released into Early Access and so far there’s no story or background information provided. You play a survivor of some sort of zombie apocalypse, but what you’re supposed to do, or why, hasn’t yet been revealed. I’ll go out on a limb and say it’s likely that you’ll eventually have to evade and/or kill zombies and maybe build some sort of base-like structure as well.

Your first encounter with Apocalypse will be a Steam dialog allowing you to select from DirectX 11, DirectX 12, or Vulkan API versions of the game. I didn’t notice any difference between them. Following that you’ll see the standard Unity launcher, from which you can select a graphical detail level and see the somewhat confusing control mapping (confusing only because of the different control methods; there are actually very few keys to remember if you’re using mouse and keyboard), and then, eventually, the game’s loading screens and main menu.

There’s no title screen, which is a bit odd, and the main menu is understated, though I actually quite like it — except that some of the menu options don’t work and others say that they contain options that aren’t there (such as vsync or MSAA). It also doesn’t quite look like the screenshot on the Steam store page, though I assume that’s because of an update. I should say that it has a reasonably attractive female character model, though, who’s hot in a Lara Croft sort of way. So that’s good, anyway. 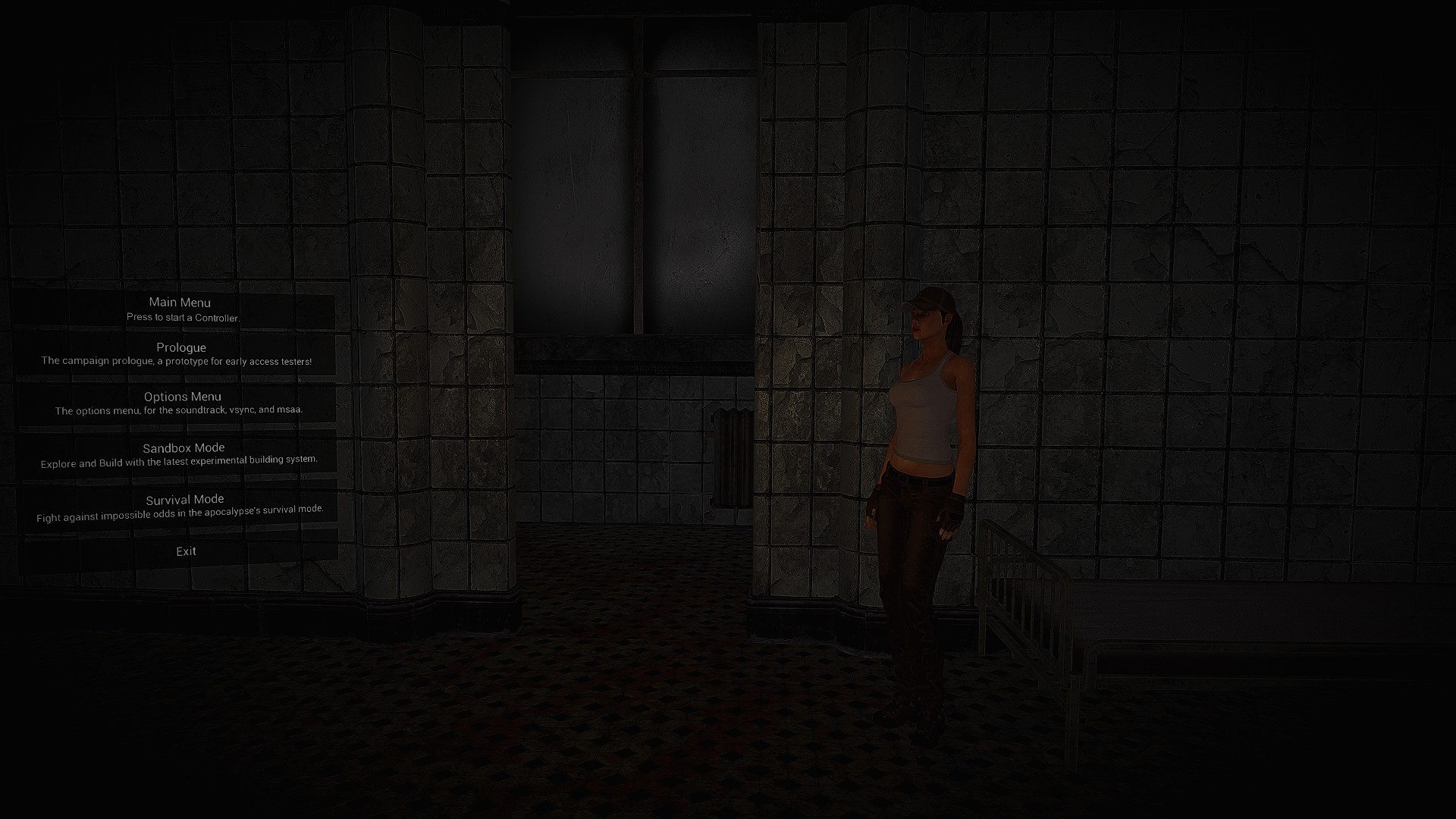 The game itself is played from first-person perspective and looks extremely dark. You can adjust this in the options menu — though the game advises against it — but it definitely has that survival-horror “so dark that you can’t see what’s going on” feel to it. Depending on the game mode you choose you’ll either start in a deserted mansion, which is quite nicely modelled, if somewhat unrealistic, or outside on one of two pre-built maps.

World objects are not that well modelled or textured. They’re okay, but they won’t take your breath away, and there’s some pretty severe pop-in at relatively close distances, as well as cars embedded in the terrain. Zombies, too, are not overly impressive, and they only seem to be present at all in survival mode. 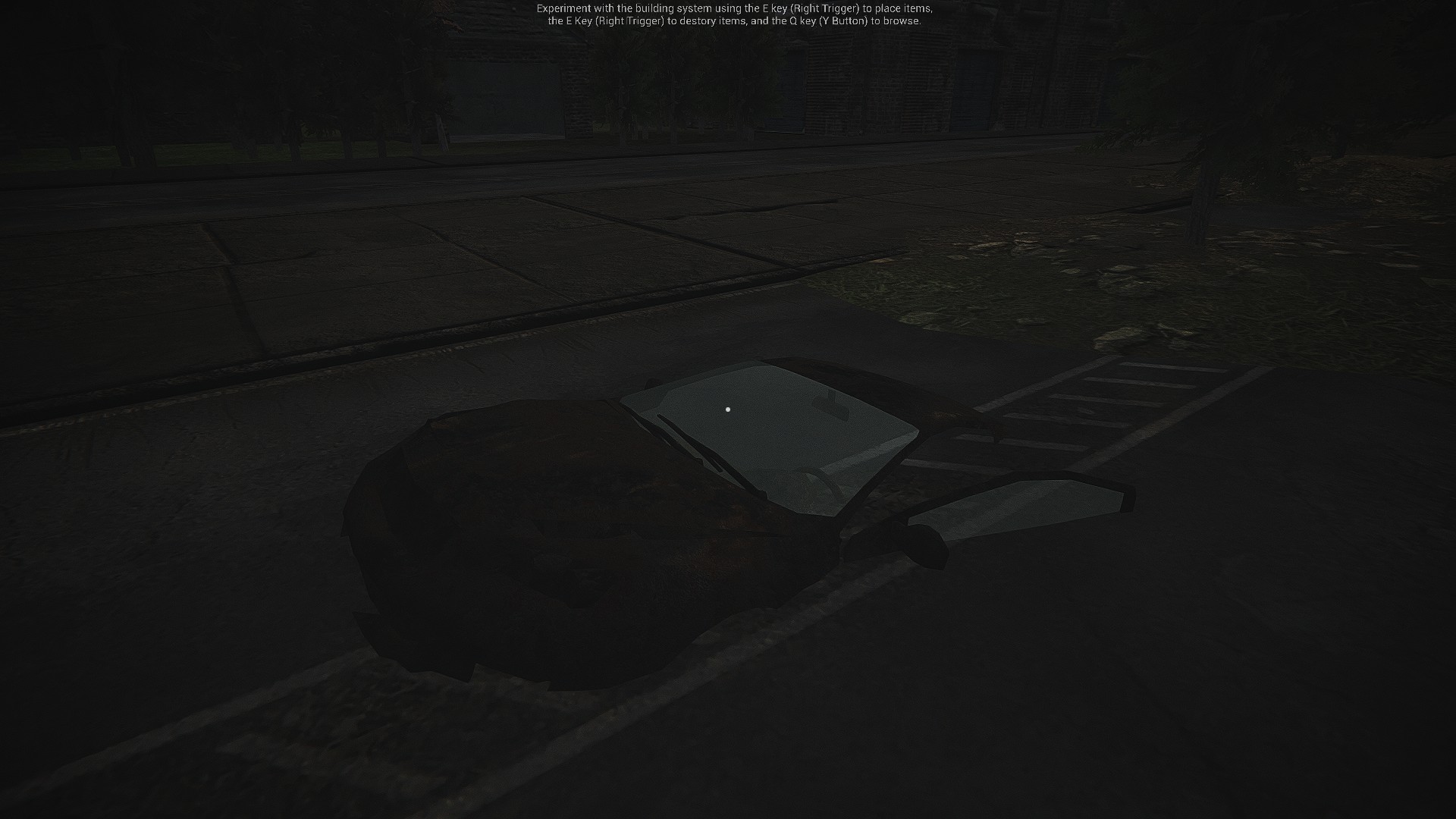 There’s good dramatic orchestral music, which is fantastic for the title screen, but not that great in game. It’s too ‘powerful’ to be background music at the default volume, and there only seems to be one track. Sound effects are minimal — in campaign mode you’d be forgiven for thinking they’re not there at all — and there are no voices.

There seems to be no in-game menu or help. Escape quits (slowly!), reverting to the main menu with no way to return, and the on-screen interface is minimal with only occasional pointers to controls. There are no inventory or character screens from what I can see, and there are a few grammatical errors even though the amount of in-game text is small. 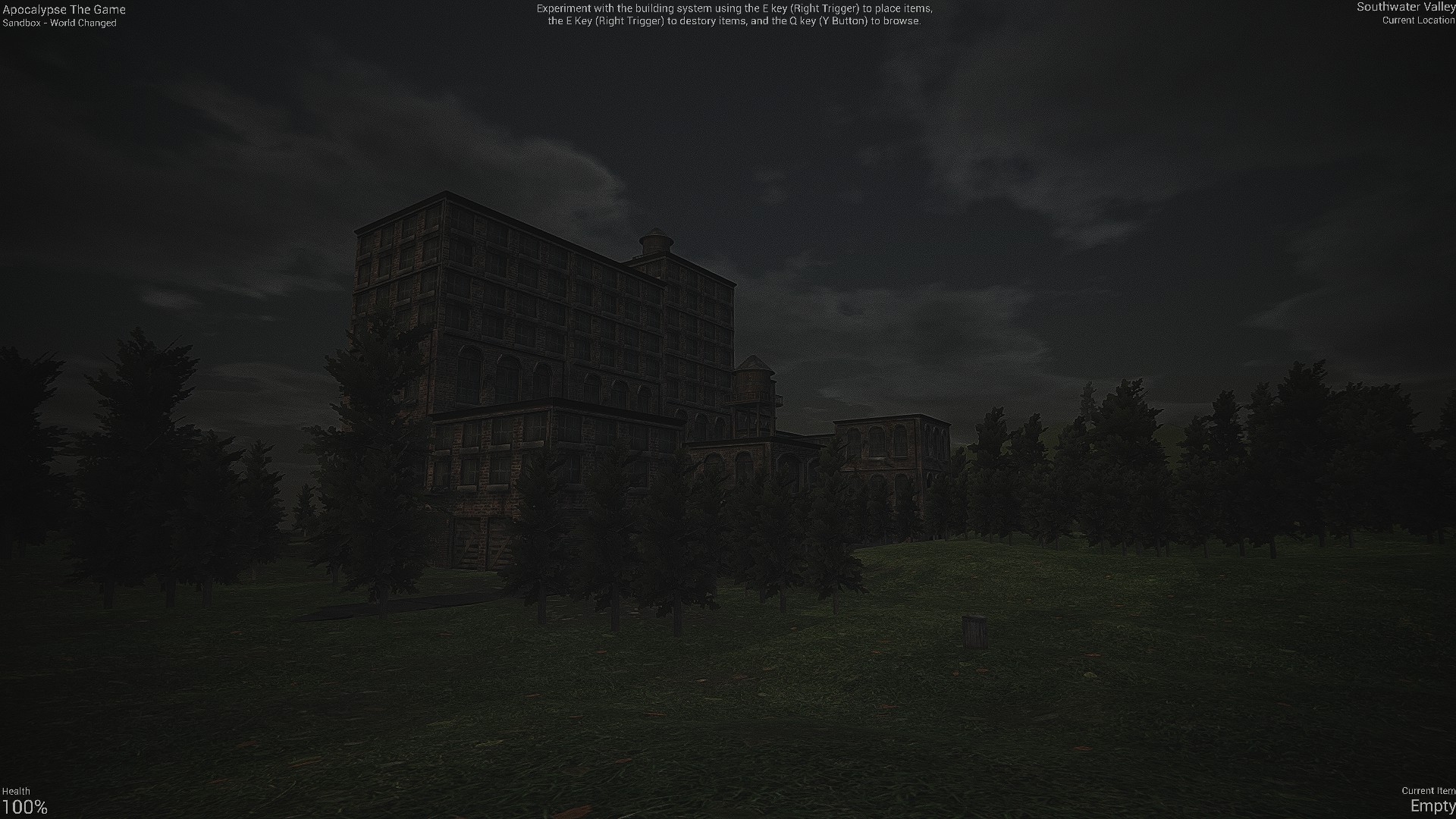 Apocalypse currently plays like a first-person shooter, but with only very limited controls, and mostly nothing to shoot. The game currently has three game modes: prologue, sandbox, and survival.

The prologue is the beginning of the game’s single-player campaign — a key difference between it and many other survival games. At present, however, it’s extremely limited, with only a deserted mansion with a handful of empty rooms and some locked doors. There’s no interactivity beyond picking up some pistol ammunition for a pistol that you don’t yet have. Chapter 1 is apparently close to completion, so I would expect it to be included in an update soon. The other two game modes are equally devoid of content. 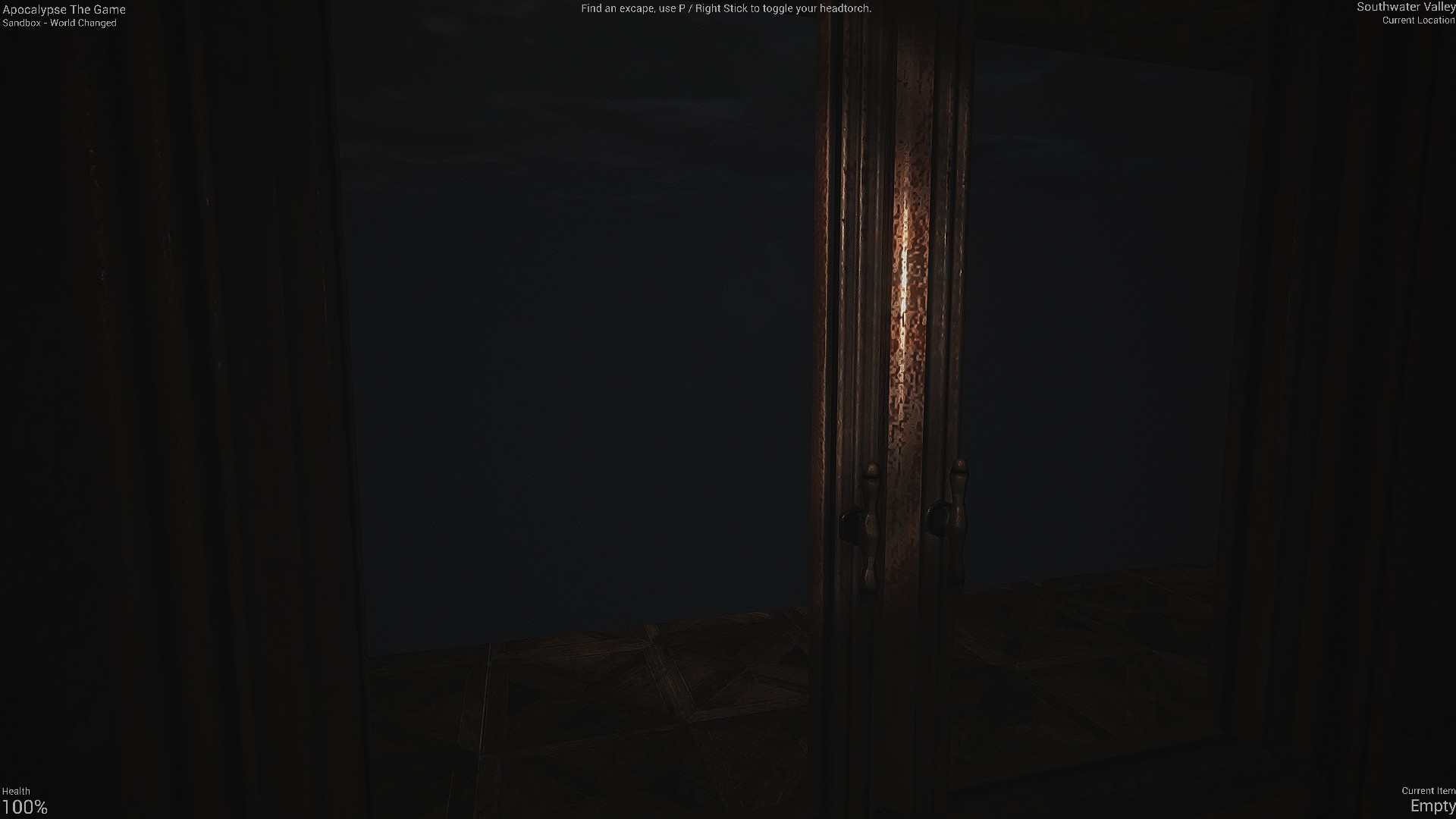 Sandbox mode lets you select one of the two pre-built maps (Steam Workshop support should eventually provide more) and try out the experimental building system. The world seems to be uninhabited, though, so after a few minutes of playing around with the building options — and trapping yourself inside your freshly built house because doors don’t open, doorways don’t let you walk through them, and ladders don’t work — you’ll most likely have had enough of that. You can also wander around the map at your leisure, which is sort of fun for a bit, but this mode would be much more interesting if you could use doorways, doors, and ladders, and save your structures. 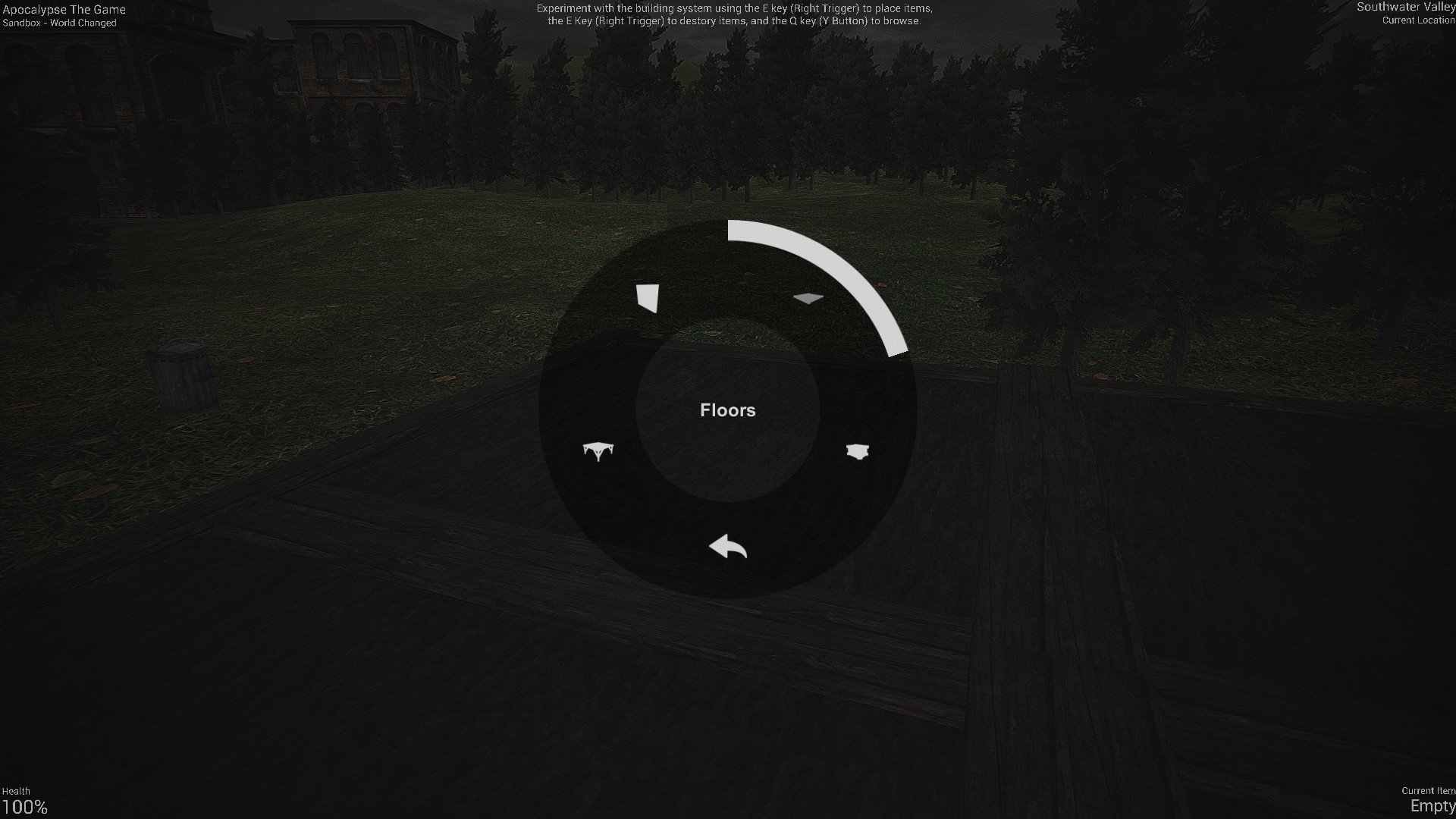 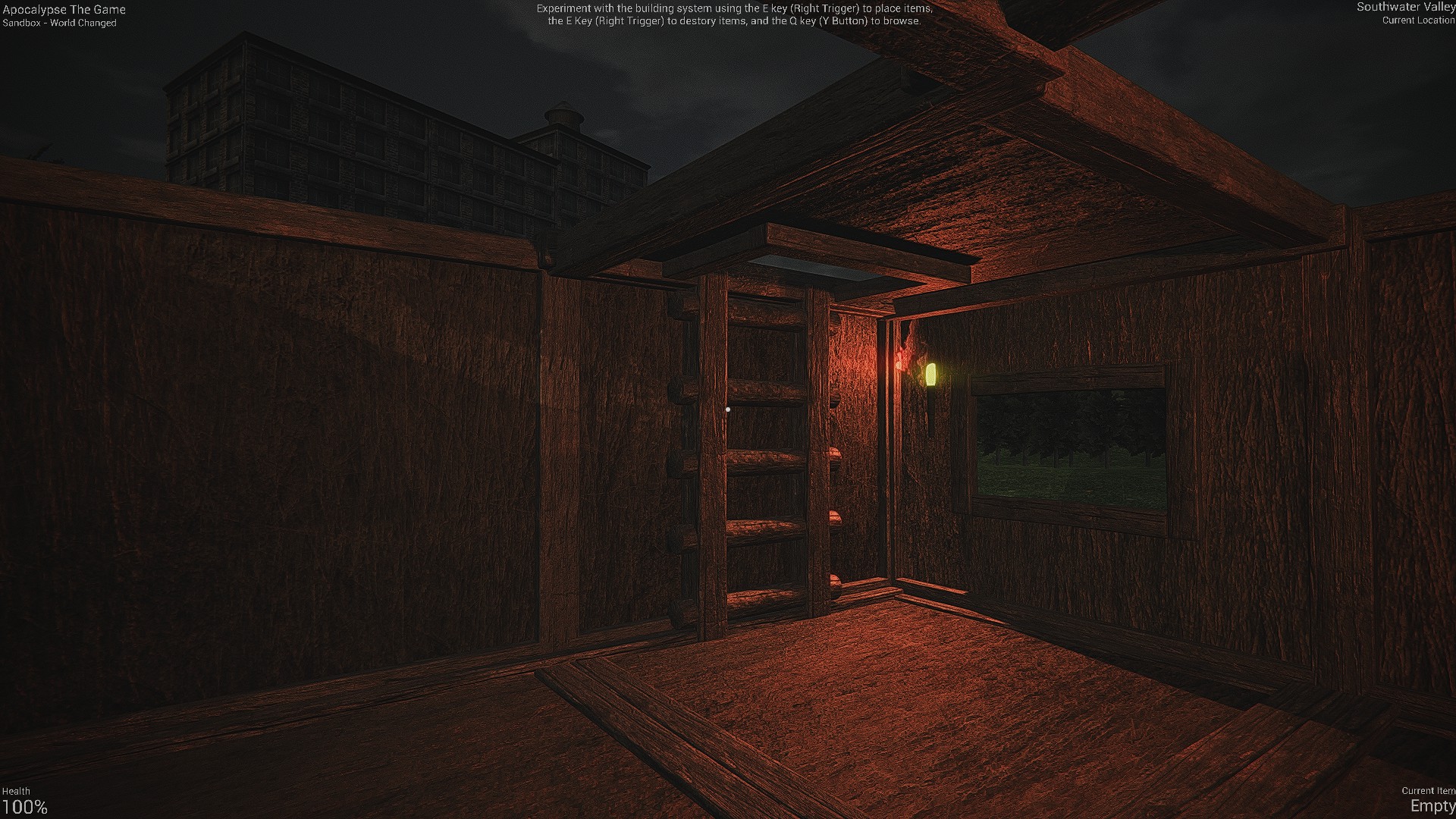 Survival mode lets you select the same maps as sandbox mode, but removes the building interface. Instead here you can pick up weapons and ammo from set points on the map and use them to shoot at continually respawning hordes of zombies with questionable AI — sometimes they’ll run straight past you — and highly variable toughness. There are a few weapons to find: pistol, automatic rifle, and shotgun are what I’ve found so far. But again, after a few hordes have attacked you’ve basically seen what the game has to offer in this mode, too. 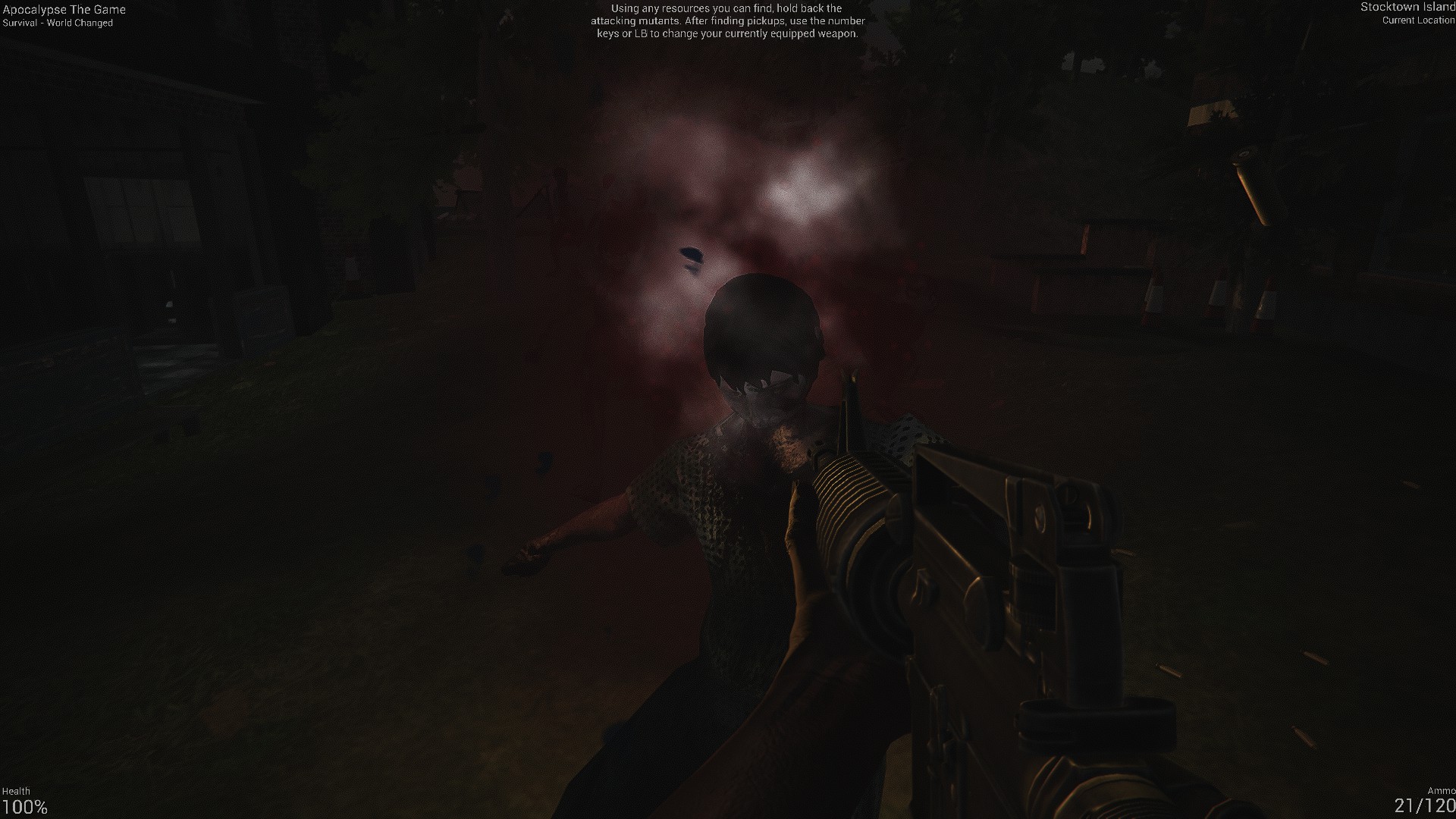 There’s no game world interaction in any of the three modes, beyond being able to place foundations when building in sandbox mode and picking up strategically positioned weapons or ammunition in the other modes. You can’t open doors, enter most buildings, scavenge or craft items, or any of the things you’d expect to be able to do in a title like this. Or at least not yet anyway.

As well as the general lack of content and interactivity, I’ve also encountered a couple of bugs, the most severe of which was that the game often freezes when trying to restore from alt-tab when in sandbox mode. Once it froze so badly that I couldn’t do anything in Windows as the game didn’t want to let go of my graphics display; even CTRL-ALT-DELETE didn’t work, so I had to reboot. I didn’t try in survival mode, but alt-tab worked fine from the prologue, so that was a bit weird.

I’m currently addicted to survival games and I love a good post-apocalyptic zombie game world. Even though Apocalypse: The Game is still in a very early stage, I was excited to take a look. That excitement quickly waned. To be blunt: there’s no survival, there’s no crafting, no building unless you play in sandbox mode — and even then you can’t use what you build — and no zombies unless you play in survival mode, in which case there are just endless groups of zombies charging about.

At the moment the game is basically a tech demo; I can’t recommend it in its current state to anyone. But the developer seems keen and the game has been in development for quite some time, so if you like post-apocalyptic zombie games then this is one to watch to see where it goes. Just bear in mind that there’s not much here yet at all.