McRogue is a fixed-camera 3D action beat-em-up, with rogue-like elements and a gun. It’s not all there yet, but it’s still worth a look.

McRogue is the debut title from indie developer, Snare Games.

There’s no in-game backstory provided yet, but from the store page I understand the gist of the game is that you play as McRogue, a human-turned-cyborg by a never-ending army of robots that travels the universe attacking and pillaging planets, leaving them worthless husks. You’re the only one who can stop them, apparently, though I’m not entirely sure why.

In terms of presentation, at the moment McRogue feels very much like the Early Access title it is. There’s no introductory cut scene, no backstory, no tutorial, no help, … . In fact, in terms of introduction, there’s not much at all. The game has a single game mode — survival — and when you start it dumps you into the game world with a “find the teleporter” prompt, and that’s it. 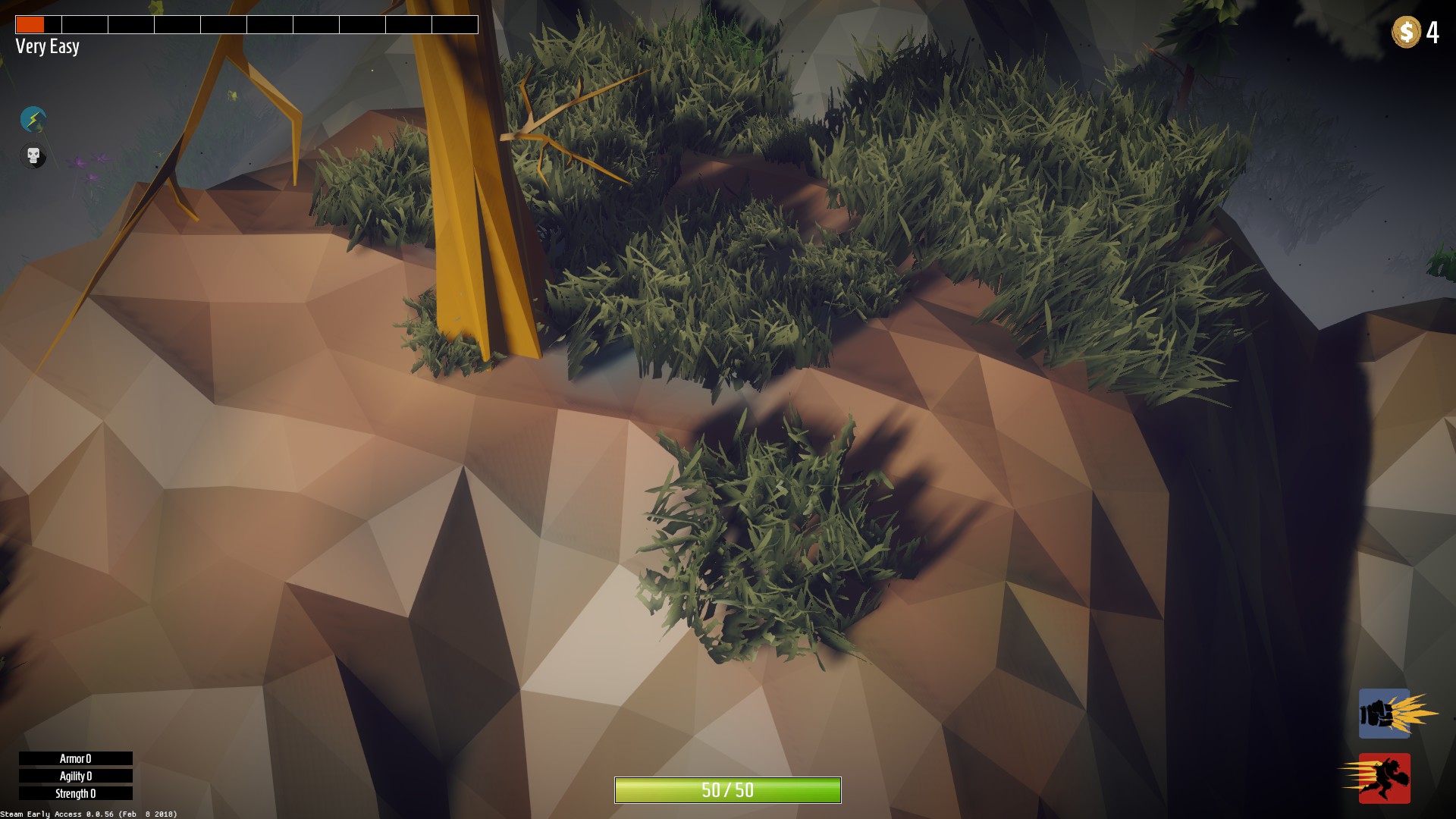 The game is played from a fixed camera position, with fixed zoom and rotation, in a sort-of three-quarter overhead view. It appears to be rendered in full 3D, with a sort-of stylised heavy-edged triangle look that makes it look much more low-poly than it is. Everything moves along at a good rate and it all looks rather nice, but the lack of camera control is frustrating, especially when the terrain gets in your way. There are some great special effects, too, with funky explosions, nice lighting and shadows, and a very cool death effect. 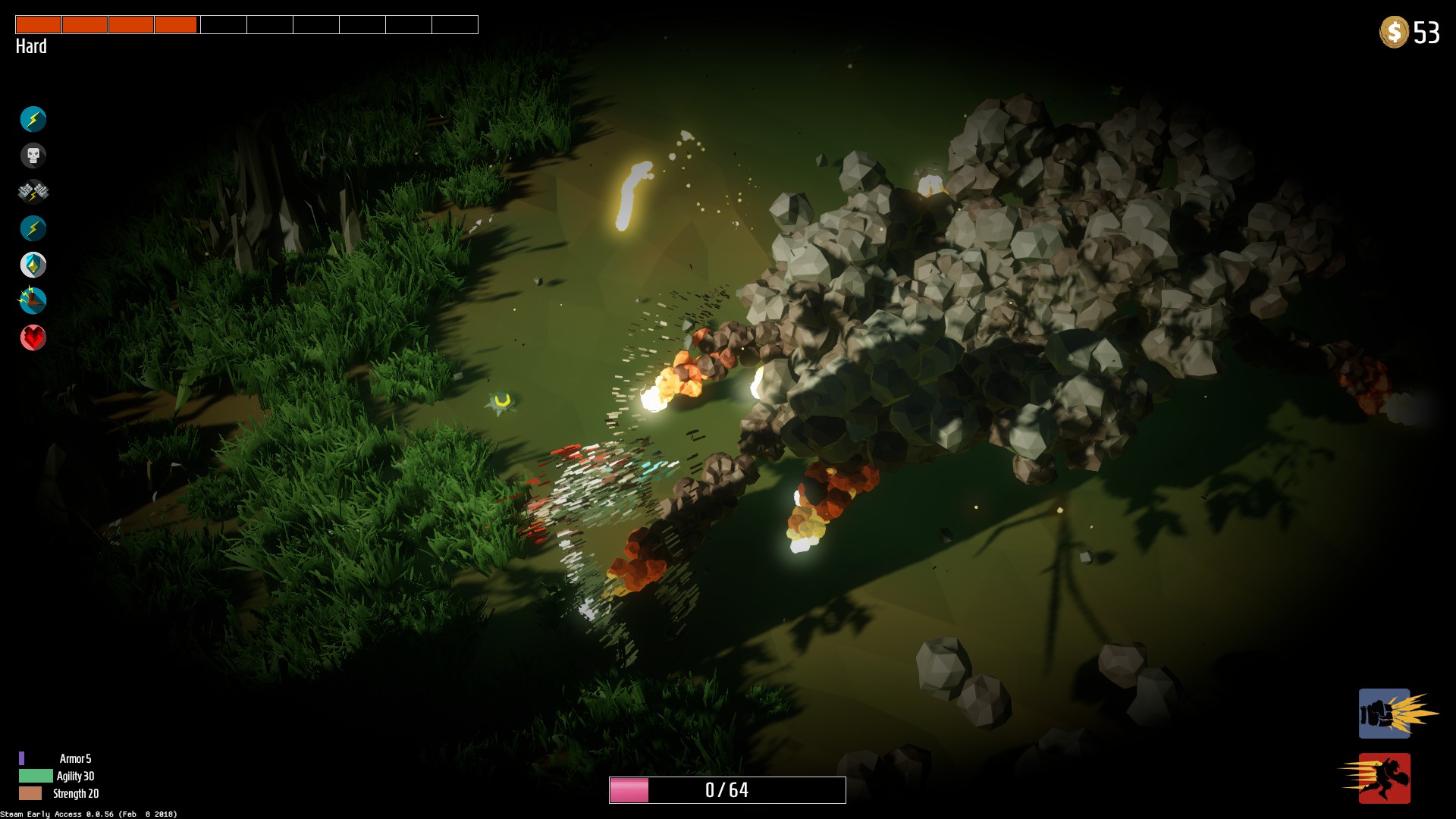 The interface is simple and mostly easy to understand, but the controls screen when you have a controller connected is pointless: it gives you a series of numbers that presumably you’re supposed to interpret yourself. The rest is minimal, but functional, and provides you with all the information you need to play.

There’s one (maybe two?) song music track that’s played throughout. It’s okay and fits the game well, like a sort of Running Man tune, but it does get pretty boring after hearing it for hours on end. Sound effects are acceptable and do their job; they seem to be well normalised. There are no voices.

There are a handful of graphics options if you feel the need to try to optimise the experience; I haven’t encountered any performance issues on a GTX 1070. 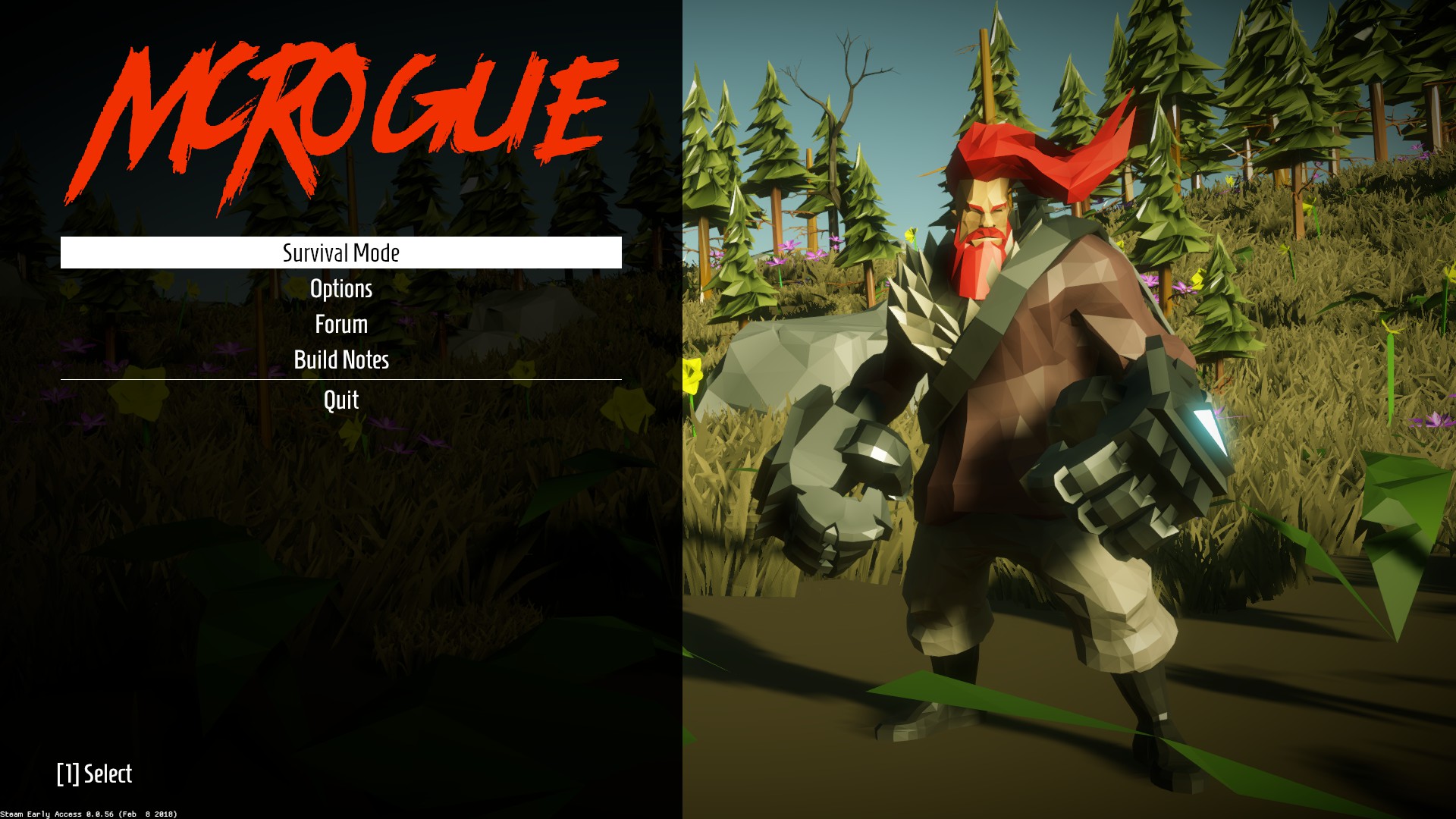 I’ll start by saying straight out that McRogue is NOT a twin-stick shooter, no matter how much it may look like it. Instead, you can think of it as a single-stick beat-em-up with a gun: your left hand keys/stick control McRogue’s facing and movement together, while the right hand keys/buttons let you punch, shoot (with a frequency based on a cool down), jump, or dodge/dash in the direction in which McRogue is facing. This is a bit of a shame; I think it would be more fun if you could control at least the gun aim independently from direction of movement, but the current implementation is workable. 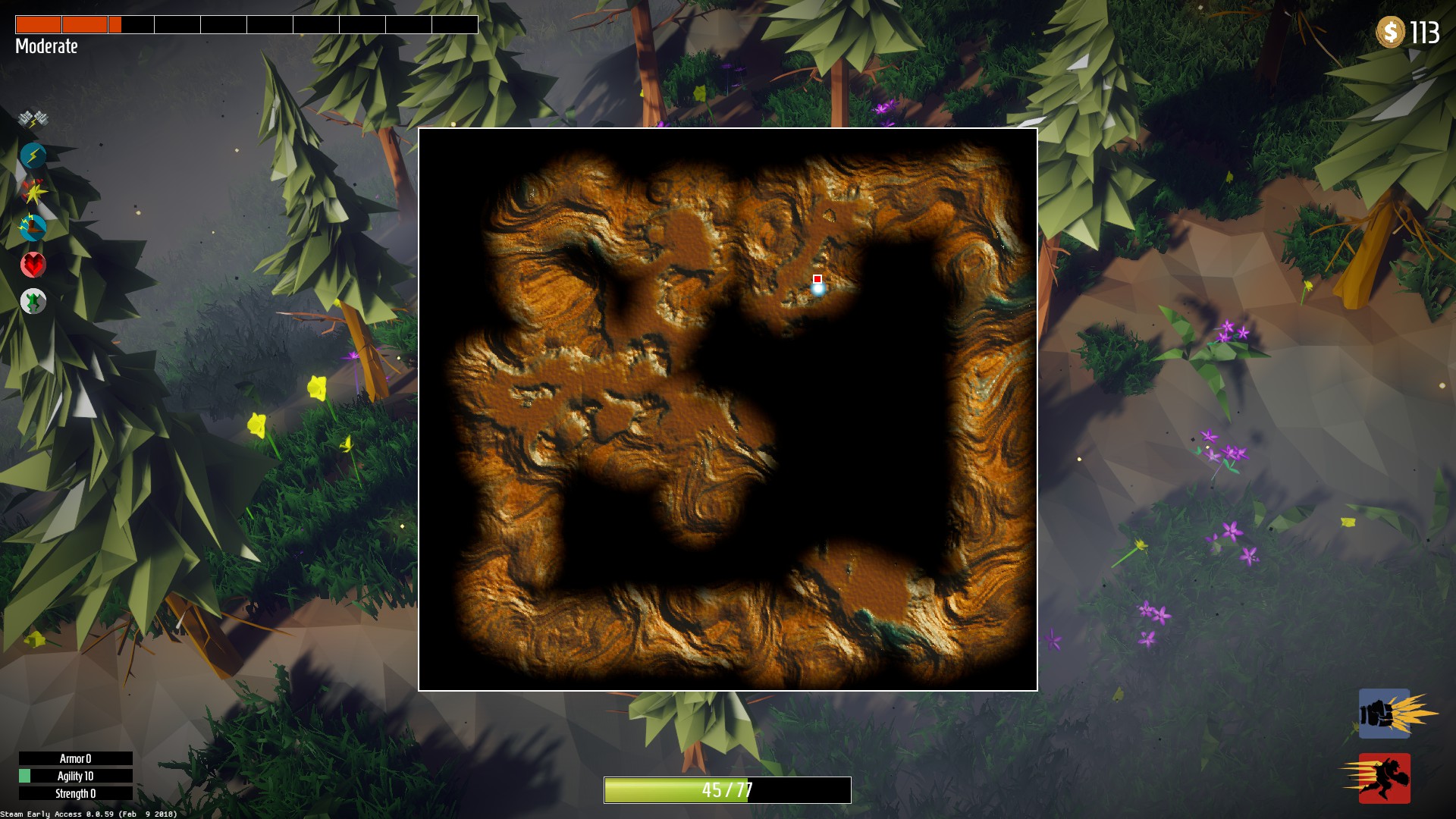 Each level starts with McRogue spawning somewhere towards one edge of a procedurally generated wilderness map, with a message telling you to “Find the Teleporter”. You roam the area dispatching seemingly randomly respawning enemies for small amounts of cash until you find the teleporter. When you activate this a countdown begins and a boss spawns, along with much more frequently spawning random enemies; survive the countdown and kill any enemies that remain and you can activate the teleporter again to go to the next level, where you can do it all again. As you roam each level you may also come across upgrade towers, which give McRogue a random stackable passive upgrade in exchange for $25, and health towers, which heal McRogue for a set amount of hit points for $15. 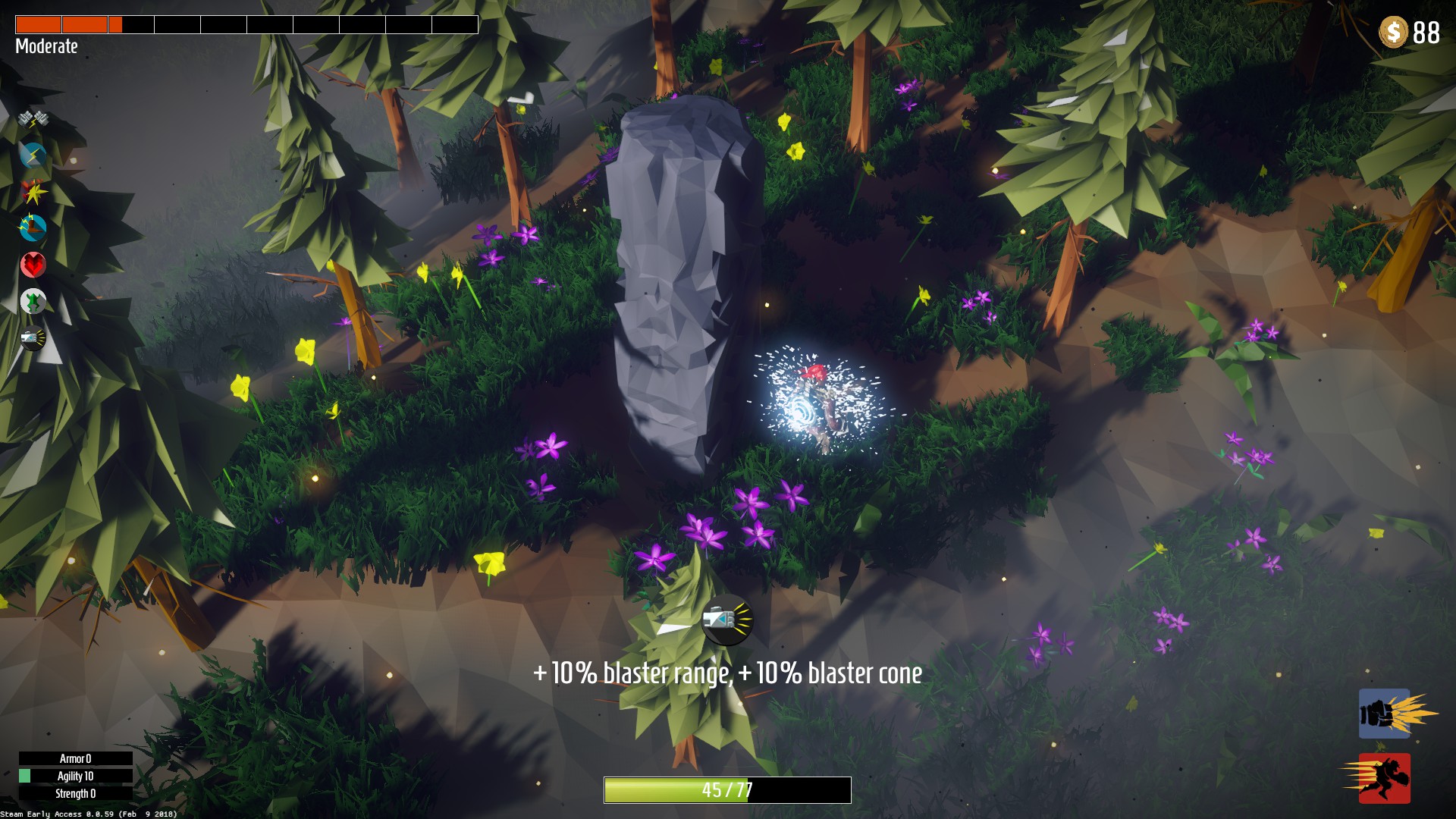 As you play, the difficulty meter at the top of the screen gradually fills. Starting at “Very Easy” and steadily progressing, this determines enemy types and numbers that you encounter as you play, as well as individual enemy hit points and, I believe, how often enemy ‘waves’ spawn. It’s a nice addition to the genre, but since you really have little control over how quickly you reach the exit on most levels — you don’t know where it is, after all — it introduces more randomness rather than tactical considerations.

And at the moment that’s it. There are apparently three different biomes for the terrain generator to use, but I’ve only seen two as the game’s instability has so far prevented me from reaching the third. There’s only a single boss, reused on each level, and a handful of different enemy types. Each level, though procedurally generated, feels the same as the last, since it doesn’t really offer anything different. There’s only a relatively limited number of upgrades, too, so after you’ve played for an hour or two you’ve really seen all that McRogue currently has to offer. Each level you lose any collected cash from the last, too, though you retain any purchased upgrades, as well as your existing hit points and difficulty meter. And there’s no progression between games. In its current early stage, it feels more like a technology demo than a full game. 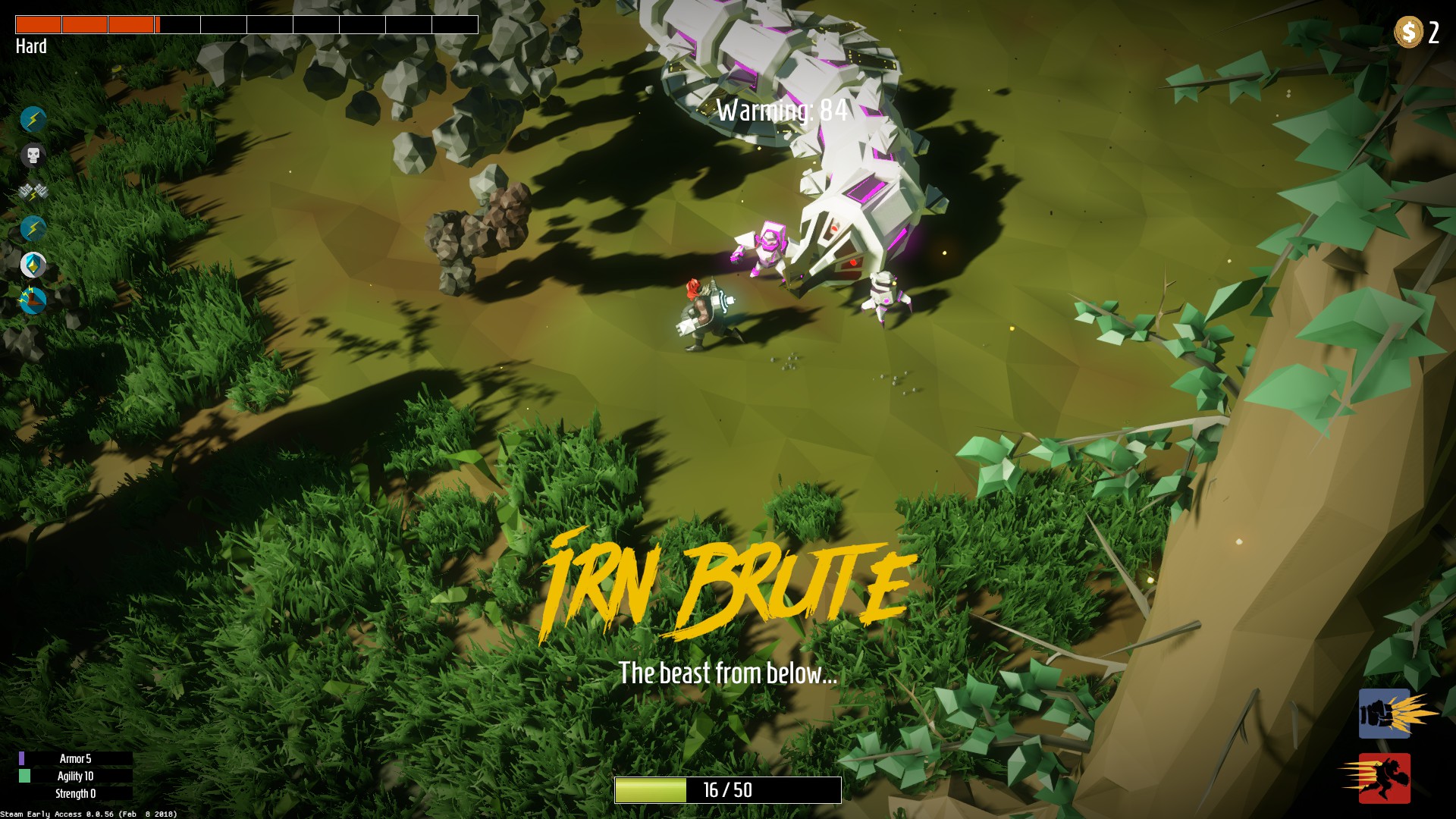 There are also a number of issues, as you’d expect from most Early Access titles, though it’s unfortunate that in McRogue‘s case some of these issues are game breaking. First, there’s the stability, or rather, the instability. I’ve had frequent game freezes followed by crashes to the desktop. Each of these creates a 180 MB crash dump that you can upload and provide to the developer, but given some slow Internet upload speeds, that may not be feasible. I’ve also had one instance where I was knocked below the map, requiring a quit to the main menu; this is apparently a known issue, but there’s no fix yet. All of these happened while I was doing rather well, making them all the more frustrating. (Note: as with many games with rogue-like tendencies, there’s no save system here.)

The stated “full controller support” works well — and the game is definitely better with a controller than with mouse and keyboard — but the control screen is useless for anyone using a controller; I have no idea what “7” means for my XBox360 controller; do you? 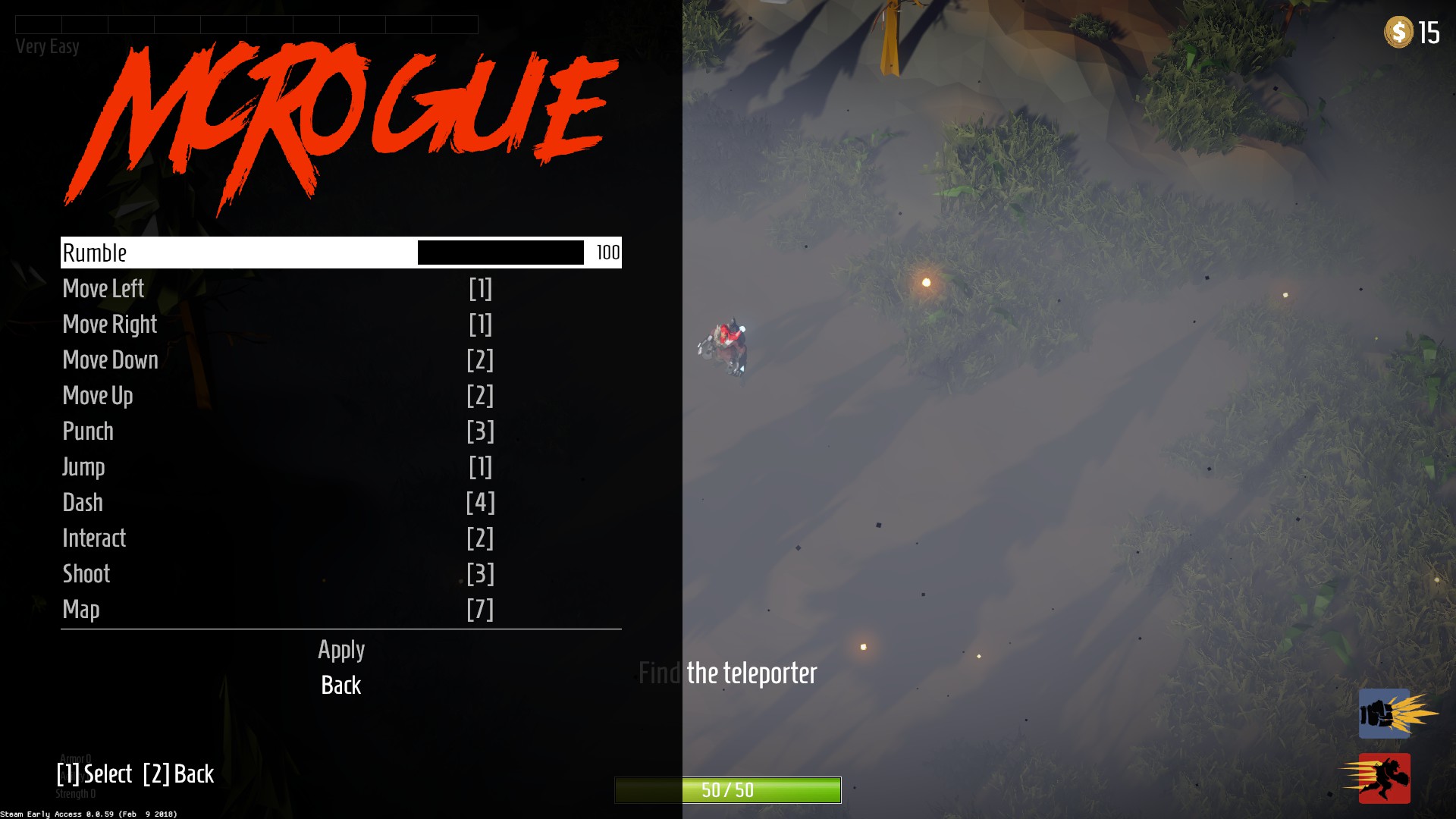 I’m a huge fan of rogue-like elements in games, and particularly twin-stick shooters. For the life of me I just can’t work out why McRogue‘s developer decided to not turn McRogue into a twin-stick shooter / beat-em-up. Instead the design forces you to in the direction in which you’re moving, which limits your options. That said, McRogue‘s combat is still fun, though with the current limited offering of enemies and no fist or gun upgrades available it becomes extremely repetitive.

At the moment I can’t recommend it due to its limitations and instability-borne frustrations, but if you enjoy action games with rogue-like elements you should definitely keep an eye on McRogue.