Rogue Empire. A newbie friendly Roguelike. Surely thats an oxymoron? Nope! Read on to see what sets this title apart from the usual hardcore dungeon crawler

Rogue Empire is a fantasy themed turn-based Roguelike RPG with a focus on easy to grasp gameplay. Here, players can explore and fight with a customized character in order to free the capital cities of Ethistos from a mysterious shadow force. There are seven races and five distinct classes to choose from with a unique class building feature based on Trading Card Games concepts. You will discover a huge map with exploration events, side quests and story.

“The shadow came, destroying everything in its way! Every kingdom in Ethistos was losing ground and lives. When all seemed lost… the First Shadow disappeared! Where? How? No one knows… But the marks of their coming still linger across Ethistos!

Embark on a quest to heal the world of Ethistos and unveil the mysteries of the First Shadow!”

Rogue Empire is a passion project from German Pablo Wachnitz. A software engineer. He is the sole developer of the title along with a couple of artist friends. His dream and vision are to create an accessible and easy to play classic style roguelike. By focusing on good UI along with intuitive and dynamic tutorials, he hopes to make this dream a reality and broaden the appeal of this niche genre to a wider audience.

There are currently two campaigns on offer. The first is the Eghoss campaign, which acts like a tutorial on how the game works and the foes you will encounter within the world. You play as a Human Warrior. Your task is to navigate a 20-level dungeon and find the orb of fate. Along the way, you encounter two boss fights. If enabled, the context-sensitive tutorial info boxes pop up during the opening session. These superbly guide players new to roguelikes, explaining the basic gameplay systems as you make your first step in the game world.

The main campaign adds a Dragon Quest style overworld to the mix. This contains various dungeons, towers and towns to explore. There are also different environments to traverse such as swamps, deserts, dense woodland, jungles and mountainous regions. Along with the main story arc, you can encounter random events whilst exploring individual tiles. These can result in skirmishes with bandits or trying your luck with the RNG gods to pick up items, gold, or XP bonuses. 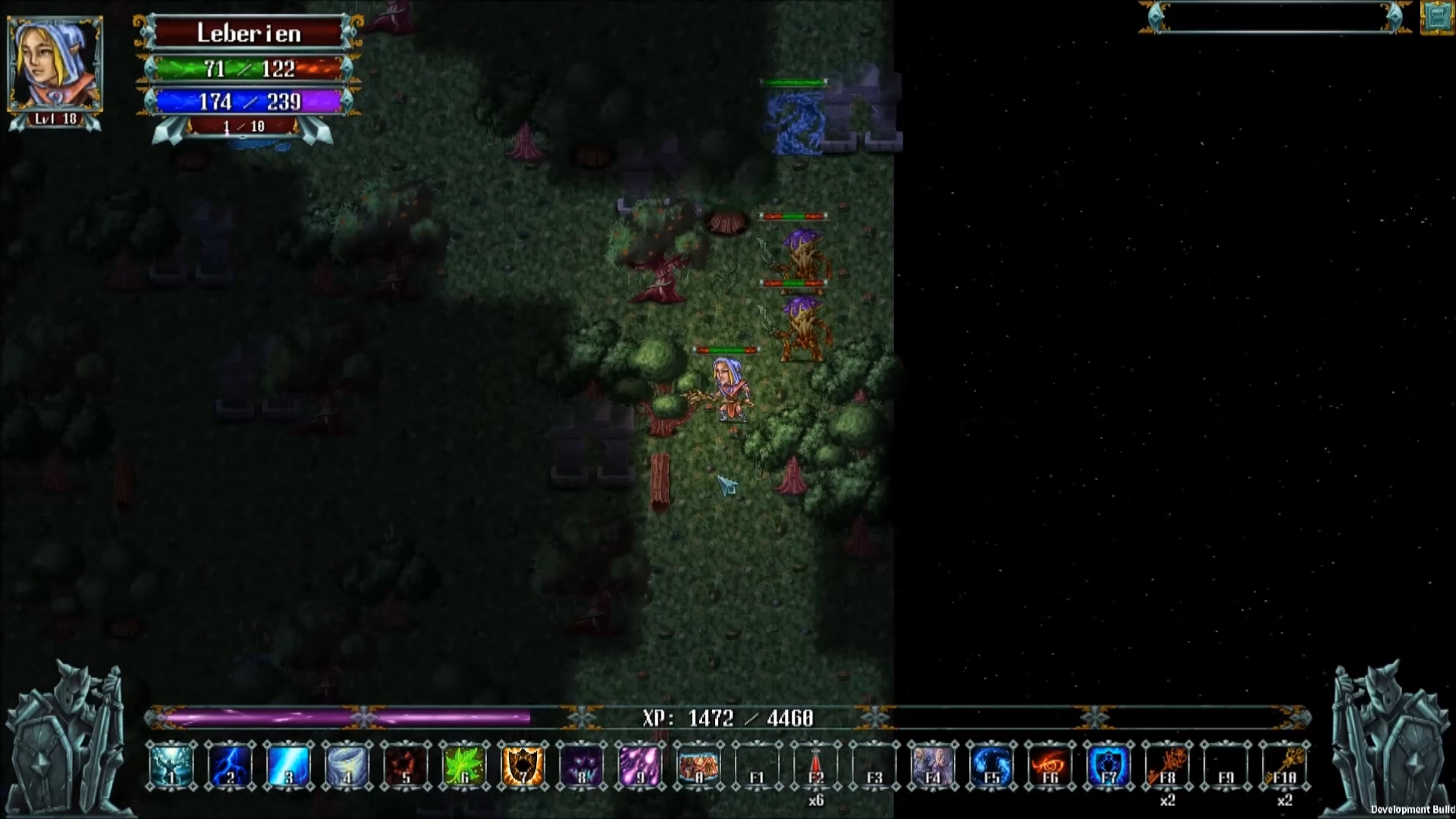 Rogue Empire is very much in the classic roguelike wheelhouse. Everything you expect from this genre is here. The procedural dungeons generated are mainly of the corridor/room variety with a few column types environments thrown in every couple of levels. If you are a veteran crawler then you will feel right at home here.

At the start of the main campaign, you are given seven races to choose from. four are the usual suspects known to all and staples of any fantasy setting. They are trolls, humans, elves and dwarfs. The remaining three are unique to the game and offer some interesting races traits. The Vinscians are descendants of some strange feline genus. They have great speed and good initial perception skills. The Naga are reptiles who can perceive enemy weakness, thus enabling them more critical strikes. Like most reptilians, they don’t like the cold. Finally, there are the Otwok, these are a sentient tree folk, as old as the gods of Ethistos. They derive sustenance from the light and soil around them, therefore reducing their need for food compared to other races. Totally resistant to poison. Their Achilles heel is their weakness to fire.

Every three levels you get to pick from the talent deck. This is a randomly generated flop of up to four cards. These have various talents germane to your class. As with CCGs, they are colour coded from legendary(Orange) to common(Grey) abilities.

There’s a cavalcade of denizens that you will encounter whilst you descend ever deeper into the dungeons. The usual fare frequent the upper levels, bats, bears, snakes and skeletons. As you progress deeper, all manner of foul wretches begin to emerge. Fungal Magi appear and spawn what look like cute mushrooms fresh from Disney’s movie Fantasia. Leave them to grow and they morph into full-blown swordsmen or even worse, more Mages. A top tier greater lich disrupts time and space to conjure up black holes, which destroy surrounding walls, sucking in all stupid enough to get caught up in their gravity well. Other foes such as Insectoid Royal Guards can be used to your advantage as they battle not only you but any beasties that get in their way. This trait can be used to your advantage by skilful positioning between mobs.

The random nature of the card based ability system forces the player into choosing new build combinations. This makes every character rolled different and unique. Keeping the gameplay fresh and offering new strategies during skirmishes. 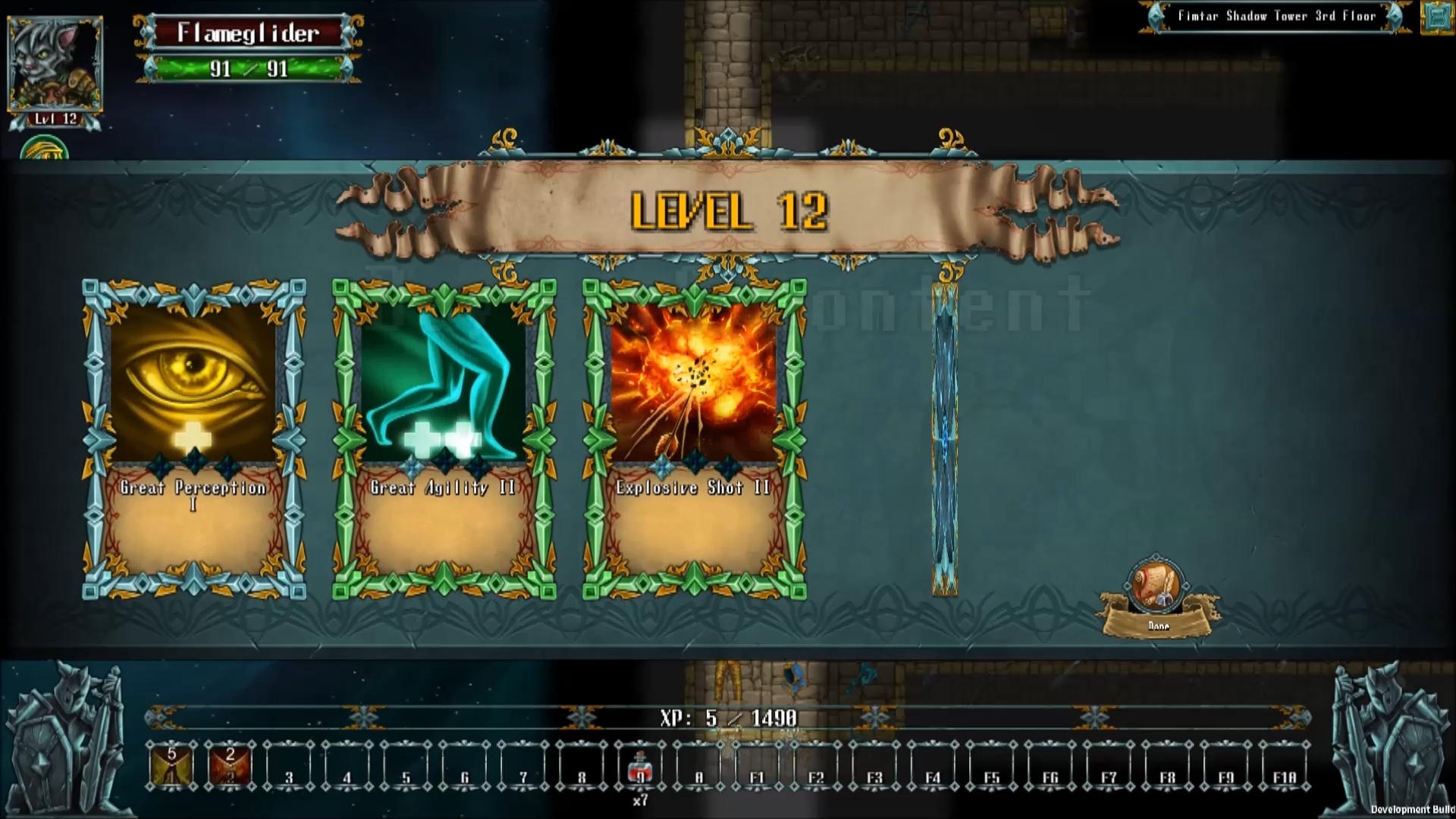 I’m going to preface my following comments with the fact that I’ve not played all the current roguelikes offered in the steam store. BUT. I think they are worth highlighting for this title, for being extremely helpful for newbies. First of all, there are a myriad of keyboard shortcuts. There’s auto-explore for quickly discovering new parts of the map, a show exit function which zooms the camera to all the exits on the current level if already uncovered by the player, and this can be tabbed if there are multiples. There’s also a really zippy mouse scroll wheel function, which magnifies and zooms out the overall play area. This negates the use of map view as it quickly shows and highlights the surrounding area. It’s a very powerful feature. I used it constantly during my extensive play sessions. It really shows off the graphics engine’s tight coding with its lightning responsiveness. When zoomed out, items of interest are highlighted with a blue glow.

Small graphic features also aid the player. All the weapon sprites are layered onto the Character sprite. So, as you change or upgrade your gear, you get a proper visual indication of what weapon is currently equipped. This is not down to a stock staff sprite but the actual sprite for said weapon, So a steal one-handed sword will show as a steal one-handed sword. Yet again this mitigates the constant the need of going into your inventory to see what you have equipped, thus streamlining the experience.

There are a host of filtering options on the inventory screen to aid your item management. Sort by alphanumeric or latest acquired. These tally nicely with filters for weapon types, item groups such as food, spells wands, and potions. 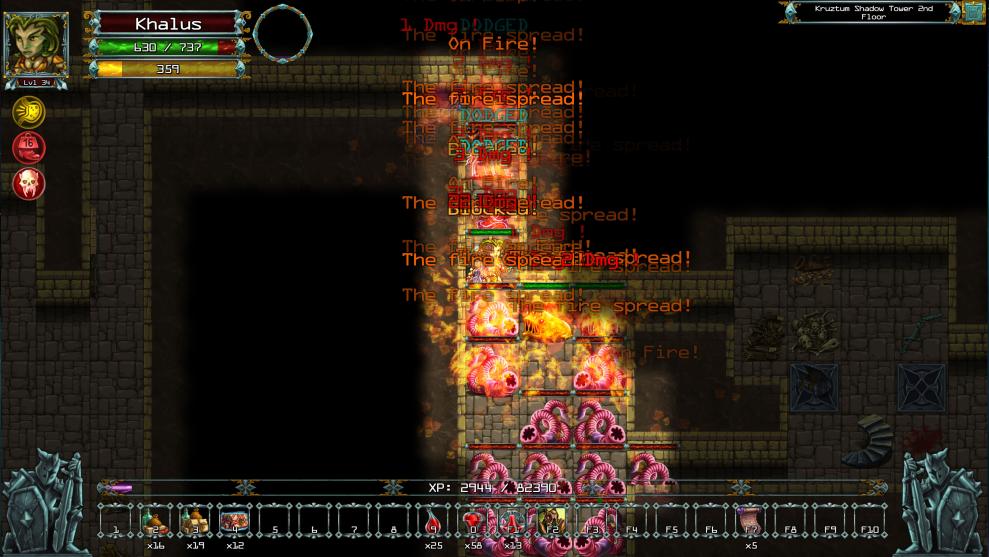 There are some standout environment animations amongst all the tilesets.  Just look at the green goo dripping from the sewer grate or the particularly cool wooden door opening.  Even though these are small features, they lift the whole presentation, adding an extra layer of graphical pizzazz to the whole experience.

Sprite design is consistent and of good quality, even though there are no movement animations. The clever use of spot FX for spell and particle systems breathes life into the battles and skirmishes.

The default dungeon tileset is good quality, but not quite on level with one of my favorites, Shiren. It’s a clean design but perhaps lacking in charm. It also overstays its welcome on some the deep crawls I played through. 10 levels of the same art without any palette swap and the same old broken sword decals littering the floor became a rather staid ordeal.

The soundtrack was a bit spotty, with some of the tracks seeming just out of place. Crunching guitar riffs just didn’t sit well with the overall fantasy theme. They seemed much more suited to a Command and Conquer RTS universe. Whether this was intentional I don’t know. Also, the tunes appeared to have no correlation or to be tied to any particular level. Almost like a random jukebox selection. This needs tightening up before release.

Use of spatial positioning for drones and off-screen noises adds cool audio cues for foes out of the player’s visual scope.

Due to its clean design, I had no trouble running RE on my ageing laptop. Even using the integrated Intel graphics the game ran silky smooth. Unity engine and the roguelike genre are a good match. The tech allows the 2D art to shine and offers a stable environment for the developer to add rich and compelling gameplay systems. 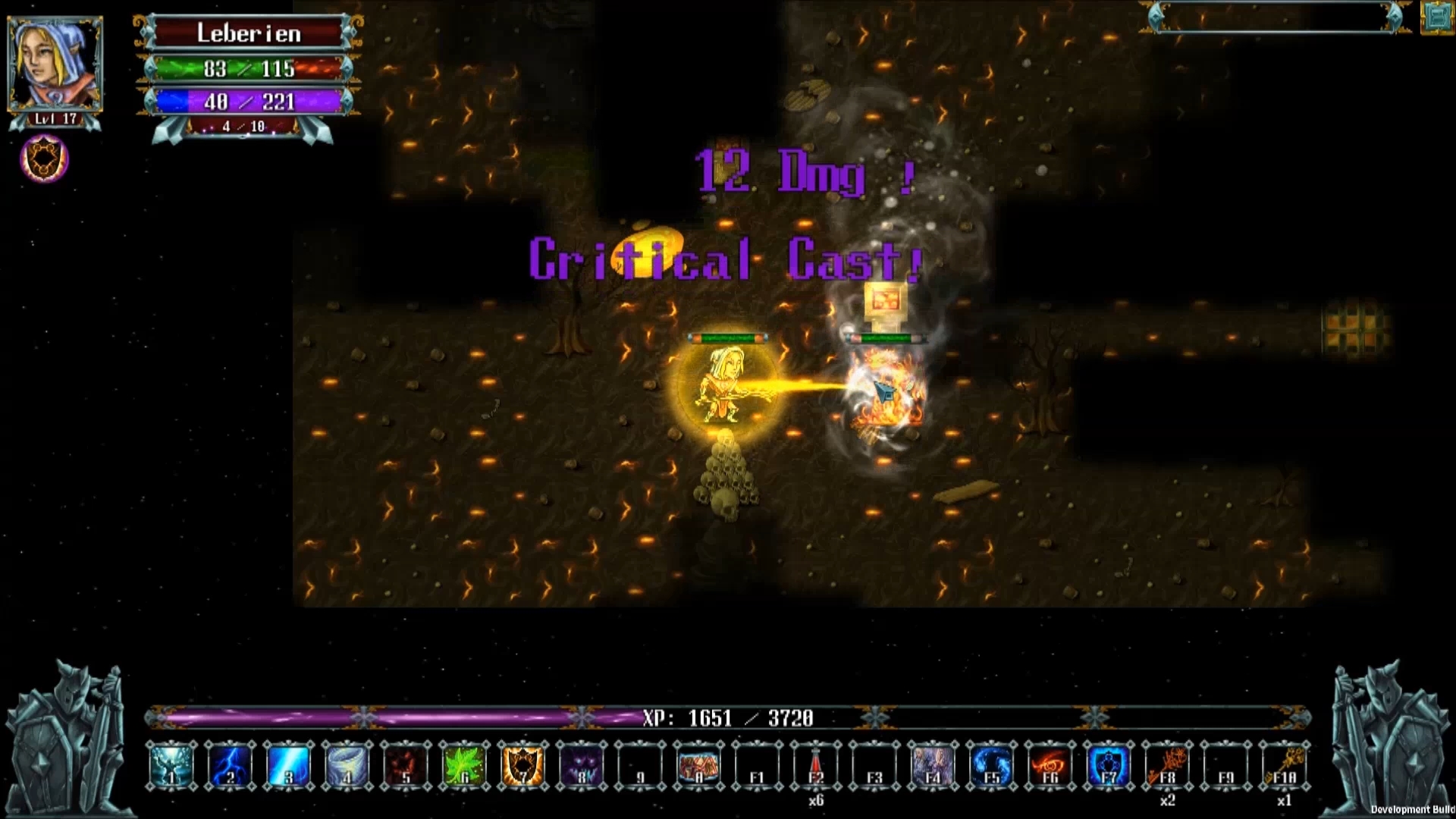 Master Wachnitz is pitching for a spring release. Given the game’s current state, I’d say that this was a trifle ambitious. I’d personally shoot for an autumn date. This gives ample time to add more content to the game world and a few extra features. It also enables a vital bug test and polish phase, which is essential considering the design is targeted at an easily accessible, newbie friendly game.

The core gameplay is solid and implemented with zeal. The random nature of the card skill deal means that no two games are the same. This makes the gameplay fresh and coerces the player to try out new strategies. I heartily recommend Rogue Empire as it hits the sweet spot in terms of playability and difficulty. Its attractive price point also puts it in a great position for anyone looking to take their first tentatives steps into a classic roguelike. But don’t take my word for it. You can try out the whole tutorial campaign for free or a nominal sum if you are feeling generous. So what have you got to lose? Perhaps only your soul, as you battle demons in the Rogue Empire of Ethistos.