Solace Crafting is the latest Steam Early Access entry in the popular survival-crafting genre. It’s a good start, but there’s a long way to go.

Solace Crafting currently has no background story, world description, or any sort of non-gameplay-related description. But that’s okay; it’s only just been launched into Steam Early Access. What it does have is a procedurally generated, ‘infinite’ world to explore to your heart’s content … or until the game breaks on you.

In Solace Crafting you create a character and spawn into a pleasant-enough looking fantasy world. You run around and punch a few trees and rocks (really!) and before you know it you’re swimming in raw materials, creating forges, woodworking units, tanneries, and other crafting stations, building houses of which peasants could only dream and crafting armour and weapons that look pretty impressive.

But once you’ve done that, at the moment there’s not much else to do.

The graphics in Solace Crafting are a mixed bag.

The world is procedurally generated — which I love, by the way! — but it just looks so … similar. Everywhere you go everything looks basically the same as everywhere else. There are some different ‘biomes’, but ultimately you wander around and scavenge stuff from what’s about you, and any given square kilometre of a particular area looks much the same as any other; what’s there looks really nice, but it needs a lot more variation in flora, fauna, and environmental textures.

The character creator is hilarious, especially randomising your character. It’s a good laugh, but I hope it’s unfinished — it’s rather difficult to make a character who looks human, let alone being even remotely attractive. Your best bet is to stick with the defaults. The character animations aren’t great, with jumping looking particularly humorous. You’ll also sometimes find yourself sliding across the terrain rather than walking on it, or getting stuck in a looping jump. 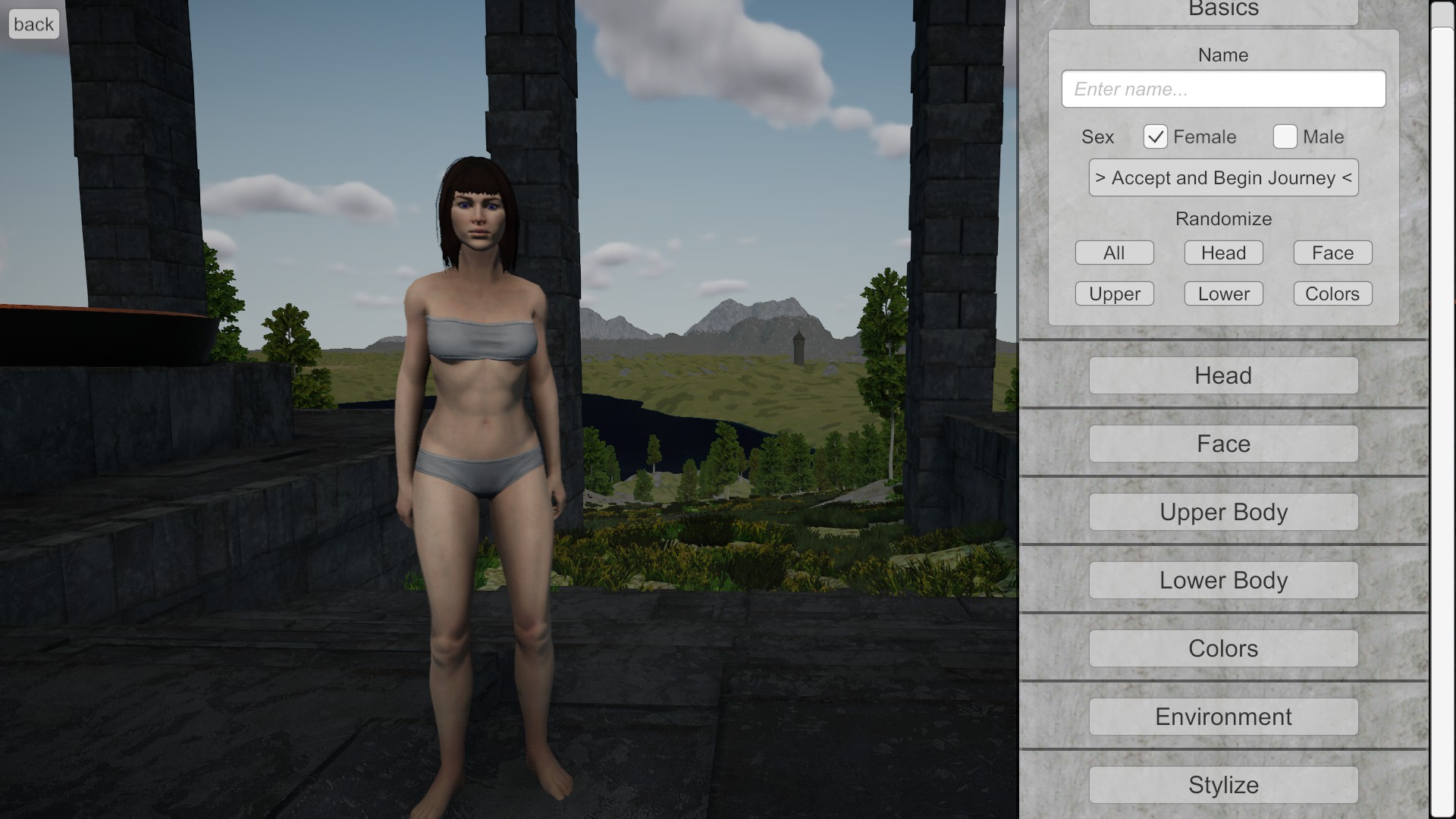 Lighting effects are nice, but there are some shadow bugs, and the building tiles sometimes look rather poor, with odd reflections. The sun doesn’t look quite right, but the secondary lighting effects look nice, and I do have to wonder, too, why my player character has some sort of glowing aura that lights up the terrain around her … . There are some basic weather effects, but these, too, need to be improved. 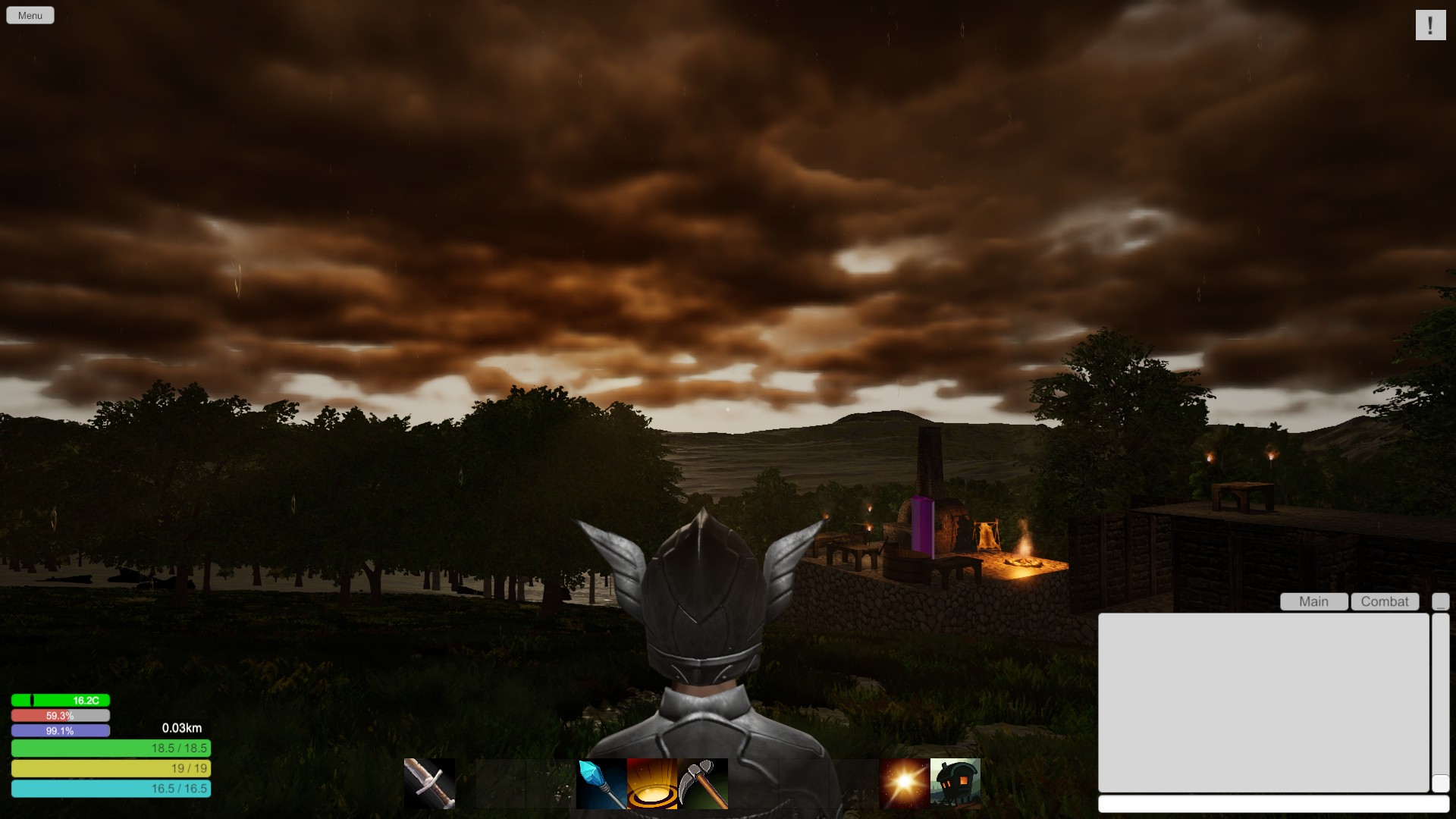 The interface is pretty unintuitive. It’s not quite like any other game you’ve played, so even when you think you understand it, it behaves just that little bit differently, and everything you try doesn’t quite work out the way you plan. It’s also quite ugly in places. Overall, it seems rudimentary and basically functional, but needs a lot of work to make it intuitive and to work as intended. The skins and font should be replaced, too, as at the moment they look like placeholders.

Building, which is a big part of the game, is so much harder than it should be. As I was starting out, sometimes I felt like throwing my laptop out of the window as I tried to position parts and build and upgrade them. And then the upgraded parts didn’t function correctly: windows kept swinging open and shut, while doors either wouldn’t close or stayed closed no matter what I tried. 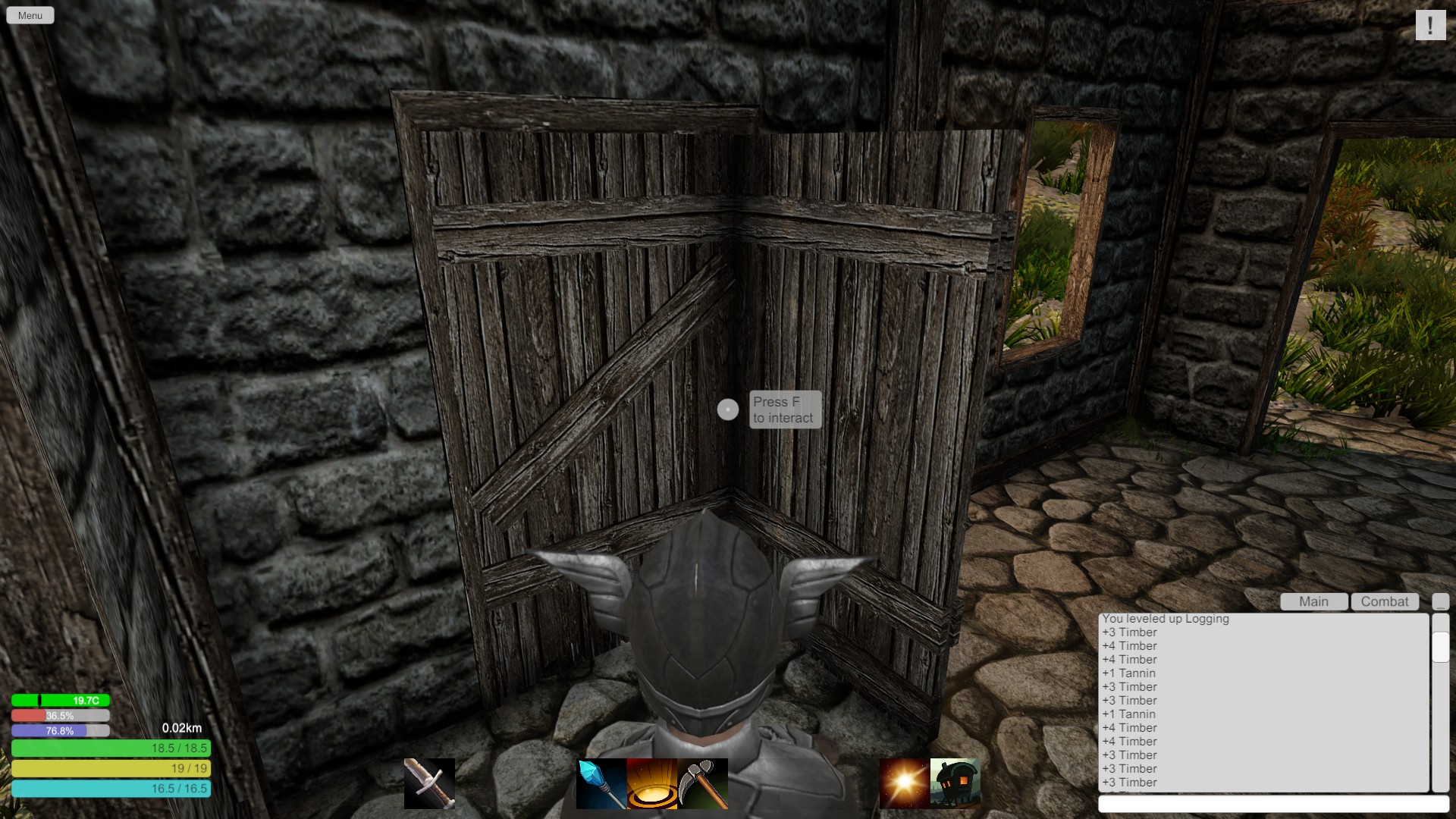 On the sound side, there’s not much to be said. Sound effects are minimal, with only a few occasional sounds played here and there, and the one music track sounds like an instrumental version of some sort of heavy rock ballad; it doesn’t fit the setting. This aspect of the game needs major work.

There are a few settings, but many of them are only accessible from the Unity launcher. On top of that, there’s no way to adjust the graphics settings from within the game — why do developers keep doing this!? — so you have to restart if there are performance issues. Even on the default settings I found quite a bit of stuttering when travelling some distance from the starting point. There are a handful of grammatical errors, too, but it’s not too bad. 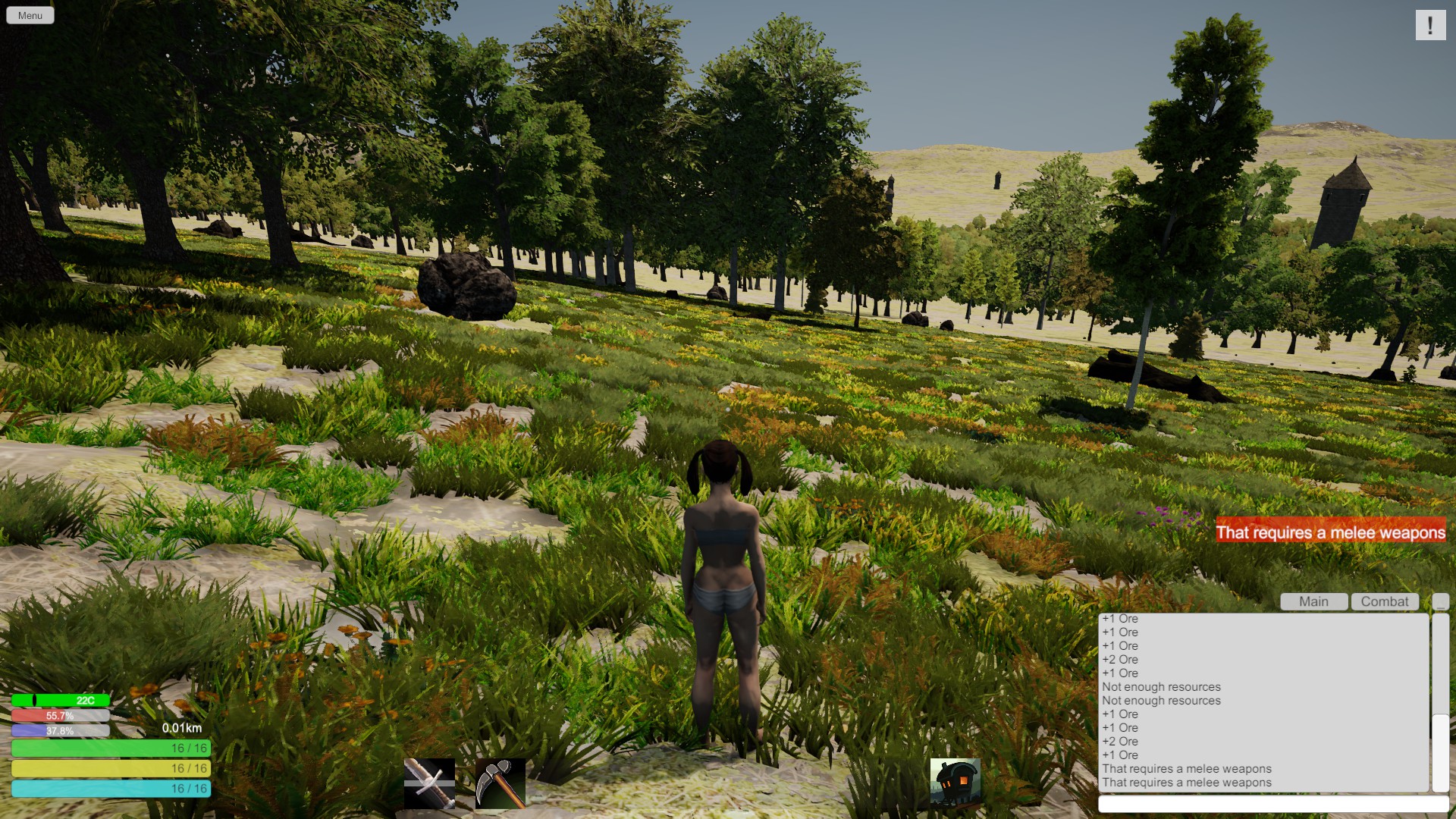 Solace Crafting is a survival-crafting RPG. At the moment it’s fairly limited in all aspects. Survival is limited to food, water, and, in some areas, temperature. Keep an eye out for carrots for food and water and as long as you stay out of the mountains, temperature won’t be a problem either. 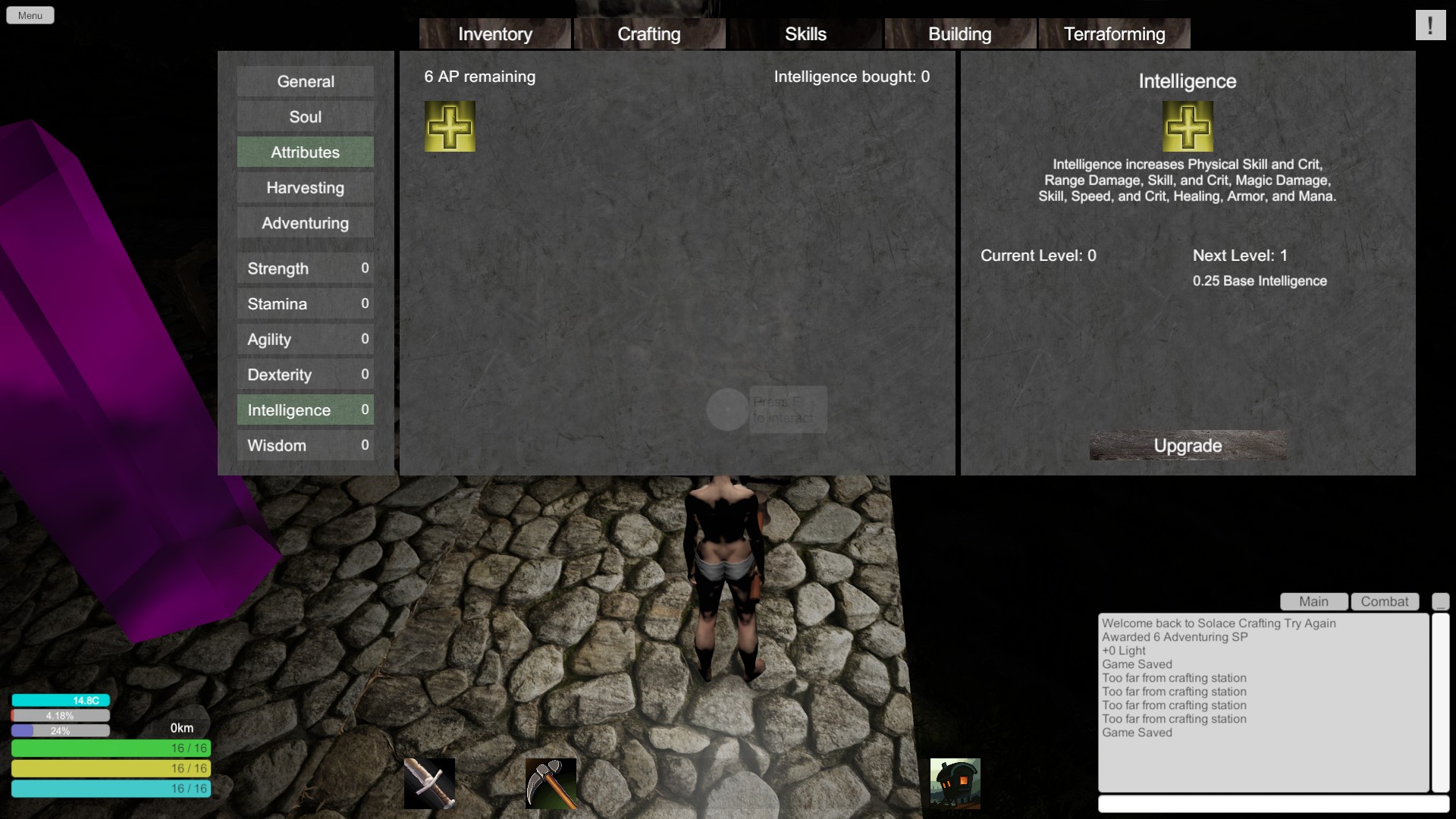 Crafting is getting there, with the usual harvesting options of wood, stone, ore, and plant material. It’s a bit clunky, but it basically works. There’s a reasonable collection of crafting stations to build to unlock recipes, but in these games more is almost always better. Inventory size and stacks are miniscule, so you’ll spend a lot of time carting materials to and fro. Weapons and armour are essentially just different skins on certain bonuses; a level 1 short sword is the same as an axe in everything but appearance.

The game includes building functionality, too, which is good when it works, but there’s no real in-game need; there’s no need for protection from anything, so all you really need is a flat platform near the ground for supporting all of your crafting stations. 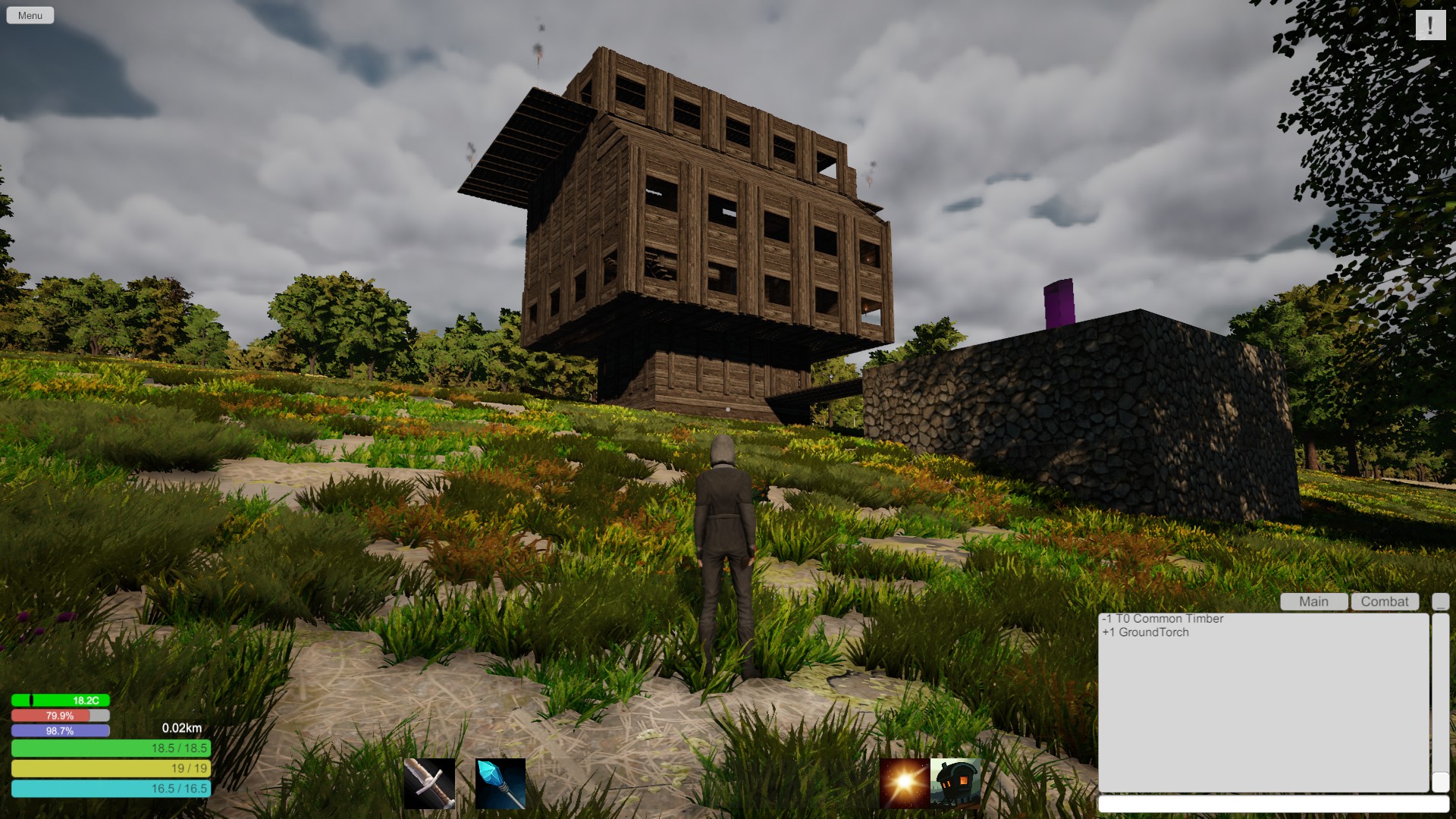 And then there are the RPG aspects: level up your character by killing enemies (only one so far, I think: a little elemental-like creature); craft weapons and armour with various bonuses; and spend points in adventuring skills, learning spells or special abilities. The framework is there and seems reasonably solid, but there’s just not much there yet. 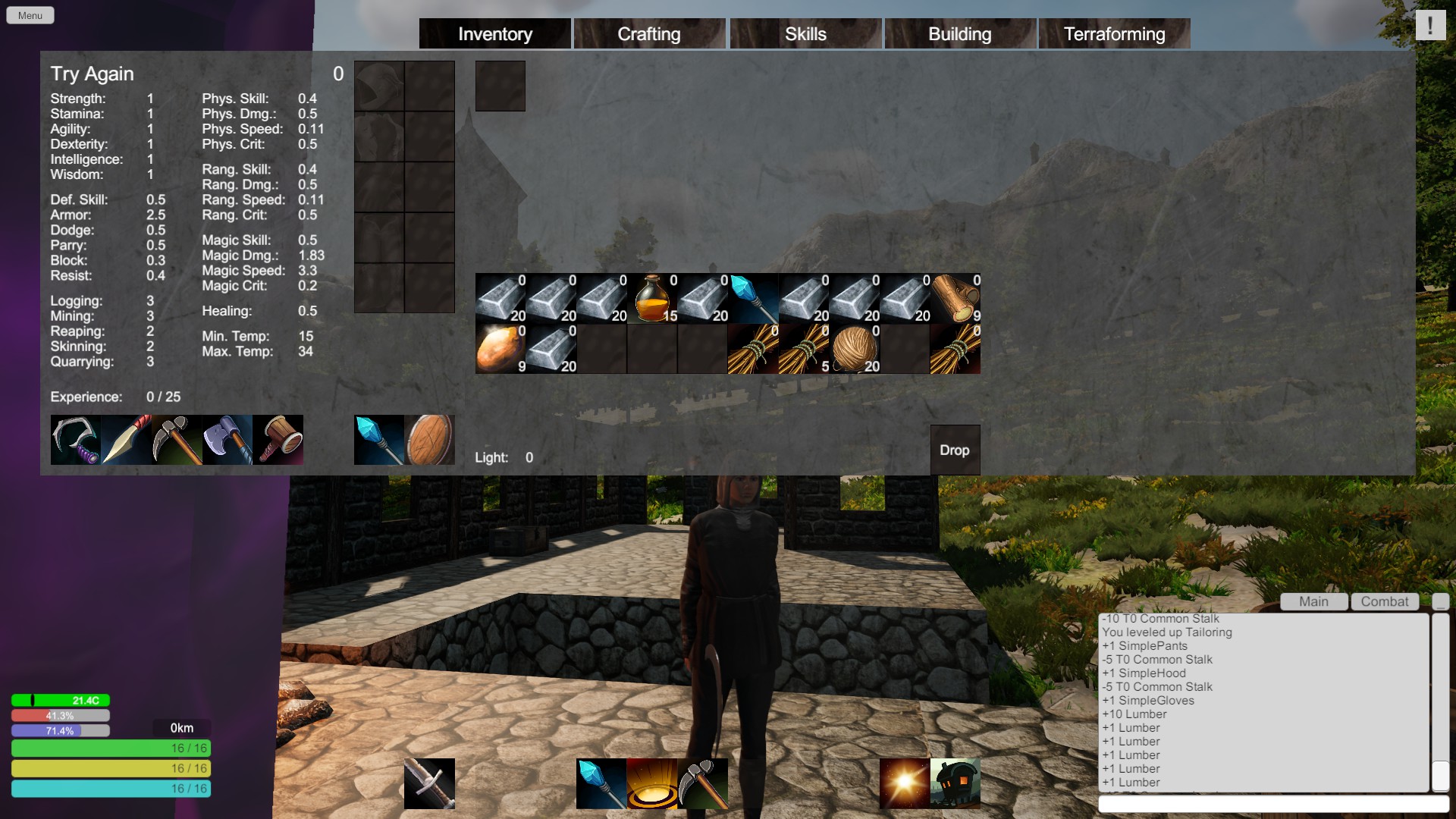 Solace Crafting’s gimmick is that it’s “distance based”. You start at a solace –- an in-game teleporter and storage –- and the further you travel from it the more interesting the world becomes, with more dangerous enemies, higher rarity components, and better upgrades. You can build your own solaces to form a network and build structures around them to keep them safe from harm. Eventually this should grow into a really cool feature, but as with the rest of the game, at the moment it’s really just the framework. 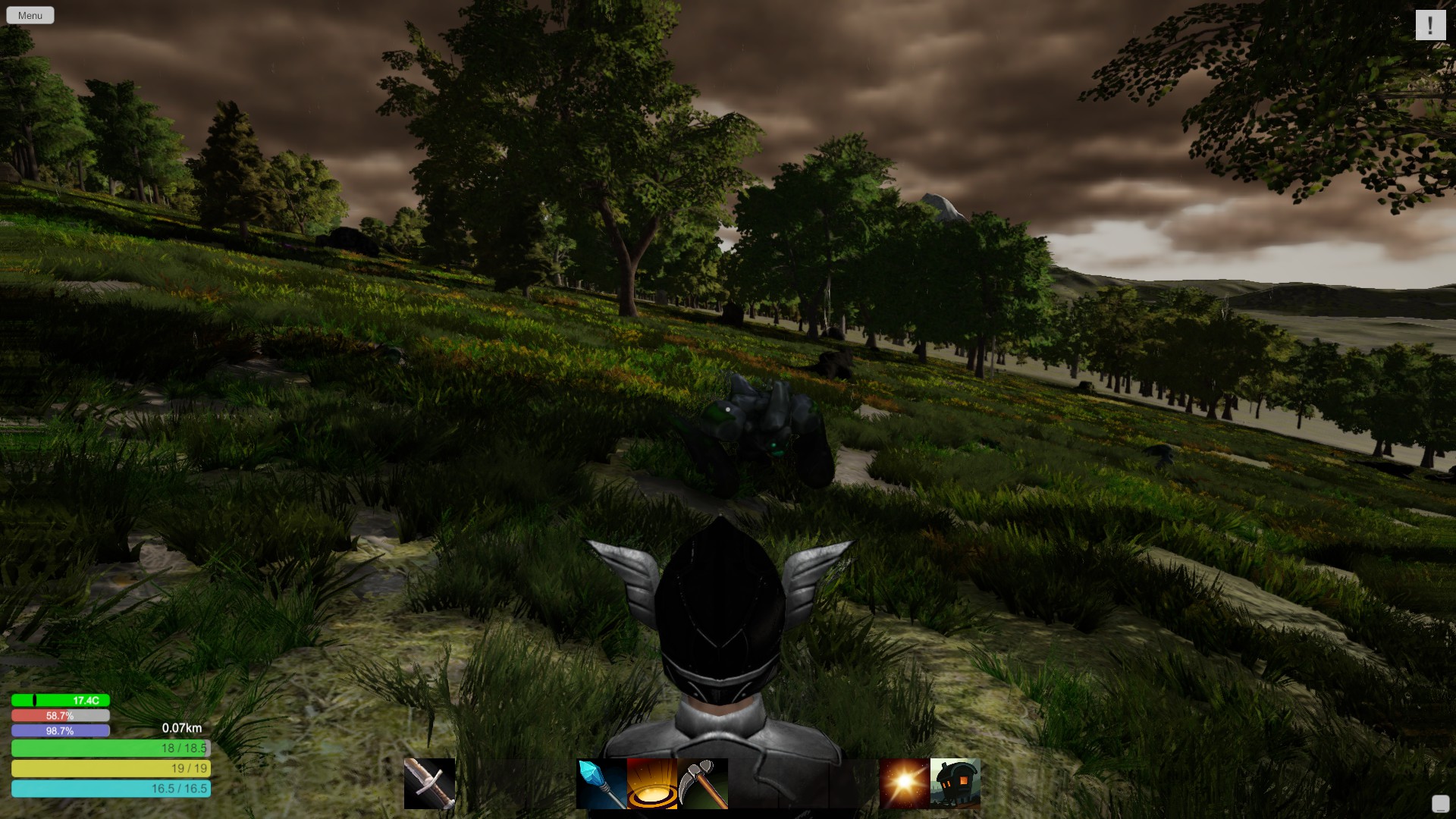 Being a new Early Access title, the game has a huge number of issues: fiddly interface, terrible enemy AI, actions that don’t work all the time, no descriptions, no tutorial, a vast empty world, poor controls, storage containers that steal your stuff, and, at least until the latest build, a terrible bug that wiped out everything you’ve created with no way of getting it back, … , there are just so many bugs at the moment. Most of them are minor and can be worked around, and playing an early EA title you have to expect that sort of thing to a degree. But the developer himself probably says it best: “WARNING! Do not buy into early access if you are not interested in potentially game breaking bugs and maybe running out of things to do.” 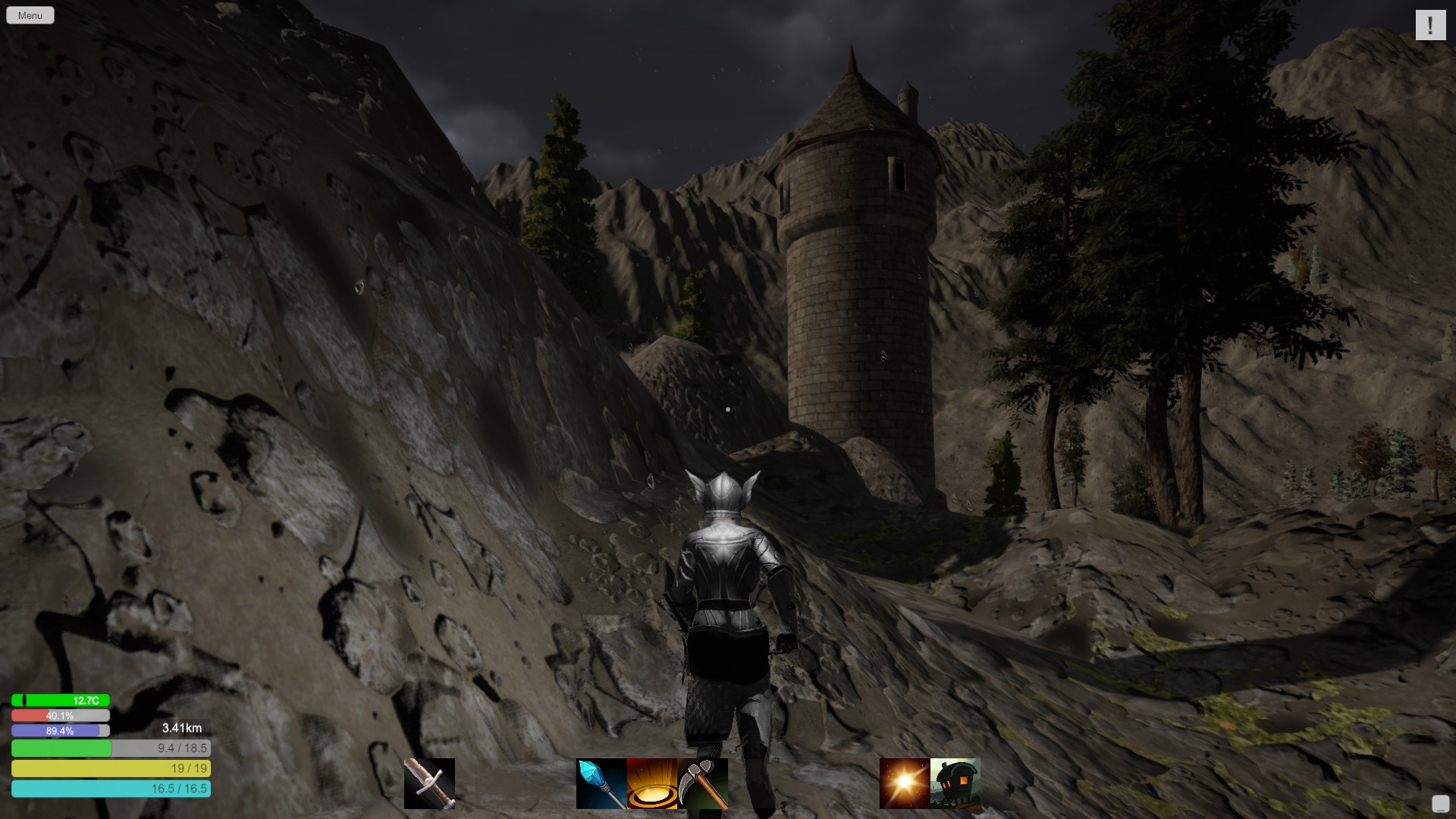 I’ll be completely up front here. I really want to recommend Solace Crafting, but it’s not quite there yet. The interface is fiddly and unintuitive, there’s not much content, and some of the bugs have been exceptionally frustrating.

If you’re a fan of survival-crafting games, like I am, and you’re interested in seeing them evolve, like I am, then you should definitely keep an eye on Solace Crafting. The developer seems genuinely dedicated to making a game that will evolve the genre, and I honestly hope that he succeeds; I want to play the game he wants to make. But at the moment, I’m really sorry to say that it’s probably best to wait and see what happens.