The creative RPG elements and complex NPC interactions are great additions to the zombie survival genre, but at the moment the interface, bugs, and general lack of polish make Stay Alive: Apocalypse a hard game to get into.

From what I can pick up from playing, the game is set during a zombie apocalypse. You wake up after having been given a sort of vaccination against the virus that has turned others into zombies, but it seems that it’s only temporary: a zombie attack will infect you again, and there’s a chance you’ll wake up one day, infected. It’s a just a matter of time before you’re a zombie, really.

Anyway, when you start out, almost everyone in the town of Huzurkent (Turkey) and its surroundings has already been infected. You need to be sure you have water to survive and a way of producing power if you want to be able to see at night (there are no candles or torches in Huzurkent, at least from what I’ve found so far anyway), something to eat, and, obviously, a way to protect yourself from the zombies.

Stay Alive: Apocalypse is played in first-person view, with the world rendered in cartoon-like cel-shading. Models seem to have relatively low polygon counts and textures generally seem fairly unimpressive, and the world itself seems sparsely populated by objects both living and inanimate; once you leave your house or apartment the game doesn’t provide a convincing imitation of a modern-day town. 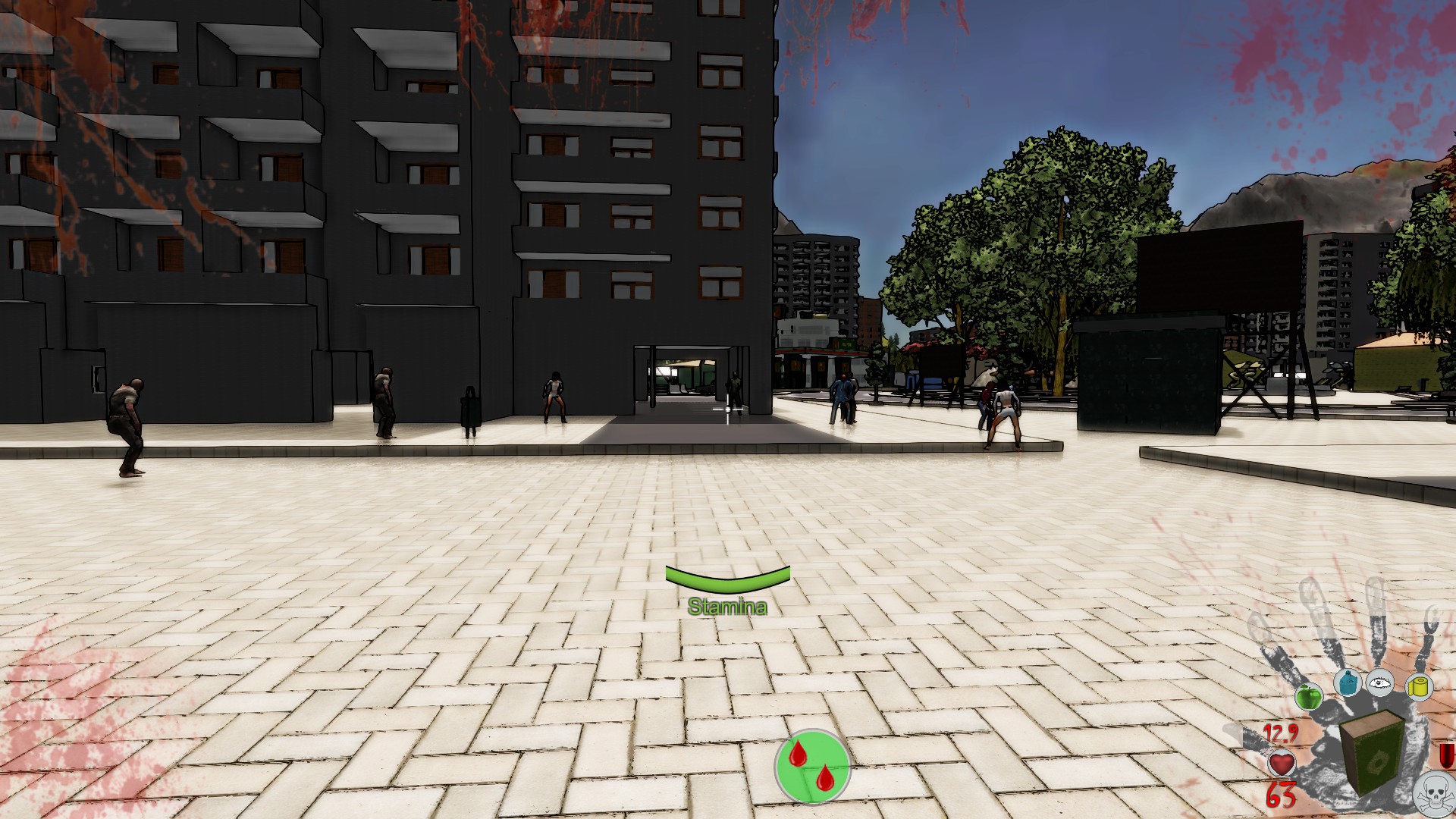 Indoor graphics are better, but even then you’ll encounter repeated objects, identical floor layouts and interior design, and many of the same models and textures over and over again. Some repetition is fine, but there’s nowhere near enough variation here, particularly in the more inhabited areas. Some of the textures are rather bland, too.

Character graphics aren’t too bad, until you see them move; animations are laughable, looking wooden and completely unrealistic. The first time I saw a female NPC walking towards me like she was riding a horse I couldn’t help but laugh. 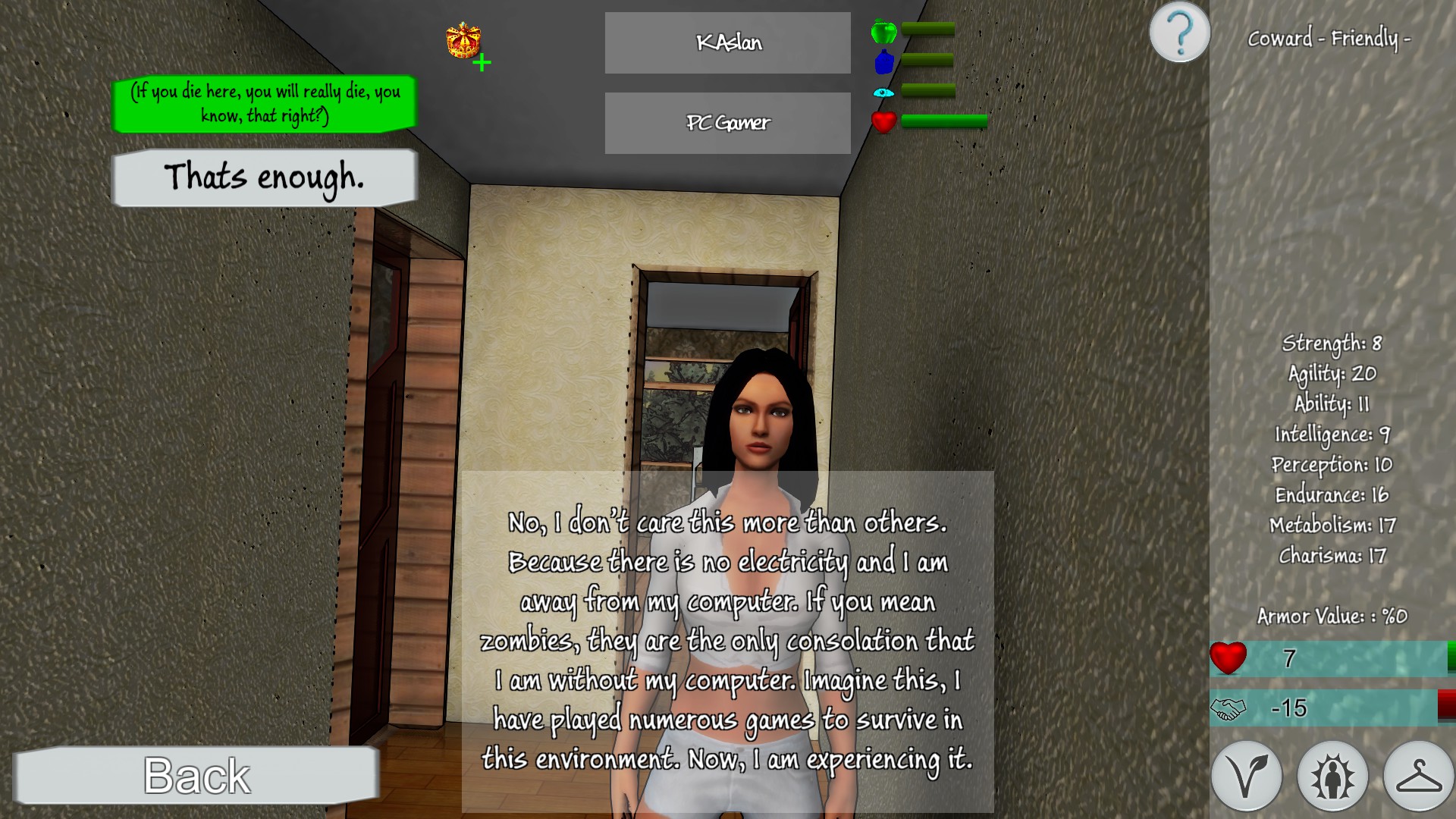 There are also numerous graphical glitches and bugs, from clipping issues to flickering textures, poor reflections, lighting issues, occlusion and portal issues, … the list goes on. Basically nothing looks quite right at the moment. You’ll often find yourself stuck on world geometry, too, though so far I’ve always been able to get out of it through running, jumping, or reloading.

The interface is interesting, bordering on unusably cryptic. The poor English grammar and translation (from Turkish, I think) and tooltip windows that go partially off screen definitely don’t help, but even once you know basically what you’re doing the interface is still confusing. It really shouldn’t be so hard!

Sound needs a lot of work, too, with volume normalisation of effects being way off and speech when interacting with NPCs being some of the worst I’ve heard in any game; it would be much better without it. There’s a subtle background music track that works well, but I think it’s the only one.

The game has plenty of graphics and sound options to play with. 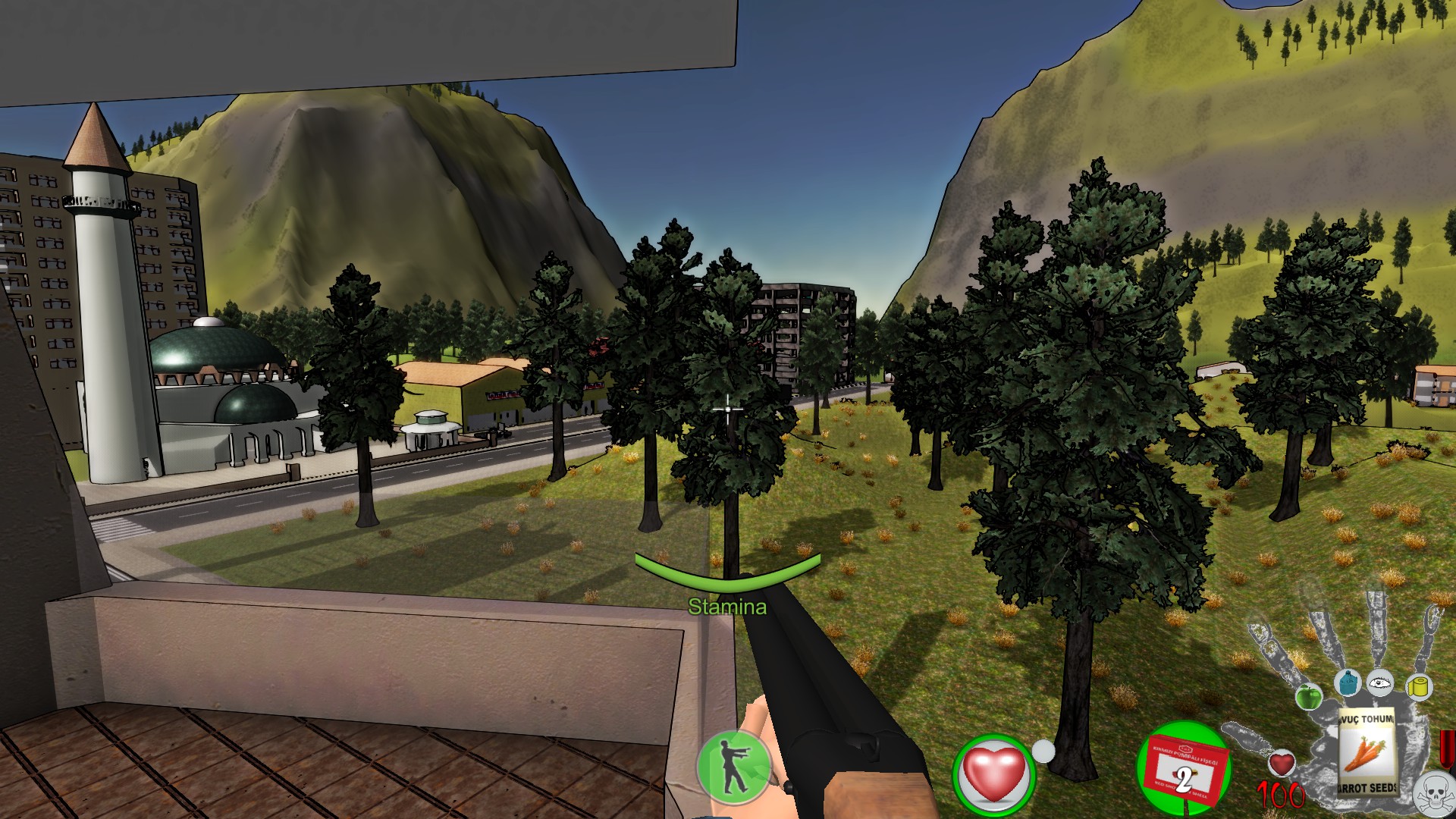 The blurb on Steam says that the game “will offer you an indie zombie survival game which is in a sandbox, random generated world and presents RPG elements.” That summarises the gameplay reasonably well.

If you took the zombie survival-crafting elements of 7 Days to Die, the near-empty and somewhat restrictive world of The Long Dark, and the roleplaying elements of Fallout 3, then mashed them up until none of the bits quite worked right, I think you’d be pretty close to the current state of Stay Alive: Apocalypse. 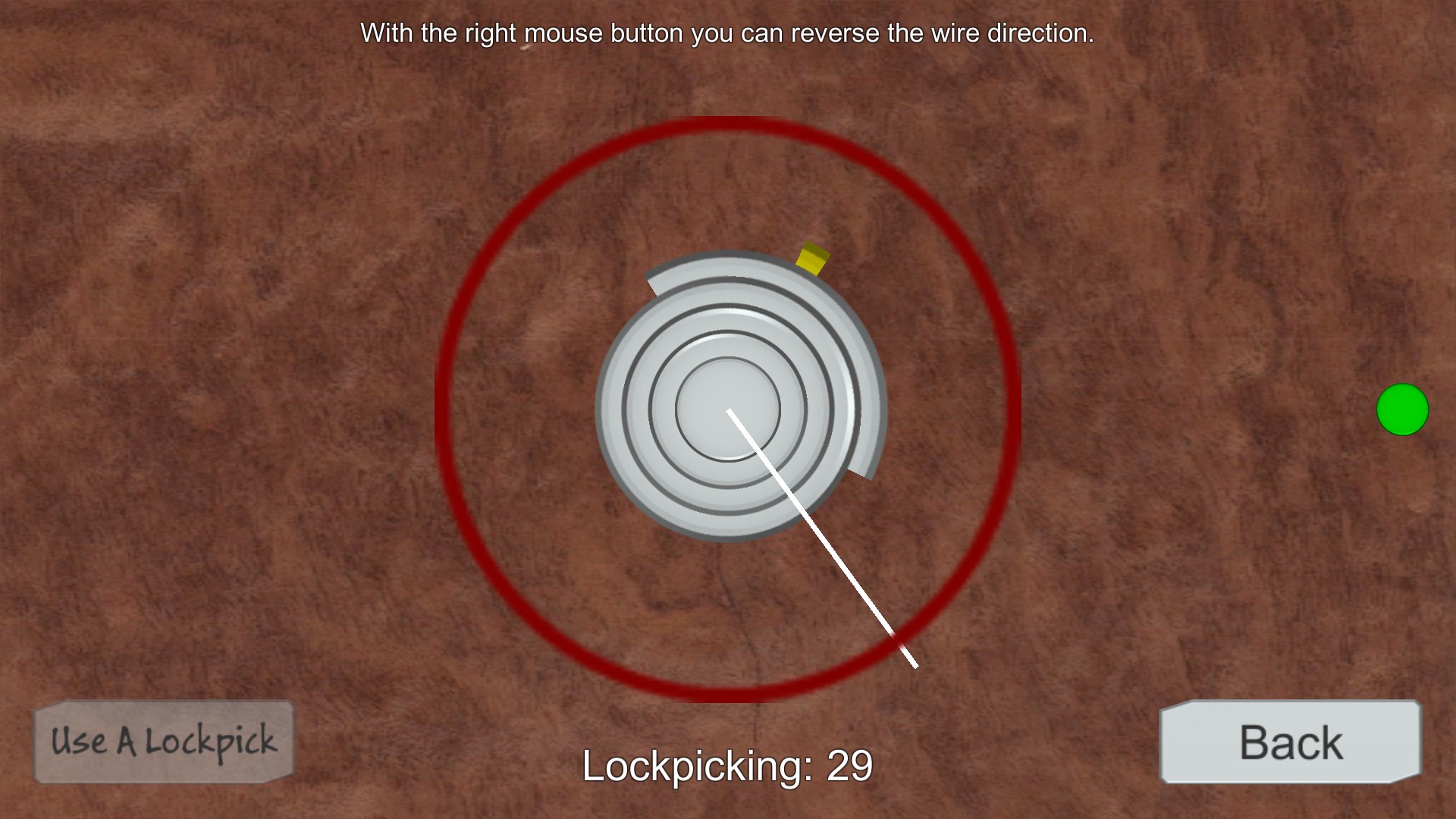 The game gives you a nice gentle tutorial that mostly makes sense. This introduces you to the game world as well as the confusing interface (you’ll forget some of it; don’t worry). It basically works okay, but then it finishes and you’re given the chance to create a new game. The interface presents you with all sorts of RPG-like traits, abilities, skills, and choices — which are actually really cool — and then drops you into the randomly generated game world, where you move like a crippled elderly person and keep getting stuck on objects in the game world.

It’s a wonderful idea, but everything just seems a little bit off, like it’s a tech demo or prototype. From the graphical problems, awful voices, and poorly normalised sounds already mentioned; to the clunky and unintuitive interface, the AI that has zombies just standing around doing nothing until they see you, and the way that everything you do seems to not quite work; the game shows so much promise, but falls down in so many ways.

You start off in a randomly generated part of the city, with parameters based on the region you select. There’s urban, suburban, and a sort of semi-rural area, but the number of zombies in the game seems unrelated to the region. Your starting Charisma determines how many NPCs will be your buddies, but at the moment they seem very flaky with unreliable AI and personalities that are all over the shop, so you might be better off ignoring that option for the moment. 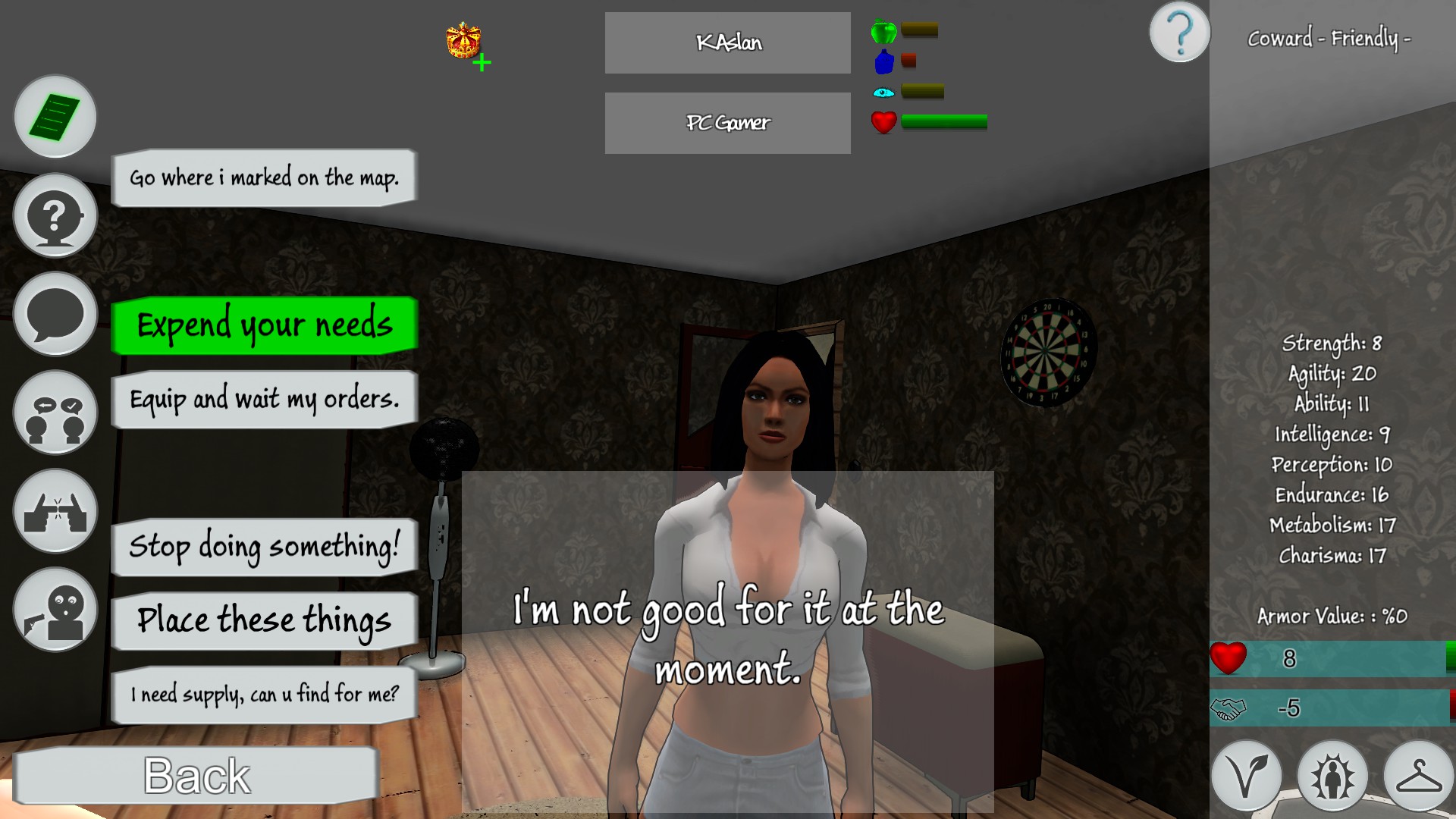 There’s no building, but there are a number of existing houses and apartments that you can fortify, though the options seem very limited. You can upgrade existing doors and windows, craft traps (if you can find the relevant recipes and parts), and move large bits of furniture around to create makeshift barricades, which is a nice touch. Nightfall is also easy to miss while you’re indoors, with light going from full to nothing in a very short time, potentially trapping you. It all just seems a bit too fiddly and hard to understand at the moment. 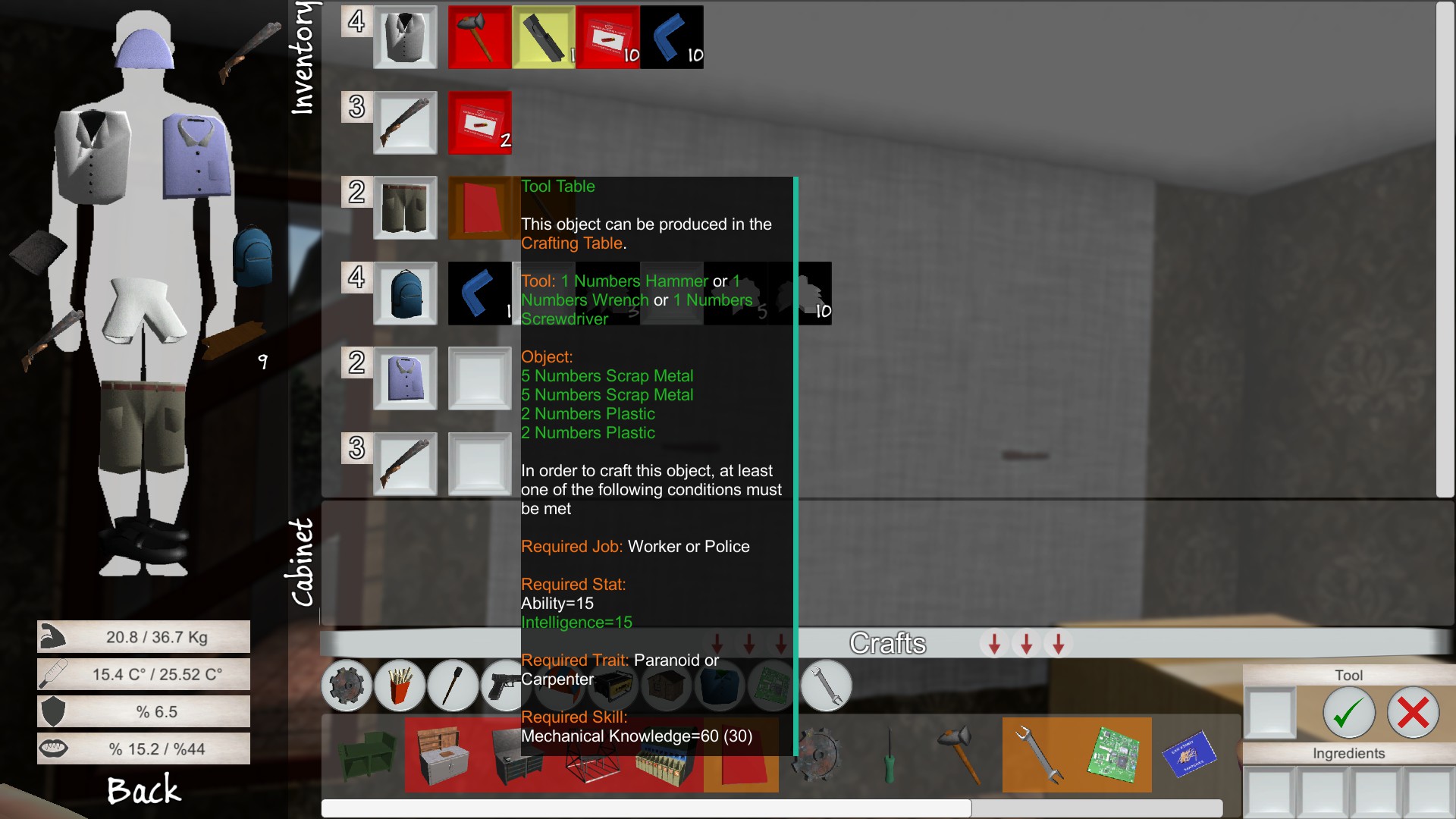 And I think that’s the crux of the problem: nothing works quite right. Sure, the game brings some clever new ideas to the table, like pocket- and size- based inventory management and complex NPC interaction, but most of its ideas seem to make the game less fun than it would be otherwise, by design or by accident. When you couple that with the huge number of bugs, graphical glitches, unreliable AI, and chance of random zombie death every time you eat or sleep, it all becomes a bit too much.

In preparing for this review I collected a huge number of notes about bugs, some of which have been fixed, some reported, some changed, and some still remaining, but it doesn’t really seem useful to list them all here given that the game is in Early Access. Suffice it to say that if you want to give Stay Alive: Apocalypse a shot at the moment, you need to be very patient and have a fantastic ability to suspend disbelief. 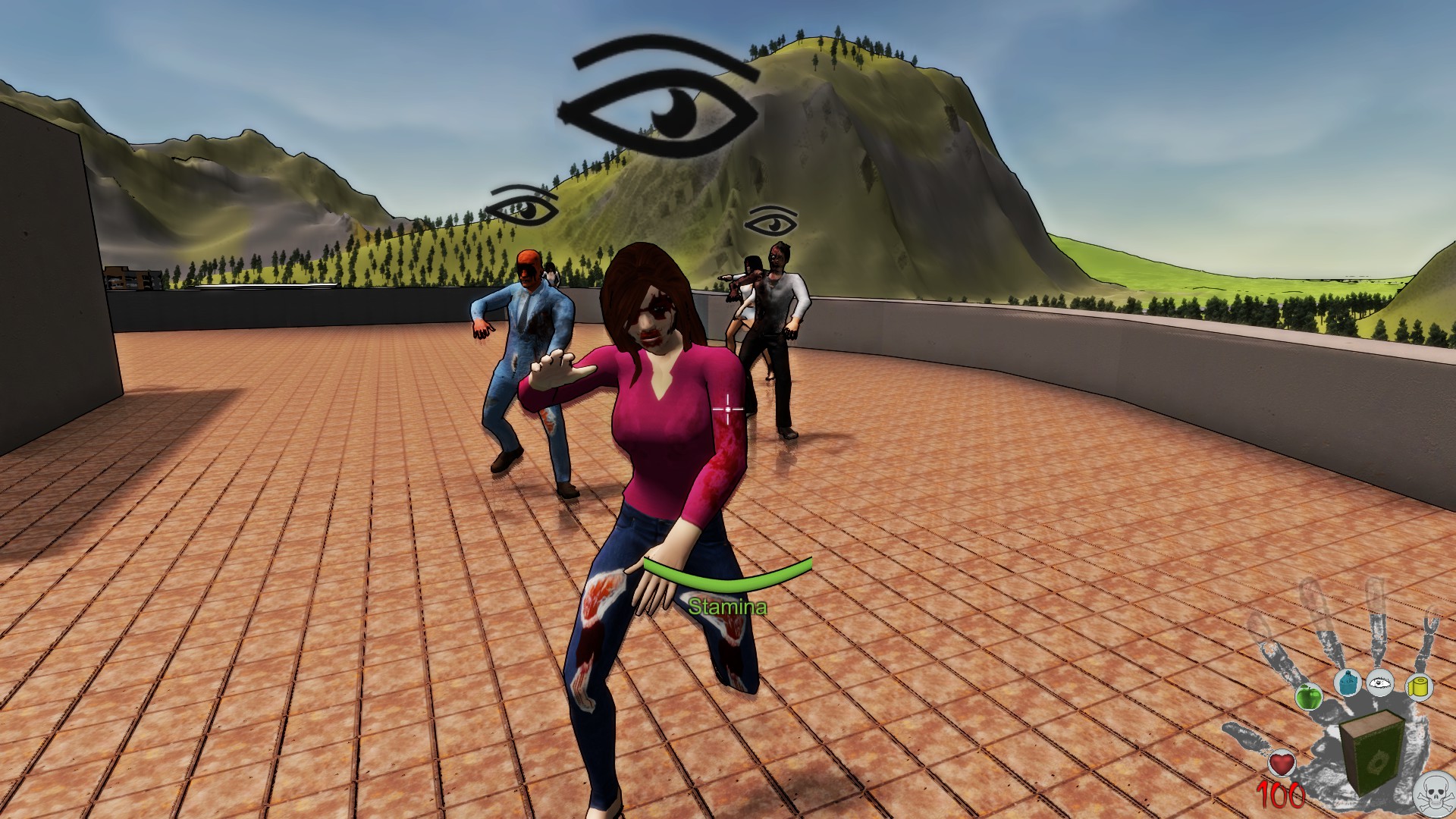 Stay Alive: Apocalypse has a lot going for it. It goes out on a limb and tries to add new elements to the zombie-survival genre — notably interactive NPCs whom you can befriend, equip, and even command; and RPG-like character creation and progression — and although these things don’t quite work at the moment — much like the rest of the game — once you get over the initial difficulty hump (mountain?) there’s actually a fair bit to discover with which to entertain yourself.

However, the world is currently unconvincing and the game is riddled with bugs, the interface is frustrating, and you’ll probably end up dying randomly just because the game decides you should be infected now. I’d love to go out on a limb and recommend it, but in its current state it’s just not quite there.

If you’re a die-hard fan of survival-crafting games and zombies and you’re exceptionally patient then Stay Alive: Apocalypse may just be the game for you right now. Otherwise, it’s probably best to hold off at the moment and see how the game evolves over the next few months of Early Access. It could turn into something amazing … .