How long can you survive after a geomagnetic disaster wipes out the world’s electronics and you crash your plane into a remote frozen wasteland in Northern Canada?

The Long Dark is the debut title for indie developers and publishers, Hinterland Studio Inc. It’s a survival-crafting game that I believe started life as a Kickstarter campaign, then spent quite some time in Early Access on Steam, and was released in 2017.

The game offers three modes: story, sandbox, and challenges. The story mode puts you in control of Will Mackenzie, a pilot who was talked into a night-time flight through hideous weather to deliver his ex, Doctor Astrid Greenwood, and her mysterious case to Great Bear in the northern Canadian wilderness.

In spite of the abominable weather, poor visibility, daytime drinking, and heated arguments during the flight, you were doing a remarkable job of getting Astrid where she needed to go. But then disaster struck, in the form of an apocalyptic geomagnetic event that fried anything electrical and sent the plane crashing into the frozen landscape below.

You wake, alone and injured at the bottom of a ravine, with pieces of your lovely plane scattered about you. First you must survive the freezing night. After that you must heal, escape, and find out what has happened to Astrid.

The graphics in The Long Dark are varied. My first thought on the world graphics was that they are, frankly, disappointing. Terrain and environmental objects are mostly made of sharp low-poly models, with plain-looking textures and poor effects. Everything looks bland, even considering it’s a snow-covered wilderness. Waterfalls look terrible.

Character graphics are really interesting. They’re mostly fairly basic looking, but in a unique way with a lot of personality. Cut scenes seem to be hand-drawn backgrounds with parts of the characters rendered in 3D, which move about as the characters interact. I’ve never seen anything quite like it, but it’s really rather clever. Wildlife mostly looks good, too, with lifelike animations. 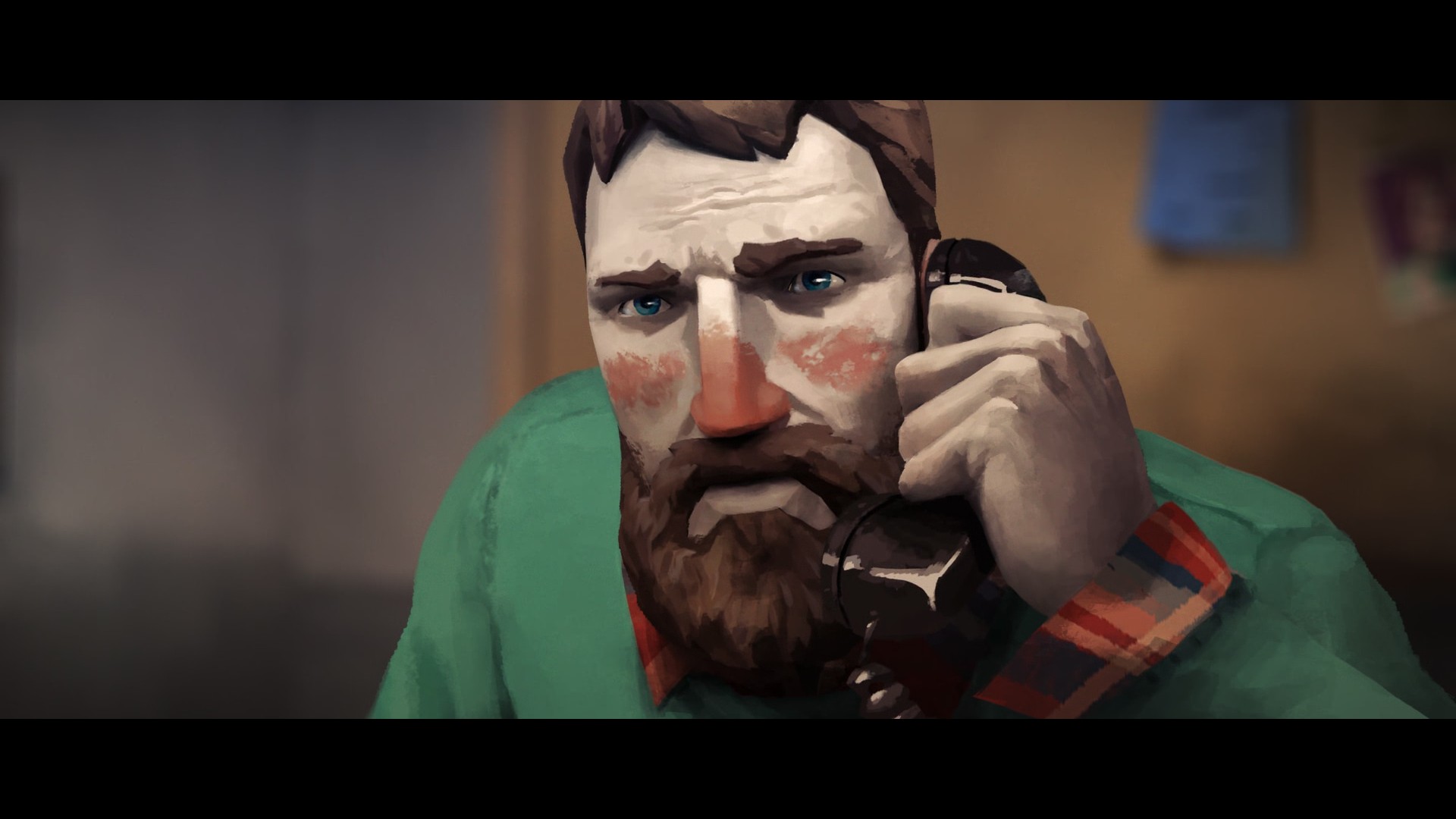 Given the relative simplicity of the world, I’ve been surprised at some of the wonderful lighting effects. Dawn and dusk colour the world differently and sunrises in particular can look absolutely spectacular. The weather is variable, too; a thick blizzard really does make it nearly impossible to find your way anywhere. 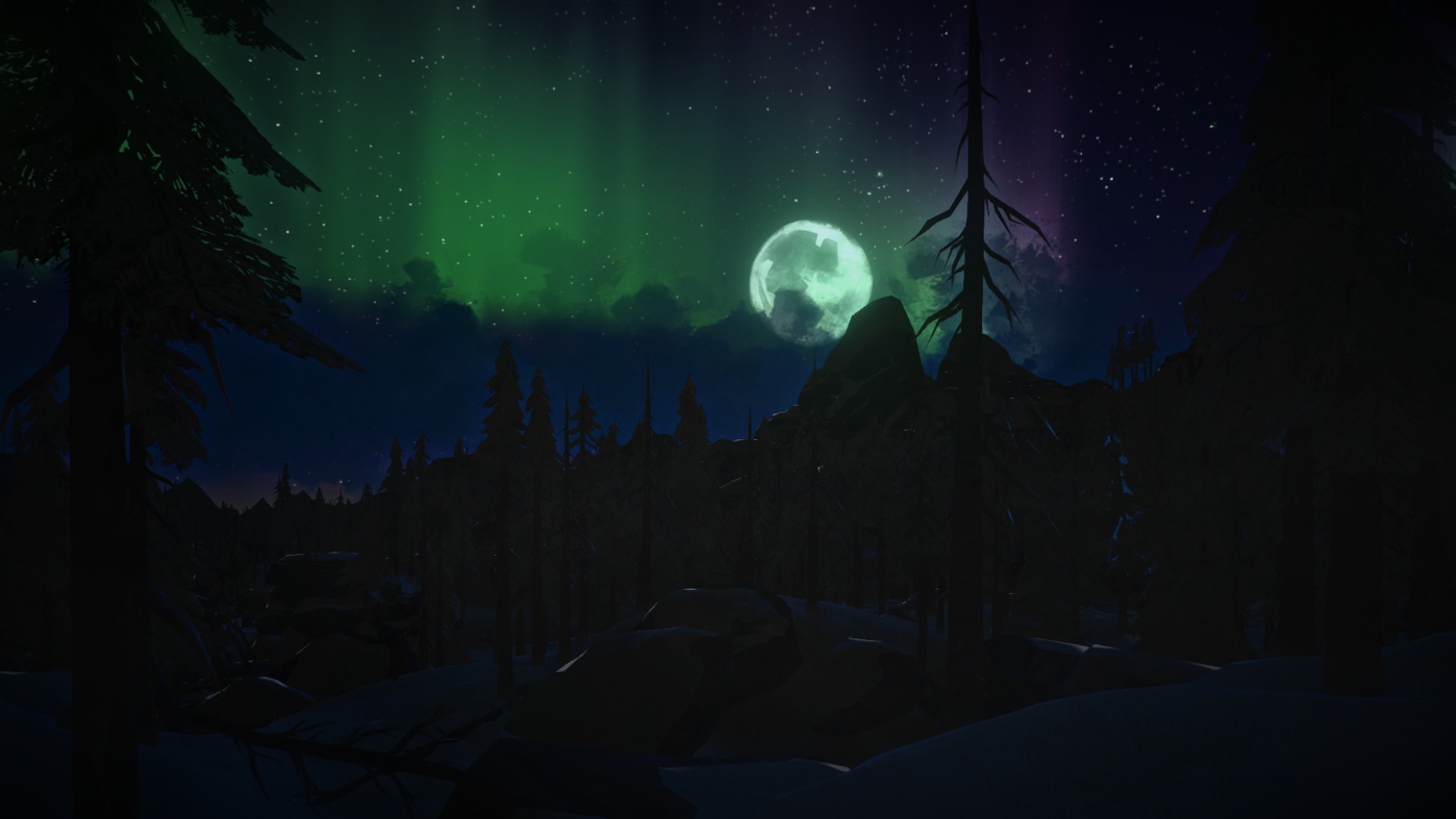 Sound is excellent, too. The game includes sporadic haunting, melancholy music, heavy with pianos and violins; wonderful sound effects such as howling wind and crunching snow underfoot; and high-quality voice work in the campaign. It’s magnificent! However, though the campaign starts out fully voiced, once you have conversation options, the dialogue moves to text only, which is a shame.

The external world all seems to be one large streaming area, but entering any structures causes a fade to black and a brief loading time, which destroys the immersion a little. I also encountered a few small dark triangles in otherwise flawless snowscapes, which looked like tiny holes in the world geometry. I’ve found the interface a bit confusing, too, but I’m gradually getting used to it. There’s also no way to exit out of some scripted events, such as a wolf attack. That makes it a bit annoying when you know you’re going to die, but can’t reload until the script has run its course. There are a few grammatical errors here and there, too, but overall the writing quality is very good. 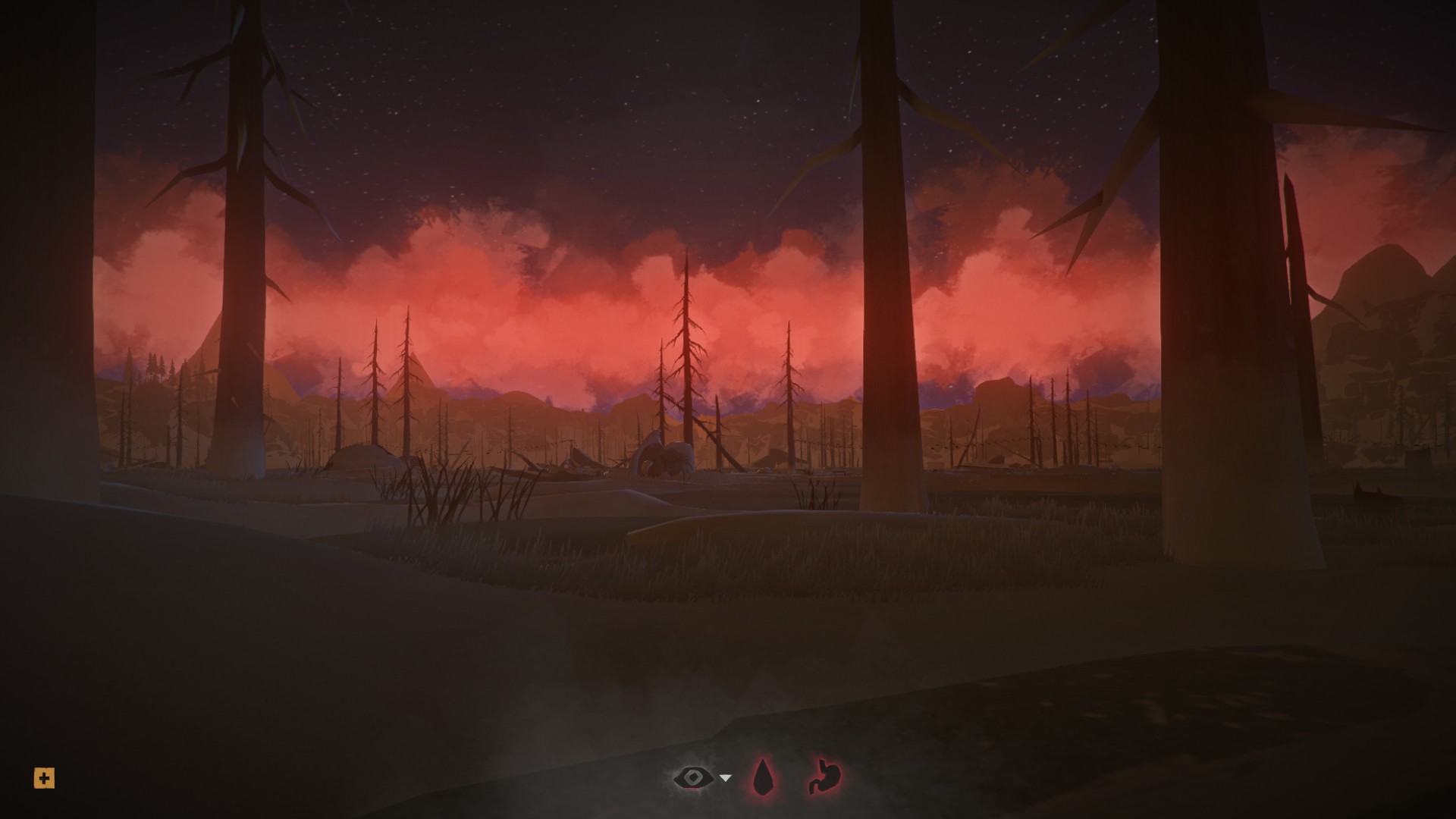 There are plenty of settings to play around with. I run with everything on ‘ultra’ using a GTX1070 and have encountered only a few small stutters, presumably as the game spawns a creature or loads in resources nearby. Given the mostly slow speed of gameplay, I don’t think it’s a problem.

The Long Dark is a survival-crafting game, but it’s much more heavy on the survival, and rather light on the crafting. There’s no building interface and the crafting menus show that there’s not actually that many options there, either. The game is all about managing your four basic requirements for survival: warmth, sleep, food, and drink. The story mode adds a series of directed goals on top of that, and the five playable challenges offer similar short-term goals, too. But ultimately you scavenge for wood to burn and food to eat, and try to find somewhere out of the elements to sleep. As long as you have a fire then the snow-covered terrain about you provides all the water you need. 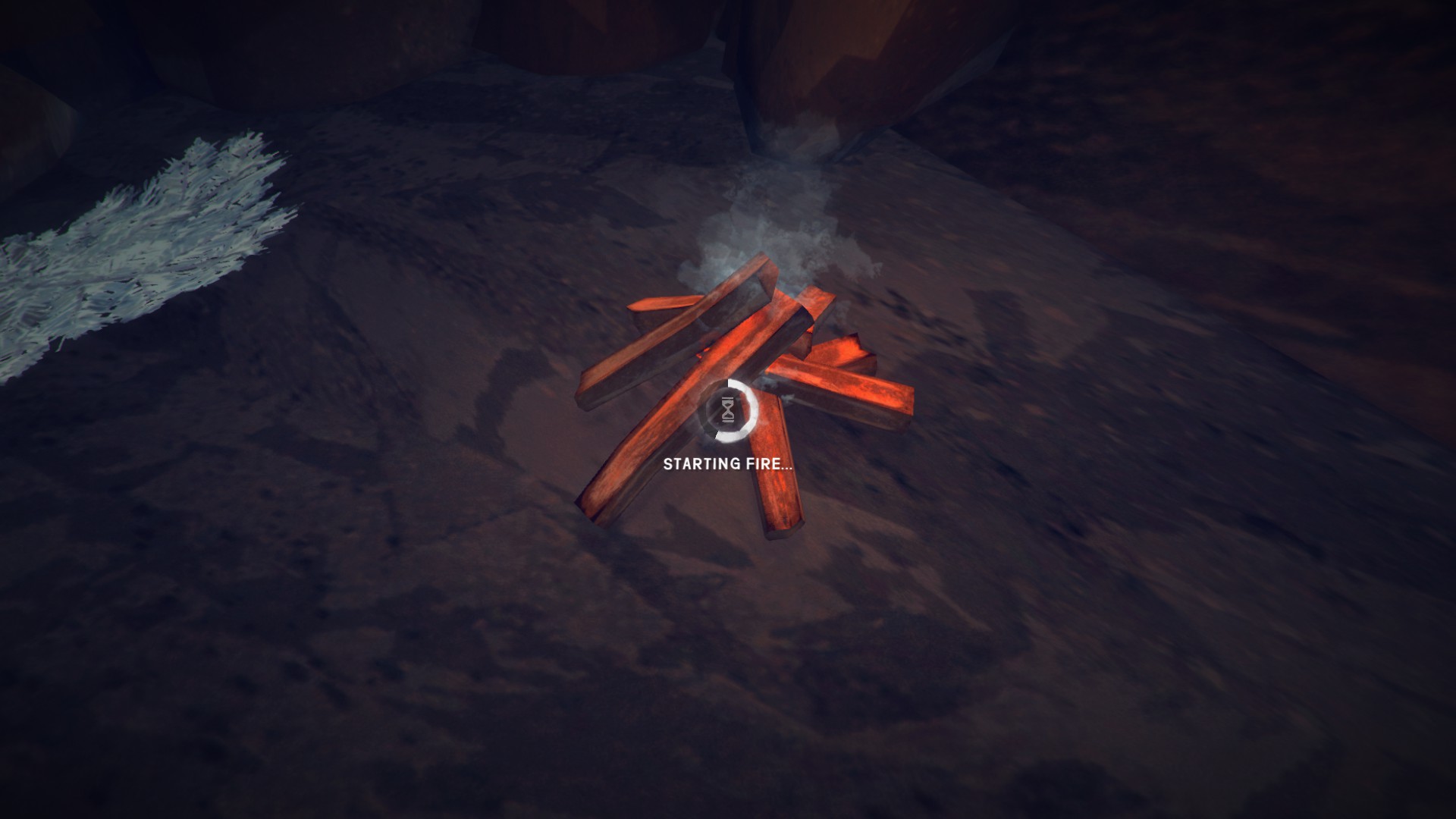 The game world is always the same, though there may be some randomised loot / resources. That’s okay — the island of Great Bear is rather big and, without any vehicles, movement across it is slow — but it does limit most of the actual fun of exploration to earlier play throughs, as once you encounter structures in one game they’re always in the same place.

Having played a few survival-crafting games of late, I confess my first thoughts of The Long Dark were actually rather negative. The interface is confusing — I had to check forum posts to work out how to sleep in cars or melt snow to drink — and missing useful information, like how long it’ll take you to cook something. The randomness in fire-lighting ability was frustrating, too; I think I ran out of matches on Day 3 of my first story mode attempt, through no obvious fault of my own. 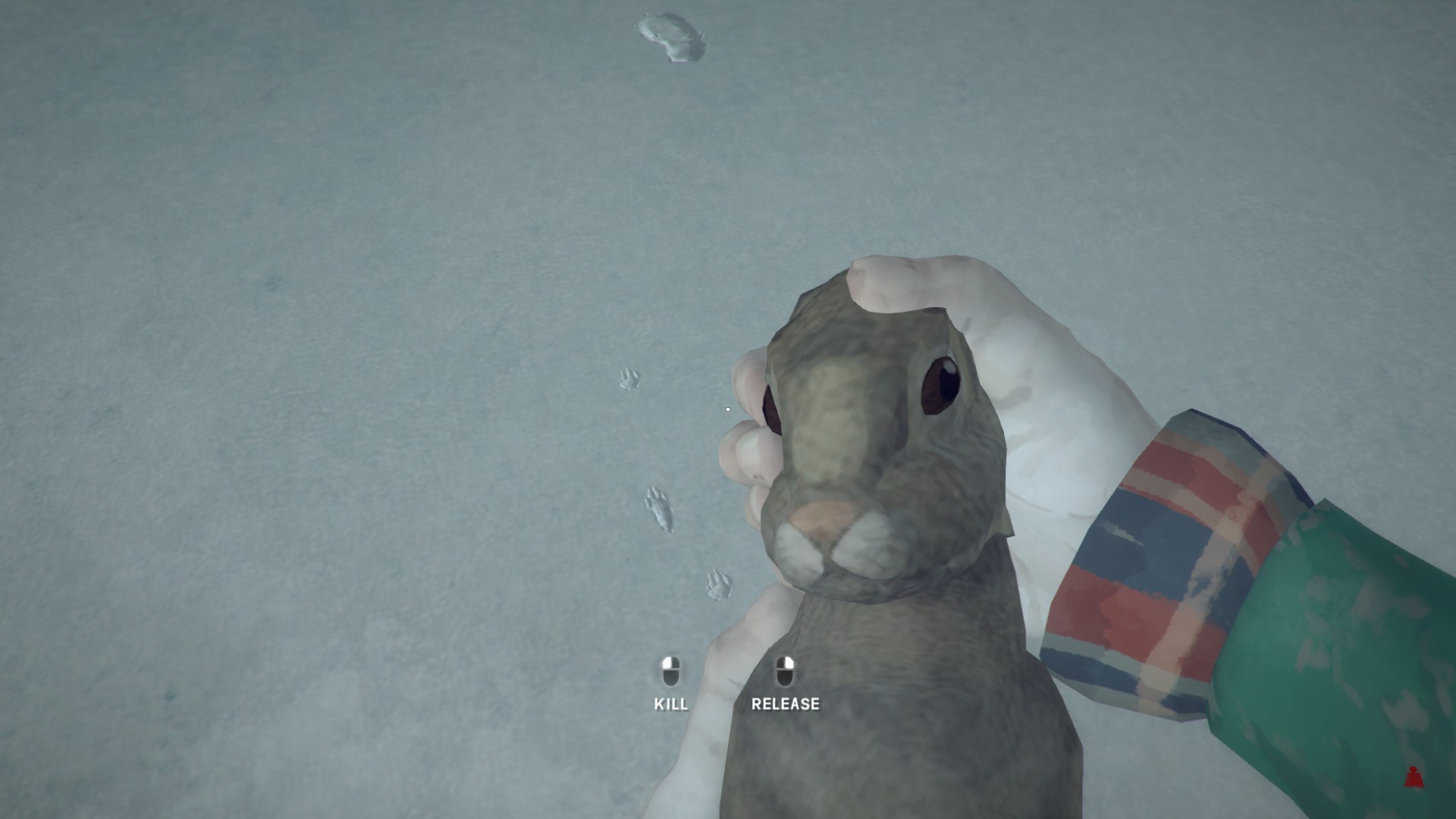 The world seems sparse and empty, too. I know it’s the Canadian wilderness and it should feel like that, but initially at least, I kept wondering what I was missing; there had to be more to it. I’ve come to terms with the gameplay now, and I think that feeling of loneliness and hopelessness is supposed to be that way; the desolate nature of the environment in which you find yourself is by design. It didn’t give a good first impression, though. One thing I still really don’t like is that the game will only let you interact with some things and not others. For example, you’ll spend a lot of time trekking through snow-covered forest, eyes downcast to try to spot twigs or branches in the snow; for some reason you can’t cut branches off of other trees — even those that have fallen down — or use boarded up doors from uninhabited houses, either. Oh, and why on Earth can’t you jump or climb!? I very quickly got sick of that restriction. 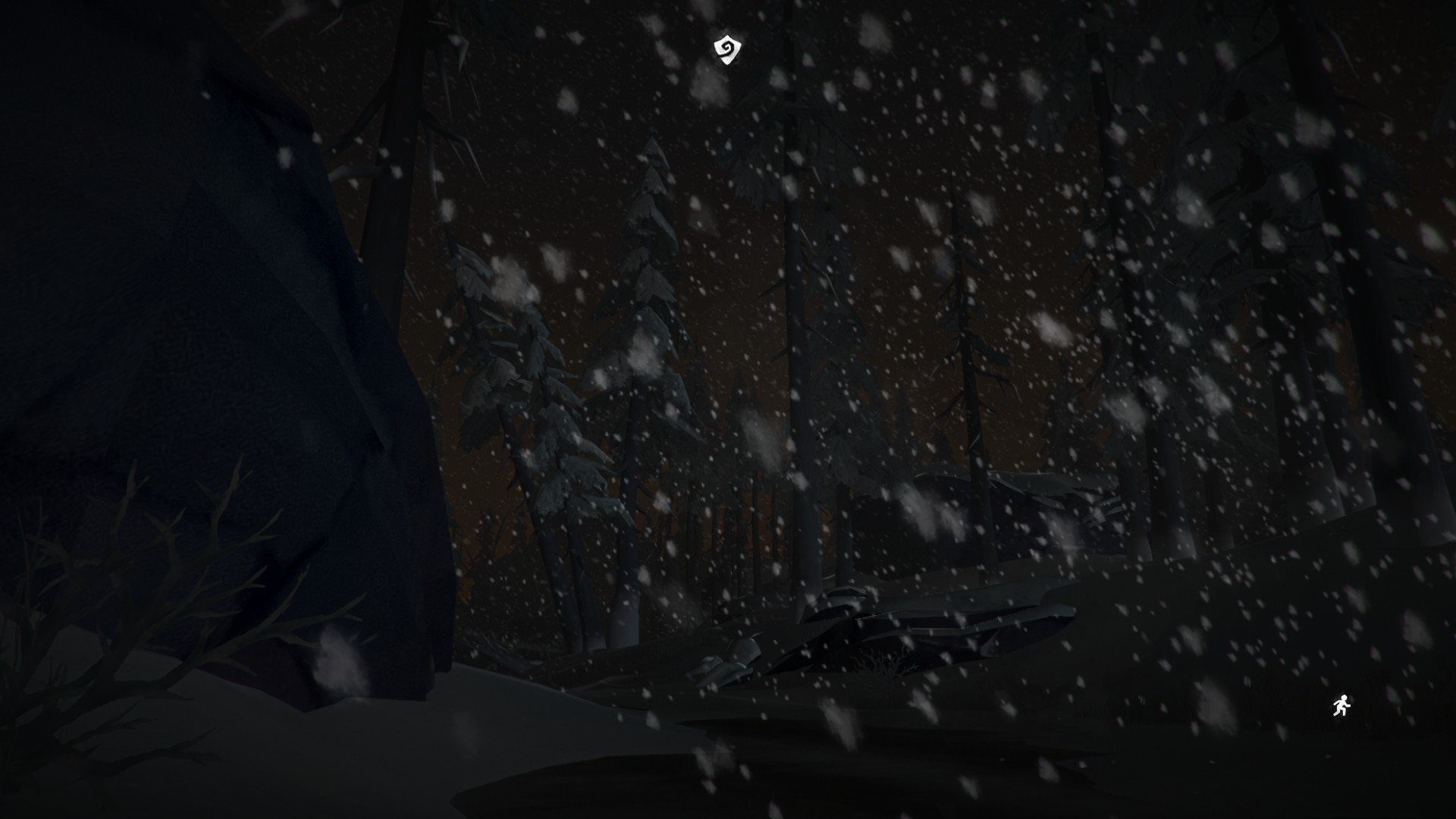 I found the story mode to be far more linear and forced than I’d expected. The story is interesting, but in places the narrative itself is segmented and rather poor. The forced nature of the story places you on rails to a degree, too, which artificially alters the challenges you encounter. I think giving you clues or a map with waypoints and letting you make your own way through the story would have been a better approach.

In my opinion the sandbox mode is where the game really shines. This mode gives you no goals except for your survival. It’s not for the faint of heart, or anyone who needs direction in their games, but the challenge is good and, when you encounter the island’s locations for the first time, at least, there’s a great sense of exploration and accomplishment. The challenges are fun diversions, too, with each one like a mini story mode. 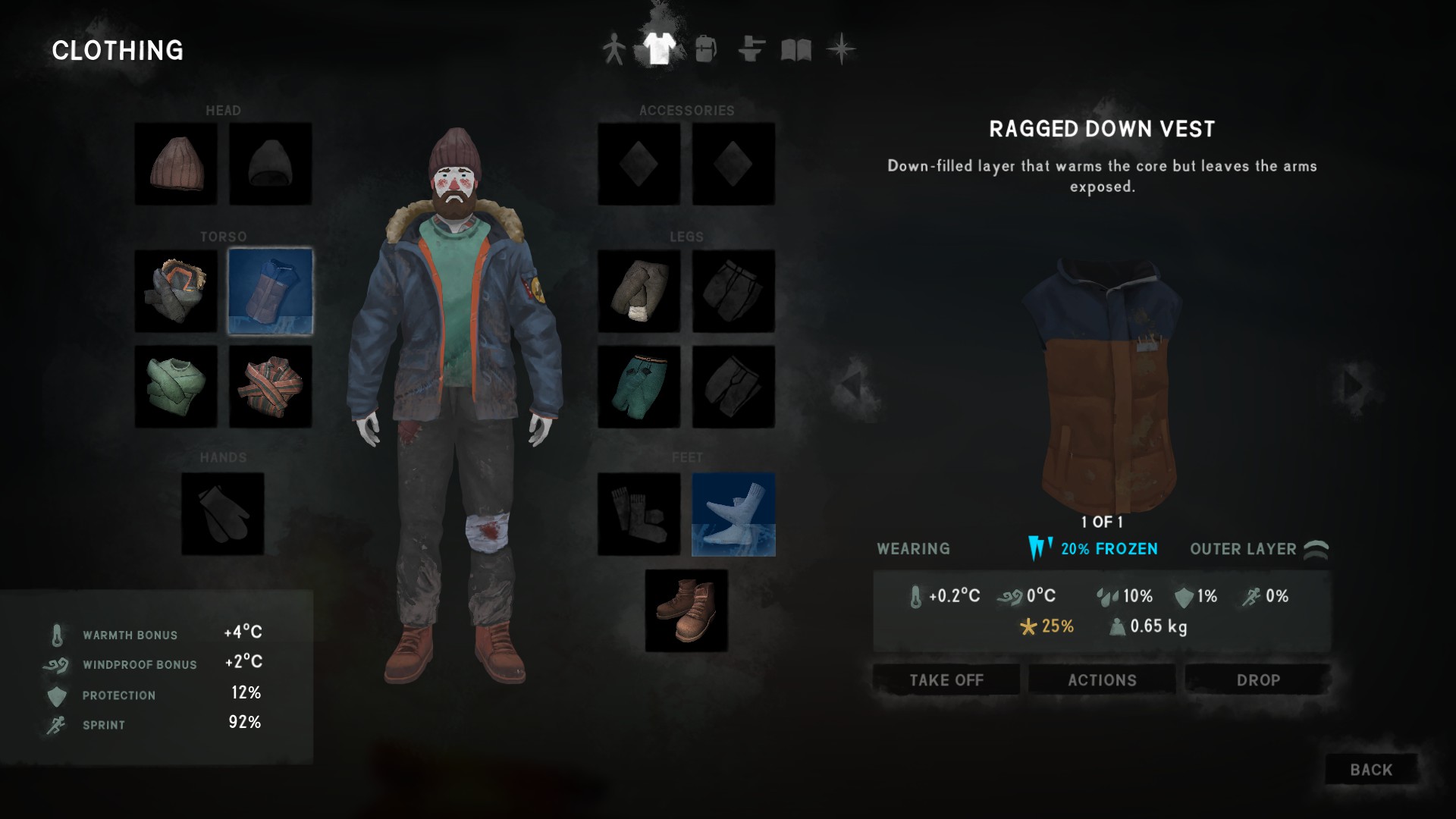 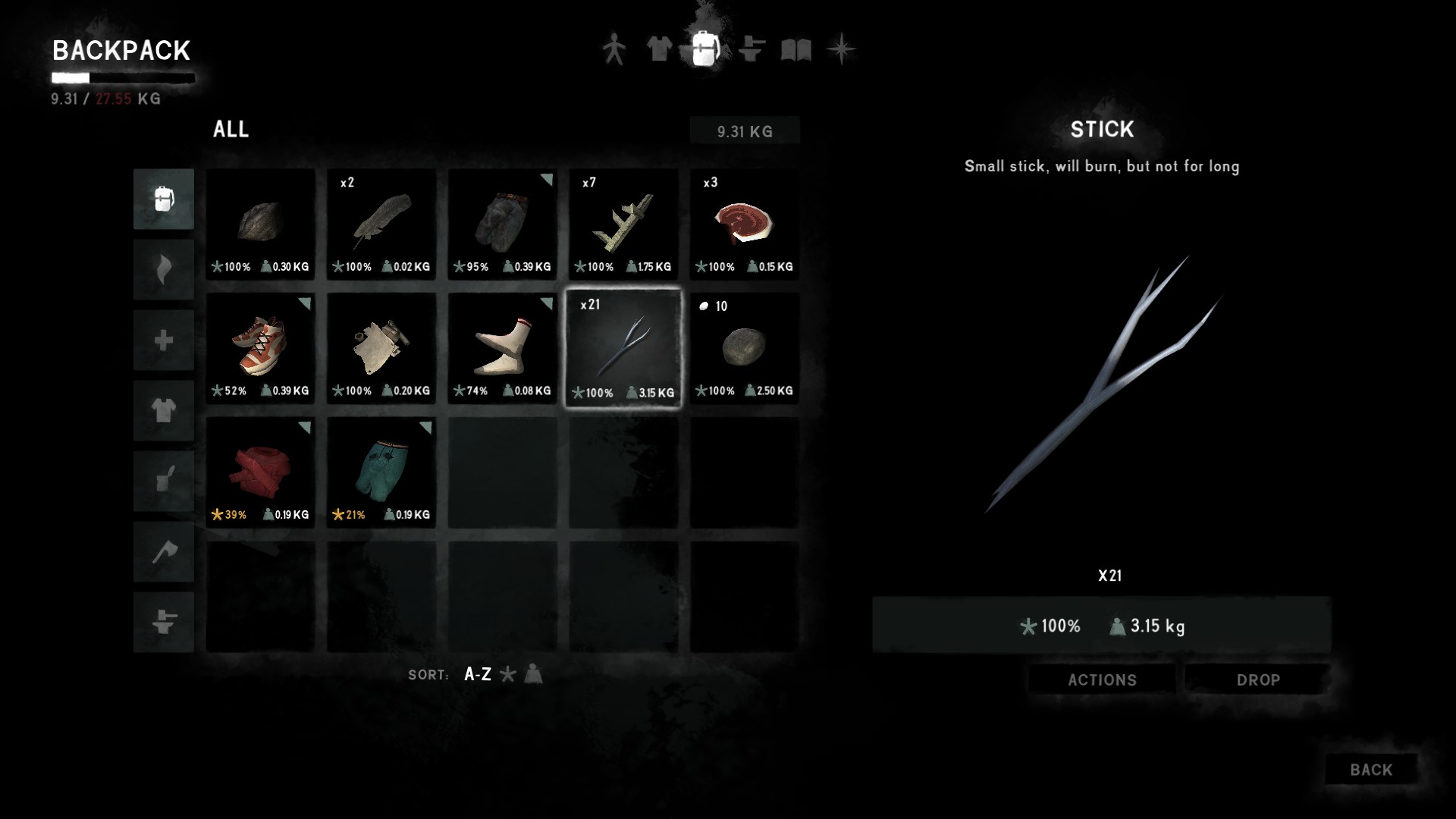 The Long Dark is a magnificent creation. Parts of it seem more like a work of art than a game, and some of its frustrations and idiosyncrasies put me off it a bit. But I’m still enjoying the time I’m spending with it, the story is interesting enough for me to want to find out what happens in the end, and exploring the game world is both challenging and entertaining.

It won’t be everybody’s cup of tea, but if you’re interested in survival-crafting games that are much more survival than crafting, and you don’t mind slow pacing, then you should definitely give it a shot. 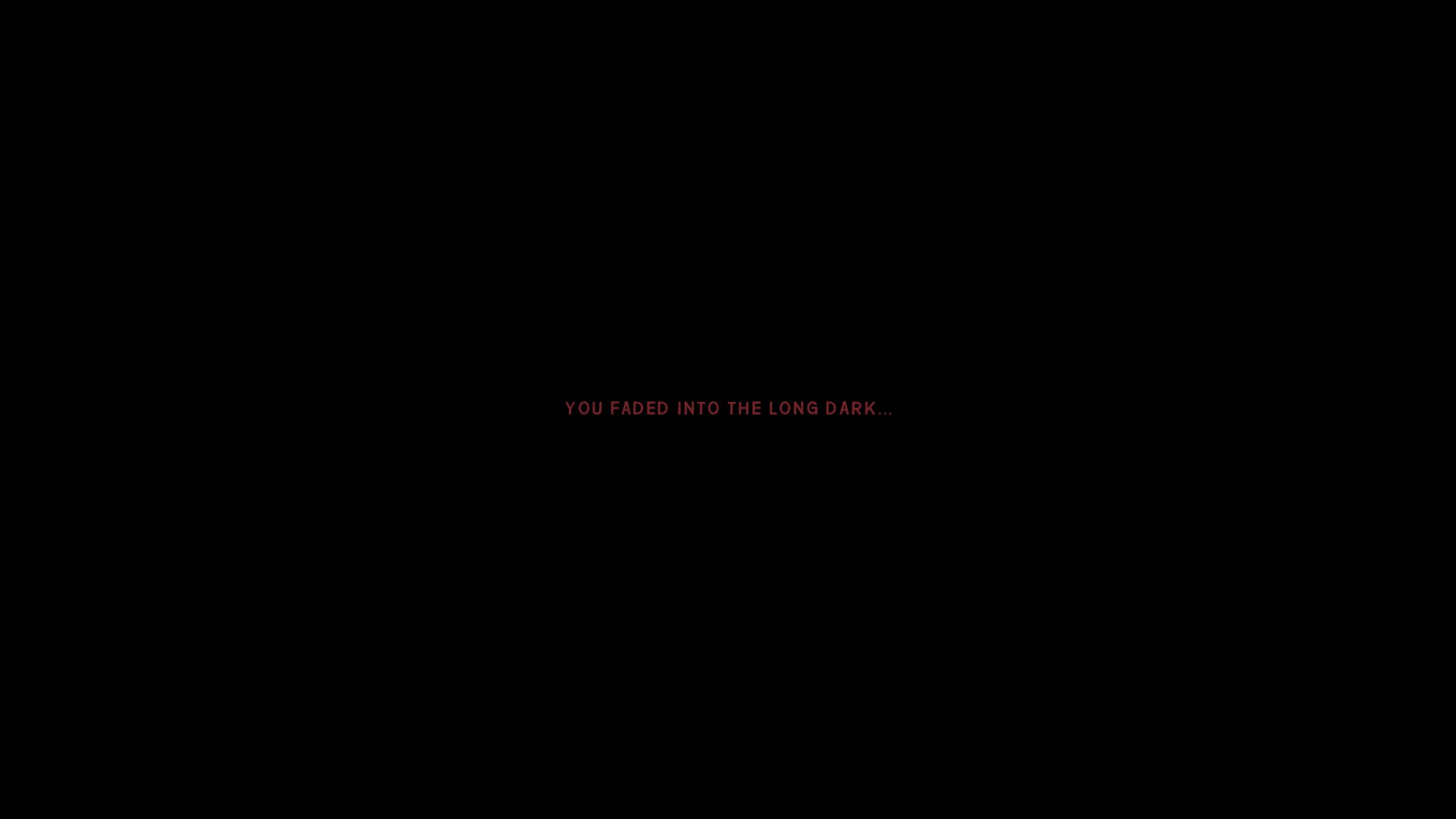