A metroidvania with gun shooting platforms.

The art style of External Visions immediately caught my interest with its huge variety of otherworldly enemies and backgrounds. Robots in rusty lived-in offices and aliens in extra-terrestrial jungles mixed together provide some great escapism. Conversely, the story does not take place in these locations directly but rather in the head of the main character who seems to need escapism in his life even more than we do. 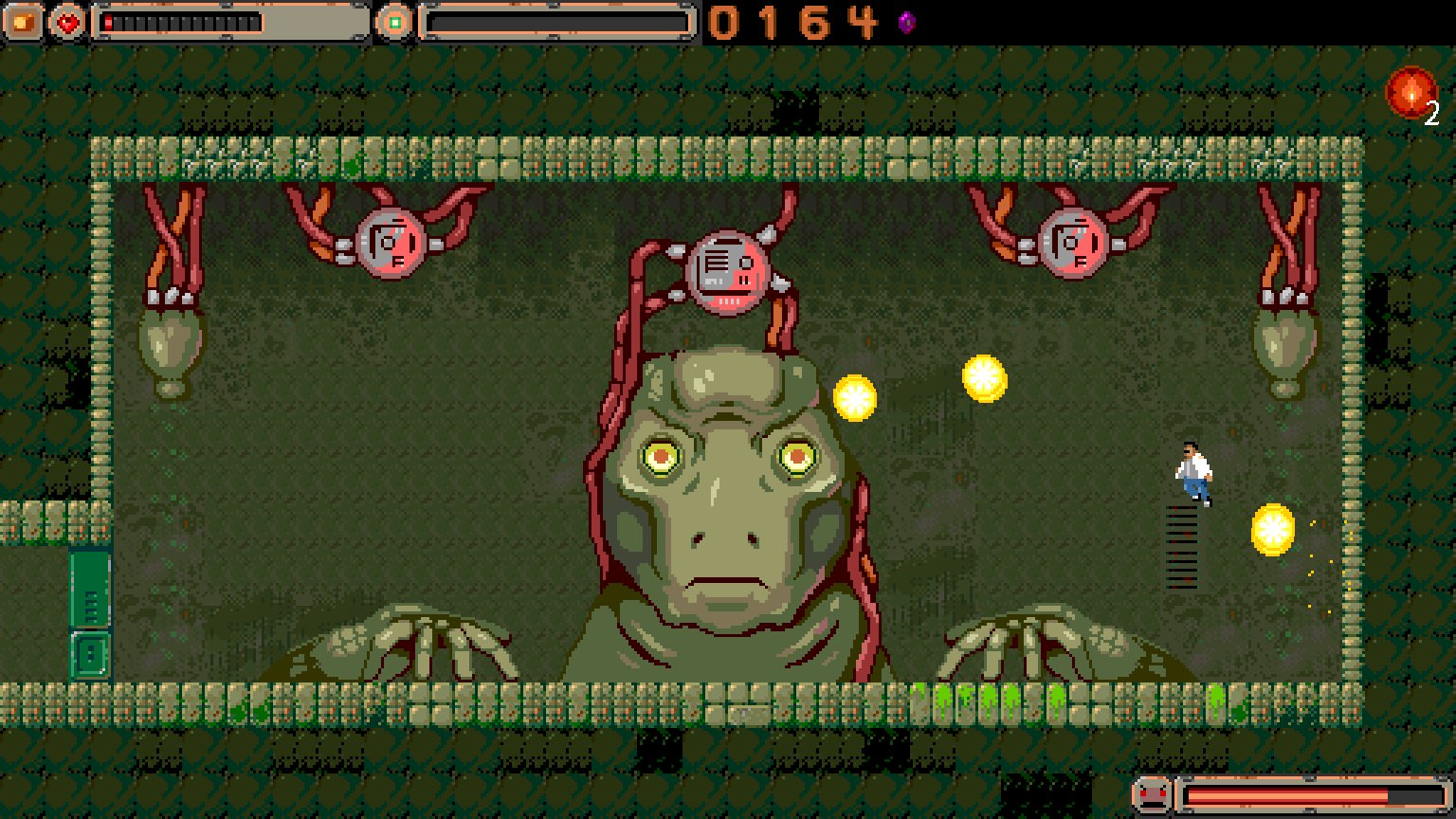 External Visions is a metroidvania. In case you are not familiar with the term, this word usually refers to platformers with a single continuous sprawling map that the players can eventually fully explore back and forth. I have played many great titles this year, such as Hollow Knight, Alwa’s Awakening and Ori and The Blind Forest. The competition is fierce, let’s see how External Visions fares in comparison to all those heavy-weights! 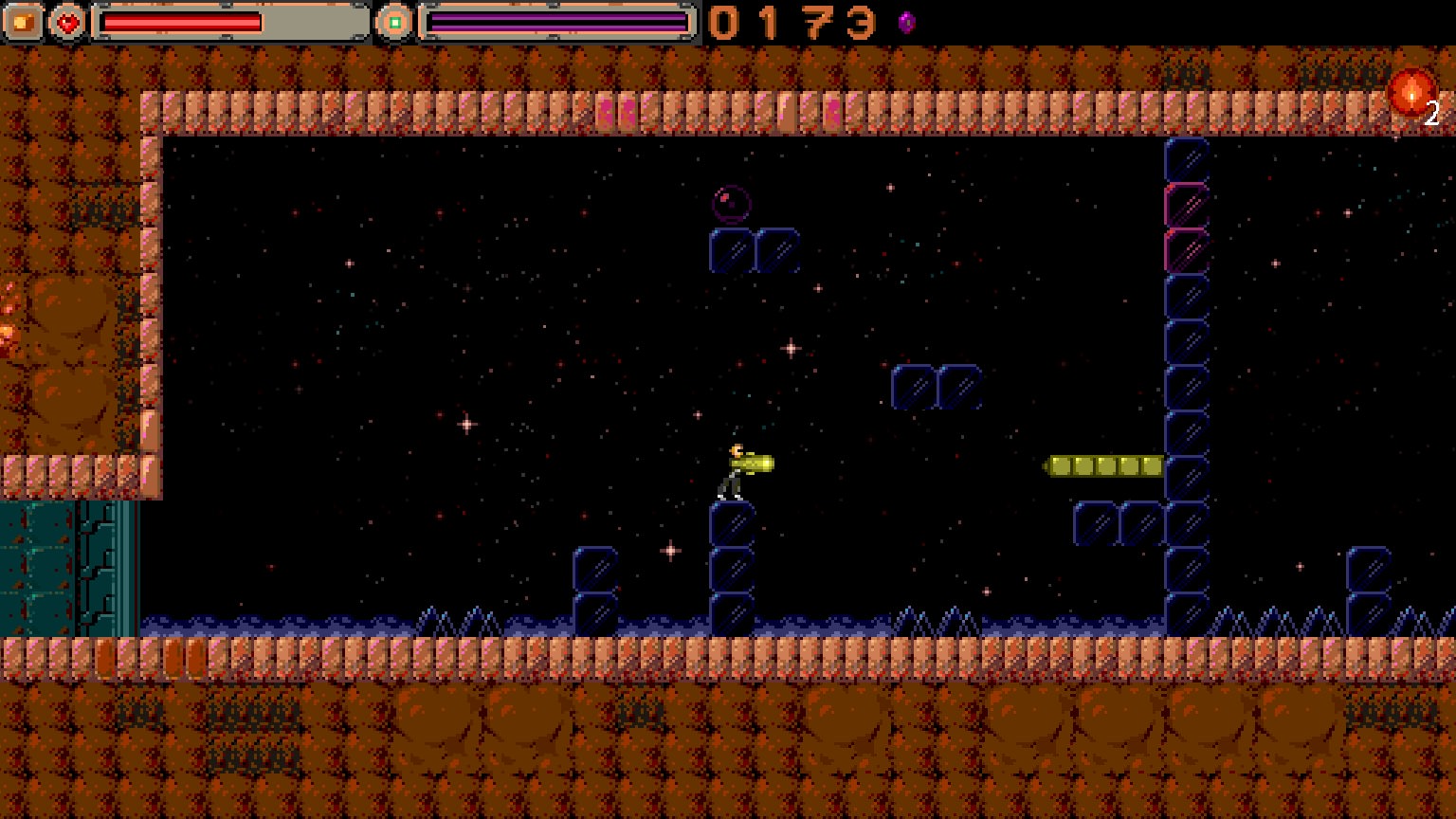 There is a gun that can both hit enemies and shoot platform blocks. This single feature is what I enjoyed most about External Visions since it allows for a lot of nice emergent gameplay and thinking out of the box. There is an element of puzzle solving in this game, translated into several weapon types. For example, another gun allows taking control of some boxes to move them around. These original puzzle elements are really refreshing and set External Visions apart from the mass of indie platformers released on Steam every day, as navigating the rooms feels different than anything else. Except for Alwa’s Awakening of course, which also proposed to create platforms out of thin air albeit not long range like that. However, External Visions is also an action game and not just a puzzle platformer. 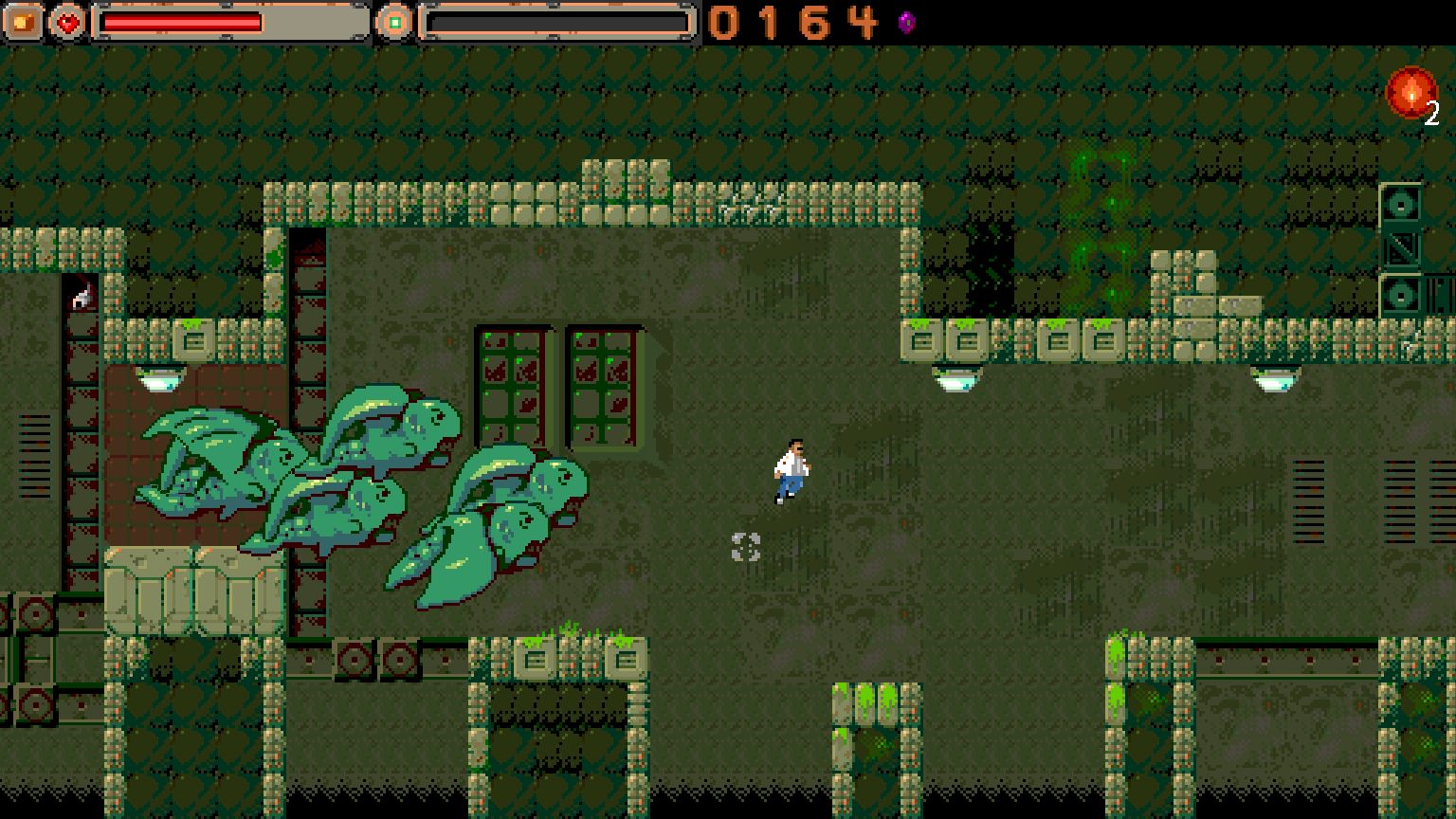 Enemies to shoot come in all shapes and forms, I thoroughly enjoyed their variety both in terms of visual design and game mechanics. They all have different ways to move and to attack. Combat feels very much like old SNES games, while still not being as clunky as back then. In other words, jumping is up to modern standards (and with a double jump) while shooting feels precise, deliberate and limited by horizontal and diagonal aim. Enemies usually have a few healthpoints, meaning that even the smaller ones can be dangerous. Destroyed enemies will not respawn until the player enters another section of the world and then comes back. Unlike SNES games, there are thankfully many save points in External Visions. This part of a metroidvania is usually hard to get right, but I found the placement very good in this game. Thankfully, as this is not a walk in the park. Especially boss fights which are difficult, but also creative. 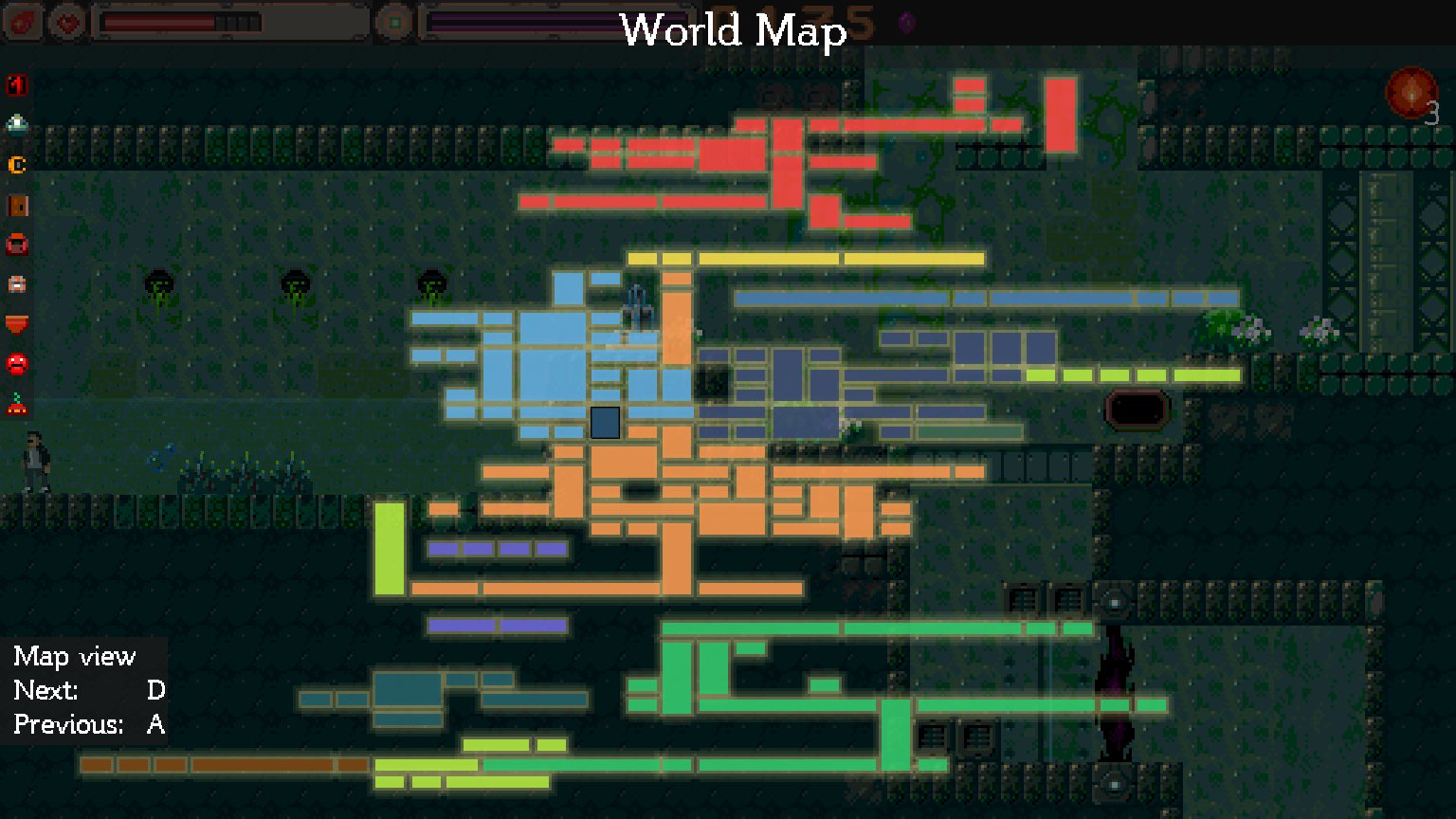 The world of External Visions

Navigation in the map is usually pretty straightforward in metroidvanias, except in Hollow Knight because of course Hollow Knight thinks that keeping the player in the dark is an immersive and rewarding experience. External Visions has a pretty good map, showing the precise layout of the rooms while conveying information on the items they contain. My main gripe is more towards level design, as I felt that a lot of room sections were a bit dull and uninteresting. I was also sometimes a bit confused as to where I was supposed to go since some doors can only be opened when the player character has gone through some sort of stress release in specific locations and a fresh change of clothes. The thing is, blocky tiles forming the layout of the levels are not very visually pleasing, which does not make the exploration of new rooms especially motivating (Alwa’s Awakening got away with it by making each room its own unique puzzle, as well as assembling rooms in a coherent ensemble). 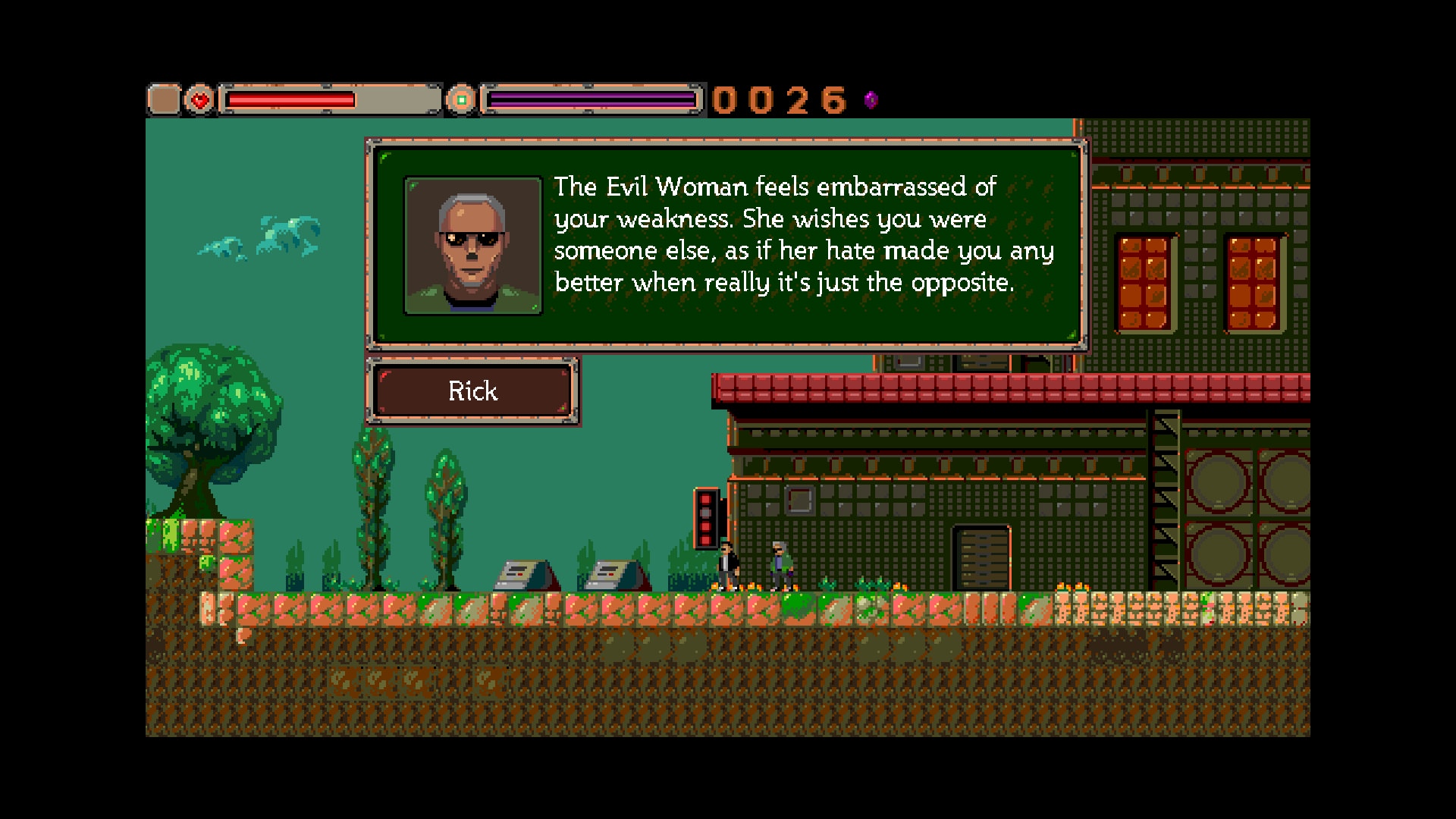 Technically, the game runs fine – that is, if you can make it run. If you can’t launch it, activate the beta branch on Steam. Otherwise, framerate is good, all types of controllers are recognized and it is even possible to rebind everything. The music was not particularly inspiring. 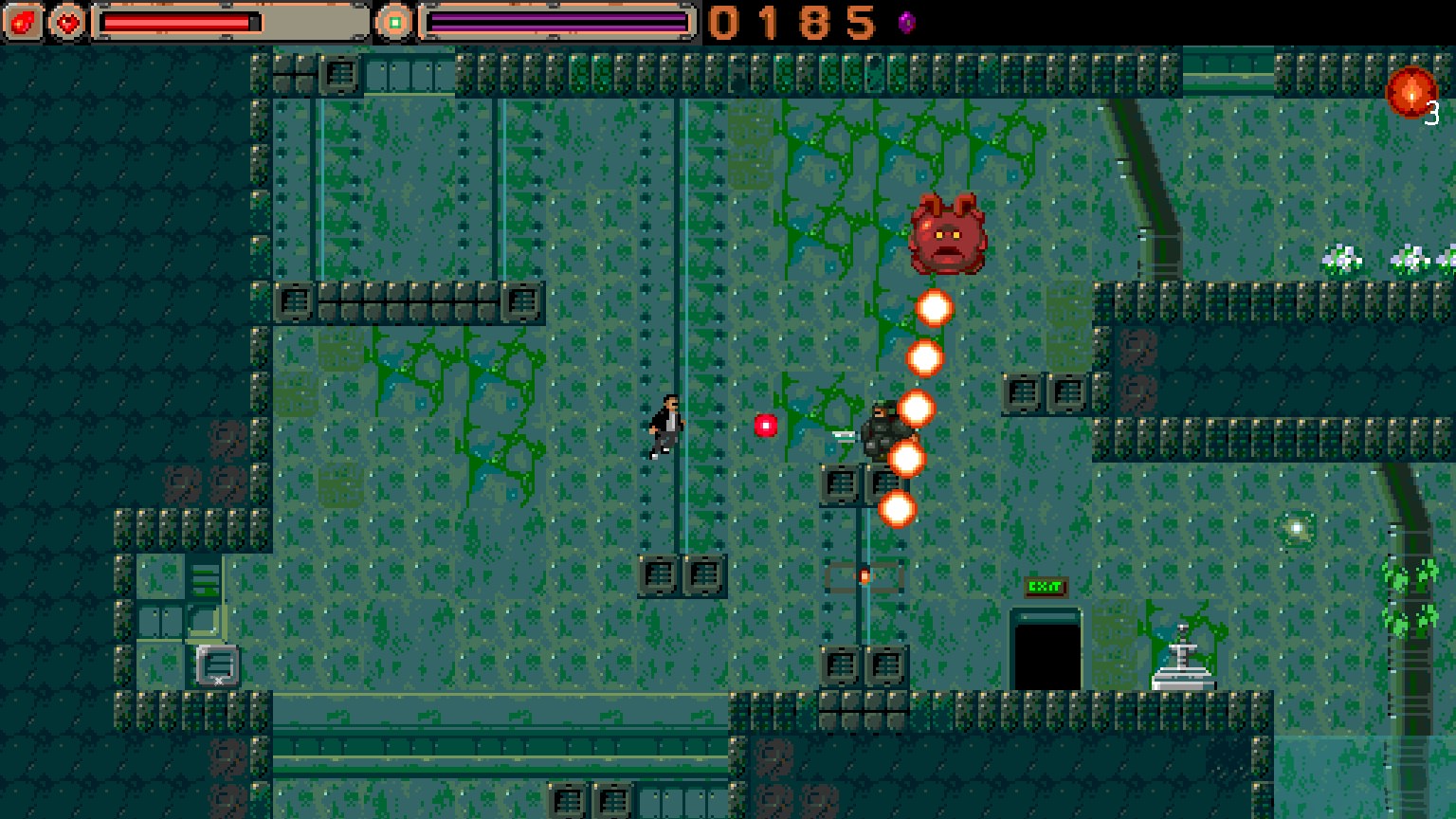 External Visions did not blow my mind, but it is still a better experience than most of what is out there. The gun shooting platforms blocks add a welcome layer of puzzling to the action along with a diverse number of backgrounds and enemies. I just felt that the SNES-like style did not really work here for me, and the level design was hit or miss. All the metroidvanias I have cited are specialized in a domain (action, platforming, puzzles) and External Visions seemed to me like the most balanced of them all. However, just like Hollow Knight, I do not feel compelled to see the game to the end.