AereA is a game which does many things right, except for the actual gameplay.  It’s rather disappointing since so much care was put into the rest of the game.

AereA, a game from Triangle Studios and published by SODESCO, is a top-down “action RPG” and I use that term loosely.  According to the game info, it’s musically themed and while I was playing I definitely saw the incorporation of musical instruments and rhythm into the art style.  However, I was expecting a musical Diablo style game with perhaps some cool musical puzzles or combat, yet none of that occurred.  The only things musical were the sound effects, weapons to some extent, the shape of the bosses, and a few animations.  You begin by choosing a character from a variety of young students, each with a different type of musical weapon. You are a musician attending a music school in a world split into islands from a battle between the head Maestro and his arch enemy Demetrio.  The character you play as becomes an important part of the story as you unravel a bit of mystery as to why some sacred instruments have been stolen.  I won’t go into it any further to prevent possible spoilers. 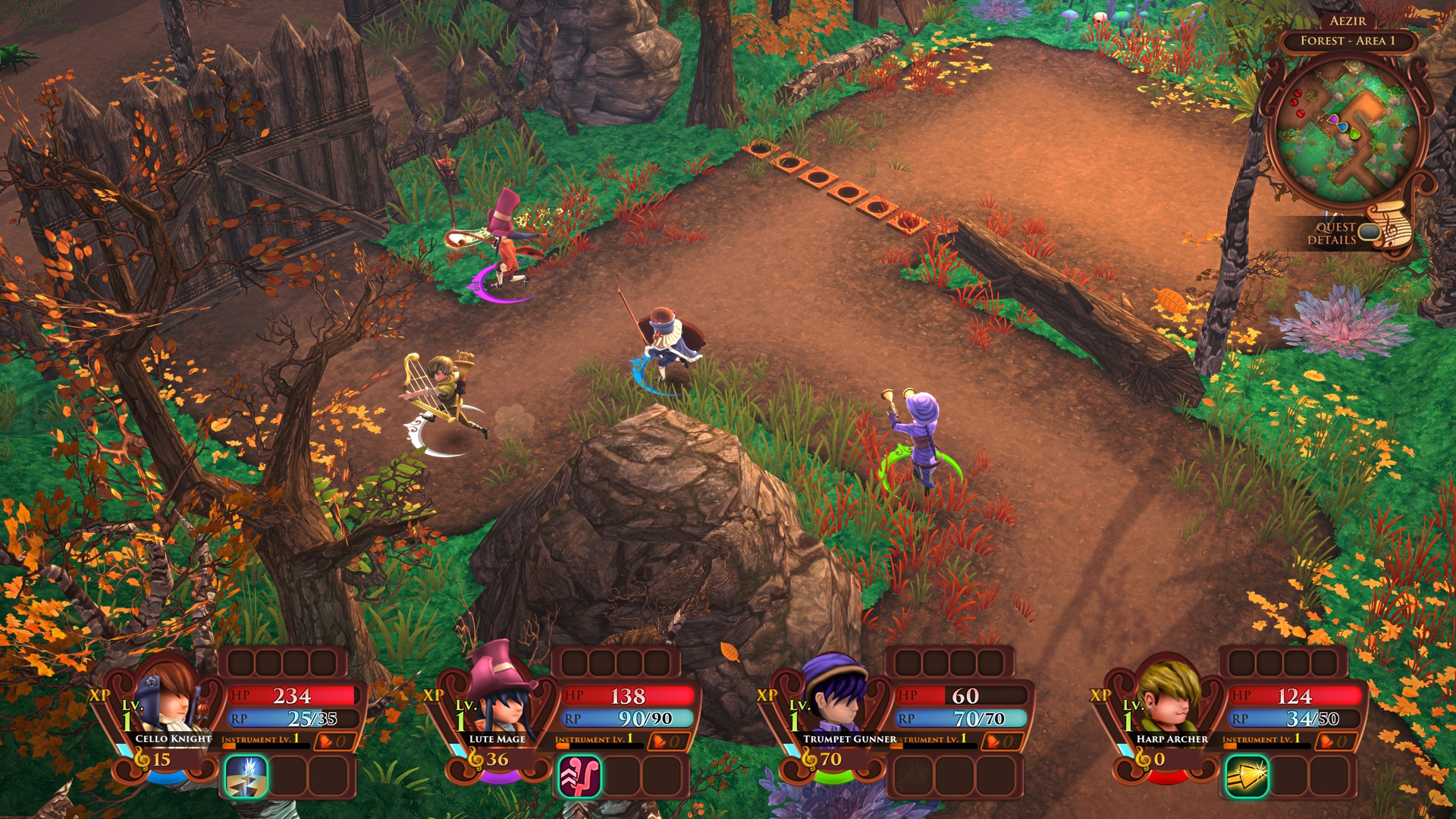 The artwork, without a doubt, shines through here with wonderfully crafted top-down graphics that, to my eyes,  seem like a shining example of how the Unity engine can be used well.  There is care to the presentation, transitions, room maneuvers, action animations, and the like.  It’s all done superbly.  Keep in mind, there is no zooming in here to see all the details, but from up high and looking down on the action it is presented better than some games do.

There will be battles with musical boss beasts, locks to be opened with animated switches that resemble metronomes, and musical loot shaped like music notes which can be taken after smashing pots and the like.  Graphicwise, it looks beautiful and renders in 4K just fine as noted on the steam page.

On top of this is one of the nicest game soundtracks I’ve heard in awhile, all classically themed and impressively composed for a game set in a musical world.  It sounds like a full orchestra is at work here and every area becomes a showcase for the music more than anything.  I found out it was composed by the same person who did the Broforce soundtrack, Deon van Heerden.  It shows, as the music in this game is by far the best aspect.

Your movements are rather limited by the area in which you can travel to or walk around, but the environments were all put together with a reasonable amount of care, paying attention to where players will be, will react, and will move towards. If you walk down a hallway, the upcoming room is displayed without hindering the movement.  If you walk into a room without knowing what is ahead, you’ll see the rocks or walls become transparent to reveal monsters lying in wait.  It was smooth and enjoyable. 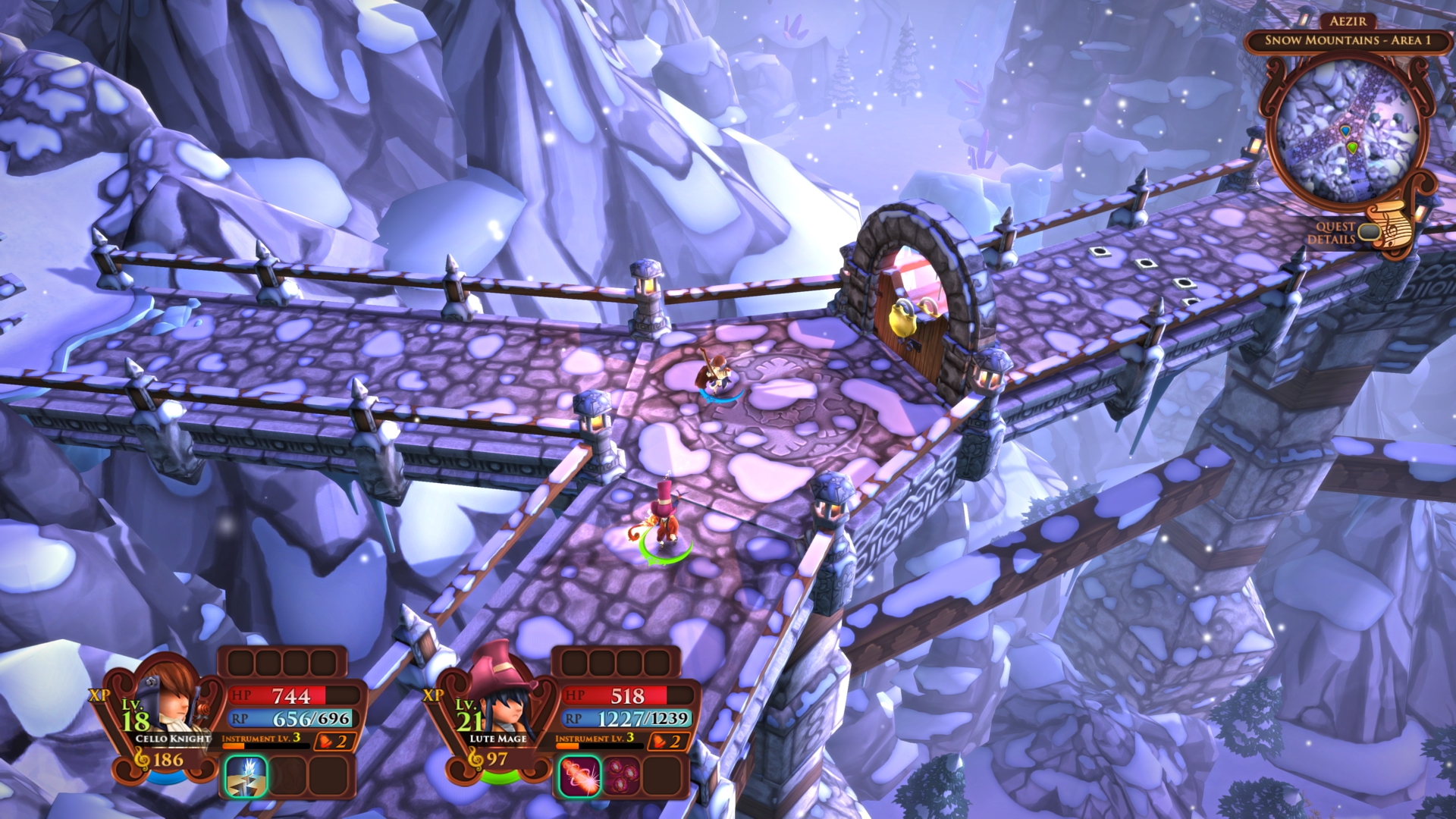 So, why the poor rating?  Unfortunately, the actual gameplay is so easy that it’s almost impossible to die in this game.  Perhaps the studio is aiming for a casual gamer audience or a stress-free gaming experience.  Whatever the reason, what comes through the gameplay is a monotonous series of fetch quests and “kill the boss monster” quests which take much longer to get to than it takes to complete once you begin to attack.  There are no nuances, no puzzles save for the occasional floating box that needs to be put in a hole, and no real dynamics for battle despite having a rhythm/magic point system in place.

Early on I assumed it would get harder, but in reality the game just continued with fetch quest after fetch quest, ending with another boss fight that took all of 30 seconds once I discovered the boss level.  The majority of the game is wandering around a bit lost and trying to find the next portal to the quest at hand.  Every regular enemy died after one hit until I got to the lava levels, where I finally had a chance to use my special attack because it took maybe three or four regular hits to kill those lava-men monsters. With just one special attack, all the enemies were killed in a single mighty instrument blast.  Oddly, the lava men make a weird braying sound like a donkey when they die.  Still, it was the only enemy I enjoyed killing.   The monsters mostly just stand there and get hit, with only a few levels where they made the attempt to gang up on me all at once. This goes on until the second to last boss where I almost died, yet beat it on the first attempt.  I was so happy to get a boss that was at least mildly interesting, but quickly disappointed as I beat it too quickly.  The last boss fight was the only one where I died once, and that was mostly trying to figure out how the columns and parrying worked.  The rest of the bosses look interesting at first, but they don’t vary much and honestly never put up a challenge.

There are a handful of environmental hazards to dodge as well, but by “dodge” I mean walk around at a medium pace or wait for a bit while a spike comes out of the ground.   The landmines were the only sneaky parts as I could not always see them when surrounded by monsters.

Also, the ending of the game almost felt like it wasn’t the end. I searched around some more, even checked on YouTube in case I missed something, but to my surprise, the ending just ends with a short bit of dialogue.  It is not really bad per se, but the ending makes you wonder if there was supposed to be more when there actually isn’t.

In all, the game fails on the fact that the difficulty is dialed down so low that I can’t see how many people would enjoy this game unless they are specifically looking for a game where they cannot die and the combat is repetitive and rather simple. 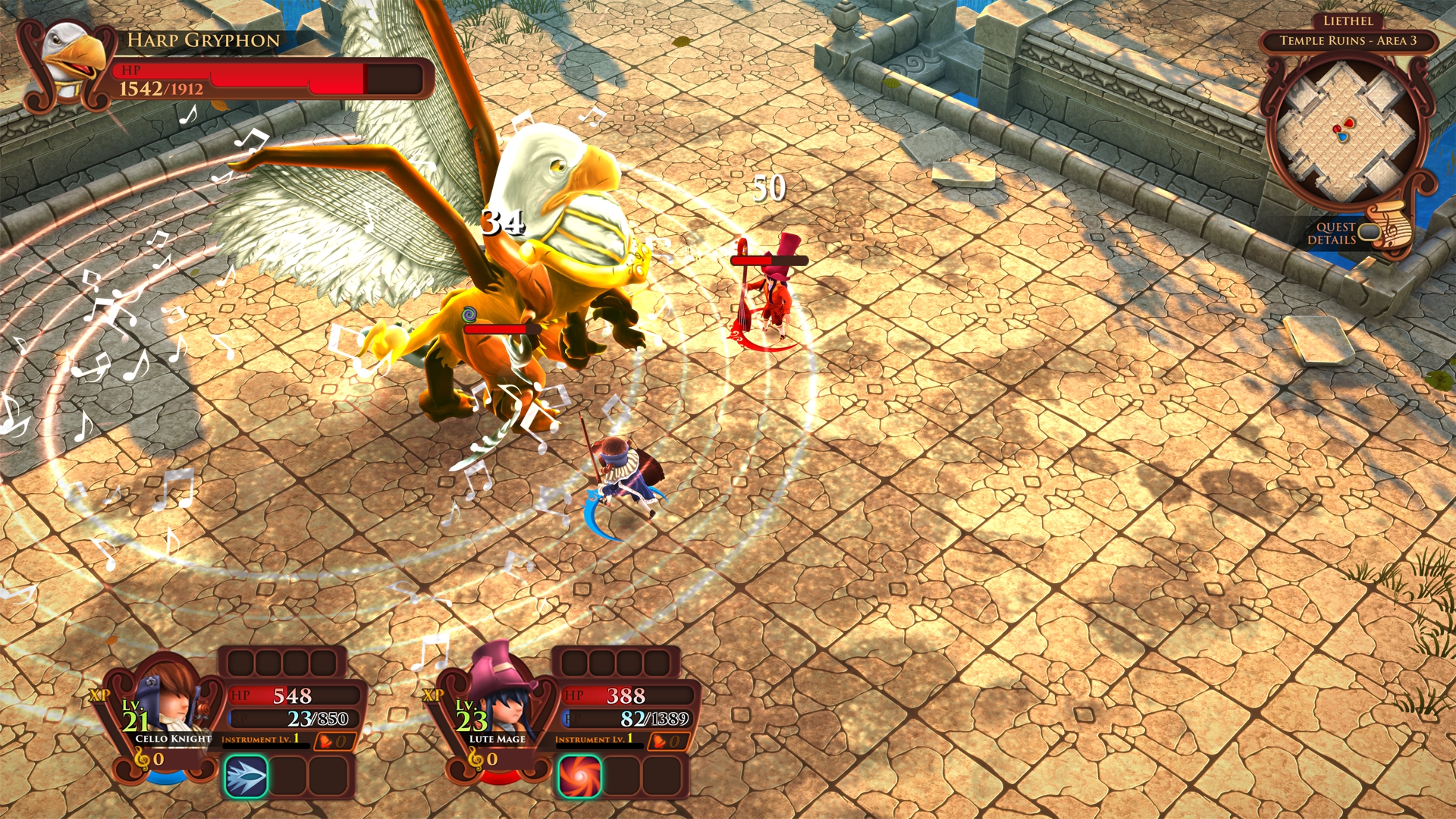 There are power-ups, unlockable ones even, but they do little good except for health because I never came across a monster I could not beat in one hit.  I think I used the poison one once during the second to last boss fight, but I’m not sure it did anything because I was better off just poking at the boss until it died.

There are also rhythm points to accrue and use in special attacks as magic points.  Again, I only used these on groups of lava men and a few times on the end boss.   I just kept getting more and more rhythm points without using them hardly at all.

Within the main Concert Hall, there is a shop where you can upgrade skills, weapons, and purchase power-ups.  I used them, but towards the end I began to think that perhaps I should have left my upgrades alone to make the game harder.  The options are nice, but the power-ups are only explained in the shop so I generally have no idea what they do once I’m in battle.  Mostly, I just clicked them all and only memorized the health jars. 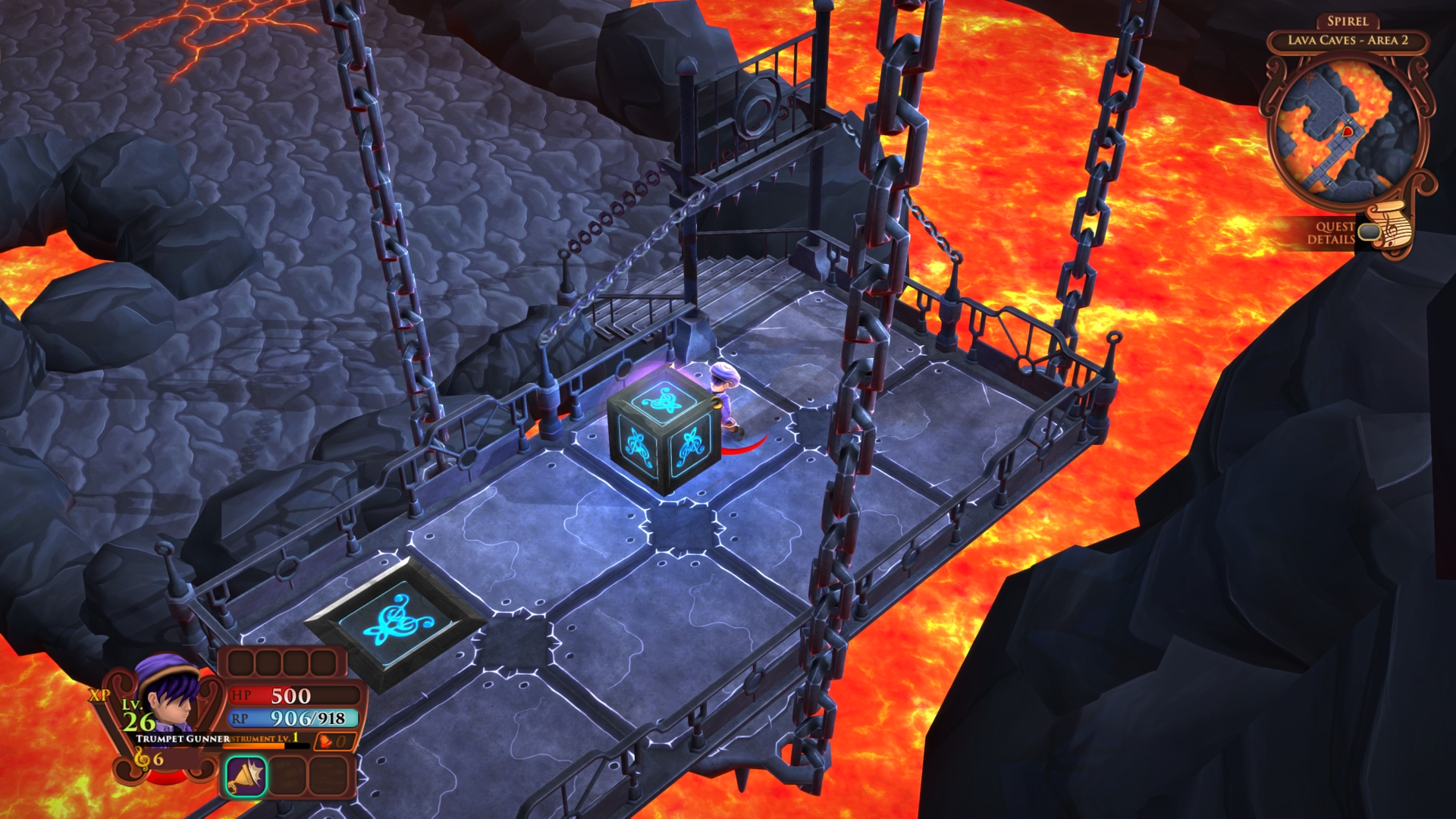 The storyline is somewhat interesting yet uninvolved with the characters in the game. There were grammar errors within the text here and there.  I found the scenes with the janitor to be the most interesting as he tells about the history of AereA.  What I didn’t really enjoy was that the story repeatedly used a young girl getting sick for fetching this and that.  The main antagonist does not show up until the end other than a few scenes where he talks from behind a chair.  The story is adequate, but that is pretty much it.  While there is the opportunity to make the game more tolerable with some character banter, it’s not done much and I never get a sense of caring about anyone within the game.

I only once got stuck in geometry once, and that was during a boss fight, I believe it was the second or third one.  The boss was not hard, and I defeated it quickly, yet I moved too close to some rocks and got stuck there, followed by immediately falling through into the game floor a bit while the sacred musical instrument glimmered beyond my grasp to grab it and finish the level.  I had to replay that boss, but it was a moderate inconvenience.  I would have been more upset if it had happened with a difficult boss.  Other than that, no game crashes or errors.

I don’t enjoy giving a bad rating to a game, but I cannot recommend this title.  Perhaps purchase the soundtrack, but the game itself is simply too easy to play and fairly tedious.  Even my kids, who are elementary school age, were bored with this game and refused to watch me play after a few minutes.   There was quite a lot of potential here to make something more interesting, but it falls short of pretty much everything I had imagined when I saw the game trailer.  I can only suggest this game if you want a completely stress-free game where you go on fetch quests for hours on end with no decent payoff at the end.