Azulgar: Star Commanders is an indie space combat simulator that’s trying to be much more. Does it succeed? Not yet, I’m sorry to say.

Azulgar puts you in control of an unnamed and unseen space pilot at the controls of one of three spaceships of varying size. According to the backstory (not in game yet), the game has you exploring a large universe, beginning in the Sol System and traveling to who knows where. At the moment, though, you only have access to one rather small asteroid belt, inhabited by nobody except a few pirates.

Graphics are the highlight of the game, with very nice ship models made up of a number of modular components, which can be destroyed individually. The environment, too, looks lovely, with a large planet (moon?) nearby and interesting formations of asteroids, together with stations (rather simple-looking up close) and an array of man-made space junk. Weapon effects are very good, too. 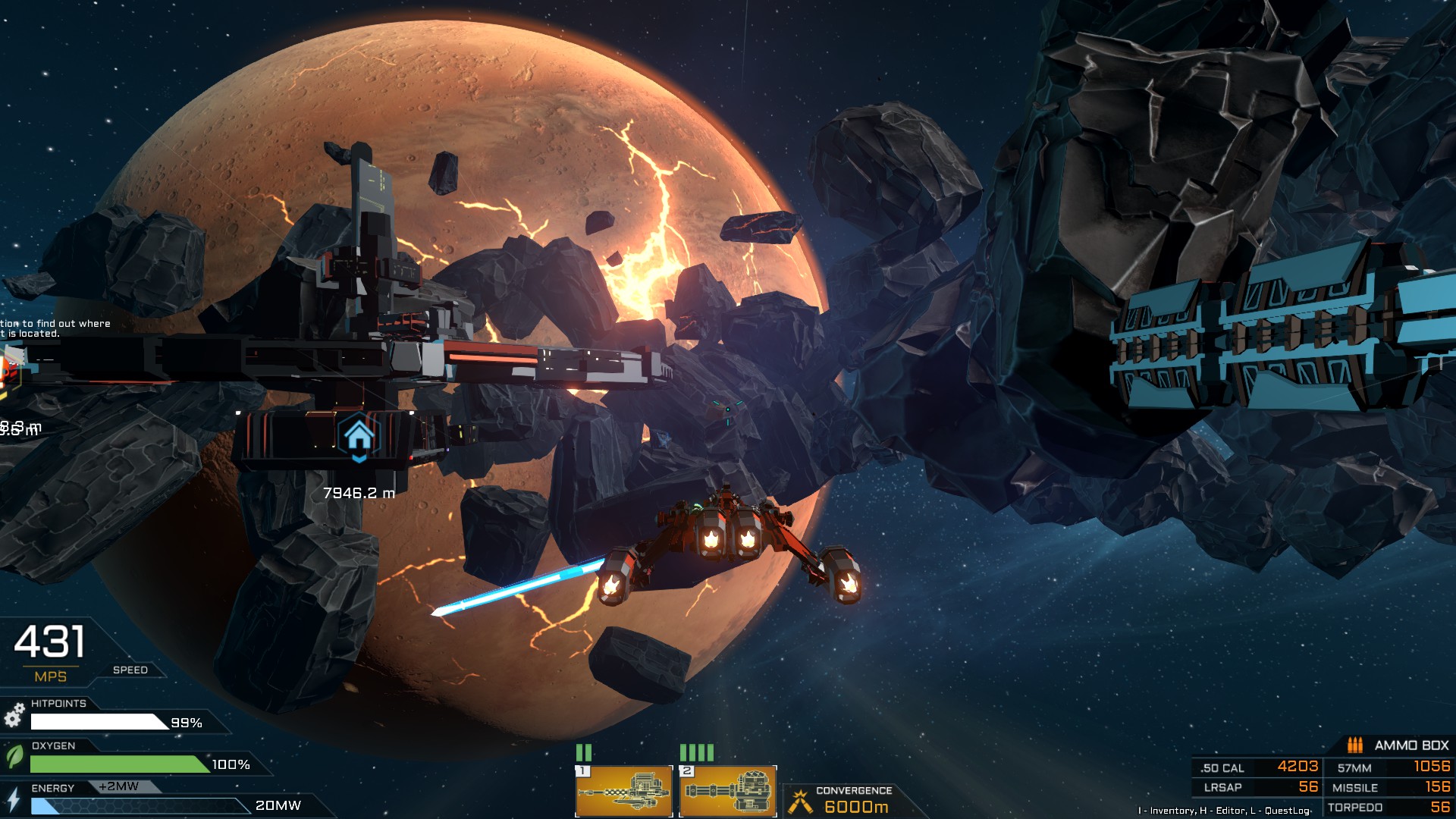 A few things let down the experience, though. UI overlays can be confusing, with in-game text seen through the UI often obscuring what you’re trying to read. Multiple UI layers can be active at once, too, making it even worse. The asteroid ‘hook’ looks ridiculous: an untextured bungee cord. The ships look really bad when climbing or descending, too, as they rotate without any rotational thrust or inertia; just try positioning the camera side-on and descending or ascending rapidly — it’s laughable. I also noticed textures flickering after playing for a while, but I couldn’t identify what caused it.

There are a few options: a detail level setting, resolution, and full screen / windowed modes, plus toggles for ambient occlusion and bloom. Performance is good, but the game pauses for a moment whenever enemies are spawning. 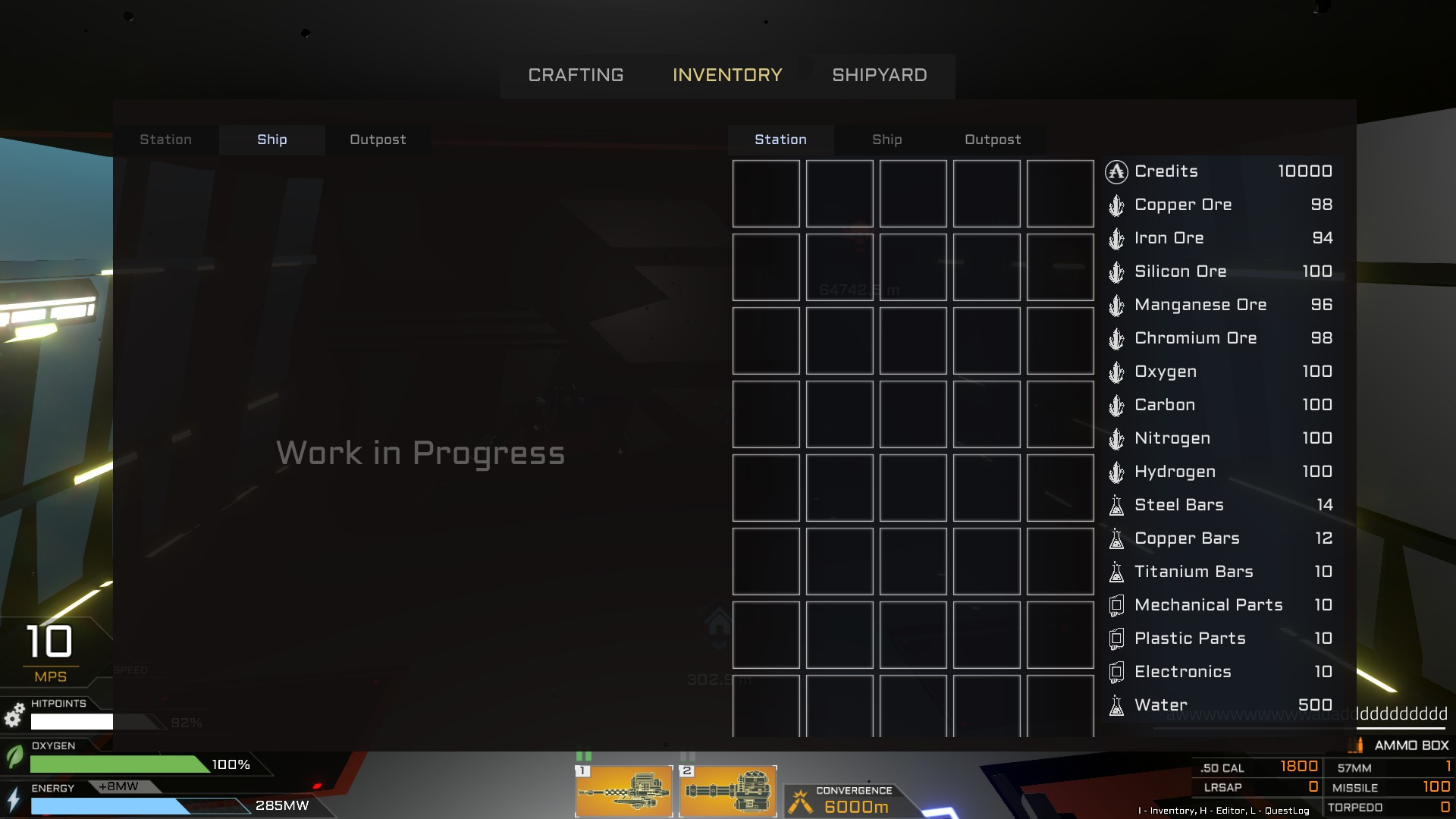 Music is limited, with a thumping electronic rock title music track that I found rather catchy, and in-game music that’s more like ambient noise than real music and is way too soft.

Sound effects are okay, but I wonder how sound travels in space so well. There also seem to be some normalization issues: the afterburner is quite loud, guns and explosions are stupidly loud, and normal engines and music can only be heard if you turn the volume right up.

The store page makes some grand promises: a cooperative multiplayer “Sandbox Roleplaying game with Strategic elements that puts you in command of a spaceship, space station, and a fleet in a massive sandbox universe” (sic). Let me say now that very little of that, or much of the other hyperbole, is actually true, at least not yet anyway.

Instead, what you get so far is a very short, mostly nonsensical single-player campaign that involves flying around an asteroid belt in your choice of fighter, gunship, or corvette. The asteroid belt is uninhabited by other ships most of the time, apart from when you fly too close to a quest or pirate zone trigger, in which case a couple of over-eager pirate fighters spawn a few kilometers away and try to kill you with unlimited ammunition. 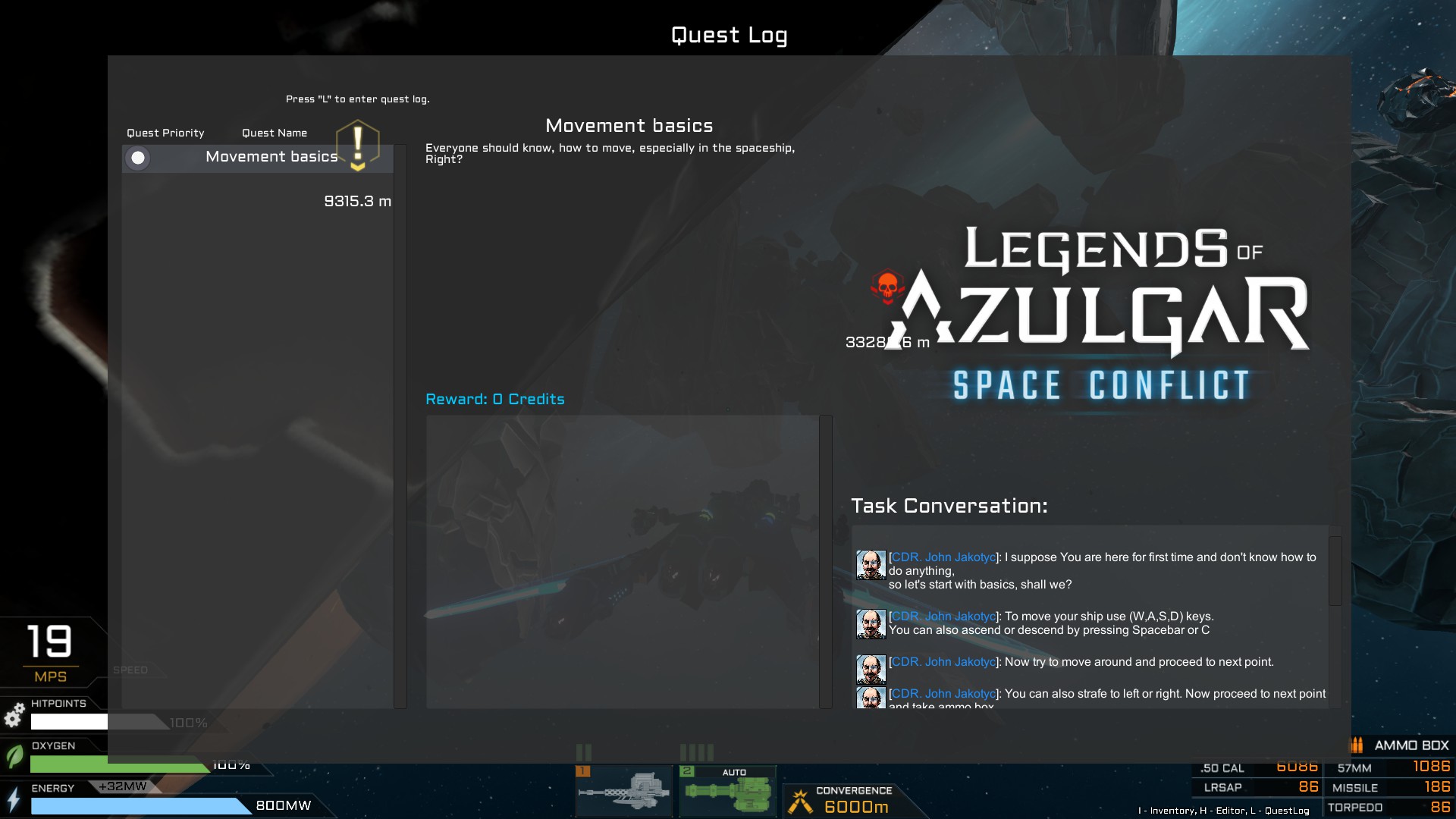 After selecting ‘singleplayer’ from the main menu — the multiplayer campaign is not yet available and deathmatch is only good for trying out ship designs — you’ll have to go through some unskippable tutorial missions, and then you can start on the campaign itself. In spite of the quality of the writing I was interested to see where this would lead, then disappointed to see that it led nowhere. The prologue mission — half a dozen or so sub-missions that you have to redo if you quit — is the whole game at the moment. The touted “massive sandbox universe” is one asteroid field. Hmmm.

Crafting and survival elements are extremely limited, too. You can ‘hook’ asteroids of certain types and drag them around with you, dramatically reducing your top speed. (Hang on! Top speed? In space? Yes, that’s right. It’s weird enough that you hit a top speed of around 500 meters per second in the near vacuum of space in any case, but why can you only fly under 20% of that when you’re towing an asteroid? *sigh*) This makes resource gathering painfully slow. Even more frustrating is the chance that the asteroid won’t be detected by the station when you drop it off, or will not increase station resources, making all your efforts wasted. 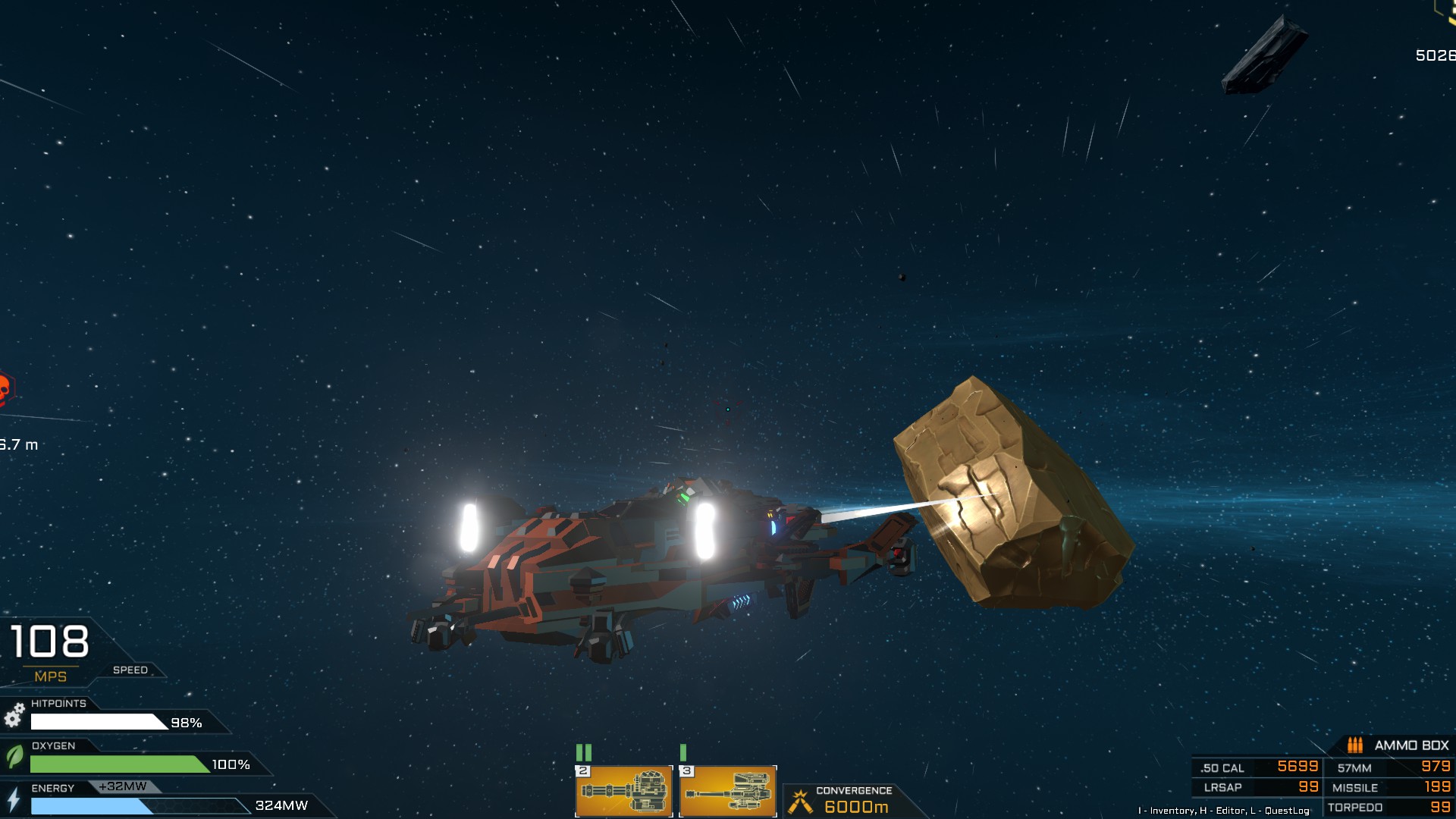 Let’s say you do get an asteroid to the station’s hold and you do get some resources. What then? Well, there’s a small array of ship parts that you can craft from other more basic resources, and then there’s an extremely fiddly shipbuilder that you can use to customise your ship. This is ostensibly similar to the rocket designer in Kerbal Space Program, but in practice it’s nowhere near as easy to use. After playing KSP again a couple of nights ago and breezing through another rocket construction, when I fired up Azulgar to try to build a new ship I almost smashed my laptop in frustration. 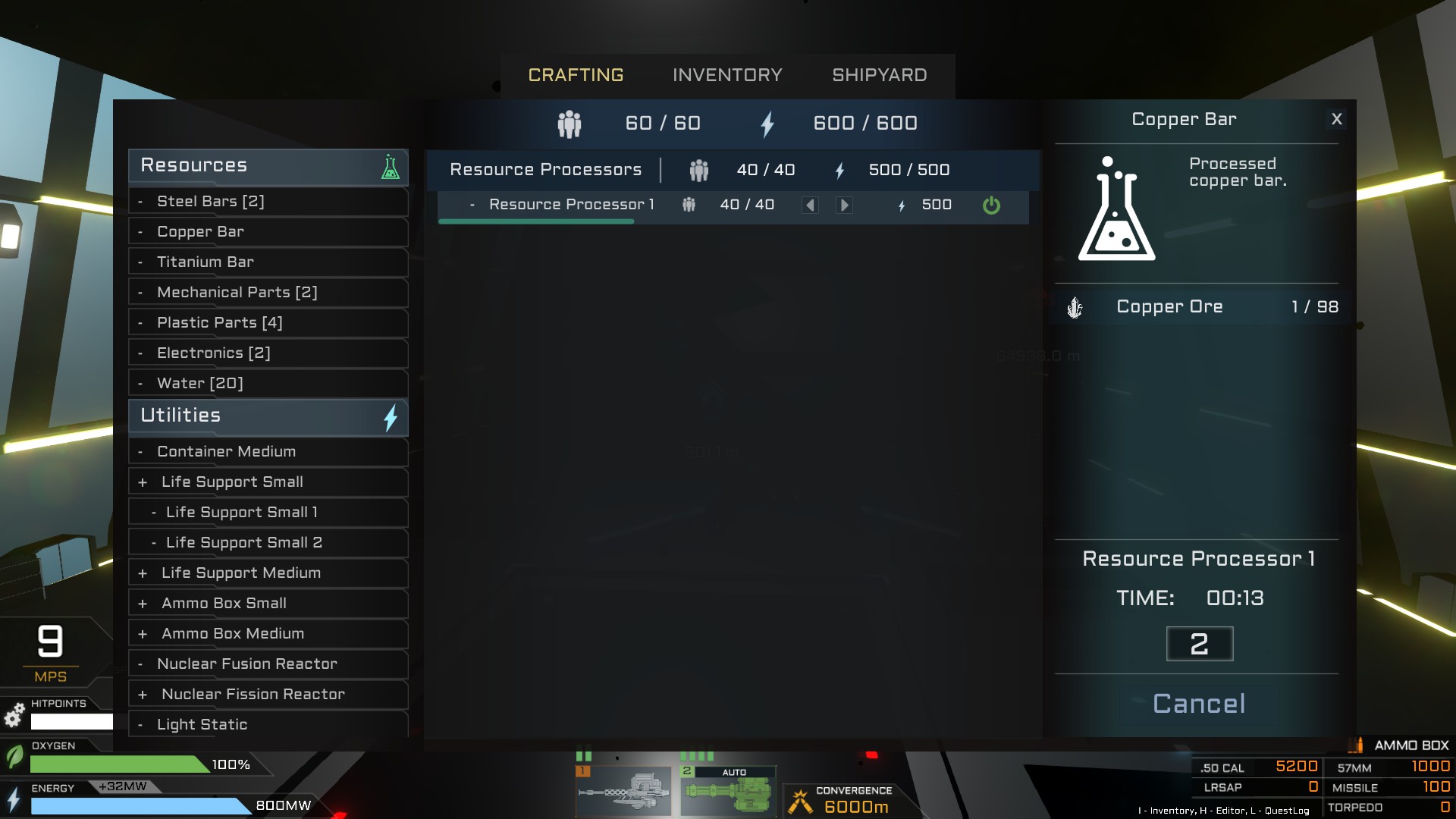 In any case, you can’t earn any more credits beyond the starting amount, even if you pick some up while flying around. In fact, of the “lootboxes” you can pick up from the environment — ammunition, credits, cyberslot, and blueprint — only ammunition lootboxes actually seem to do anything at all.

Controls are very weird, too. Rather than copying basically every other flight simulator in existence, Legends of Azulgar uses WASD and space or C to ascend or descend. It’s hard to get used to, gives you hand cramp when you try to do anything with your afterburner, and doesn’t have any controller support.

There are many more issues than already mentioned, too: numerous mission scripting issues, poor collision detection, respawning inside asteroids, interface issues, unskinned Unity UI dialogs, no way to adjust settings from in-game, no in-game pause, hit points that don’t make any sense (they’re either > 90% or you’re dead), and awful writing quality. I sort of expect this sort of stuff from Early Access games, though, so I don’t really hold most of that against this one. 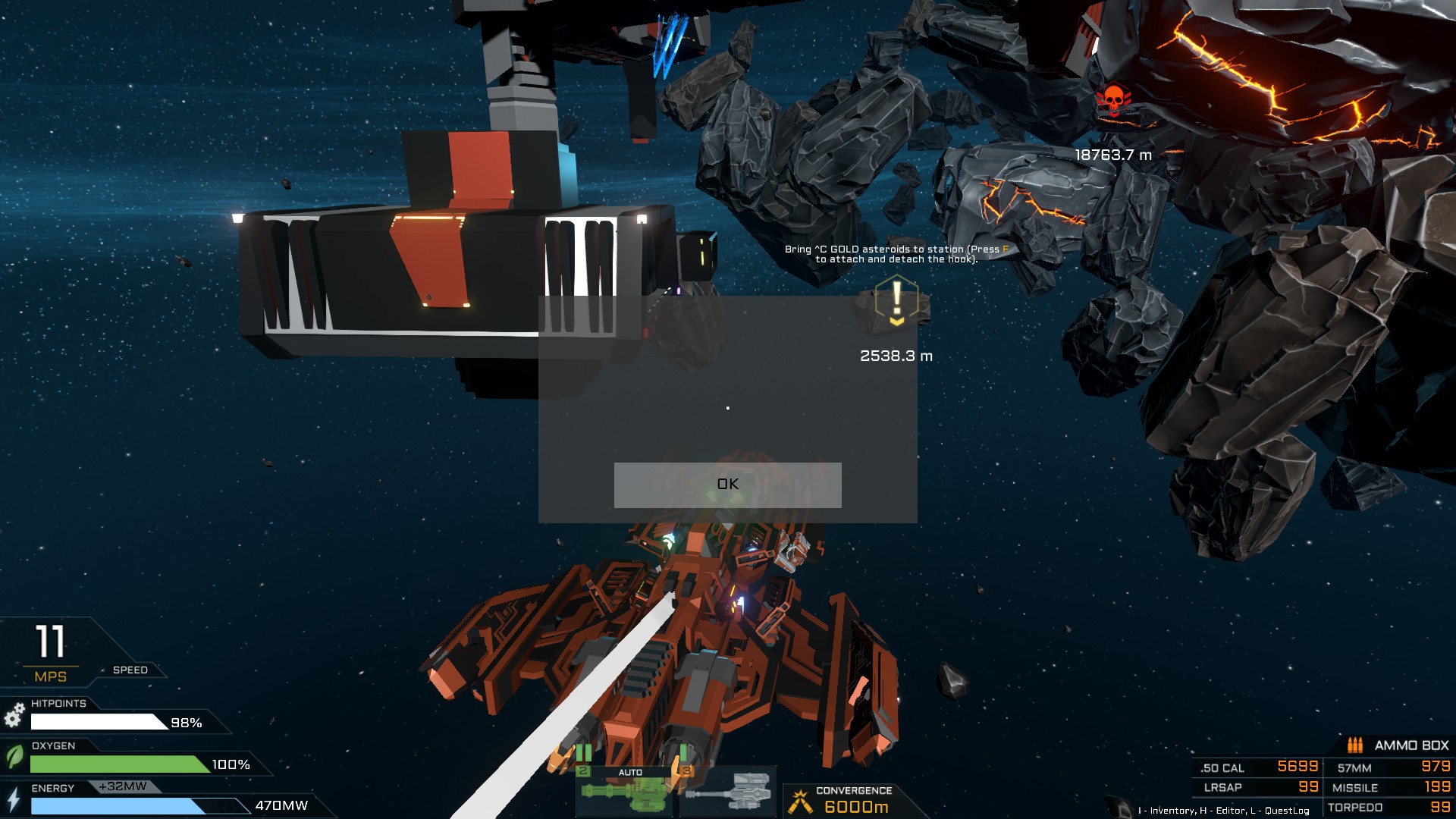 What I do hold against the game, though, is that its core mechanic — space combat — is nowhere near as much fun as it should be. As well as the control issues, one of the design decisions in the game was to make all weapons consume ammunition unless they’re mounted on an enemy ship. So combat typically degenerates into flying around waiting for just the right time to strike, while watching your enemy launch thousands of tons of metal at high velocity towards you with no reload times. I’m sure some of those guys must be carrying more ammunition than would physically fit in their tiny ships! To make it worse, sometimes your weapons won’t fire for some reason, even when they are loaded. Next to other games in the genre, Azulgar’s combat is decidedly unimpressive.

For the price asked, I can’t recommend Azulgar: Star Commanders to anyone but the most patient space combat simulator lover. However, being in a rather cheap bundle recently has lowered the price of entry significantly. When you consider that, it’s not quite so bad.

The game is currently barely playable. Controls are bad, combat is not much fun, writing is terrible, and multiplayer is non-existent. It’s also buggy, and the single-player campaign is extremely short. The touted crafting aspects are limited and the ship building is fiddly, but can eventually provide some fun if you bear with it.

The game has some good ideas, but it has a very, very long way to go yet. 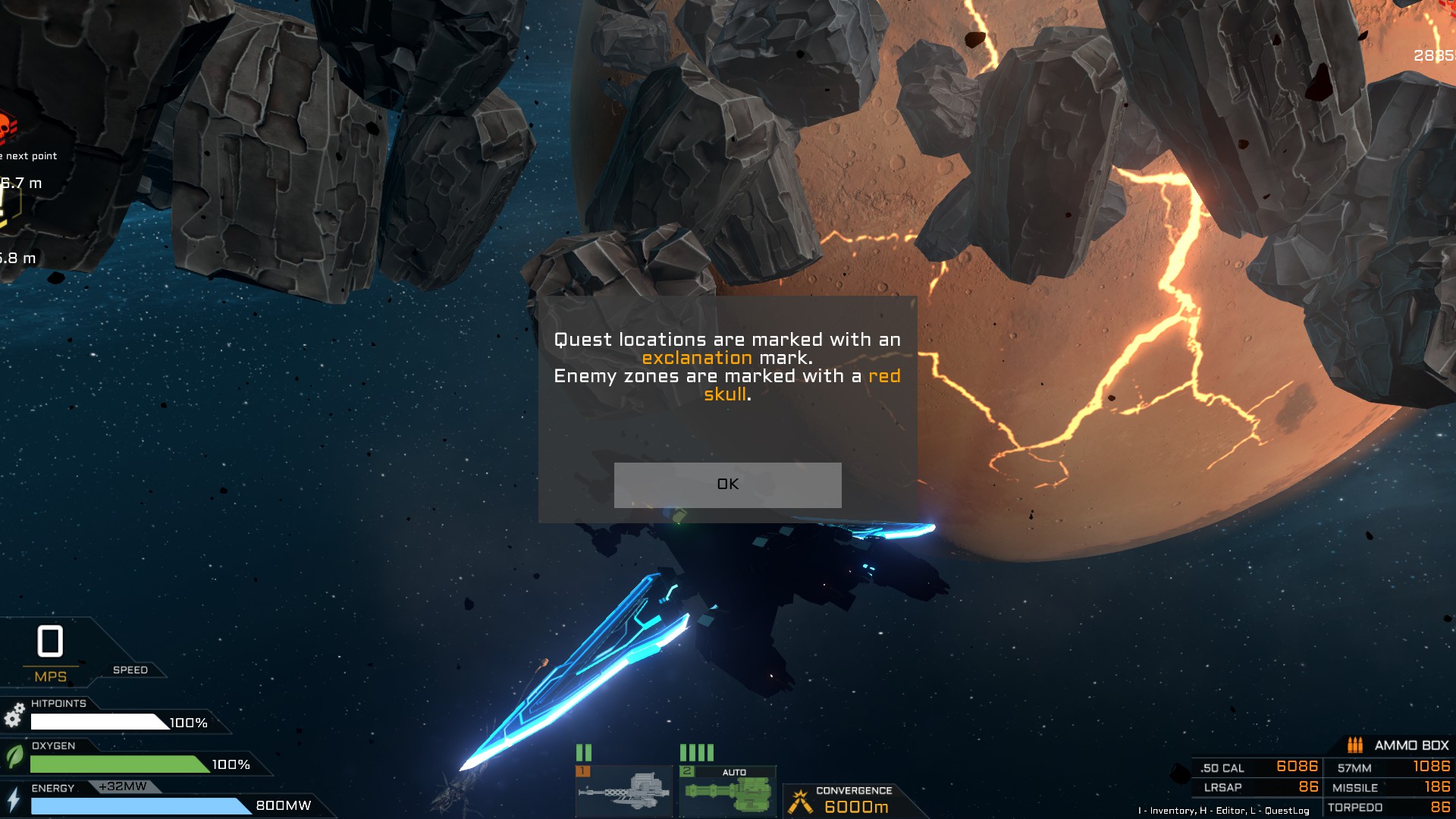