This spinoff of Mindy’s Arc is inspired by Dungeon of the Endless. Is that good or bad?

Same Genre, but in a different package

It didn’t get much attention it seems, but I quite enjoyed a little indie game called Winged Sakura: Mindy’s Arc that came out a few years ago. I can’t deny it had some issues, but the core gameplay loop, a lane defense game similar to Plants VS Zombies if it were hypercharged, was really fun and kept me coming back.  A sequel with similar gameplay has been in the works for a while, and in the meantime we have a spinoff starring the same characters.

The story’s a bit vague, I’d imagine to avoid giving away what happens in that sequel, but due to shenanigans Mindy and her Sakuras (a guardian spirit, basically) Minzy and Nino find themselves stuck in a labyrinth that seems to have no end. There they meet Mimi and Lulu, two administrators of the labyrinth who join up to help them escape.

I could make some big ‘if this sounds familiar’ paragraph here, but I’ll just go and say it’s essentially Dungeon of the Endless with some changes. If you haven’t played that, it was a rogue-like with tower defense elements that came out a few years ago and got some attention. You progress through a dungeon, opening doors, putting down defenses to deal with waves of enemies, and run into random events. Eventually you’ll find the exit to the next floor and you can speak with Mimi, who will begin moving there; you’ll need to make sure she’s safe on the way. 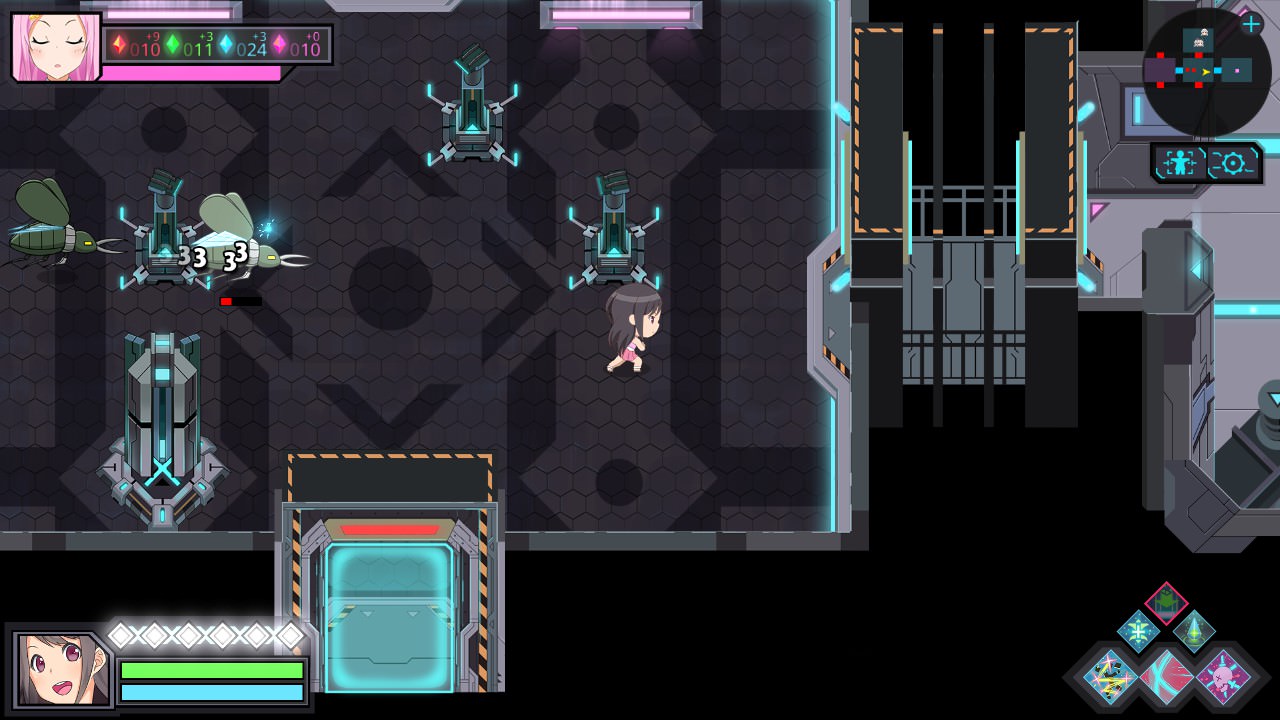 I have to confess it didn’t take me very long to bounce off Dungeon of the Endless. After a little while I started to see cracks: not only was the game fairly difficult, I felt it relied on a pretty strict meta of a balanced team and getting very ideal choke points to deal with enemies. A few mistakes could spell the end of your run. It felt like there was a good game in there regardless though, and I felt this developer could be the one to bring it out.

Now the main difference between this game and Dungeon of the Endless is that in that game you had a full team of people, up to four, while here you pick one to control directly. This means it can feel more like an action game than a tactical experience, but you also won’t be stuck watching as your team gets overwhelmed because your opportunity to stop it was a few moves ago.

There are four characters to select: Mindy, who can pick all of the classes, and Minzy, Nino, and Lulu, who are locked to Archer, Assassin, and Mage respectively. All of them have different stats, and Mindy’s change depending what you pick for her, so you can play around with who you feel is best at what. It would be nice to have that shown before you start up a run though since it doesn’t seem you can at the moment. As far as attacking goes, there’s a light one and a heavy attack which costs MP, as well as a defensive option and a super move you can use when you build up enough charges using the normal attack. I was into this idea but everything feels a little clunky, particularly with the Archer class where a lot of your shots will miss. 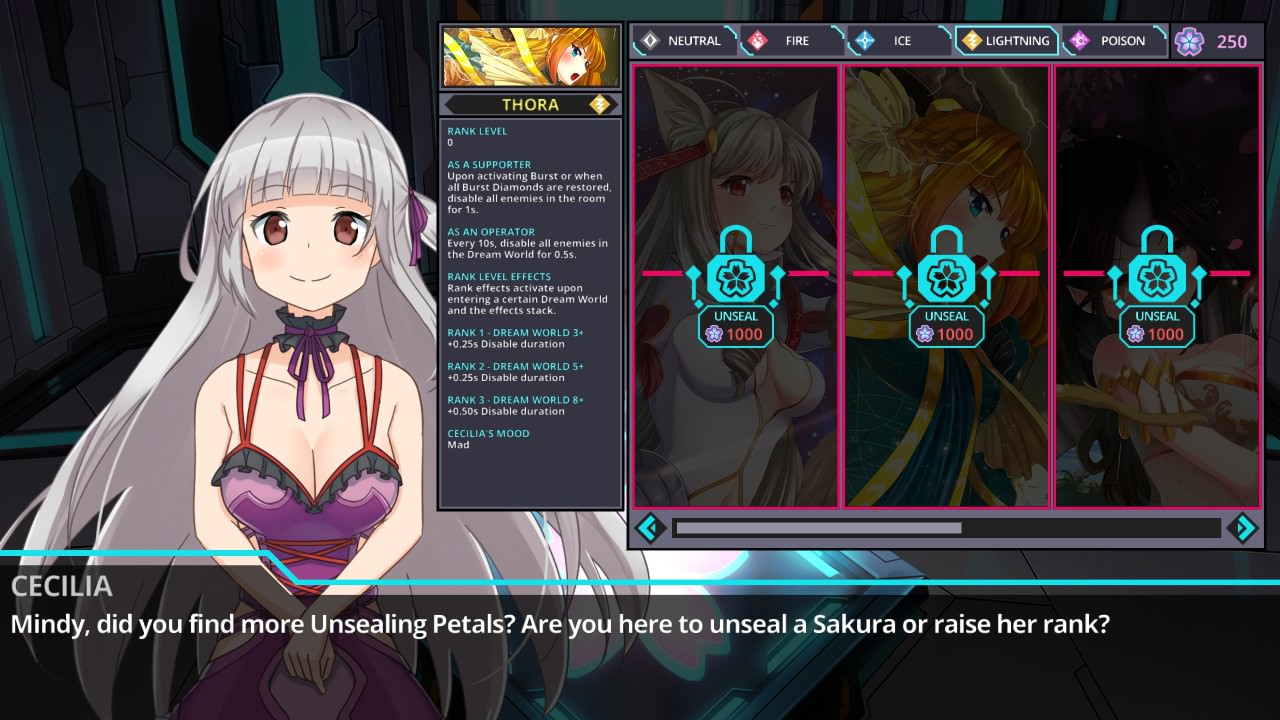 You can also select from various Sakura you unlock at the store, using Sakura Petals earned from progressing in the game: these can have various effects on you and the Towers you build, depending on where you equip them. You can only pick from one when starting off though.

I’ve gotten about halfway through the game so far, up to the sixth floor. I found some of my criticisms from Dungeon of the Endless were still around, however. For one, you’re still reliant on upgrading Towers and unlocking more as you go through the dungeon, so you’re really reliant on finding places to upgrade them and waiting while you open more doors. There are also still enemies with different targets, so soon you’ll find ones that go after your towers, and eventually, ones that go after the doors.

This was ultimately a big reason why I quit Dungeon of the Endless because if you let them open a door that way, it spawns more monsters. You can be doomed if it happens even once when they start showing up. So you needed to have a hero on your team who could move in past other enemies and kill them, which not everyone could do. It’s actually worse here since you only have one character and them going down kicks you out of the dungeon the same as if Mimi does. On the flip side though, if you didn’t mind this stuff in Dungeon of the Endless, you should probably acclimate well. 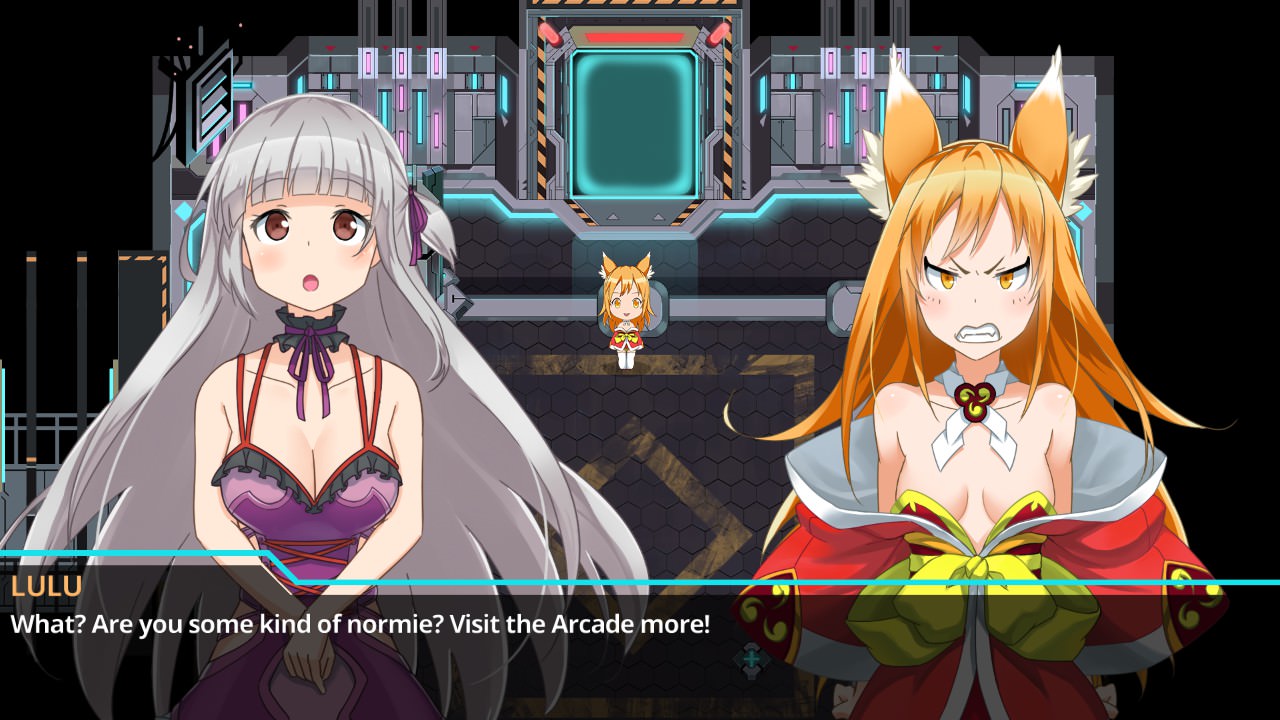 My last criticism doesn’t have anything to do with the gameplay, but the story. It was pretty corny in the original game, but not really offensive. This one is much better translated, but on the other hand, there’s a lot more of it and more dumb humor; references to groping and panties, and as you can see it’s not above some memes too. I probably would ignore them, but they do reward you with Sakura Petals. I just sit through them and occasionally roll my eyes.

All in all, while Endless Dream is not exactly a bad game, the one it was inspired by is a title I grew to dislike pretty quickly, and it doesn’t innovate on it enough to turn me around on it. If you liked Dungeon of the Endless, that’s fine, and you may enjoy a different spin on it. If that’s not a game you enjoy, then you may want to Pause before picking this game up.