Xenomarine is an old-skool rogue-like dungeon crawler in space. Take the role of the wussiest, most ill-equipped space marine you’ve ever seen and see how long you can survive.

Xenomarine, the debut Steam title from indie developer, Fourfold Games, is an old-skool turn-based, tile-based rogue-like dungeon crawler, though in this case the dungeon is a “dark alien-infested space station”. You play a xenomarine. I’m not entirely sure what that is, but it seems to be some sort of ill-equipped, mostly untrained, and slightly wussy futuristic soldier. The rest of your squad has been wiped out and you find yourself alone in a gloomy metal corridor, with only a crowbar, a flashlight, a couple of medkits, and your worn armor.

Xenomarine plays from the traditional top-down view, with procedurally generated levels made up of a number of two-dimensional floor, wall, door, and obstacle tiles. Character and enemy sprites are drawn top down, too, limiting the options for interesting animations somewhat, but remaining true to the genre.

The tileset itself seems fairly limited, so levels mostly look very similar to each other. There only seems to be a relatively small number of different room types so far. Tile graphics are detailed and well drawn, with animations and lighting effects that help to make the game look more modern, but more variation would definitely be a good thing. 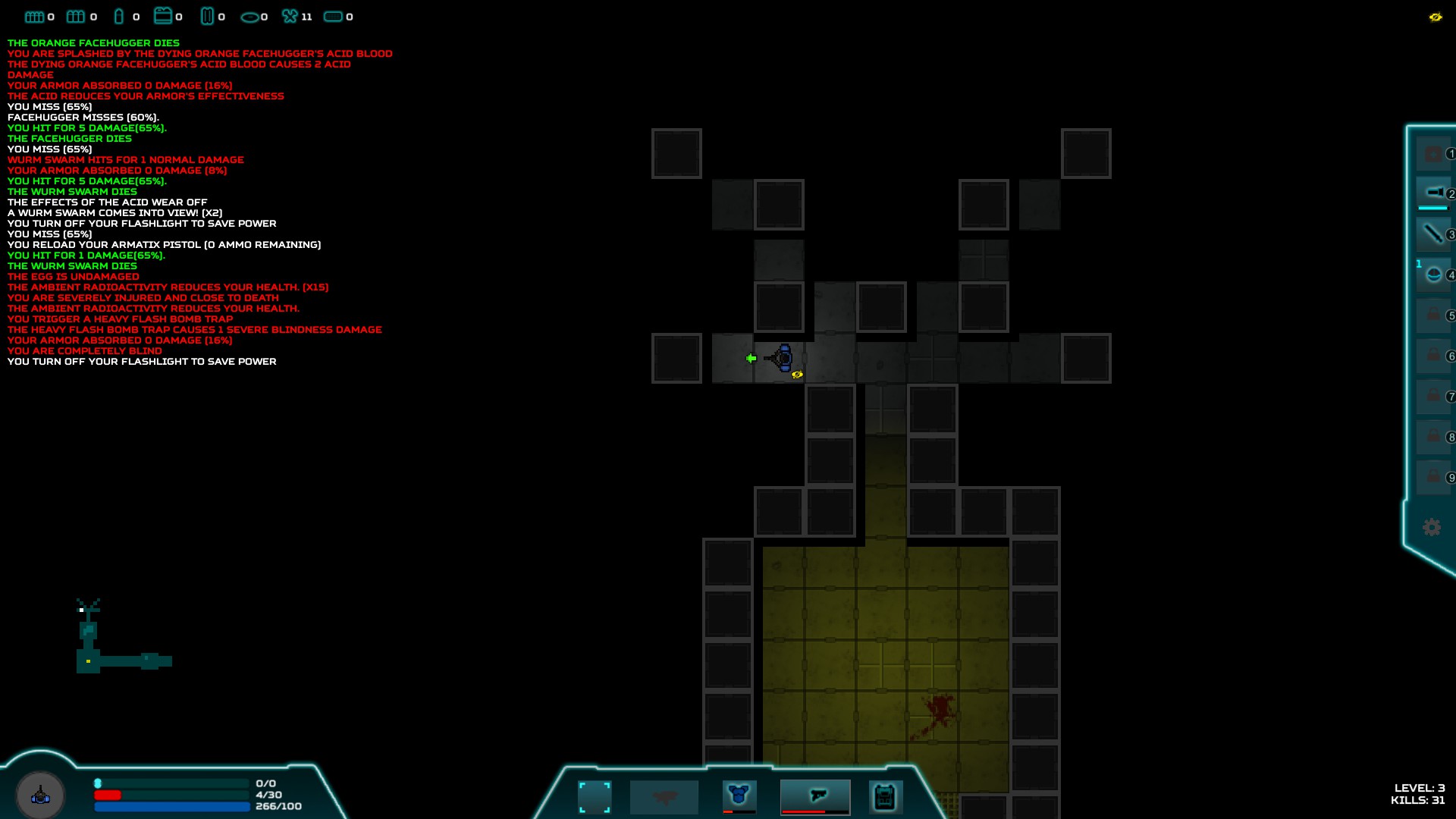 The xenomarine sprite has little personality, but does change with equipped items and armor. Enemy graphics are fine, though there’s some re-coloring to produce new enemy types. As with the tiles, at the moment there’s not enough variance in the enemies to keep the game interesting, but the developer has already stated that more are on the way.

The interface is simple and works well, with predictable hotkeys and thorough tooltips. The zoom range is excellent, too. The first build I played had some camera issues, but the developer has already fixed them and the camera works brilliantly now. 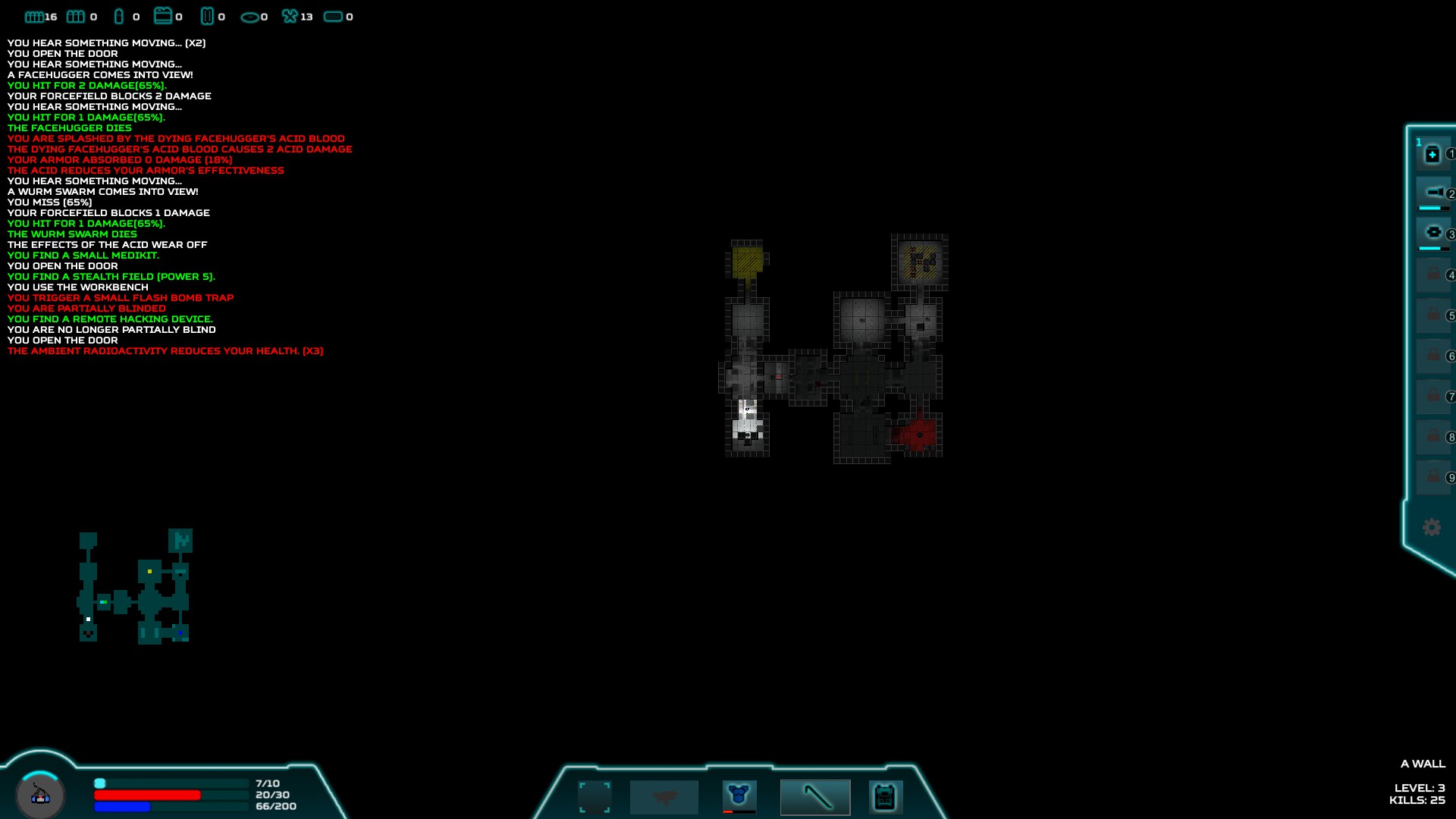 There are no detail settings, but I wouldn’t expect a modern PC to encounter any performance issues.

Sound and music have never really been a big part of the traditional rogue-like genre, and Xenomarine is no exception.

I don’t think there’s any music in the game at all. Sound effects are useful and are played when you expect they would be — shooting, swinging weapons, taking damage, etc — but they, too, seem a bit lacking in variation and “oomph”. They’re not bad, but not fantastic either.

There are no voices, though a nice female AI voice for the terminals wouldn’t go astray. 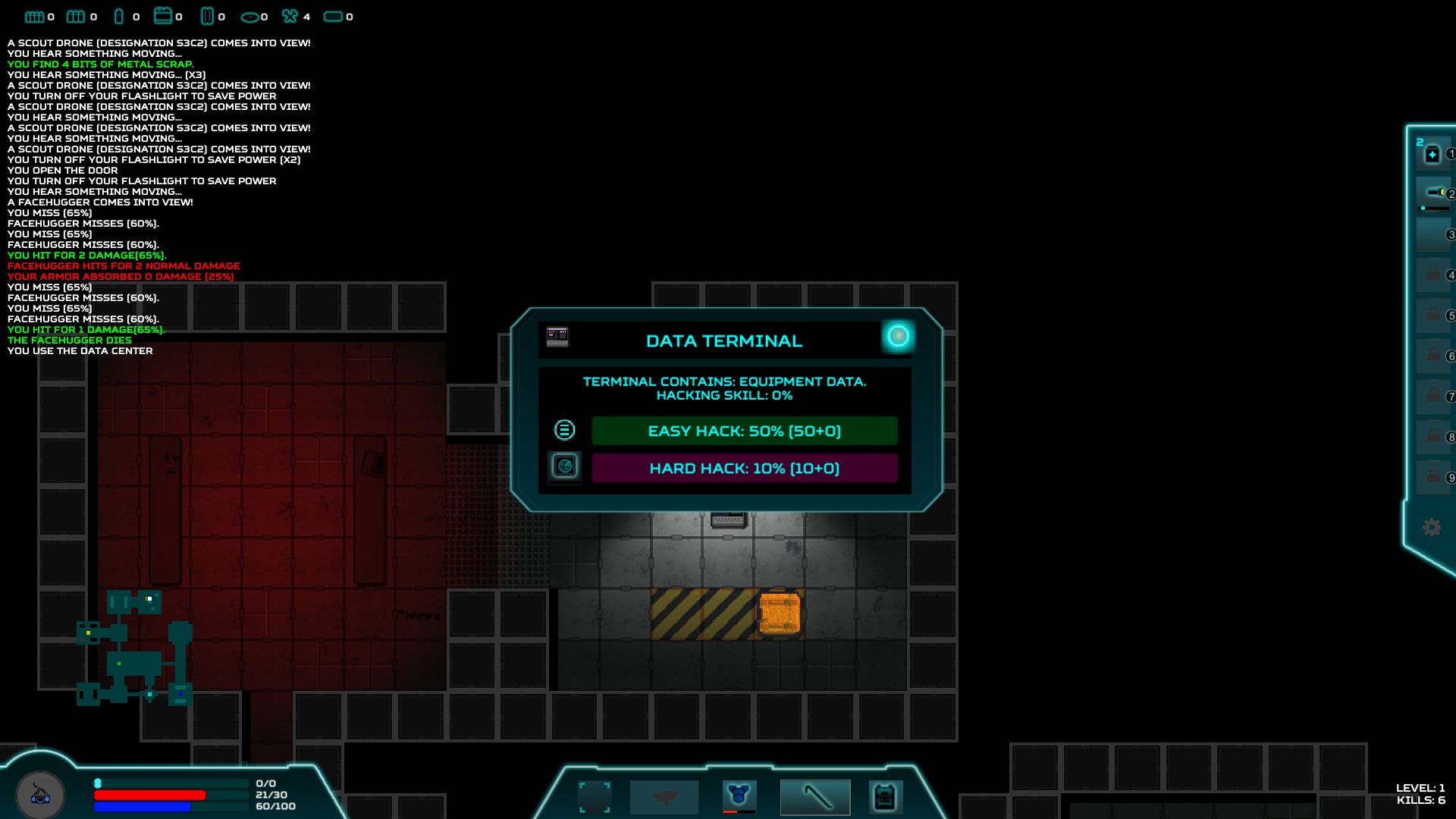 Each procedurally generated level starts with you in a silent, dark room or corridor, your limited line of sight illuminating little. You move around carefully, one step at a time, in search of equipment to help you survive and reach the exit teleporter, which takes you to the next level. Movement uses one of three keyboard control modes, with each move, rotation, or action taking one turn. Enemies on the level seem to see you long before you see them, so you’ll almost always be on the back foot. 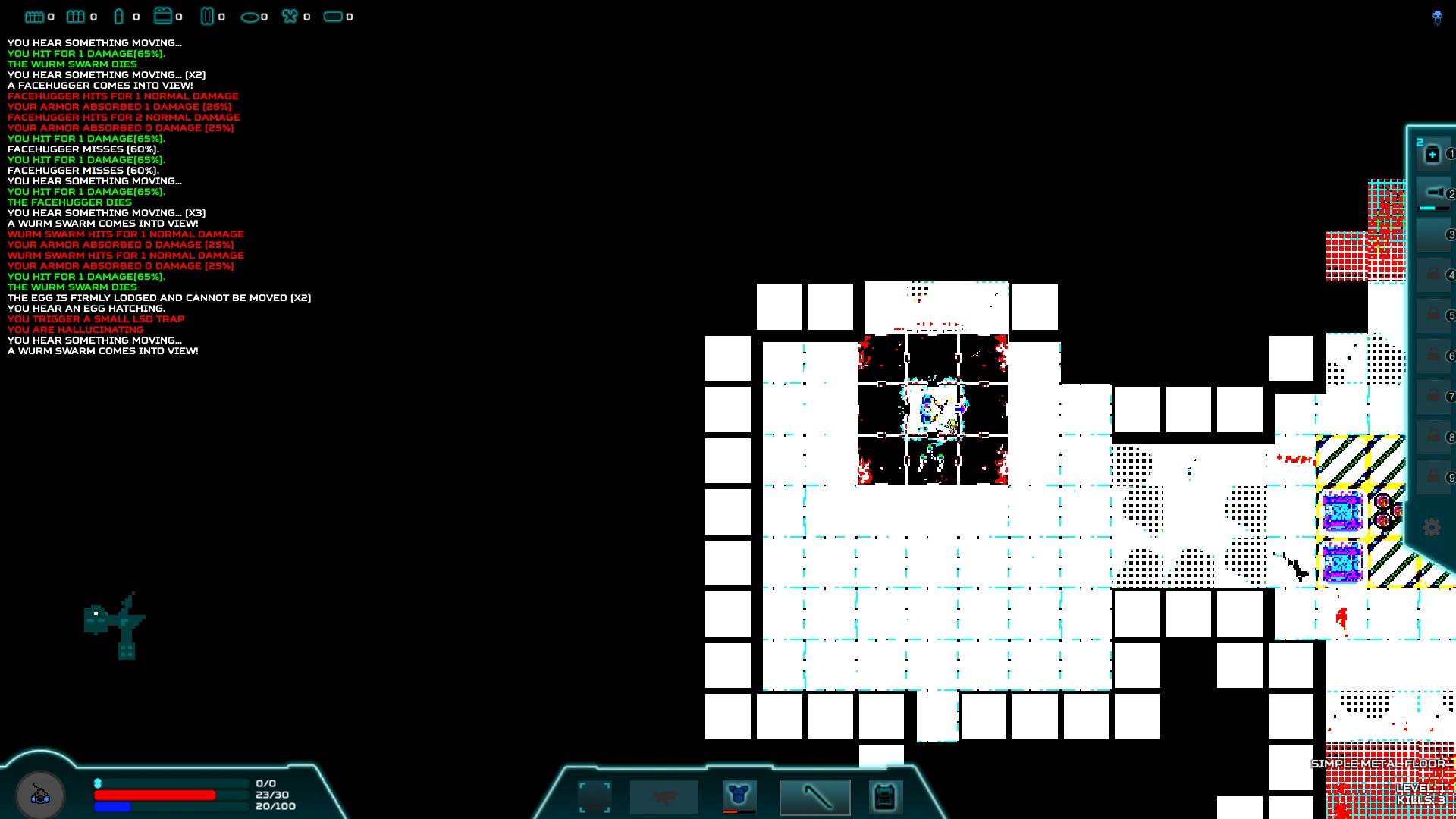 When enemies show themselves you try to kill them as quickly as possible, avoiding their attacks if you can. The more of a certain enemy type you defeat, the more you learn about them, including hit points and resistances. Killing enemies and completing security terminal quests earn you experience points; enough of these and you can learn or upgrade a skill at a terminal. Skills range from combat bonuses with certain weapon types to crafting and hacking. 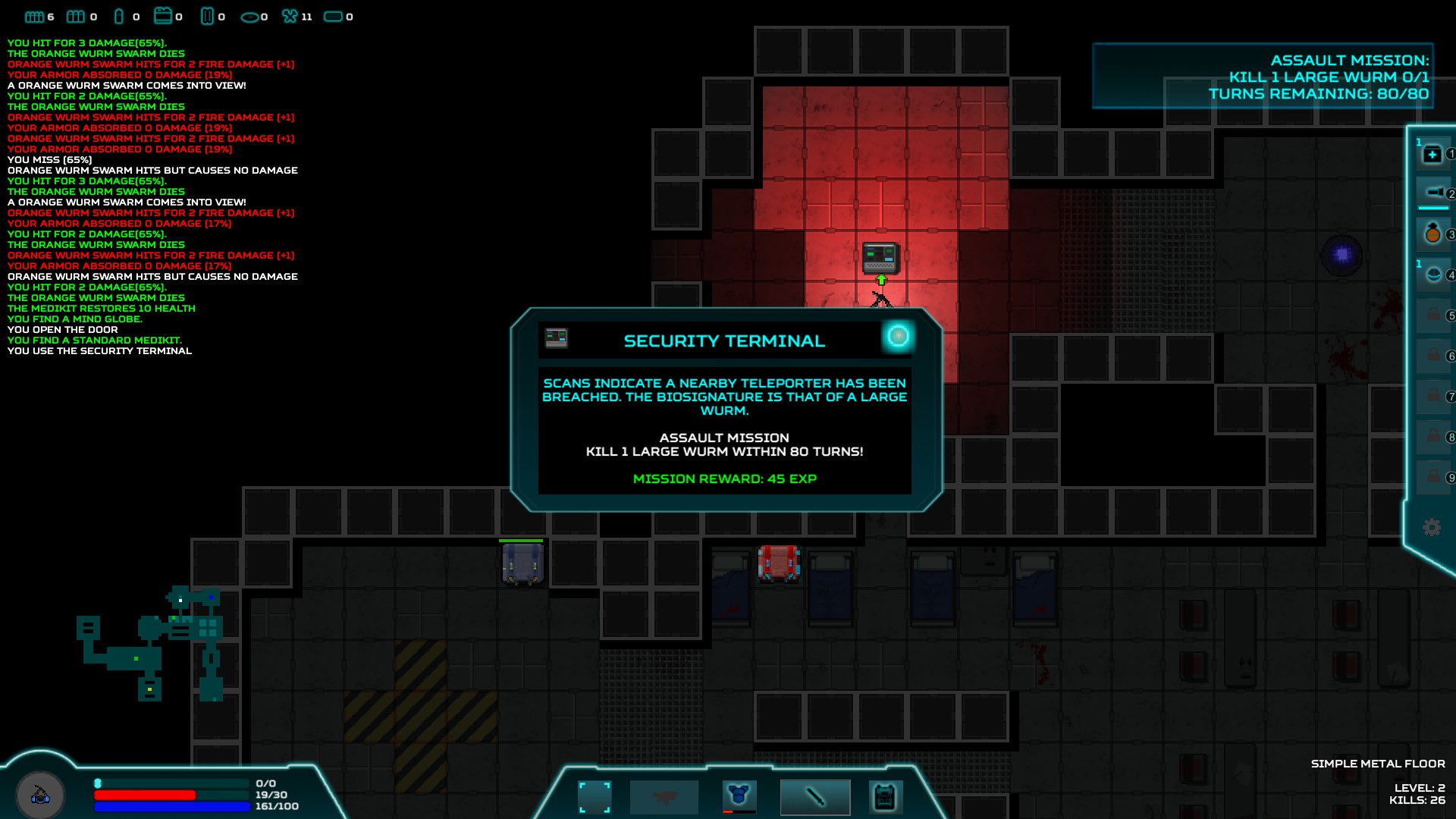 Xenomarine features two game modes: adventure and rogue-like. The game plays the same in both modes, with the only difference being what happens when you save and exit or when you die. Rogue-like mode has permadeath, and when you continue after a save and exit in this mode, your game is restored exactly where you left it. Adventure mode restarts you back at the beginning of your most recent level (with loot re-generated) both when you die and when you restore a saved game after exiting. The latter is a little annoying; it would be better if restoring enabled you to resume where you left off.

Xenomarine is still in Early access, and as such is incomplete. As mentioned earlier, there’s a distinct lack of variation in enemies, weapons, items, skills, crafting, and pretty much everything. There are some features missing, too, which I hope will be forthcoming, as the addition of them would dramatically increase playability (and replayability): a bestiary, unique items, and unique creatures. 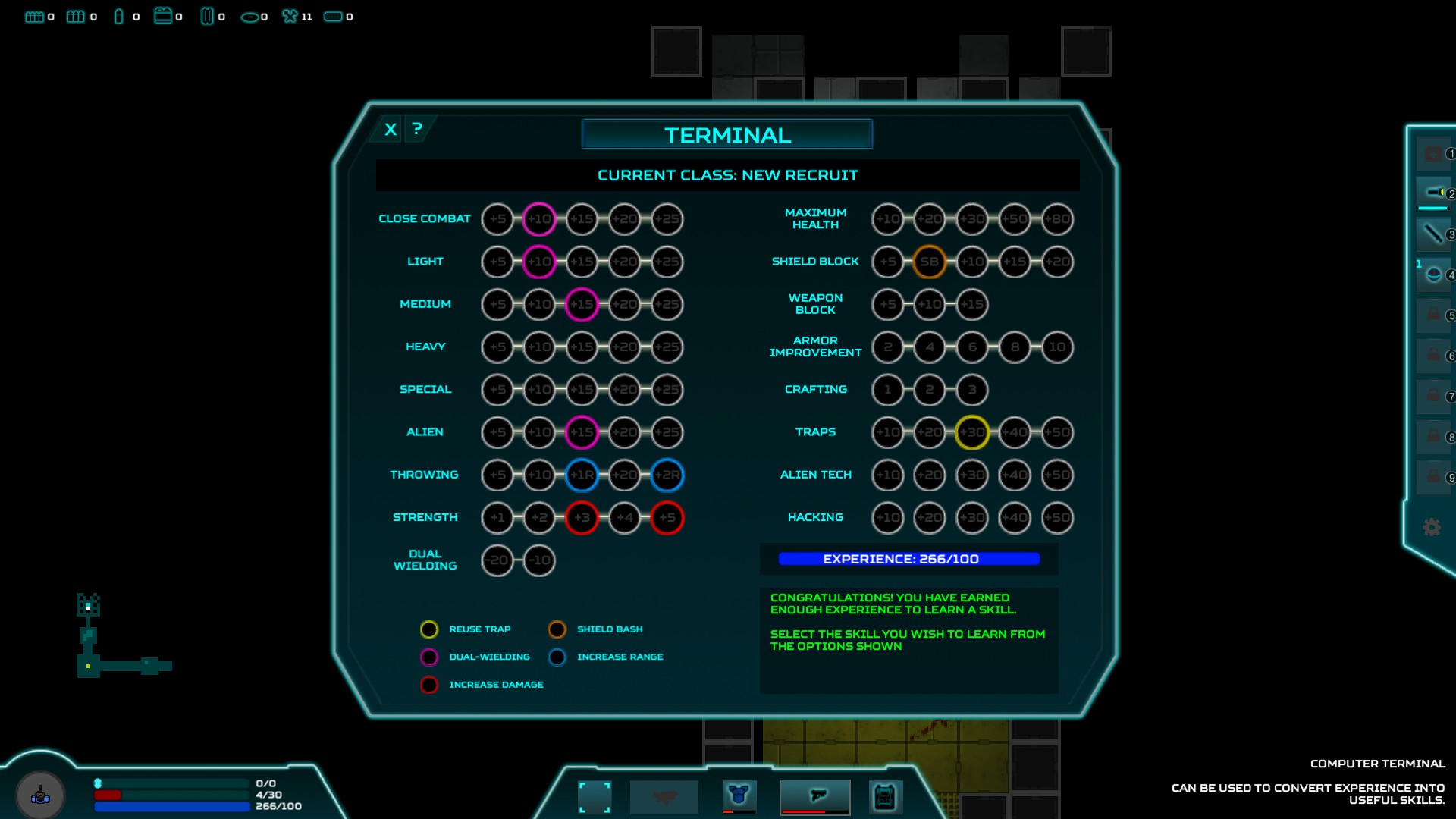 There are a number of issues too, which I hope will be improved before release. The foremost of these is the line of sight, which is far too limited. The current implementation is as if the character is half blind or wearing someone else’s spectacles. He can only see a few tiles in front of him, even in a generator-lit level along an empty corridor while holding a fully powered flashlight. To make it worse, he seems to have no peripheral vision: as soon as anything moves next to him it vanishes. And since turning takes a turn, which then gives the alien another turn, you end up spending a lot of time just turning on the spot to track things moving. It’s also very easy to become flanked or surrounded since your vision is so limited.

Other areas that could do with improvement include movement along diagonals; crafting, which is fairly limited in any case, but also relies on sometimes very rare scrap; hacking, which is very limited for the skill cost; and the reliance on ammunition-based weapons when ammunition is so scarce. This last one is a big one; with the weapons currently in the game I always find myself reverting back to a melee weapon most of the time, as both ammunition and scrap can be hard to find. That kills the appeal of the otherwise cool weapons.

Given that I almost always seem to complain about grammar in the games I review, I feel I should comment on the writing in Xenomarine. It’s excellent. Amongst all of the tooltips, menus, and in-game text, I’ve only seen a couple of errors, and one of those is code-based: “You find a Armatix Pistol”. Well done! 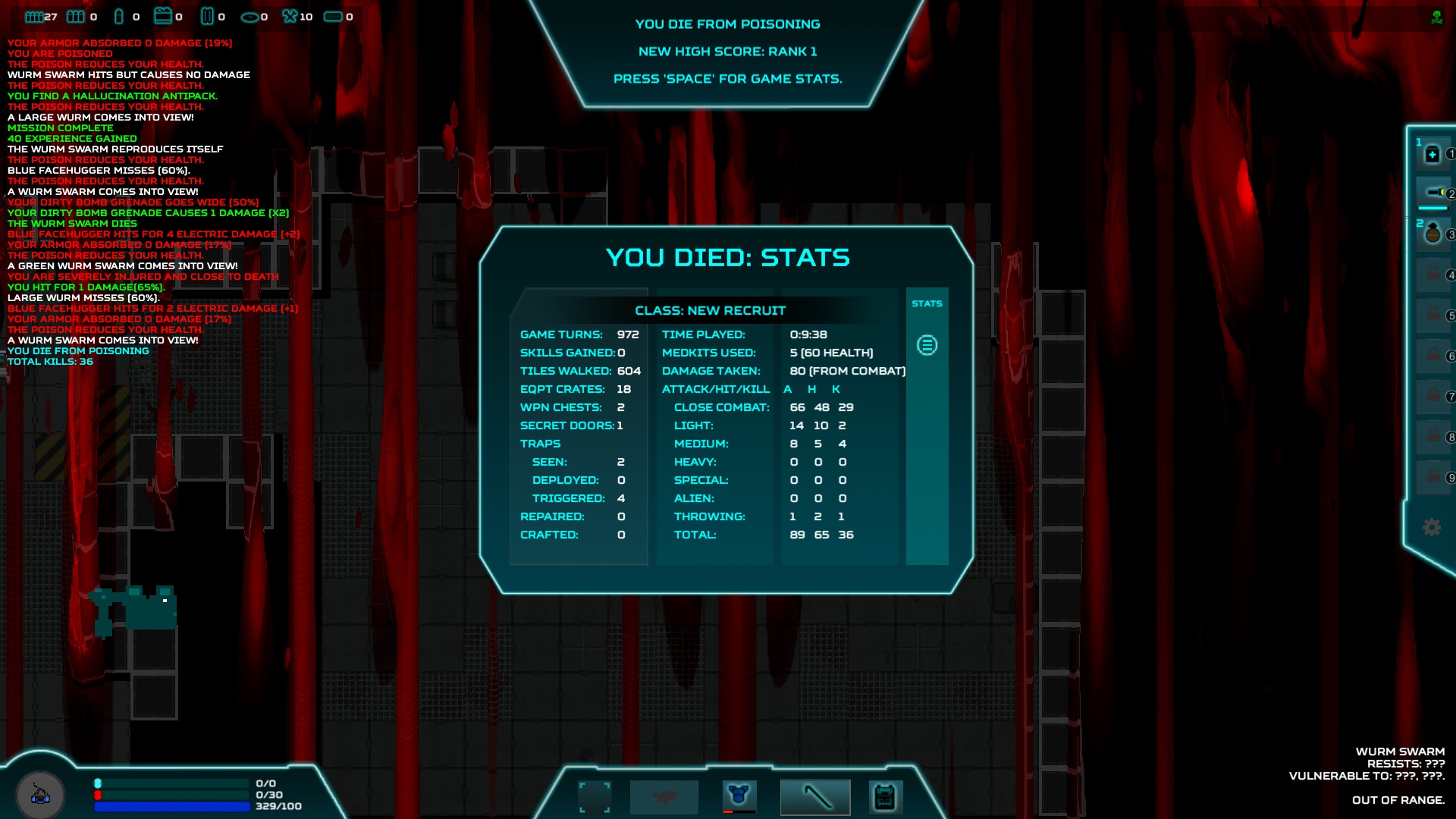 Xenomarine has the makings of a great game. The tileset is fairly repetitive and the game needs more enemy types (already planned), as well as some unique enemies, a browsable bestiary, and more of pretty much everything. Sounds are limited, too, though that’s normal for the genre. In my opinion, there needs to be either less reliance on ranged weapons or much more ammunition available, and some nice traditional rogue-like procedurally generated unique loot and enemies. It’s not quite there yet — the content is lacking and there’s not yet enough variation to keep it from feeling a bit bland and ‘samey’ — but the foundations are solid and it’s made me want to go and play some of the classics again.

I think the game is a little bit pricey for its current state, especially since the game with which I think it has the most in common — Angband — is free. But it plays pretty well and if you enjoy its particular brand of masochism then even in its current state it will keep you busy for many hours, so it’s not bad value for money either. And it will only get better.

If you’re a fan of traditional rogue-like dungeon crawlers then you should definitely check out Xenomarine. It may just scratch your gaming itch.

You have a good feeling about this level … .