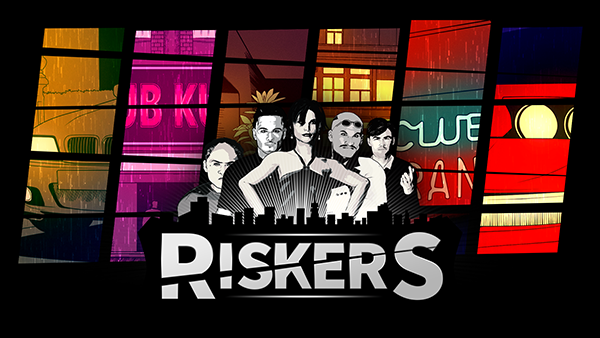 Riskers is an amusing cross between an early, top-down GTA and Hotline Miami. It has interesting characters and a good sense of humor; it’s just a tad short.

Riskers is the debut Steam title from developers ShotX Studio and in it, you play Rick Paradis, an ex-con trying to turn his life around, working with his brother, John, as a garbage man in Stiltton City. While doing your rounds one day, Rick finds a briefcase full of money in a bin and, being the pillar of the community that he is, keeps it for himself. Two days later he comes home to find his apartment door open, John shot dead on the floor, the briefcase gone, and a group of armed goons waiting for him.

Not one to take such behavior lying down, Rick grabs his trusty baseball bat and makes quick work of the waiting scum. One escapes, though, and Rick pursues him, opening the way to the criminal underworld of Stillton city.

The game is played from a top-down perspective and the graphical style is reminiscent of the original Grand Theft Auto, though updated with smoother models, some fancy effects, and other modern graphical touches. It ends up looking a bit blurry, but relatively nice; more reminiscent of GTA 2 than its predecessor. 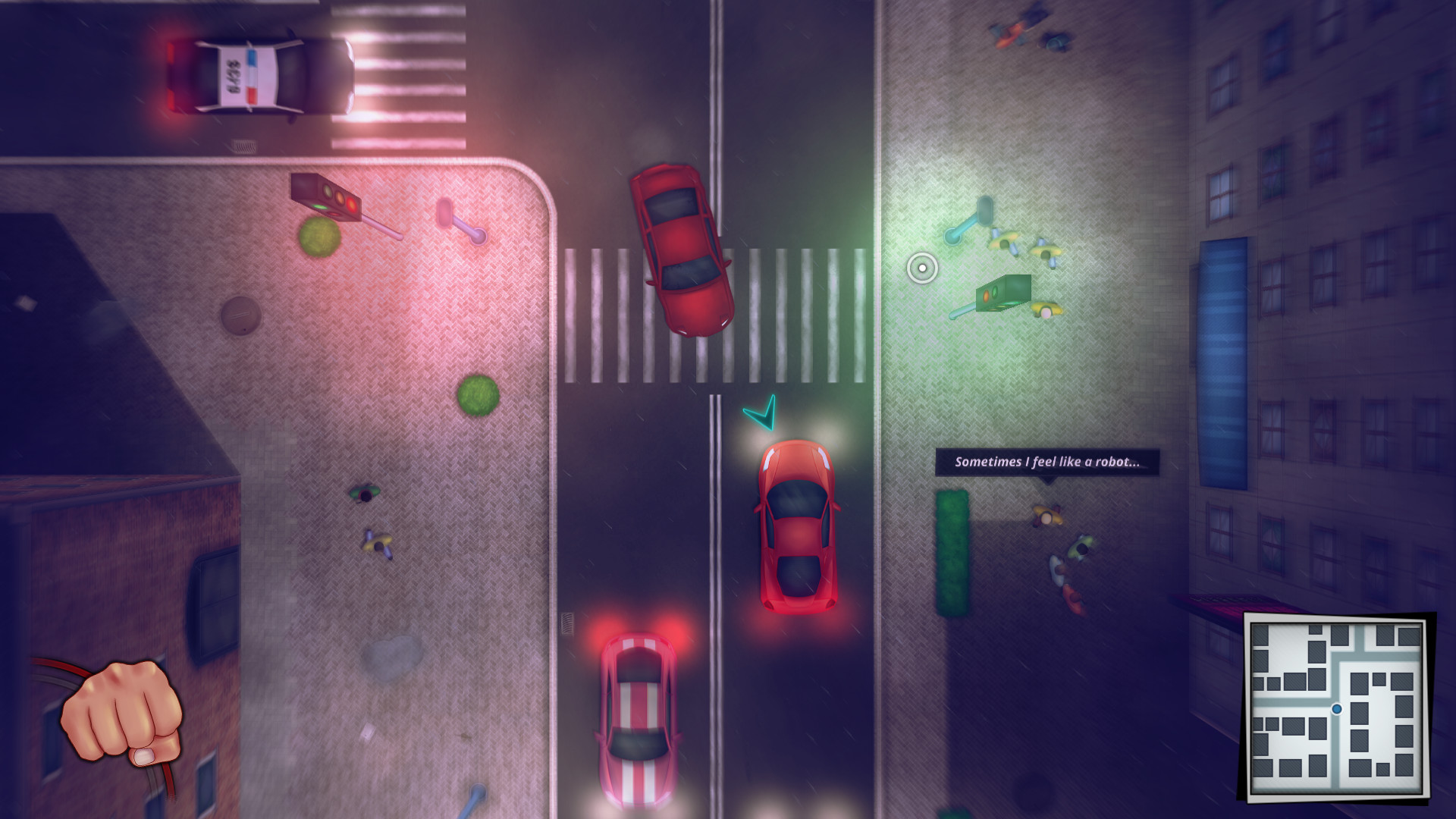 The city looks very square and uniform, with a very small number of unique areas breaking up the grid-like monotony. It’s quite small, though, and when you travel off the main streets into the alleyways at the edge of the map, you hit the good old invisible wall. “So that’s what an invisible barrier looks like.”

Characters are typical of top-down games, looking a lot like characters from the first two GTA games. Animations are a bit poor, though, with punching looking very weak and baseball bat swings looking like Rick has chronic wrist pain. There are a few different car models, all with very plain paint jobs, which deform when damaged. Weather effects are quite nice, yet lightning could be better.

There’s no manual camera zoom and the default is zoomed in way too far for driving and long-range combat. It automatically zooms out when you’re driving at speed, but it’s not enough; manual control would be much better. The sniper scope effect is pretty cool, but again the camera restrictions make that gun almost useless. Cutscenes are graphic-novel style, with some basic animations; they’re okay, but look a bit amateurish. 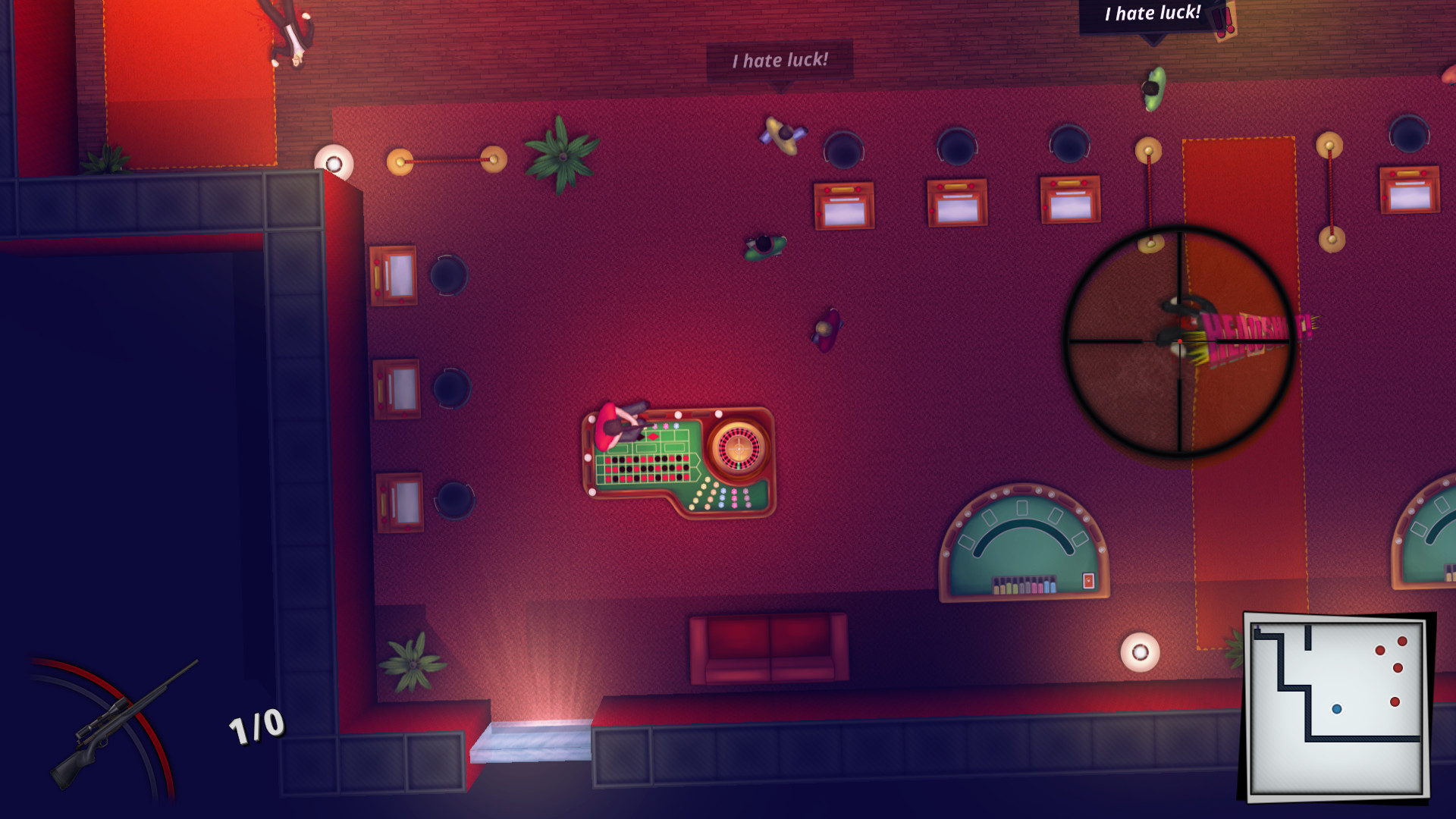 The game doesn’t include any graphics options, which is a bit of a shame because antialiasing would be a useful addition, as would a full-screen / windowed mode toggle. The game performance also sometimes surprisingly slows down a bit when there’s a lot of car-based action on screen.

The title music is minimalist but somehow catchy; it’s a simple beat with a single-instrument melody played with only a few notes, repeated over and over. In-game music seems to expand on this style, introducing more instruments with a distinct dance music feel, but retaining the same sort of repetitive beats and riffs. Combat sections are higher tempo and more dramatic but don’t feel out of place. I’m not describing it that well, but it’s actually rather good.

In-game sounds aren’t so good. The garbage truck sounds extremely similar to other cars, which all sound a bit like a cheap electric quadcopter/drone motor that’s on its last legs. Distant city sounds are nice in some parts, but there are no sounds from other pedestrians or traffic except for horns. Sometimes vehicle collisions don’t even cause a sound at all — music conflicts, maybe? Rick’s footsteps are stupidly loud.

In the indoor sections, there are music and gunshots and that’s about it: no swings, hits, grunts, screams, or anything. There’s basically no auditory feedback.

Riskers sells itself as a “unique mix of game genres”. I’m not sure if that’s true; it’s basically an early (top-down) Grand Theft Auto coupled with some indoor sections for combat, reminiscent of a simplified Hotline Miami. Now that’s not a bad thing — it works rather well — but don’t be fooled; there’s nothing revolutionary here.

The game is split into ‘open world’ city-based activities and indoor combat-based activities. The open world’ is a bit naff; you have a pointer on the map to your current objective, you can’t set waypoints, and there’s no legend for the map, but you can drive or wander about Stiltton city causing havoc. The open world elements seem to be random missions, car races, etc. They’re better than nothing, but really not that interesting or exciting, with the highlights being some of the crazy characters you’ll meet. 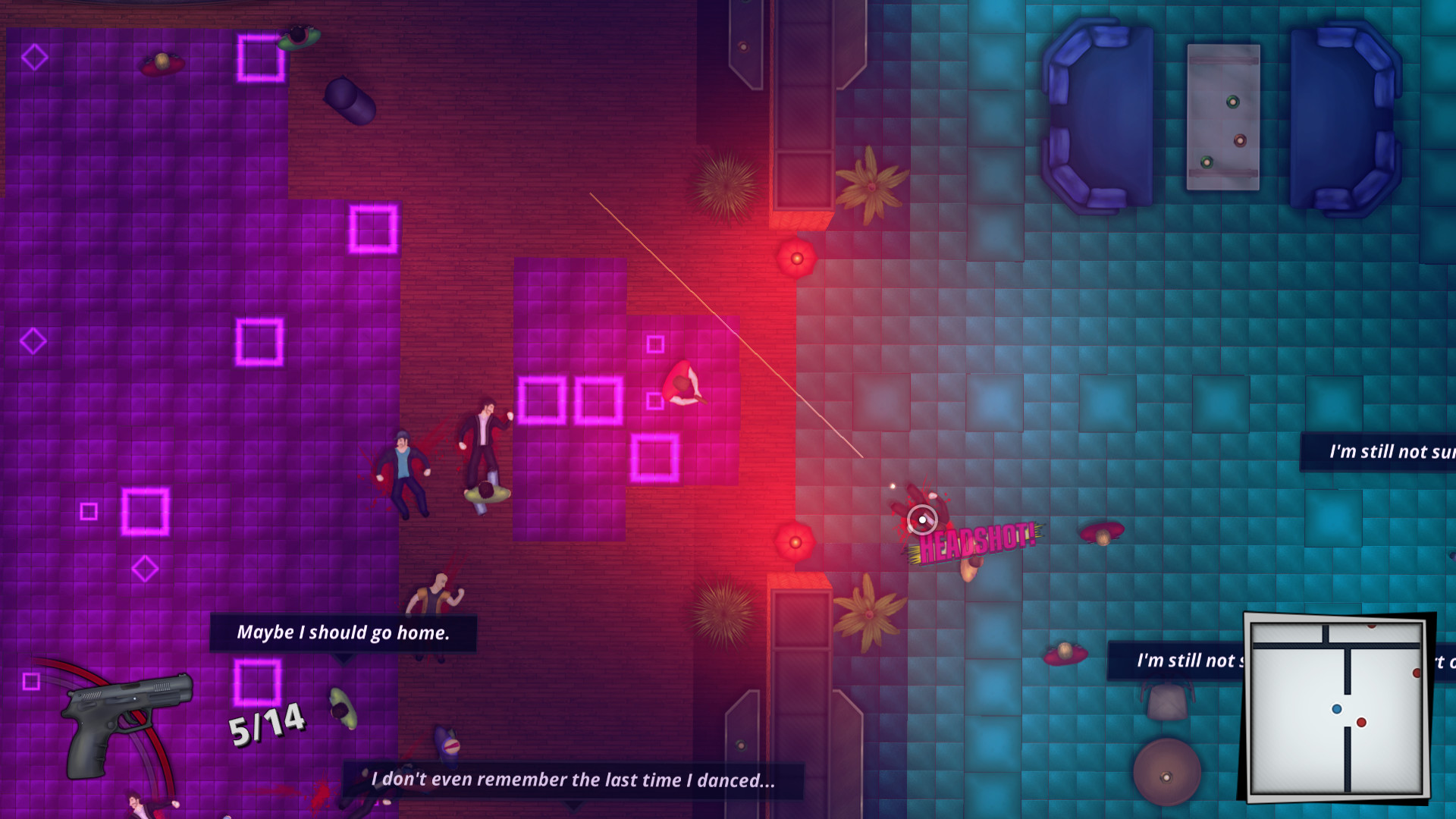 In the city, you can run up to any car and steal it, GTA style, but unlike GTA, the car handling is atrocious. The AI of other drivers is awful, too, with most cars just stopping and letting you push them around (slowly). Driving in reverse is also painfully slow. The driving sections are bad enough that the races and other car-based missions may have you rage quitting on occasion. The random comments from Rick and passers-by are quite amusing: “Maybe I should grow a beard.”

The combat missions are scripted and linear: enter an enemy-controlled building and kill everyone until you get to the end. You start each of these armed with nothing but your baseball bat, so the beginning of each mission is always about stealth and tactics until you have some guns and ammunition, and then they turn into bullet storms. There are only two melee weapons (fist, baseball bat) and six ranged weapons (pistol, shotgun, submachine gun, assault rifle, sniper, grenade launcher), and there are no upgrades or other variations. Enemies all react the same way too, so you’ll very quickly learn how to best neutralize them all.

There are a few weird design decisions that detract from the gameplay and the suspension of disbelief. Visual detection doesn’t make much sense; Rick can sometimes walk around without anyone caring, while at other times they decide he’s an enemy immediately and open fire. Enemies don’t notice their friends lying dead in front of them. And there’s no reward for conserving ammunition or weapons; at the start of each indoor mission Rick’s weapon collection is removed, and you’re left with his fists and baseball bat yet again. 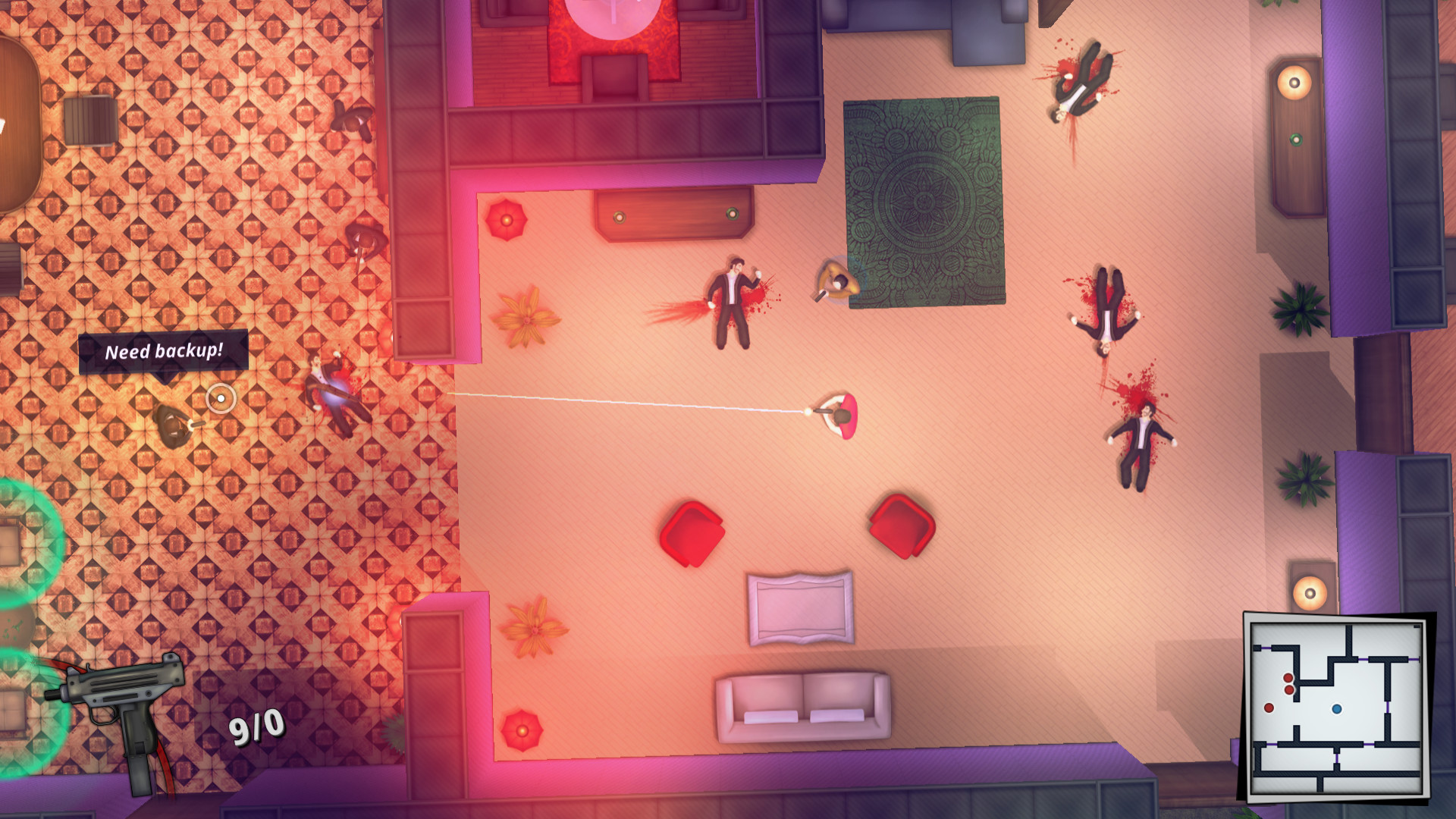 As of the time of this review, the game has a number of bugs too. There are the obvious things, like grammar errors in the writing, but there are a number of more subtle issues as well. Many of the side missions have scripting errors, such as the car crash mission that left Rick frozen after respawning, requiring a restart; or the second cat follower mission, that wouldn’t trigger at all; and the post-riot Babu mission, which gave the same introduction as the riot mission, but then left Rick in a street arena, fighting unarmed against enemy after enemy with no explanation as to why. Collision detection seems a bit off; I noticed that sometimes even shotgun shots would go straight through enemies with no effect. Police will chase and shoot at you when you’re in the middle of dialogue and can’t do anything about it; the colors look weird then you die as soon as the dialogue finishes. I also noticed that F12 doesn’t work for Steam screenshots and the game wouldn’t let me record video, either, but they’re issues that are unlikely to affect most players.

Riskers is by no means a bad game, but it is a bit lacking. It feels like GTA on GTA 2 combined with a simplified Hotline Miami. That’s not bad — it’s actually quite a good mix — but there’s not enough to it; even at a very slow pace, you’ll have finished it in a handful of hours. If the side mission bugs will let you, you can spend that much time again completing all of the side missions and collecting all the achievements, but for the asking price it seems a tad too lean.