A little over 30 years ago, a sci-fi roguelike on the spectrum called Quazatron kept this little Tiger busy with a robot which could strip other robots for parts to fight it’s way to the top of the tower. Cogmind proves some classics never go out of fashion.

It’s funny how games can come full circle. You start out with a tape loading wedge of plastic that needs nearly fifteen minutes just to load one game, you sit there patiently as bit by bit the PC reads the lines of code off of a cassette tape, the same kind which you could ram into your stereo system with it’s very new and shiny compact disc player (oh, when those were the new thing) and when records were still quite a major component of ones listening world because the parents were big into Def Leppard or Mike Oldfield. Those were the days. Quazatron was for me something of a major contributor to my gaming upbringing back when the Spectrum was a big thing over here in the UK (the rest of the world probably looks at the UK and wonders what on earth we were thinking, games on cassettes? you lunatics…) but it was also a time when you could just about slap anything together and form a game from it.

It also gave rise to classics that, to this day, still earn both respect and a following among fans who know their games. Lords of Midnight, the Spectrum’s attempt to render an original take on Lord of the Ring’s “war of the ring” not only proved you could do grand strategy within 48k but you could actually do it brilliantly. It also gave rise to the first wave of interactive fiction, and the many competing engines that yielded stories both imaginative and pants on head silly. Driller proved you could just about wedge a 3D world into the 128k model, though you’d be looking at a slideshow it did damn well try.

One of these classics on the Spectrum was Quazatron. As a roguelike, you’d start at the bottom of a tower with a basic robot with basic components and a limited energy supply, your job was simple, build up the resources and destroy every robot in your way and work your way to the top. Acquiring the resources meant grappling with other robots, hacking them and then salvaging their stuff and replacing your own, progressively more damaged stuff with fresh and shiny parts from the enemies. You were always kept on the move by the dwindling energy supply and the constant draw that your drive and weapons would pull on a never quite big enough battery. It was brilliant, and I always wondered why nobody ever replicated the magic of that game. 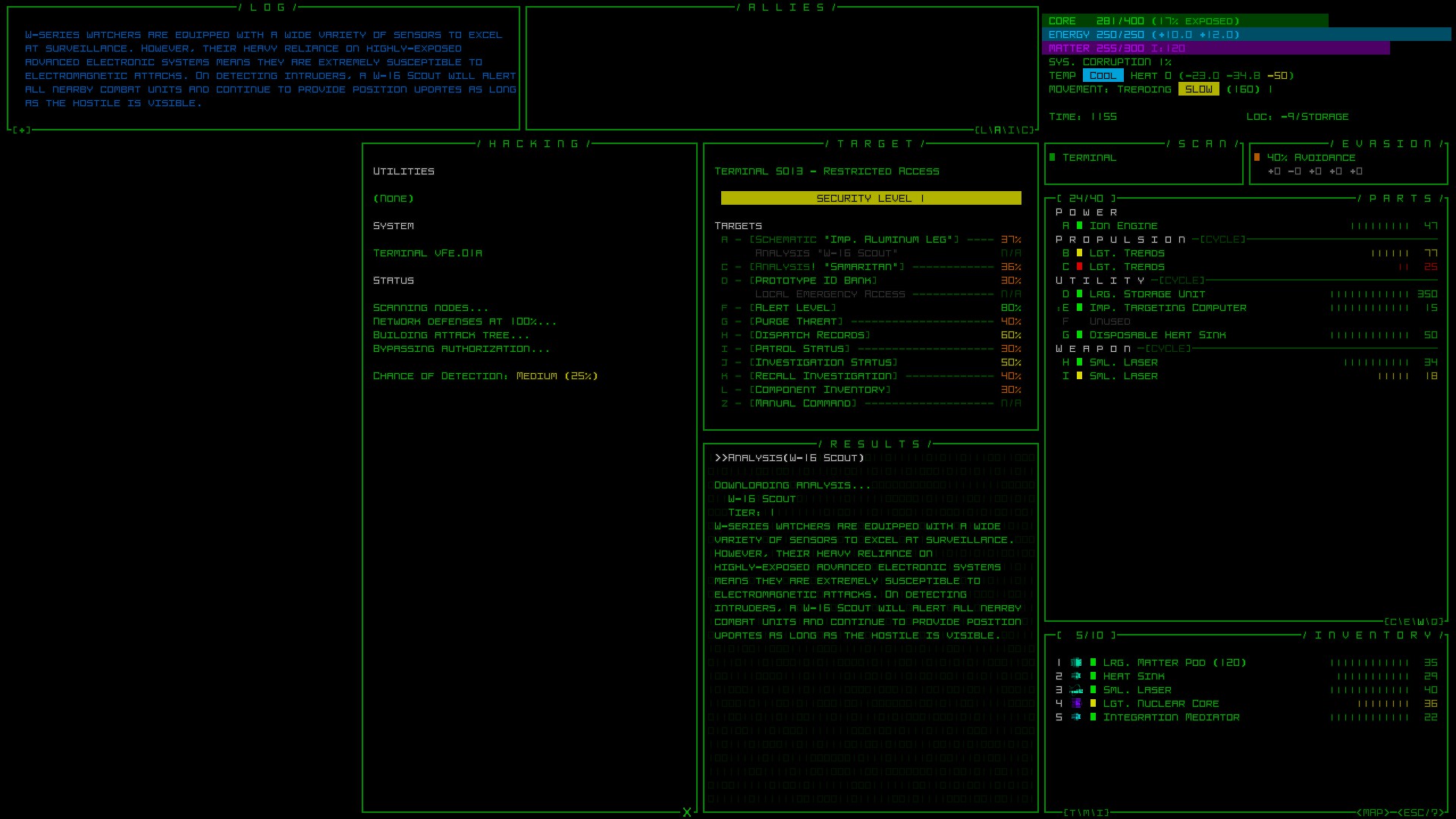 Cogmind is somewhere between Nethack and Quazatron, with a dash of a few other games such as Caves of Qud and Teleglitch that spring to mind. It’s the game I imagined and wanted Quazatron to be when I was little. A much more in-depth version, one with the kind of worldbuilding that goes into near atomic detail through exceptionally descriptive logs and references that can be acquired through interrogating terminals for log entries, references, descriptions, scan data, and so on.

It’s not, however, a given you can just tap terminals and get the info mind, much like everything in this game, terminal hacking, enemy hacking, it’s all subject to the laws of probability and random chance, but unlike a lot of RNG games, you’re very much in control of the RNG in so much as there are items that can tilt things in your favour, if you wish to build a robot that specialises in hacking other robots and terminals to stay under the radar of security, you can do that, if you want to build a robot that can move at the speed of sound and dodge most of the hostility that might come your way, that’s doable, or if you’re like me, if you want to build a tracked tank that’s made out of armour and guns, and unleash the dakka, well, that’s doable too. 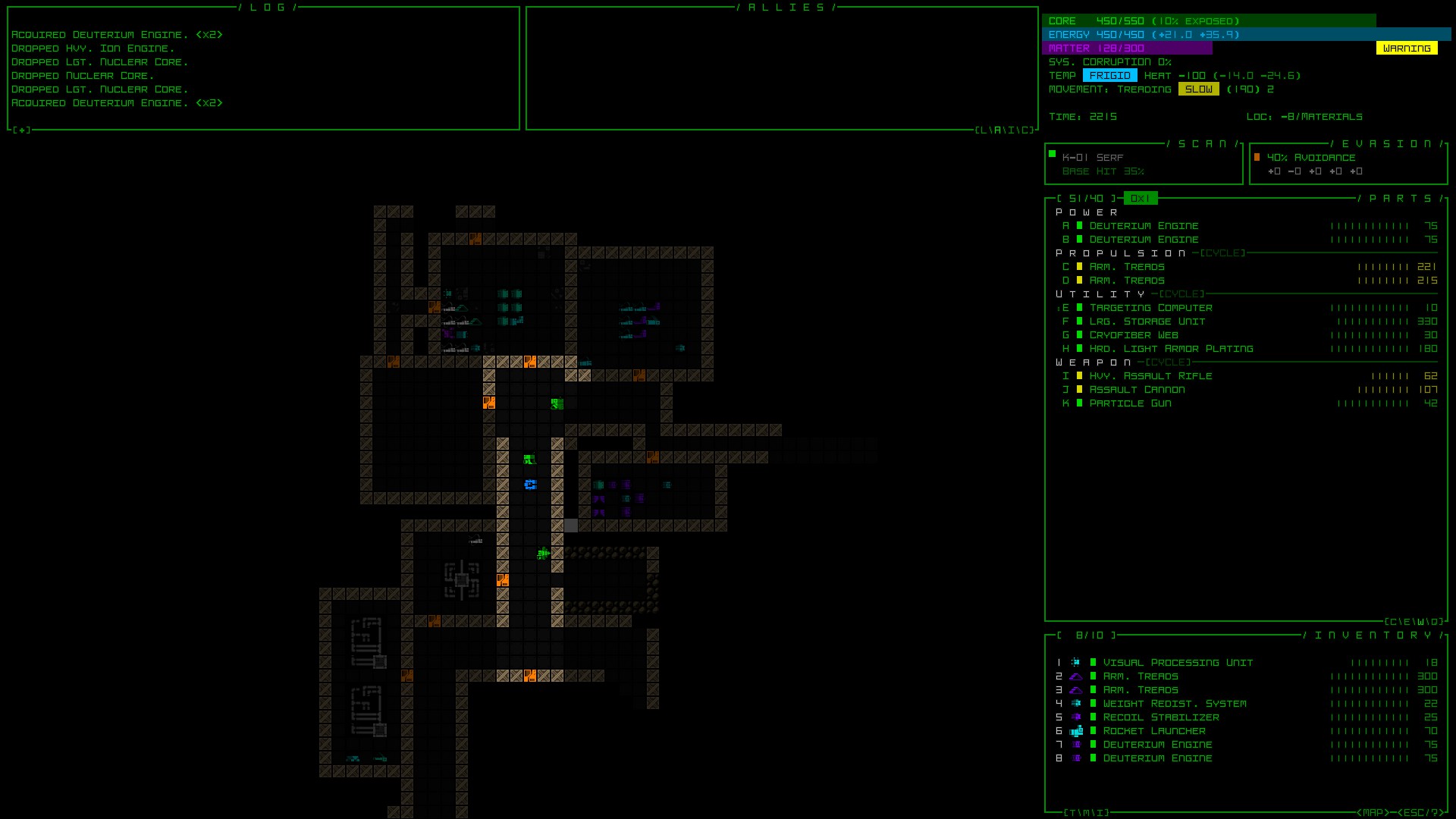 Building yourself for stealth, hacking, speed or power or even utility will guide you gently down multiple development and equipment paths, though the way the game is structured you can adapt on the fly thanks to the way you can literally bolt items onto your core within seconds, if you have the elements to hand you can switch from hover-bot to tank-bot right away and then unleash merry hell. If you stay quiet and keep the security level low, however, you may be able to keep the garrisons from spawning masses of enemy bots, but on the same token, enemy bots equate to sweet loot, if you think you can take them out.

This is a game that has, through Alpha development, been very clear about what it wants, that vision has served it well and it’s very much on a par with a lot of the stronger nethacks that exist in the genre.  When it hits the wider audience I suspect it might have to make one or two minor concessions in the name of being accessible to the audience at large, chief among those pertains to the core.  Whilst I appreciate the desire to “hard reset” the core to factory zero every time you restart, this also serves to drastically limit your early game options and makes the initial experience very much subject to the lords of the loot drops.  In short, this is because you can only mount one power core, two utilities, two propulsions and two weapons, so you’d best pray you draw good enough items on each to keep you good for the first areas.  Being disarmed is a very realistic prospect if you get swarmed by pests or even a few mercenaries in the opening areas. 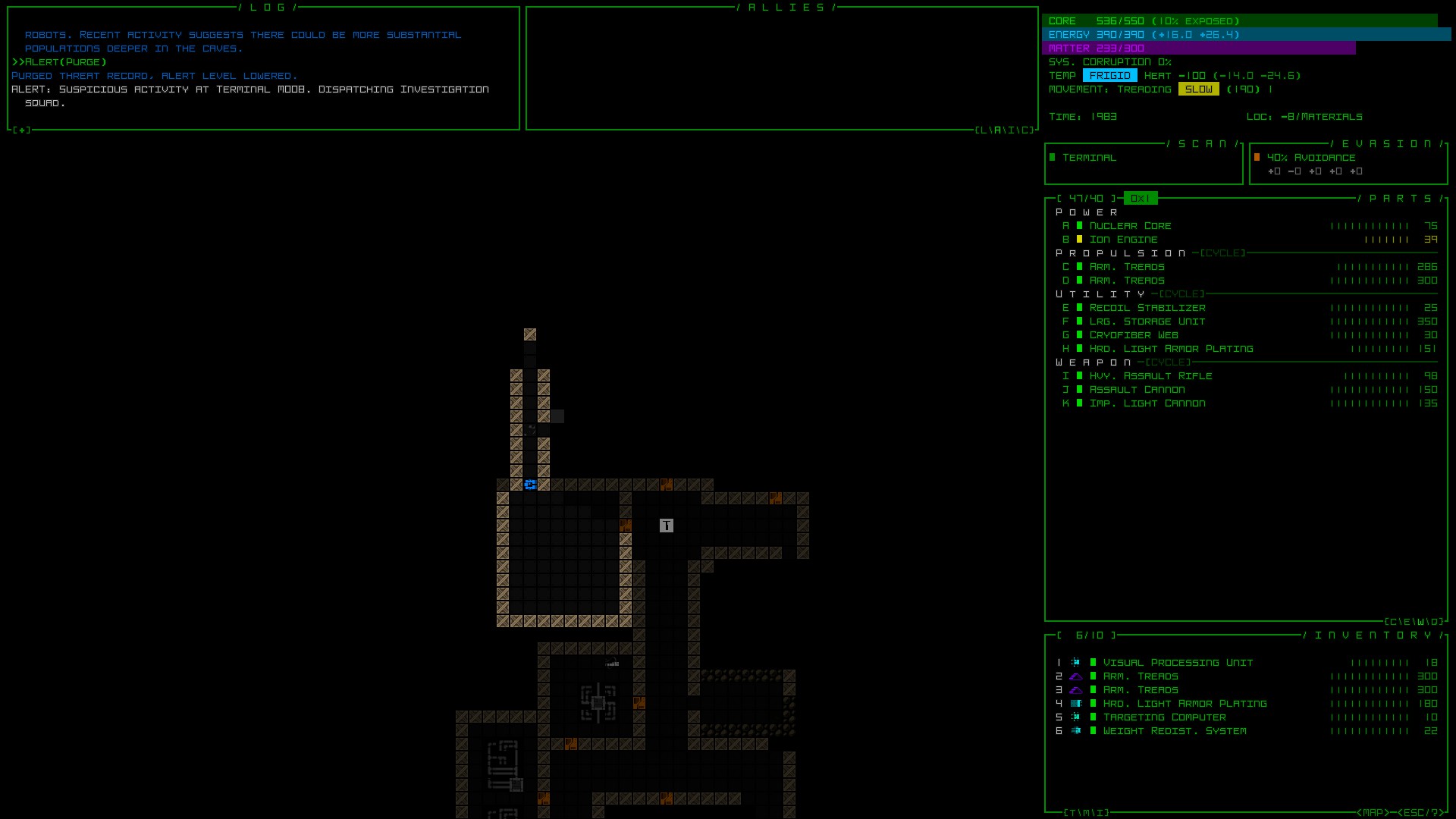 My suggestion here is simple, allow players an option to retain their core evolution levels equivalent to their best run minus one. If that means they’ve got to the point they had a level three core, from every game forward, they get to start with a level two core (and upon passing an area which had been achieved previously, the player gets one evolution point instead of two) – this would make the opening areas a lot easier to contend with and would allow players to test different strategies right from the get-go. This way players can get the hang of different builds, can push further into the mazes with a bit more confidence, and not suffer the early game whims of the RNG quite so drastically.

Sound and graphics are what one expects for a Nethack, they’re fine, what matters here is the overall theme which is gorgeous, the presentation is consistent and dripping with care and consideration right down to the atomic level. Neutral bots all have their own jobs (such as serfs which perform menial polishing and engineers which rebuild walls right after you’ve blown an area into rubble), and even though everyone is represented by the effective equivalent of an ASCII character, you get to know and understand every single model of robot wandering the complex, what they do, why they exist, and how they fit into the ecosystem (Technicians are the bane of any information seekers life). 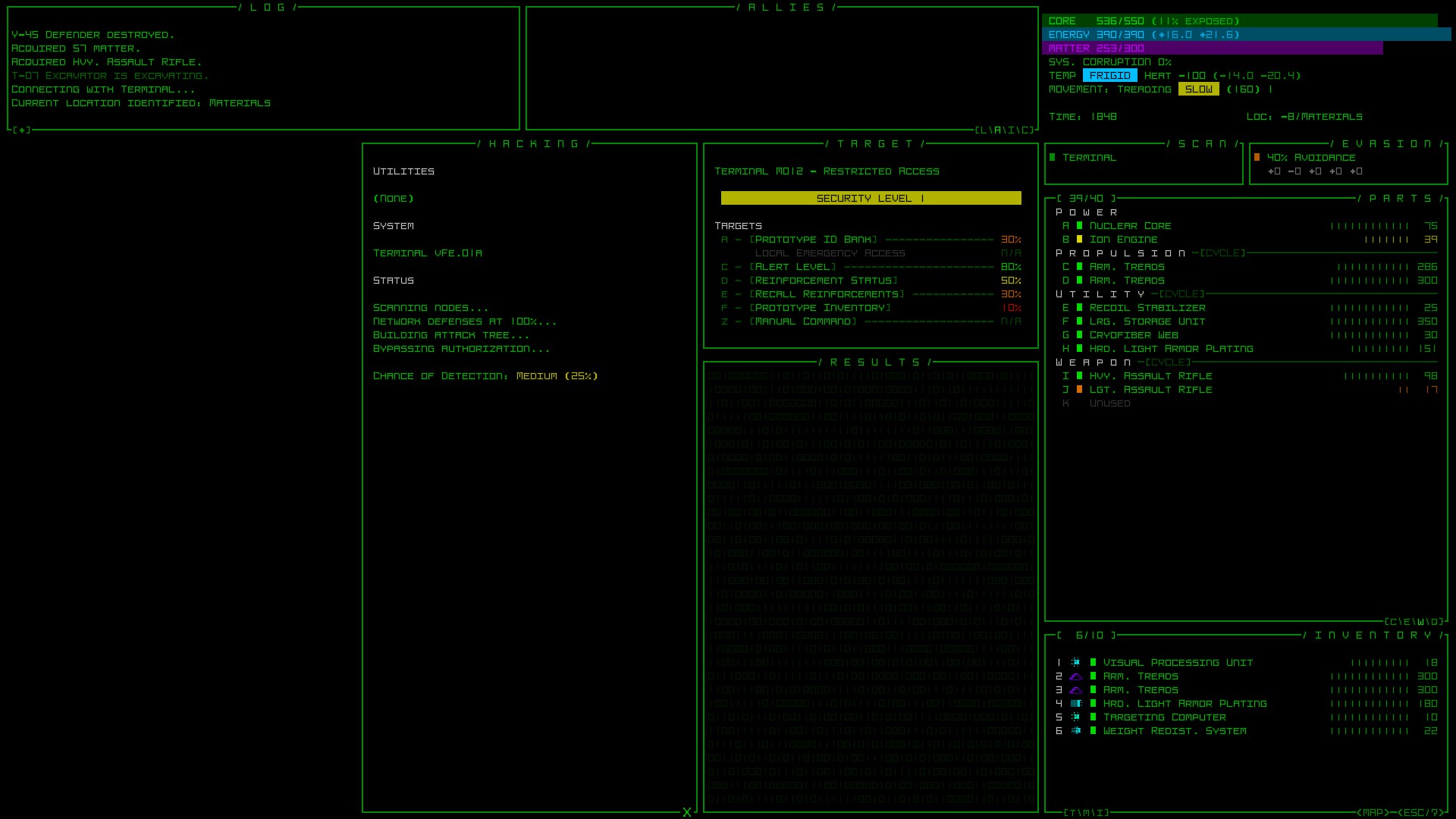 This game demands a lot, the manual is in game and whilst it states “Don’t read all of it right away”, I’d probably suggest reading -some- of it, because whilst this is very much a Nethack in heart and soul, it’s also been plated in metal and given guns, ranged combat is order of the day, and you’ll be thinking in machine terms such as temperature and cooling (use those heat sinks FOR THE LOVE OF DEITIES) as well as armour and coverage of the core. There’s even a Tactical HUD which provides a vastly improved level of information for people who want to dive in deeper and get to know all the nuts and bolts of what is going on. This game might demand much, but it gives much in return.

It is not, however, a game for everyone – For people who are looking for a sci-fi Nethack, or have memories of Quazatron or similar, they’ve probably already bought it, or are looking at it with a view to buying it. If you’re in that category, then this is possibly the easiest purchase you’ll make.