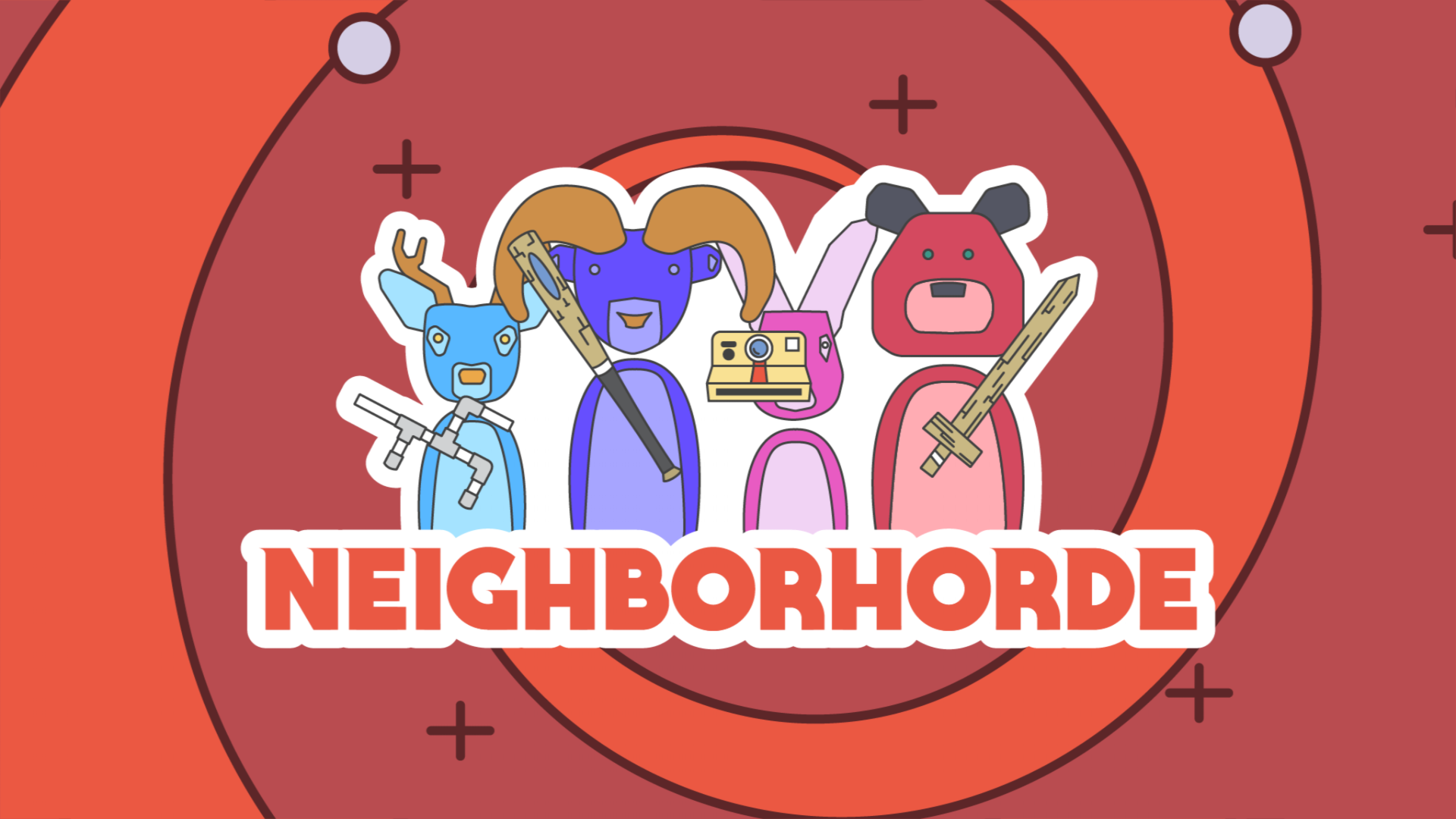 Neighborhorde is a fun co-op shooter, perfect for either your famous couch parties or the lonely nights you like to spend behind your computer.

In Neighborhorde, up to four players are able to fight against some monsters that are trying to kill everyone and destroy the neighbourhood. If you don’t have any friends who would want to play the game with you, you can play with bots, which are quite comparable to a human player.

The game appears interesting from the very beginning. The catchy music starts right at the splash screen and it lets you know straight away that the gameplay is going to be exciting. Once you start playing, a fun tutorial shows all the controls and gives you some tips. At first, I was a bit disappointed since all the controls were shown for the gamepad even though I was playing with my keyboard. There should probably be some detection in place, just to see if the user has a gamepad connected or not. After messing with the settings for a bit, I was able to complete the tutorial successfully.

Although I wanted to play with my keyboard at first, I soon realized that I had to change my gaming accessory. Moving the aim with my mouse was extremely annoying because it behaved very similarly to a gamepad analogue stick – if I moved my mouse to the right, my character would be shooting to the right even if I had my mouse in the top left corner and I only moved my mouse a little. That’s why I switched to my Steam Controller and aiming proved to be much easier this way. You might want to use a different controller, though, the touch trackpad is also a bit clumsy when it comes to aiming.

The enemies come in waves and there are 15 of those in total. There are also three bosses: two are among those 15 levels and the last boss fight is the last fight of the game. Each wave is, obviously, more difficult than the last one and the game does get pretty hard as you approach the 15th wave. For every wave you survive, you get a certain amount of tickets (the number of those also increases), which you can later spend in the shop on a variety of items: new characters, cosmetic items, and different maps. 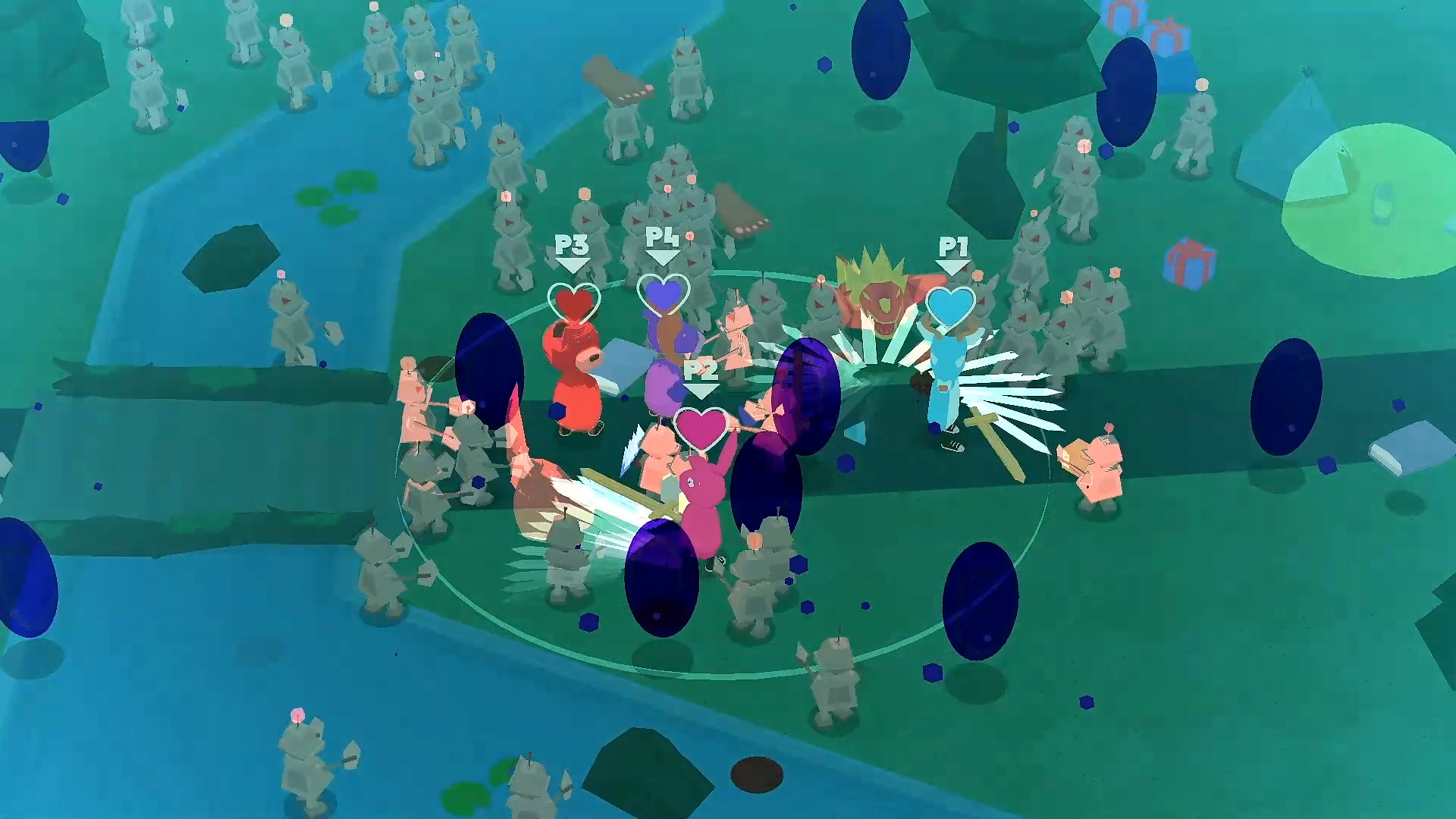 The graphics in Neighborhorde are very cartoonish. The colours are all very basic and it’s easy to see the enemies and their attacks. A common problem in games with tons of enemies is that after a while you don’t even know where you are anymore. This is usually not a problem in this game. The animations are also well made; I like how different weapons have different effects on the enemies, both physical and visual.

Since you are playing as a regular neighbourhood guy in a cartoon-like game, your weapons are not your usual video game weapons. You don’t have shotguns, badass katanas, and rocket launchers, but you do have cymbals, toasters, bubble gum, wooden swords, and squeaky hammers, to list just a few. There are really a lot of different weapons and it’s a lot of fun trying them all out and finding all kinds of weird effects they have. The trumpet, for example, emits sound waves which knock the enemies away from you and deal some damage to them as well.

You get to choose a new weapon after every second wave. When you choose a weapon, there is a chance that one of the gifts falling from the sky will contain this weapon. To clarify the whole gifts-falling-from-the-sky situation: the only way to get more ammo or to get a different weapon is by picking up one of the gifts that fall from the sky all the time across the map. If you pick up the same weapon you are currently holding, you are simply given more ammo, otherwise you switch the current weapon with the new one.

After every other second wave, you can choose a so-called superpower: an ability that gives you an advantage in one way or another. There are three powers to choose from and those change every time you are given a choice. There are many different powers to choose from and there is usually at least one that helps you in the current situation and fits your style of playing as well (if you like using melee weapons, a power-up to every melee weapon is certainly a good option). 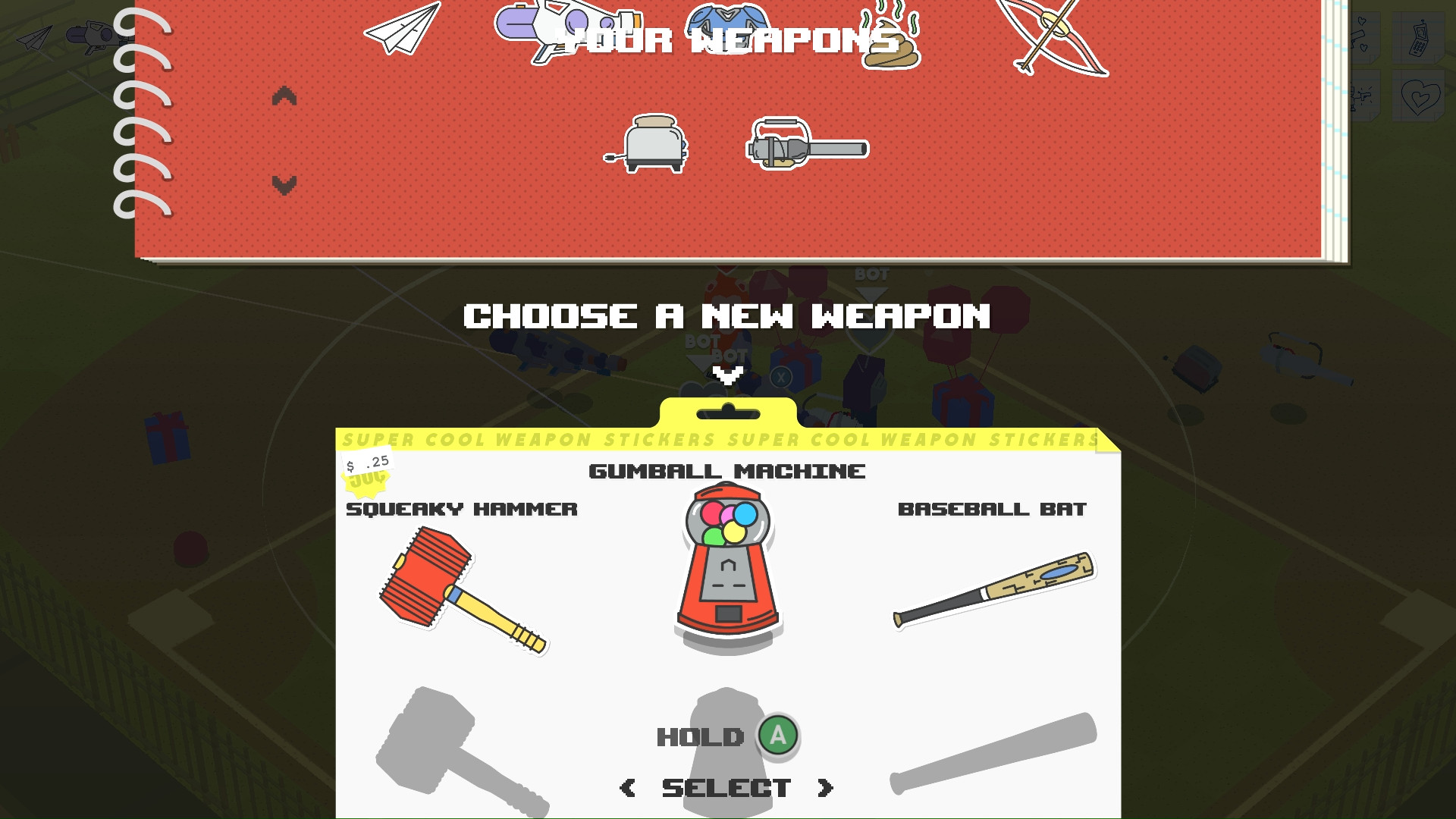 To make sure that the four players cooperate, the game uses a so-called “friend zone” to encourage players to stick together. When the players are all close to each other, a circle appears around them. When all players are inside this circle, they receive a certain amount of health every second. When one of the players steps outside the area, the circle disappears and reappears when the players get close to each other again. Also, when one of the players dies, the only way to resurrect them is to stand in a much smaller circle around their corpse and wait for a few seconds.

If the game is too hard for you or if you’re only looking for some casual fun, there is also an easy mode available, which can be beaten much more easily. However, no tickets are granted for the waves you complete in that mode.

Overall, I really like the game. It’s never boring and you can replay you as many times as you want, especially if you want to obtain all of those fancy items in the bonus shop (you need a lot of tickets for some of those). I was playing the game with my brother a bit (sadly, I don’t know any other gaming friends nearby) and we had a lot of fun. With four people playing in a single room it would probably be even better. This is probably one of the best couch games out there so I definitely recommend it.