A slick physics puzzler with campaign, sandbox mode and workshop support. Admire your handiwork in 3D and watch your intrepid skiers reach the top or perish in horrific accidents! This is why Health and Safety is a thing.

You create your lift towers on a 2D screen using a selection of materials (planks, logs, supports, wheels etc) and then drag the cable over the wheels to the fixing point at the top of the hill and click Play. The screen switches to 3D view and you can spin it around, drag it and zoom in and out to watch as your skiers jump on the lift to hopefully get to the other end without the whole thing collapsing.

One of the best things about this game is the way the tolerance of each building item changes colour during the animation according to how much stress it’s under. You can watch an entire tower as it turns yellow and orange on one side and stays green on the other, so you can visualise where the strengths and weaknesses are. After it collapses and you’re back in 2D view, the struts that broke are shown in red, so you can see exactly where your breaking point was and do something about it. Ingenious. 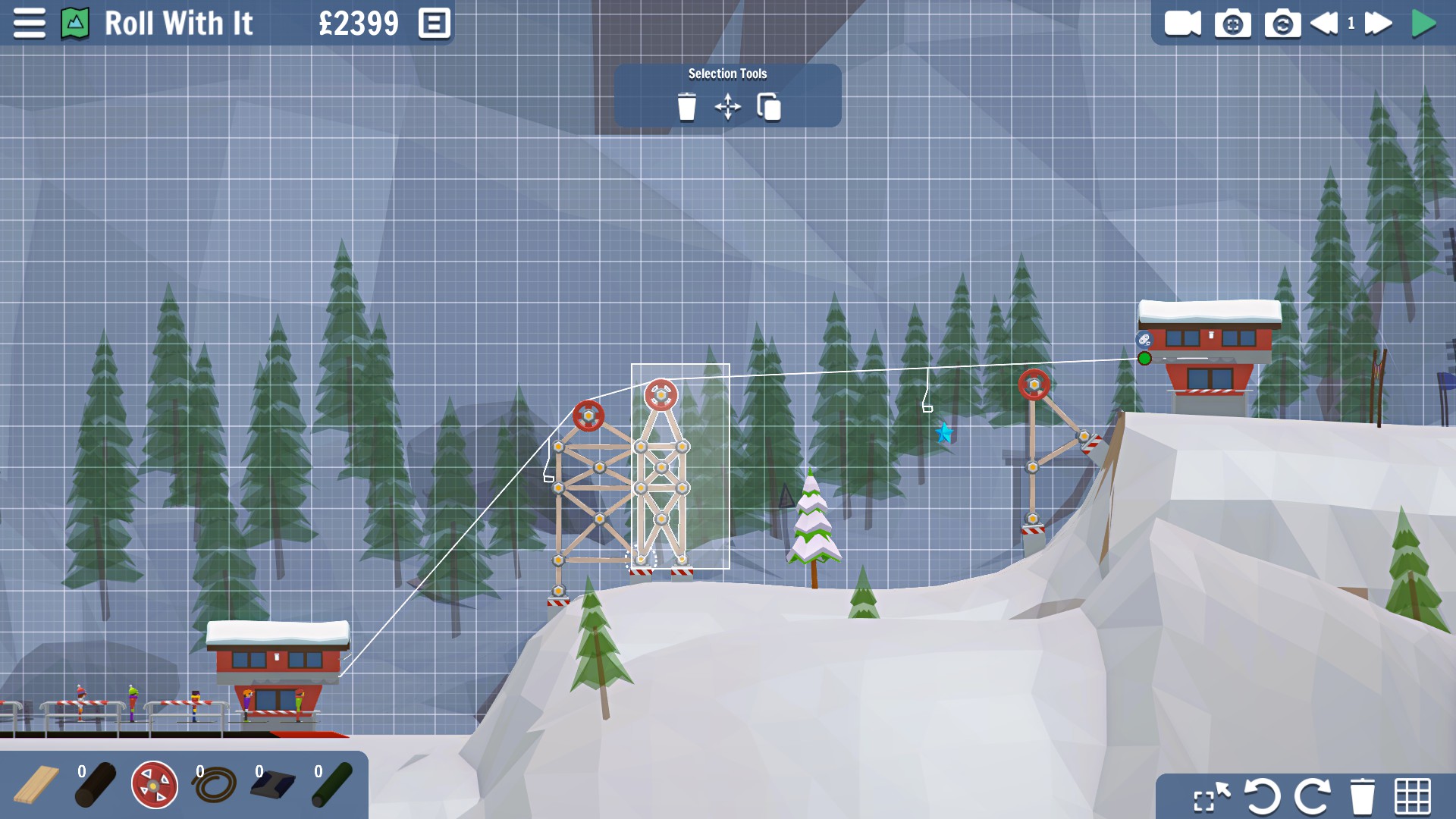 Success is measured by four factors:

On some levels you get to control the skier as he attempts to fling himself at your ski jumps. You can crouch/stand to get better take-off and if you’re clever you can do backflips. It’s way cool.

At the end of a successful level you can see where you are on the leaderboard, which is ranked according to how much cash you spent to complete the level, so it’s always important to use as few materials as you can to make the most efficient solution. 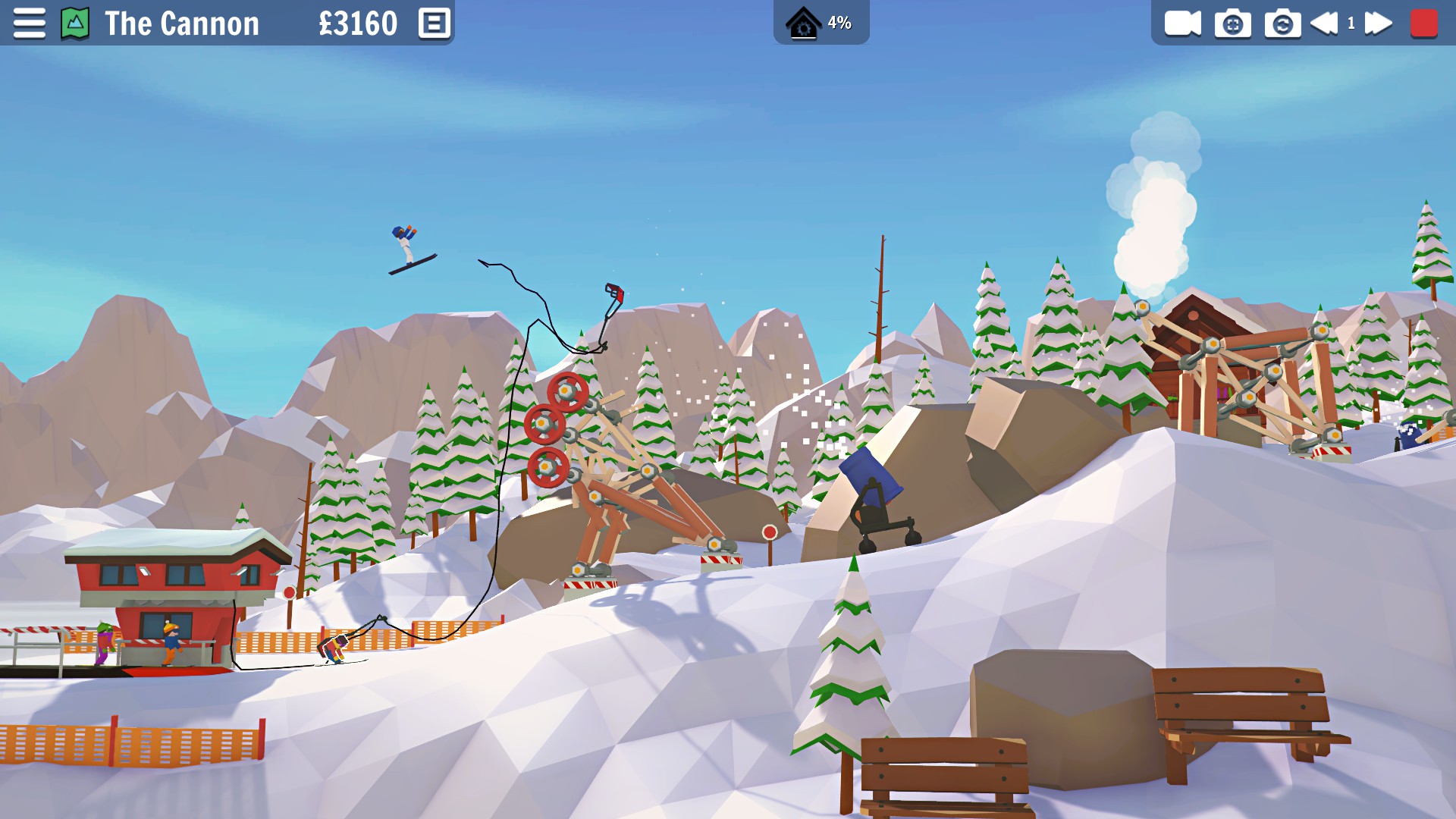 There’s cheery, relaxing ‘elevator music’ that changes now and then, and never becomes annoying. A nice accompaniment while you work. The 2D working view while you build your system allows you to drag the screen around and zoom in and out so you can focus on each part of your construction. You can switch between 2D and 3D any time, and in 3D you have total freedom of your camera to zoom, pan, rotate to get the best view of your bloodbath… I mean happy skiers on their way to their next run. 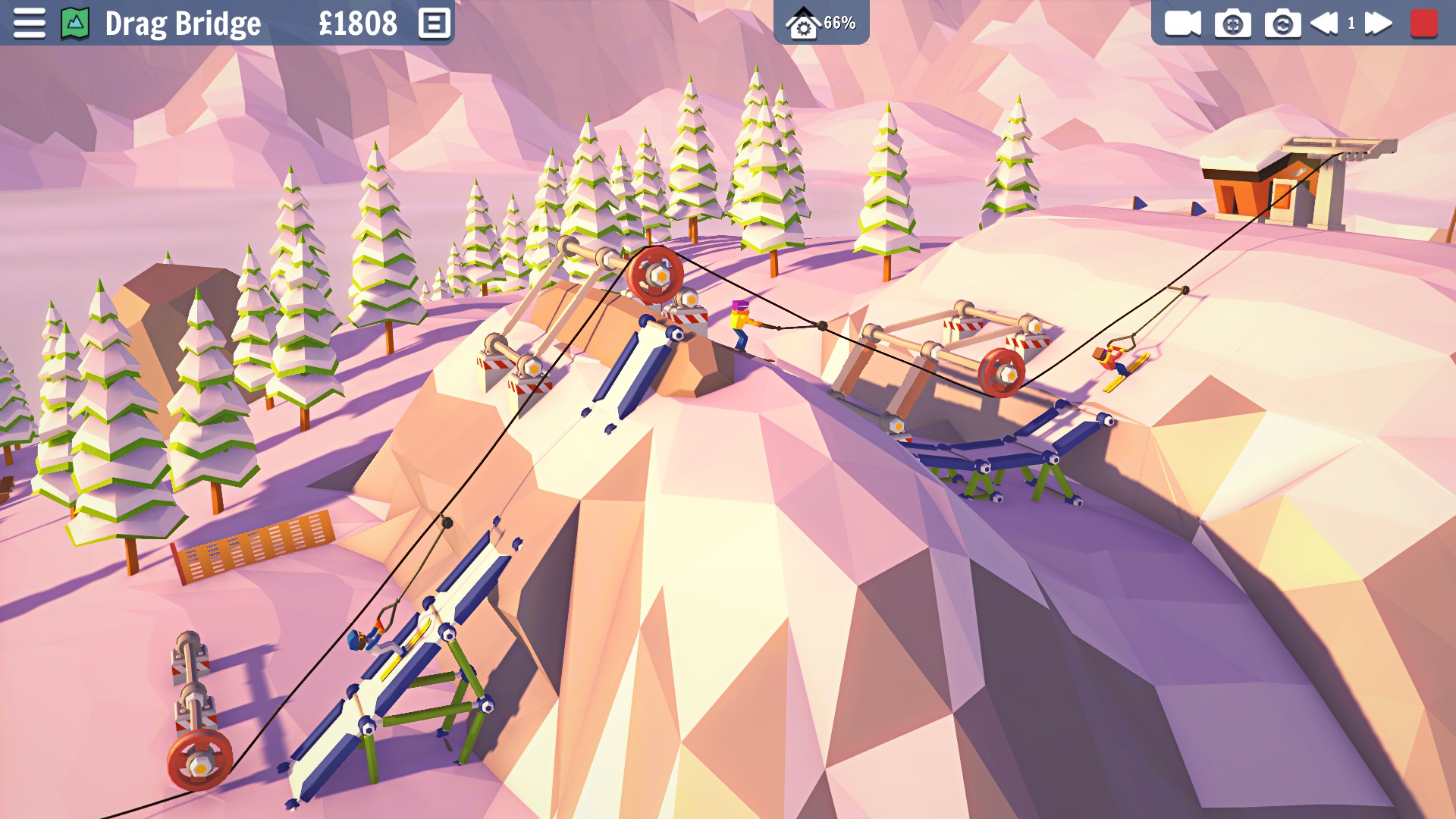 The devs have made good use of all the Steam options here. There’s achievements, Leaderboards and Workshop/Level editor. No Steam Cloud mentioned and I think they need to set this up, it’s especially useful for dual-booters like me. Win and Mac are officially supported and I happen to know that Linux is on the way because Jonny asked me to test it for him.

The first mountain area (of 3, and more on the way) is quite easy, and gets you into the swing of using the various materials available. After that it starts becoming very challenging and there’s a big sense of victory when you succeed. You will see your carefully constructed masterpieces collapse and crumble many times before you reach that point though. If you’re easily frustrated, give this a miss. 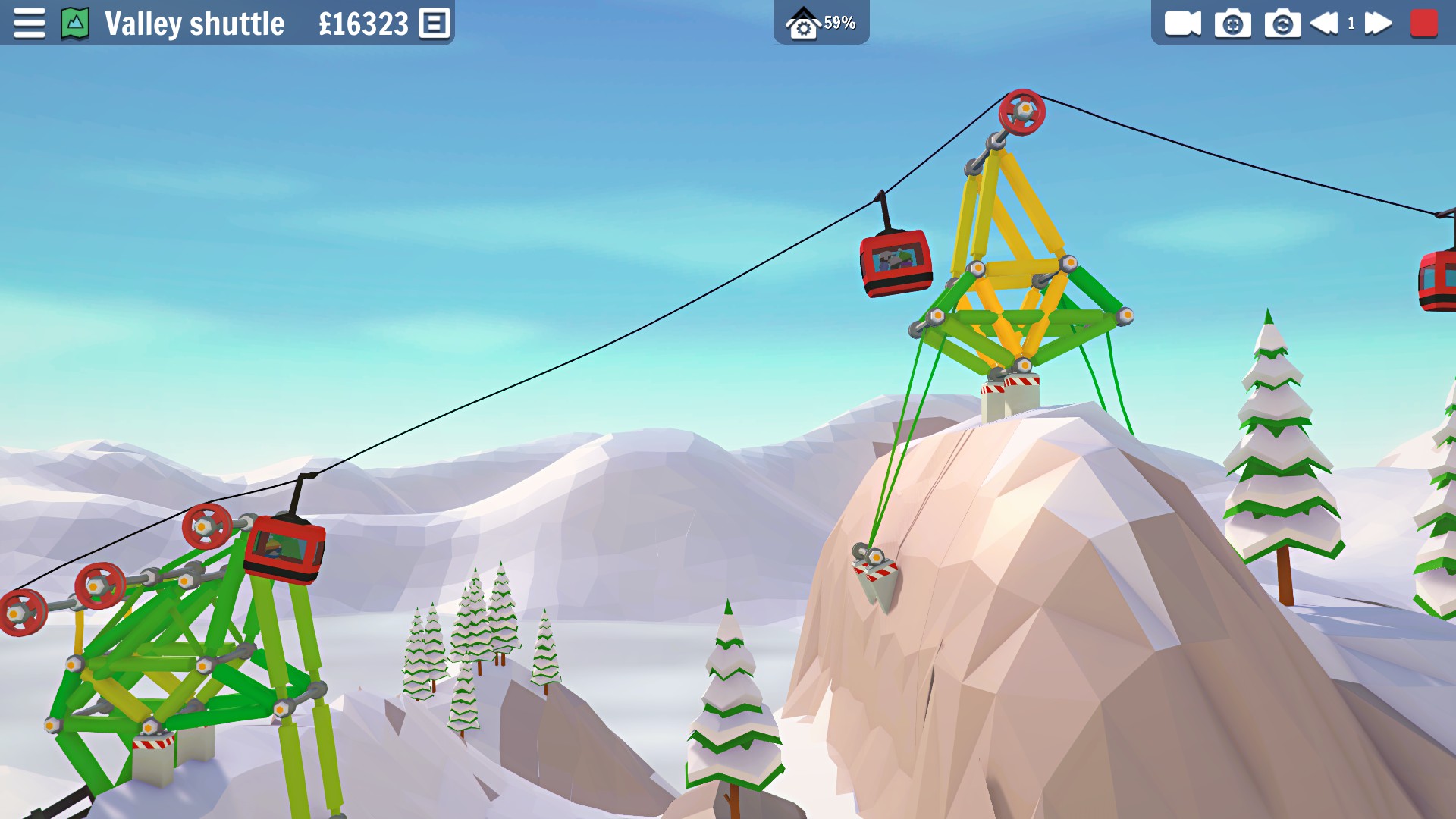 When I’m writing reviews before the release date I like to play a little game with myself and guess the price. I said US$10 for this so I wasn’t far off. You won’t be disappointed if you pay full price, the leaderboards and workshop will give you as much replay value as you can handle, and the overall quality is top notch.

The only other game of this type I’ve played is World Of Goo so I’m not sure how this compares against the several other bridge building games around these days, but I must say that Carried Away is a very satisfying puzzler in general terms. Easy to learn, hard to master, with great 3D graphics and best of all the in-game currency is good old £££Pounds Sterling£££.

If you’re wondering about the Early Access and whether to wait until later, my advice is don’t worry because this is already a great, fully functional, bug-free game as far as I can tell. They’re going to add a lot more stuff later but go ahead and play it now, you won’t regret it. 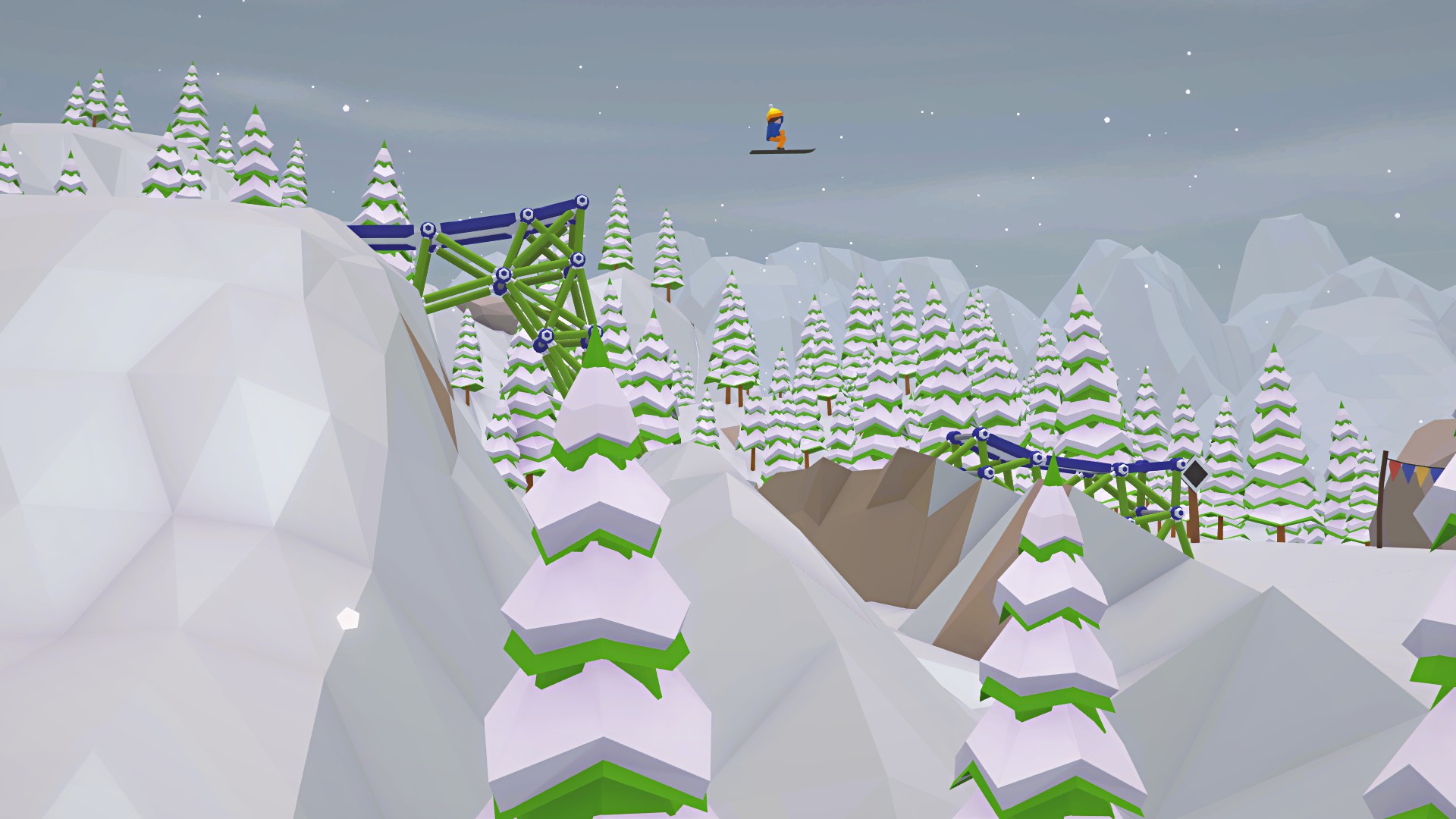