A game that does AAAAALLLLLLLL THE THINGS! A gloriously inconsistent all-you-can-eat buffet of RPG, dungeon crawling, quests, crafting, fishing(!), cartoonery, turn-based combat and probably other stuff I haven’t even discovered yet. Not to mention three different types of fancy graphics.

I have a confession to make. When I picked this game I didn’t pay all that much attention to the store page, I just thought “nice graphics and turn-based combat, I’ll have some of that!” To me, turn-based combat usually means pushing characters around on a grid with battles strung together by a storyline. Well, I got a lot more than I bargained for as all the items, menus, abilities, upgrades and miscellaneous bits and pieces showered down on me, like when you open an over-stuffed cupboard and all the toys fall on your head. 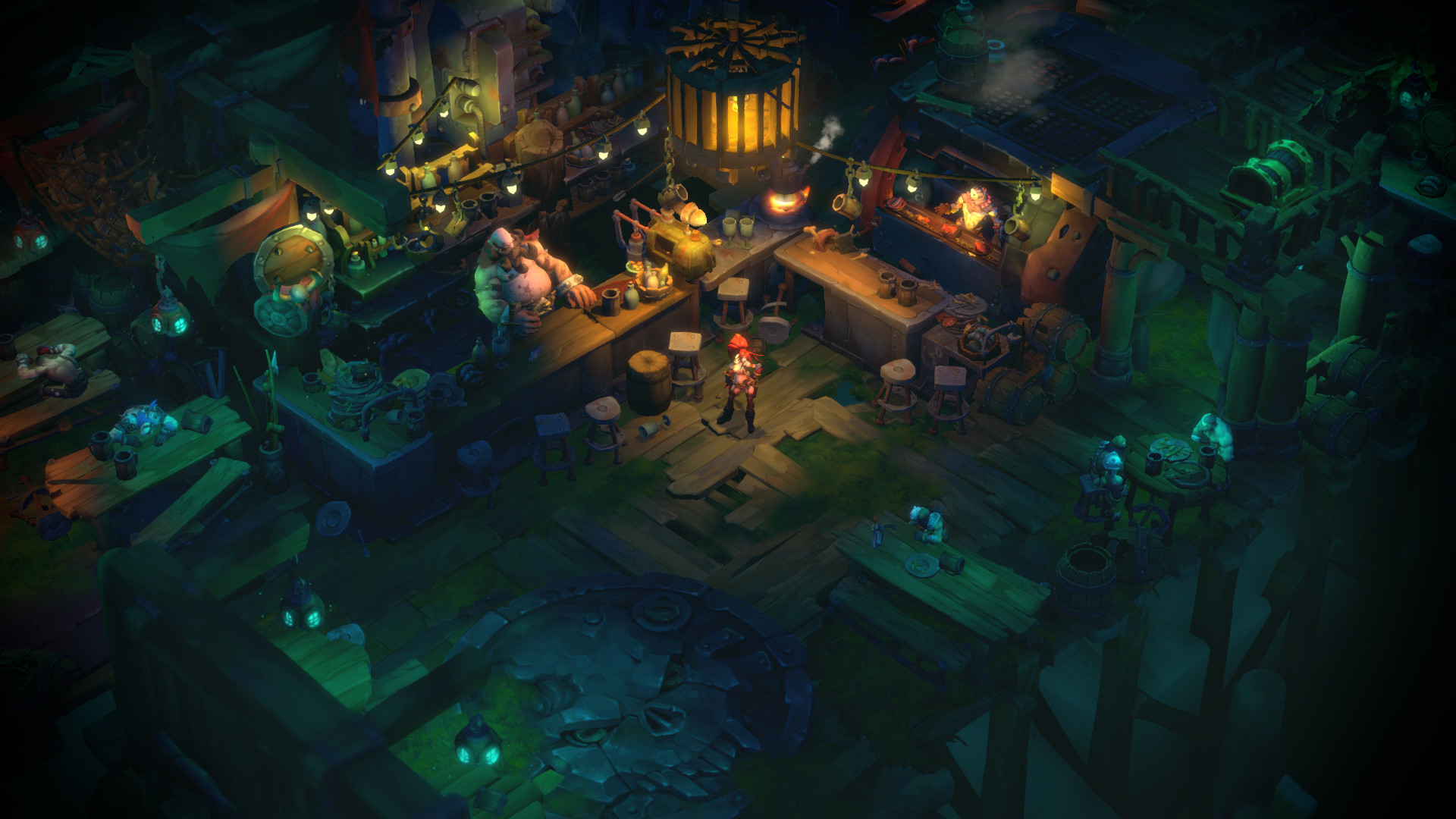 Sometimes in situations like this I’m overwhelmed and disoriented, wondering what to do next or how to progress (I’m looking at you, Stellaris) but here it was easy to dive in and make decent progress right away without worrying too much about the intricacies. All the items you collect and the weapons and abilities and everything else are there on the side, waiting for you to gradually discover and use them at your own pace. Like a child on Christmas day, it’s not necessary to play with all your toys at once, you have all year to enjoy them.

Anyway, enough of the silly analogies, I’ll try to explain how this all works. Please bear with me because I’m a little confused just thinking about it. 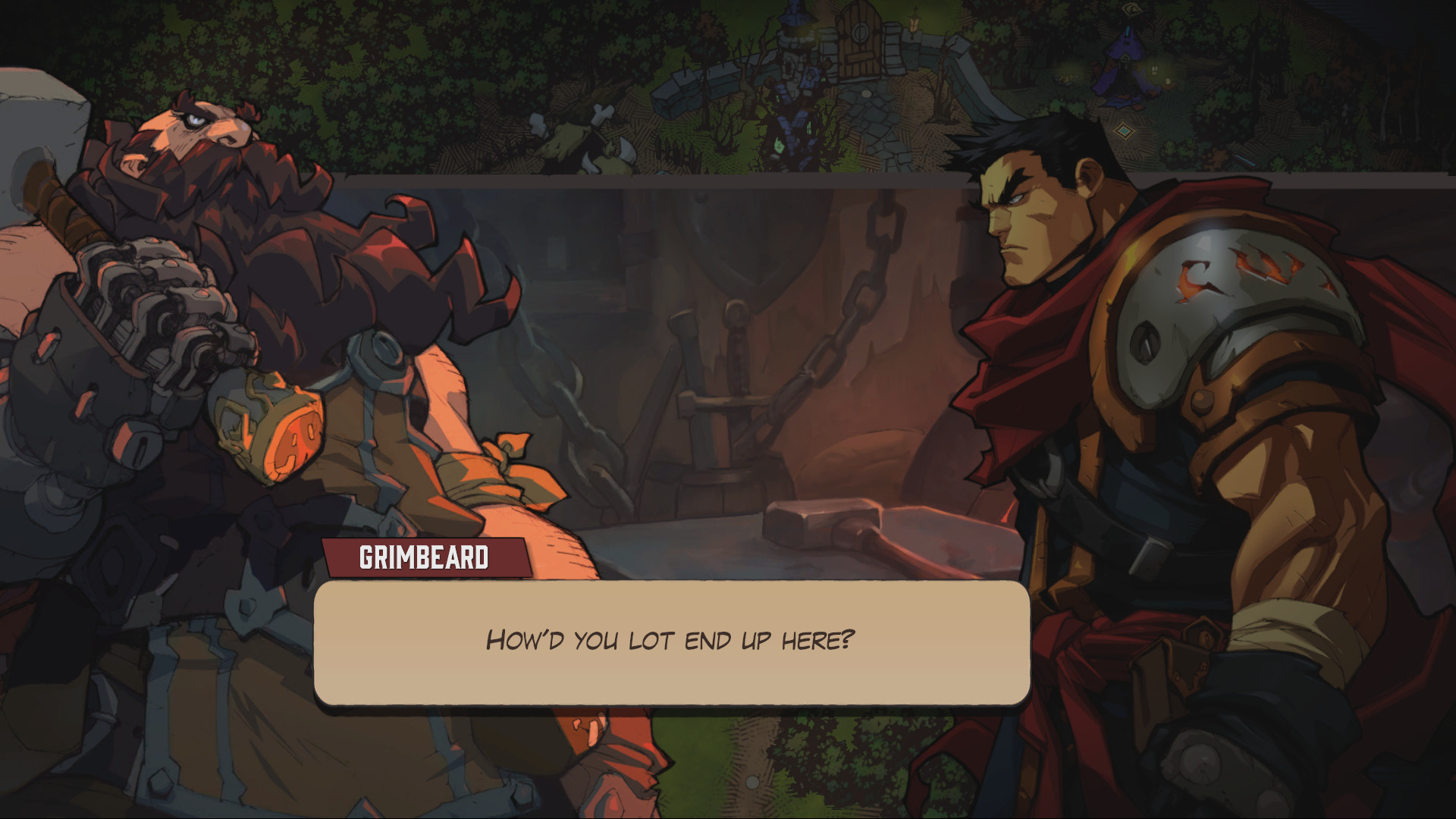 So first of all you get some cartoon animations, very professional TV-quality stuff, and these characters reappear in story-progression dialogs throughout the game, sometimes with voice acting, other times not (are they going to fill out the missing bits of voice acting later? I dunno). Then the graphics style changes (think Don’t Starve) and you’re on the main map area that’s a network of pathways connected to town areas and guarded all over the place by enemies. In the towns you can buy and sell items, upgrade weapons, craft things, talk to NPC characters who give you the quests and so forth. Then a pointer appears on the map and you follow it to your quest, battling enemies along the way to clear the paths towards your quest… or anywhere else on the map you want to visit, you don’t have to tackle your quests right away.

Eventually you’ll reach a dungeon entrance. When you enter, the graphics style changes again and you have a free-roaming 3D nicely-lit environment. Here you explore everywhere to pick up items, open chests, discover lore, do some fishing – yes, this is a thing – and decide whether or not to tackle the free-roaming enemies wandering around looking menacing. 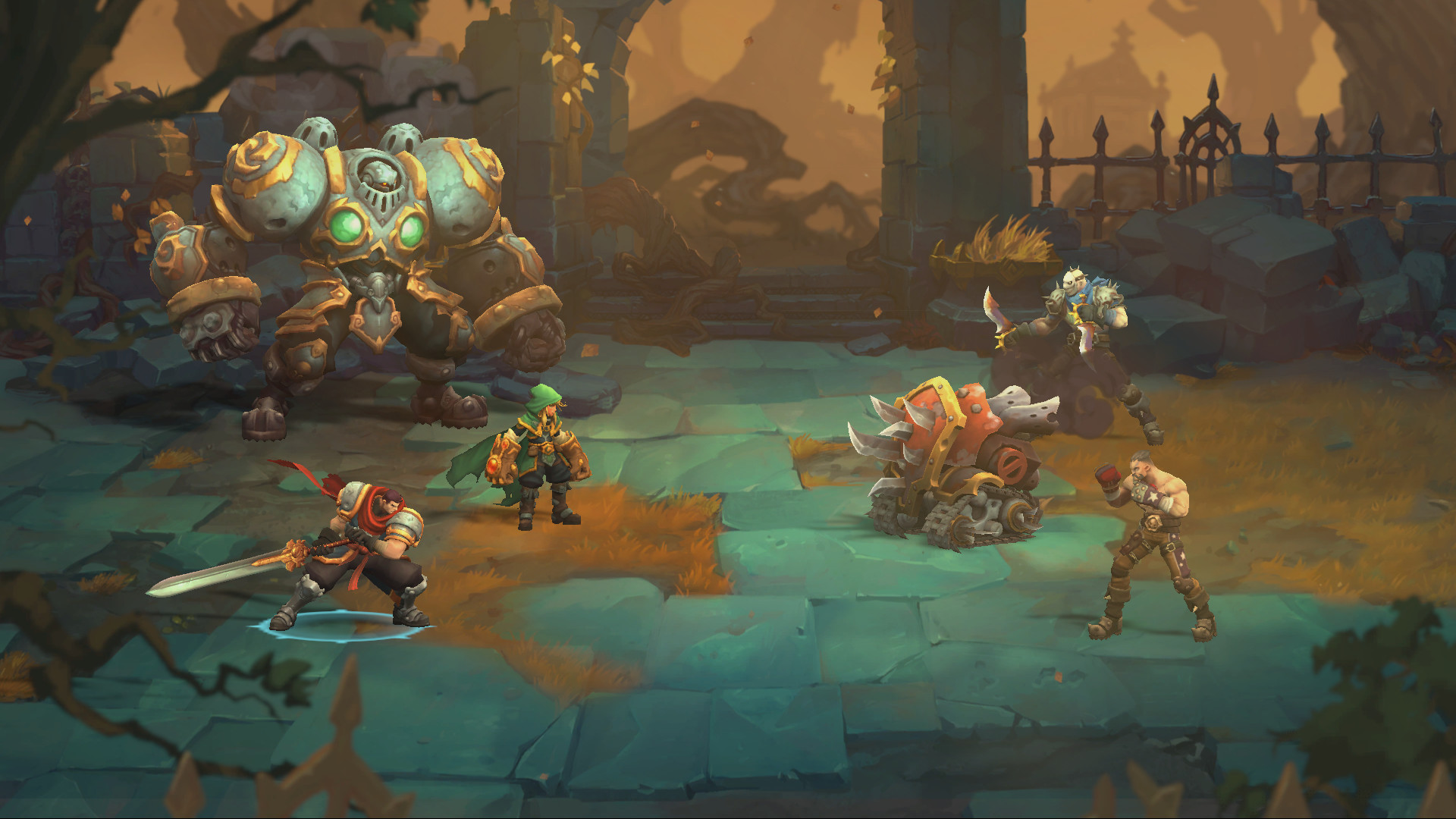 This can happen not only on the fixed pathways on the main map, but also when you bump into enemies in the dungeons. It’s like two different games but with the same combat. The graphics change yet again, you have your crew on the left and enemies on the right, beat-em-up style. This is the turn-based combat phase. Your characters have health bars and mana bars that get depleted as enemies attack them, and they don’t refill after a battle so you have to carefully ration it all. You can tell each character to use normal attacks, healing, special abilities (that use up mana) or even fleeing is an option. The attack animations are great, there’s all kinds of burning, bashing, slashing, poisoning, bleeding and fighting shenanigans going on. Once the battle is won, your characters get XP and eventually level up, giving them extra attacks and abilities. 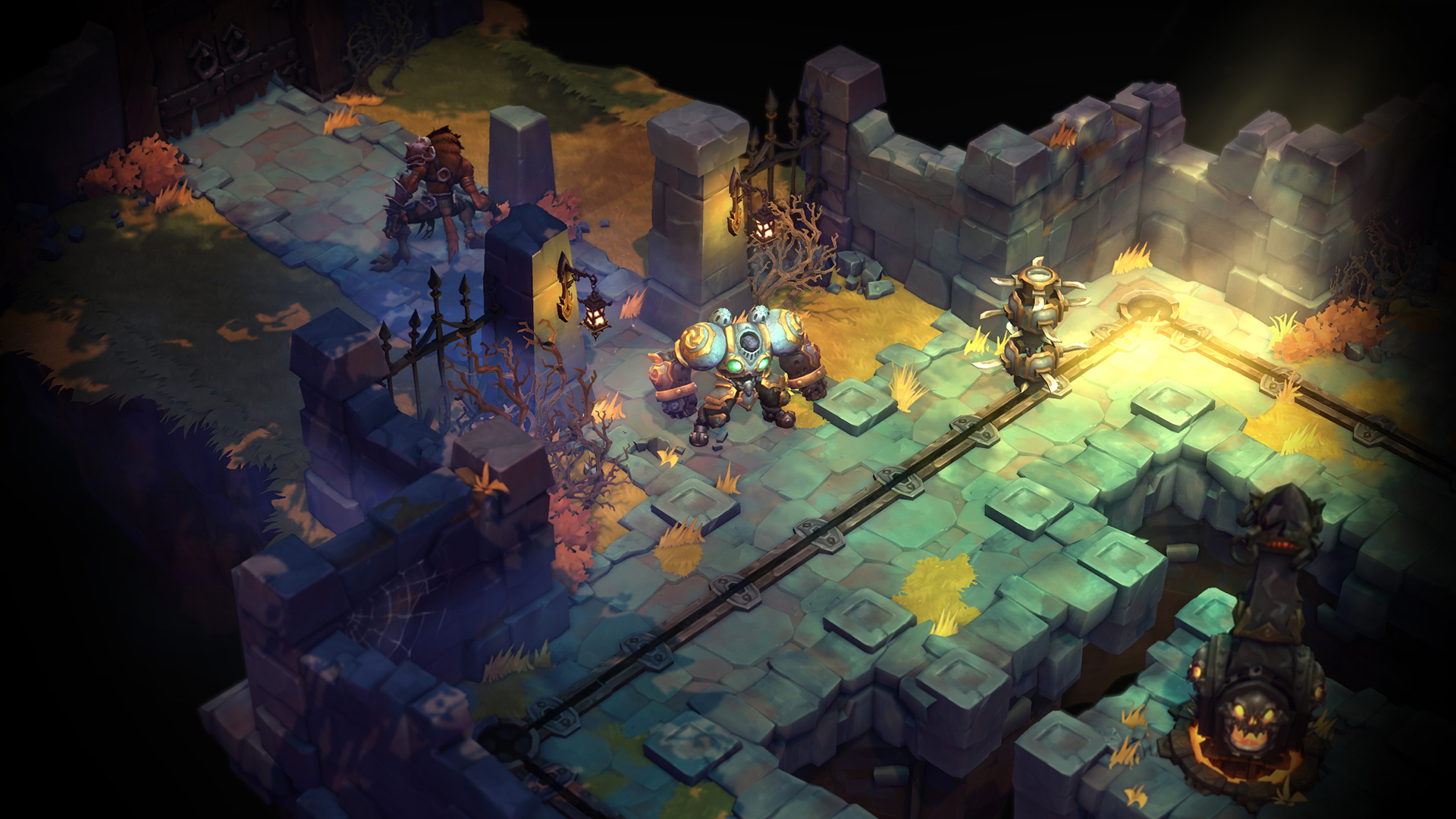 There are multiple types of graphics and they’re all fantastic. It feels a bit disjointed and chaotic with all the transitions between styles but for me this all adds to the bonkers charm of it all. You’ll certainly never accuse this game of being boring or samey, as it hurls bananas at you from the sidelines.

When you press the menu button there’s a big book with eight different tabs neatly displaying all the various stats, crafting items, quests, lore and everything else you need to know about your game progress. See, there is method to all this madness! 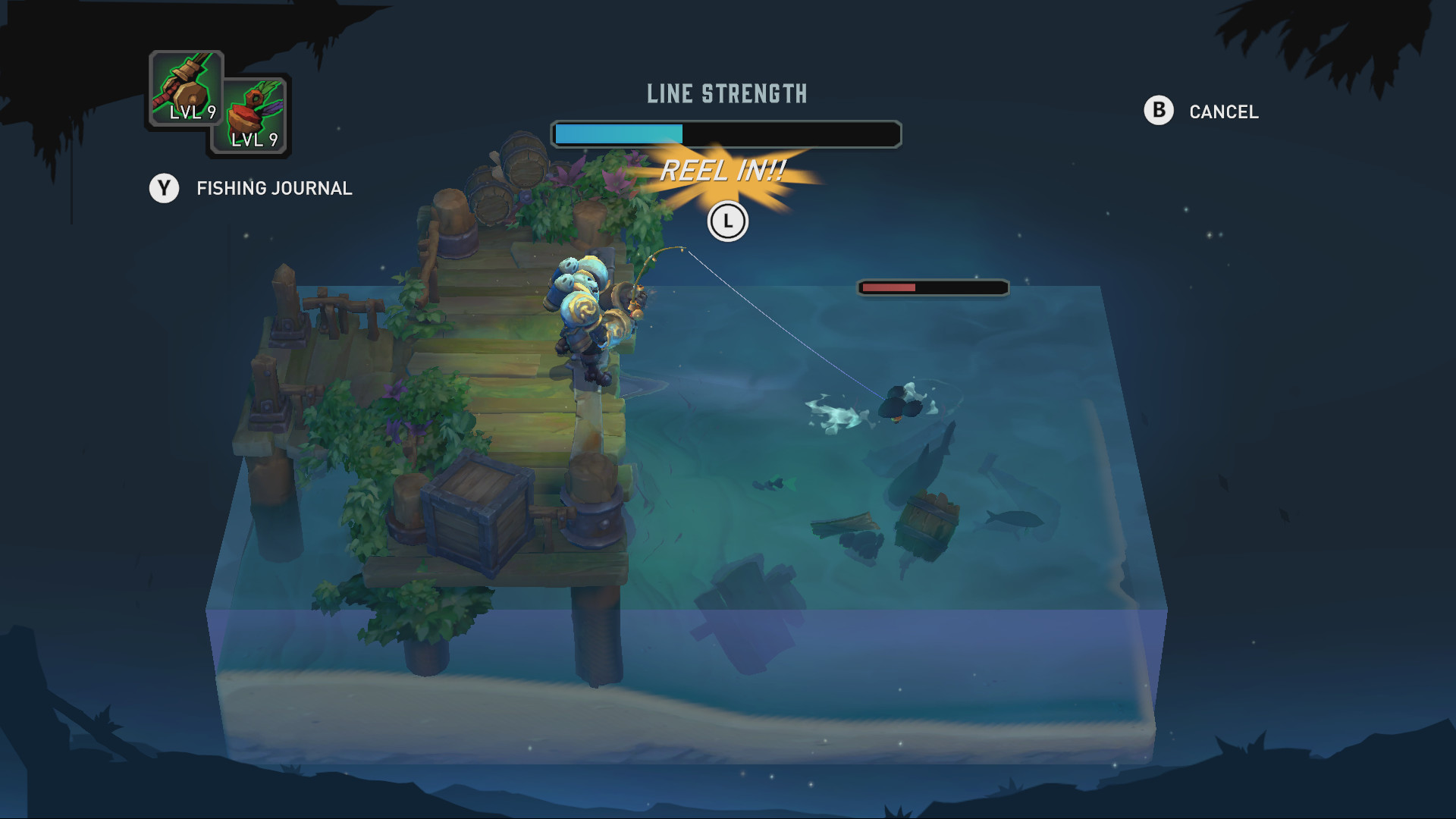 It will become difficult at some point I’m sure. The enemies are becoming tougher and I’m levelling up to meet the challenges ahead. However, I don’t think it’s the type of game where you’ll ever get stuck and not be able to progress one way or another because there are so many different avenues and methods to explore. Encounter a tough barrier? Forget it and try something else. By the time you come back to it you will have levelled up and be able to deal with it more effectively.

48 achievements – like I said, there’s plenty to get your teeth into here – Trading Cards and Steam Cloud. At time of writing, Linux support has been a yes and then a no, so not sure. More chaos haha! Love it! 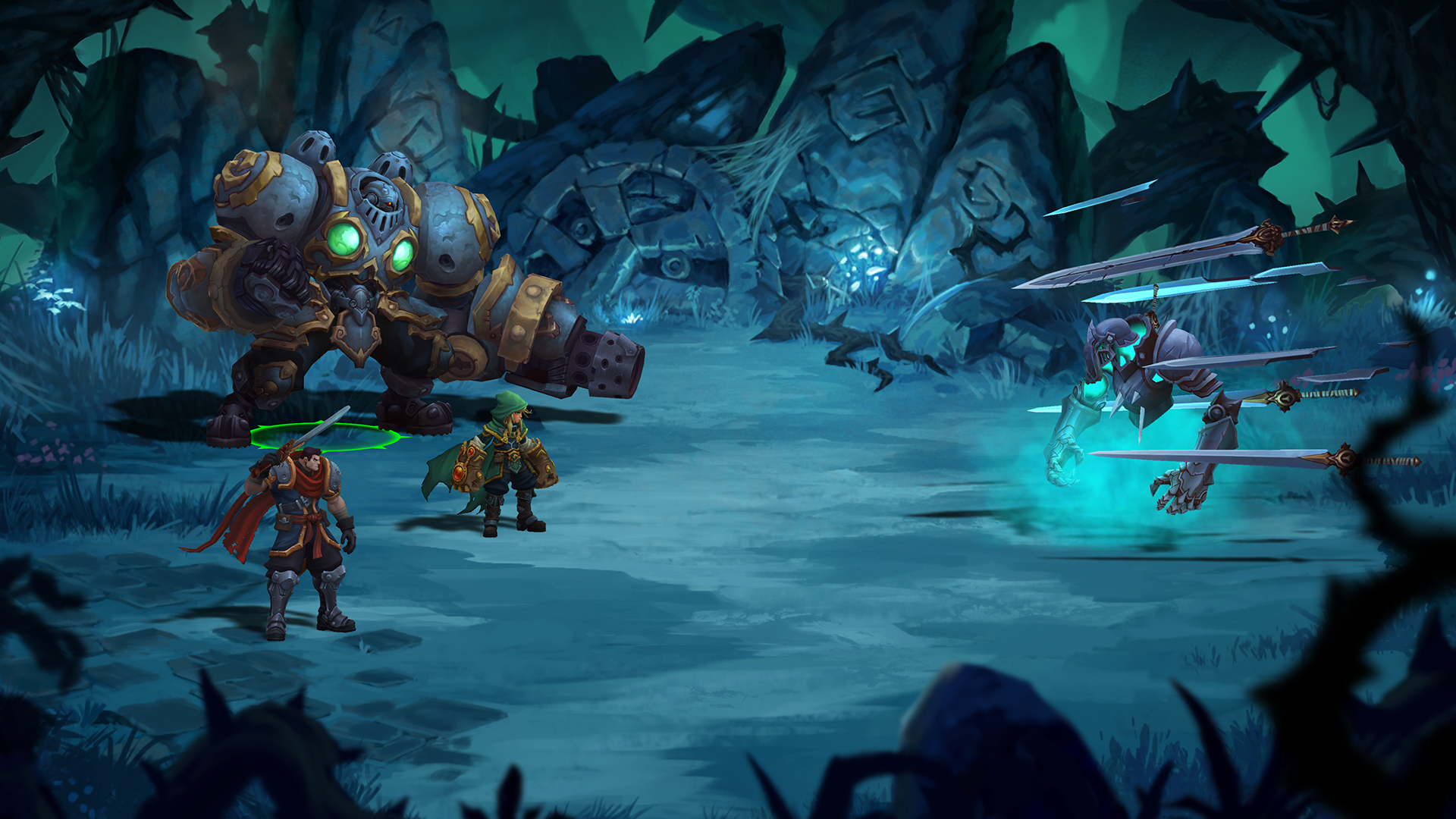 It has a pretty steep price tag but you’re getting a lot for your money. Not only is it top quality in all departments, but there so many of those departments! Whatever game genre you’re a fan of, there’s something here for you – crafting, beat-em-ups, turn-based strategy, open world discovery, you name it. It’s like several games rolled into one. I’d pay full price for it, no problem.

I’m sure that once I build up some more experience the game will eventually develop into a multi-layered objective-driven, character-levelling challenge. I have to say though, this is one of those rare occasions when I’m loving the game in the early stages before I have any real clue what I’m doing yet. It’s a lot of fun right from the start, and can only get better with time. 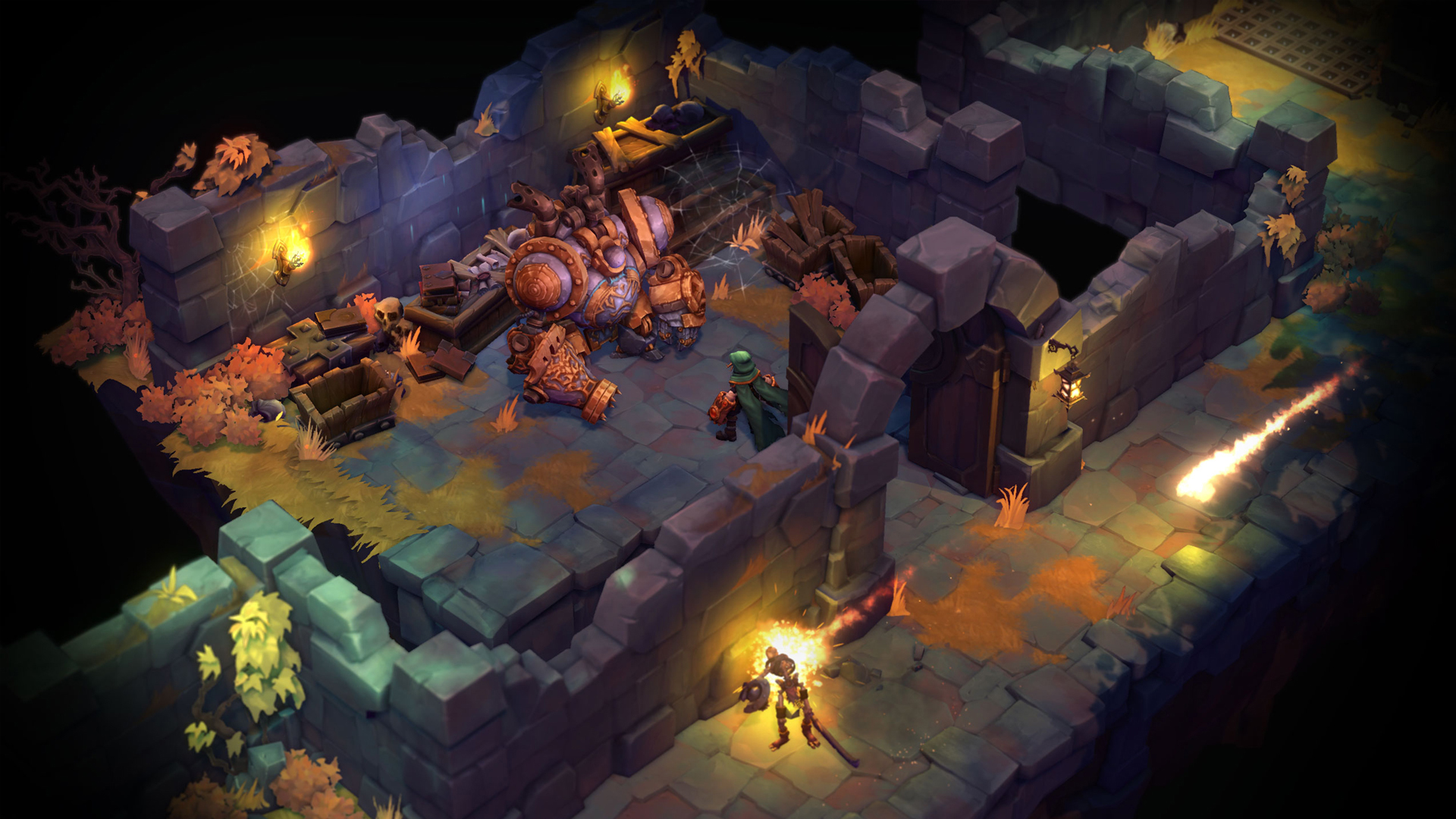