The fundamental motion in HoPiKo is the hop. More specifically, it is a straight line. The gameplay is as simple as it gets. You hop from place to place. That’s it. You can’t stay on platforms too long, as they expire and kill you after a few seconds. The screen is littered with obstacles. It’s reminiscent of the Donkey Kong Country games’ barrel obstacle courses. Like some other modern indie games, it has a very short and intense gameplay loop: you die, you die, you die, but eventually you succeed. Success happens after dozens of death, but it is always a satisfactory feeling. This is due to HoPiKo’s design choice for a death to set you back to the beginning of a set of five levels. The levels can be pretty tough, asking of you precise timing. This isn’t as annoying as it sounds because a level in HoPiKo can take less than a second to complete, and rarely lasts longer than maybe eight seconds. It is a blisteringly fast and frantic game, snapping from platform to platform, dying, then doing the same over and over. Because of that death system, the tension ramps up every recursion through the stage, until it is finally relieved at success. It’s a great dynamic. 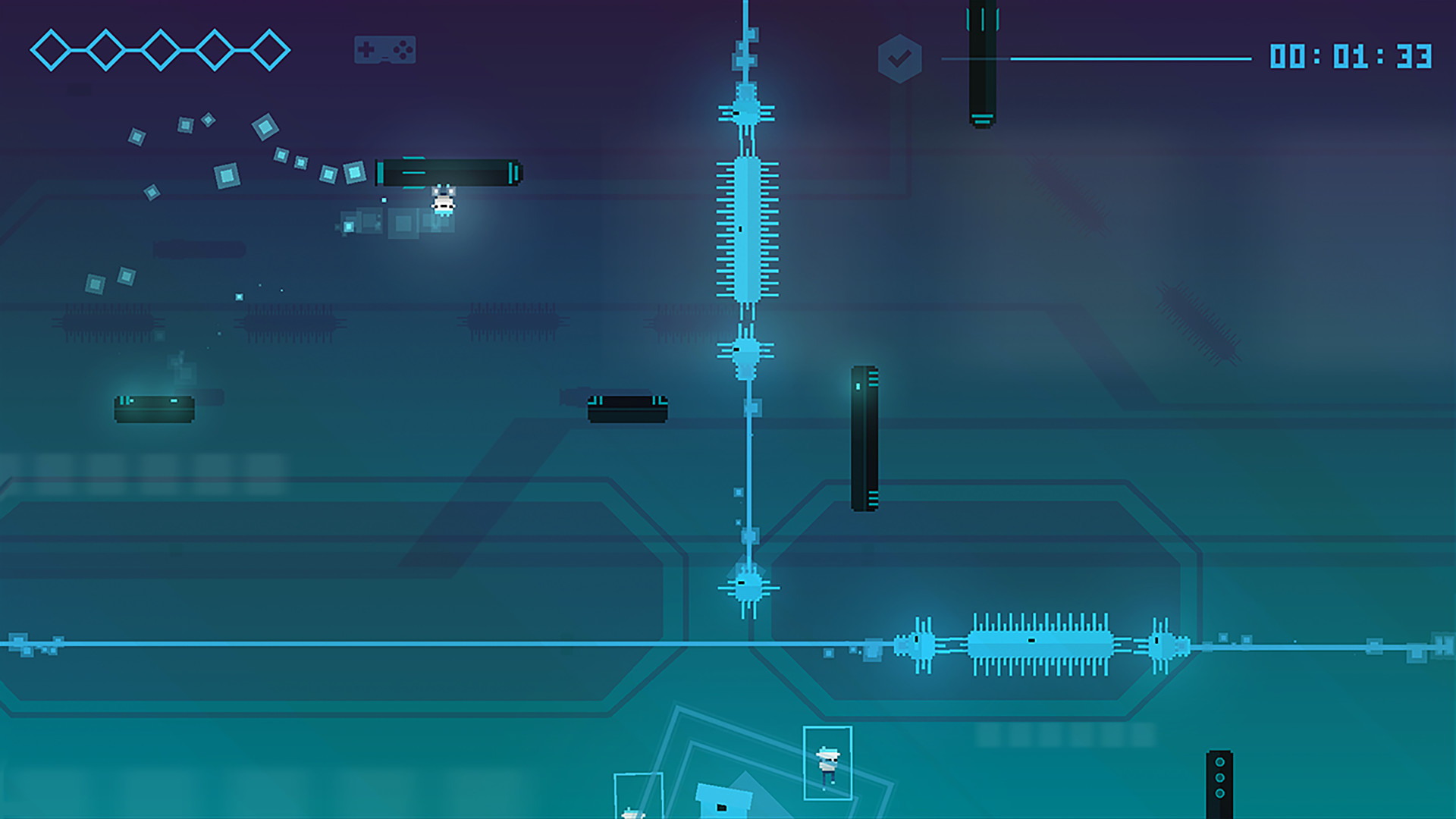 The story is something about viruses in a video game console. It’s silly and irrelevant. The visuals are basic, pixelart that changes colors every World, and occasionally changes its general aesthetics. It’s simple and direct. The sound effects are the same. The music can drone a bit, as the track only changes for every game instance & World (I think), though the music itself is good. With all this, the simplicity of the game might seem like it would peter out the excitement, but somehow, HoPiKo constantly finds ingenious ways to twist it. The game is genuinely engaging throughout. Every few stages, a new mechanic is introduced, and all of them are clever. HoPiKo constantly surprises and elates. Every mechanic added lines up with the core mechanics of the game, and each level is like a satisfying ludic haiku.

HoPiKo is a game meant to be completed 100%. It fits in with obstacle course games like Flywrench and Dustforce. There are three things: just finishing the stage, finishing each level in a set time period, and collecting an item in one of the five levels. It can be surprisingly difficult, but due to the fast reset times and the fast gameplay speed, shuttling back through the levels never feels too arduous to redo. For 100%, you unlock several gameplay modes for the World, and new audio tracks (this part is a bit silly). You get bonus levels, which function as a kind of no-brakes cart track of sorts. You also get Speedrun modes, which challenge you to beat the entire World as fast as possible, with checkpoints every five levels, and Hardcore modes, which ask you to beat the entire world without dying once. These are good incentives for completion, but nothing is as enticing for the completion as just the general thrill of success you get from the actual feat. The difficulty curve (both regarding this completionism, and regarding the general curve of the game) is so fluid that you don’t even notice it’s getting harder. 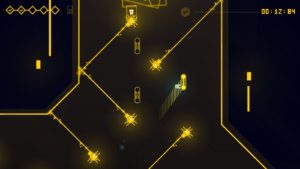 HoPiKo is a fantastic little game with a deceivingly simple structure that consistently deepens in creative and engaging ways. Currently, my only real complaint is that there isn’t a level editor; this game would fit perfectly in the Steam Workshop, Zipping back and forth between platforms in these levels is addictive and satisfying. This is a perfect game for completionists and those who love skill-challenges. 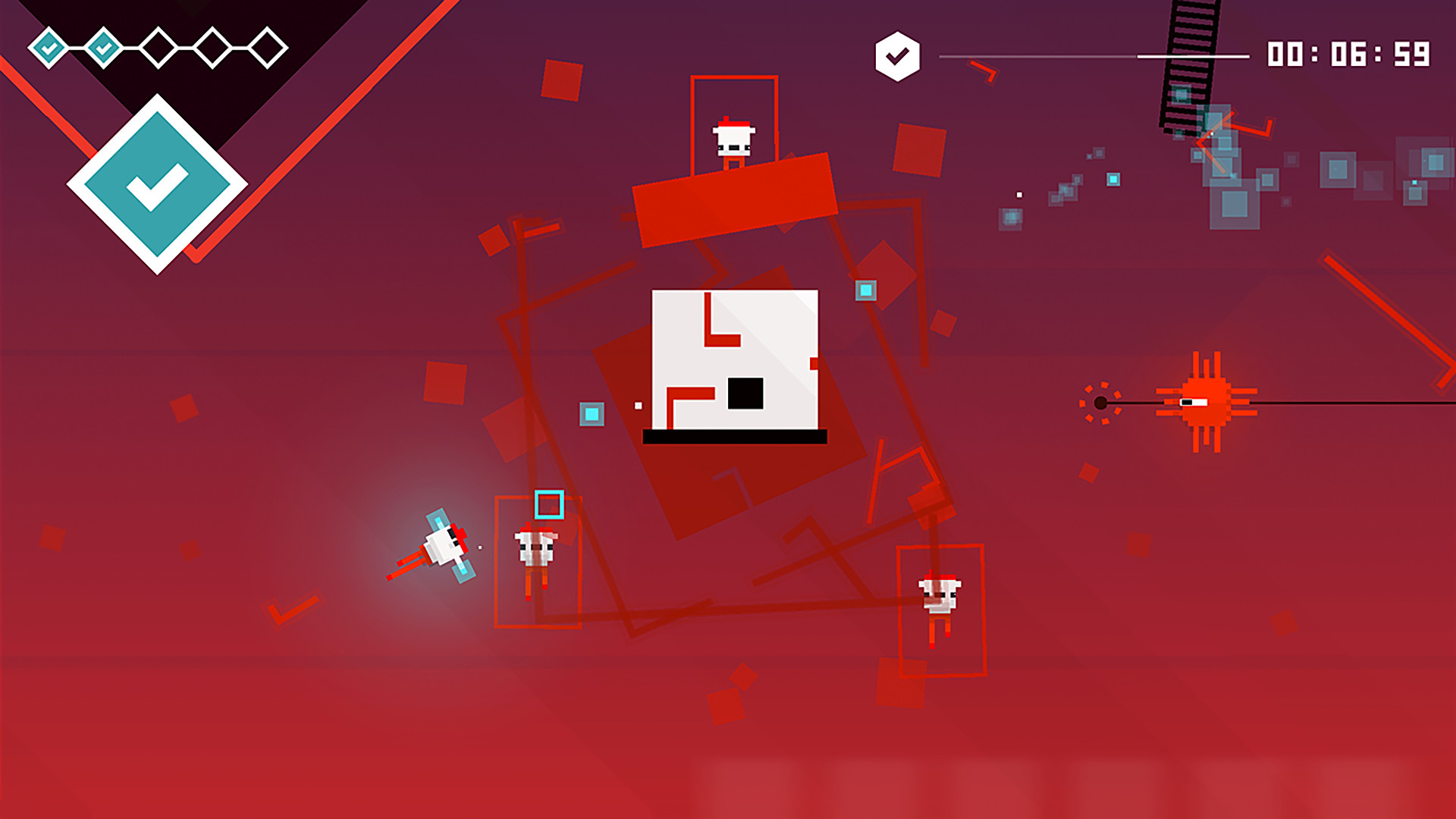